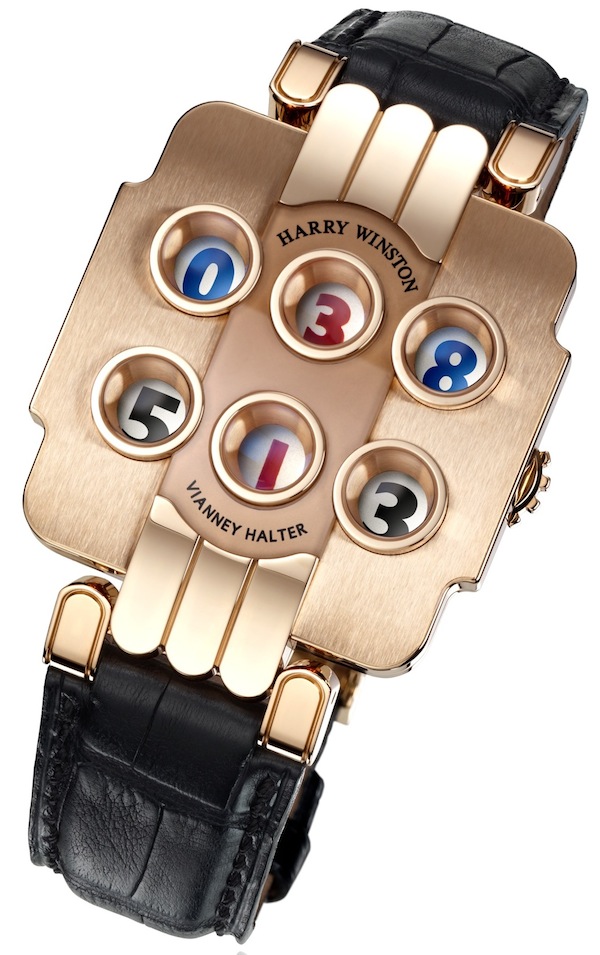 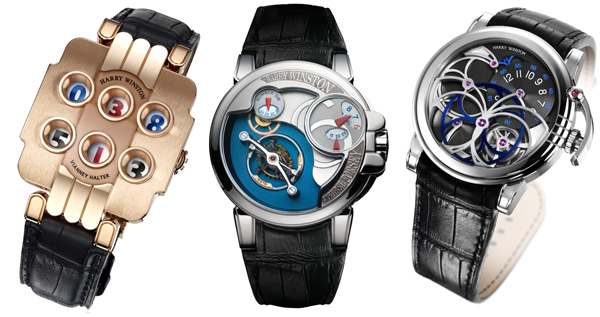 On May 30th, 2012 Christie’s auction house in Hong Kong was host to the latest installment in their “Important Watches” auction series (which included a ton of watches). While this auction featured much of the normal fare from Panerai and Rolex, the main call for interest was an unparallelled representation of the Harry Winston Opus line. We have written of the Opus line in the past, but for those not in the know Opus is essentially a distinct line of Harry Winston timepieces which have been created in a collaborative partnership between Harry Winston and many of modern Horology’s most talented independent watch makers. The concept behind the Opus collection comes from the powerhouse mind of Max Busser who ran Harry Winston’s watch division before founding MB&F in 2004/2005. Harry Winston works with one independent watch maker per year to produce a limited edition watch which is then announced into the fan fare of BaselWorld. Though when the watches are actually released to customers is another story.

Last week’s Hong Kong auction saw Christie’s offer an unprecedented selection of the Opus catalog, including Opus 1 through 7 and Opus 9. In the end, auction goers may have suffered Opus-overload, as only six of the eight available pieces were sold – but that is actually still good. Apparently, all the Opus watches came from one collector. Below is additional information on each piece that was available including a bit about their creation, estimated value and hammer price (if the reserve was met). 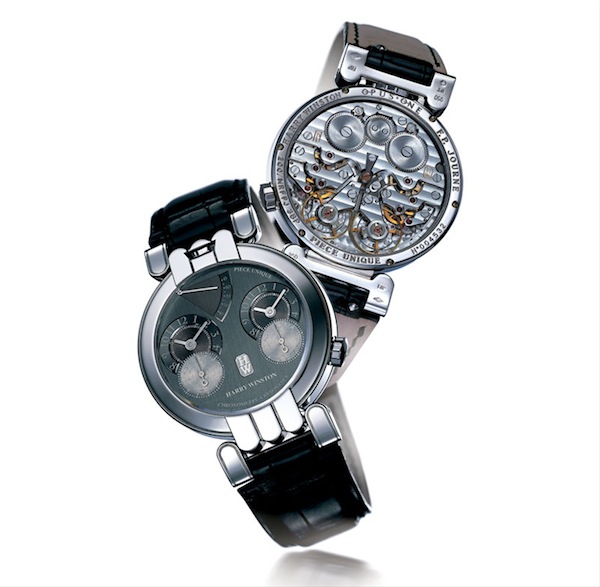 The Opus 1 – The first in the collection and the start of the Opus collaborations highlighting the work of F.P Journe. The Opus 1 was available in three editions, each being limited to six units. Including a 5 Day Automatic, a twin time Resonance Chronometer and a Tourbillon, the example seen at auction last week was the 5 Day Automatic with a diamond clad bezel. Given that the range offered only 18 total units it was surprising that the Opus 1 failed to sell despite estimates of $60,000 – $80,000 USD (lot 4837). Rare yes, but the design is 12 years old and tastes have changed a great deal since it was announced. 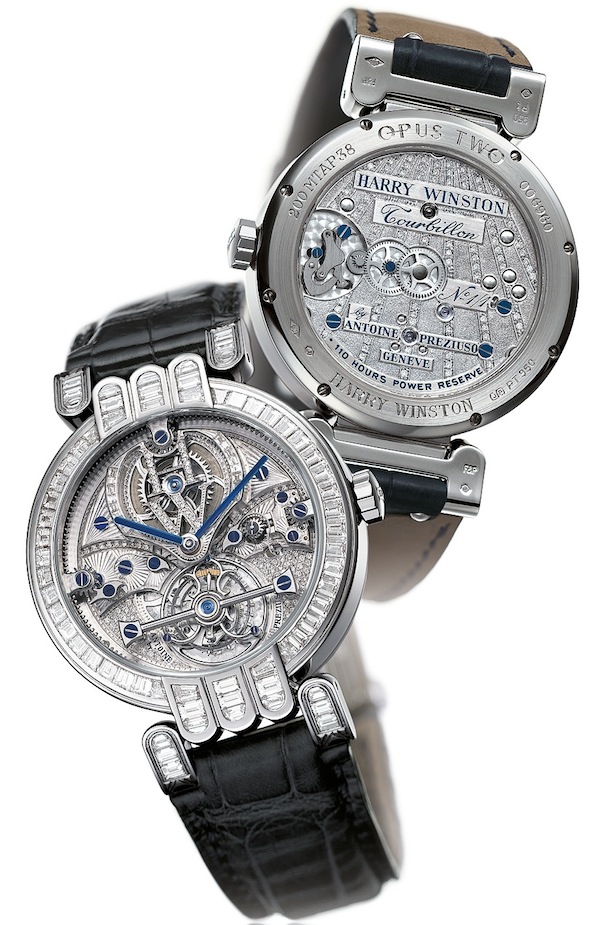 The Opus 2 – Featuring a 38mm platinum case and a total of two possible versions, the Opus 2 is the result of a collaboration with watchmaker Antoine Preziuso. The Opus 2  was limited to 11 units spanning two different movement options which additionally each had a special single unit adorned with diamonds for a total existence of just 24 hand-made pieces. Seen as both a tourbillon with retrograde calendar or as a fully exposed tourbillon, this auction was for a diamond clad version of the latter and saw estimates of $100,000 – $155,000. This extremely limited piece found a new home with a hammer price of $111,318 USD (lot 4581).

The Opus 3 – One of the most eccentric of the Opus collaborations, the Opus 3 is the brain child of Vianney Halter and features six porthole displays. Each of the displays relies on its own jumping indicator to show the hour in the top left and right windows (blue), minutes in lower left and right (black), and date in the vertical center displays (red). Limited to 55 units in platinum or rose gold, the Opus 3 featured a massively complex hand wound movement and an exceedingly unique aesthetic that was a considerable departure from the previous Opus models. This rose gold example did quite well at auction, surpassing the $75,000 – $150,000 estimates with a final price of $173,448 (lot 4877). This is actually quite good as the Opus 3 became a bit of a legend as it took 7 years to finally deliver the watches (in 2011). 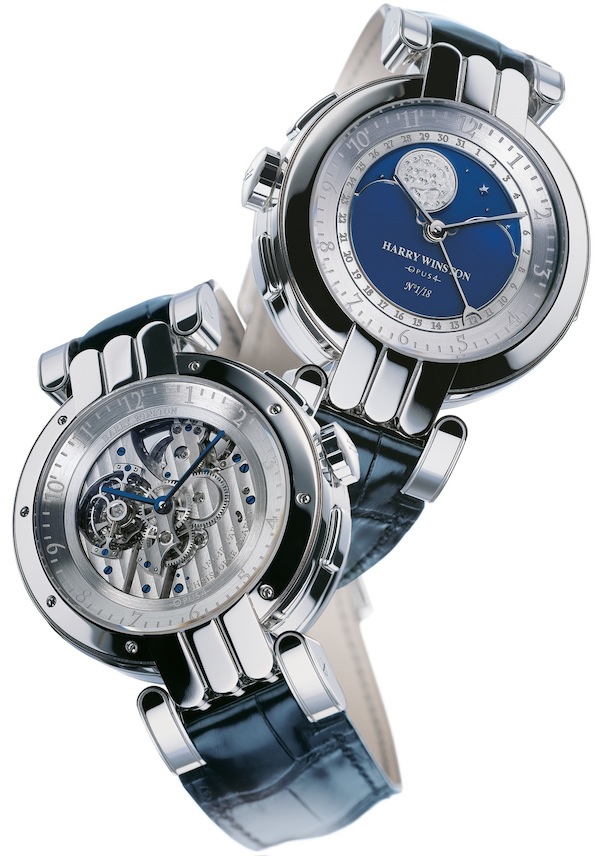 The Opus 4 – This dual-sided grand complication comes from none other than Christophe Claret (creator of the X-Trem-1 and 21 Blackjack). Featuring a tourbillon, minute repeater, moon phase and date all packed into a 44mm platinum case which can be worn with either dial facing up, it was surprising that this example of such a limited Opus (only 20 units made) would fail to find a buyer. A rare and unique watch like the Opus 4 likely needs a fairly rare and unique buyer, or perhaps the $150,000 – $200,000 estimated (and the corresponding reserve) was simply too high (lot 4987). 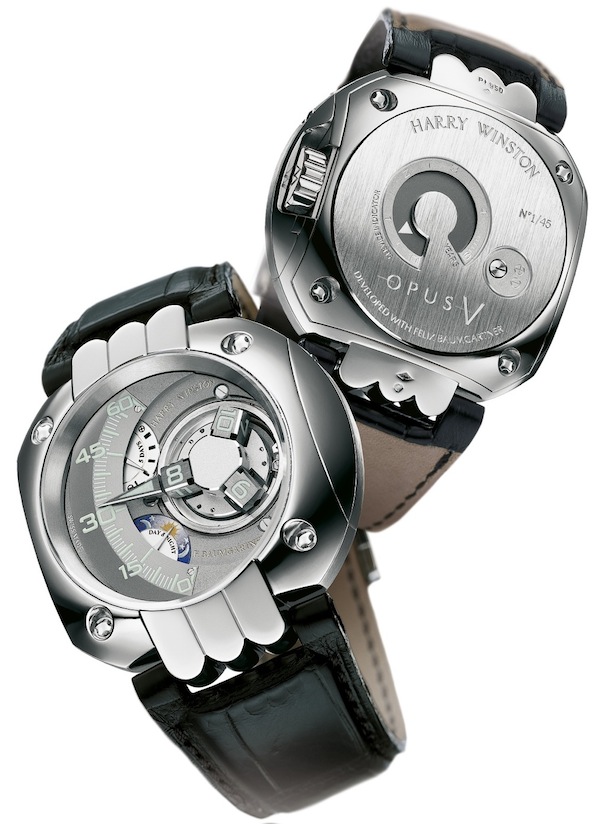 The Opus 5 – Announced at BaselWorld 2005, the dial and movement should be familiar to any fans of the Haute Horology brand, Urwerk. The Opus 5 came to Harry Winston by way of Urwerk’s Felix Baumgartner and features their distinctive rotating satellite hour and retrograde minutes display. The Opus 5 stunned the watch world with its innovative time display, custom movement, and novel five year service indicator visible via the back of the watch. The auction offered a 2009 diamond-clad example of the Opus 5, which fell within the $155,000-$260,000 estimates by reaching a hammer price of $204,514 (lot 5033). 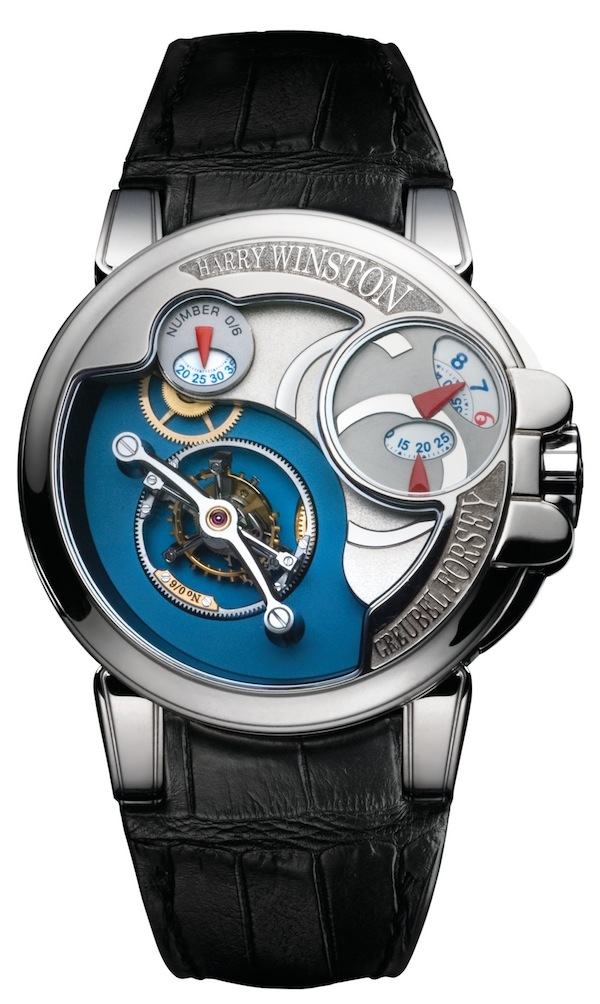 The Opus 6 – 2006 saw the announcement of the Opus 6, an absolutely gorgeous model whose dial could be the work of none other than Greubel Forsey. GF is a definitive force within the watchmaking world and the Opus 6 mixes their distinctive styling with a highly technical implementation of a double tourbillon featuring a fully hidden gear set so that the tourbillon appears to be completely separate from the mechanics of the watch. Independent co-axial discs separate the hours and minute displays from the seconds (at eleven), allowing ample space in the 44mm white gold case to show off the beautiful tourbillon movement. Limited to just six units, Christie’s had something of an especially rare find on their hands and this example of the Opus 6 fell within the $330,000 – $520,000 estimate, finding a new owner for the impressive sum of $375,313 (lot 5122). 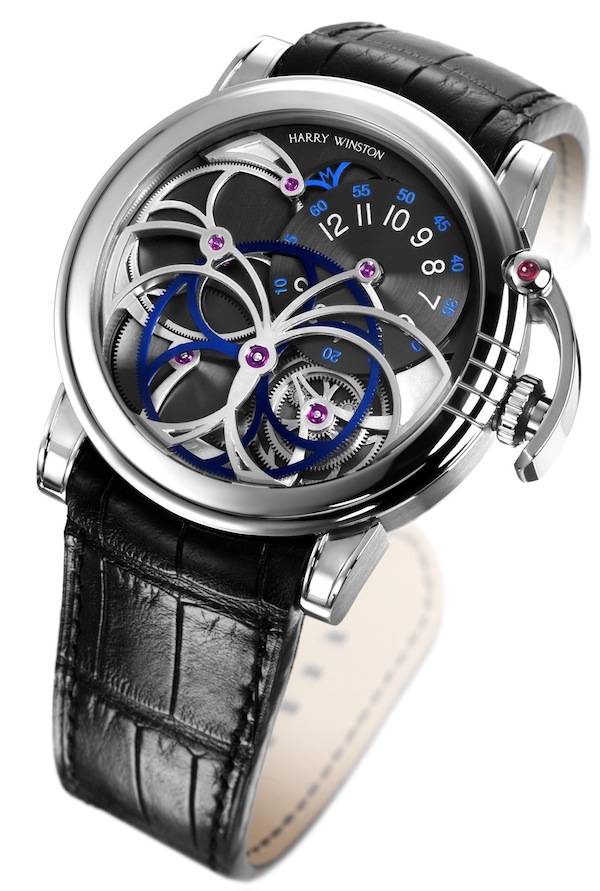 The Opus 7 – Born of a partnership with Andreas Strehler, the Harry Winston Opus 7 features no hands and is said to be inspired by butterflies. The 45mm white gold case features a hinged mechanical level for depressing the crown. A single press of the crown causes the rotation of a disc to display the hour reading, a second press displays the minutes and a final third press will show the remaining power reserve. This manually wound marvel was limited to 50 units and is one of my favorite of the Opus range as I love the circular patterns, the luxurious blend of white gold and blued steel, and the premise of a watch that demands interaction, a transaction between the watch and its owner must take place for the watch to render the time. Definitely not a daily wearer, but the Opus 7 has a certain toy-like quality that I very much appreciate. This example of the Opus 7 also fell within the $105,000 – $150,000 estimates with an end price of $119,084 (lot 5145). 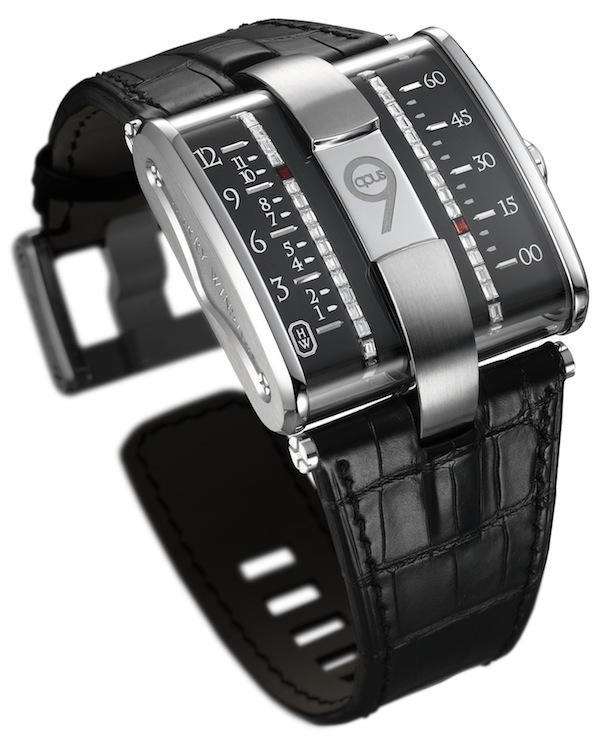 The Opus 9 – The Opus 9 is one of the more geeky looking designs to come out of the Opus program. Featuring a time display comprised of two belt driven and jewel encrusted scales that function as retrograde displays for hours (left) and minutes (right). Each belt is adorned with a diamond scale and employs a ruby in place of a pointer for each scale. This 45mm white gold watch is the product of the collaboration between not only Harry Winston but also watchmaker Jean-Marc Wiederrecht, and designer Eric Giroud and resulted in the Opus 9 winning the 2009 “Best Design Watch of the Year” from the Grand Prix d’Horlogerie. This example did quite well at auction reaching towards the ceiling of its $80,000 – $125,000 estimate, with a final price of $119,084 (lot 5171).

All things told, this was a very successful auction for Christie’s and, with a final total of just over $21.5 million in sales, was actually the most valuable season for any auction house operating in Asia. Though it is important to recall that the auction as a whole offered hundreds of watches. Furthermore, with so few Opus models in existence, it is exciting to see how the prices stack up against the estimates as professionals try and predict the value of a very exclusive line of watches. All concerns for funding aside, I would have been aggressively bidding on the Opus 6 or waiting what could be a very long time for for Christie’s to dig up an Opus 11, as it is definitely my favorite of the entire Opus family.