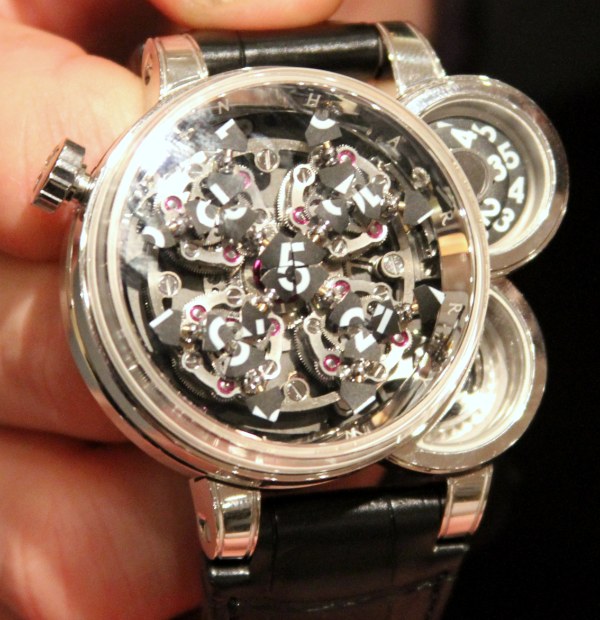 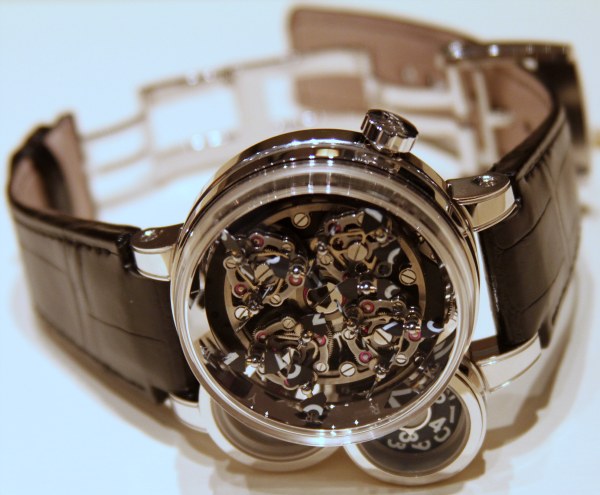 With another year comes another Harry Winston Opus watch. As we eagerly anticipate the result per annum, 2011 reveals itself as being a shockingly good season for the collection. Back in 2000 the Opus collection started as a series of limited edition timepieces that were a collaboration between Harry Winston and a single famous watch maker (go here to see all of them). The concept was dreamed up by then man-in-charge Max Busser. The tradition has been so successful, that it continues in even fuller force. This year the Opus man is watch maker Denis Giguet of MCT, who created the amazing Sequential One. Giguet lends his talents to the Opus game and wins with the Opus XI. While the Harry Winston DNA is a bit hard to see in this watch, the piece is amazing and quite unlike anything I have ever seen before. It takes complexity to a new level. Never has the display of just the hours and minutes been cause for such jaw-dropping wows.

You really need to see the Opus Eleven in action to appreciate it. The actual name of the watch seems to have turned into the number 11 being spelled out. I guess after “X” using Roman numerals is just getting too confusing. The “Eleven” it is for now, but many of us will be calling it the “Opus Mickey” because of the shape of the case when looked at from the side. It is hard not to compare the design with that of some of Vianney Halters work. This really isn’t a watch about the case. While you notice the shape of the case, Giguet and designer Eric Giroud seemed to want to make the watch more about the movement and the shape. So what you have are three round “cakes” that make up the case as they asymmetrically stack on each other. 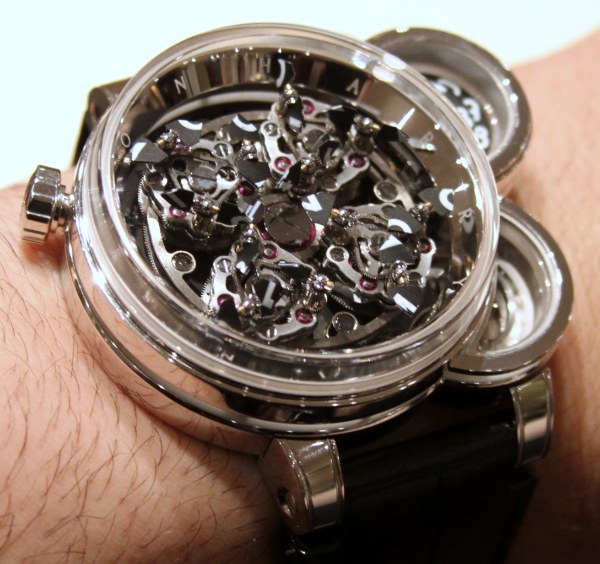 As Harry Winston is a “precious” watch brand, the Opus Eleven comes in an 18k white gold case. Aside from that the watch doesn’t feel like a showy piece – more like a crazy mechanical item of superb complication. The system to tell the hours required software just to conceive. Still, Harry Winston mentions that a diamond studded model will be available for those who wish to get theirs “gilded.” On the wrist the Opus Mickey is comfortable. Turn the case over and to the side and you see the ears – sort of skewed as though Picasso might have imagined them. Though here it was Mr. Giroud (who don’t forget is one of the MB&F friends). The watch has a black tapered reptile strap that goes with the design perfectly. The crown sticks out in just the right place to be manipulated. As wild as the Opus Eleven is to look at, it is still meant for wrist time. 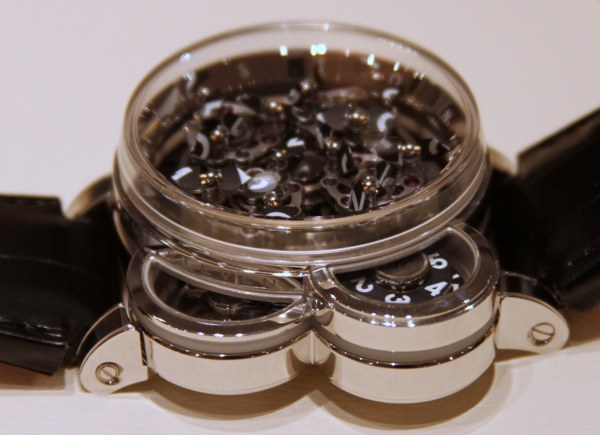 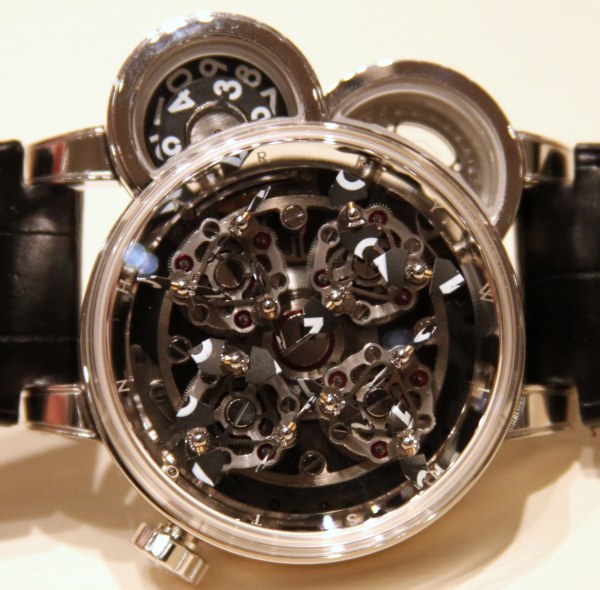 When Denis imagined what the Opus Eleven would be – he wanted to make “time explode.” The result was the invention of a “puzzle,” where a complex matrix of plates would come together to form the hour indicator display, and then break apart again when the hour is over – only to reassemble with the next hour being shown. In a sense, you have here one of the world’s most complex jumping hour timepieces. If I saw an animation of the system working I would laugh and joke about how it would break itself upon first use. Though it does work, the proof is in the pudding and Denis showed me it in action. The video in this post should put all your questions to rest. The movement is over 500 pieces and just boggles the mind to look at.

According to Denis the system is durable enough for daily wear. Don’t play golf with the watch on, but you should be able to do everything else. He designed the hour telling system to have a shock absorption feature that will help it working for a long time. Note the ones you see here are prototypes, and improvements will be included in the final pieces. The movement in the watch only tells the time. The main “cylinder” of the case displays the hour, then to the upper right of it are two discs to display the minutes in a clever manner. Below that is a opening to see the large balance wheel and escapement. Sapphire crystals sit on the watch like caps to protect the movement from curious fingers. The case itself is like a layer cake of sapphire crystal and white gold. 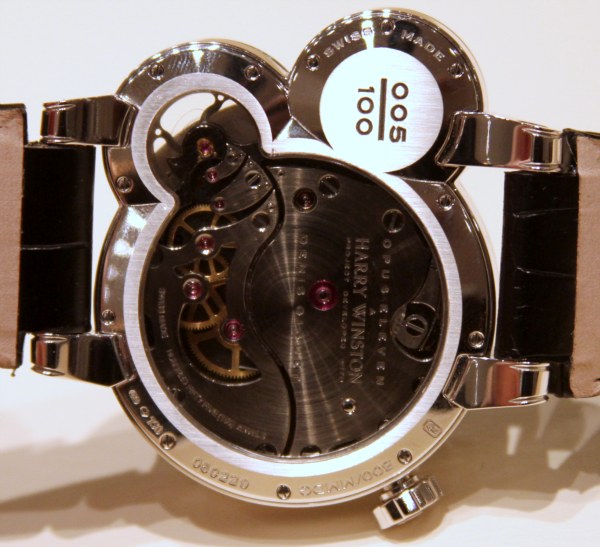 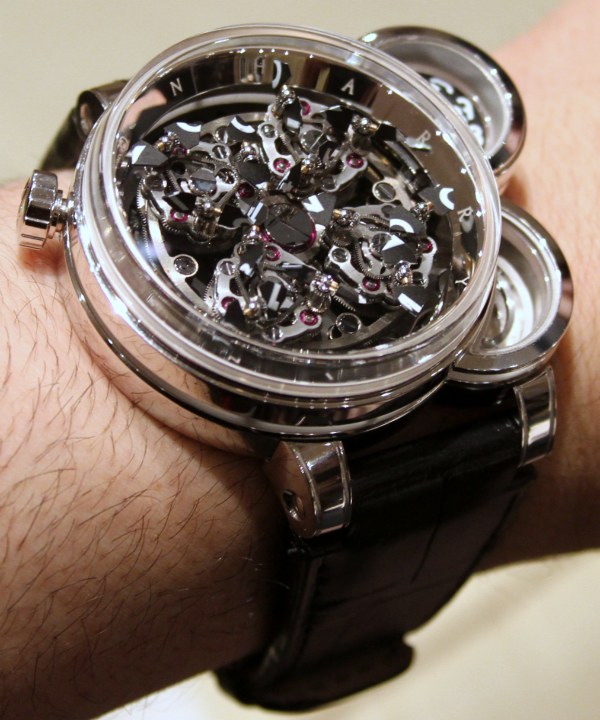 Like I said, it is hard to see Harry in the watch. The brand is mostly there in the design of the lugs and the branding on the polished flange right and caseback. When it comes down to it though, the people who will be knowledgeable to appreciate this watch know exactly what it is, and where it came from. Harry Winston could leave its name off the piece altogether and it would always be recognized as an Opus.

I am thrilled at the technique and presentation of the Opus Eleven and think it is one of the best Opus watches ever. Why? Because it really epitomizes why watch lovers love the Opus collection and ideology. To give talent the reason to be totally different and wild in their work. Denis and Eric had fun with this – and Harry Winston can be damn proud of this. The Opus Eleven will be available as a limited edition of 111 pieces (100 in gold, and 11 in gold and diamonds), Price is in the $250,000 range ($230,000 in white gold, and $289,000 in white gold with diamonds) and pieces should be available at the end of 2011. Keep it up Mr. Winston. 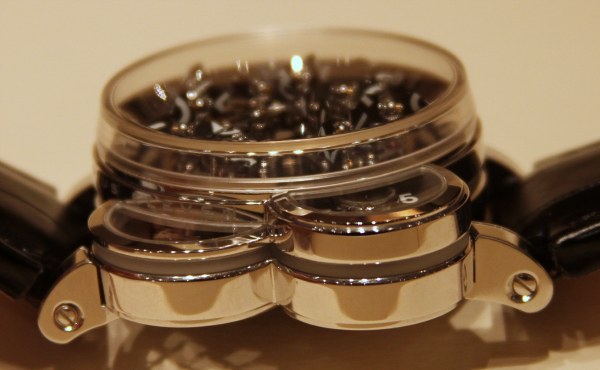