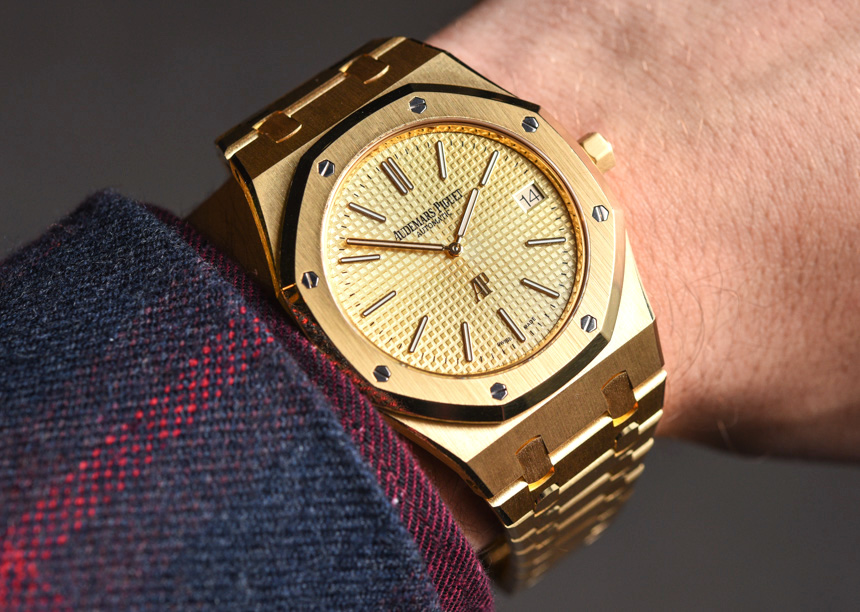 Regardless of whether or not you’re into all things that glitter, it can’t be denied that 2017’s SIHH trends were punctuated by heaps of the 79th element in yellow, white, and frosty hues. And no one had more to show in this camp than Audemars Piguet, whose Extra-Thin Jumbo Royal Oak (reference 15202) in gold didn’t quite steal the spotlight from the showstopping Perpetual Calendar in ceramic, but it certainly came awfully close – especially for those who’ve been following the last 40 or so years of the Royal Oak. 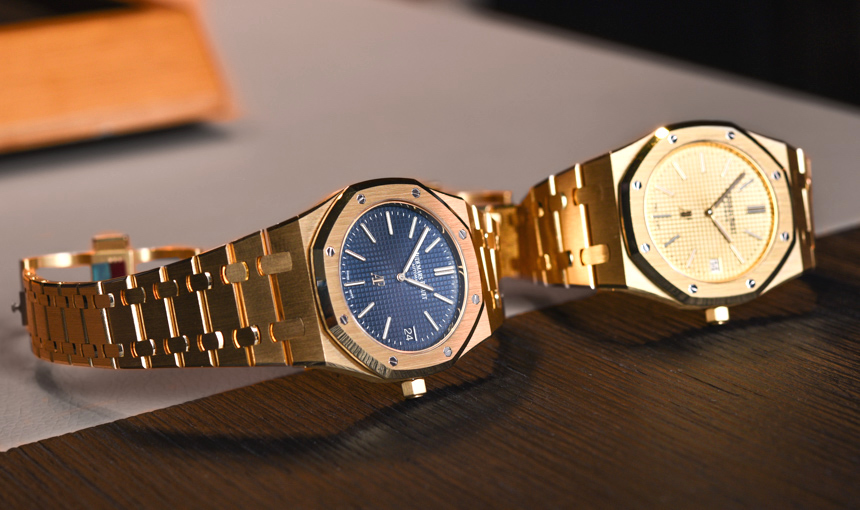 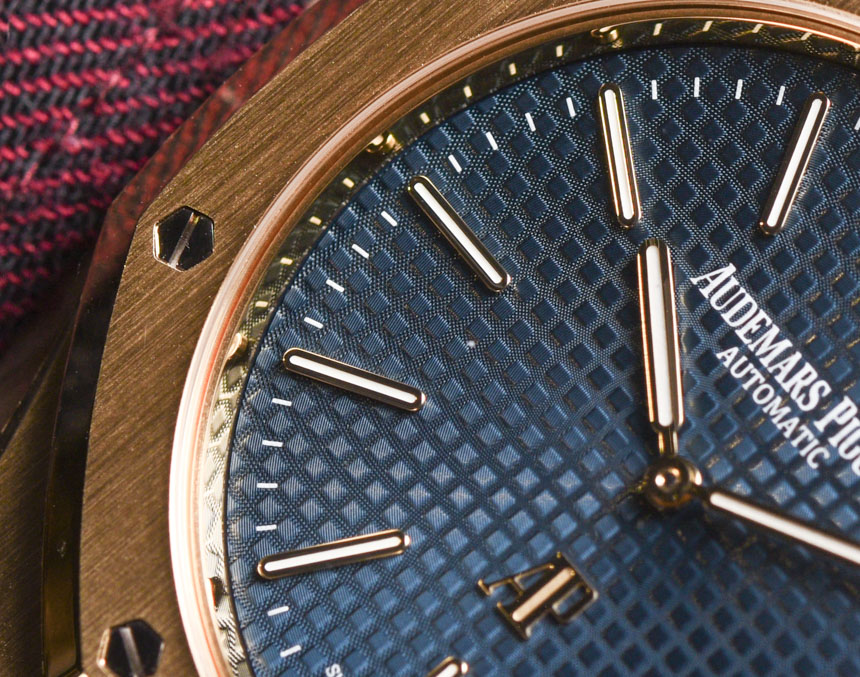 As we already start looking forward to 2018’s SIHH novelties, we thought it high time to take a closer look at some of this year’s favorites, which include the gloriously over-the-top 15202, rendered for the first time as a modern, non-limited reference entirely in 18-carat yellow gold. It’s not just the all-gold case that lends the 15202 significance though – there are a few other (albeit much more subtle) visual cues that set this particular reference apart, and might make it more desirable for collectors in the future. Perhaps most obvious, is the simple time and date-only dial configuration, completed by the ‘AP’ logo at 6:00, which pays direct homage to the original steel 5402 released in 1972. This aesthetic also tips its hat towards the yellow gold 5402BA Jumbo released five years later – the first time Audemars Piguet rendered the Jumbo in this precious metal. 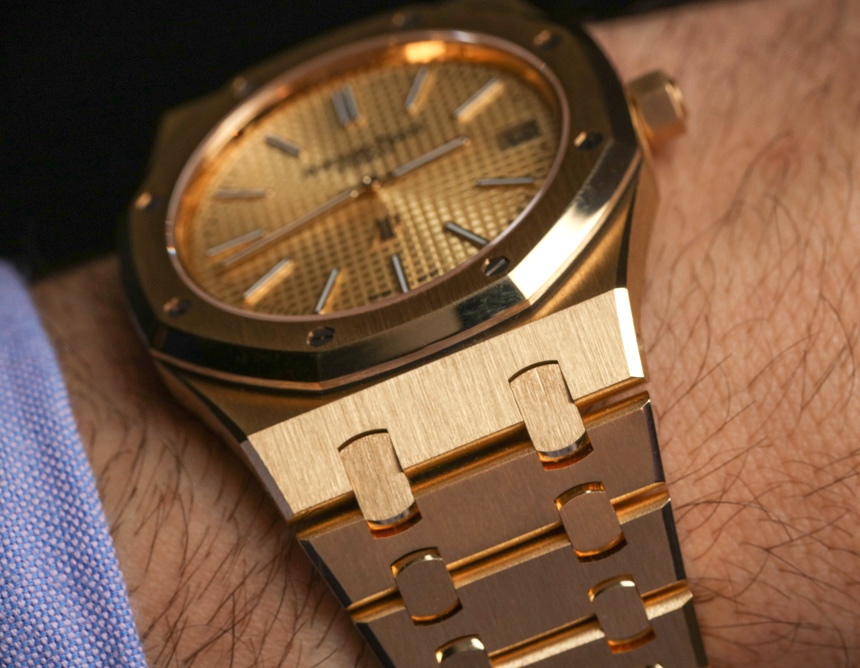 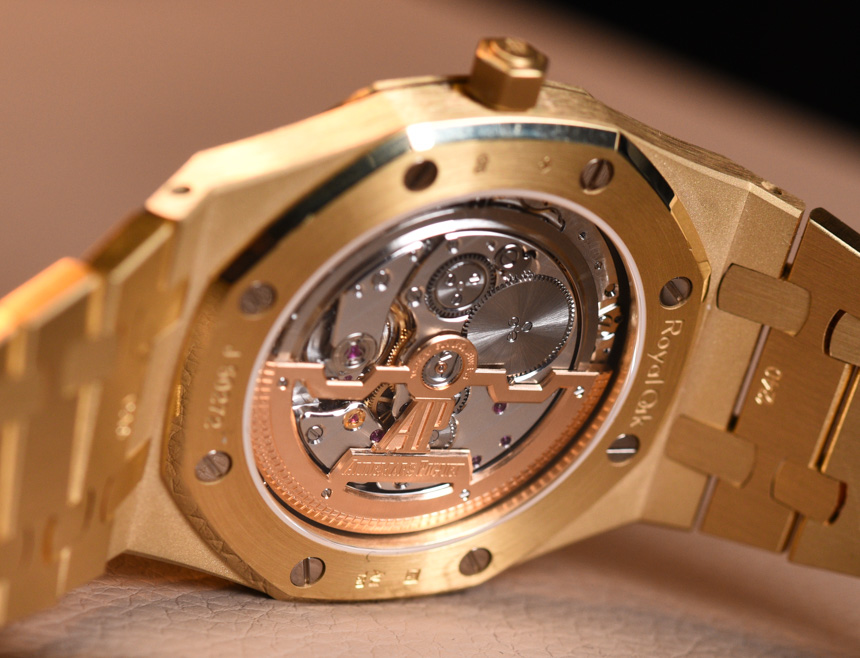 However, more noteworthy is the thickness – the new 15202 measures a hair over 8mm, 0.2mm thicker than the original 5402, and the closest we’ve seen to those pioneering ultra-thin measurements since the 40th Anniversary editions from 2012 – hence the ‘Extra Thin’ naming convention. This new-but-really-old profile, coupled with the eminently wearable 39mm case size truly feels like the sweet spot for the Royal Oak, and has much to do with why this iconic design was able to become such a future-proof classic in the first place. 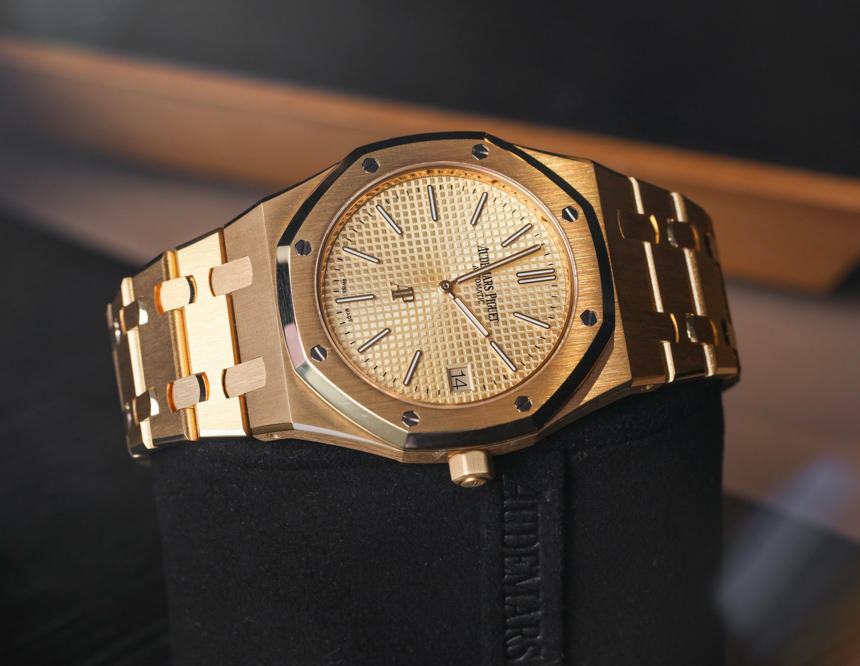 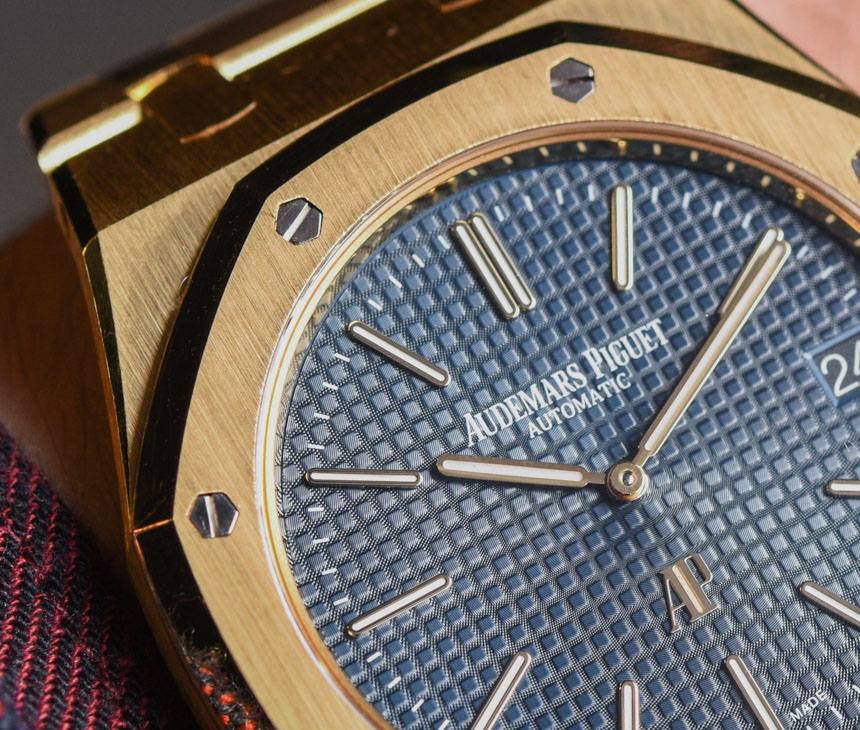 The Jumbo Royal Oak in its most classic configuration is a watch that historically, by all measurements, should wear exceptionally thin. However, this new reference is one that still manages to jump off the wrist, thanks to its solid yellow gold case, and light-gobbling “Petite Tapisserie” tonal champagne colored waffle dial. Those looking for a slightly more toned-down aesthetic still rendered in this precious metal will appreciate the second of the 15202’s two new dial variations: a gorgeous blue, which, given the spate of blue-on-bronze sports watches we’ve seen this year, is as much on-trend, as it is slightly less ostentatious. 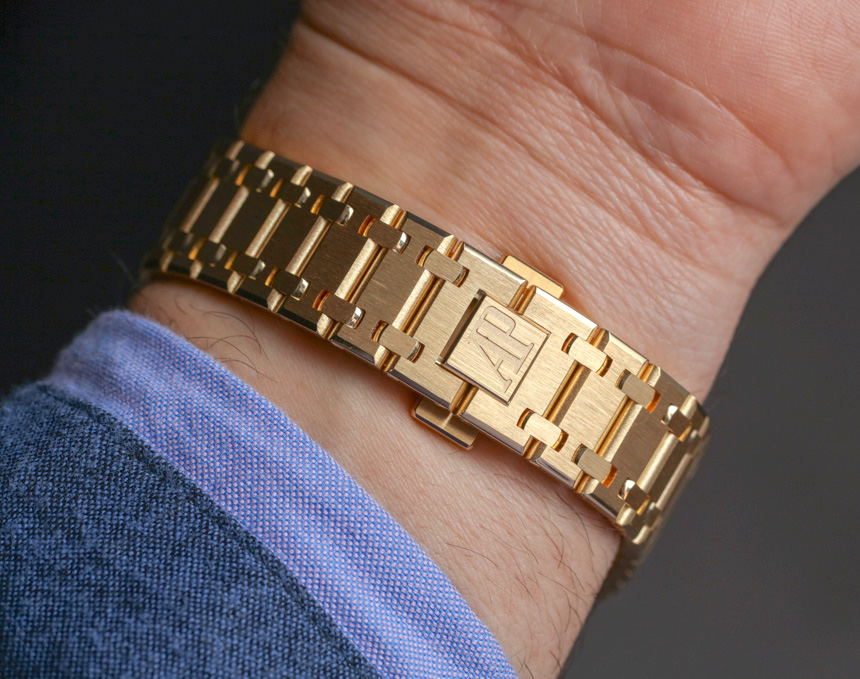 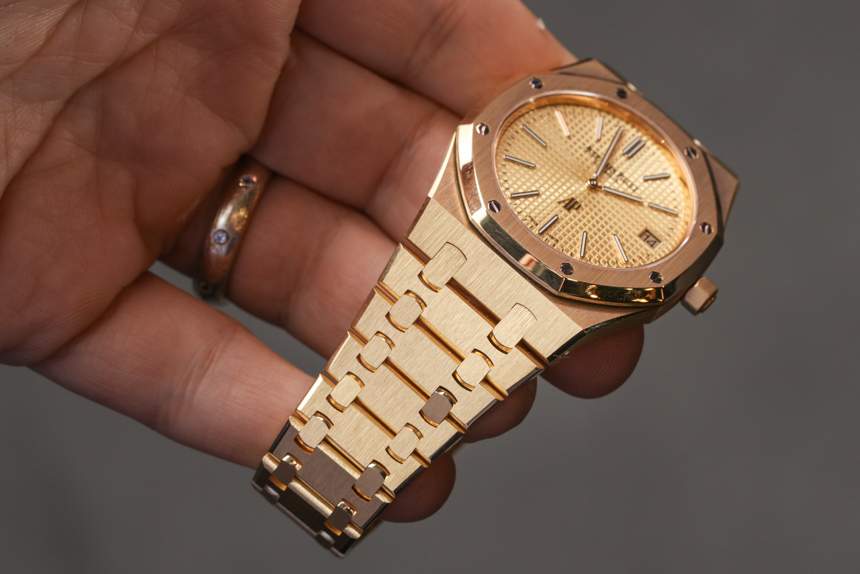 Despite the svelte profile though, the gold 15202 is a surprisingly heavy watch. This tactile illusion is due, of course to the fact that gold’s density is nearly three times that of stainless steel, lending the assertive wrist presence of a much larger sports watch to one that can otherwise slide easily beneath the cuff of a dress shirt. When you look at the bracelet and case when considering the weight of the gold, the slim profile but solid gold look presents a contrasted personality that works well. It’s safe, but a modern design icon in an old-school material. 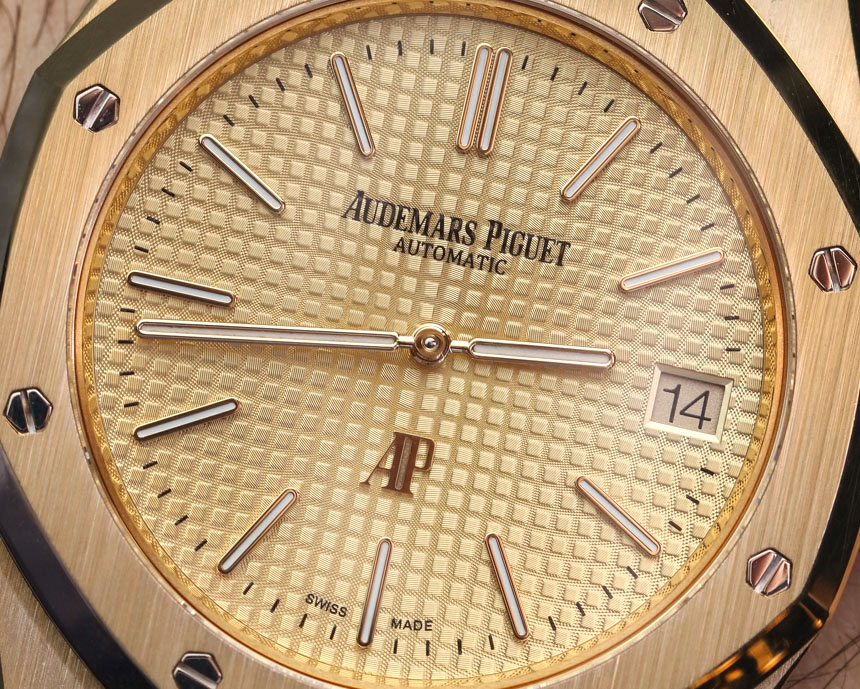 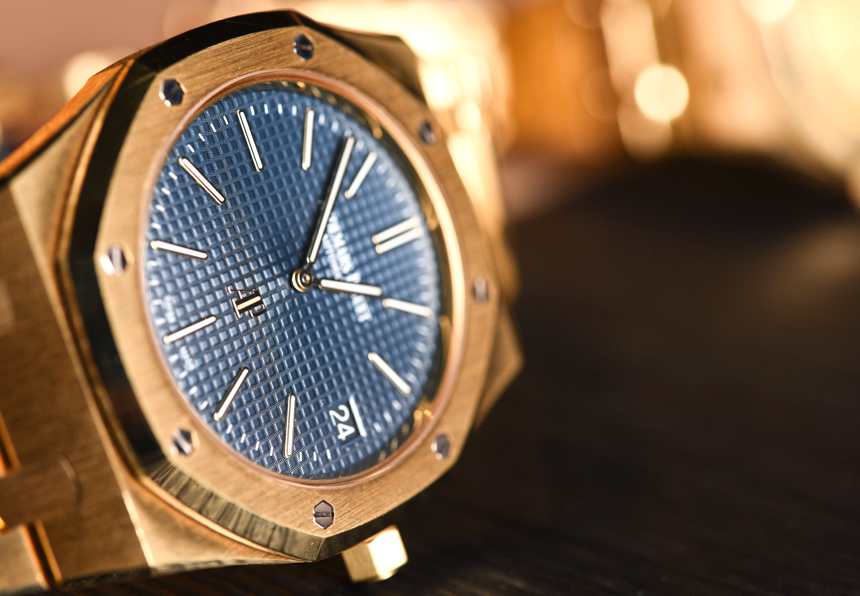 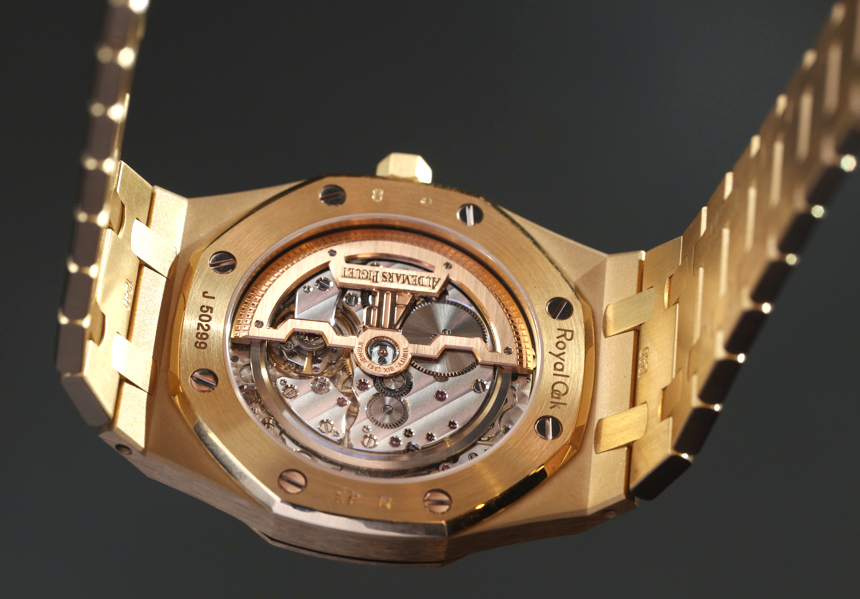 From the dial-side, the look and feel of the 15202 is distinctly classic – like a vintage re-issue of the original 5402 in gold. Inside though, beats a different story. Here we have the Caliber 2121, now produced in-house by Audemars Piguet (in the Royal Oak’s formative years, the 2121 was actually produced by Jaeger LeCoultre). It’s an ultra-thin automatic movement measuring 3.05mm thick, and characterized by a unique 2.75Hz (19,800 vibrations per hour), though that slightly lower-than-average alternance isn’t readily visible as the 15202 doesn’t feature a running seconds hand. Unlike the 5402 that inspired it, the 15202 gets a sapphire crystal exhibition caseback, through which the cal. 2121’s 21-carat gold rotor is visible, as it glides back and forth on the circular rail running the circumference of the movement – one of the tricks enabling the 2121’s signature thinness. 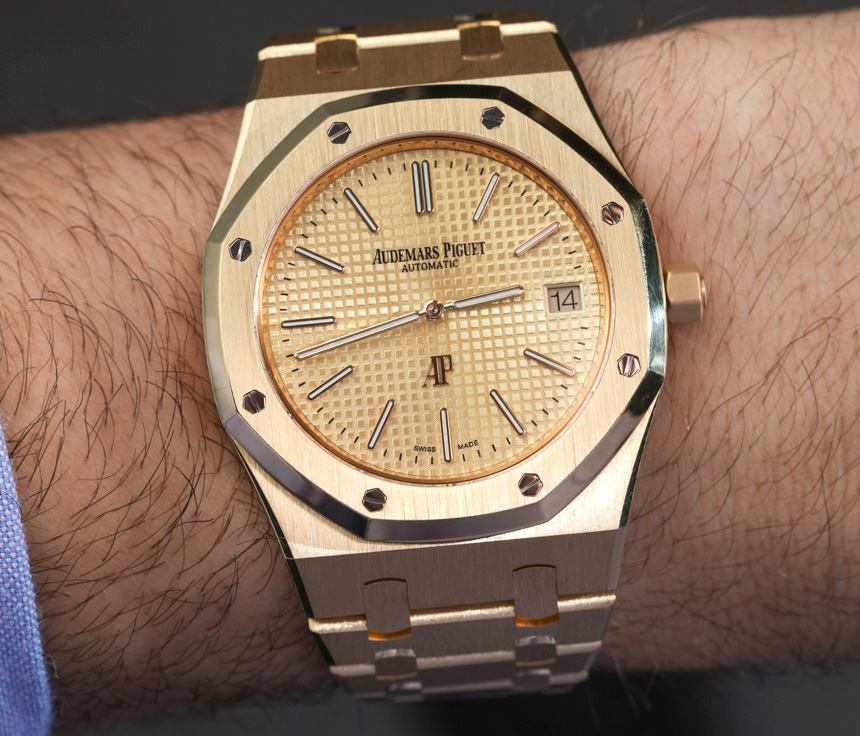 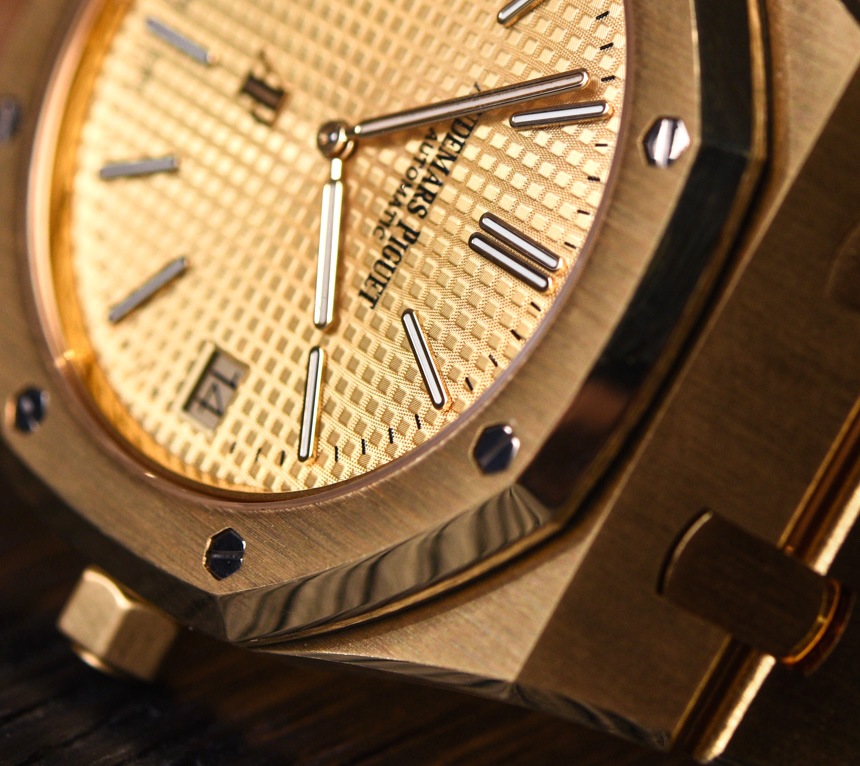 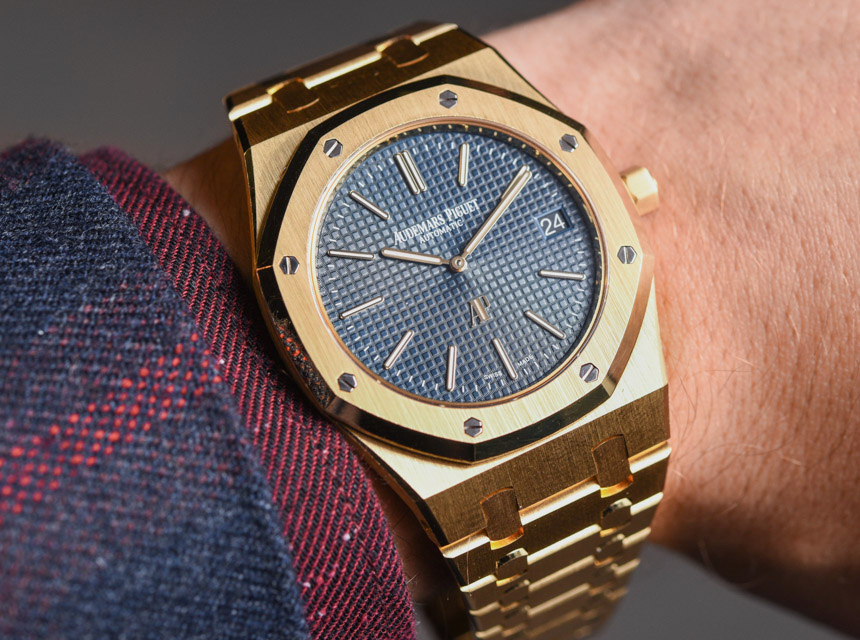 In total, the 15202 will be available in three variants – the new gold options (yellow gold on champagne yellow, or yellow gold on blue) join the existing stainless steel 15202 which was re-introduced back in 2012. While the stainless steel Extra-Thin Jumbo Royal Oak starts at roughly $22,000, those looking to ‘stay gold’ can expect to part with over double that – $55,000 for the 18-carat gold variants. audemarspiguet.com