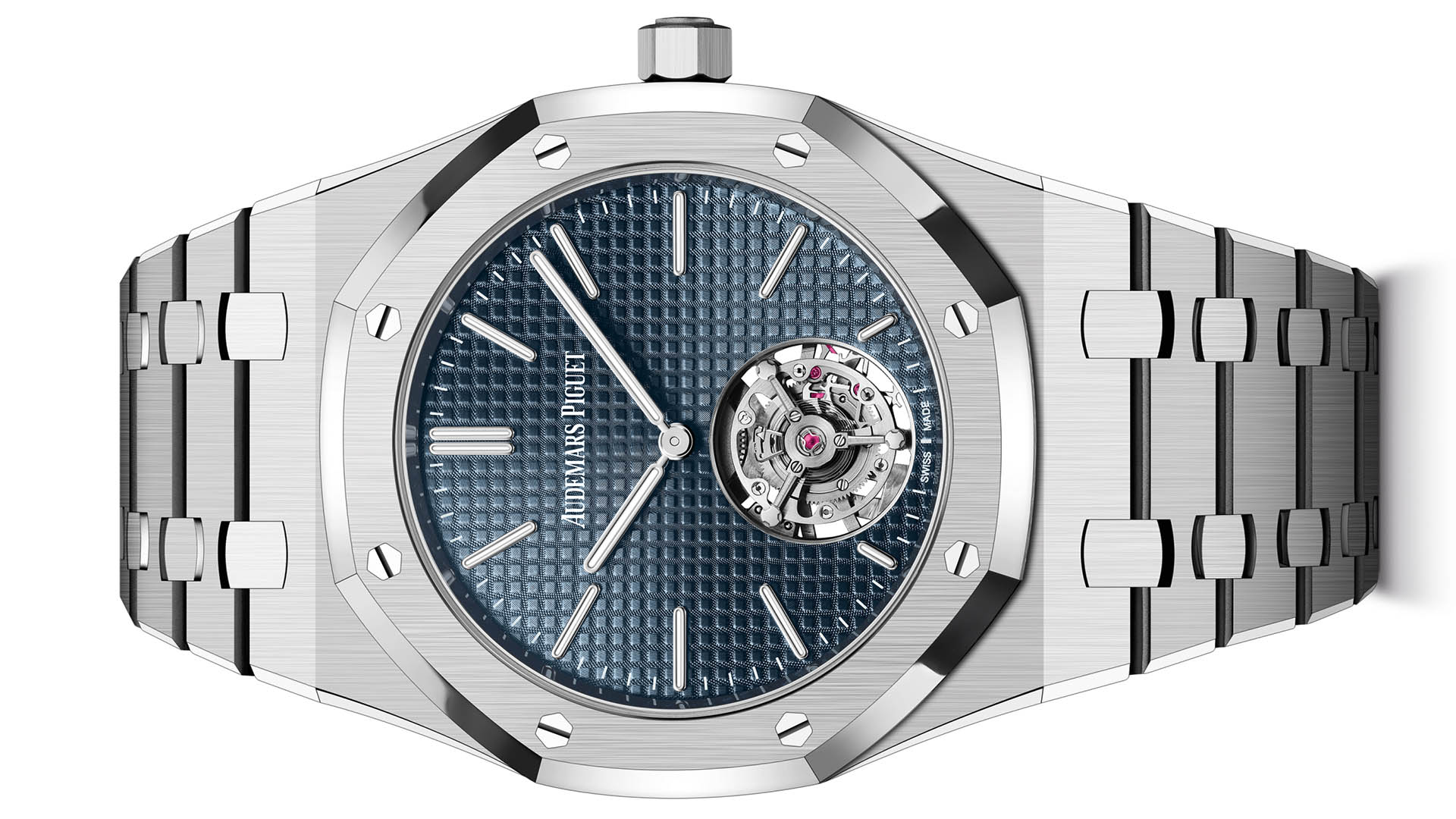 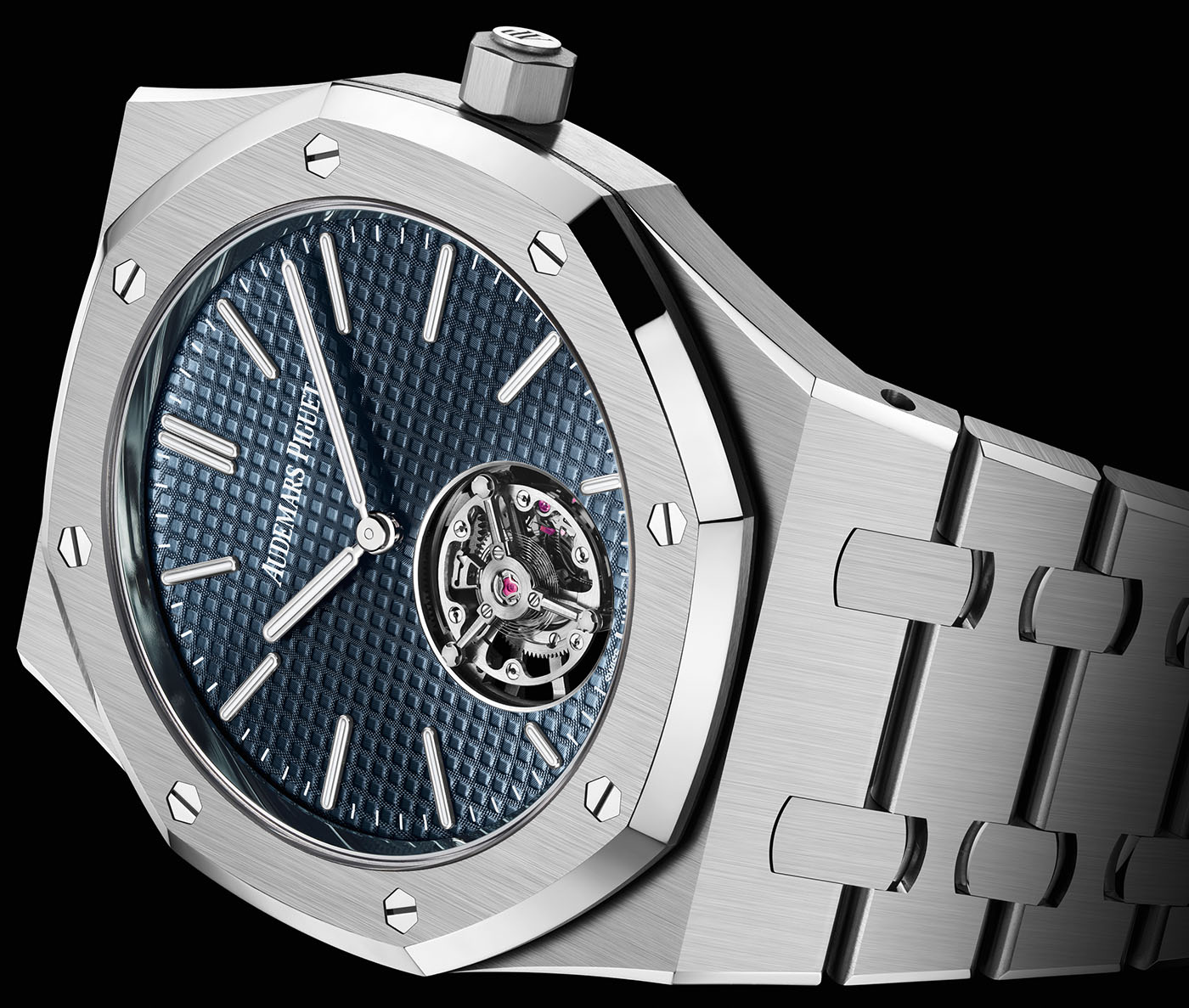 1972 was a landmark year in the luxury watch industry for a variety of reasons, but perhaps the most impactful event to come out of that year was the introduction of the Audemars Piguet Royal Oak. Produced at a time when the traditional Swiss industry was in danger of collapsing under the weight of affordable quartz-powered Japanese competition, the Royal Oak’s avant-garde Gerald Genta-designed integrated case and its exorbitant (for the time) price tag reframed the stainless steel Swiss sports watch as an aspirational luxury item, rather than a simple tool. 50 years on from the Royal Oak’s debut, the series continues to be wildly influential in the industry, and as part of its anniversary celebrations Audemars Piguet is bringing an automatic flying tourbillon movement to the classic 39mm Royal Oak “Jumbo” case for the very first time. The new Audemars Piguet Royal Oak RD#3 combines traits of many fan-favorite Royal Oak iterations into a “greatest hits” design compilation, while pointing the way forward for the series with an all-new ultra-thin selfwinding flying tourbillon movement. 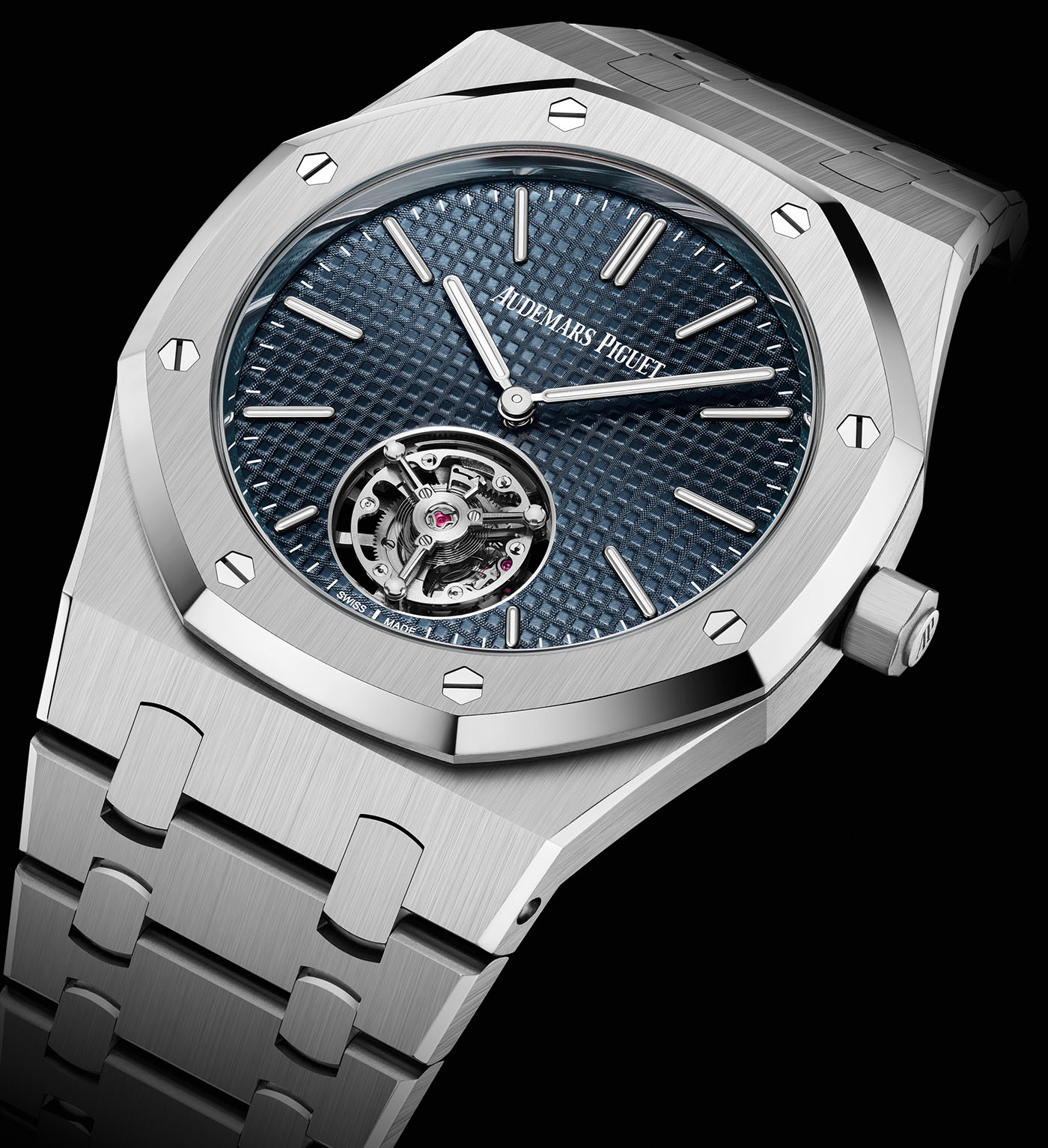 At 39mm-wide and an elegant 8.1mm-thick, the Audemars Piguet Royal Oak RD#3’s stainless steel case offers a classically proportioned rendition of its vintage-style “Jumbo” case design. The overall form should be familiar to enthusiasts, with the Royal Oak’s classic octagonal bezel, sharply planar integrated lugs, and unguarded octagonal crown. While on paper this seems like a relatively standard iteration of the “Jumbo” Royal Oak case, these familiar shapes belie the intensive work Audemars Piguet has taken to maintain these proportions while adding an automatic flying tourbillon movement. The new movement is built from the ground up with thickness in mind, measuring only 3.4mm-thick overall, and ensures that the added complexity of its complications do not spoil the lines of the Royal Oak RD#3’s design. One area where the Royal Oak RD#3 does suffer, however, is its water resistance. This is a series that built its reputation on being a luxurious gentleman’s sports watch, and its 50 meter water resistance rating is decidedly unsporting. 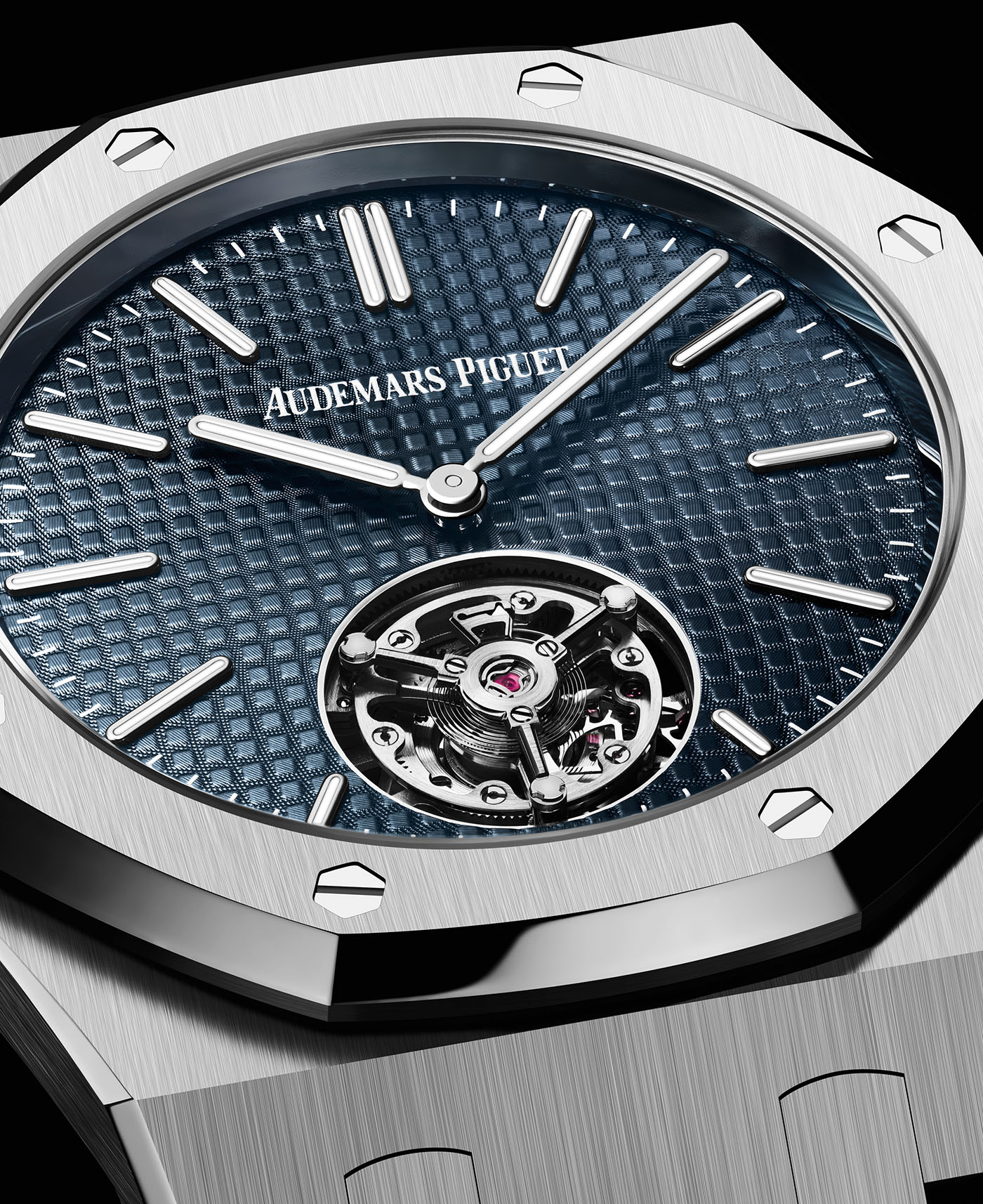 Like the case, the dial of the Audemars Piguet Royal Oak RD#3 aims to preserve as much of the original ‘70s Royal Oak “Jumbo” design as possible while integrating an all-new flying tourbillon design. The traditional petite tapisserie guilloche dial surface is paired here with Audemars Piguet’s Bleu Nuit, Nuage 50 PVD dial color, which brings the familiar rich, deep sunburst navy blue tone of the original Royal Oak through a more modern production method. Likewise, the white gold paddle handset and slender matching applied indices are impressively faithful to the classic Royal Oak profile in images. At 6 o’clock, however, the familiar two-hand Royal Oak layout gives way to a reimagined flying tourbillon design. Compared with previous flying tourbillon-equipped Royal Oak models, the tourbillon cage is pared back and simplified here, with slender arms intended to maximize visibility for the escapement within. While many contemporary flying tourbillon-equipped designs make this exotic escapement the centerpiece of the design, The Royal Oak RD#3 prefers to let the tourbillon speak for itself in images, with no more fanfare to the tourbillon window than a simple polished accent ring. Instead, Audemars Piguet’s method of showcasing this element is altogether more nuanced, with specially designed movement architecture that places the tourbillon level with the dial surface, rather than recessed beneath it. 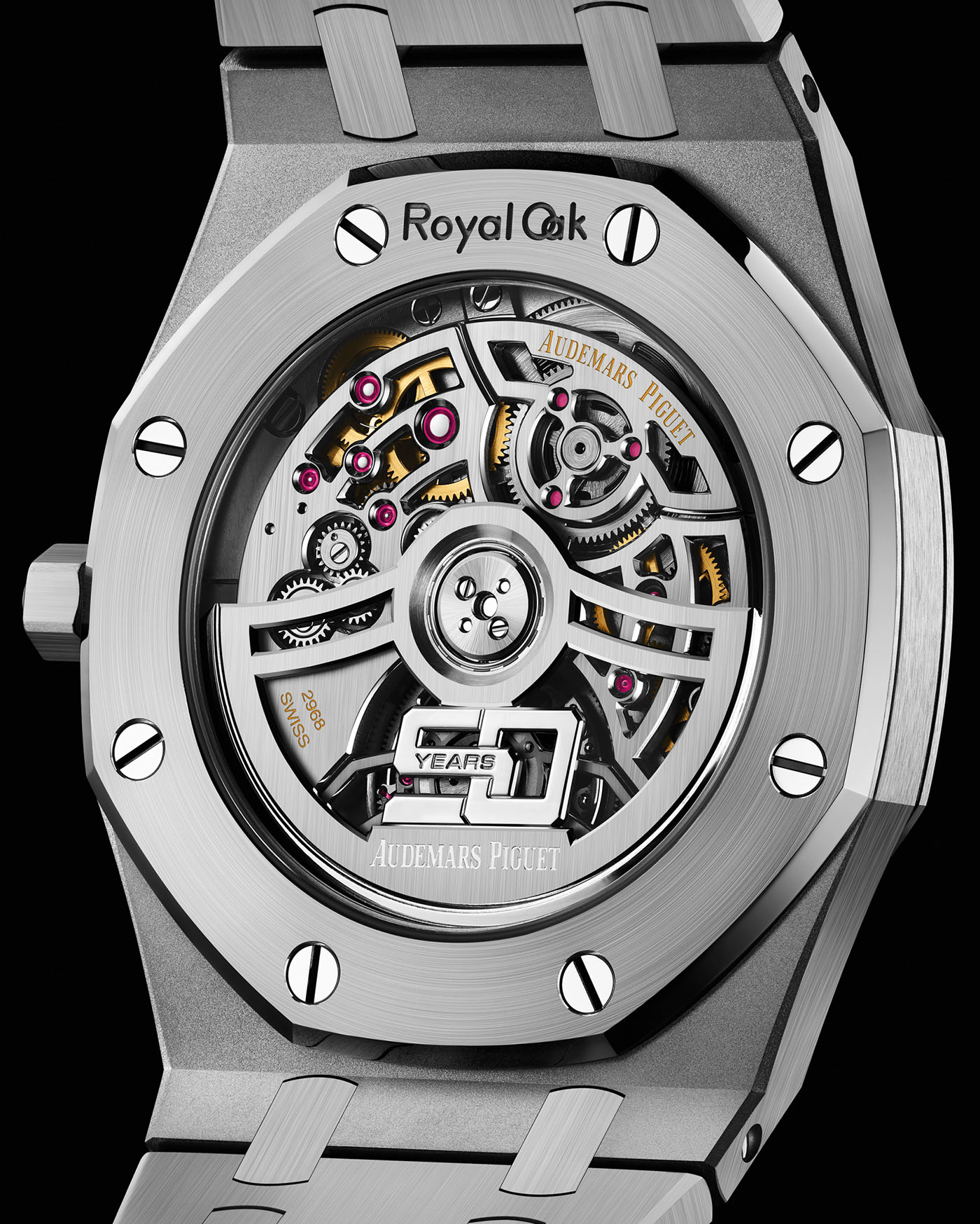 Audemars Piguet powers the Royal Oak RD#3 with its new in-house Calibre 2968 automatic flying tourbillon movement. With an overall thickness of only 3.4mm and all-new construction, this is a fully modern take on the sporting flying tourbillon movement from the brand and its finishing echoes this sense of modernity. Each of the bridges is finished cleanly with vertical brushing and polished anglage, but each one sports bold skeleton cutaways that frame key elements such as the gear train and mainspring barrel in images. The skeleton rotor commemorates the Royal Oak’s 50-year anniversary, and features a mix of brushed and polished finishes atop a rhodium-plated 22K pink gold base. Performance-wise, the Calibre 2968 delivers a solid 50 hours of power reserve with a 21,600 bph beat rate. Naturally, Audemars Piguet pairs the Royal Oak RD#3 with the line’s iconic tapering integrated stainless steel bracelet, with its instantly recognizable mix of brushed surfaces and sharply polished chamfered edges.

By remaining faithful to the 1972 “Jumbo” design while incorporating modern finishing techniques and an all-new slim flying tourbillon movement, the new Audemars Piguet Royal Oak RD#3 combines some of the best of the first 50 years of Royal Oak design and introduces bold new engineering concepts for its future. The brand has also announced this is only the first step for the RD#3 concept, and it will introduce a new 37mm version of this model with a new dial color in September 2022. The Audemars Piguet Royal Oak RD#3 is available now through authorized dealers. Despite requests from aBlogtoWatch’s editorial team, Audemars Piguet has declined to announce the MSRP of this model as of press time. For more details, please visit the brand’s website.