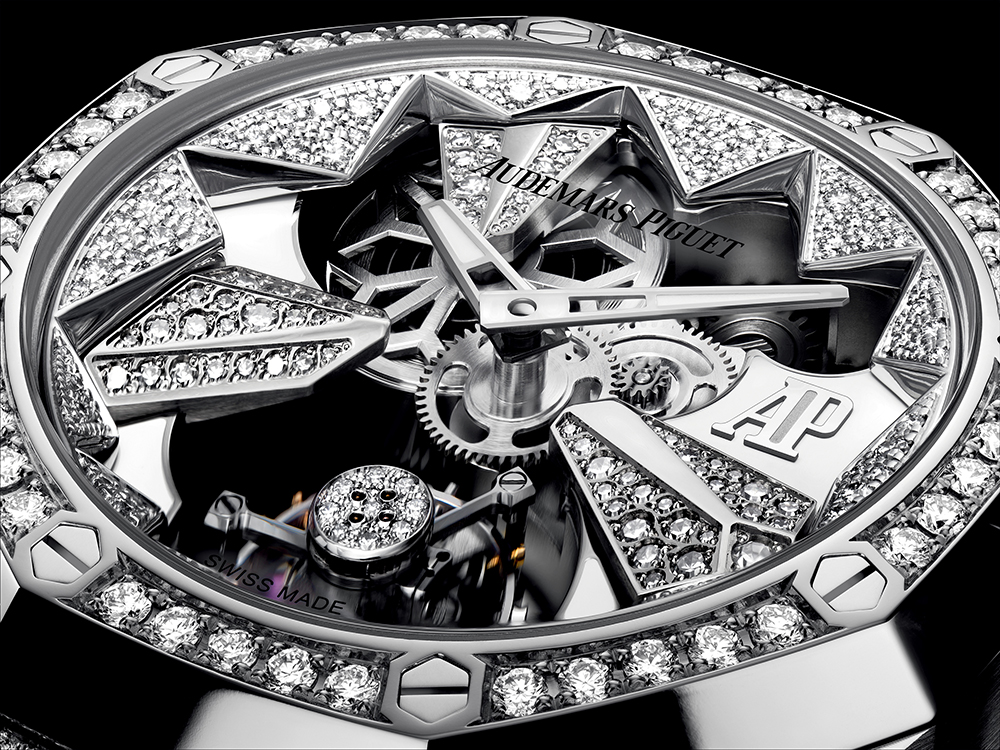 Audemars Piguet continues to quietly introduce some of the most important ladies’ watches on the market, a fact that is often overlooked in the shadow of its massively popular Royal Oak men’s collection. This year at SIHH, two new watches for ladies in the Royal Oak collection may change that once and for all. First, in a continuation of its growing presence in the jewelry watch segment, Audemars Piguet introduced the Royal Oak Concept Ladies’ Flying Tourbillon. It goes beyond high-level gemsetting to include a complication that represents a first-ever for Audemars Piguet. It also takes pride of place within the brand’s important Royal Oak collection. The new Royal Oak Double Balance Wheel Frosted Gold Openworked is another winner. Designed for “a smaller wrist,” this watch is also ahead of the curve when it comes to ladies’ timepieces. The Royal Oak Double Balance Wheel Frosted Gold Openworked is a decorated, 37mm version of the non-frosted men’s Royal Oak Double Balance introduced in 2016, with the same openworked Caliber 3132. The movement’s claim to fame is that it has two balance wheels and two hairsprings oscillating together on the same axis, theoretically cancelling out each other’s rate errors. The result is a watch that is more accurate and more stable. The movement is hand-finished and openworked to show the depth of the bridges, and it is presented in a two-tone composition: the balance, upper balance bridge, indexes, and hands are pink or yellow gold, while the rest of the components are rhodium plated. The case and bracelet are frosted gold, a continuation of Audemars Piguet’s collaboration with Florentine jewelry designer Carolina Bucci and a technique known as the Florentine method of indenting gold to create a shimmering sparkle, like snow. The finish was introduced last year on the ladies’ Royal Oak. The 37mm, 18k white gold Royal Oak Double Balance Wheel Frosted Gold Openworked is priced at $76,000. There is also a 37mm rose gold version with a case that is not frosted, priced at $68,500. The Audemars Piguet Royal Oak Concept Ladies’ Flying Tourbillon is not only the first ladies’ piece in the Concept collection but also the brand’s first flying tourbillon, in any collection (a flying tourbillon was also introduced in a new men’s piece this year: the Royal Oak Concept Flying Tourbillon GMT). Like the men’s Royal Oak, the watch is all angles – the eight-sided bezel with six-sided screws is signature to the collection. The dial plate is cut away at sharp angles, like broken ice, to reveal angled bridges and an openworked barrel. A sea of diamonds decorates the bridges, bezel, case, and strap attachments. At 38.5mm wide, it’s a little bigger than the Openworked, but the space is used wisely as a canvas for all those diamonds. The case is 18k white gold, and there are two versions: one with 459 round brilliant diamonds totaling 3.65 carats (priced at 190,000 CHF or about $203,350); and the other with invisibly set baguette-cut diamonds (priced at 395,000 CHF or $422,757). Audemars Piguet is always full of surprises when it comes to ladies’ watches. It’s almost impossible to guess what’s next, but it is possible to hope. This year the brand introduced the world’s thinnest perpetual calendar, with the miniaturized Caliber 5133, at only 6.3mm thick in the case. It would be great to see this movement used in a new ladies’ perpetual calendar! audemarspiguet.com