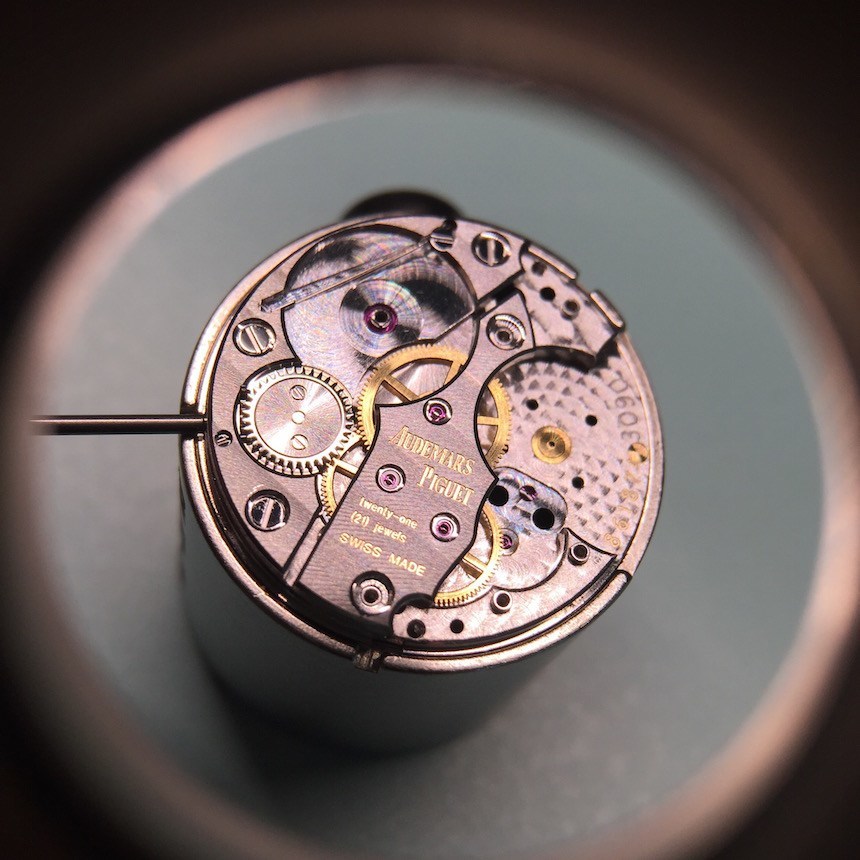 The week after the official availability date of the Apple Watch, while many are trying to formulate an opinion after having tried or received the new smartwatch, Audemars Piguet, one of the few remaining family-owned, independent watchmaking giants held a master watchmaking class in the center of Silicon Valley, San Francisco.

Having taken part in various watch industry events, I sort of knew to expect a first class glitzy affair, as luxury brands tend to offer to their precious clientele. What I did not expect, however, was the intimate level of attention to detail that was prepared for attendees of this event and the hands on, one-on-one activities we took part in during the entire four-hour event. First off, it’s important to understand that AP has held similar watchmaking events in various cities across the world. However, this was, to my knowledge, the first time it was being held in San Francisco or in the Silicon Valley area in general. The overarching goal of the event is to simply give watch lovers a hands-on (albeit quick) overview of what it takes to put together an Audemars Piguet movement – a simple three-hand movement, the reference 3090. It is somewhat similar to what AP ambassadors get when visiting Le Brassus and joining the AP family. In this case, AP came to my backyard, and sadly, I was not becoming their next ambassador. After a quick breakfast (our slot was early AM), we were taken to a room which was decorated to look like the inside of one of AP’s building in Le Brassus, complete with original watchmaker benches, tools, and the different parts we needed to put the movement together. The windows of the room were even decorated with posters of the Vallée des Joux in order to make one believe we somehow magically were transported to Switzerland once we entered the room. After putting on an AP watchmaker coat – getting me one more step deeper into the experience – I was directed to the bench assigned to me, where, as a wonderful and useful parting gift, an AP loupe was waiting for me in a nicely scripted card with my name and custom leather pouch. For the next three hours, in what felt like just one hour, under the guidance of AP master watchmaker technical trainer Gary Cruz and his assistant Emma Schaer, we gradually and meticulously put together an AP movement. Of course, many of the parts were ready for us to use before we even sat at our bench, but the overall experience was as close as one gets to tinkering with one of these marvels of mechanics outside of the AP buildings or service center. The treat was to be doing so with a movement so finely crafted that the screws (2mm in diameter) are polished using black polish techniques with the corners at a sharp 45-degree angle for which any misstep in tightening will result in the screw being wasted. Under the watchful eye and guidance of Gary, each of us moved from placing the main gears of the going train, to the main bridge, and then the mainspring barrel. By the end of the session, we had also placed the balance wheel and balance fork, and were ready for the escapement and to see the movement in action. Since this last step is super critical and results in a lot of failures, Gary picked one of our almost finished movements, and slowly, while explaining every step along the way, completed the movement. The final moment was to spin that balance wheel and see the whole thing come alive. After the wonderful time with the watchmaking team, returning our coats and saying our thanks, it was now time to get a final treat. We spent the next thirty minutes with Michael Friedman (AP’s Historian) and AP’s retail director Jasmine Bapic having hands-on time looking at historical pieces from the family business spanning more than a century. Michael, of course, knew all the details and answered all the questions we threw at him. The real joy was the opportunity to hold and see the finished products and even try them on. For instance, an incredible square jumping hour in a tank case, the definitive AP Royal Oak 15202ST reference, as well as the ultra modern Royal Oak Offshore Carbon Concept tourbillon chronograph, and many others. None of these, except for the Royal Oak, were pieces I had ever had a chance to see outside of online pictures, let alone handle in person. As I left the event and headed up Howard Street in San Francisco and down 4th Street to catch my train, I passed by the famed Yerba Buena Center and then Moscone Center. I could not prevent myself from thinking that these are hallowed grounds for technology. The Apple Watch just available that week was announced right there a few months prior, and all major tech conferences are much pretty all held now at the Moscone center, including Apple’s WWDC and Google’s IO. However, what I also could not shake out of my head is that while technology certainly moves us forward and gives us plenty of useful tricks to enhance our current lives, it misses one thing that I believe is important for objects we carry with us. And that is that few technologies transcend time. Instead, they live in the present and look toward the near future. On the other hand, all the timepieces I had the pleasure of trying on today transcended this dimension that we cannot reverse. For instance, that new Royal Oak jumbo I got to try on is one of my personal grail watches. The same model, introduced some 40 years ago, helped create the icon we know today. Michael wore an exemplar (original A-series reference 5402ST) which looked as modern and beautiful as the 15202ST I got to try on that was released in 2012. And I am pretty sure that 10 or 20 years from now, the exact model I tried on will have the same emotional impact on me that Michael’s vintage had. Can one say this of the first computer we owned? Will it even work? Nope. Because digital technology only moves forward, but a beautiful timepiece is like a work of art; it lives on forever. audemarspiguet.com