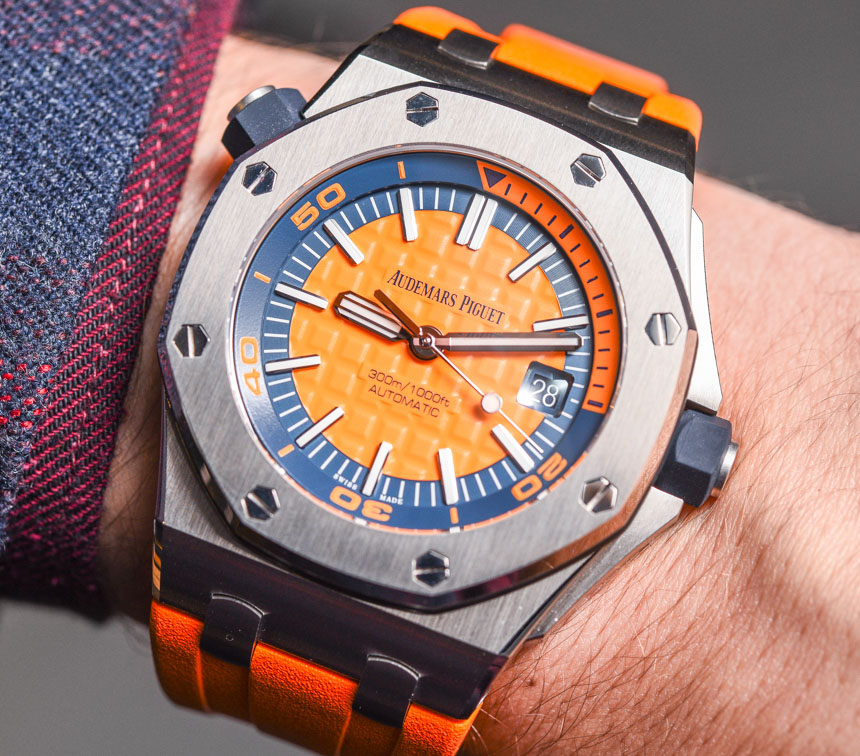 At SIHH 2017, Swiss Audemars Piguet celebrated color – which is clearly the focus for these versions of the popular Audemars Piguet Royal Oak Offshore Diver 15710ST. The independent brand’s offerings are light on novelty but rich in hue, and known as the “Funky Colour Editions.” As such, the company is likely doing what is smart this year as they continue to navigate uncertain economic waters where pouring R&D money into totally new products can be seen as a bit unwise. Despite understanding this fact of necessary prudence, it makes being a watch blogger tough since we are always hungry for annual “newness.” With that said, Audemars Piguet continues to remind myself and colleagues that our desire for “all things Royal Oak” is by no means a new feeling. 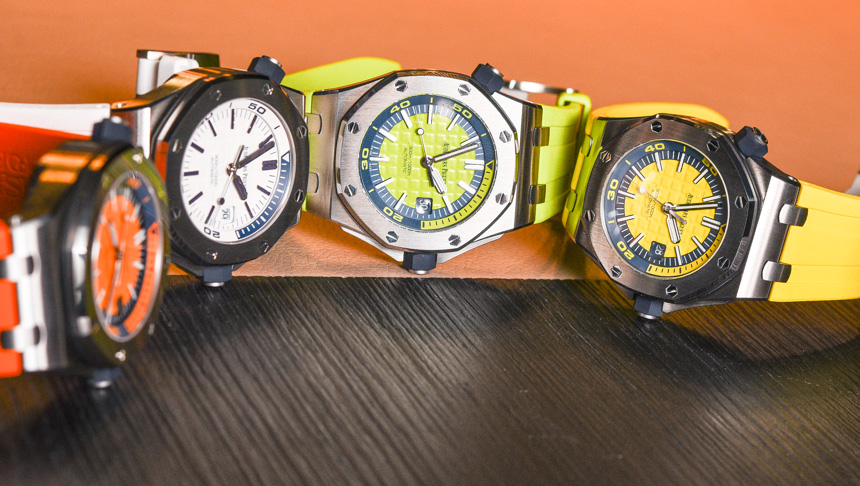 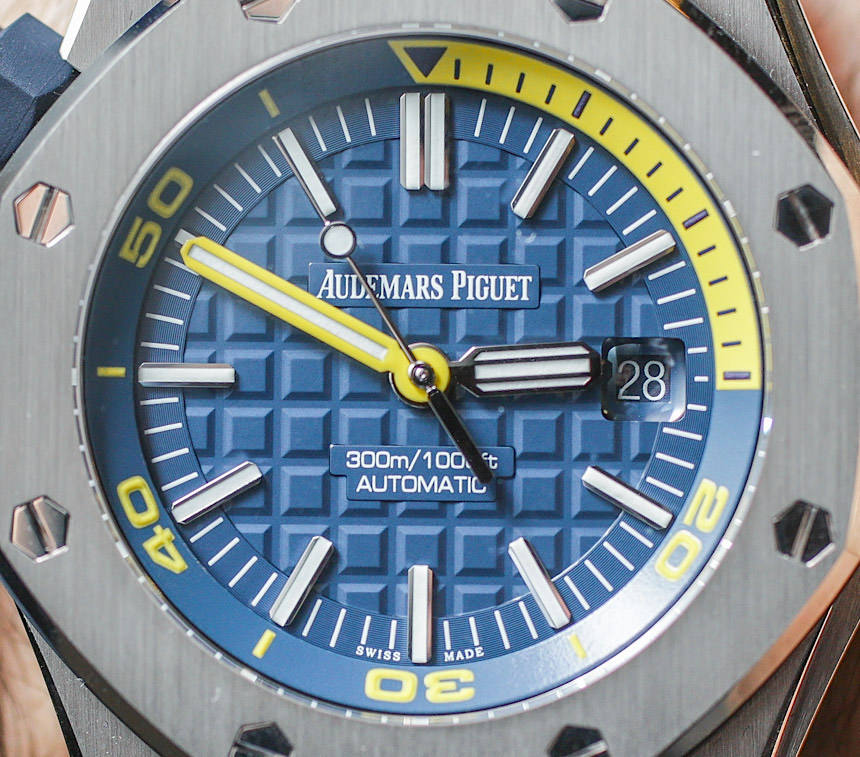 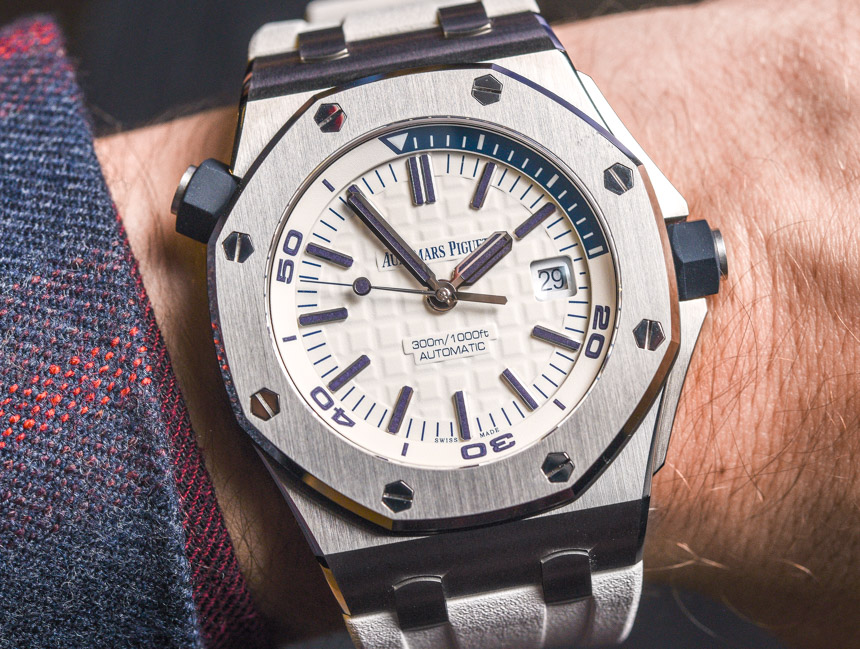 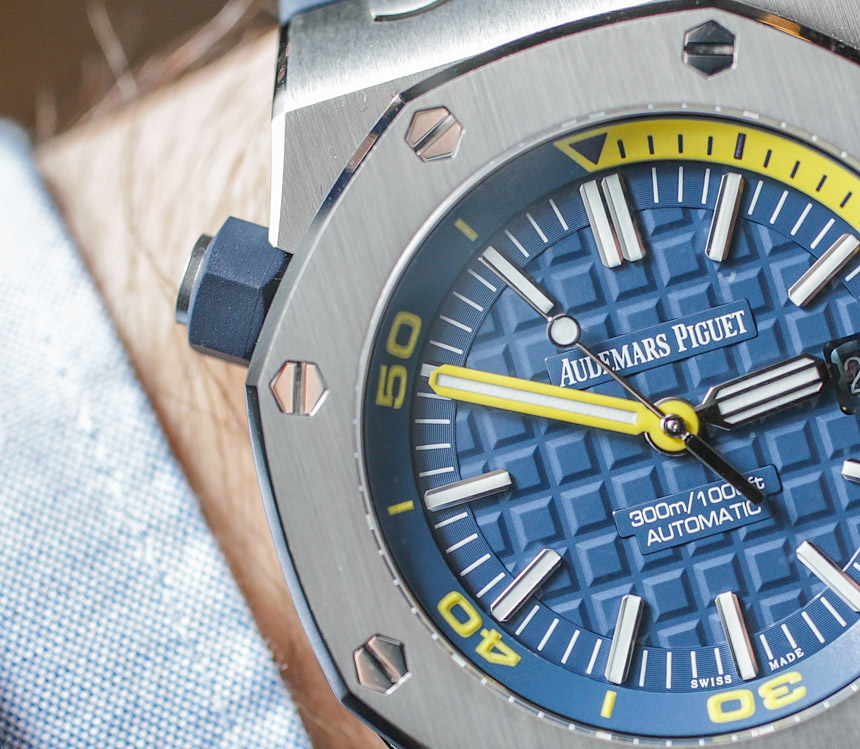 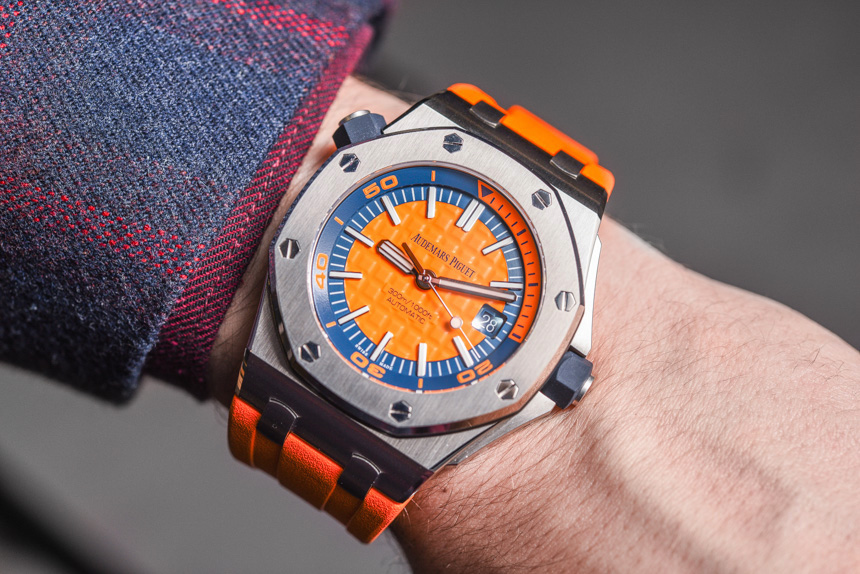 Not that any of these watches are inexpensive, but if you are going to opt for a sporty timepiece in mostly electric green, my suspicion is that spending circa $20,000 (the Royal Oak Offshore Diver) feels a bit more appropriate for something that isn’t going to be a daily wear as compared to circa $300,000 for a pure collector’s piece (the Royal Oak Offshore Tourbillon Chronograph Selfwinding Limited Edition). Most people will likely err on the more conservative side and opt for the same watches in more “classic” colors offered by Audemars Piguet. Then again, if you live a lifestyle where you can pull-off one of these colorful Audemars Piguet Royal Oak Offshore Divers as your daily wear, then more power to you. 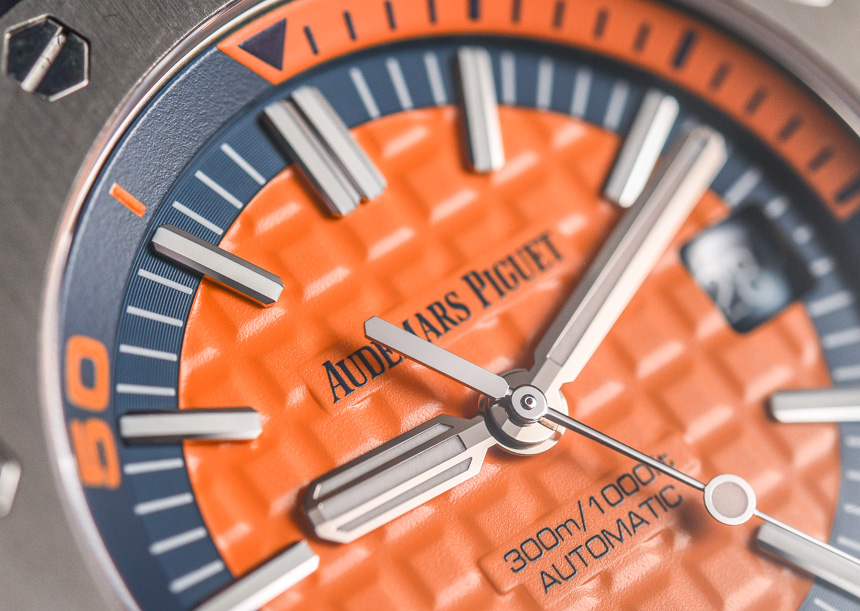 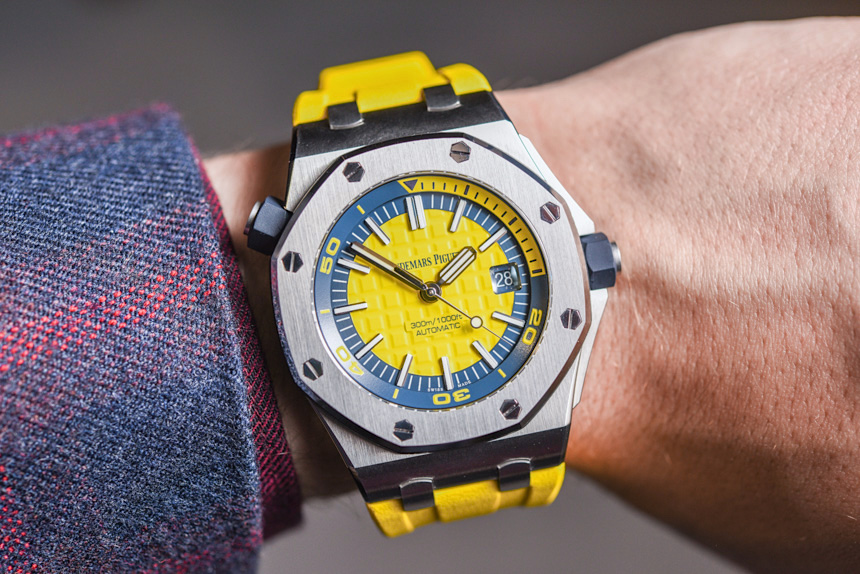 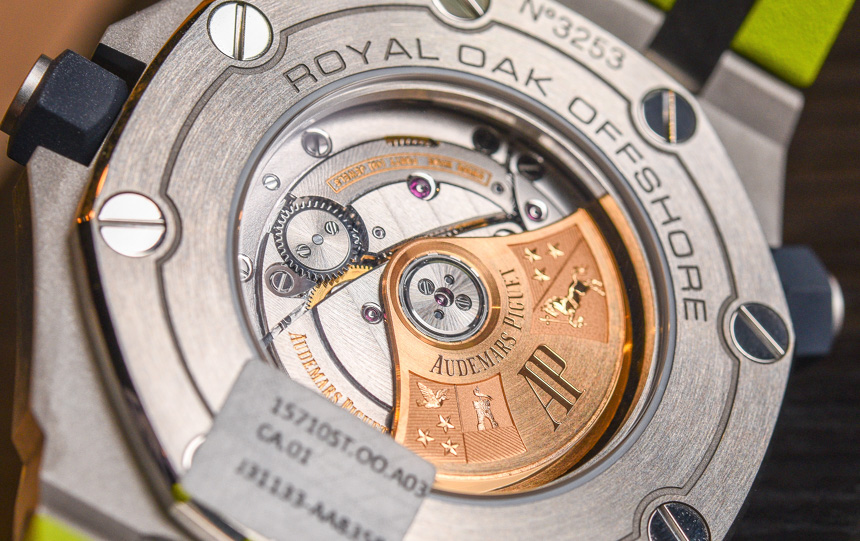 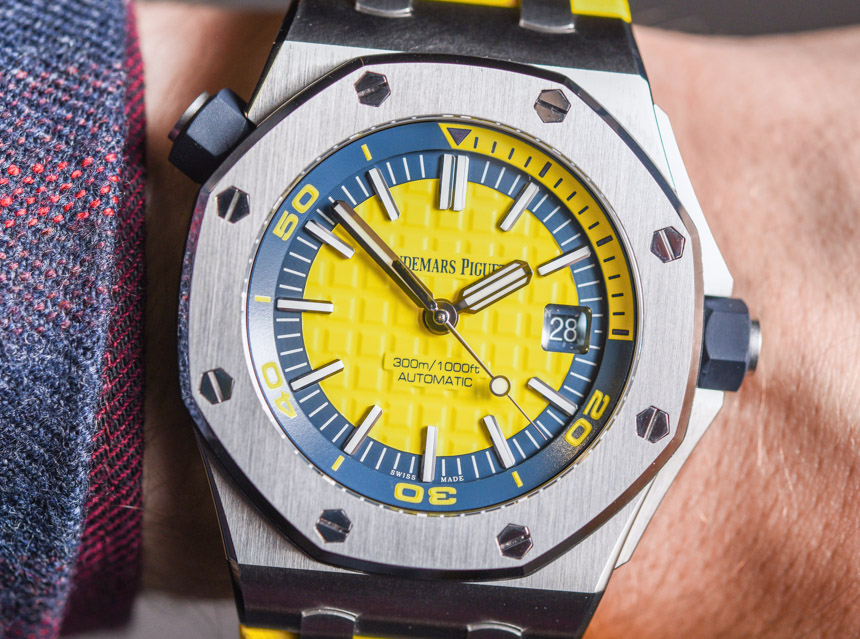 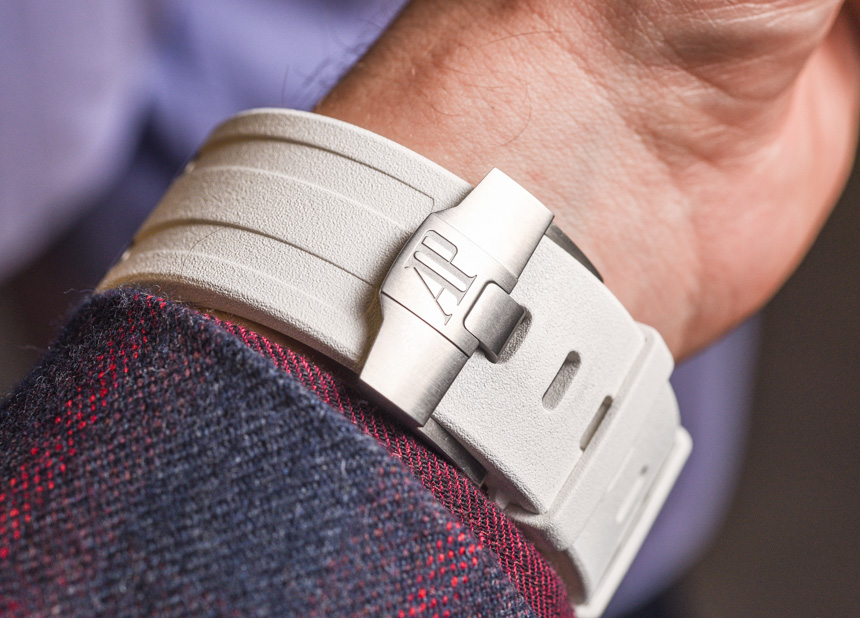 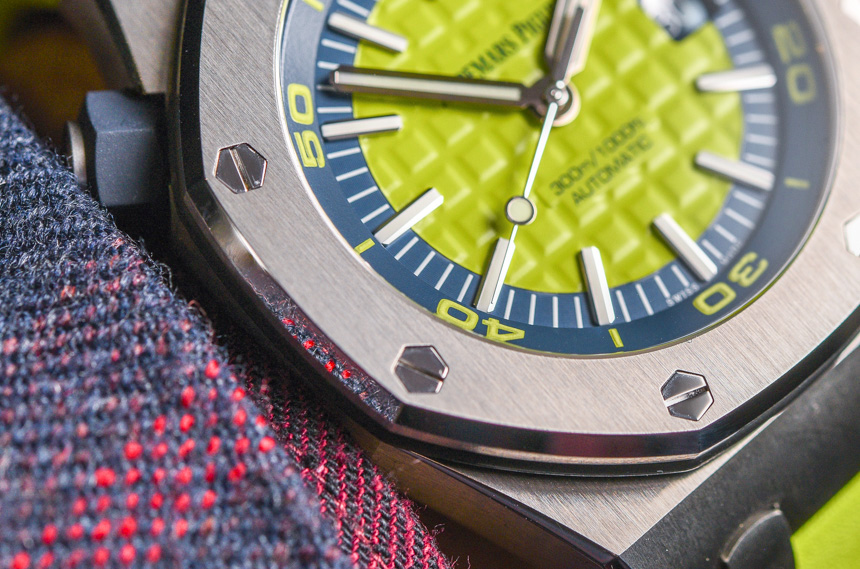 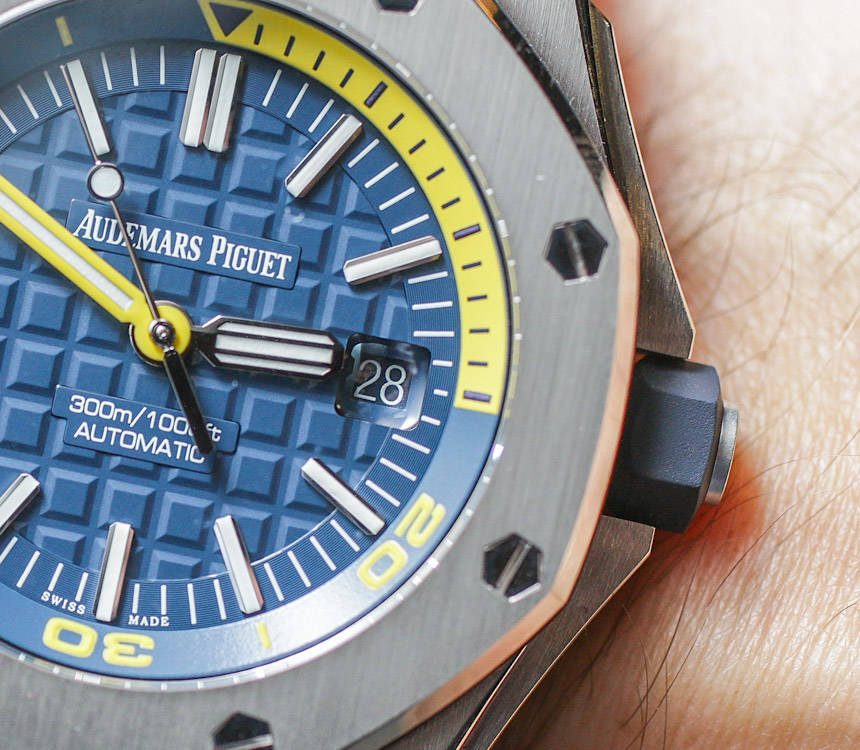 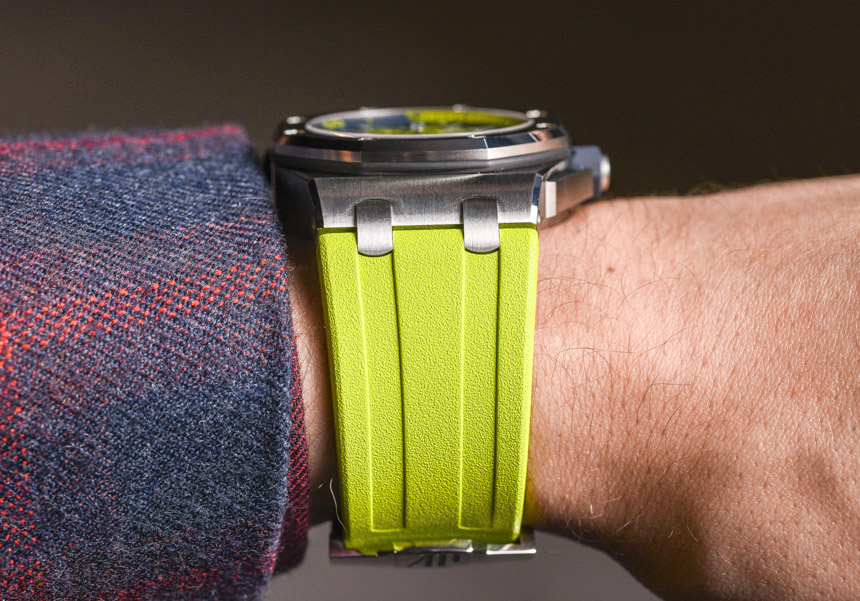 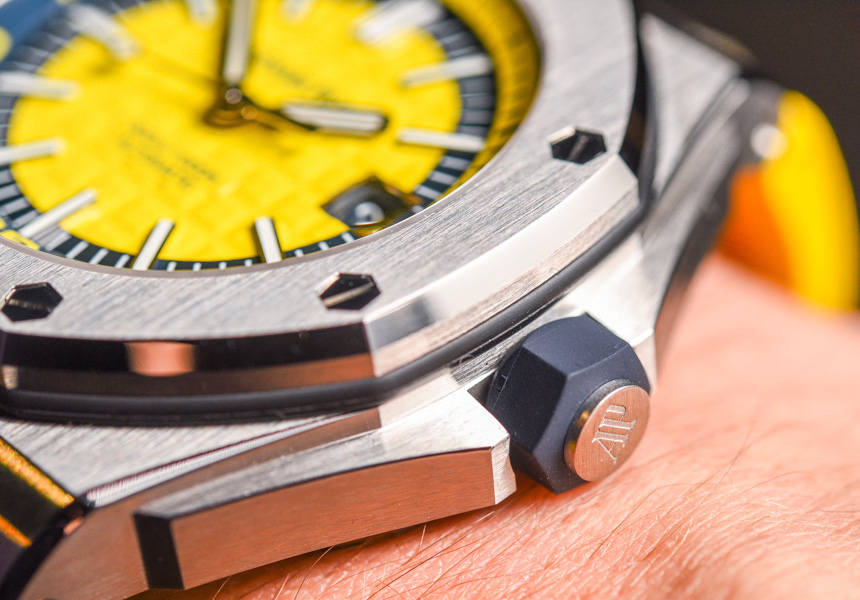 Each of the models comes in a finely finished 42mm-wide steel case that is water resistant to 300 meters. A hallmark design element of the Royal Oak Offshore Diver is the inner rotating timing bezel which is operated by the crown located at 10 o’clock. It appears that the blue-colored crowns are coated in vulcanized rubber. Attached to the cases are extremely high-quality rubber Royal Oak Offshore tapering straps in colors to match the bold hues of the watches. Interestingly, blue is the common color across all these new models, and in order to provide a more “safely conservative” option, Audemars Piguet includes an extra blue-colored strap with each watch. The model that already comes on a blue strap gets an extra yellow strap to go with it. That 15710ST.OO.A027CA.01 piece might actually be the coolest model when on the yellow strap. 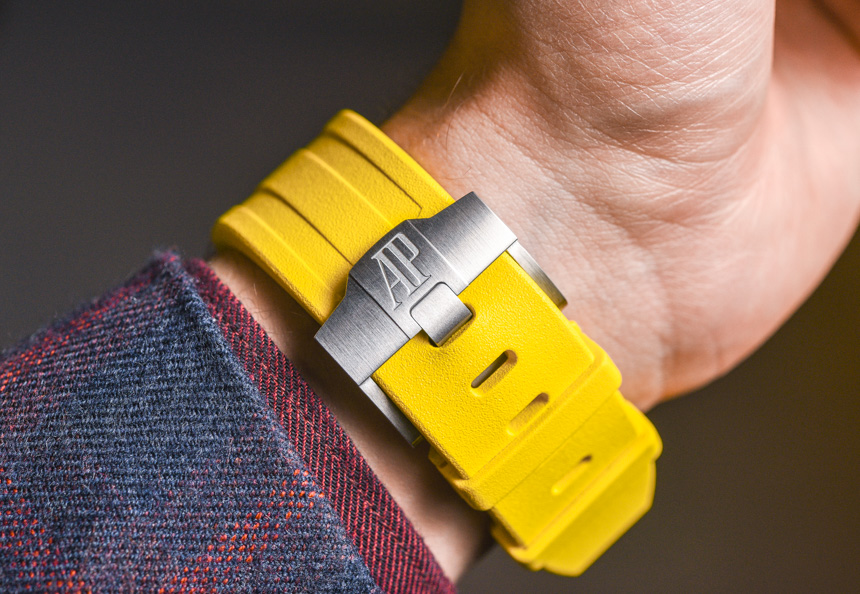 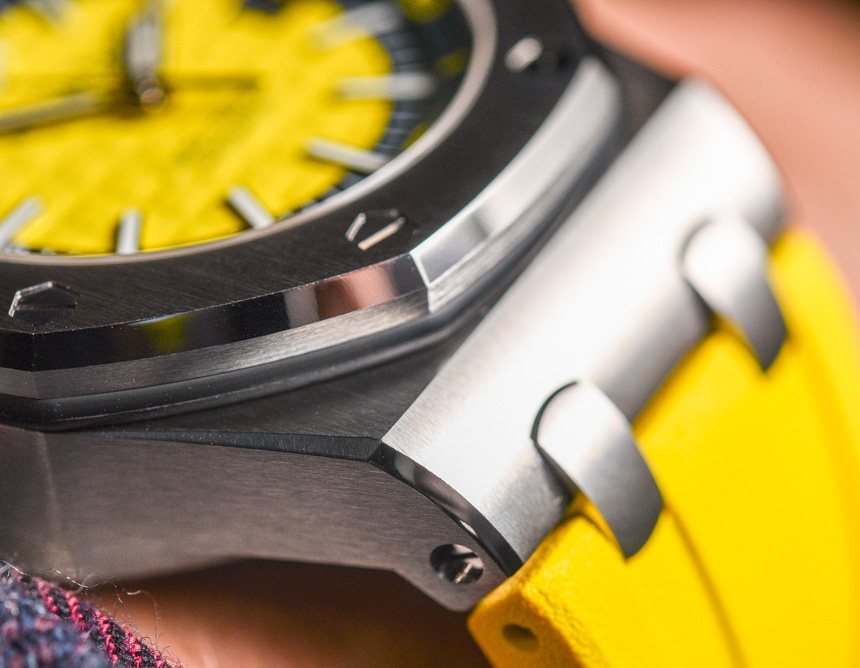 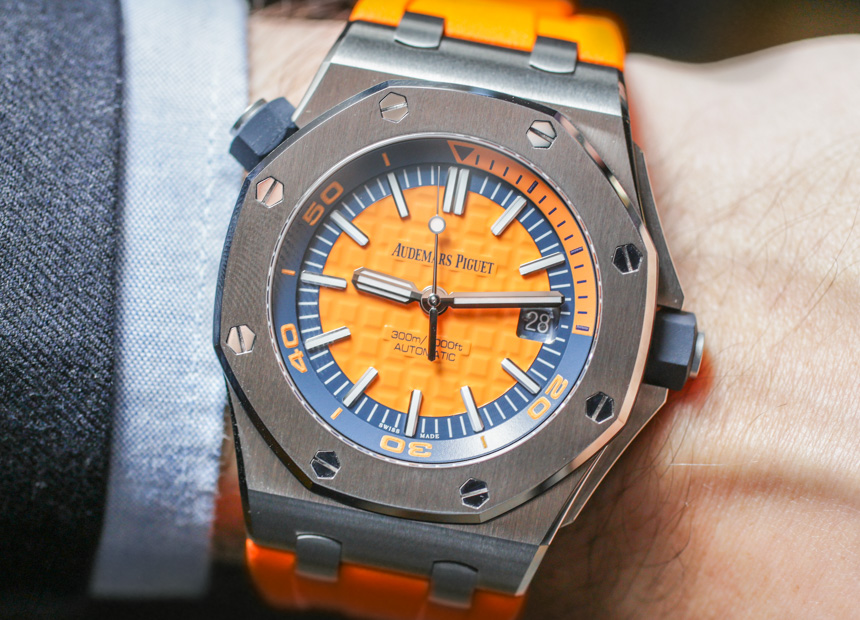 The dials are what you’d expect, save for the new colors. The Mega Tapisserie face is fitted with 18k white gold bold hour markers and very legible matching hands. The white and blue dials are likely to be the most calming to look at over long periods of time, while the green, orange, and yellow ones might be prone to causing “funky headaches” if you aren’t in the right mood to glance at such bold colors all the time. 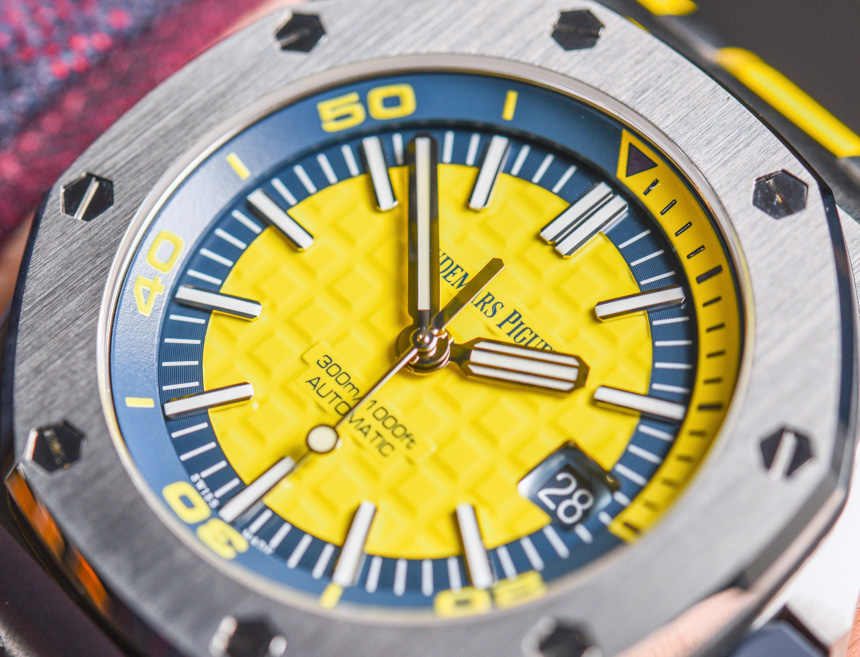 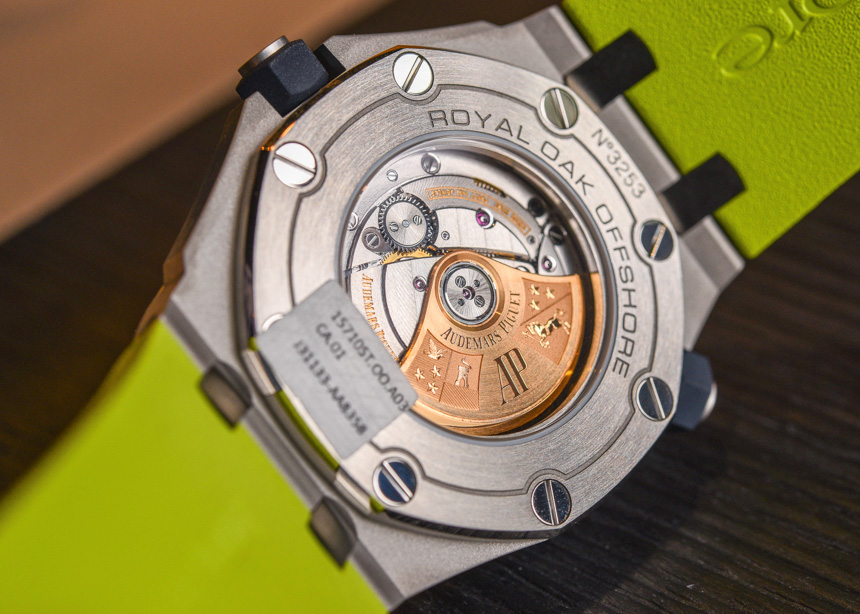 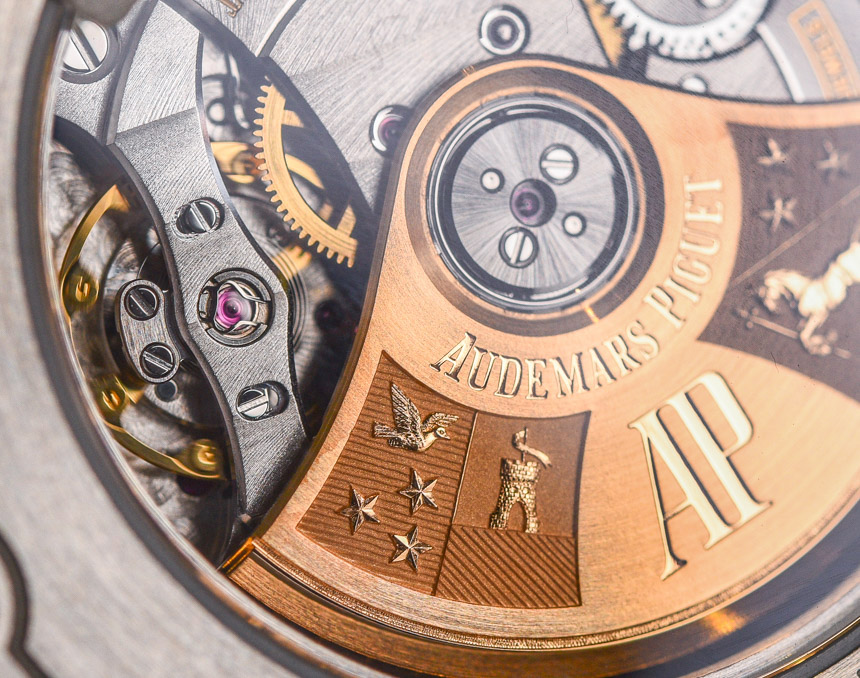 Inside the Audemars Piguet Royal Oak Offshore Diver is the Audemars Piguet caliber 3120 automatic movement. It operates at 3Hz (21,600bph) with a power reserve of 60 hours. These always have a lovely degree of finishing and decoration, and Audemars Piguet has maintained the 300m water-resistance while offering a sapphire crystal display caseback with a view of the movement and engraved 22k gold rotor. 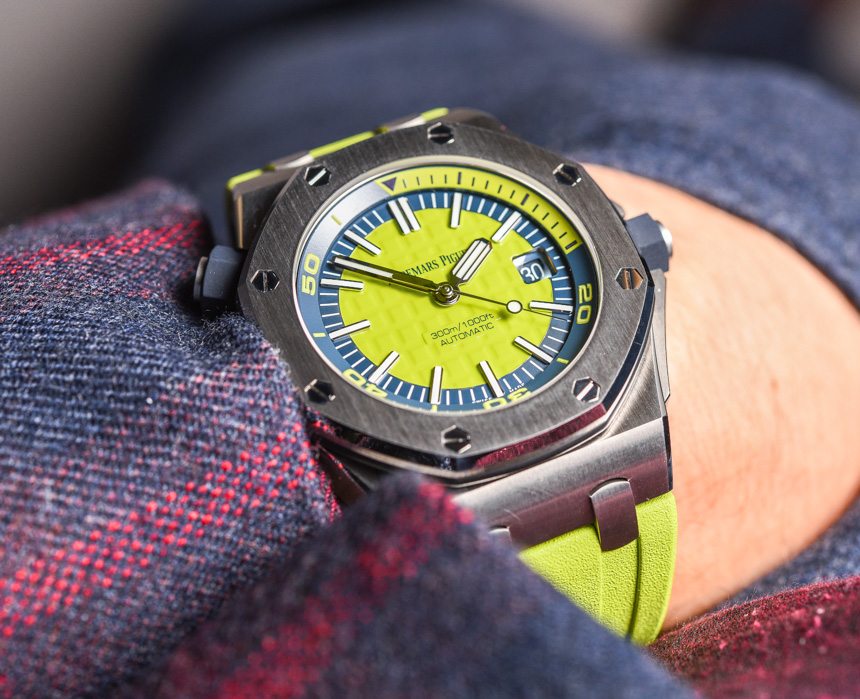