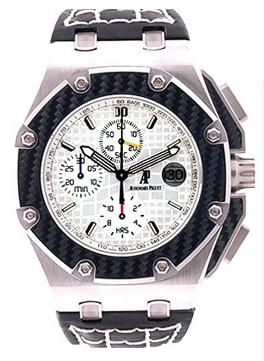 Audemars Piguet is pissed. If you’ve been watching the brand for the last 10 years or so, you’d notice a lot of Formula 1 themed limited edition watches in the Royal Oak Offshore collection. Seeing them could easily lead you to believe that Audemars Piguet (AP) and F1 has some type of bond. And recently that relationship ended. Hublot – yet again- took out from under AP’s noses, a valuable sponsorship including that with F1. Audemars Piguet is still pissed about it. While it will take a lot time before Hublot can match the movement quality and consumer perception of AP, they are quickly nabbing up partnerships that AP was one proud and secure in having.

But let’s not think about right now. Let’s look back in the past a bit. Back to when AP was in solid ties with Formula 1, and the limited edition models as a consequence of that partnership poured like gasoline in those thirsty big engines. This is one of the children of that relationship. In the past I spoke about the Audemars Piguet Royal Oak Offshore Rubens Barichello II limited edition watch. It actually shares a lot in common with this Juan Pablo Montoya limited edition pieces. Both the men were of course race car drivers at the time. Compare the two and you can see the AP designers were thoughtful of advancing this design theme. The Royal Oak Offhsore Juan Pablo Montoya two variants coming in titanium or gold. I believe it came out in 2002, during the time when Mr. Montoya was doing quick well in the F1 scene. Please be aware that this is of the most highly sought after Audemars Piguet limited edition Formula 1 watches. Actually, one of the most collectible limited edition Royal Oak Offshore pieces out there at all. Basically that means it is one of the few that is available and prices more than it likely retailed for about 8 years ago. 1000 pieces in titanium, and 500 pieces in rose gold. It is no coincidence that the race car driver’s name sounds like he is a drug lord. He is after all Colombian. If I had one of the watches, I would just let people think AP made it for a very special, very persuasive client in South America.  The watch chronograph hands are in the colors of the Colombian flag, and there is an interesting variation to the standard “mega tapisserie” dial textures. In the middle, the pattern changes to look like a race track curve, a bit like a flag, or perhaps the Microsoft Windows logo (surely the latter). The 44-45mm wide case came in titanium or steel and was made in the ‘carbon fiber’ era (as I call it). In terms of case size, I am not totally sure, but I think the gold model was a bit larger than the titanium model. The bezel on the top and sides are all inlaid nicely with carbon fiber. This also applied to the chronograph pusher housings on sides of the watch. The chronograph pushers on this model were originally meant to look like gas pedals, but have since been used so much that forget their original theme. I love the woven stitching on the alligator strap. Supposed to look like a racing suit, but (especially on the titanium model) reminds me of a Spiderman web. I believe the crown is meant to look a bit like an F1 car gas cap.

Inside the watch, and visible through the sapphire caseback window is an Audemars Piguet in-house made Calibre 2226/2840 automatic chronograph movement. Good stuff – just what to expect from AP. As a limited edition watch, I am surprised that this one actually did it’s job of being highly collectible and valuable. Too many limited edition pieces in the watch world pretty much killed that promise for most of them out there. Pricing these days on the Audemars Piguet Royal Offshore Juan Pablo Montoya limited edition timepieces run about $40,000 in titanium and about $75,000 (figures online). Not sure of recent auction results. This is pretty amazing given the pieces. Chalk it up to good design, and remembrance of a time when Formula 1 belonged to Audemars Piguet.

See one of these Audemars Piguet Royal Offshore Juan Pablo Montoya limited edition in titanium here on James List for under $40,000.