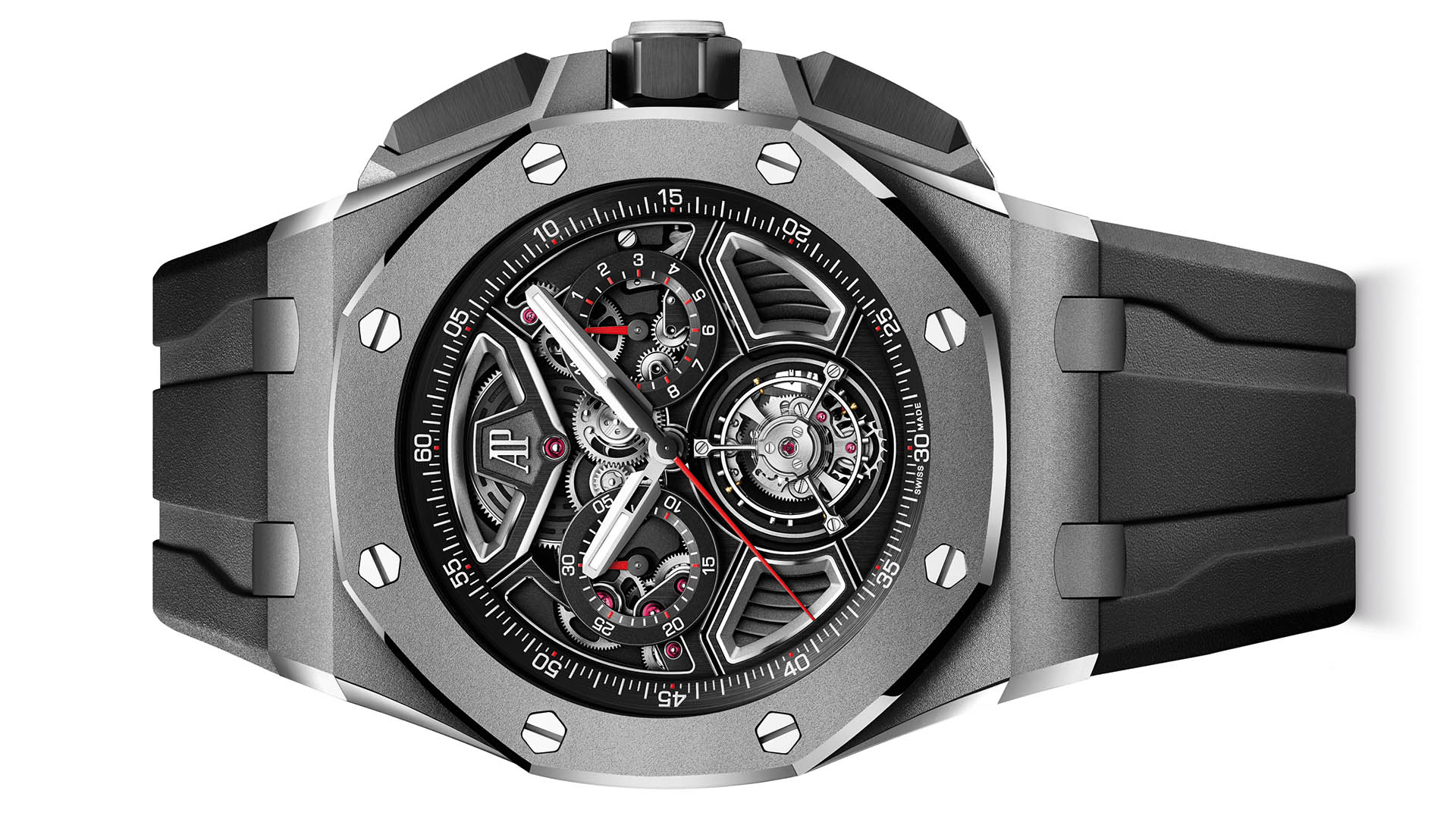 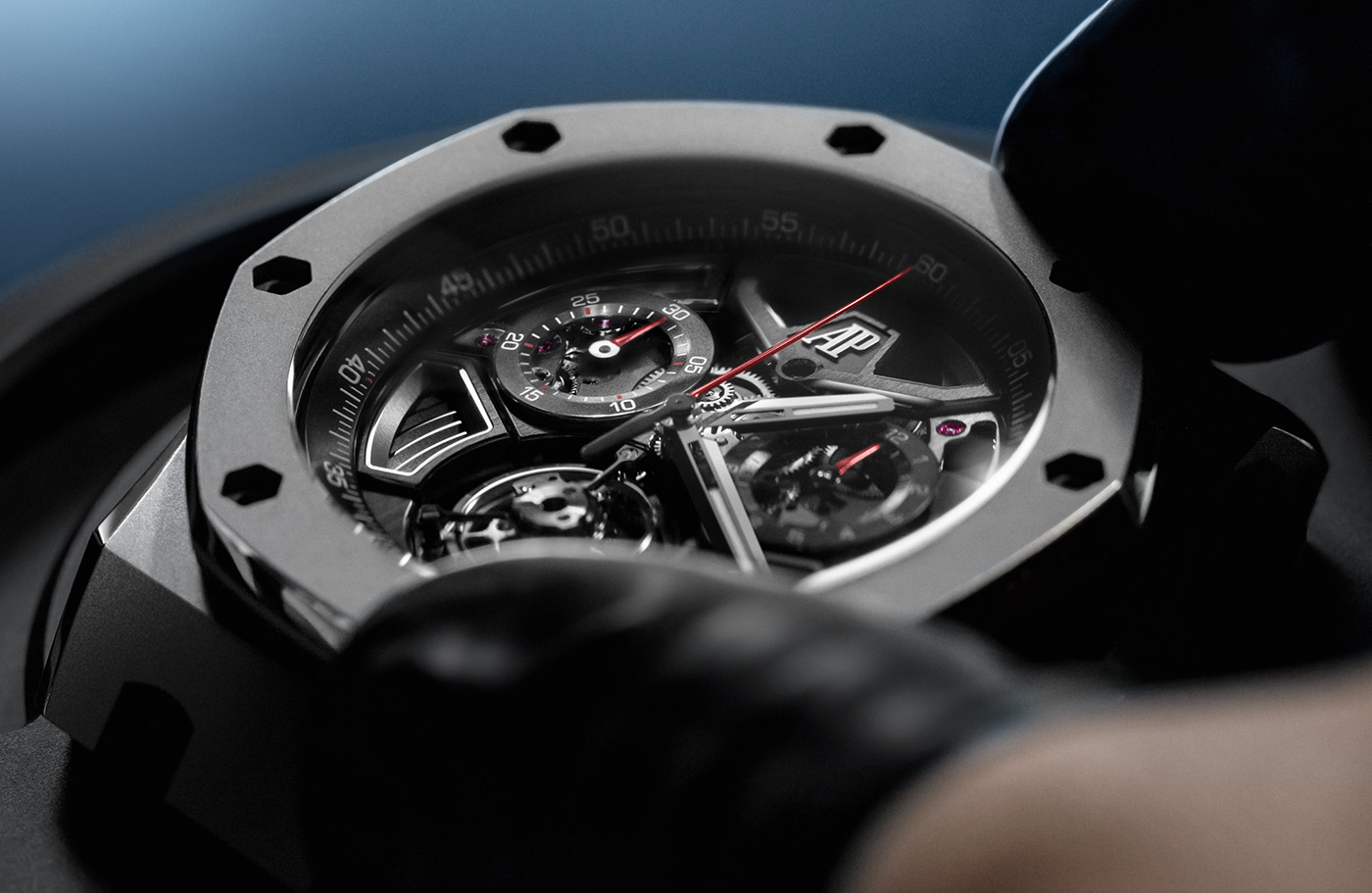 Although the mainline Audemars Piguet Royal Oak series enjoys near-universal esteem as the progenitor of the luxury stainless steel “bracelet watch,” its younger sibling the Royal Oak Offshore has historically carried a more divisive reputation. Without the weight of the standard Royal Oak’s reputation to confine it, the Royal Oak Offshore series has evolved into its own distinct entity, with a bolder, louder, and more aggressive personality than the parent line. For 2021, the brand has introduced a new flagship for the Royal Oak’s brasher younger sibling, one which combines a revised case design with a new case size and a spectacular set of complications. The new limited-edition Audemars Piguet Royal Oak Offshore Selfwinding Flying Tourbillon Chronograph offers a tauter, more muscular interpretation of the Royal Oak Offshore design alongside an ultra-modern skeletonized flying tourbillon movement. 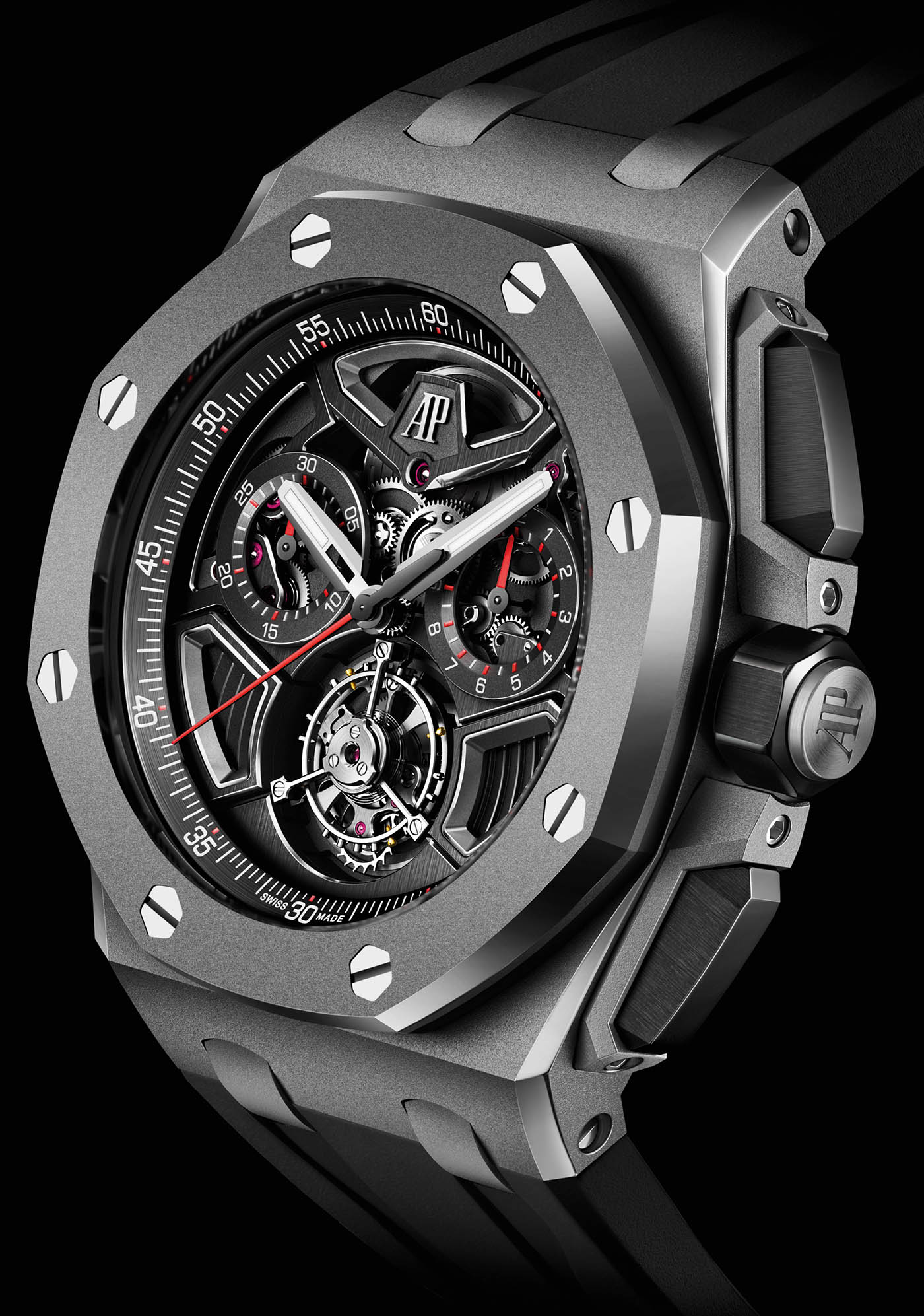 Measuring in at 43mm, the sandblasted titanium case of the new Audemars Piguet Royal Oak Offshore Selfwinding Flying Tourbillon Chronograph is immediately recognizable as a Royal Oak Offshore but evolves the concept in a more futuristic and aggressive direction. Sitting at a midpoint between existing 42mm and 44mm Royal Oak Offshore Selfwinding Chronograph models, this new case keeps signature elements like the tall octagonal blasted and polished bezel and the integrated lug design but substantially reshapes the chronograph pushers and crown guards. This new assembly is at once angular and muscular, with a taut organic flow that calls to mind modern Lamborghini in images. Wide chamfered and bead-blasted crown guards are deeply cut back to showcase heavily faceted black ceramic chronograph pushers, before sharply angling back outward to flank the octagonal black ceramic crown. Other changes to the Royal Oak Offshore formula here are subtle but also add to the sense of muscularity in the overall design as opposed to the monolithic heft found in other case variants. Perhaps the best example of this is the polished chamfer that runs the length of the case atop the integrated lugs. For this model, the chamfer tapers outward to the lug tips much more aggressively than the 42mm or 44mm cases, and this wider flowing taper introduces a brighter flash to the visual equation while helping to introduce an implied curve to this famously angular case. On the backside, the edge of the sapphire display caseback mimics the iconic Royal Oak bezel with its octagonal shape and accenting screws. While the overall new form is aggressive, strong, and extremely sporty, its actual water resistance is rated at a mildly disappointing 100 meters. 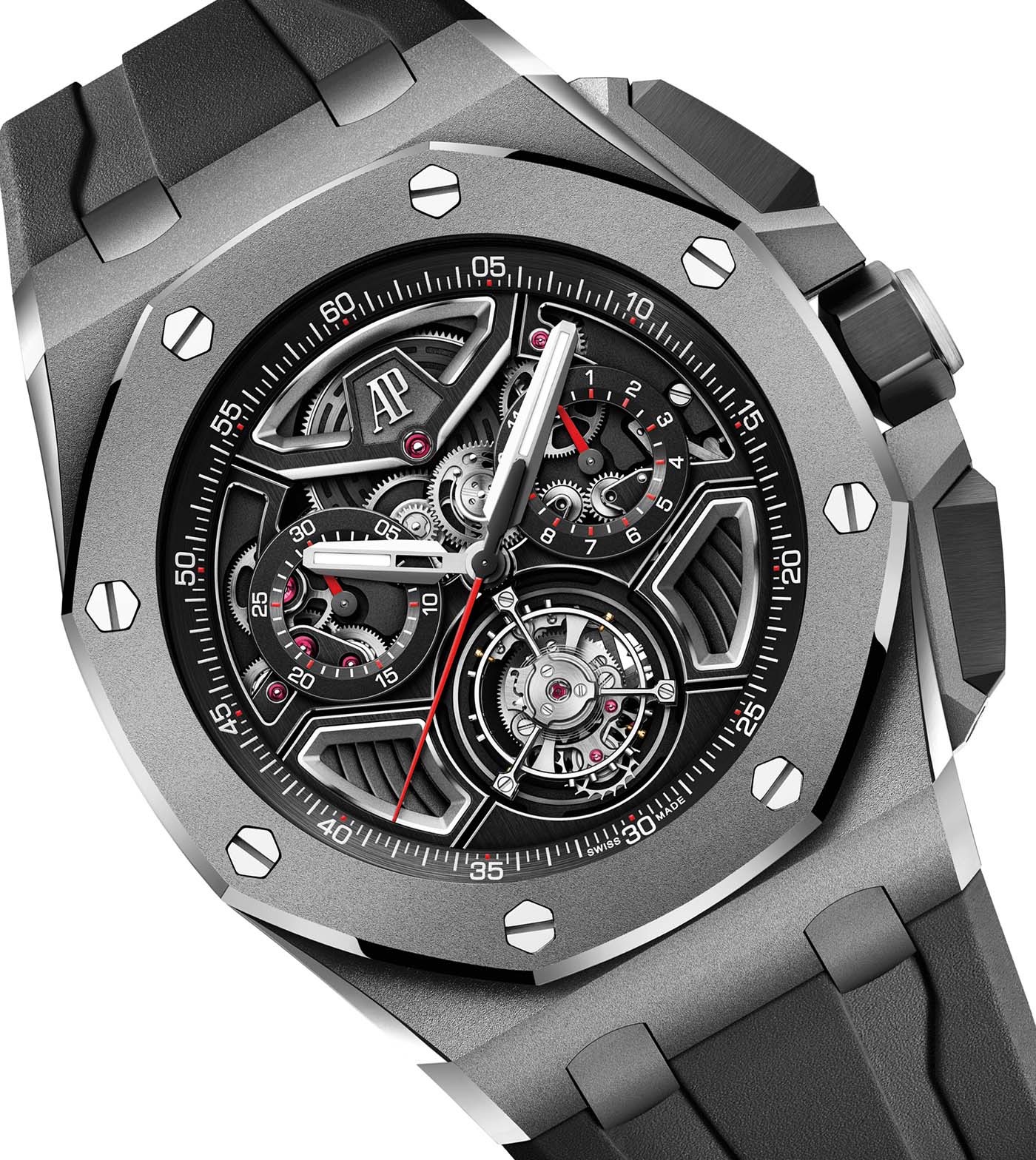 Rather than the traditional mega-tapisserie dial texture of most Royal Oak Offshore models, this new Audemars Piguet Royal Oak Offshore Selfwinding Flying Tourbillon Chronograph opts for an ultramodern skeleton treatment. Like the case, there are shades of modern supercars in the skeleton design, particularly in the wide chamfered bridges flanking the 6 o’clock flying tourbillon and the vent-like ridged structure of the movement plate beneath. The brushed black titanium main surface of these bridges and the overall simplicity of the bridge layout keep the visual focus on the timekeeping elements in initial images, with the mainspring barrel and brushed gear train elements forming a visual backdrop for the top half of the dial. With its oversized form, uncluttered surroundings, and framing bridges, the flying tourbillon at 6 o’clock forms a natural visual centerpiece, with a slim three-pronged tourbillon cage that showcases the inner workings of the escapement as much as possible. To aid legibility against this skeleton background, all elements of the flyback chronograph are highlighted in bold fire engine red, including the central chronograph seconds hand and the hands of the off-axis skeleton subdials. Bright polished 18k white gold helps the skeleton paddle handset stand out against the predominantly black backdrop as well. 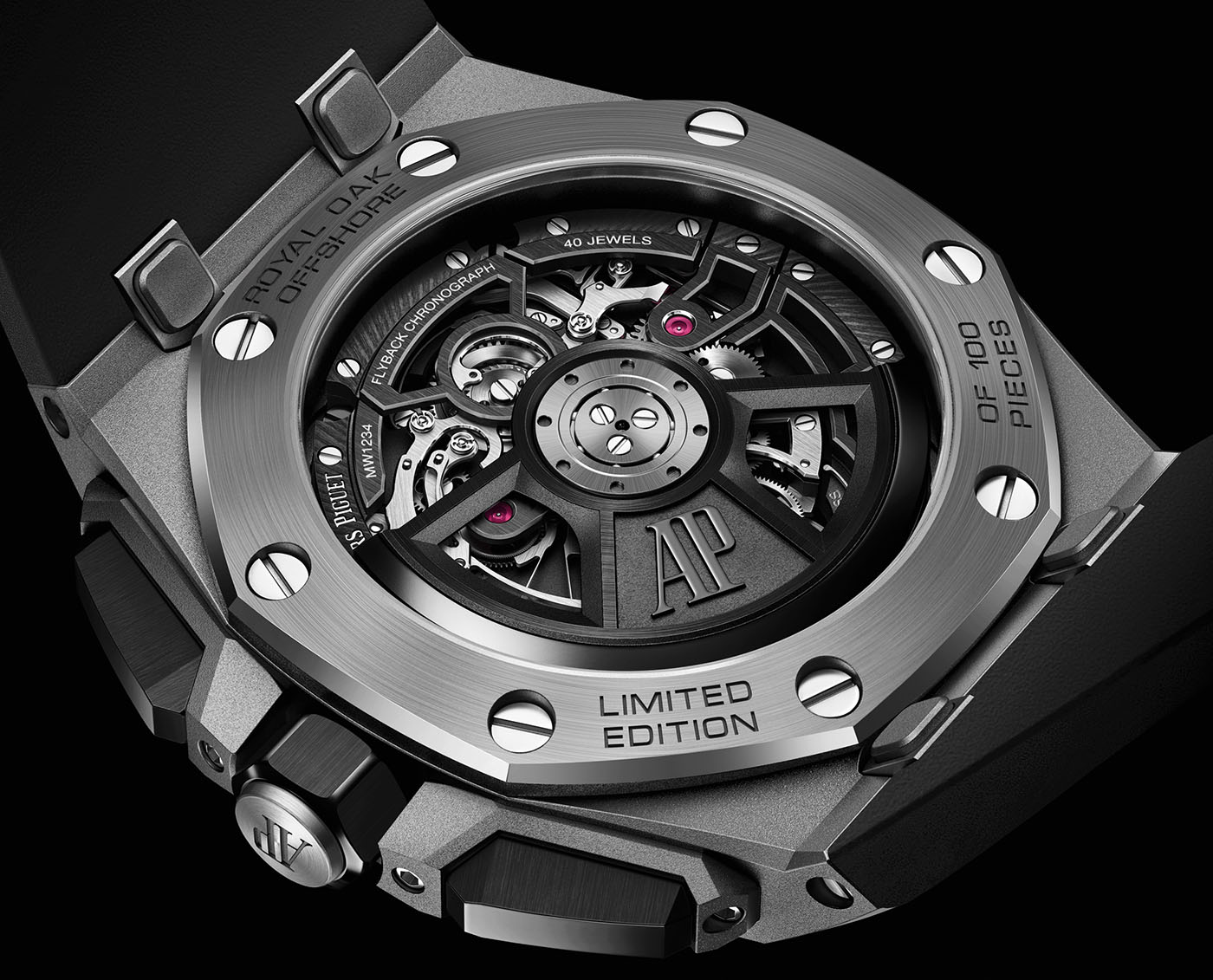 With one of the brand’s most striking modern movements and a muscular new evolution of the classic Royal Oak design, the new limited-edition Audemars Piguet Royal Oak Offshore Selfwinding Flying Tourbillon Chronograph is an aggressive new flagship for the line and a potential look forward at the stylistic future of the Royal Oak offshore series. Only 100 examples of the new Audemars Piguet Royal Oak Offshore Selfwinding Tourbillon Chronograph will be made. MSRP for this model stands at 242,100 CHF. For more details, please visit the brand’s website.