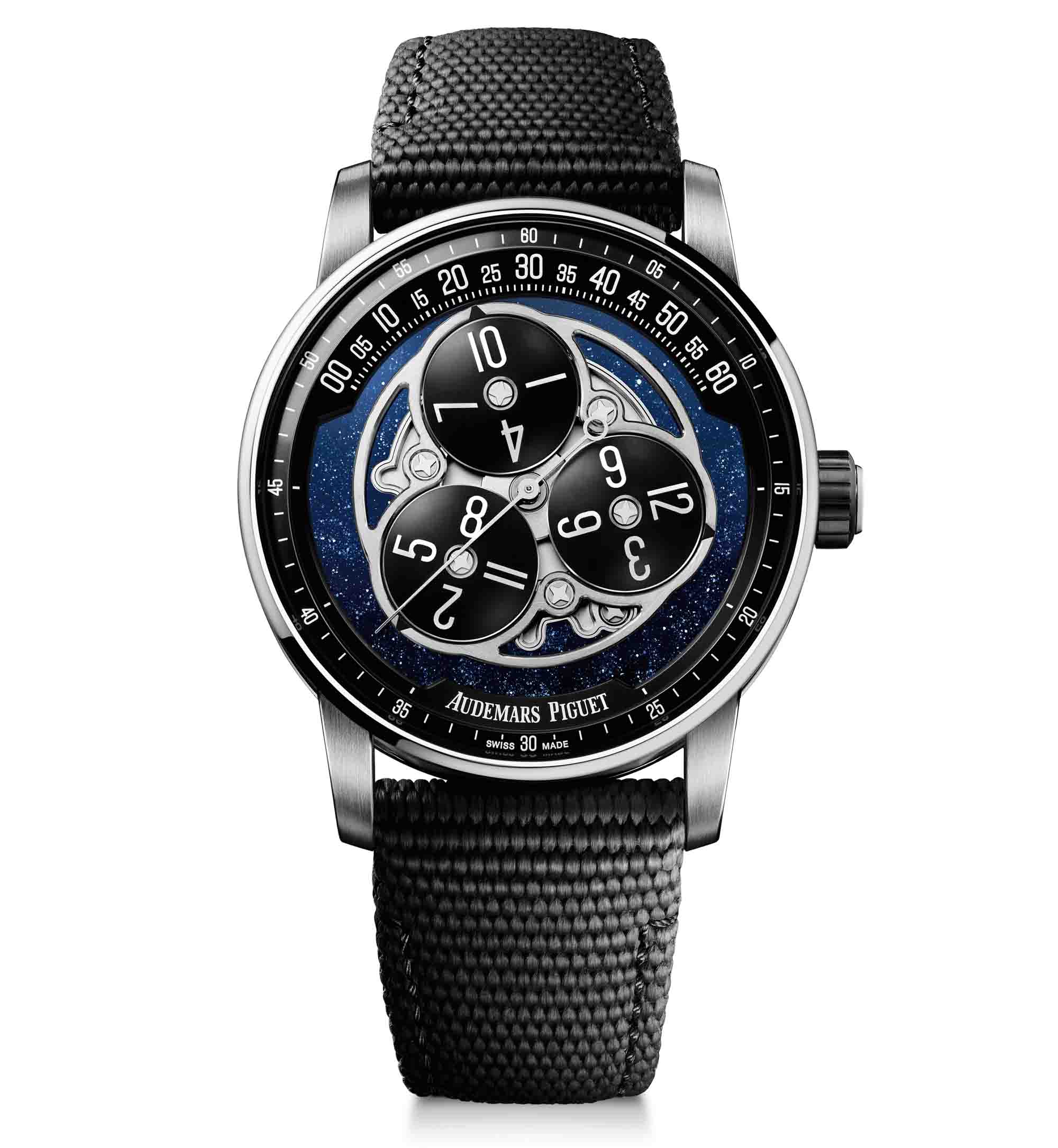 When Audemars Piguet first introduced the Code 11.59 series in 2019, the new collection was met with a split opinion from the public. However, it was almost always destined to receive a mixed reaction, simply because it was not a Royal Oak. That said, it was ultimately crucial for Audemars Piguet to release a completely new and different collection of watches, as it needed to make that radical first step in the process of clawing its way back from being almost entirely synonymous with the iconic design of the Royal Oak. In the years since the AP Code 11.59 first made an appearance, a number of different variations have been released, and in my personal opinion, some of the most successful iterations have been the more complex and unconventional examples. It is often these that best complement the deceptively intricate case design that defines the collection. The latest addition to the lineup is arguably the least conventional version of the Code 11.59 that AP has put forward yet. The new Code 11.59 by Audemars Piguet Starwheel takes the signature case of the collection, crafts it from contrasting materials, and then fits it with a wandering hours display and blue aventurine dial. 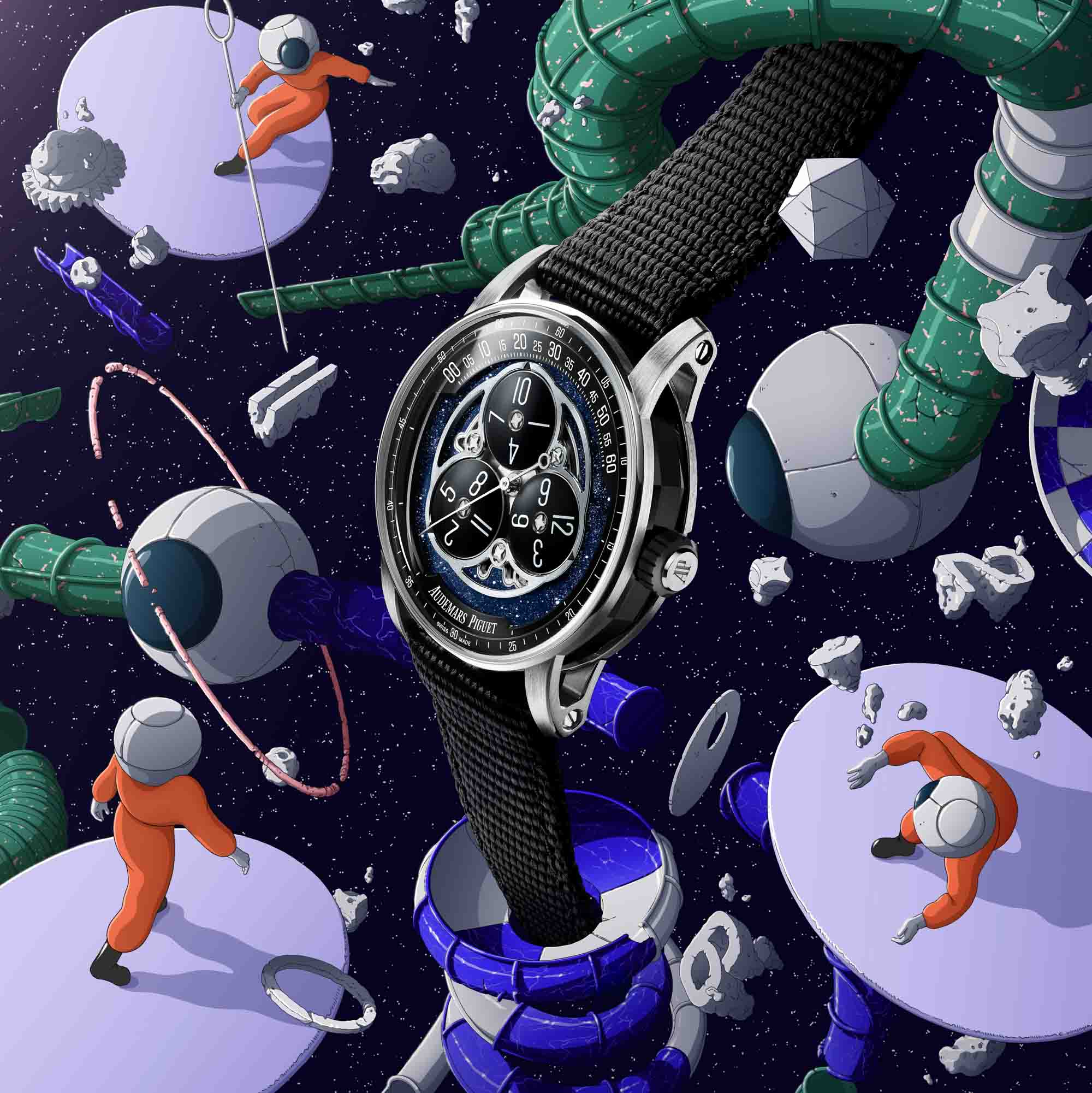 The 41mm case measures 10.7mm-thick. Its profile will be immediately identifiable to those who are familiar with the Audemars Piguet Code 11.59 collection, with its skeletonized lugs and octagonal middle case, which is sandwiched by a rounded bezel and circular caseback. At a quick glance, the case looks like a traditional circular watch; however, upon closer inspection, it becomes clear that it actually offers quite a complex and nuanced design. On the new Code 11.59 by Audemars Piguet Starwheel, the bezel, lugs, and caseback are all crafted from 18k white gold, while the middle case and crown appear in black ceramic, with the octagonal shape of the middle case consisting of polished bevels and satin-finished surfaces. The use of white gold and black ceramic creates both an aesthetic and material contrast, as gold is heavy, soft, and traditional, while ceramic is light, hard, and thoroughly modern. Like other models from the collection, a signed push-pull crown works with the screw-on display caseback to create 30 meters of water resistance, while the dial is protected by a unique double-curved sapphire crystal. In this instance, “double-curved” means nothing even remotely close to “double-domed” (as you often see it used in relation to the convex crystals fitted to dive watches). While its internal surface is shaped like a dome, it is also vertically curved from 6 to 12 o’clock. The two opposing directions provide it with a striking appearance that adds a lot of dimension to the dial, yet this is something that rarely gets fully conveyed in the brand’s own photos. 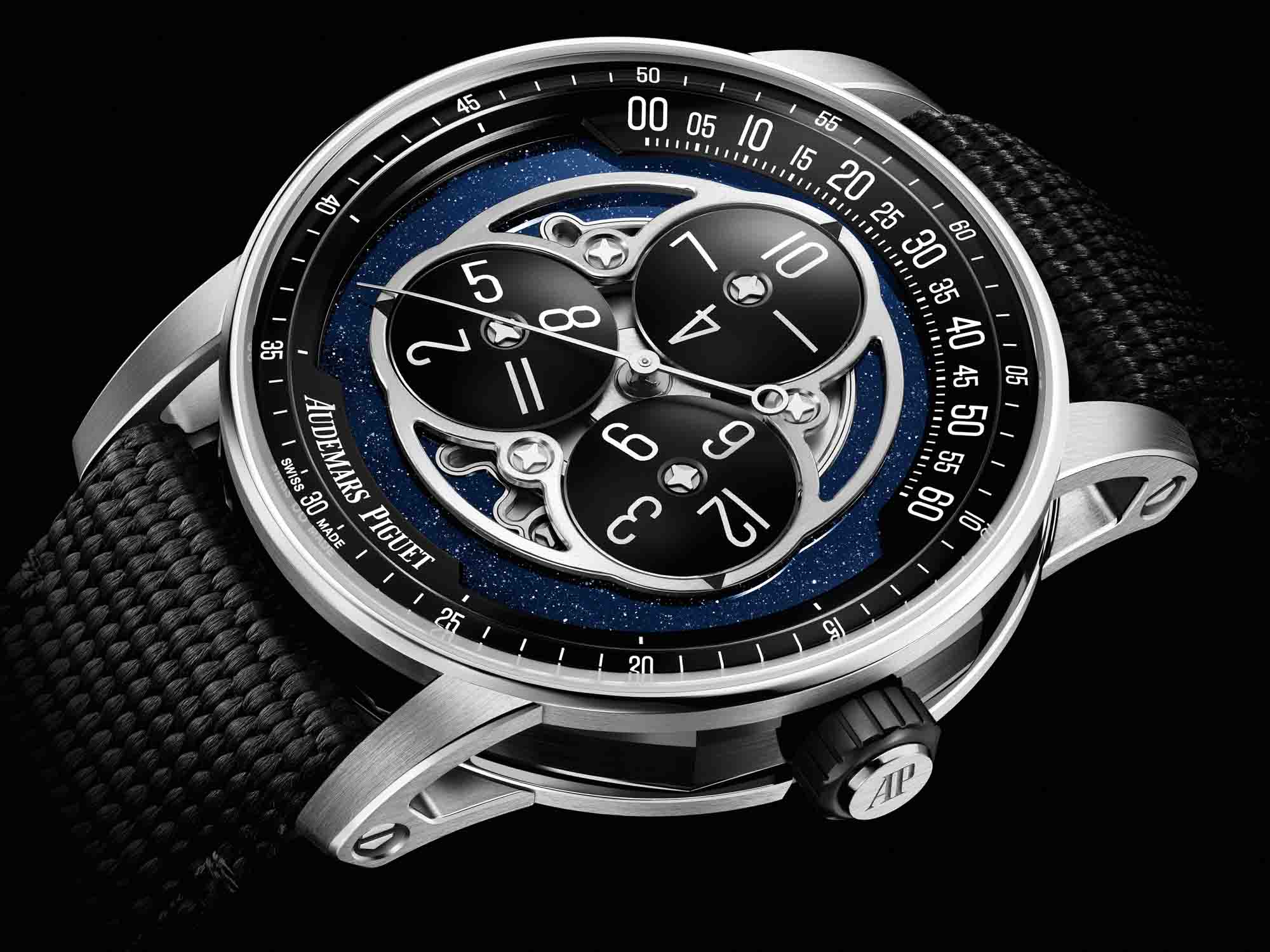 While the case of the new Code 11.59 by Audemars Piguet Starwheel offers a novel combination of materials, it is the dial of this watch and the way that it displays the time that are ultimately its most noteworthy features. Set against a blue aventurine backdrop is a three-dimensional wandering hours display that continues the tradition of the wandering hours “Star Wheel” watches that Audemars Piguet produced during the 1990s. Audemars Piguet reimagines this complication as the new party piece for the Code 11.59 collection. Each of the three slightly domed black discs is crafted from black PVD-treated aluminum and contains four of the twelve hour indicators. The discs all rotate along their own axis, and as the entire central module rotates throughout the day, the current hour will be displayed by the numeral sitting at the top of the dial. The corresponding minutes are indicated by the small black triangle next to the current hour, which points to the minute value against the arc-shaped minute track located at the top of the watch. Aside from the blue aventurine surface of the background, all of the rest of the dial elements appear in a monochromatic tone of black and white to compliment the case. The centrally-mounted seconds hand is crafted from 18k white gold and features a curved tip to complement the domed profile of the three discs that sit below it. 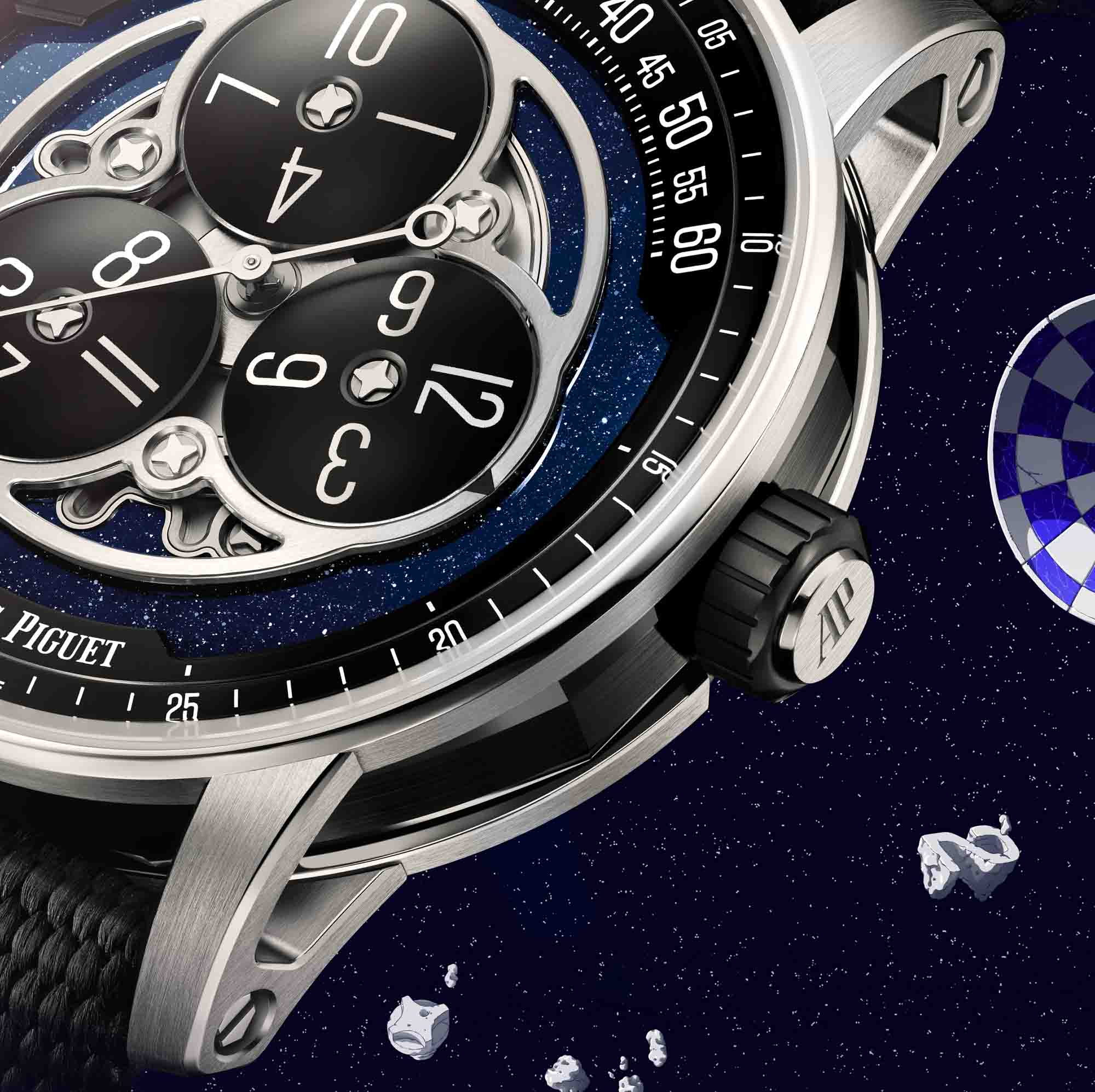 Making the wandering hours display of the Code 11.59 by Audemars Piguet Starwheel is the brand’s self-winding Caliber 4310 movement. Based on the Caliber 4309 but with the addition of a new module to provide it with its signature unconventional display, the Caliber 4310 is a 32-jewel movement consisting of 261 parts, which runs at a frequency of 28,800vph (4 Hz) with a power reserve of at least 70 hours. The central module makes one full rotation of the dial once every three hours, while each of the three black discs rotates independently to compensate for their changing position, with the current hour always displayed right side up at the top of the dial. The movement itself is impressively finished (just as you would expect from Audemars Piguet). Winding the movement is a skeletonized oscillating weight made from 22k pink gold, with all of this sitting on display through the watch’s sapphire crystal caseback window. Completing the new Code 11.59 by Audemars Piguet Starwheel is a textured black rubber-coated strap with an 18k white gold pin buckle that is engraved with the Audemars Piguet logo, rather than the normal AP monogram that appears on other clasps and buckles from the collection. 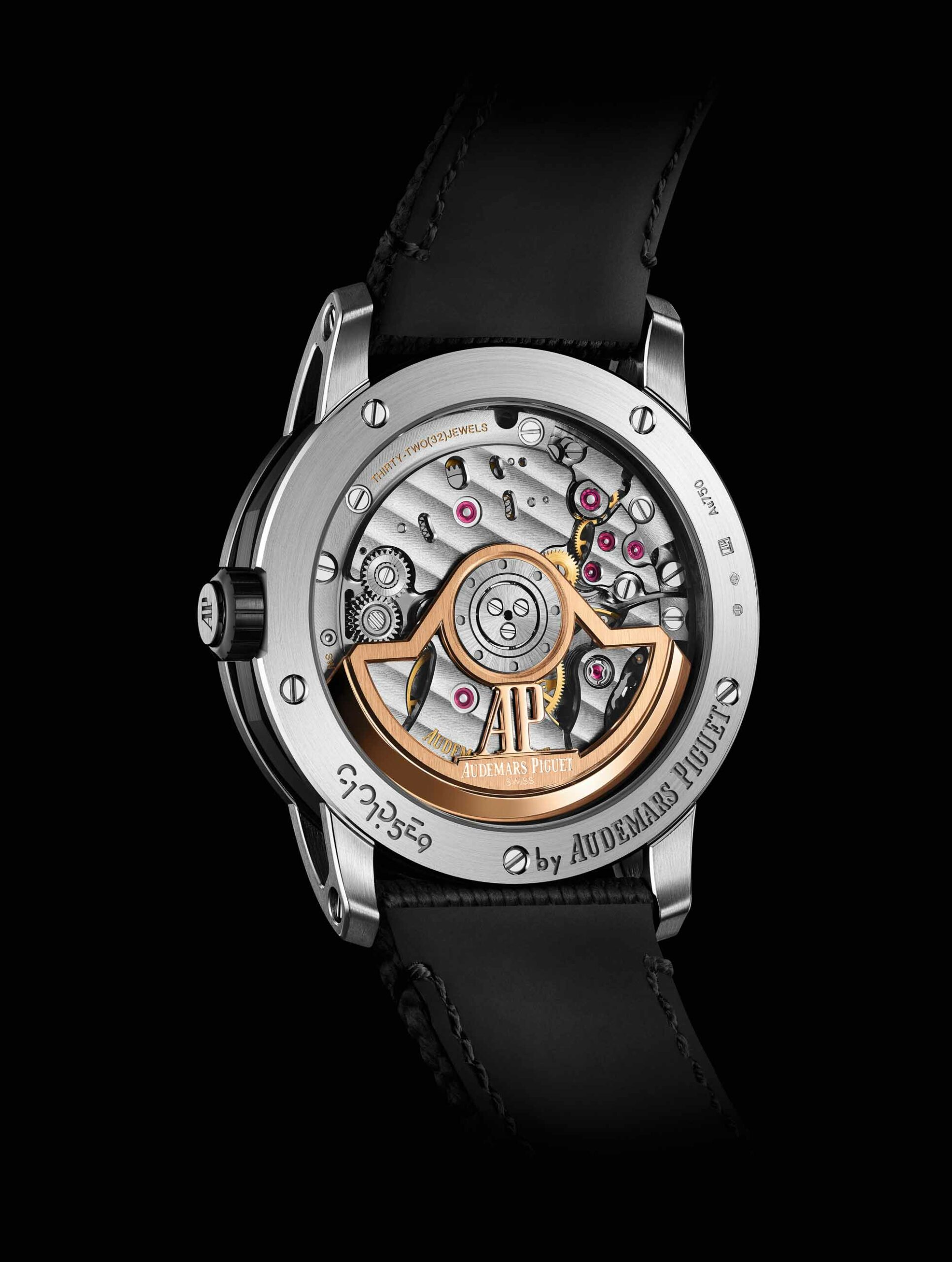 Just like the Royal Oak, the Code 11.59 is inherently slightly divisive in its core design, although even those who aren’t fans of its particular aesthetic can still appreciate the complexity of its case construction. That said, some of people’s biggest objections to the series as a whole have been with the dial designs chosen for some of the less intricate models. The recent releases that have embraced significantly more complex designs such as the Perpetual Calendar and Tourbillon Openworked models have been met with a much warmer overall reception (and accompanied by significantly higher prices). That said, with an official retail price of $57,900 USD, the new Code 11.59 by Audemars Piguet Starwheel is significantly less expensive than any of the tourbillon or perpetual calendar models, and it represents only a small increase in price compared to the chronograph versions. From an aesthetic standpoint, this represents a significant departure from the modern Audemars Piguet brand that we have come to know in more recent years, although it is not completely without precedent when you look at some of the models that exist within the company’s archives. Realistically speaking, it’s highly likely that the Royal Oak will always be the fan-favorite of Audemars Piguet’s catalog, but models such as the new Code 11.59 Starwheel show that the famous Swiss manufacturer should be known for a lot more than just its mega-popular stainless steel integrated bracelet sports watch. For more information, please visit the brand’s website.