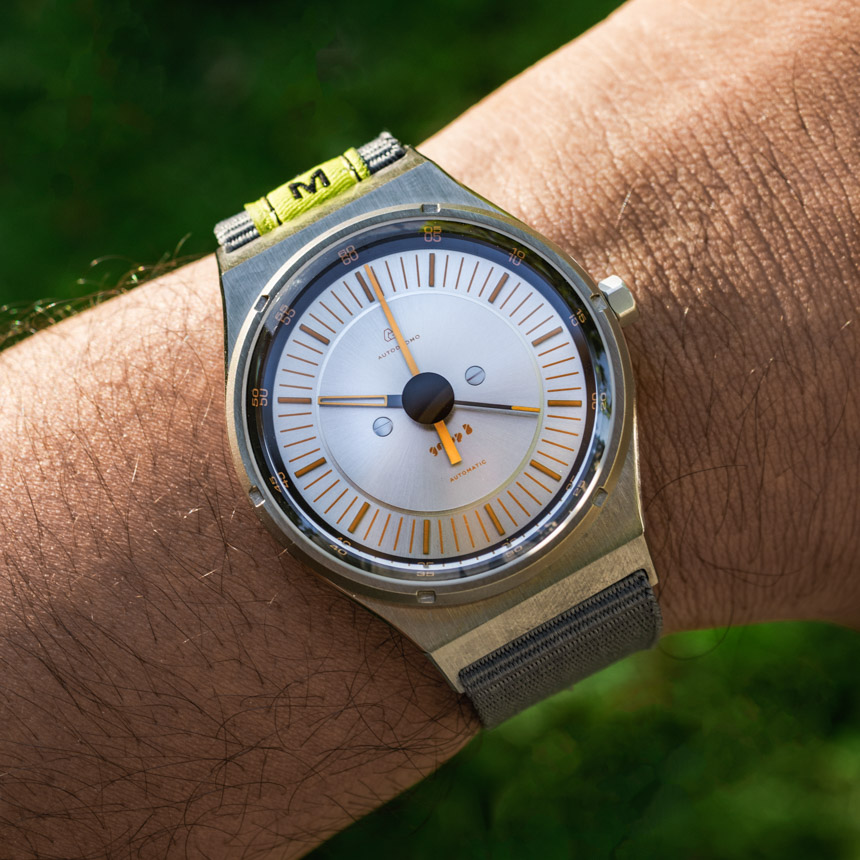 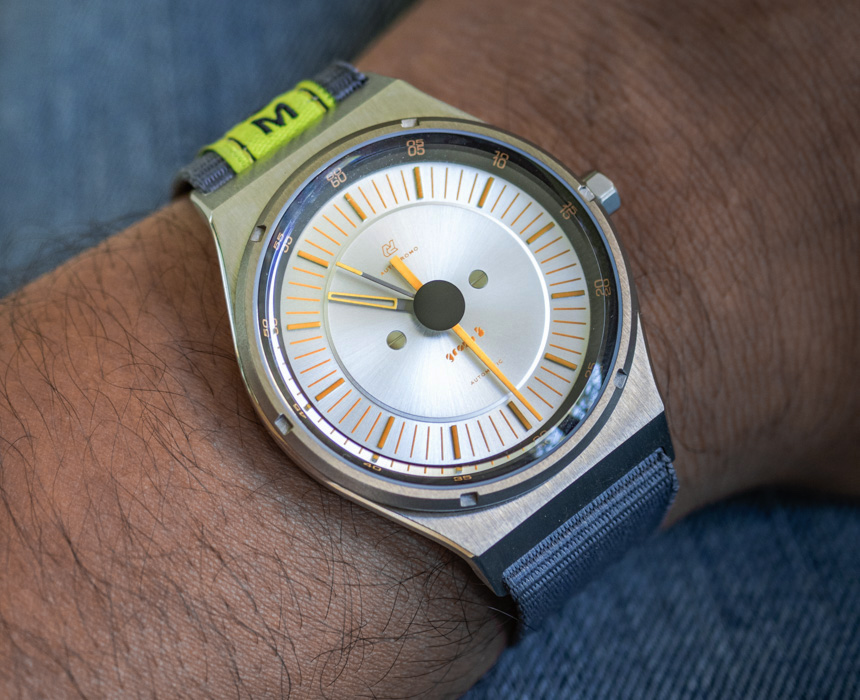 Autodromo, the American micro brand, has built a reputation for making modern, motorsport-inspired timepieces with unique materials and design. Recently, the brand launched a new variant to its Group B line – the Autodromo Group B Silver/Yellow. Unique to this reference is the color scheme which is a significant departure from the other Group B models. I’ve been enjoying the Group B for a couple of weeks now and my first encounter with an Autodromo in the flesh has left a positive impression.

The Group B watches were designed and named after the Group B era of racing, which enjoyed a short but crazy few years of fame in the ’80s. Underscored by the use of exotic materials, questionable spectator safety standards, and plenty of turbocharged horsepower, Group B racing was as much about the romance of the sport as it was about skill and power. Autodromo has attempted to capture the essence of all this with their Group B watches. 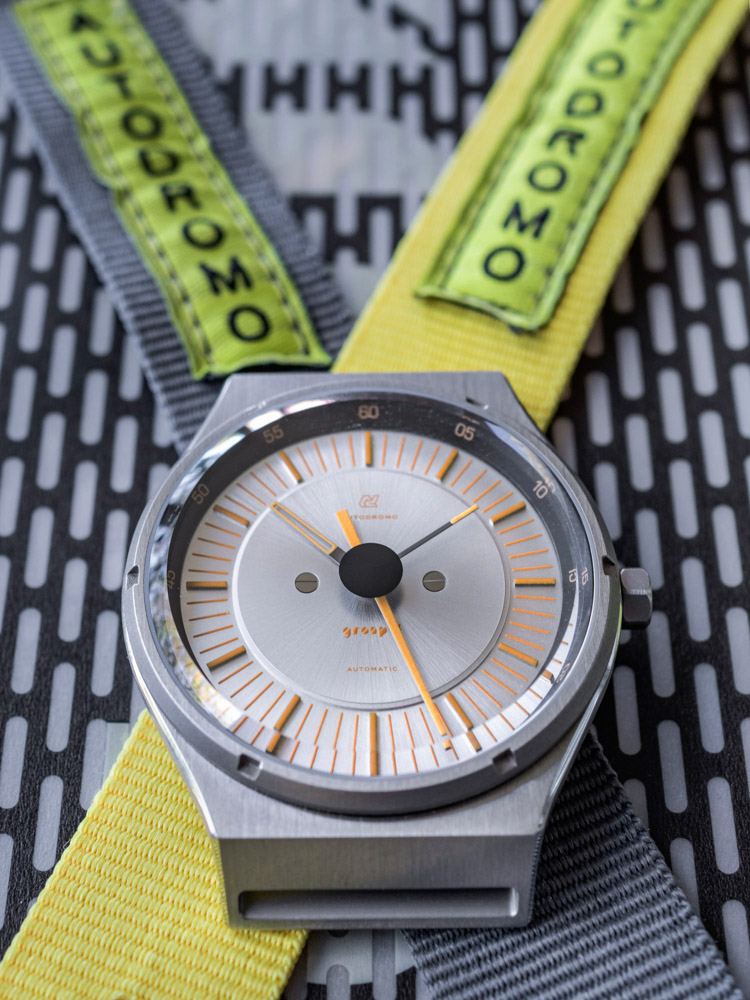 An emphasis on high levels of precision, minutely incremental and diminishing gains, and strict regulations was left to the folks in Formula One, the European Le Mans Series, and Group A rallying. Group B, on the other hand, offered an odd mix of the cutting edge and the brute show of power. This paradoxical relationship makes the fact that the Group B is a time-only and not a chronograph somehow apropos. 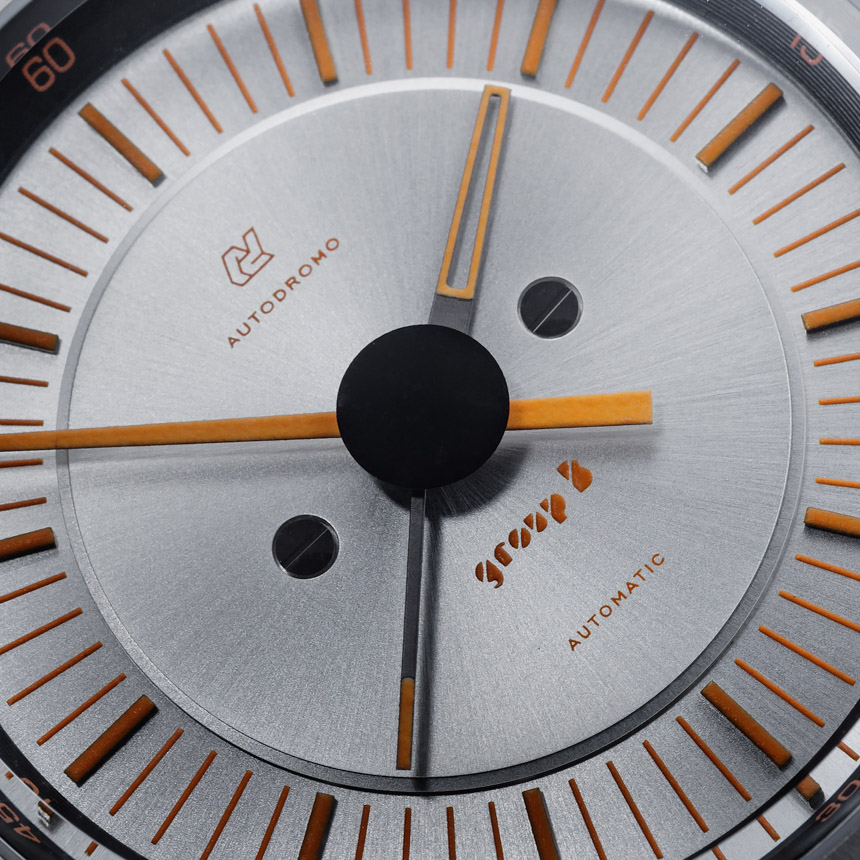 During my time with the watch, I found myself with several questions about design and production choices. Bradley Price, the Creative Director at Autodromo was kind enough to respond to some of my questions. I will provide his comments throughout the article where appropriate and relevant. I found his input useful in understanding certain aspects of the watch – it is inevitable that there is some attrition in the final wearer interpreting a design and what the designer intended to convey. 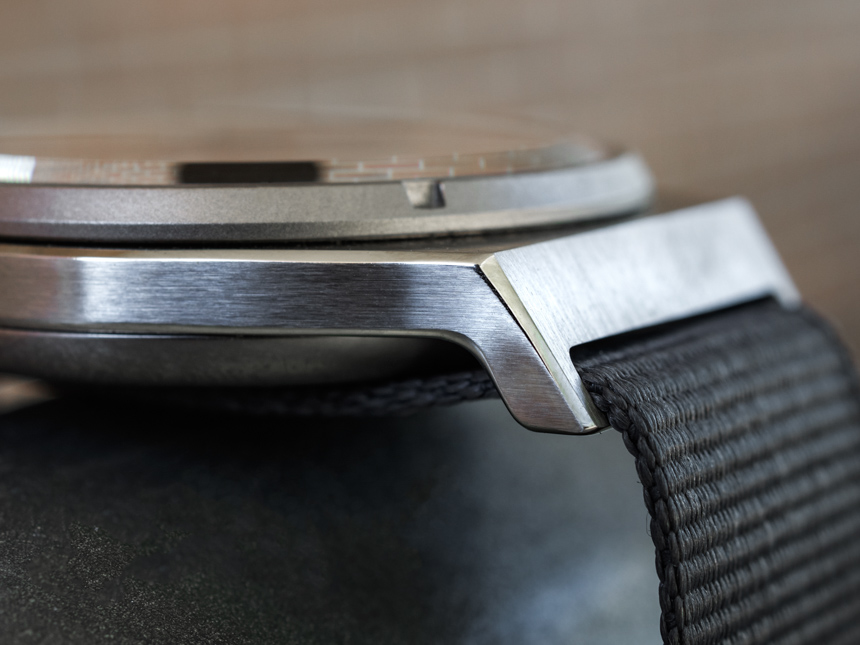 The most distinctive component of the Group B is its case, which makes use of two metals – stainless steel and titanium. The bezel and caseback are titanium with an almost satin bead blast finish and hold the movement, dial, and crystal, while the caseband is brushed steel with polished edges and has fixed lugs and holds the watch secured to the wearer’s wrist. I’ve found the case design to be ingenious because the different textures and appearances of the two metals means that the watch looks far slimmer in appearance than its 9mm. I kept surprising myself every time I glanced down at the side of the watch. Its lightness also helps a great deal with this. 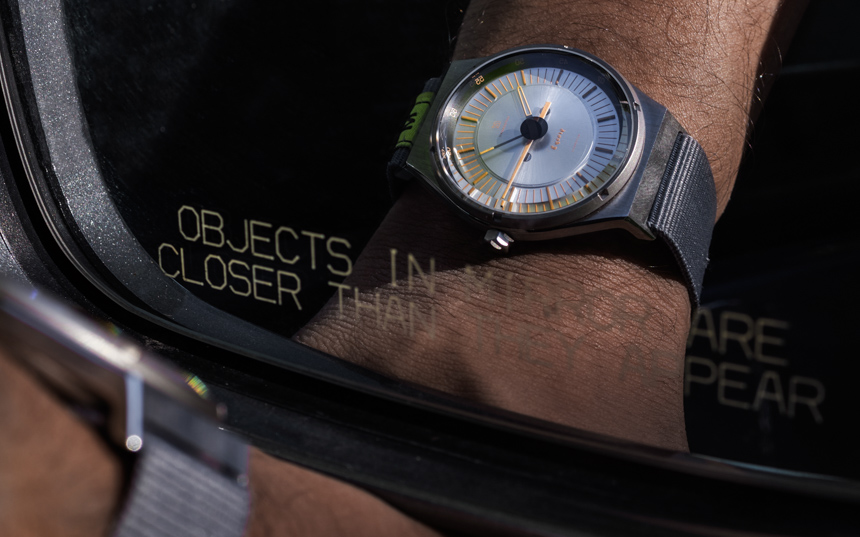 If you’re someone who enjoys their watches with some weight and with a larger case size, then the Autodromo is not the droid watch you are looking for. The case is 39mm in diameter and the use of titanium (even the spacer ring is titanium) means the watch head weighs only 52g. The design of the fixed lugs also means that the watch wears smaller than its 39mm. When compared to a 38mm watch from another popular new brand, the Autodromo actually looked perceptually smaller on my wrist. Personally, I enjoyed the size and lightness. 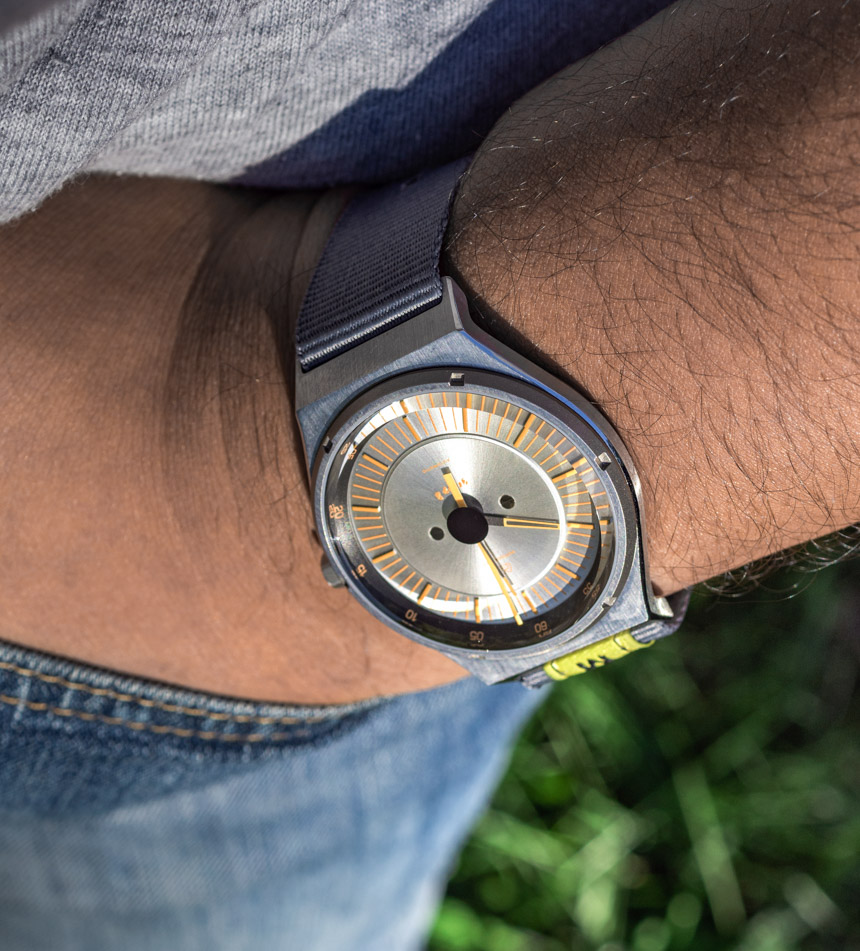 What I am still undecided on is the fixed lugs. When I asked Bradley about the decision to go with fixed lugs, he indicated that this was due to two things. First, a personal desire to make a watch with a single-piece strap and having fixed lugs making this concept ‘whole.’ Next there’s the technical feel and automotive inspiration for the watch; in racing, it is generally a good idea to reduce the number of components in play and increase the rigidity of whatever is present and the fixed lugs echoed that sentiment. While I can appreciate the dedication to the design vision, I suspect the lugs may be a deal breaker for some people. I find myself growing accustomed to it slowly. Besides, this watch is not intended as a daily wearer so a little unusual design isn’t a bad thing. 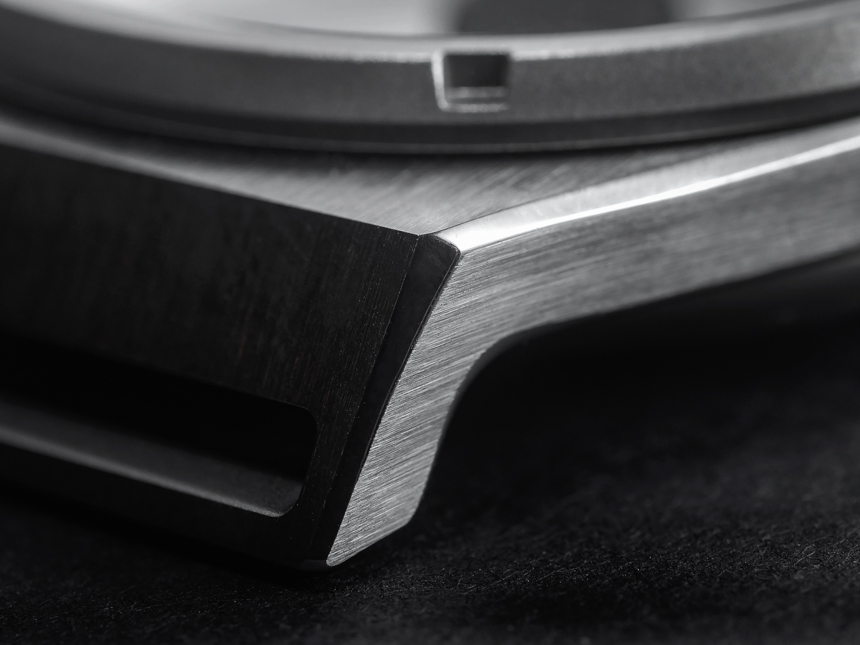 The lugs aside, the case finishing and details are definitely on the better end of the spectrum for a micro brand at this price point. I have a soft spot, odd as it may sound, for the faceted flat crystal. There is something quite tactile about it where I’ve found myself running my finger along the edge absentmindedly a few times. The anti-reflective coating used is effective and does a good job of letting you appreciate that silver sunburst dial. The case is rated to 50m of water resistance which, given the quasi-tool/technical aspect of the watch, is a little disappointing. 100m of water resistance seems fairly standard these days and would give me more peace of mind wearing the Group B under a variety of usage conditions. 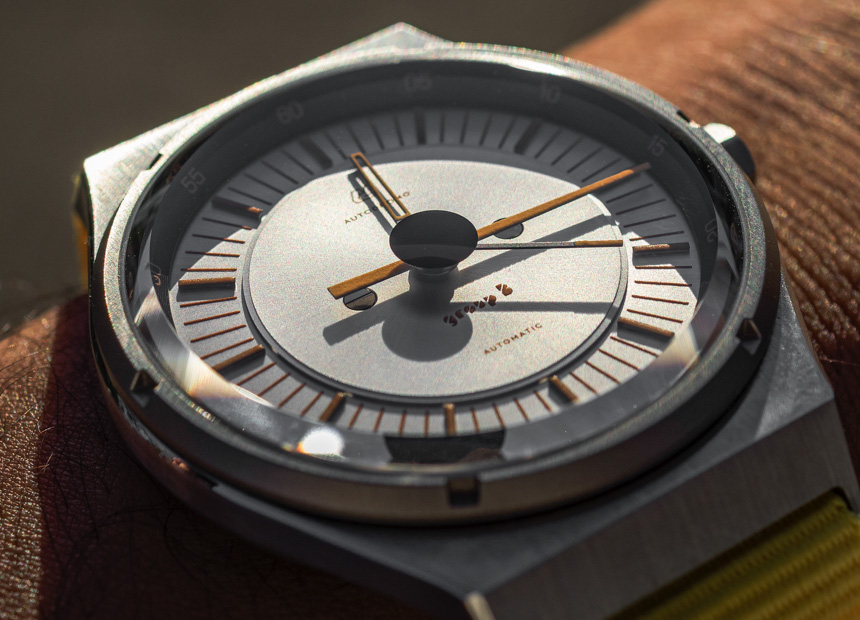 The dial of the Group B Silver/Yellow is superbly finished with a silver sunburst effect. It’s so reflective in fact that as long as you have some faint light source around, you could probably make out the time even though there’s no lume present. The observant reader will notice that the black circle in the middle is not on the dial but is printed on the bottom of the sapphire crystal. This circle along with the two screws on either side is meant to be evocative of a racing car’s gauges. 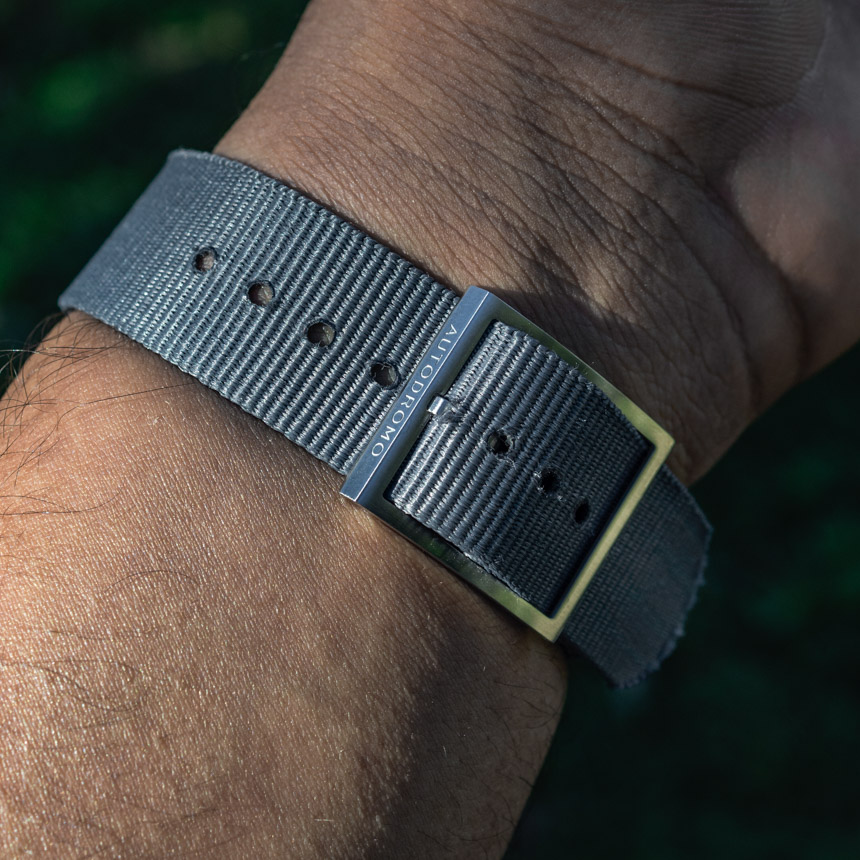 Most of the Group B cars had black gauges with day-glo colors (red, blue, etc) and that black circle over the pinion of the needle. This was the inspiration for the original Group B design and in fact, all the other variants in the line up have a black dial with a day-glo color. The Silver/Yellow is the only one to stray from this with the silver dial. An amusing by-product of this black dot is the shadow it casts on the dial in the presence of bright, direct light from a low angle. I first encountered it on a flight and since then, I keep looking for the right light conditions to replicate it. It’s a fun way to keep yourself busy for a few minutes if you’re ever in some (hopefully, well lit) waiting room. 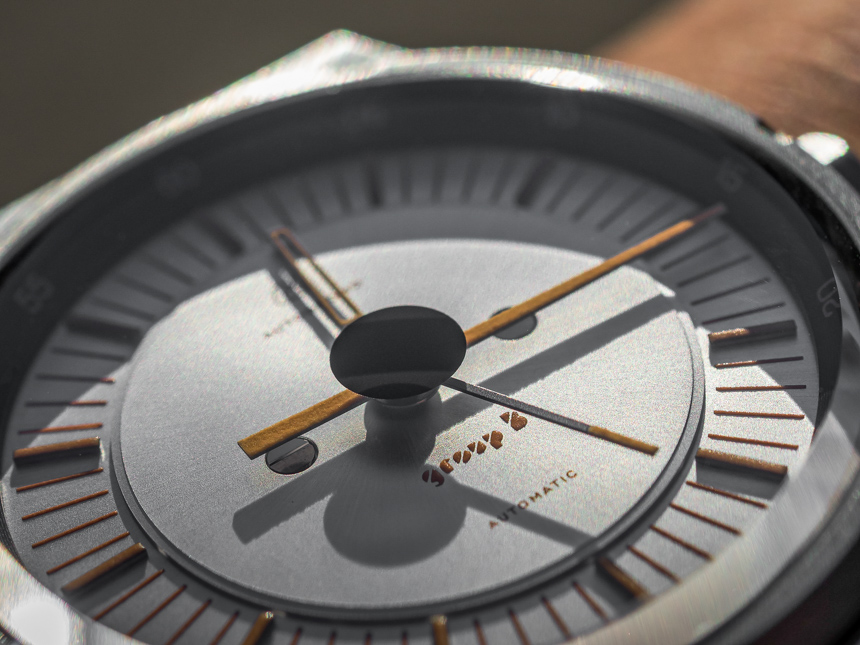 All the hour markers on the dial are applied onto a recessed minute track. I’m not sure what material the markers are made of, but its impressive that they were able to make applied markers work at this price point – especially ones that are so consistent in shape, size, and application. The rehaut is finished with concentric stripes and has a 0-60 gauge – just another one of the many automotive inspired bits of the watch. There is limited text on the dial and it’s in a very small font – I suspect on the black dial earlier variants it would’ve been plenty legible but not so on this silver dial. This is not really an issue in my opinion and experience and I’m just happy they kept the dial text unobtrusive. 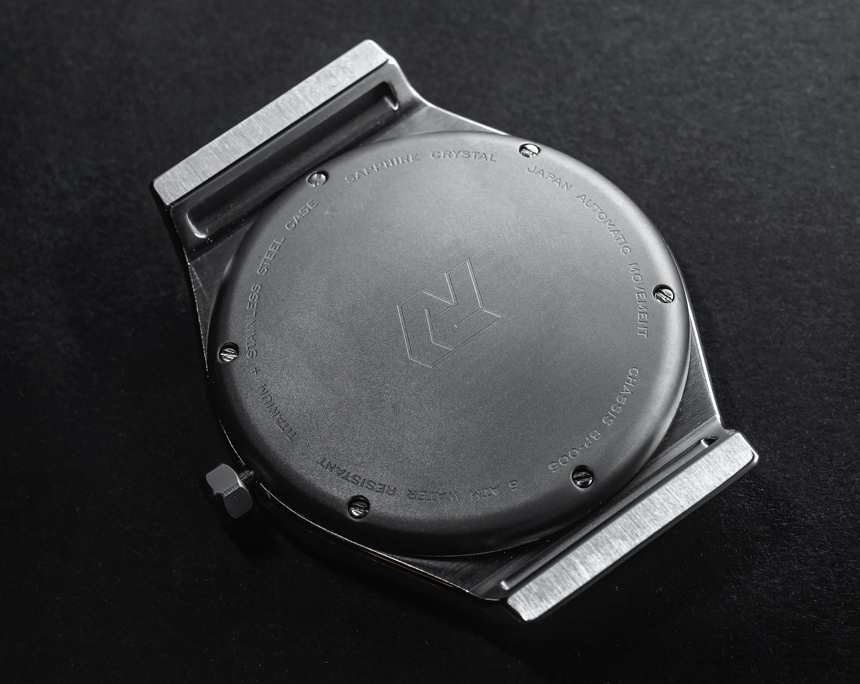 I spent some time earlier discussing how I thought the fixed lugs are likely to be a polarizing aspect for this watch. Well, you can add the hands to this list. This isn’t a very legible watch – I would recommend that you go with one of the black dial options if you like the Group B but value legibility above all else. While the silver/yellow color scheme is enjoyable and a refreshing change from my overwhelming collection of black dials, I often find myself taking longer than I should to read the time on the Group B. 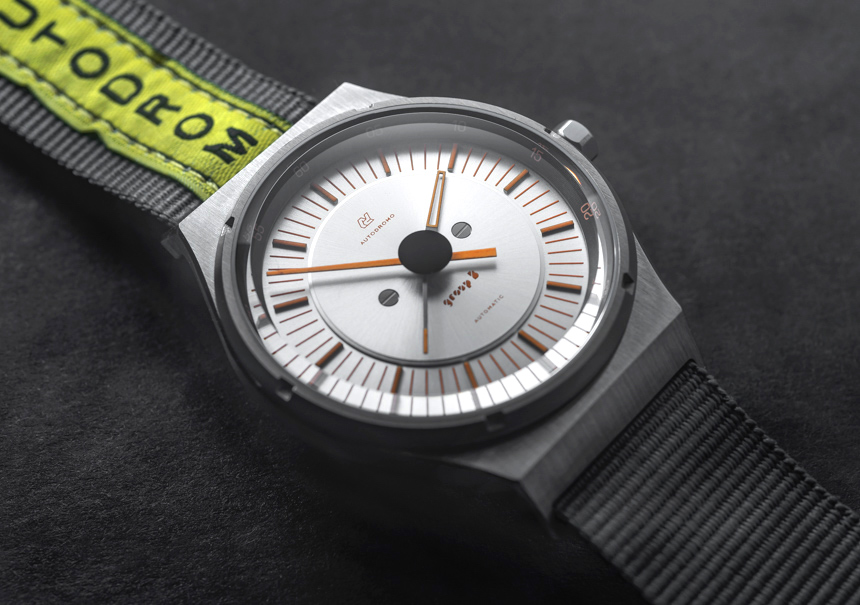 The color scheme is not entirely at fault here, though. I suspect part of this problem stems from the shape and size of the hands. Generally, we’re used to watches where the seconds and minute hands are of approximately similar length and the hour hand is the shortest. Additionally, the hour and minute hands are similar in design unless it is a dive watch (which by necessity, must be different). In the Autodromo Group B, the seconds hand and hour hand are the same length and the minute hand and hour hand have a different design.