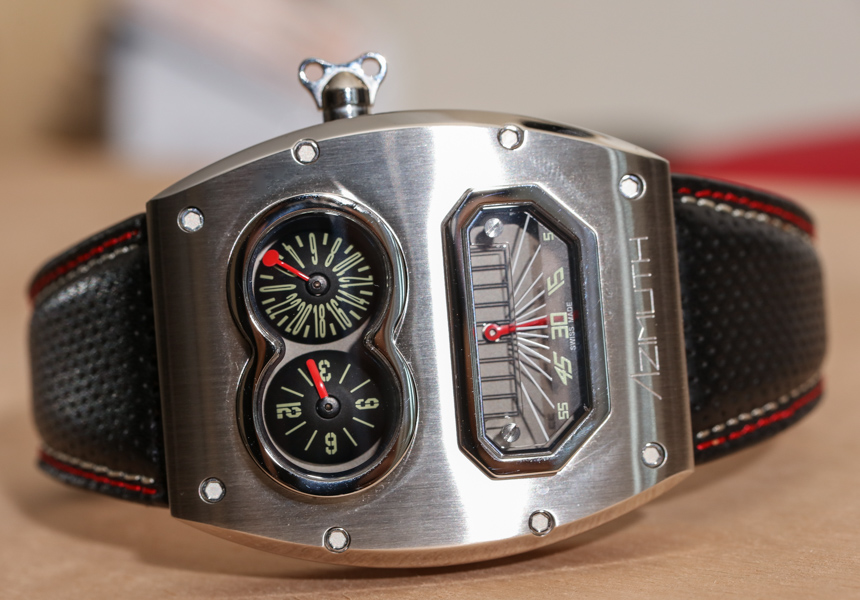 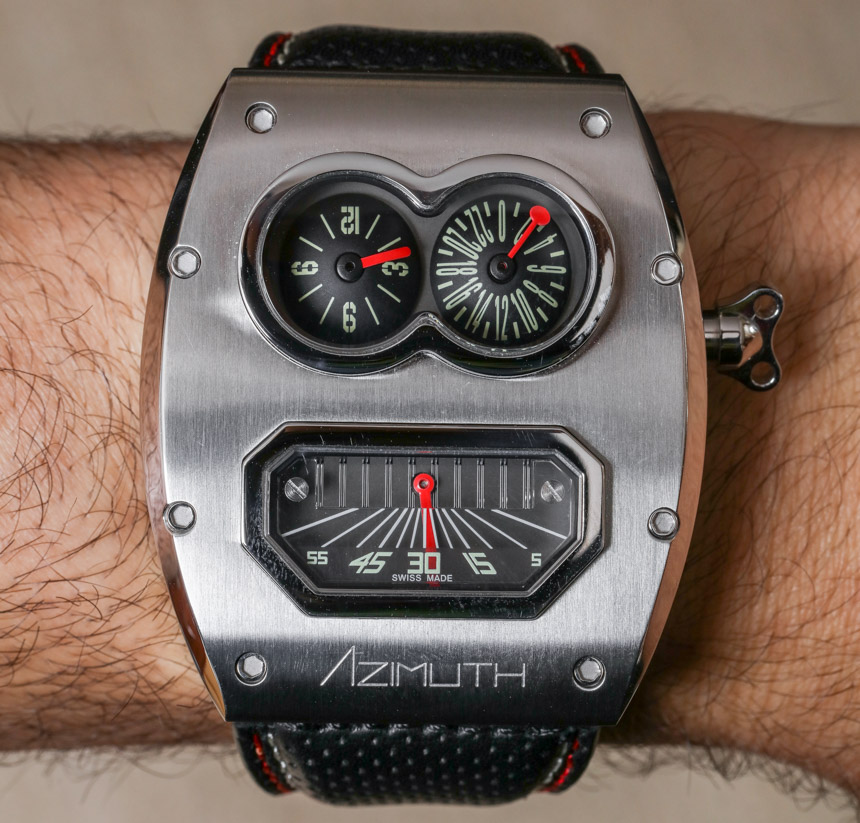 Wearing the Azimuth Mr. Roboto R2 watch allowed me to realize how much I love faces on watch dials. I’m not talking about just a “watch face,” but one with eyes and a mouth. Inspired by 1950s-era metal robot toys, the Azimuth Mr. Roboto R2 watch – rich with quirky personality – smiles at you each time you glance at it. How does this affect the experience of wearing an otherwise cold, hard machine?

The human mind is trained to see faces everywhere. In fact, we see other faces when there isn’t even one there – ranging from patterns in nature to blobs on the wall. It is easy to misinterpret this phenomenon as being more symbolic than it is, which is really just a side effect of natural evolutionary behavior that encourages people to notice when there are other people around – especially from a young age. How this relates to our enjoyment of non-human devices such as a watch can be interesting. 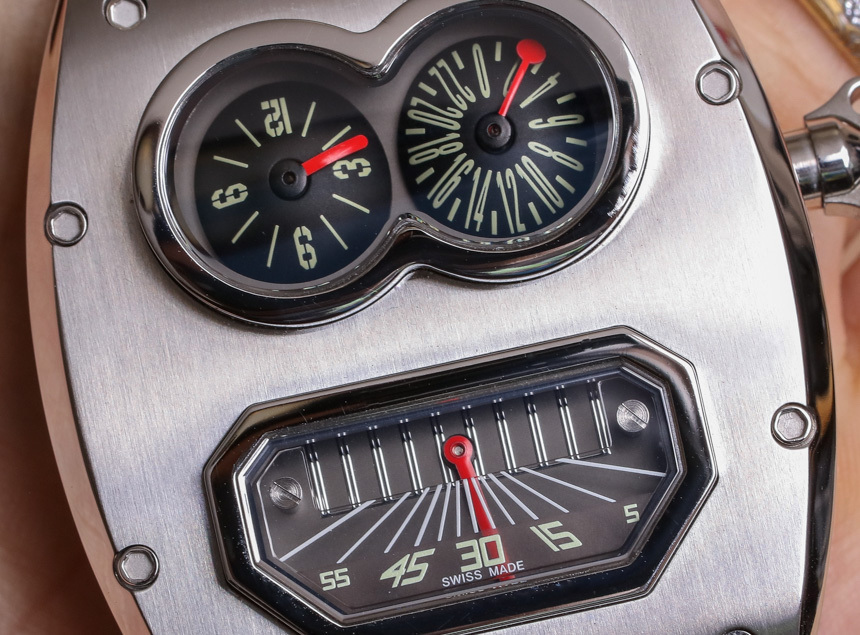 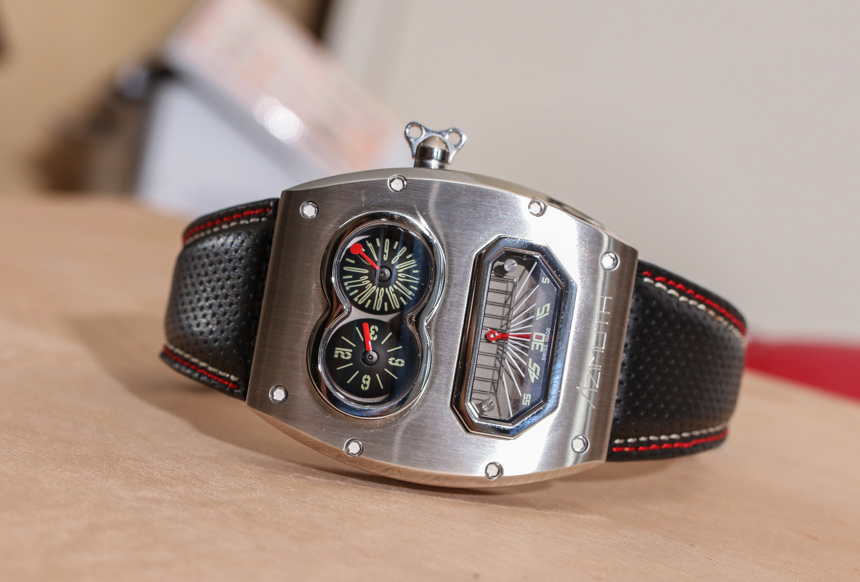 I’m not trying to overthink the appeal of a “face” on a watch dial, but I do think it is important to ask the simple question of why a design such as this brings me so much joy. The entire purpose of the Mr. Roboto R2 is to have a robot-style face on a watch dial – that nevertheless is able to indicate the time. As a timepiece, all effort into the watch is designed to fulfill this purpose. Especially at this price point, arguably no one does it better than Azimuth. 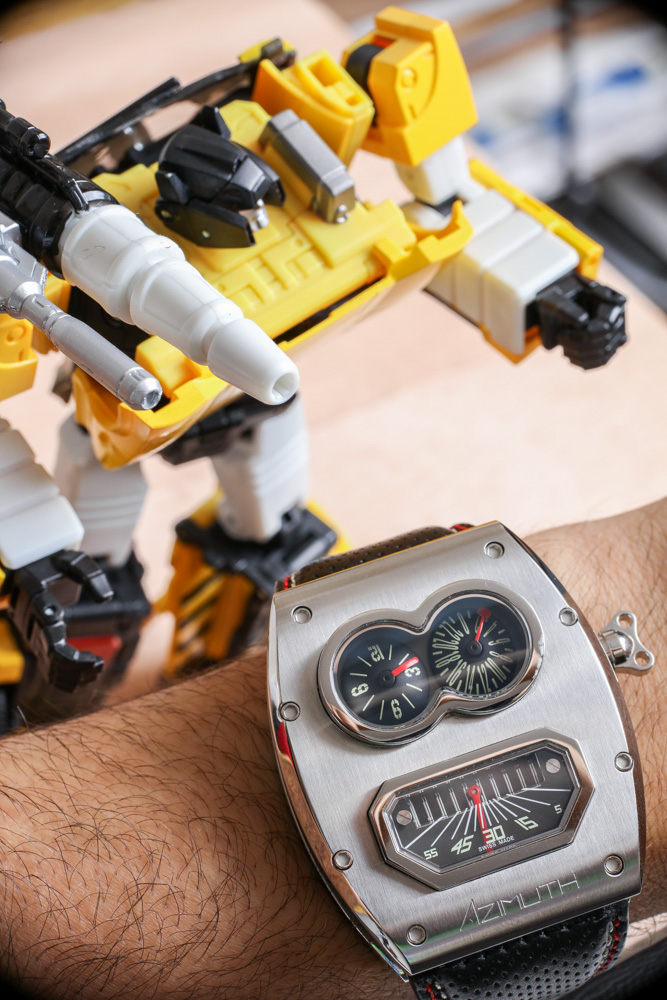 In my opinion, Azimuth often doesn’t get the credit it deserves for many of the more interesting “avant garde” watches it releases such as the Mr. Roboto collection. Timepieces such as this are entirely about fun and personality. In a sense, the Mr. Roboto is the anti-tool watch. It isn’t about specific functionality or durability, but rather being fun, and also still being a watch. The Mr. Roboto R2 (as the name implies) is actually the second Mr. Roboto watch produced by the brand, with watches such as these being among the more rare models that are produced today. 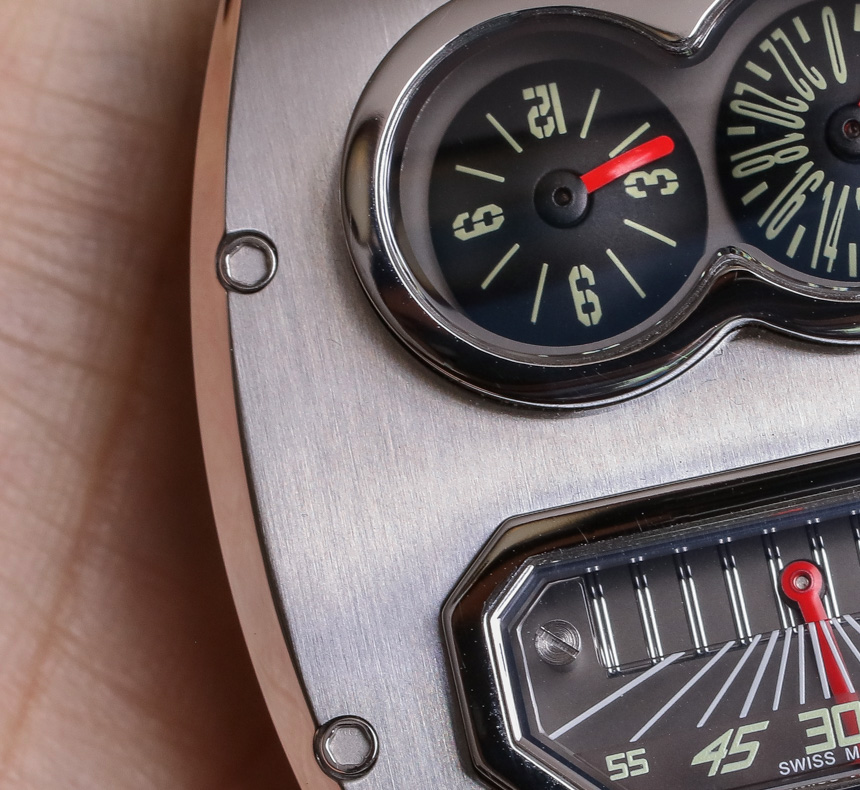 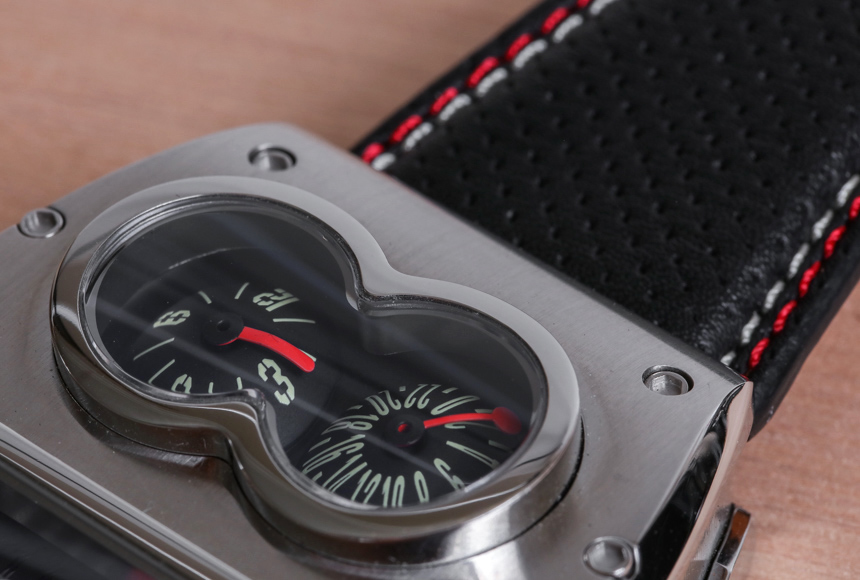 Compared to the original Mr. Roboto watch, the R2 is in many ways an upgrade. The watches share similar tonneau-shaped cases and movements, but differ in the design of the dial, which in my opinion, is much more eye-pleasing on the R2. One of the major upgrades is the half-dome “eyes” which are used to indicate the hours as well as the second time zone. Very MB&F-esque (I am referring to the HM3 Frog of course), the domes have curved hands which move over them. Indicating the minutes is the purpose of the “mouth,” which uses a retrograde hand. The design reminds me of analog car radios and I’m sure the resemblance is anything but coincidental. 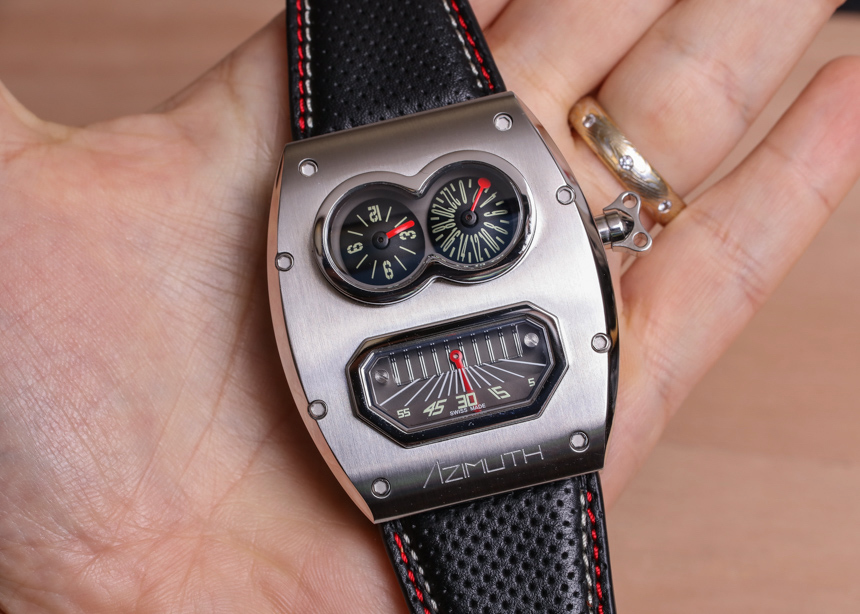 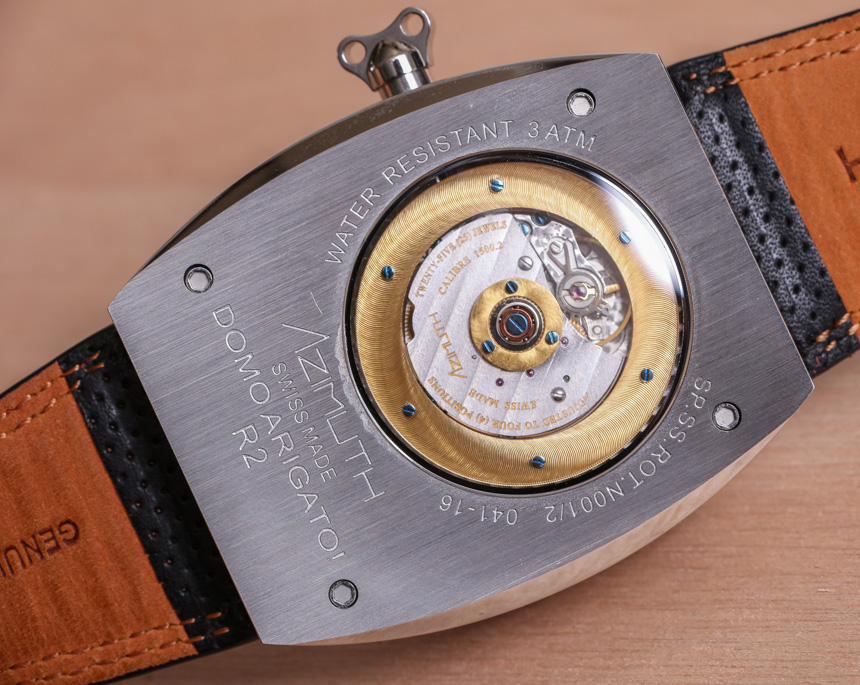 In the luxury watch world, most watches with such exotic dial layouts come with very high prices. The Mr. Roboto R2 isn’t what I could call a budget watch, but it does fall in line with part of Azimuth’s overall goal to offer cool/quirky watches like this for Omega versus Patek Philippe prices. Part of making the R2 and watches like it relatively affordable is how the movements are made. Rather than produce entirely new calibers, Azimuth prefers to take the wise approach of modifying base Swiss ETA automatic movements. 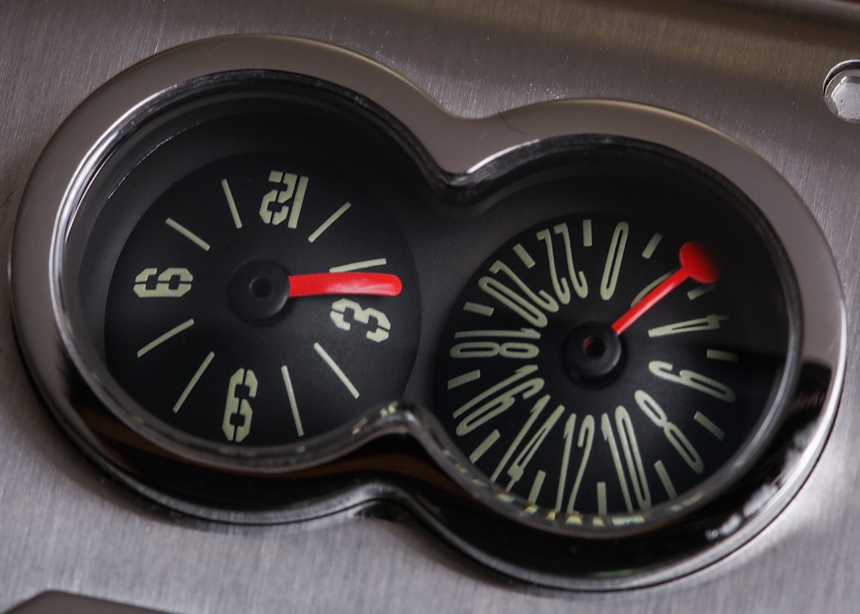 Azimuth really begs the question of why similar style watches from fan-favorite brands like MB&F and Urwerk are so expensive. We aren’t talking three to four times as expensive, but like 20 or more times as expensive. Yes, those other watches are better examples of fine watchmaking and haute horology but clearly, not everyone can afford them. I’d like to think that Azimuth products are a happy medium for those seeking something interesting and fun, but who can’t imagine spending over $10,000 for the privilege. 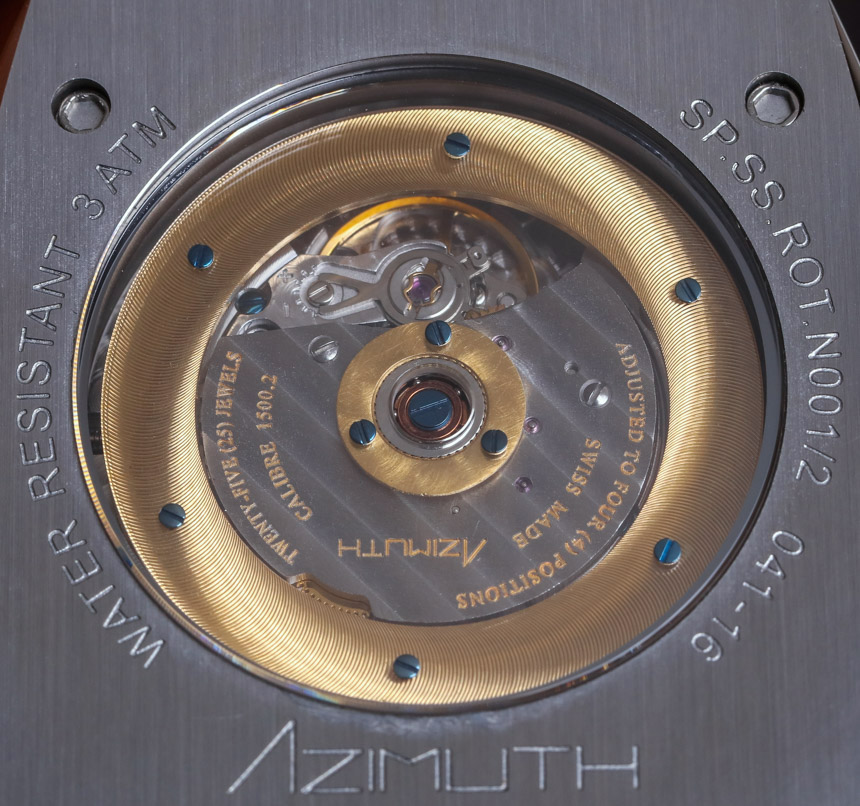 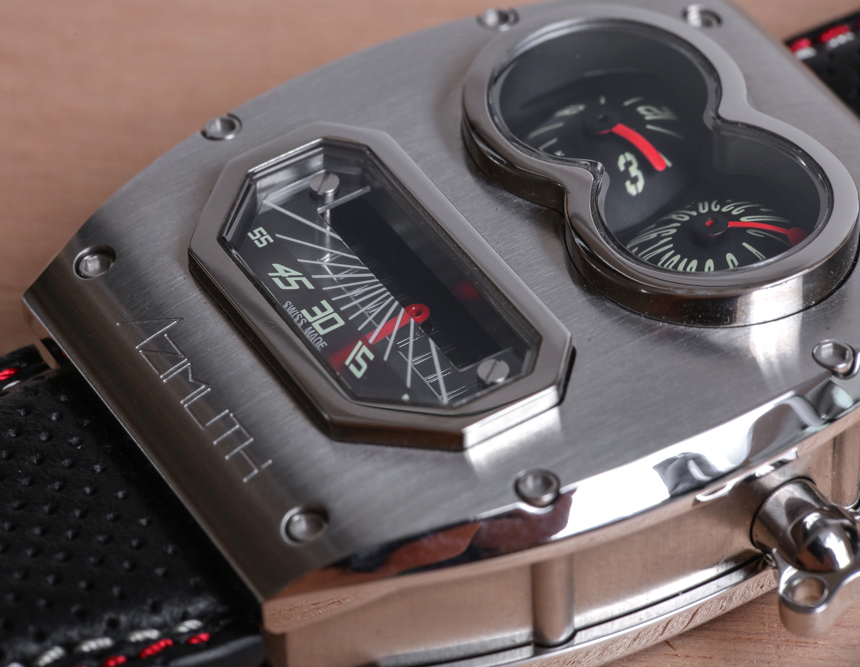 Azimuth calls the movement inside of the Mr. Roboto R2 the caliber 1500.2 automatic. The most obvious modification to the movement is how the time is indicated. Two long stems are positioned for the hours in 12 and 24 hour format “eyes,” as well as the retrograde minute indicator “mouth.” I found that the movement works rather well given that the system is in some ways delicate. The right eye, which is the GMT indicator, is actually better used (in my opinion) as an AM/PM indicator. This is easy to do just by setting the 12 and 24 hour time to the same time. 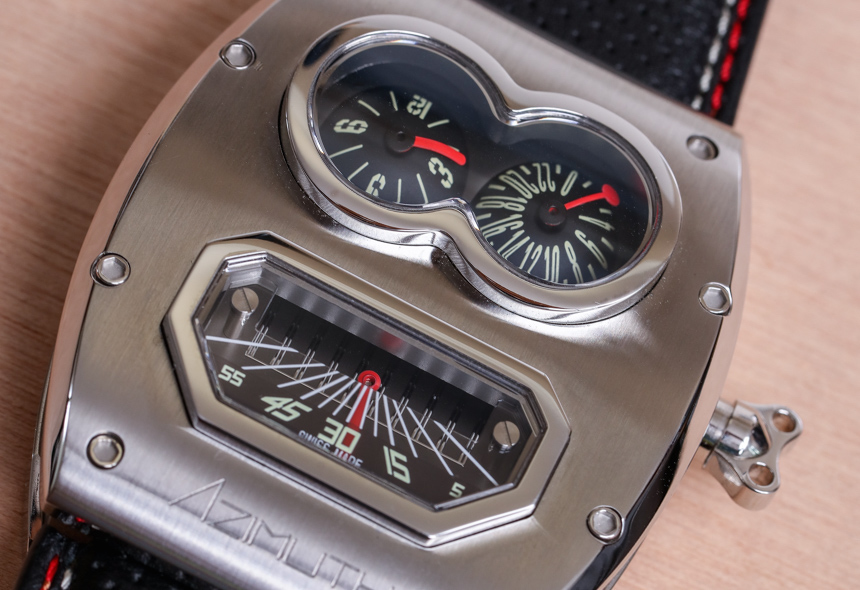 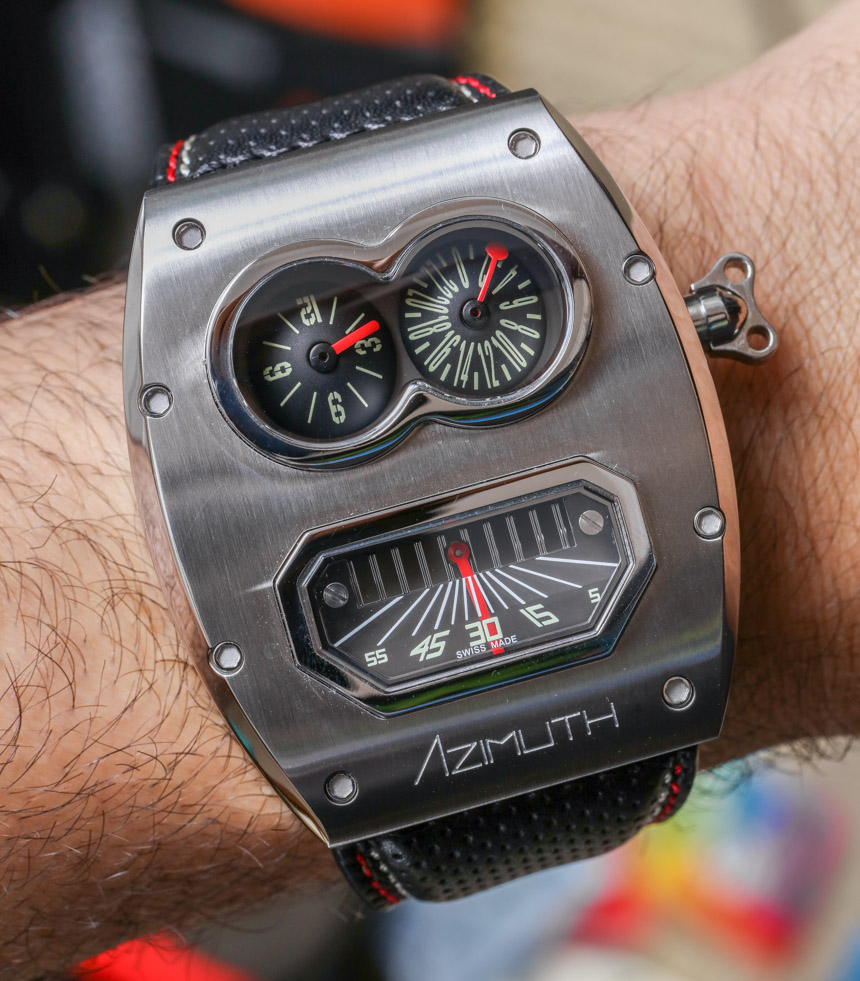 You may not believe me, but the reality is that I didn’t find legibility to be an issue. I found that after a day or so to adjust, I noticed that I located the orange/red hour hand and the minute hand with relative ease. That actually surprised me because my experience with “interesting” ways of telling the time usually has me longing for a pair of traditionally center-set hour and minute hands on a round dial. In this situation, I actually found the R2 watch to be just as easy to read as most other watches – and certainly more so than the original Mr. Roboto model. 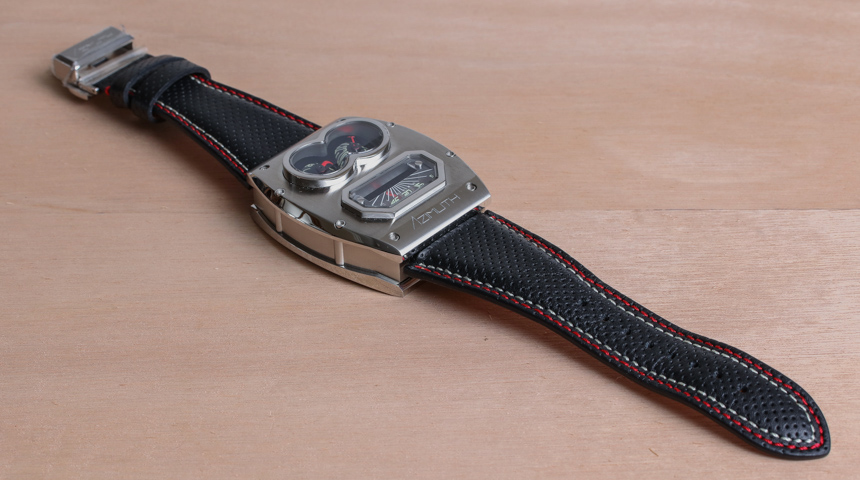 With that said, no one I showed the watch to was able to easily understand how to tell the time – literally no one. I’ve never had such a popular watch on my wrist that no one knew how to read. I’m not saying that Azimuth set out to confuse lay people, but I found it intellectually interesting that no one in my circle of friends and family (i.e. not watch people) could understand how to make sense of the dial without prior explanation. Do other people out there who wear watches with “non-standard” means of indicating the time have similar experiences with onlookers?