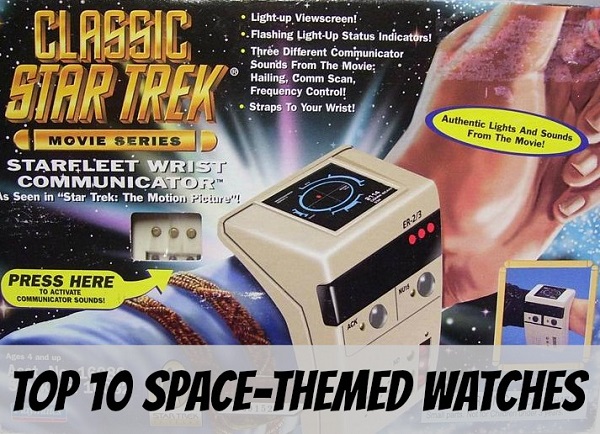 Be it space or spaceship, the watches below are some of the coolest modern watches which honor or make actual use of elements far from the Earth. Imaginative watchmakers use meteorite dials or design their cases and movements to look like spaceships. We love this stuff and as traditional as watchmaking is, these timepieces are directly inspired by science and science fiction. Oh, and we aren’t including watches that track the motion of planets or the sky. Those are typically more related to calendar watches, and should be part of a distinct list. 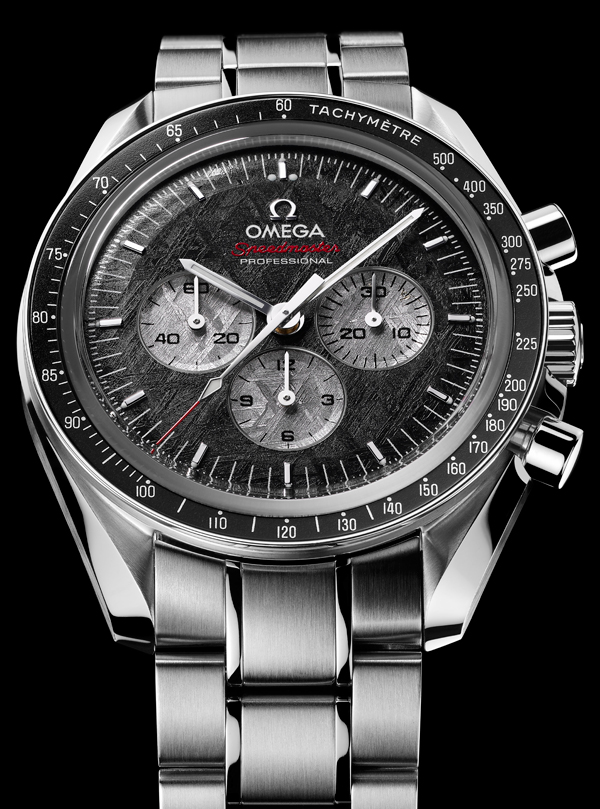 As a limited edition of 1,975 pieces, Omega produced the limited edition Omega Speedmaster Professional Apollo-Soyuz version of the Moonwatch in 2010. Celebrating the US + USSR space mission in the mid 1970s, this beautiful version of the Omega Speedmaster Professional has a meteorite face and subdials. Meteorite, of course, comes from space and is further extremely beautiful on watches. We previously covered this watch here. omegawatches.com 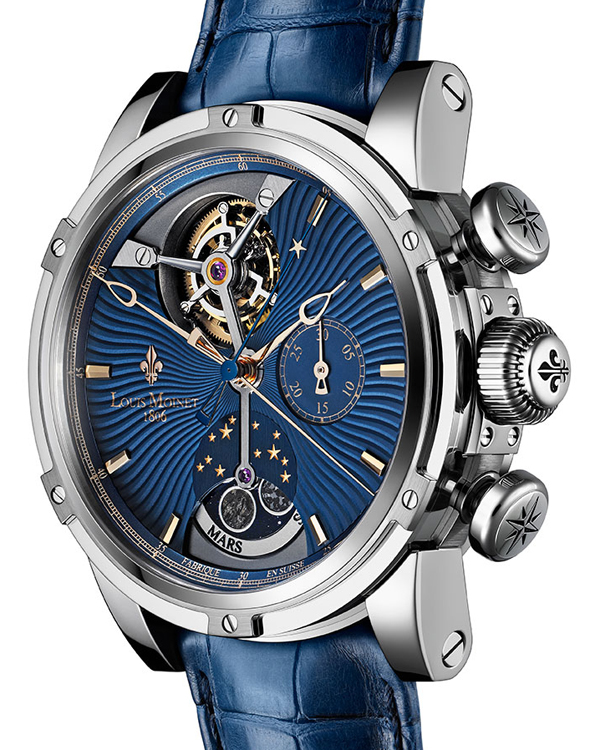 Continuing in their theme of using rare natural materials, the Louis Moinet Astralis limited edition watch combines a tourbillon, chronograph, and 24 hour disc that has stones from four places in the solar system. Here lie rocks from the Moon, from Mars, from Mercury, and from an asteroid that formed near the Sun. Nothing else like it exists, and these watches were very limited in their production. Read more on aBlogtoWatch here. louismoinet.com 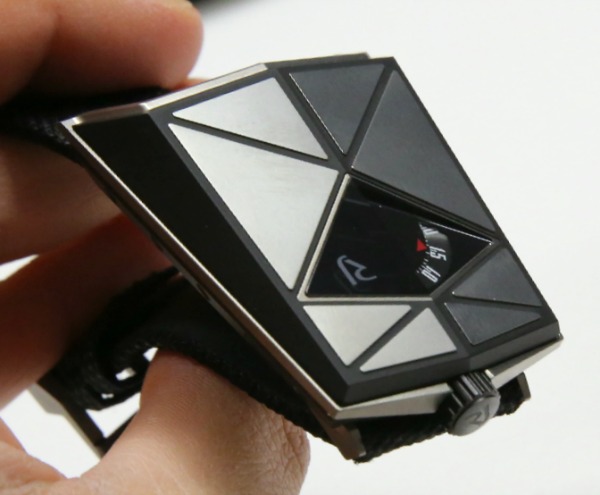 No stranger to space-themed timepieces, Romain Jerome released the Spacecraft in 2013 as miniature spaceship in wrist watch form. Designed as a driver’s style watch, it has a retrograde jumping hours display which is displayed on the side of the watch and a disc to indicate the minutes on the top of the case. Produced in titanium and PVD black steel, Romain Jerome only produced 99 pieces. Read more on aBlogtoWatch here. romainjerome.ch 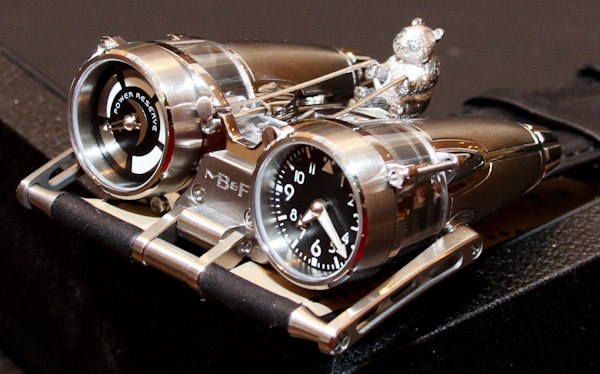 The limited production MB&F Horological Machine No. 4 was nicknamed the Thunderbolt and combined the brand’s love for aircraft and spacecraft. The titanium case was designed to look like two engine hulls, while the movement inside bared a striking resembled to ships from both the Star Wars and Star Trek universe. Read more on aBlogtoWatch here. mbandf.com 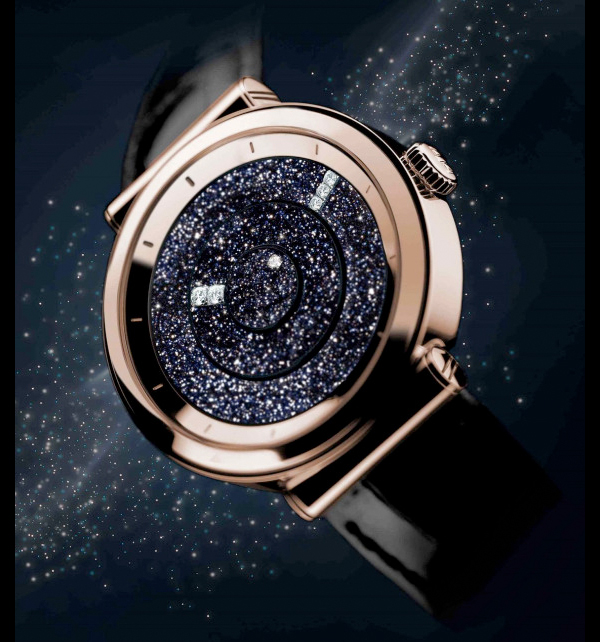 It should be obvious why this Blu watch is called the “Galaxy.” The timepiece’s dial consists of three concentric discs used for the hour, minute, and seconds hands. The indicators are diamonds placed on the discs. Produced from Aventurine, the deep blue discs have small tightly packed sparkles that give the Blu Galaxy’s dial the look of our starry sky at night. Read more on aBlogtoWatch here. blu.ch 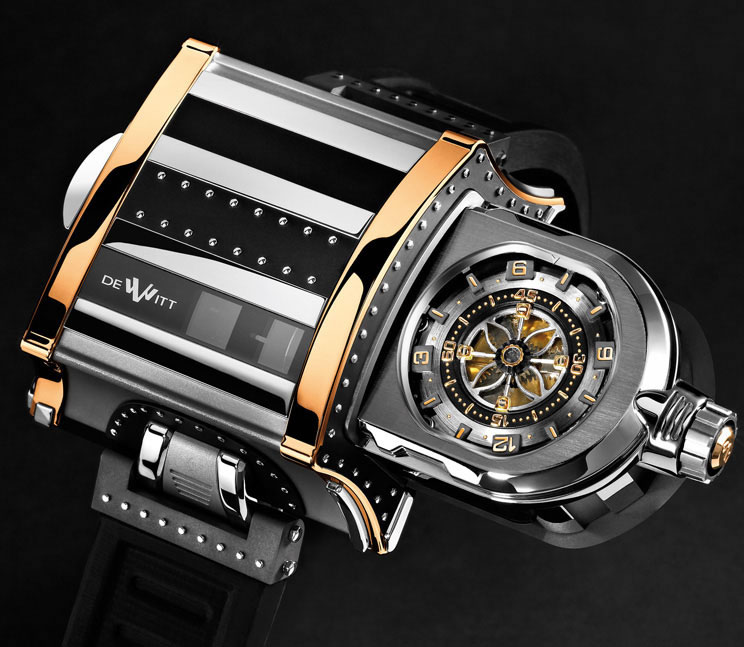 A steampunk spaceship for the wrist, the famously wild WX-1 by DeWitt has a pull-out case which allows one to further examine the complex movement and many barrels that offer a 21 day power reserve. The watch also has a side-mounted tourbillon and manages to tell the time on a compass style display. Only 33 WX-1 watches were ever produced. Read more on aBlogtoWatch here. dewitt.ch 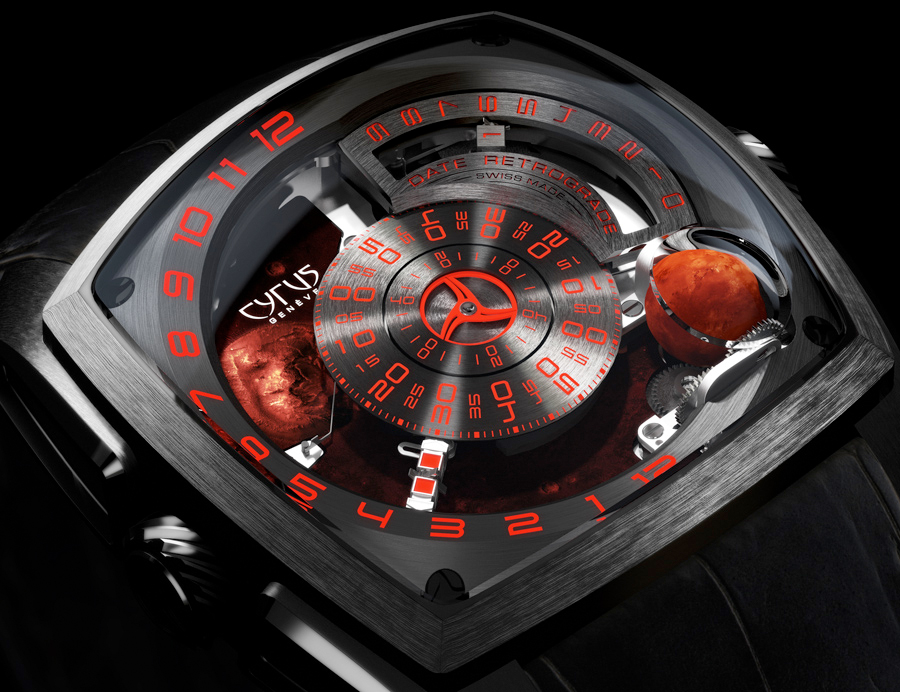 As a special limited edition version of the already interesting Klepcys, Cyrus also released the Klepcys Mars as a nod to the red planet. The normal Klepcys has an orb on the dial which serves as a moonphase indicator. The Mars version does the same, but for the day and night cycle of Mars (which is a bit longer than that of Earth). We covered this watch more here. cyrus-watches.ch 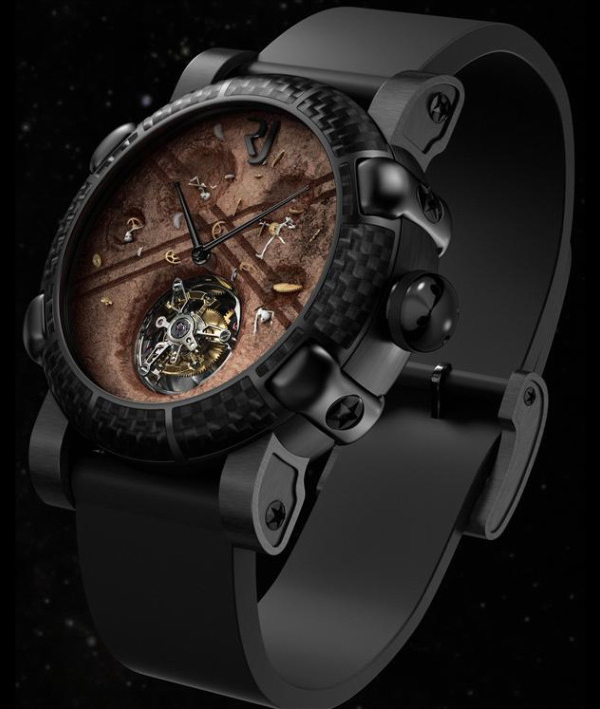 In 2009 Romain Jerome topped its Moon Dust DNA collection with a strange piece called “The Truth About Roswell” Tourbillon. The dial contained an open view of the tourbillon, as well as a cratered moon surface with tiny alien skeletons and watch gears buried in the surface while moon rover tracks created a signature “X” on the dial. It may not make a ton of sense, but it was a fantastically weird watch. Read more on aBlogtoWatch here. romainjerome.ch

There have been many versions of the now iconic DB28 from De Bethune – each science fiction inspired and with a clear Star Trek Starfleet Command logo style shape on the movement, and here on the dial as well. This beautiful version is the DB28T Black in black colored titanium with a tourbillon and amazing futuristic design that retains the passion of traditional watch making. debethune.ch 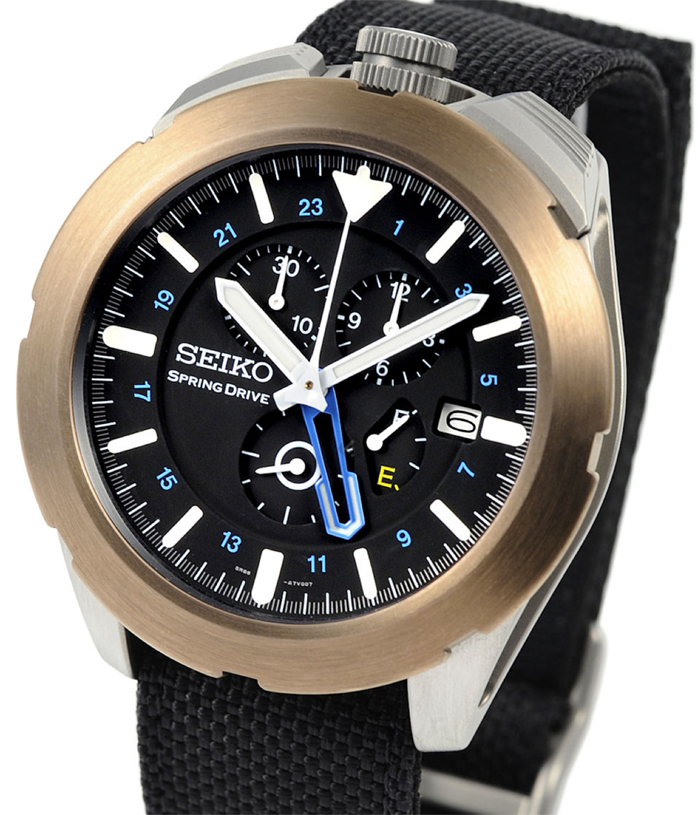 The Spacewalk by Seiko has an interesting history that involved being co-developed with video game designer Richard Garriot (who eventually produced a space-themed MMO), as well as being taken into space with him. Seiko designed it as their most capable space-worthy timepiece ever, and it includes their sophisticated high-end Spring Drive movement and is rather large at 53mm wide. A few limited edition versions were released at a price of around $28,000 and it is among the few timepieces around that we would truly feel comfortable taking into outer space with us. Read more on aBlogtoWatch here. seikospringdrive.com 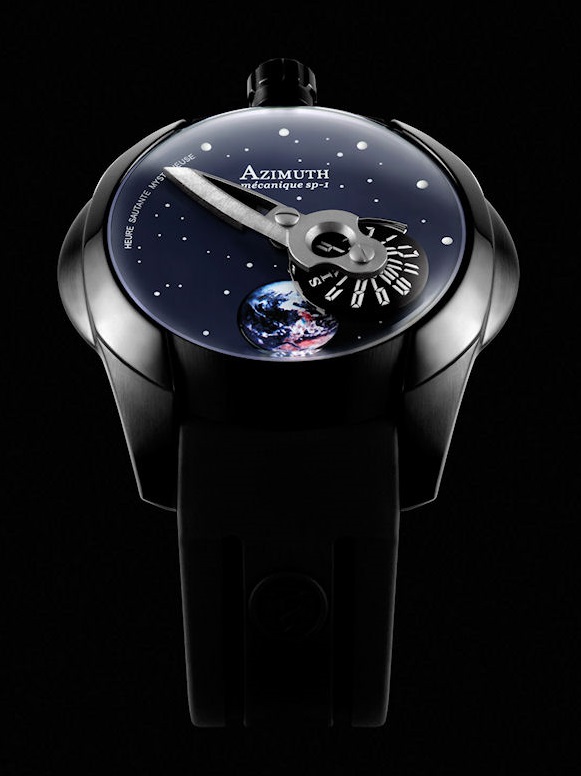 With a dial meant to appear like the stars and a view of Earth, the Azimuth SP-1 Spaceship has a unique combined hour and minute display that looks like a rocketship. The large structure serves as a minute hand around the periphery of the main dial, while a turning disk for the hours sits at the opposite end. azimuthwatch.com

For more watches worn by astronauts, watches with materials from Outer Space, watches that look like spaceships and watches that are just plain space-y, check out our collection and keep up with them, as we add them here: Space-Themed Watches