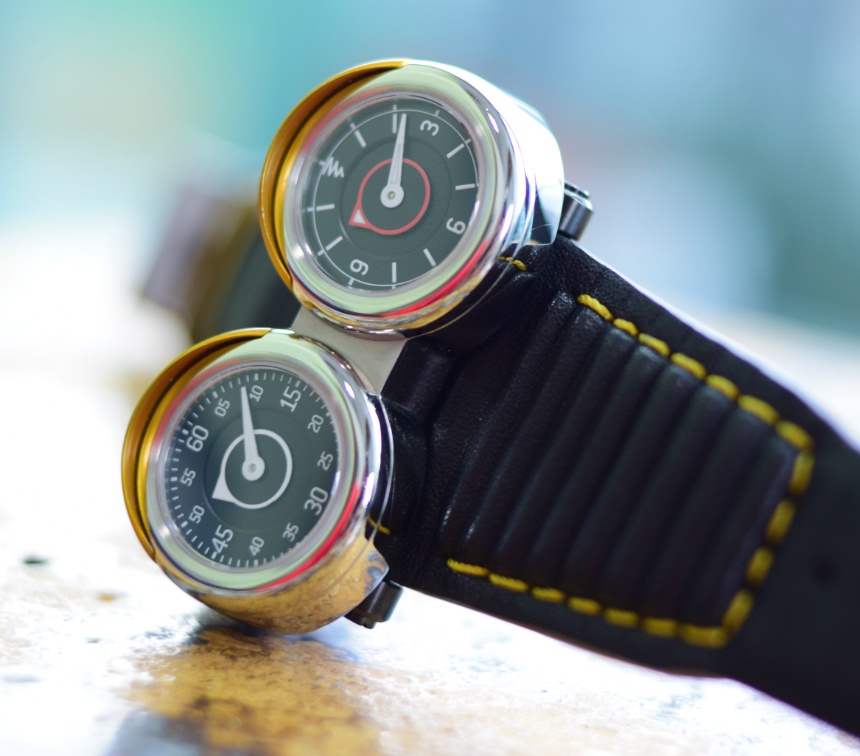 Azimuth is a Swiss-based independent brand that is renowned for using base movements to create very interesting and avant-garde watches. To get a sense of what I’m talking about, check out their SP-1 Landship watch or their more recent King Casino watch. Despite their unusual designs, they are actually powered by heavily modified base ETA movements. It’s quite a remarkable feat, and continuing in that tradition, the brand has just announced their new Azimuth Twin Turbo watch that we think will be a hit among petrolheads. 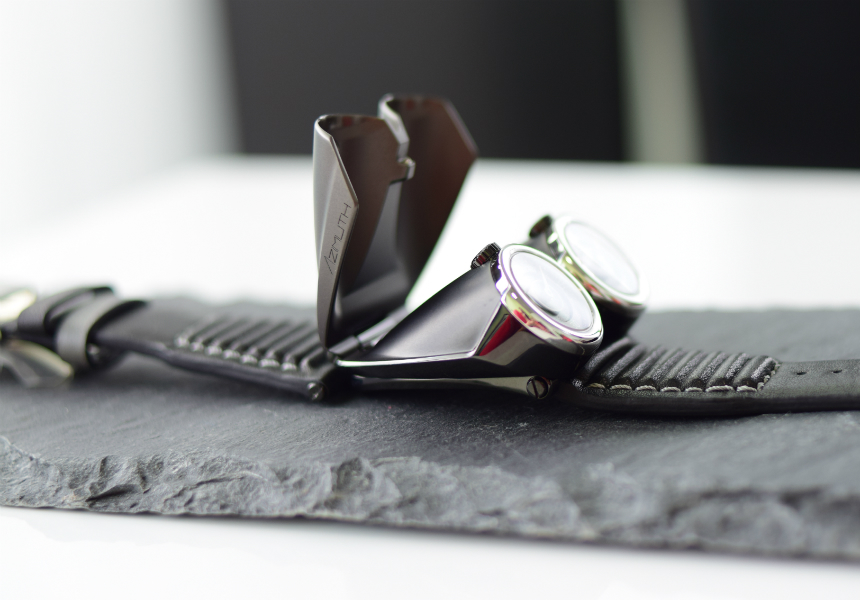 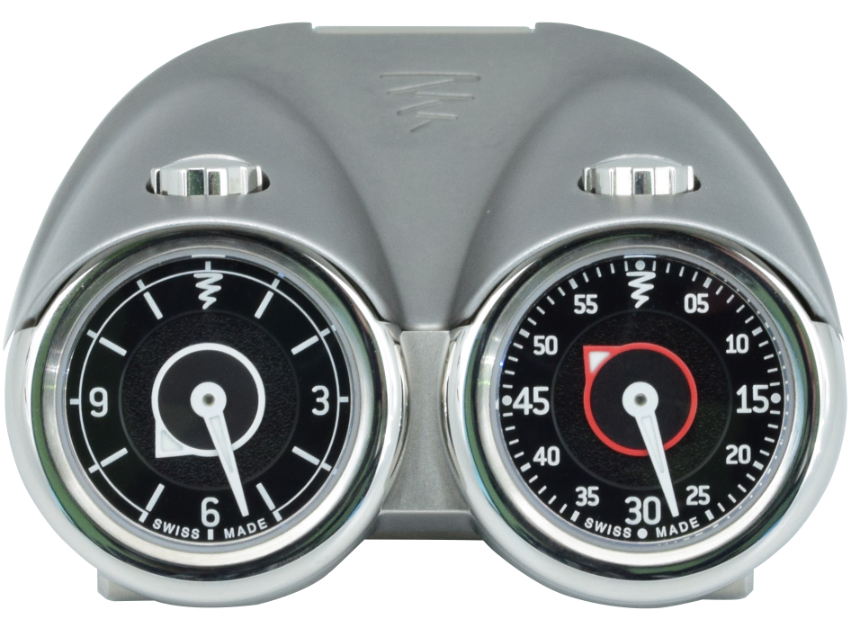 The Sixties is often regarded as the golden age of car design. Modern automotive icons like the Ferrari 250 GTO and Jaguar E-Type were designed during that time. Cars of that era were designed without the aid of computers, so their designs were guided by form more than function. This also explains their unique, characteristic feel and look. These charming machines are unlike many of today’s cars where outright performance and efficiency is the goal, and therefore designed with the heavy use of computational aids to maximize downforce and reduce drag.

In any case, the Azimuth Twin Turbo’s design is heavily influenced by cars of that era. In fact, the entire watch is a mishmash of automotive references. The case, for example, resembles the engine block, whereas the cover is obviously a nod to cars’ bonnets. And then, the twin dials themselves are clearly modeled after the instrument clusters found in vintage race cars. 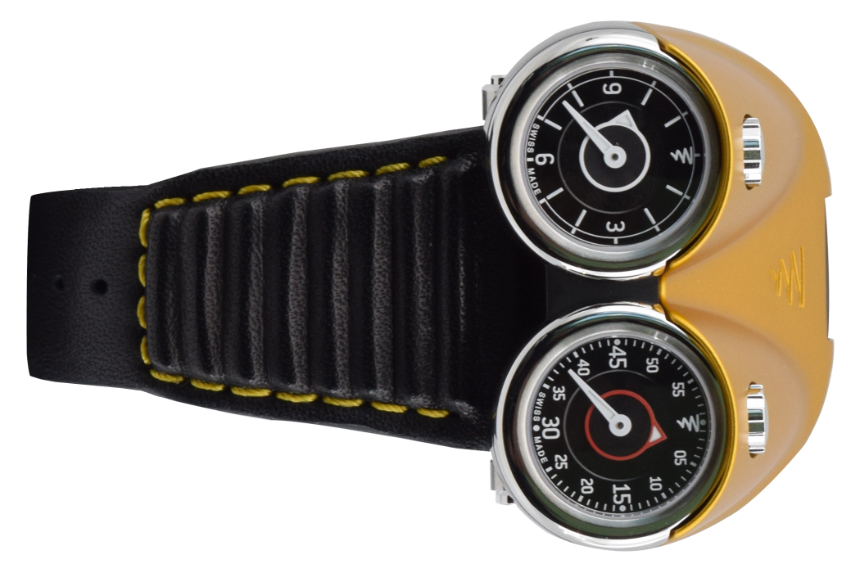 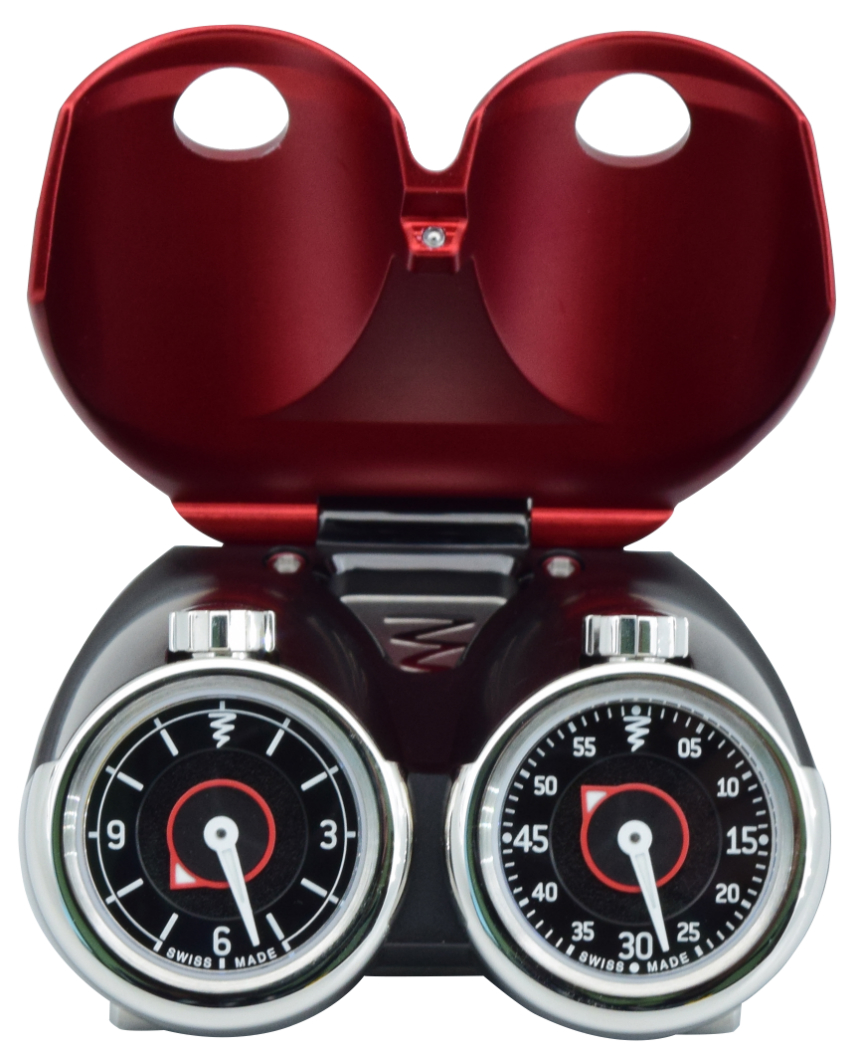 The case is crafted out of stainless steel and measures 54mm by 50mm, so it is fairly large. It also features a mixture of polished and matte-finished parts. The matte-finished parts are concealed by the “bonnet” which is made out of anodized aluminum, and they are only revealed when the wearer lifts the “bonnet” to access the twin crowns of the watch. The Azimuth Twin Turbo will be available in a number of different colored covers: yellow, anthracite, silver, and red. 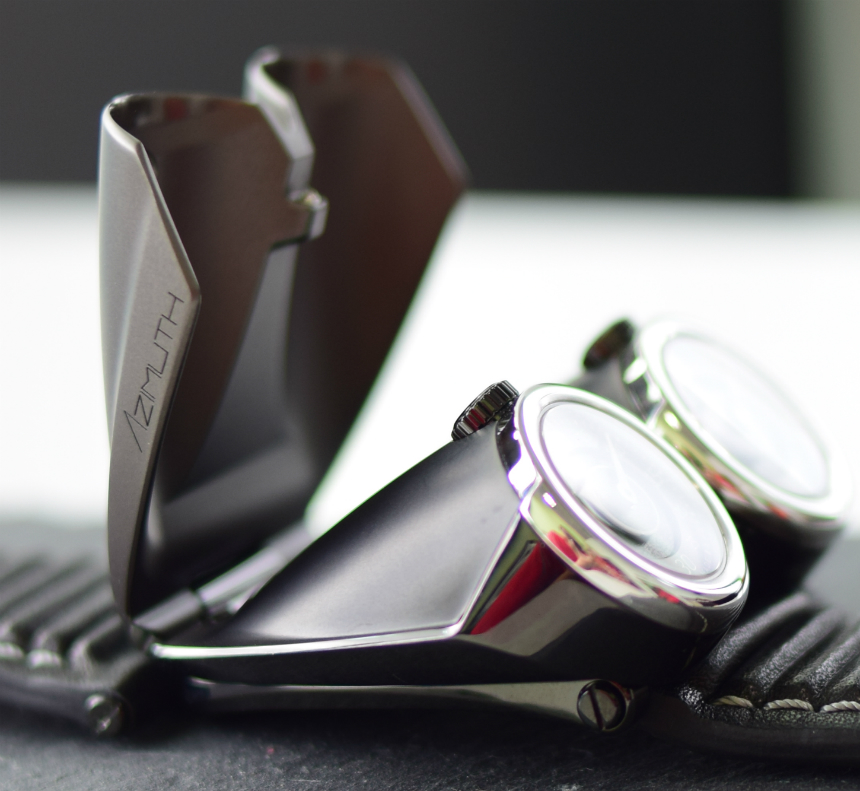 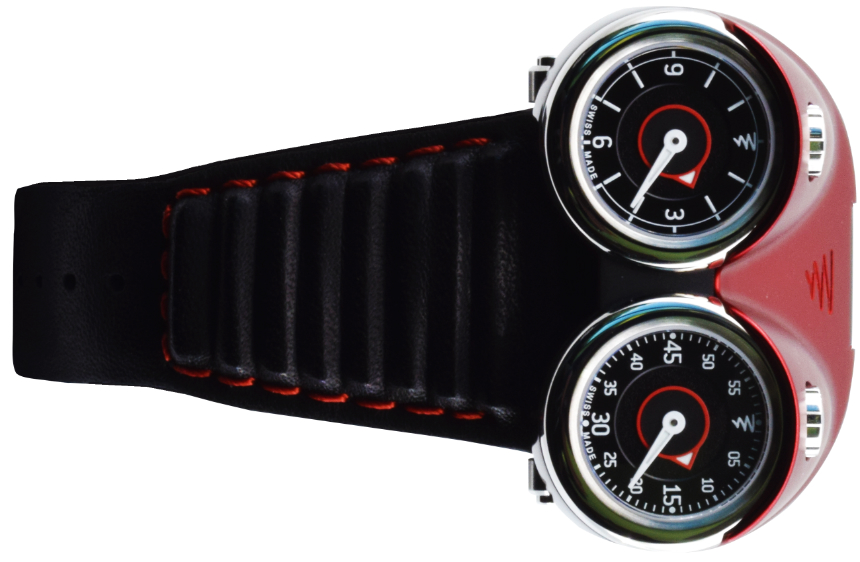 The twin crowns allow wearers to wind the watch, which further reinforces the motoring inspiration, as really old automobiles needed to be hand cranked in order for their motors to start. Behind each of the twin dials beats a vintage ETA caliber 2512-2, a small hand-wound movement that was often used in ladies watch in the Sixties. And since each dial is independently powered, it also means that wearers can set the Azimuth Twin Turbo to display the time in two timezones, if they wish, which is a really practical feature for frequent travelers or professionals who work across timezones. 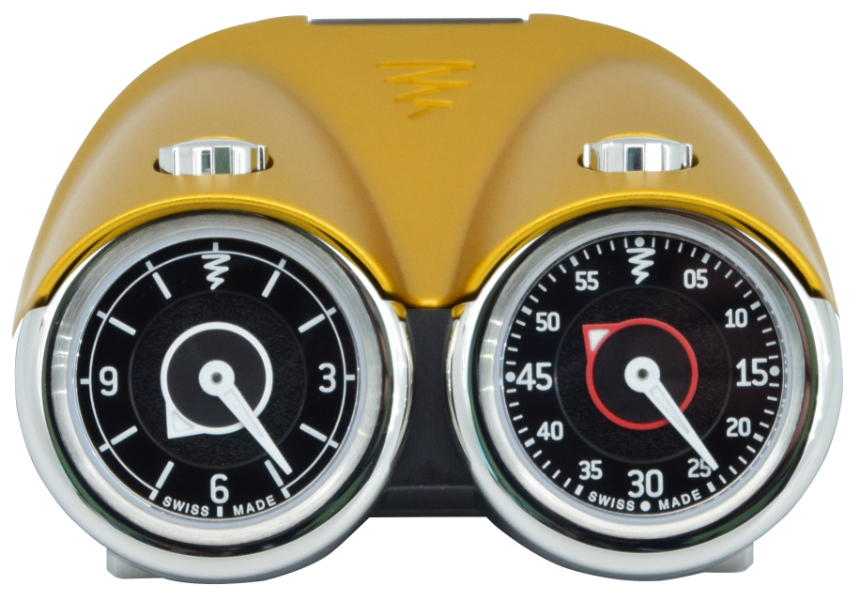 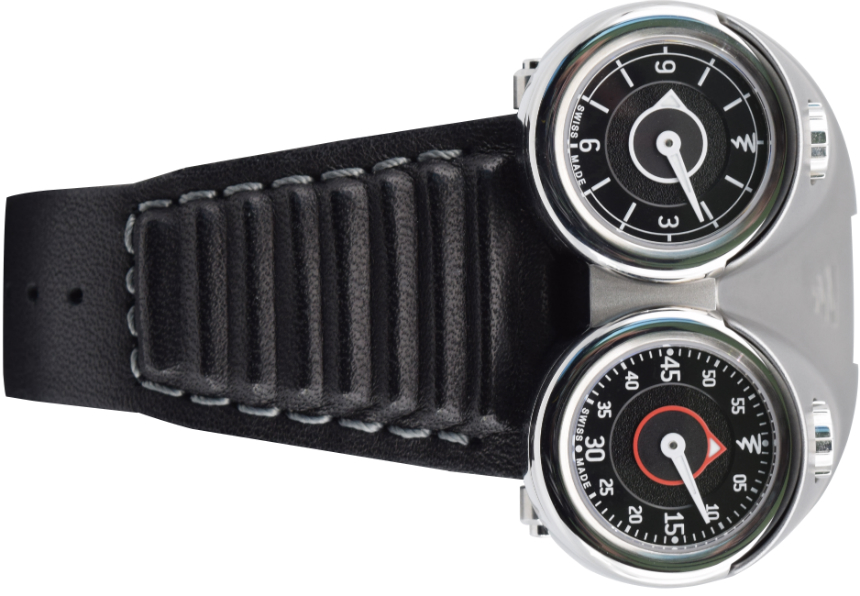 Finally, the Azimuth Twin Turbo will be paired with a ribbed leather strap that resembles the seats of vintage sports cars. Just Google for images of the interior of a Ferrari 250 GTO, and you’ll know what I mean. It’s a nice touch and shows that the designers of this watch are truly attuned to vintage automobiles. 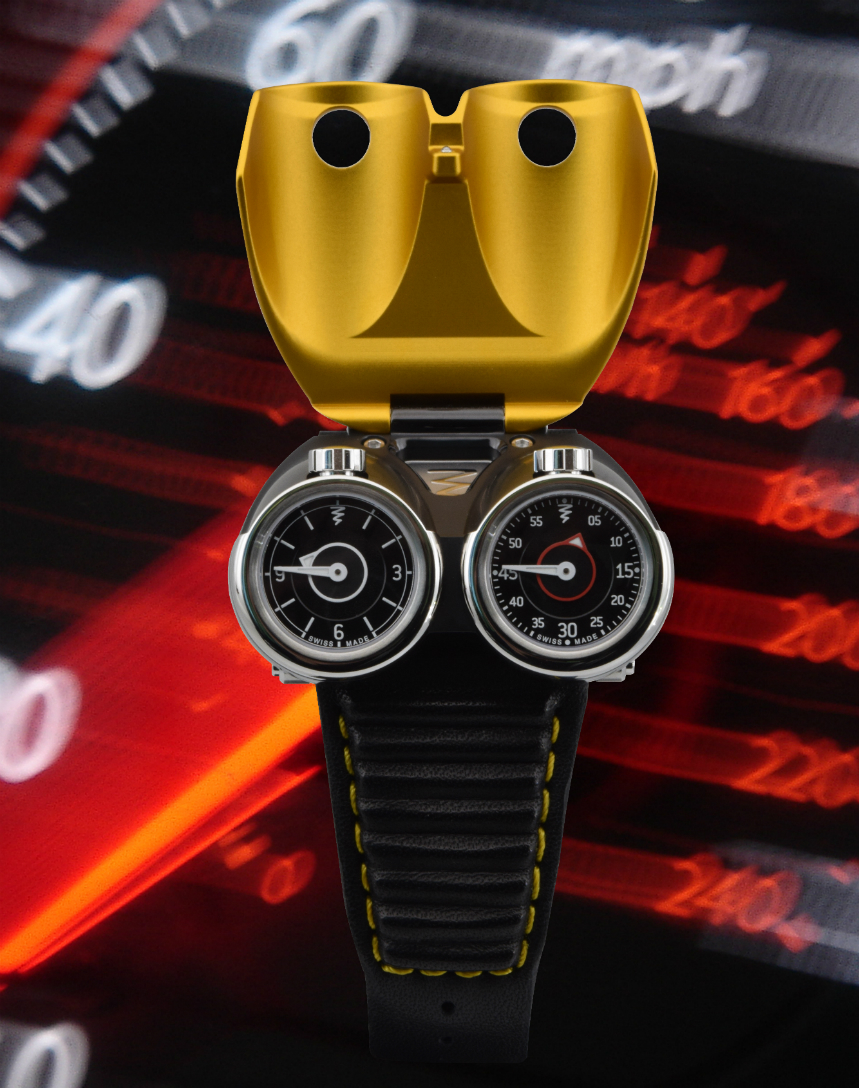