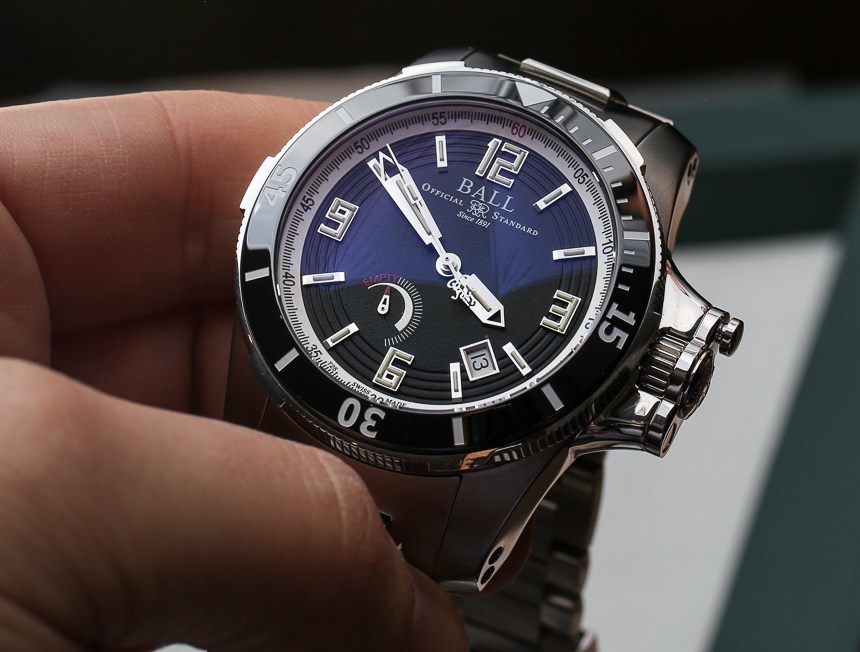 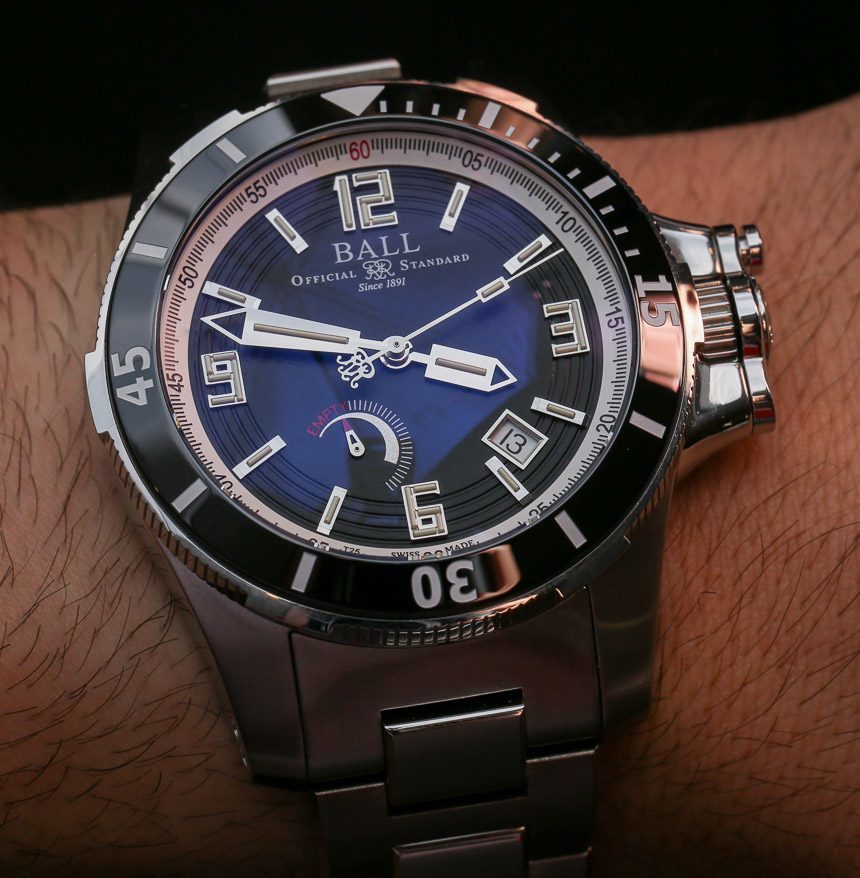 One Ball watch that should not be overlooked this year is the limited edition Ball Engineer Hydrocarbon Hunley ref. PM2096B-S1J-BK. Ball has been rather prolific as of late when it comes to both design variety and technology – which is great, but it also makes it difficult to keep track of everything that the Swiss brand (with American origins) is doing. The Ball Engineer Hydrocarbon Hunley represents an aesthetic refinement as well as technological advancement of the Ball Engineer Hydrocarbon Ceramic XV that I reviewed previously here. You can see that the former Ceramic XV model was the origin of this style, but the two watches are very different, aside from an overall look and feel.

After the Ball Ceramic XV came the slightly updated Ball Engineer Hydrocarbon Airborne (hands-on here), a cool model with some visual updates, but also Ball’s then brand new SpringLock system designed to protect the balance wheel against shock and vibration. The Ball Engineer Hydrocarbon Hunley is priced within a few hundred dollars of the Airborne, and I have a feeling consumers will have to make a difficult choice between them, because the two are a bit different and have distinct benefits. Both are pretty great watches, though. In my opinion, however, the Ball Engineer Hydrocarbon Hunley is the winner, simply because I like the look of the dial better and the addition of a power reserve indicator. 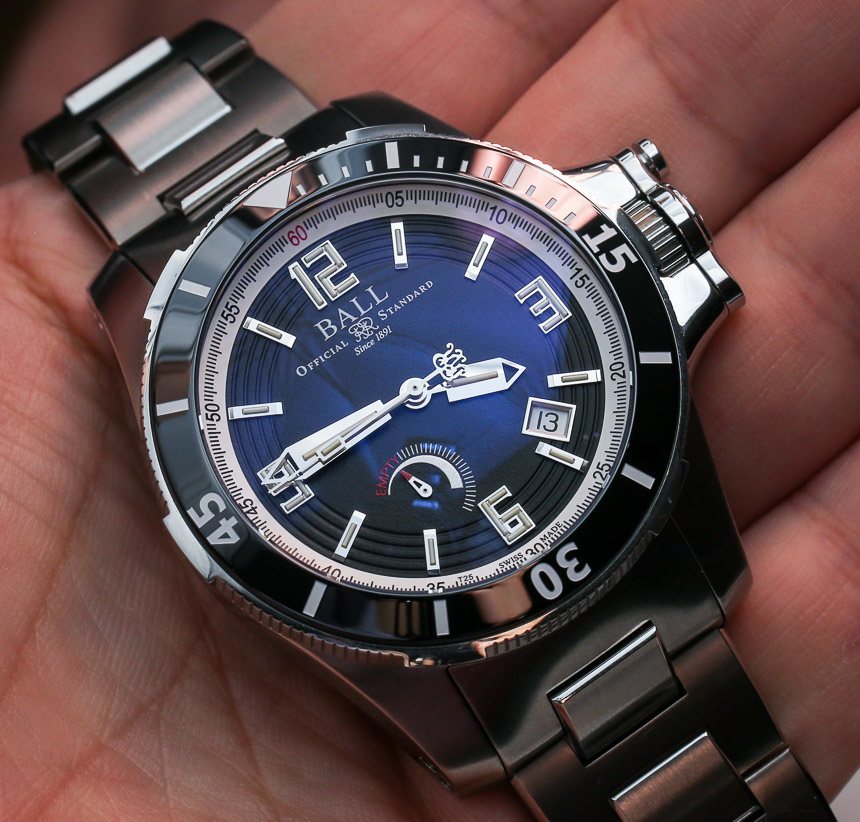 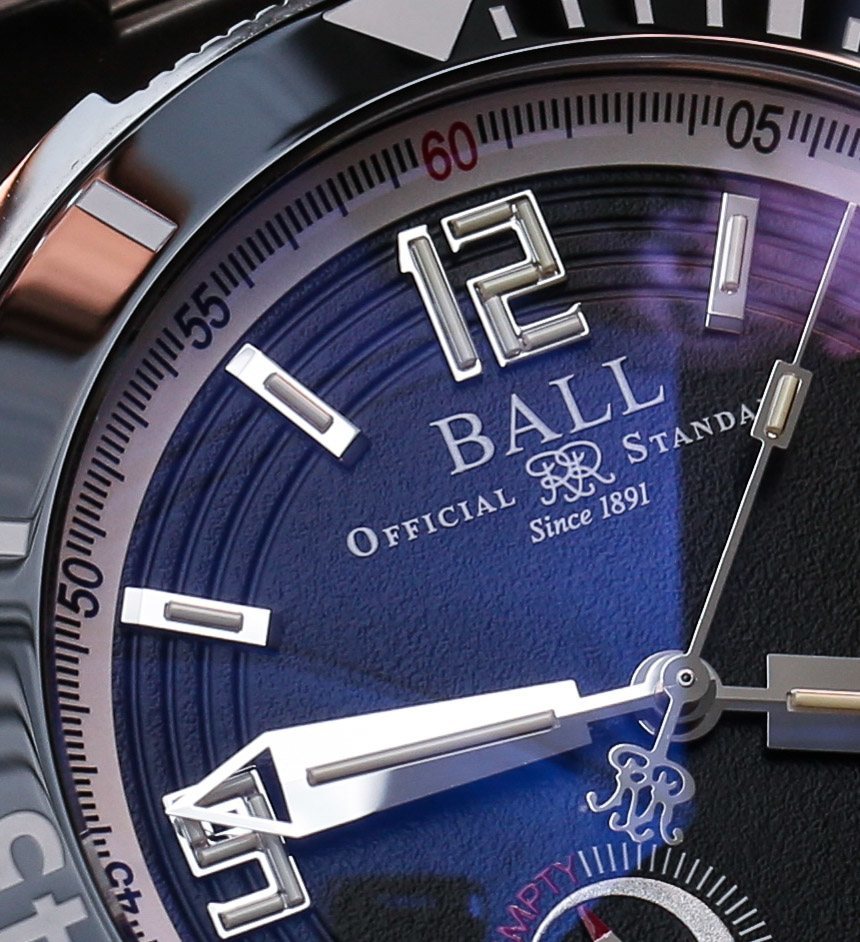 I’ve mentioned in the past that my “favorite” complication is probably a power reserve indicator. I find these to be the most useful and they further offer me the greatest ability to connect with the movement inside of the watches I am wearing. They are also very useful to me because I am not the type of person who wears the same watch each day. In addition to a date indicator window on the dial, the Ball Engineer Hydrocarbon Hunley also has an attractively designed power reserve indicator for what I believe is about two days worth of power reserve.

There is a lot to like about the Ball Engineer Hydrocarbon Hunley’s dial. It begins with a mostly matte texture dial that works well in contrast to the polished hands and hour markers. This means legibility is very good. I also like the rather clean look of the dial with the track of concentric circles being used only on the outside periphery of the dial, under the hour markers. Like other models in this Engineer Hydrocarbon family, the minute markers are placed on a curved flange ring around the main dial of the watch. Being a Ball product also means use of a lot of tritium gas tubes for lume – which self-illuminate for unrivaled ongoing legibility in the dark. 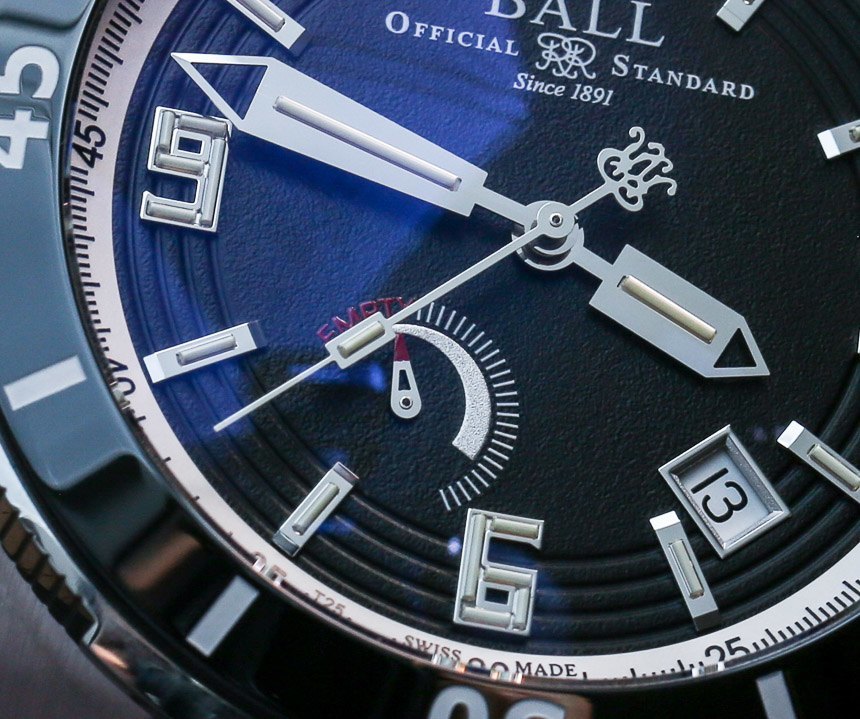 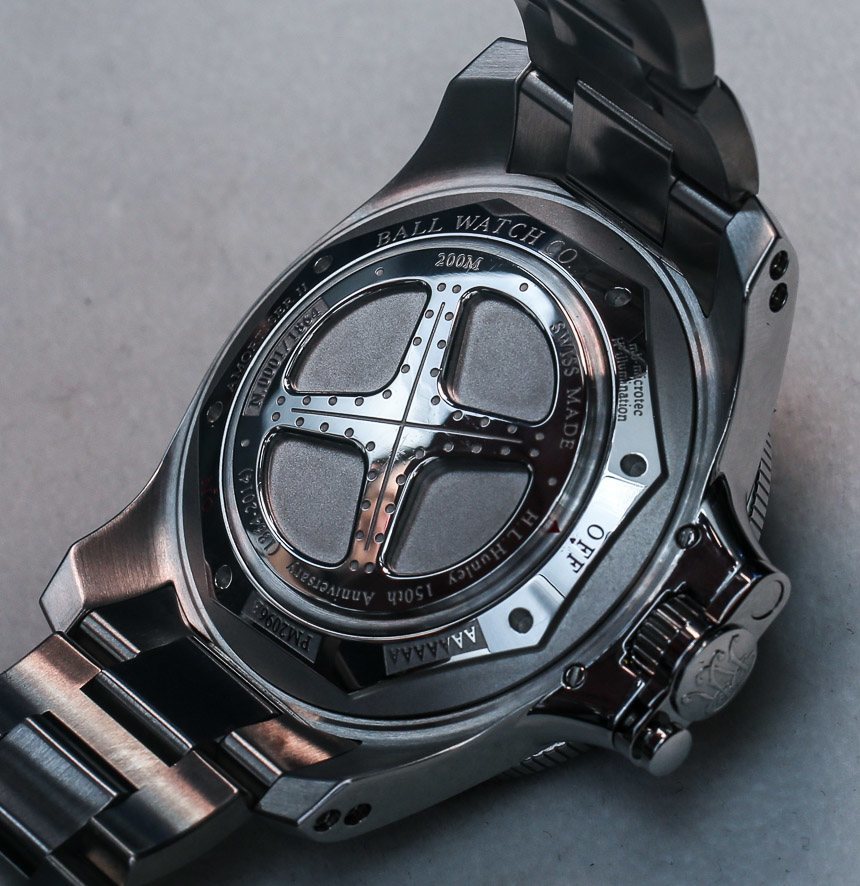 Ball also uses some traditional SuperLumiNova luminant, which is painted on the ceramic bezel insert. The diver’s style bezel rotates uni-directionally for added functionality. This is among the most refined Hydrocarbon Engineer designs in a collection of timepieces that try very hard to be both luxurious as well as masculine. One of the most interesting updates to the design of the Engineer Hydrocarbon case in the Ball Engineer Hydrocarbon Hunley is the use of a domed sapphire crystal, versus a flat one. Curved sapphire crystals are going to produce more glare as compared to a flat one, but the sapphire crystal is anti-reflective coated and legibility is very good in the watch overall. 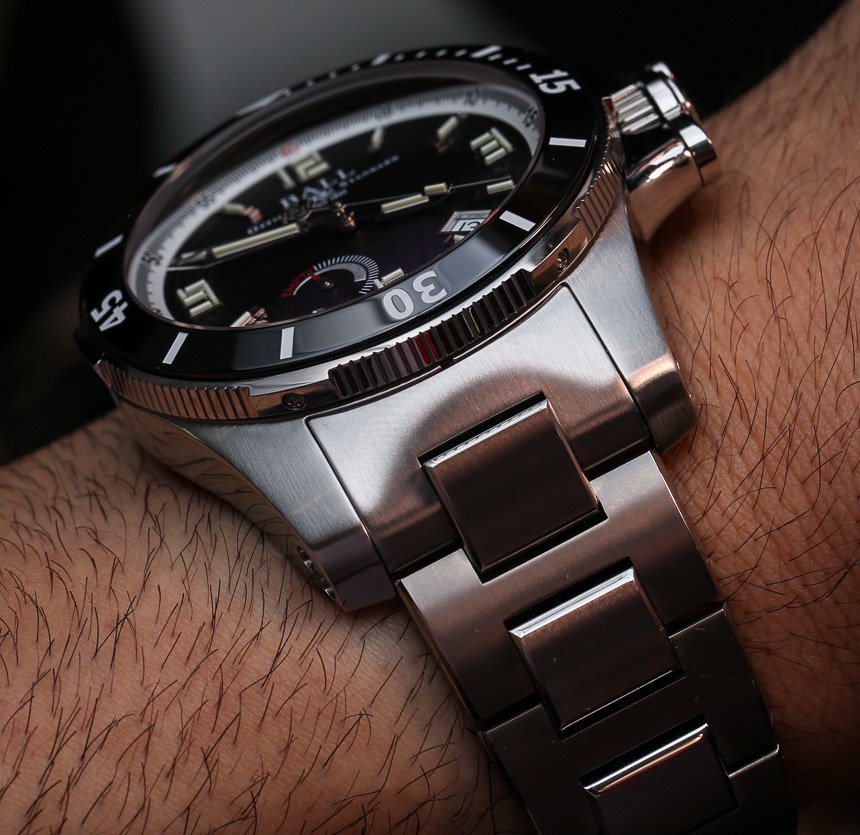 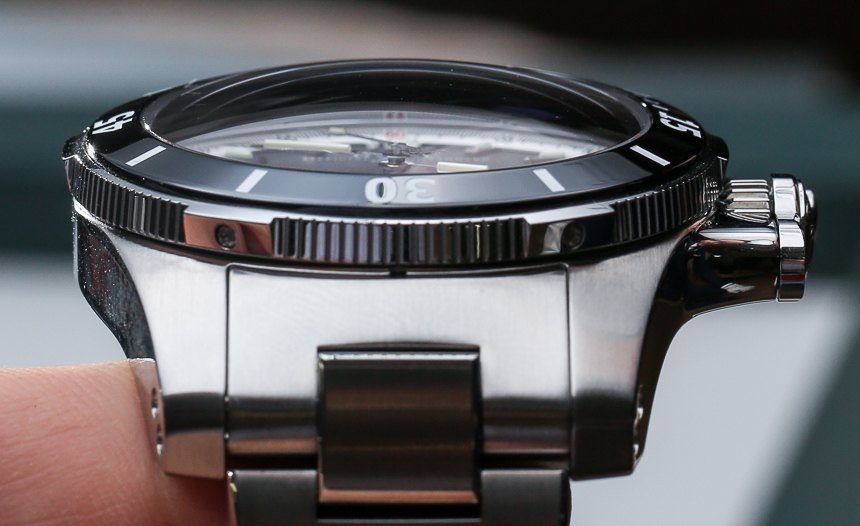 Used on just a few Ball watches from time to time, the Amortiser system is among the more exotic and interesting features I believe that I’ve ever encountered. Of course, the Amortiser, like SpringLock, comes from Ball’s brilliant technical director Philippe Antille (seen here testing SpringLock with Kiss band members). The concept of the Amortiser is difficult to fully explain, but describing how it works is simple. The idea of the system is to lock the automatic rotor of a mechanical movement into place and prevent it from spinning. The question is, why would you want to do this?

Automatic movements can be damaged by the automatic rotor moving out of place if the entire movement is subject to severe shock – such as a fall. By locking the automatic movement, you of course prevent the watch from self-winding, but you also protect the movement from types of serious shock. Ball claims that with the Amortiser system engaged (which the user must do manually) the watch can survive a fall from 5.2 meters (in their tests). That is sort of a big deal. In order to lock the rotor, you must first take the watch off your wrist, and then go to the caseback of the watch and literally turn the inner part of the caseback from the “Off” to “On” position. 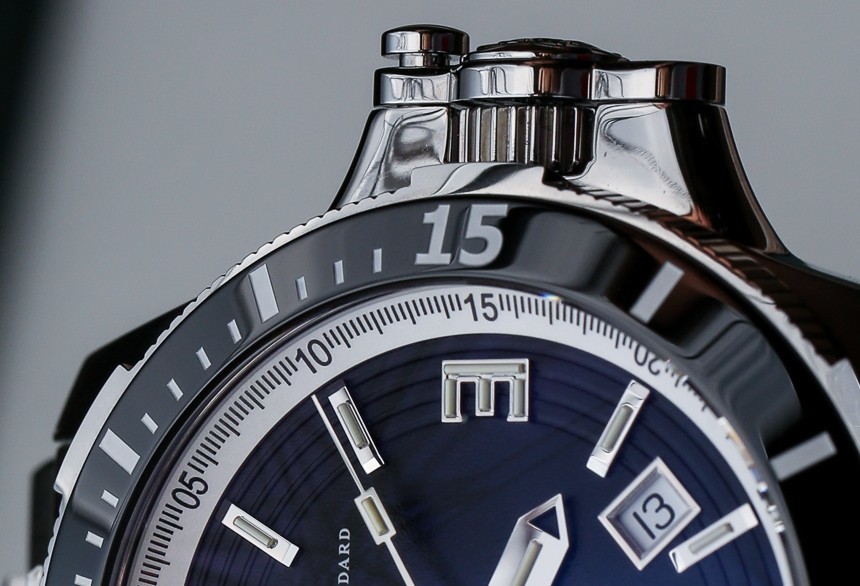 The brilliant part about having a power reserve indicator on the dial is that if you choose to have the Amortiser engaged for a long time, you can a least know the power left on the movement so that you can manually wind it if necessary. So for that reason, the Amortiser works really well with a power reserve indicator, because with it engaged, an automatic watch is turned temporarily into a manually wound watch. It is thus impressive that even with this moving caseback part, the Ball Engineer Hydrocarbon Hunley watch has 200 meters of water resistance. It also has shock resistance of up to 7,500 Gs and 4,800 A/m of anti-magnetic resistance.