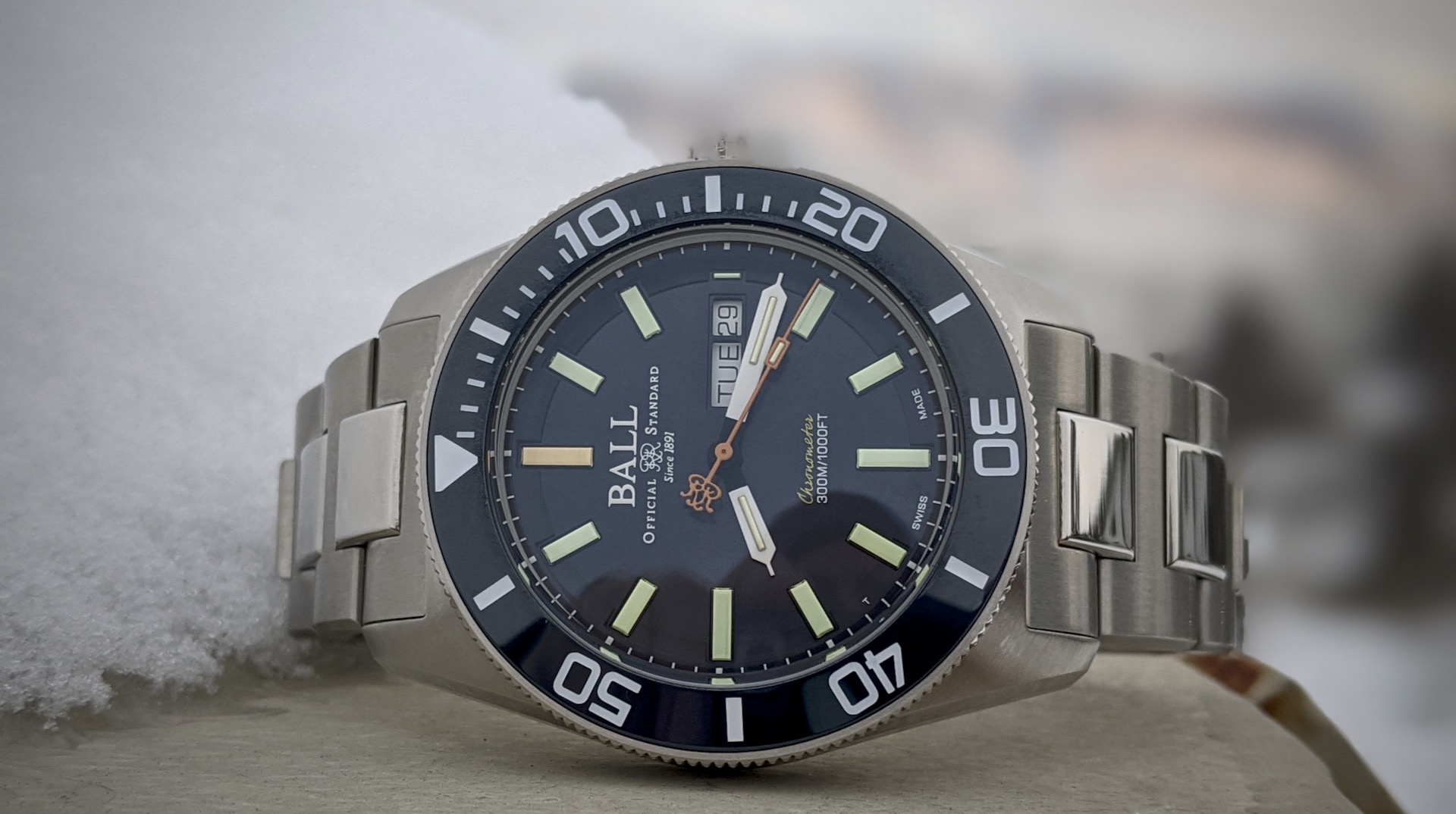 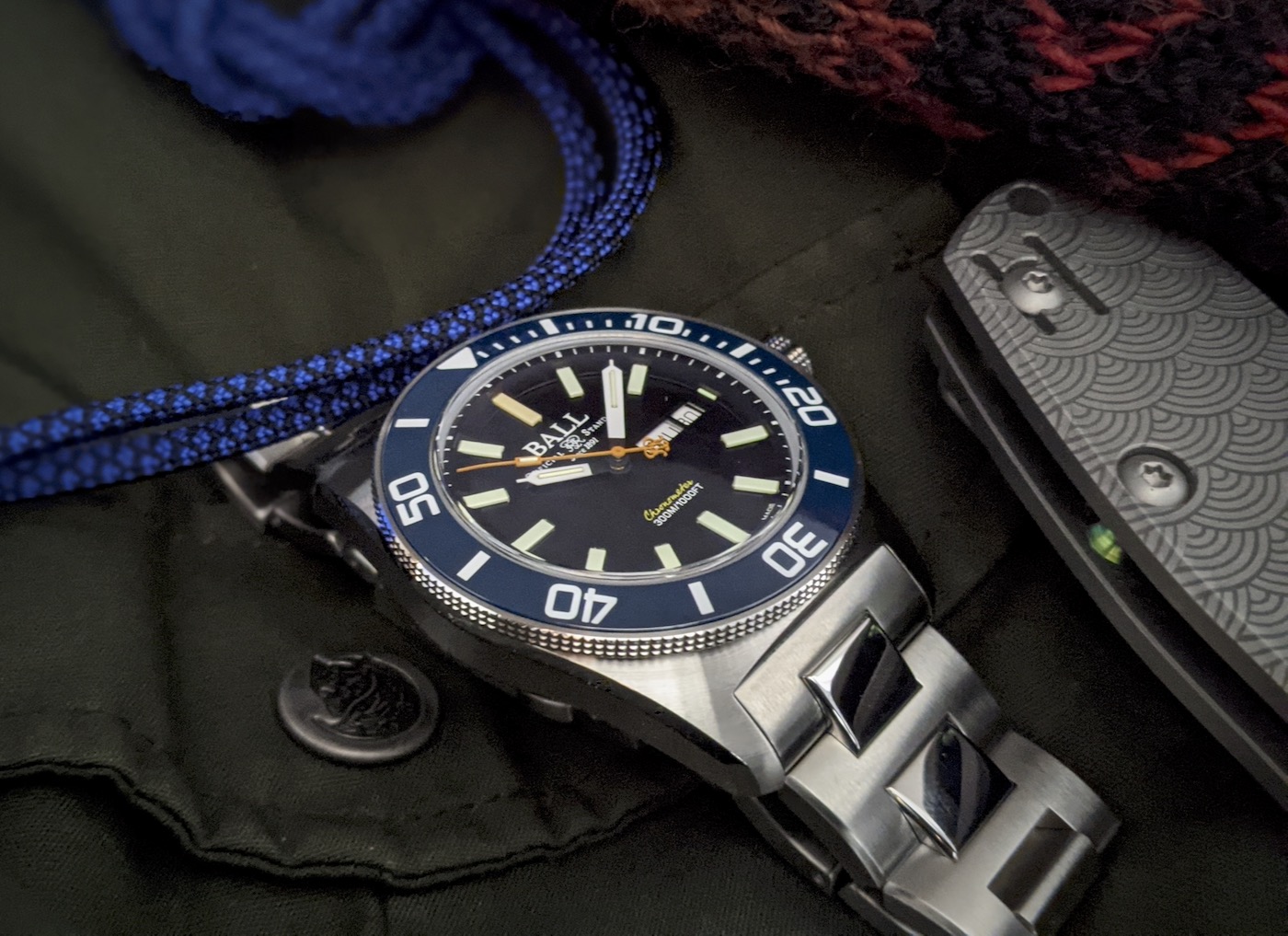 Vintage-inspired dive watches have been one of the hottest trends of the past decade, so given the name of this watch – the BALL Engineer Master II Skindiver Heritage – you’d be forgiven for assuming that this is just another in a long list of back catalog reissues. While most modern throwback watches fully embrace vintage aesthetics, the BALL Skindiver Heritage takes only a few stylistic nods from the past. Remove “Heritage” from the name, and this is simply a well-built dive watch with some subtle vintage cues (like the lack of crown guards) and more than a few modern tricks up its sleeve. Strap on the Skindiver Heritage and one thing that’s immediately apparent is that there’s nothing vintage about the sizing. In reviews, you’ll often hear us say that a watch wears smaller than its dimensions would suggest – not so in the case of the Heritage Skindiver. The 42mm case may not seem overly large on the spec sheet, but when coupled with the 15.2mm height and long 53mm lug-to-lug distance, there’s no question that you’re wearing a large, overbuilt, and fully capable modern diver. 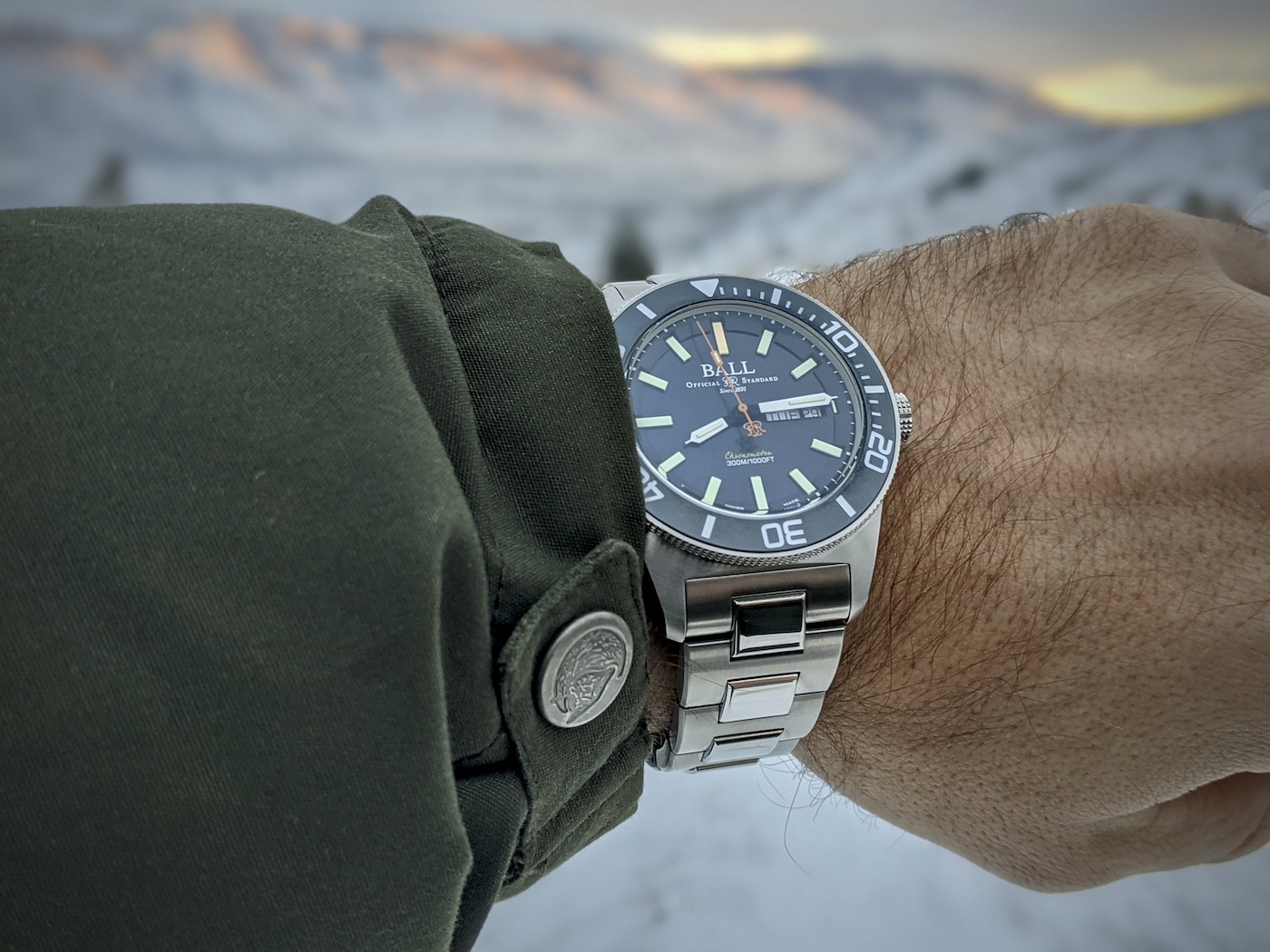 One of the defining features of BALL watches is that they’re invariably overbuilt. Need lume for nighttime legibility? Ball opts for tritium gas tubes. Want the watch to resist magnetism? The Skindiver Heritage is resistant to 80,000A/m.  To complete the package and make sure the watch can withstand hard use, Ball builds in shock resistance to 5,000Gs and 300m of water resistance. While German brands like Sinn and Damasko are often heralded as the go-to tool overbuilt ready-for-the-apocalypse watches, the severe aesthetics aren’t for everyone. This is where BALL comes in; these are highly capable tool watches but very much Swiss in their style and execution (albeit with the blood of the American West running through their mechanical veins).

Getting back to the case, the BALL Skindiver Heritage is a large watch, no question, but the size is tempered by the shape of the midcase, which gives the impression of a much thinner watch – much in the way that the Tudor Black Bay midcase doesn’t. In addition, those long lugs slope down and hug the wrist, allowing the watch to wear relatively comfortably on my 6.75” wrist. Don’t get me wrong, though, it still wears like the large, hefty watch that it is. The case shape is traditional for a skindiver, eschewing crown guards and opting instead for a large, signed crown with ample knurling that’s easy to grip and smooth to operate. The stainless steel case is nicely brushed on the top and mid-case with high-polished bevels along the transition. The lines are sharp and the finishing is excellent – exactly what I’ve come to expect from BALL. 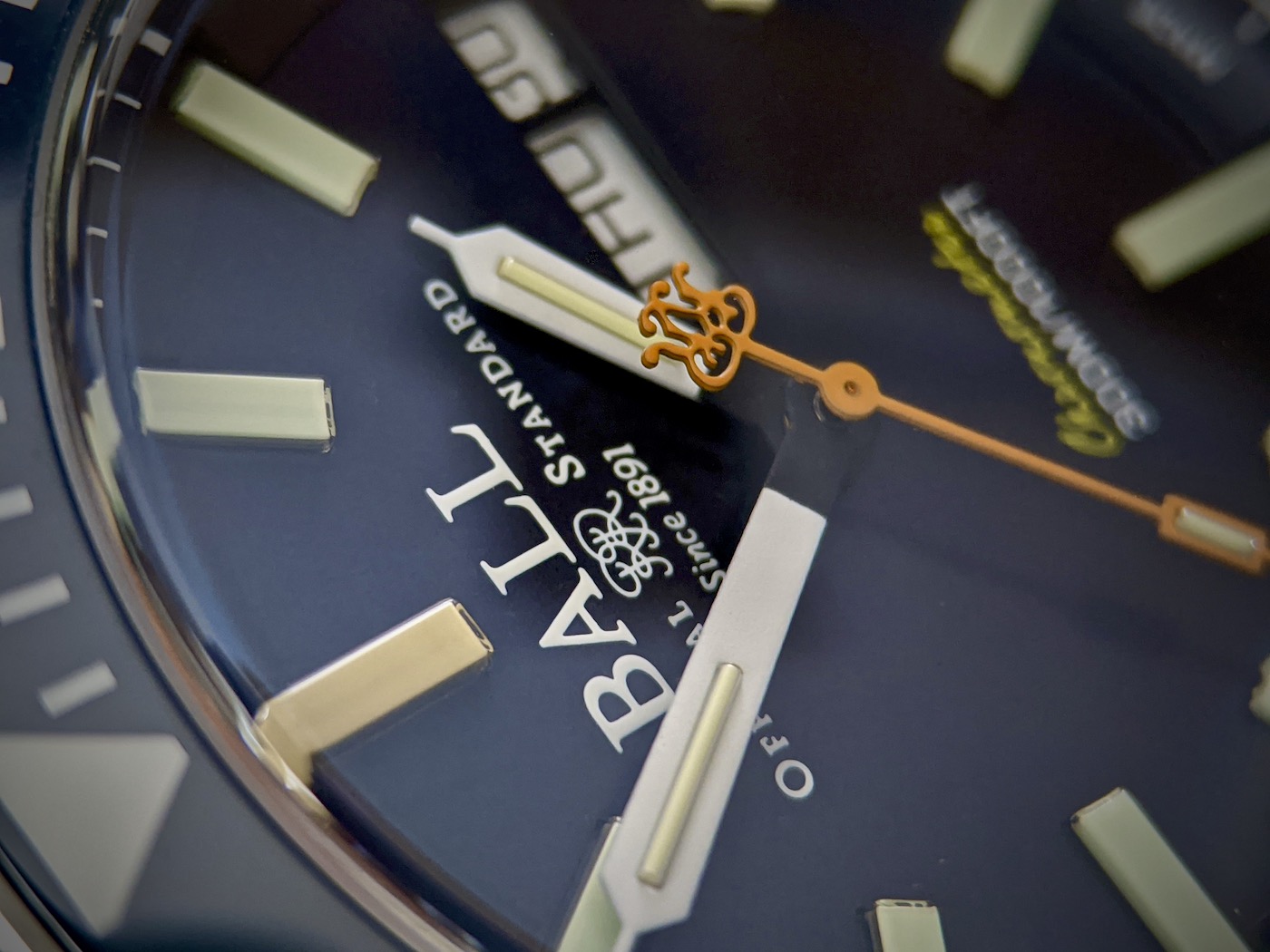 The Skindiver Heritage comes on either a rubber strap or H-link bracelet with polished center links. Ball opted for a 22mm bracelet, but the taper helps reduce some of the visual (and physical) heft of the watch and the polished center links do make the watch into more of a dress diver and thus a bit more versatile for some consumers. That said, I would have preferred a fully brushed finish. The bracelet is comfortable and complements the case, but it’s let down by using a pin and collar system to remove links (apologies to BALL; I mangled one of the pins trying to size the bracelet) and a stamped push-button clasp. I’ve made this argument before, but when you see microbrands producing bracelets with screwed links, milled clasps, and tool-free adjustments for under $500, it’s time for the bigger brands to step up. 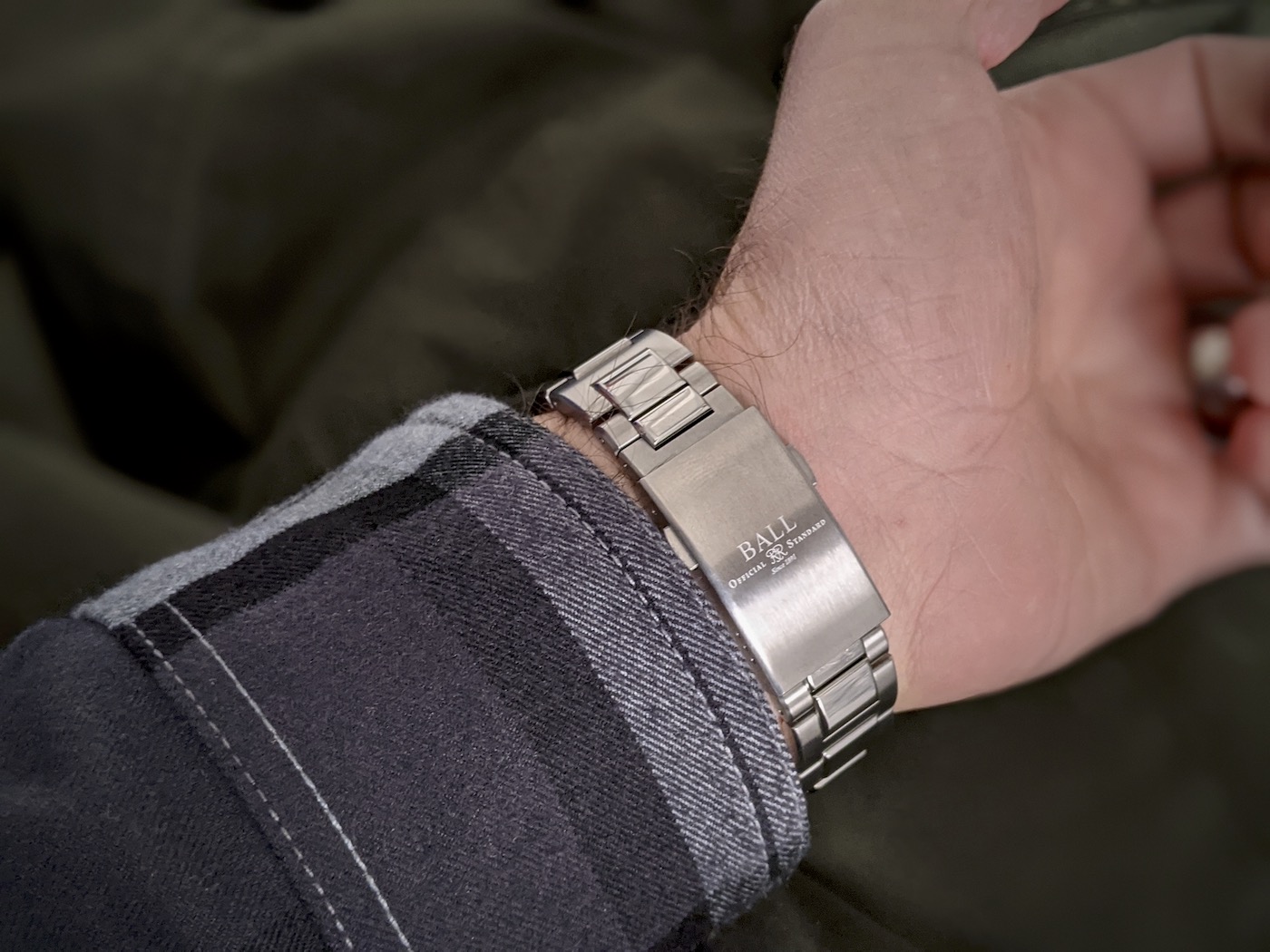 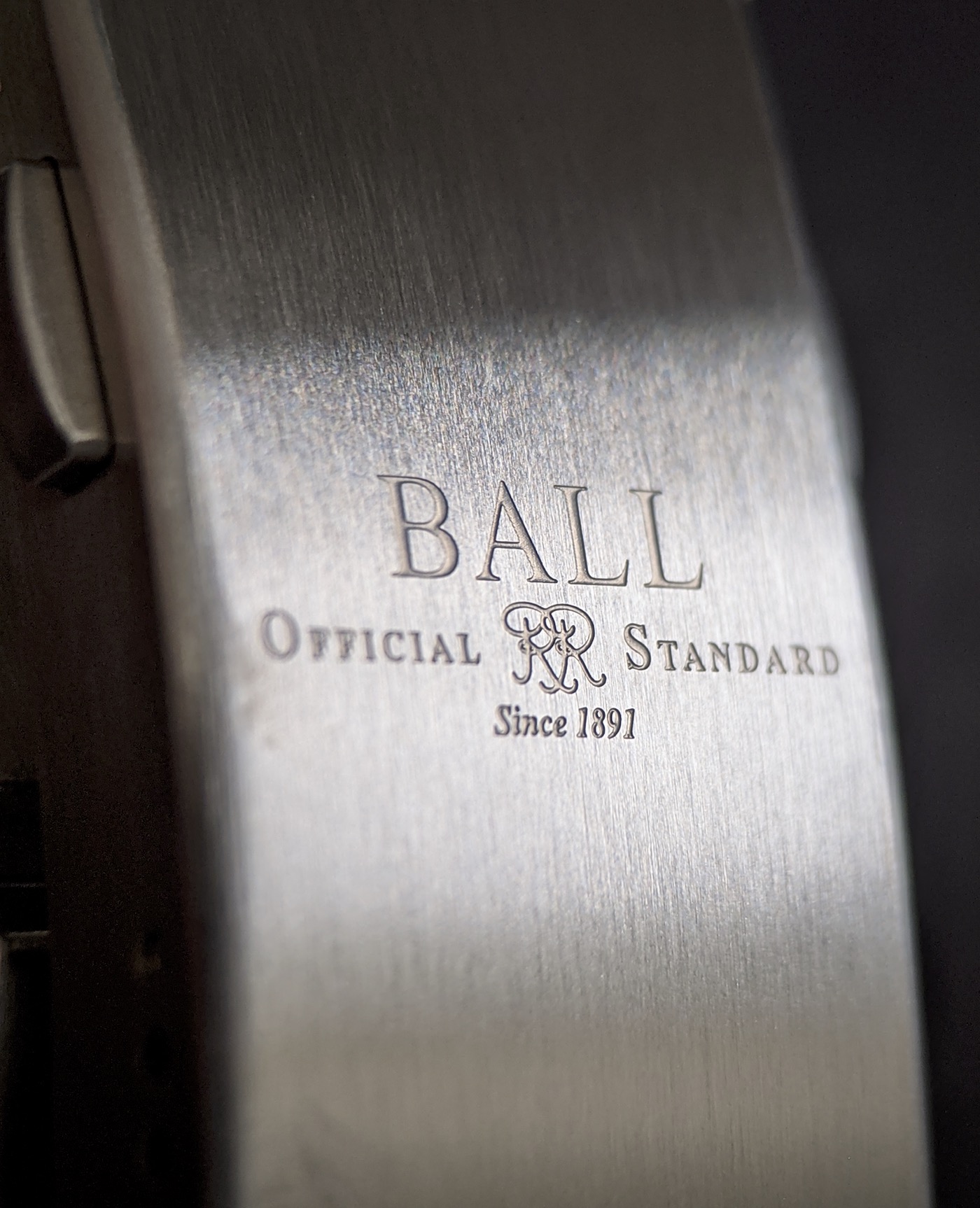 The BALL Skindiver Heritage comes in either a black or blue dial, but both become much more colorful when the lights go out thanks to fully lumed bezels and tritium gas tubes on the markers and hands. If you’ve never experienced tritium gas tubes on a watch, they’re a treat to behold at night, and there’s a reason they’ve gained a cult-like following. Unlike traditional lume that requires an external light source to charge and quickly loses intensity, tritium (the radioactive isotope of hydrogen, H3) undergoes beta decay, releasing a steady source of light, meaning that it’ll be just as bright at 5am as it was before bed. By encapsulating the tritium in gas tubes coated with different phosphor compounds, the tubes can also glow in a vast array of colors and remain safe due to being housed in a non-hydrogen-permeable container. With a half-life of 12.3 years, tritium will continue to glow brightly for years, but when the time comes, BALL will replace the tubes for a nominal fee. 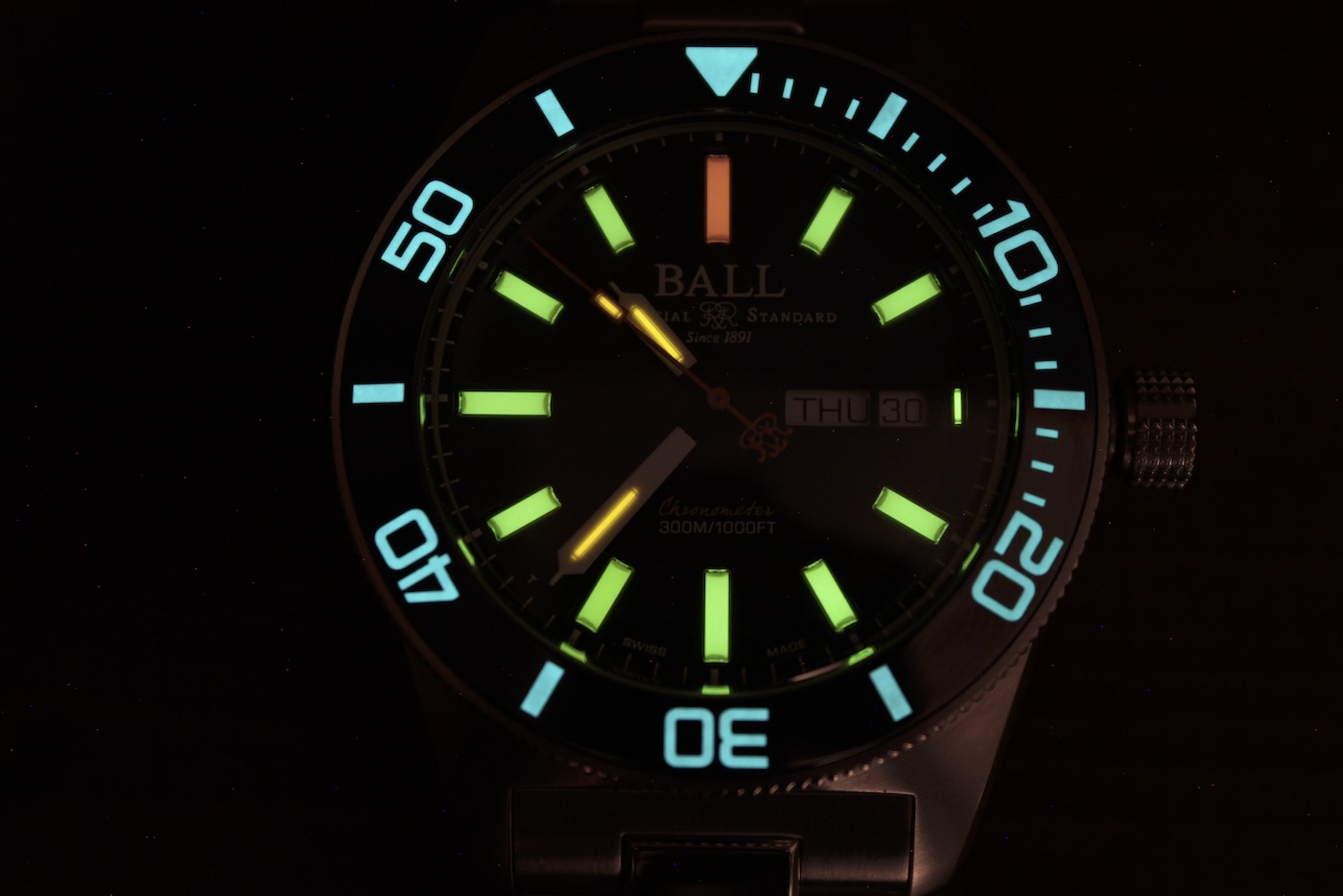 In the case of the Skindiver Heritage, BALL made use of 15 micro gas tubes in three colors – green for the hour markers, orange for the 12 o’clock marker, and yellow for the hands. Though these colors are certainly most visible at night, they do still glow faintly during the day, adding color to the dial. Combined with the bright orange minute hand, the result is a fun and colorful watch day or night. Just be sure you’re in the market for a colorful watch – those preferring austere monochromes should look elsewhere. Or, if you want even more color, take a look at the BALL Marvelight III Caring Edition. 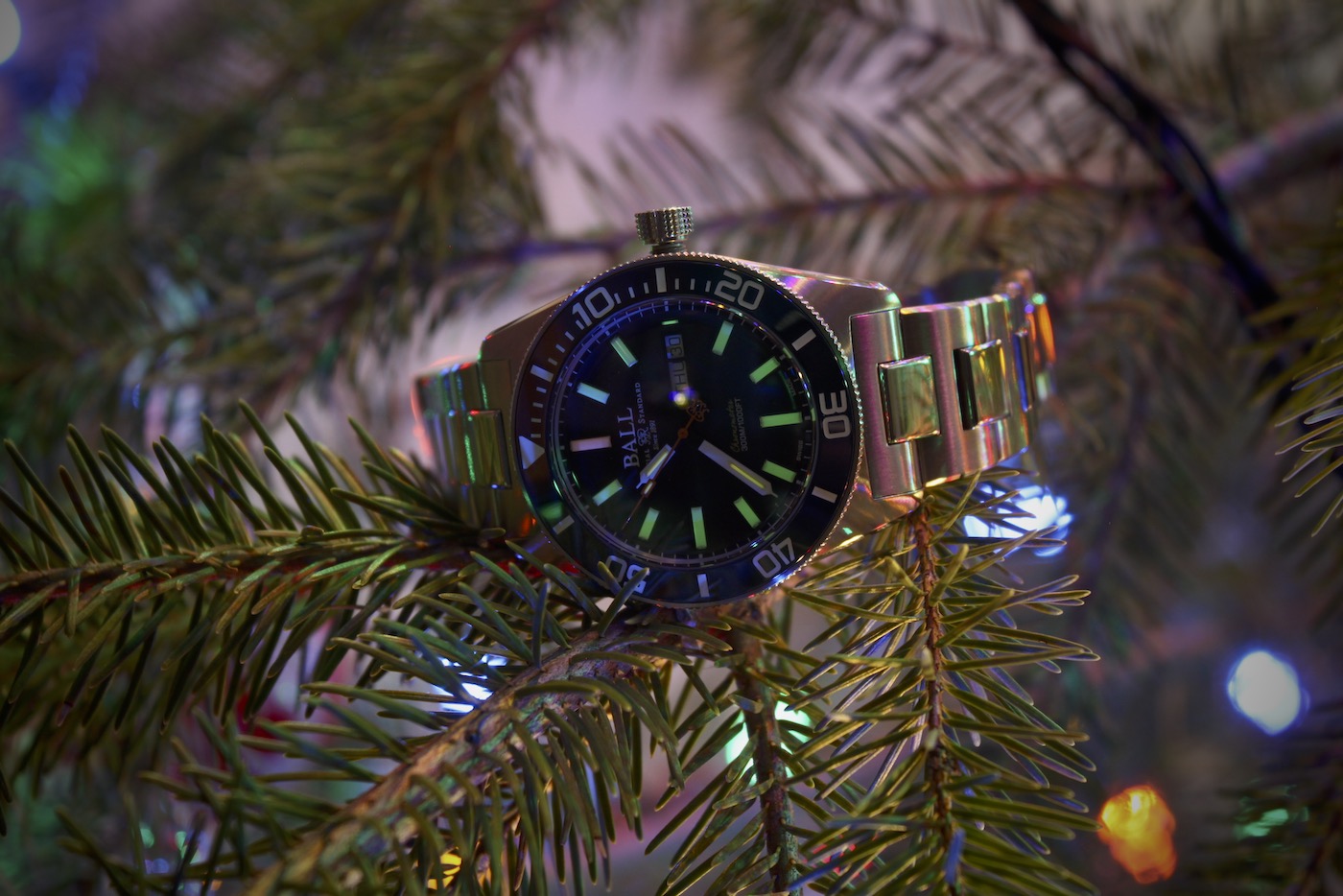 Though the tritium gas tubes are always the headliner in BALL’s watches, the dial and bezel can certainly hold their own on the stage. Sure, the layout is nothing new, but it’s executed cleanly and attractively. In other words, it’s a familiar and modern design that should appeal to many. The handset does differentiate the watch from most others on the market, with white syringe hands for the hour and minutes and a striking orange seconds hand. The seconds hand offers a fun pop of color, but the RR counterweight (a nod to the brand’s provenance on the American railroads) is rather ornate. I like it, but I can see why some find it a bit garish. The day-date function at 3 o’clock is one of those love-it-or-hate-it elements. I have to say that during COVID times and working from home every day, I appreciate the day function more than I normally would. 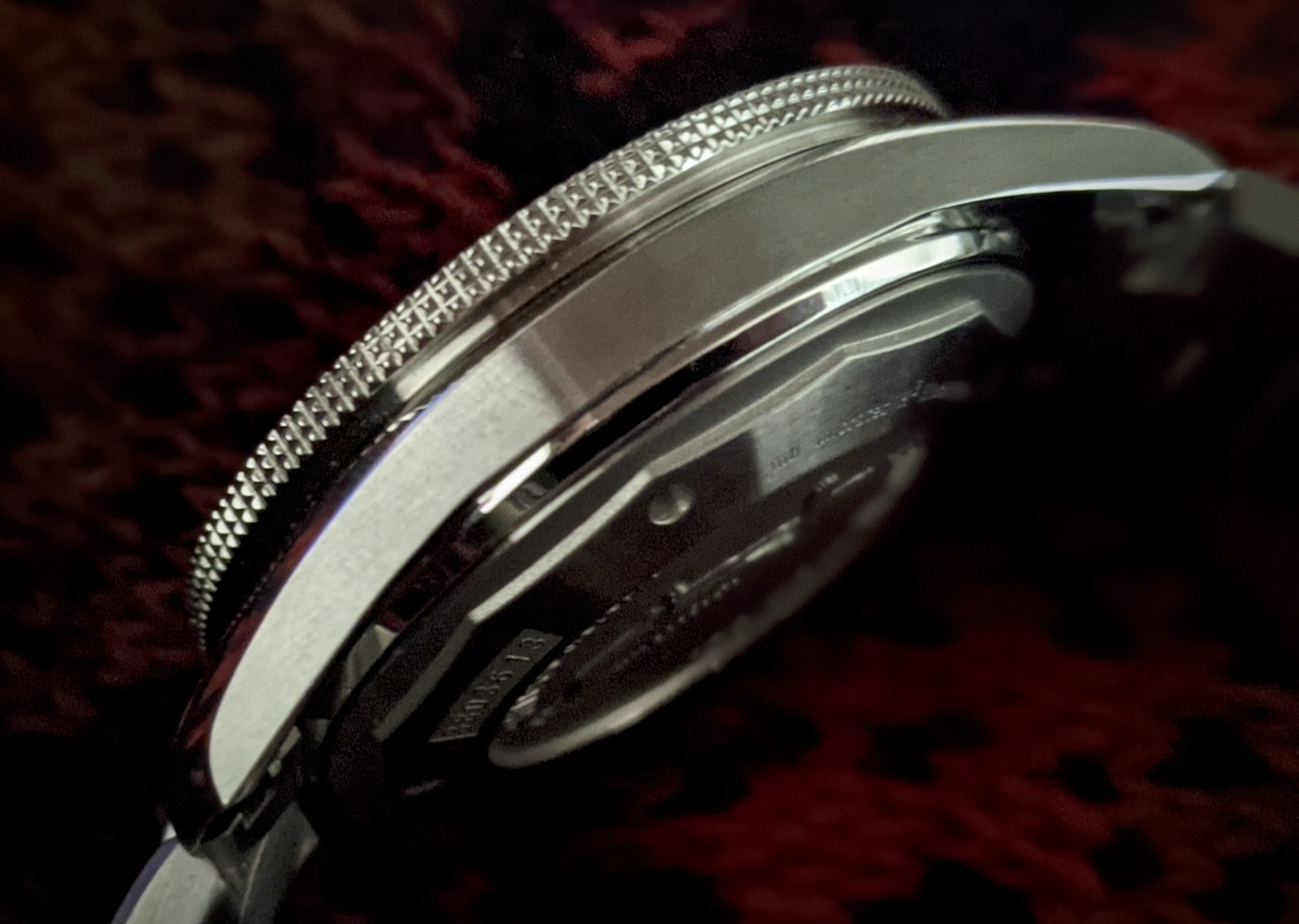 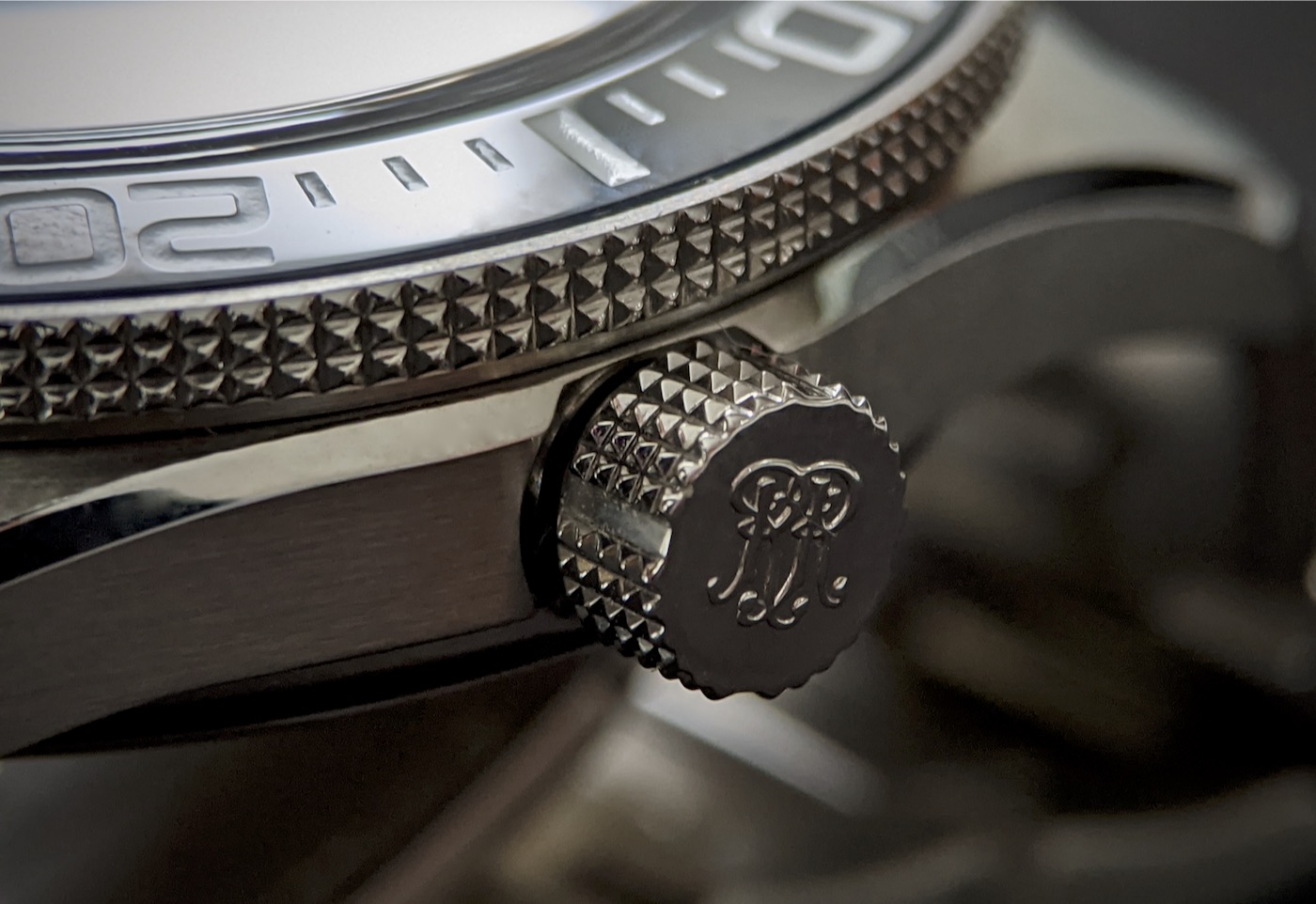 The bezel on the Skindiver Heritage is particularly impressive. It’s easy to grip, and the action of the 120 clicks is firm and positive with pronounced clicks and no back-play. Very nice. The bezel insert is ceramic with lumed markers that glow a pale blue, adding an additional color to the mix at night. No complaints whatsoever. 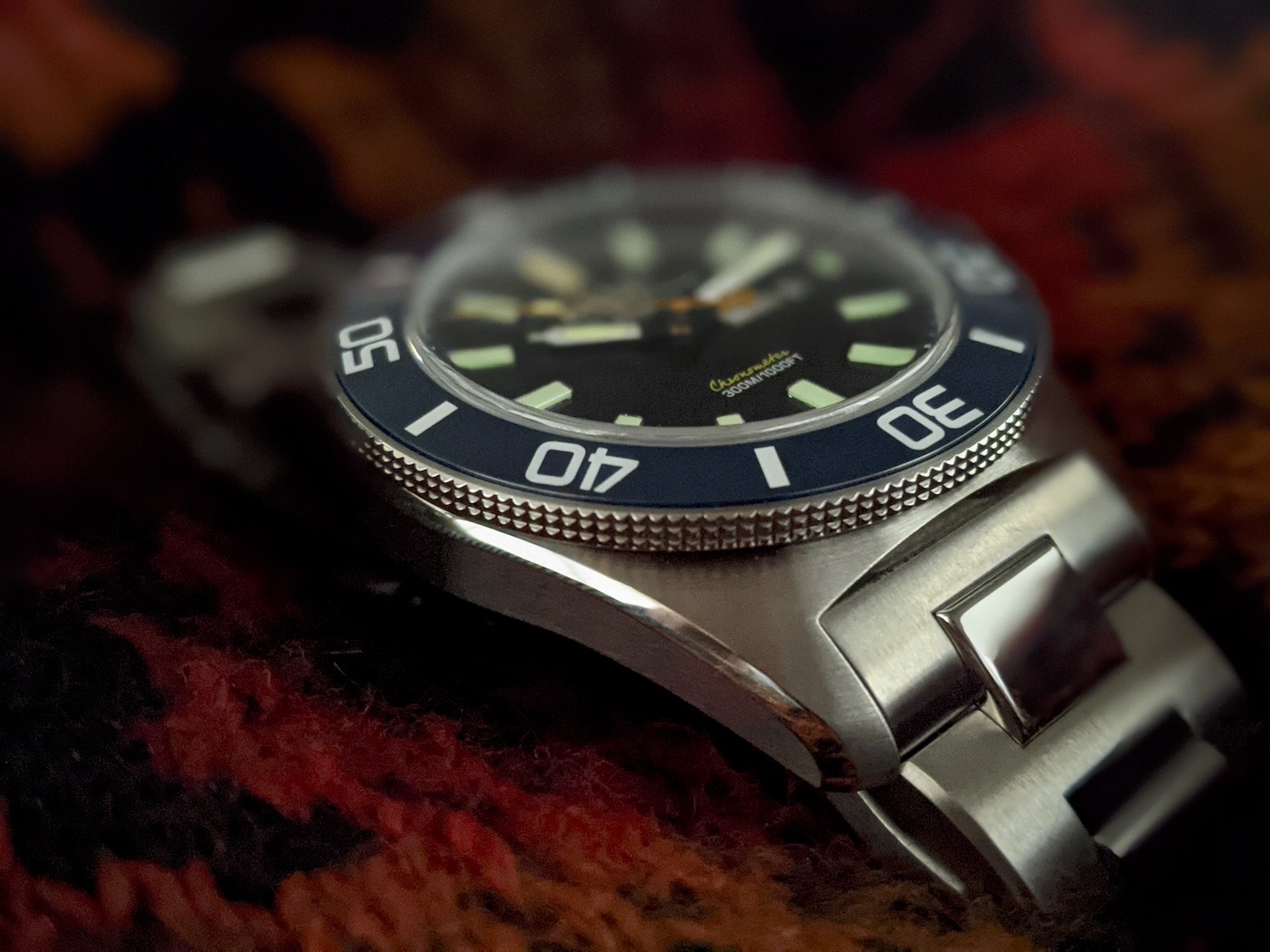 Powering the Skindiver Heritage is the COSC-certified automatic caliber BALL RR1102-C, which is a modified Swiss made ETA 2836-2. This movement is essentially the day-date version of the tried and true ETA 2824-2 and features 25 jewels, a 38-hour power reserve, and beats at 28.8kbph. COSC certification is certainly an added bonus – each movement is sent to one of the COSC labs and subjected to a series of tests, among which is certifying that the watch will run with an average daily rate of -4 to +6 seconds/day with low positional variance. As mentioned earlier, BALL also employs an Amortiser anti-shock system to protect the movement and is shielded from magnetic fields up to 80,000A/m. 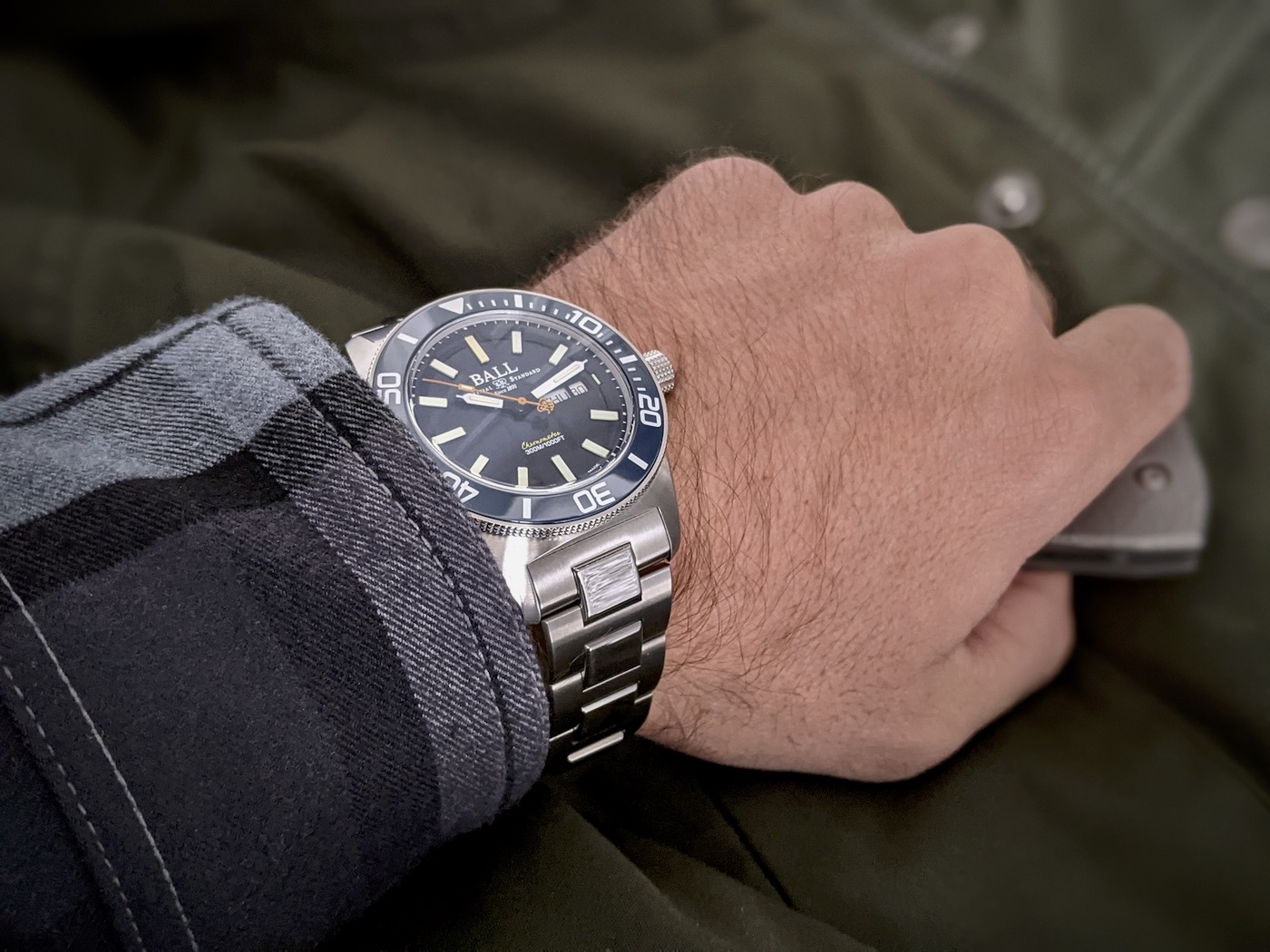 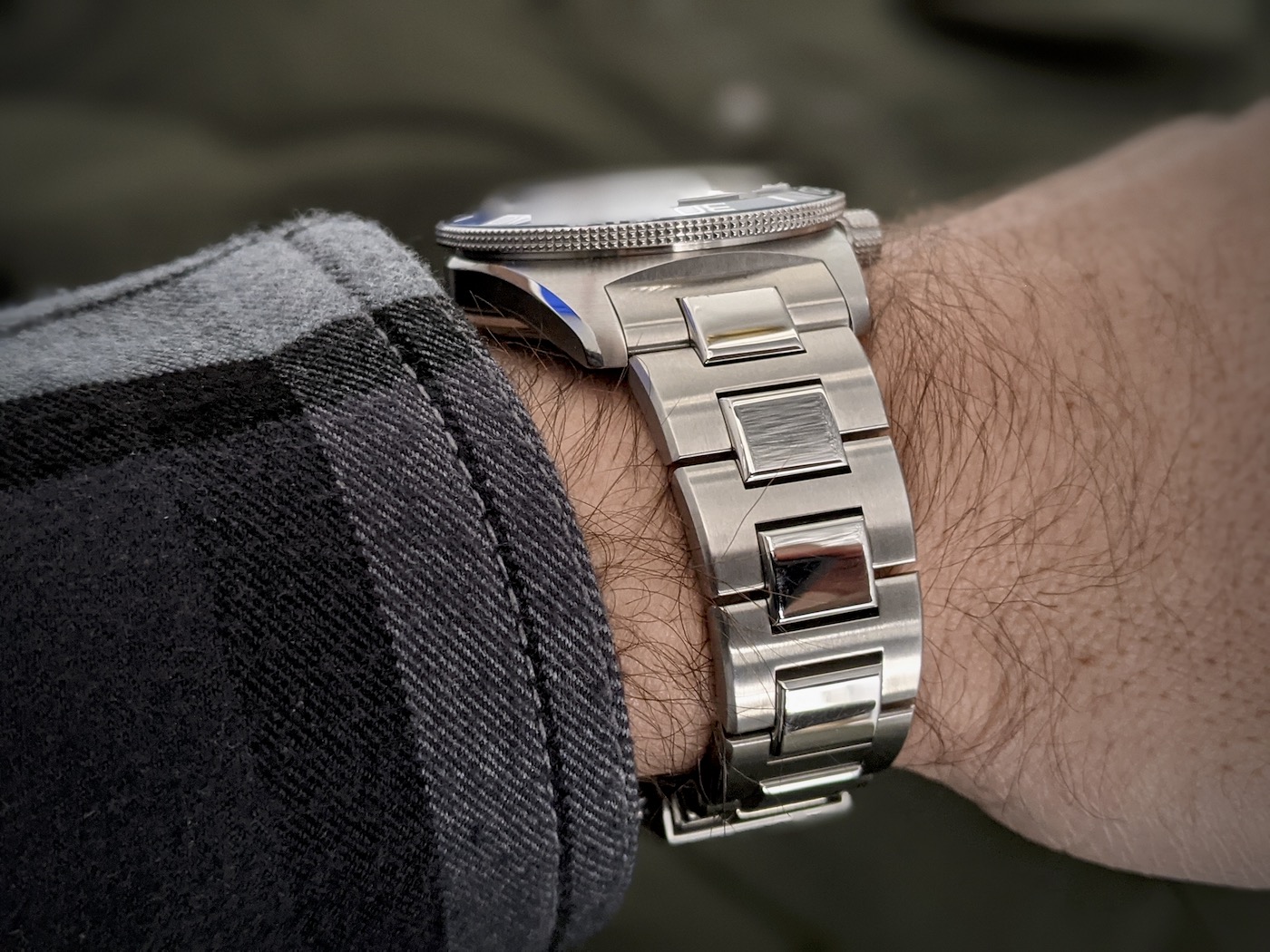 Looking at watches comparable to the $2,949 BALL Skindiver Heritage, it really depends on what you’re after. If you’re interested in more of a vintage look and an in-house movement, the Tudor Black Bay Heritage is hard to ignore (albeit for an additional $850). The Tudor certainly has BALL beat on the bracelet and the 70-hour power reserve on Tudor’s MT5602 is a bonus, but you’re missing out on the outstanding tritium gas tubes, ceramic bezel, and funky mix of colors on the BALL. That said, if what you’re really after is the tritium gas tubes and you’re on a tighter budget, Marathon offers a wide range of military watches, including the 41mm GSAR automatic diver’s watch for $1,608. The Marathon GSAR offers a purpose-built diver with amazing tritium gas tube lume, but one with a completely different aesthetic. 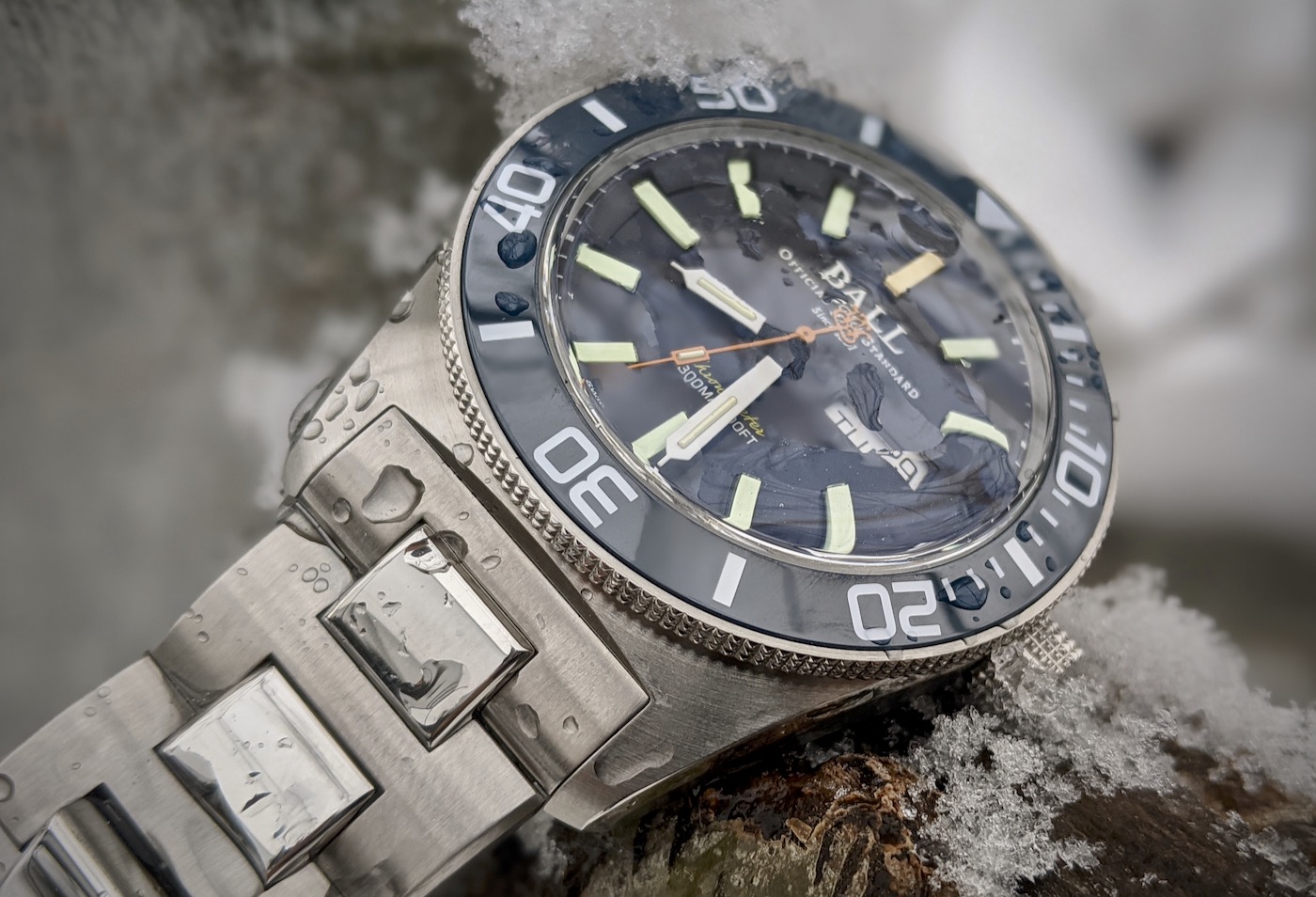 For those looking for a dressy tool watch with best-in-class illumination, classic Swiss styling and execution, but a colorful personality, the BALL Engineer Master II Skindiver Heritage is worth a long look. The Skindiver Heritage comes is priced at $2,949 USD and more information can be found on the brand’s website.