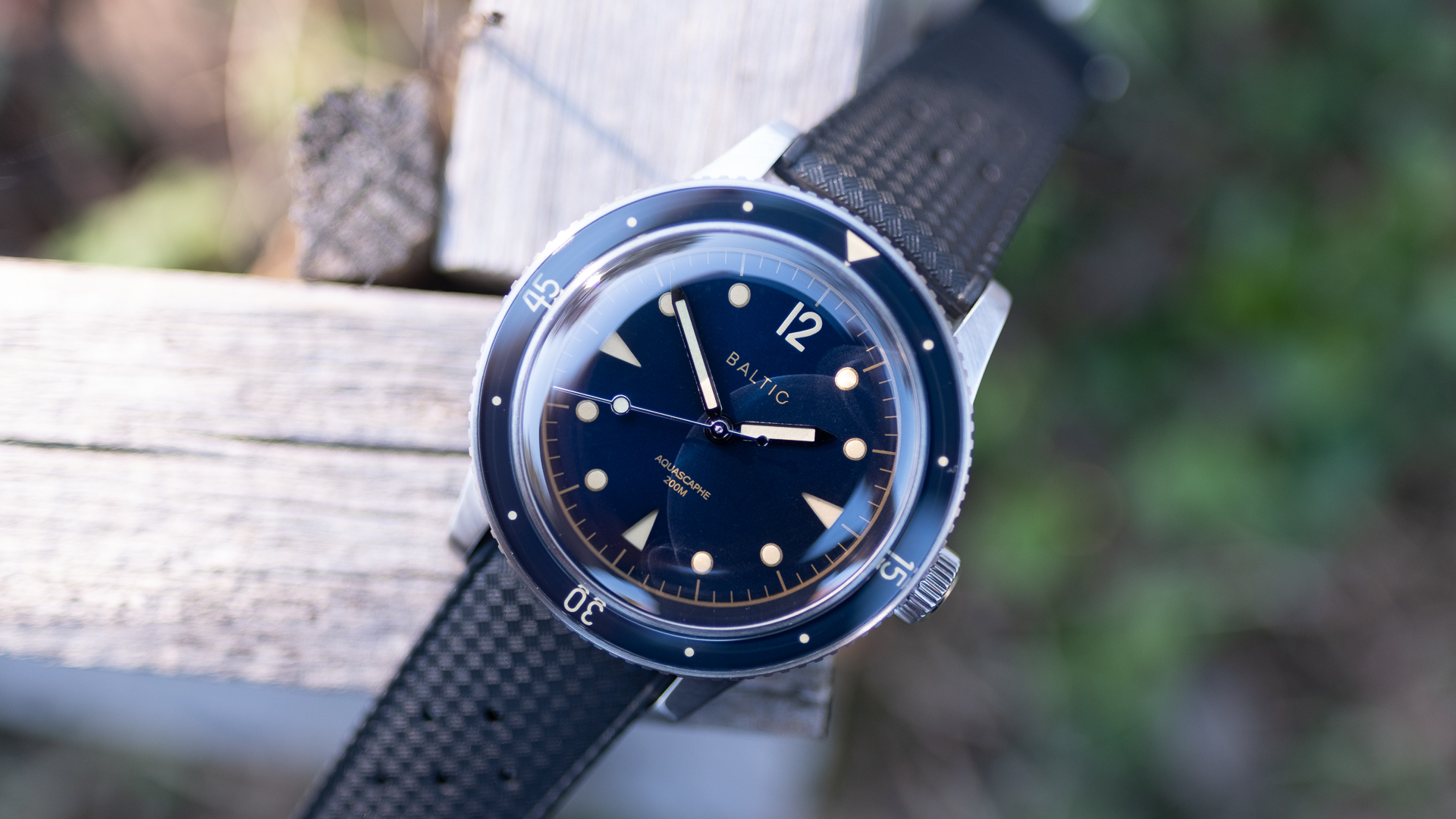 I was first introduced to Baltic Watches when it released its bi-compax chronograph line. These are high-quality, traditional timepieces that focus on affordability. When I heard the brand was developing a diver, my interest was piqued. Thus came the Aquascaphe. The name is a bit of a tongue-in-cheek reference to the famous, albeit well-covered Bathyscaphe submersible of the 1960s. The overall aesthetic that Baltic adopted on the Aquascaphe is a direct nod to the old skin divers of the 1960s and 1970s. From the case design to the general aesthetic of the dial, it’s apparent where Baltic’s designers drew their inspiration. There are three different versions of the Aquascaphe available: black, gilt, and blue gilt. I opted for the blue version, as I’m a sucker for both a blue dial and a sunburst dial independently. If you combine the two, then I’m a goner. 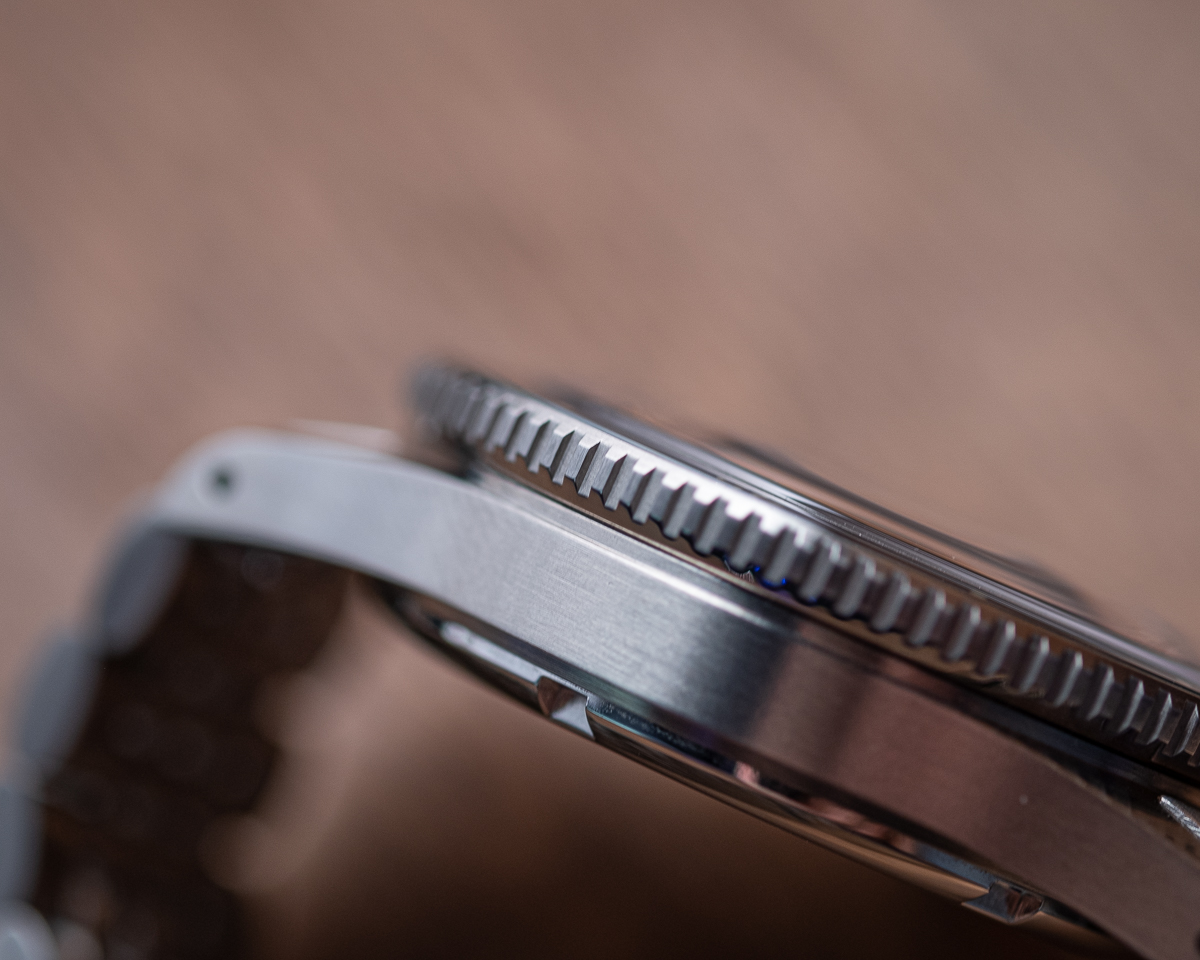 As I stated earlier, the design of the Aquascaphe takes a lot of cues from the skin divers of yesteryear. The squared-off angular drilled lugs jutting straight out of the case couldn’t signify that more. Now, to be clear, this is a good thing. Those watches are classics and collectible for a reason. Baltic also opted for a simple and complete brushed finish throughout the 39mm steel case. The bezel on the Aquascaphe is another area of interest to me. Based on the price, one wouldn’t think a sapphire/lumed bezel would be possible, yet here it is. Sure, there’s a little play in the action, and perhaps the printing could be improved — but damnit, this is a $640 watch. 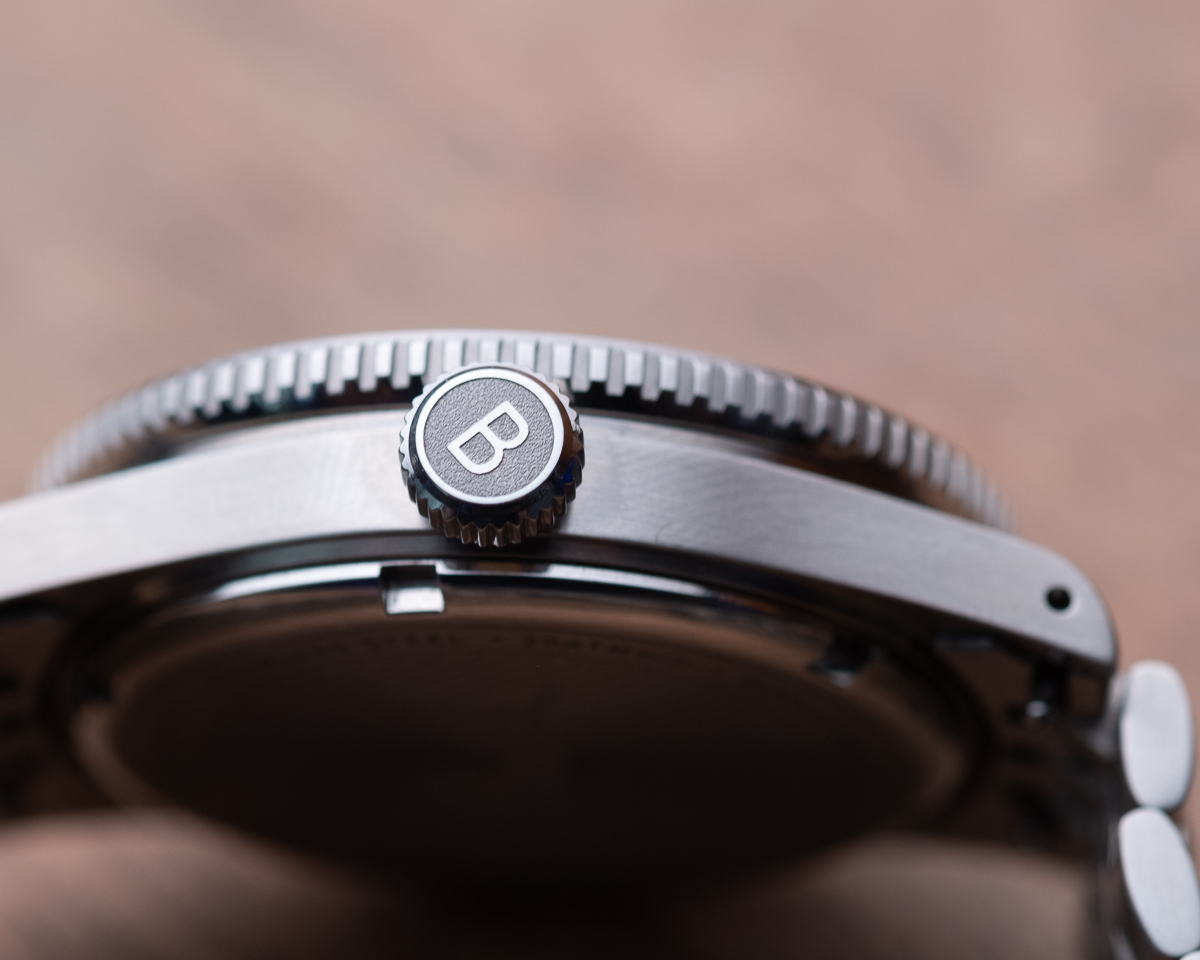 I really appreciate the sizing and styling on the crown as well. My calipers have it at a hair under 7mm, and it’s nicely textured for ease of use. It’s signed with Baltic’s big “B” set against a matte steel background. Always a nice touch, if you ask me. 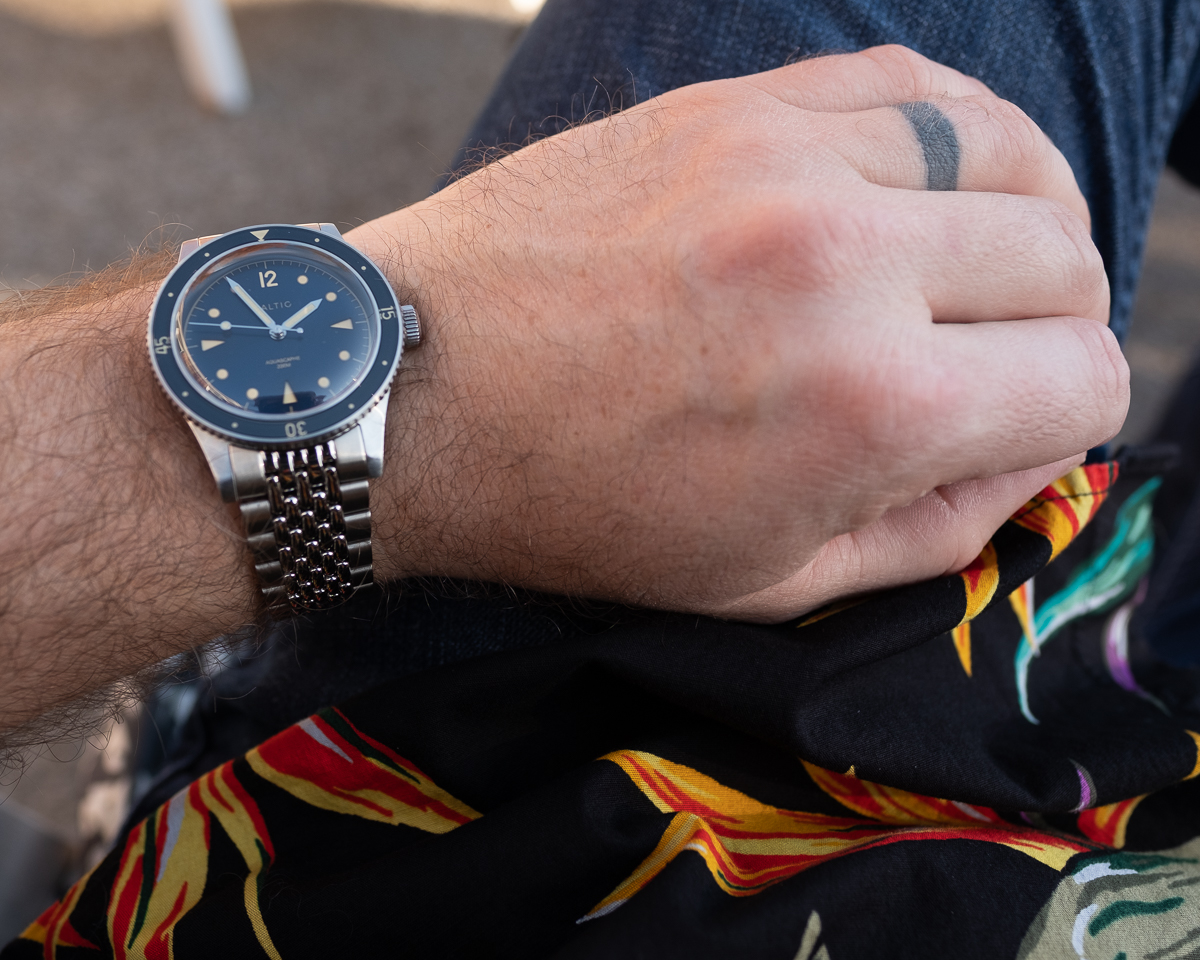 Now, I spoiled the lead a few sentences up. This watch costs just under $640 on a rubber strap… So, somewhere, some costs needed to be cut. One of the areas in which the brand chose to do this, I think, was in the selection of which movement to use. To be exceptionally clear here, I don’t think that Baltic sacrificed any level of function or quality. They simply chose to use a movement that doesn’t have the same eye-catching appeal as something like an ETA.

The Miyota 9039 is a 24-jewel, time-only movement that beats along at 28,800 BPH. I’ve had the opportunity to use the Miyota 90XX series movements several times in the past, and apart from a “wind-up-toy” feeling winding action, they’ve always performed well. In my experience, they keep better time than the -10s – +30s per day that’s considered in-spec for these movements.

I will say, however, give me a date — I always prefer a date on watches like this. I know it’s not a popular opinion, but my day job requires me to check the date somewhat frequently. My daily wearers always have it, or at least I notice when they do not. 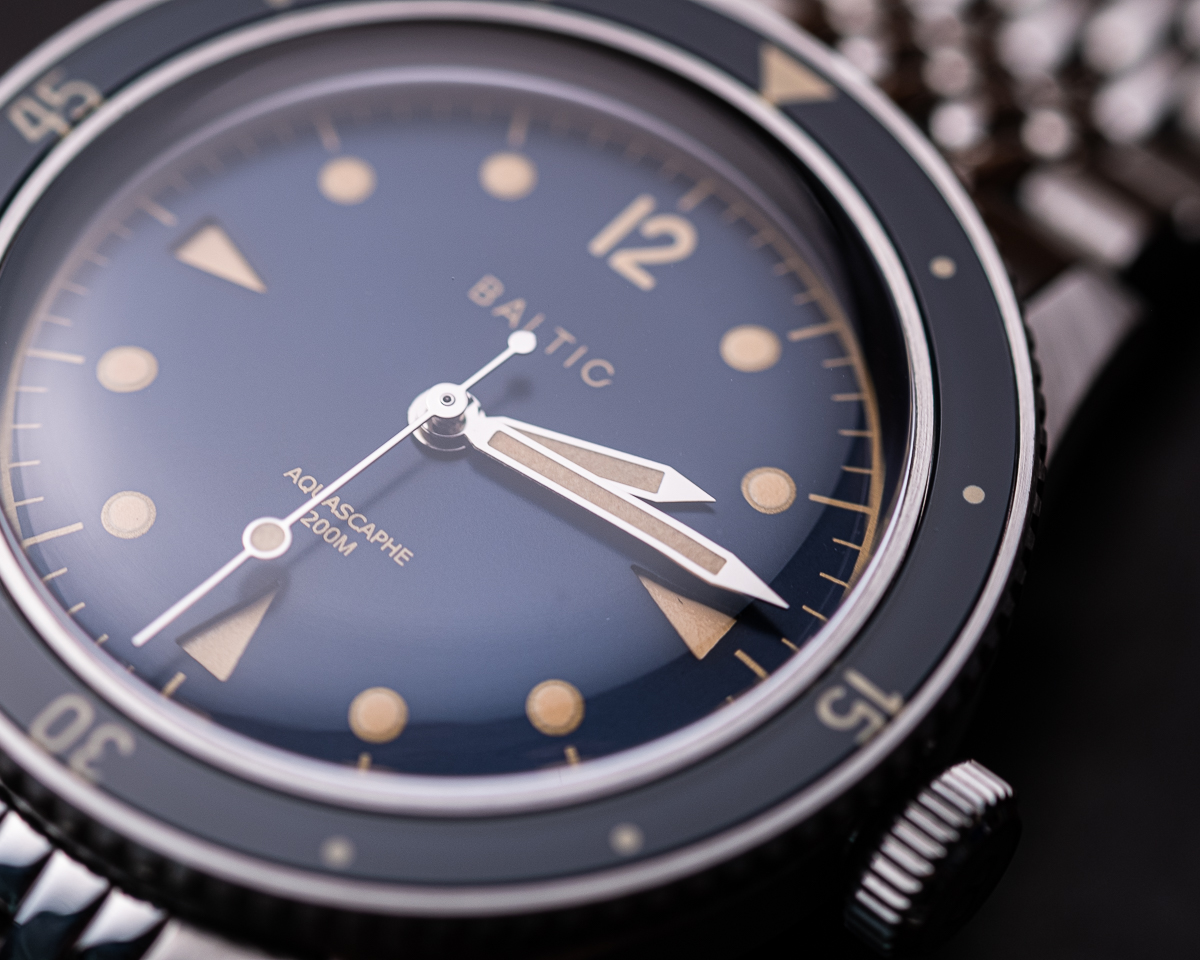 I remember when I saw my first pancake dial. I’m pretty sure it was on a PAM312 right after I’d bought a PAM that didn’t have one. This led me into a cycle of ring-around-the-rosie with Panerais until I wound up with one (a 312) that had a sandwich dial. This experience really showed me the power and appeal of a dial that has a physical dimension. This can be accomplished in a myriad of ways, with stepped subdials, recessed date windows, etc; but what Baltic chose to do here is simple and effective. The majority of the markers on the dial are painted with beige Super-LumiNova. However, the quarter-hour indices triangles are recessed with luminous material at the bottom. It’s subtle, but when you’re glancing at your wrist, you can just catch the hint of shadow and depth. I think it’s pretty slick, myself. 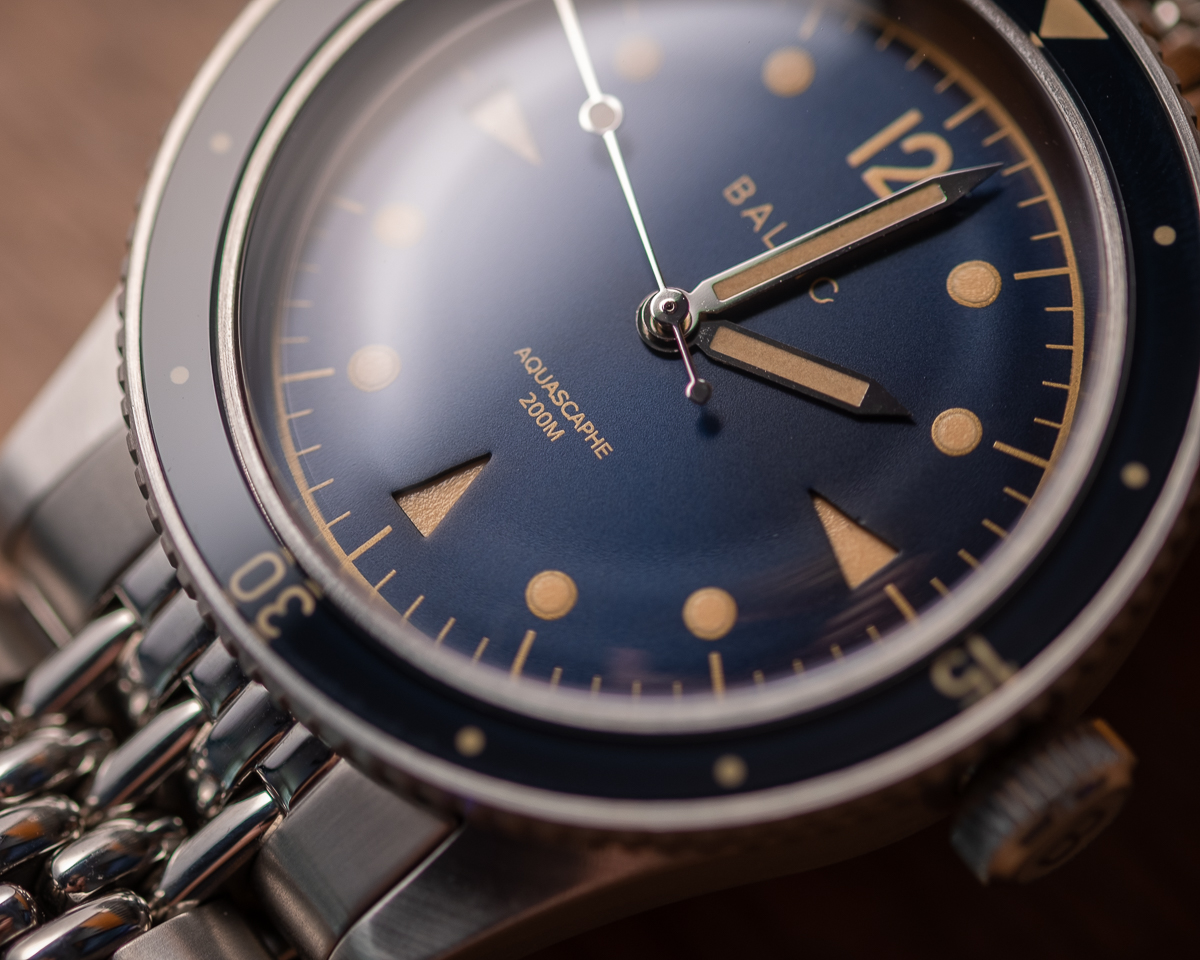 Moving on, the rest of the dial is somewhat self-explanatory. We have painted indices around the dial, sandwich indices at the quarter-hour, and a painted numeral 12 at noon. It’s worth pointing out that the markers on the bezel are also lumed. As I mentioned above, Baltic chose to use beige-colored Super-LumiNova (or faux patina, if you prefer). I believe this is true for the two “gilt” versions; however, they do offer a black and silver that appears to use pure white lume. In practical use, the lume performs fine — it’s not blazing bright, but it’s also not unreadable when you walk into a dark room. While adequate, I think this is an area that could have used a little more attention. Especially with the details present on the dial and bezel, I’d love to have some bright lume to admire.

As far as the handset used on the Aquascaphe, Baltic did well. Simple polished swords and an excellent lollipop seconds hand are traditional and effective. I can’t think of anything specific I’d change here. 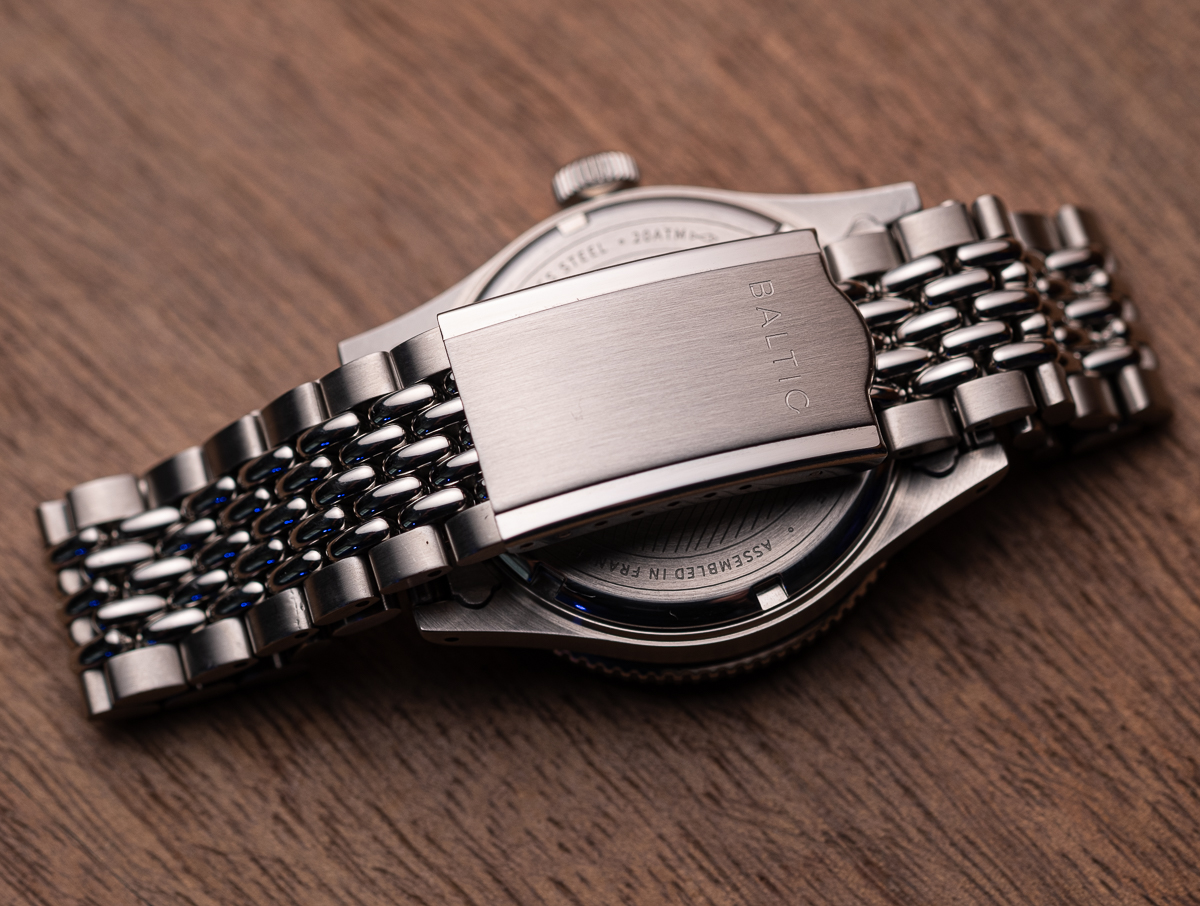 The Aquascaphe is available on two different 20mm strap options. A tropic style rubber strap and beads of rice bracelet. Both of these options are very nice.

The bracelet itself is a split-pin style construction with a friction clasp. Baltic has opted to use quick-release spring bars on the bracelet, so it makes rapid changes easy and fast. It does retain some of the “jangly” feel we’re familiar with from watches at this price point, but it doesn’t feel cheap in any sense. The clasp has a simple signature of “Baltic,” many micro-adjustment positions, and contrasting finishing to match the beads of rice. All in all, it’s excellent, and I’ve worn it a lot. 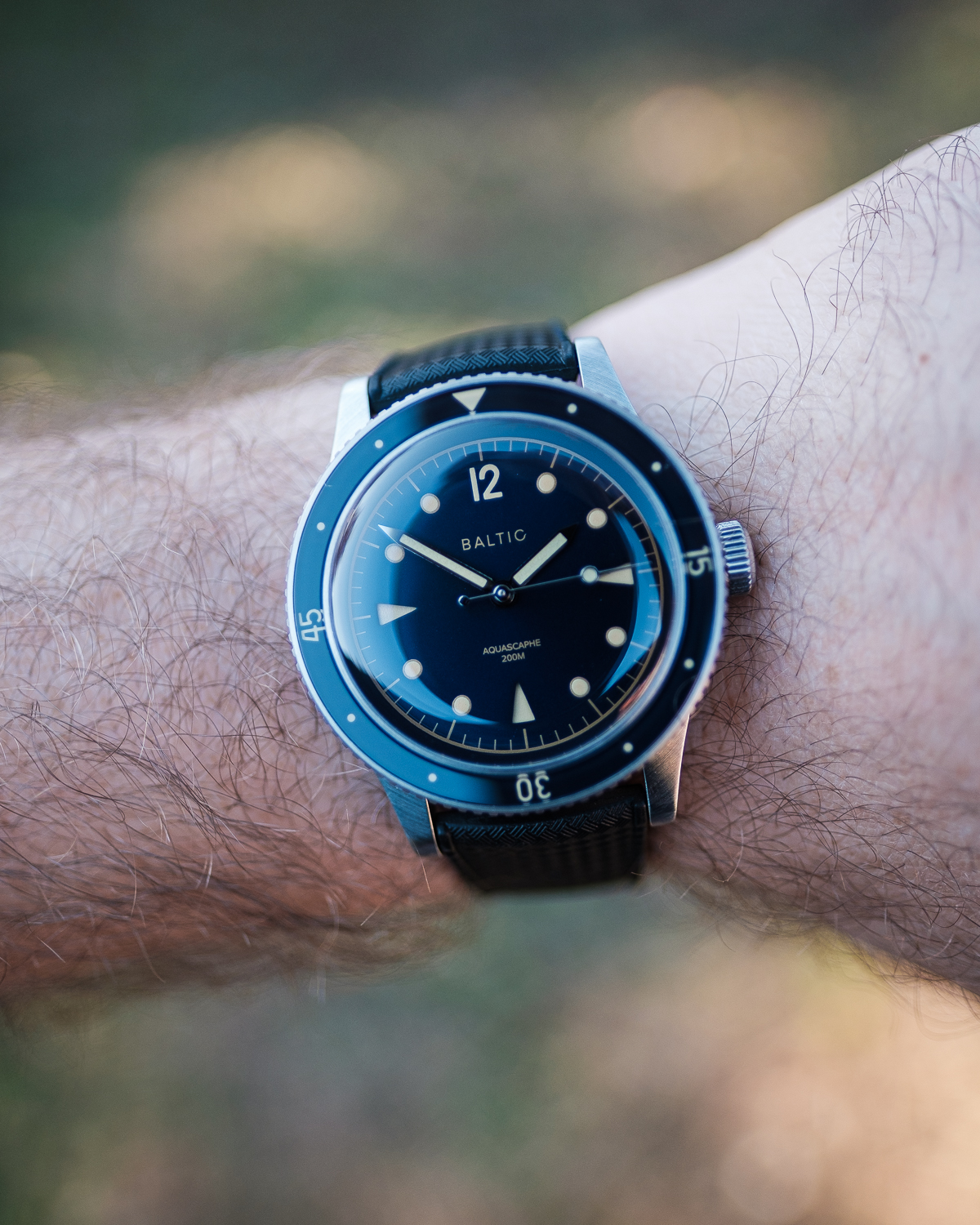 The rubber strap, as I mentioned above, is modeled after vintage Tropic-style straps. It’s vented on the bottom so your wrist can breath and the tail tapers in the way you’d expect from originals. The material is soft and pliable. This is something that most cheaper Tropic replicas are lacking.

I’ve worn the watch mostly on the bracelet, myself, but both strap options are attractive to me. I also think that the Aquascaphe would pair nicely on a navy NATO, should you get the urge. 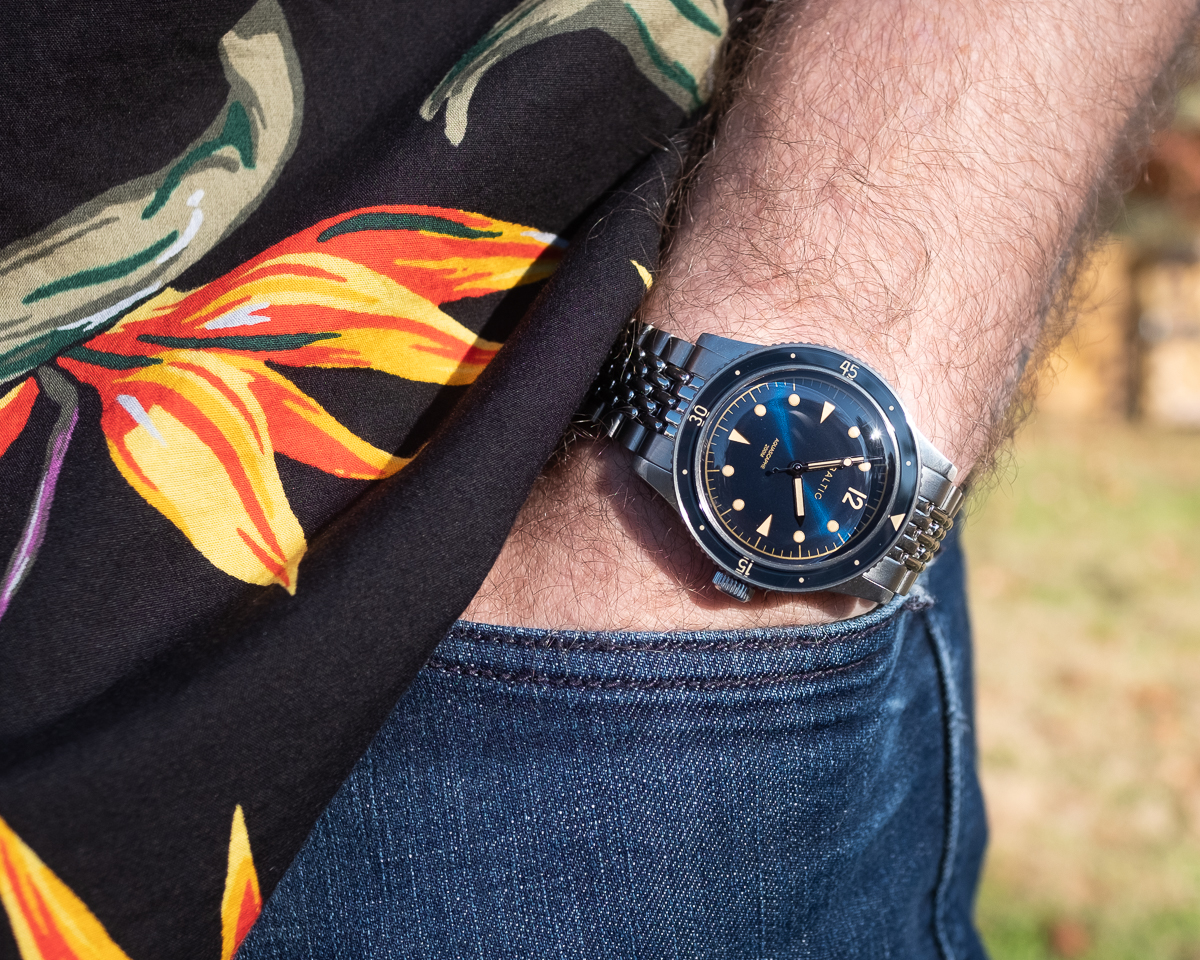 This watch wears like a champ. The case’s overall thickness comes in at roughly 12.75mm, which sits nicely on my wrist. The 47.3mm lug-to-lug width is nicely proportioned for my ~7” wrist. One of the most essential metrics for wristwatch comfort, in my eyes, is whether or not you can forget that you’re wearing a watch. The Baltic allows itself only to be noticed when you want to glance down and see the time, but you’re not constantly adjusting it on your wrist. That’s a valuable trait in a daily watch, in my opinion. 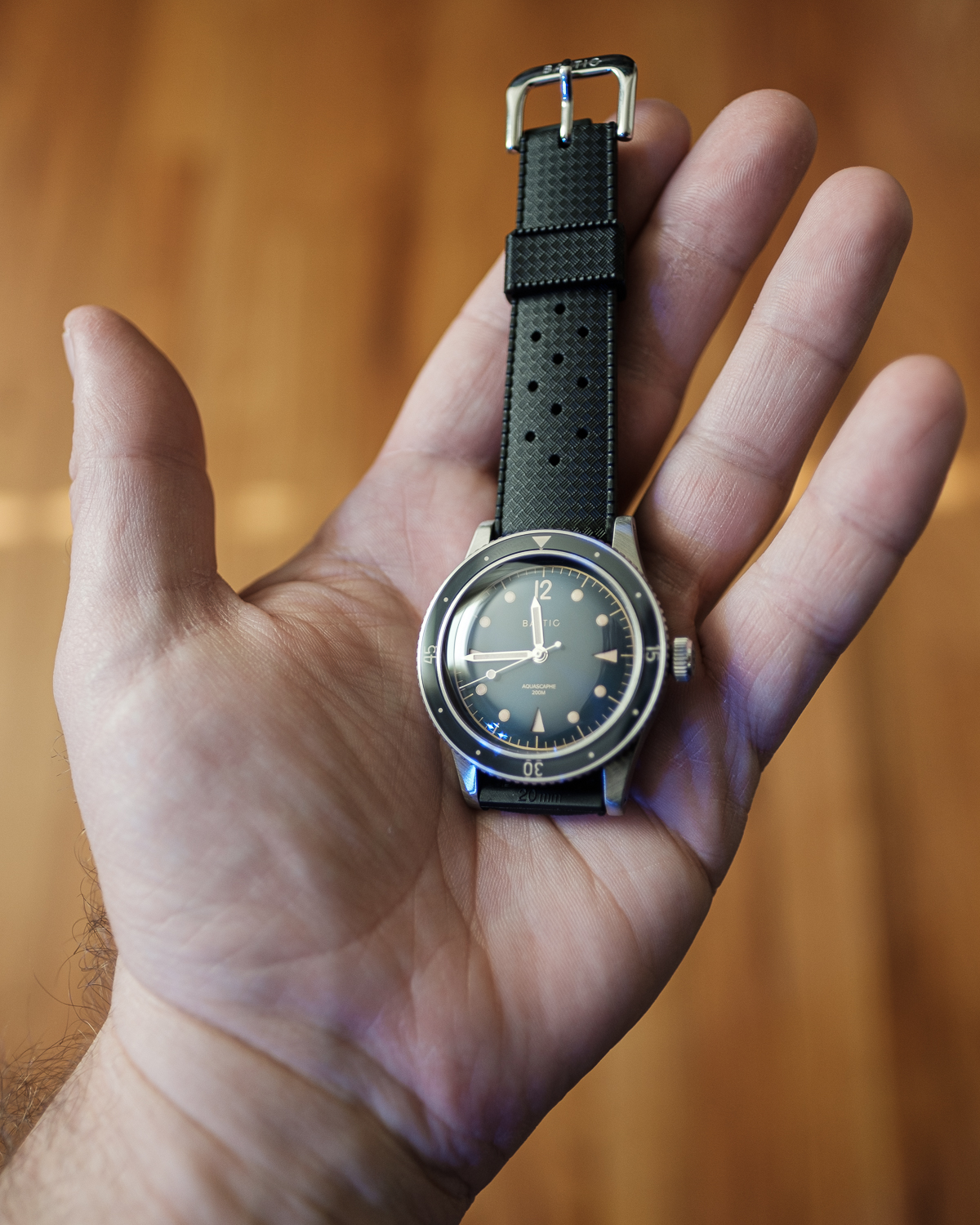 There are a couple of competitive options that jump straight to mind.

The first would be the Longines Legend’s Diver. The LLD offers roughly the same era of vintage styling but at a somewhat significantly higher price point. However, there are several upgrades you get for that higher price, including better lume and an ETA movement.

For a comparable microbrand, I’d take a look at the Nodus Retrospect. These run a couple of hundred dollars less than the Baltic and sport an NH35A movement. They still offer nice styling and an incredible value for the money. It will just come down to taste, preference, and budget.

Lastly, I think checking out the Zelos Mako watches would be a good comparison. They have a little more modern styling but retain a focus on materials and craftsmanship. Plus, you’ll get a Selitta movement instead of the Japanese Miyota. Depending on when you purchase it, these can be had for around the same price as the Baltic or slightly more. 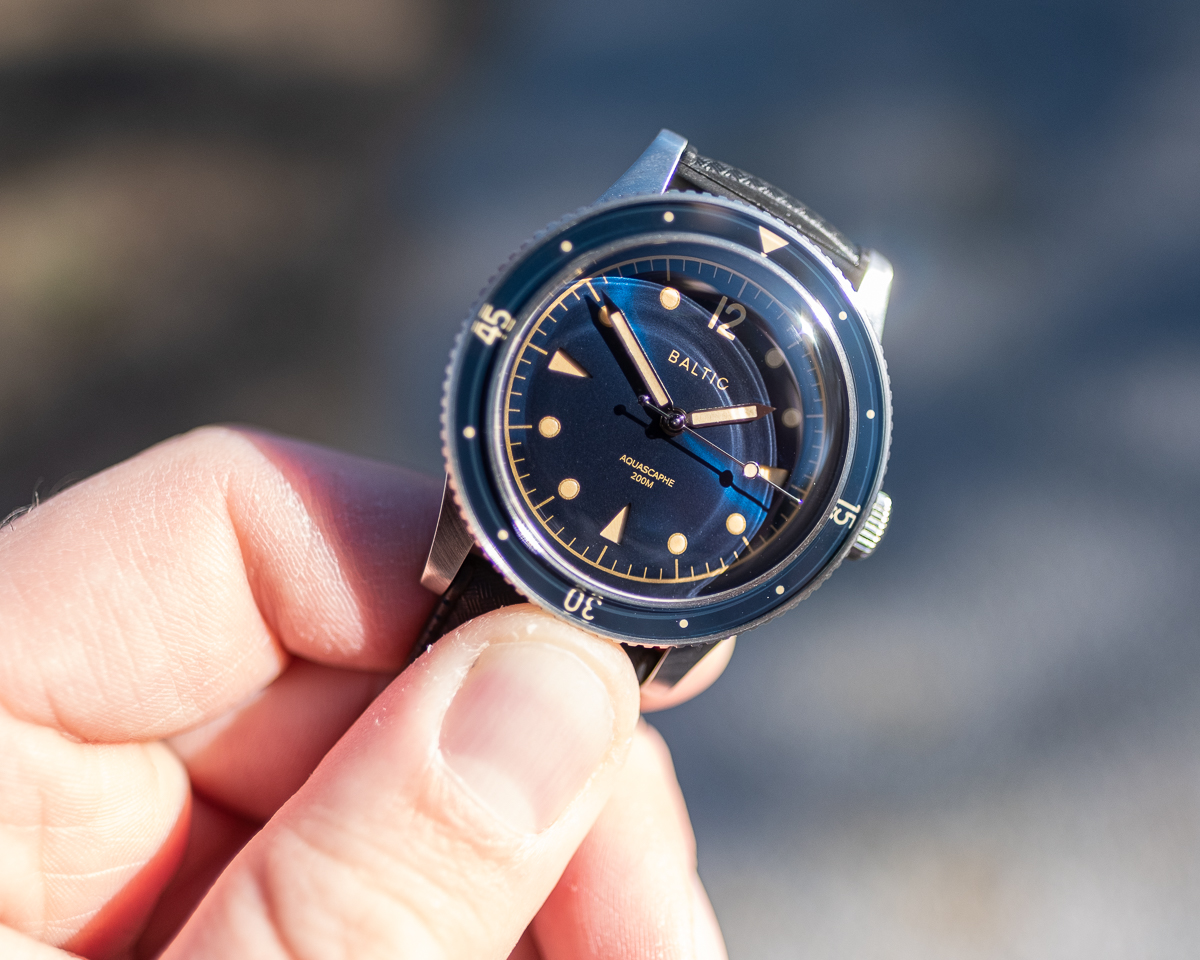 When it’s all said and done, I think that Baltic is doing some exciting things in the independent watchmaker landscape. The brand leans very heavily on the “vintage-inspired” trope, but I’m not sure that’s necessarily a bad thing. The Aquascaphe, in particular, offers an excellent entry point to a skin diver-inspired timepiece. It’s powered by a reliable Japanese movement, and it provides several layers of interest from the sapphire bezel to the sandwich dial. The Baltic Aquascaphes have been released in limited batches. Price is 579,17€ on rubber and 658,33€ on steel. You also have the option to purchase the watch with both for 687,50€. For additional details and information head on over to baltic-watches.com.

Necessary Data
>Brand: Baltic
>Model: Aquascaphe
>Price: 579,17€ on rubber, 658,33€ on bracelet, and 687,50€ for both
>Size: 39mm
>Would reviewer personally wear it: Yes, I’ve really enjoyed having this piece around.
>Friend we’d recommend it to first: This would be a great starter watch. Lots of value, plus tons of cool details.
>Best characteristic of watch: The sandwich dial!
>Worst characteristic of watch: The lume, so much potential here…