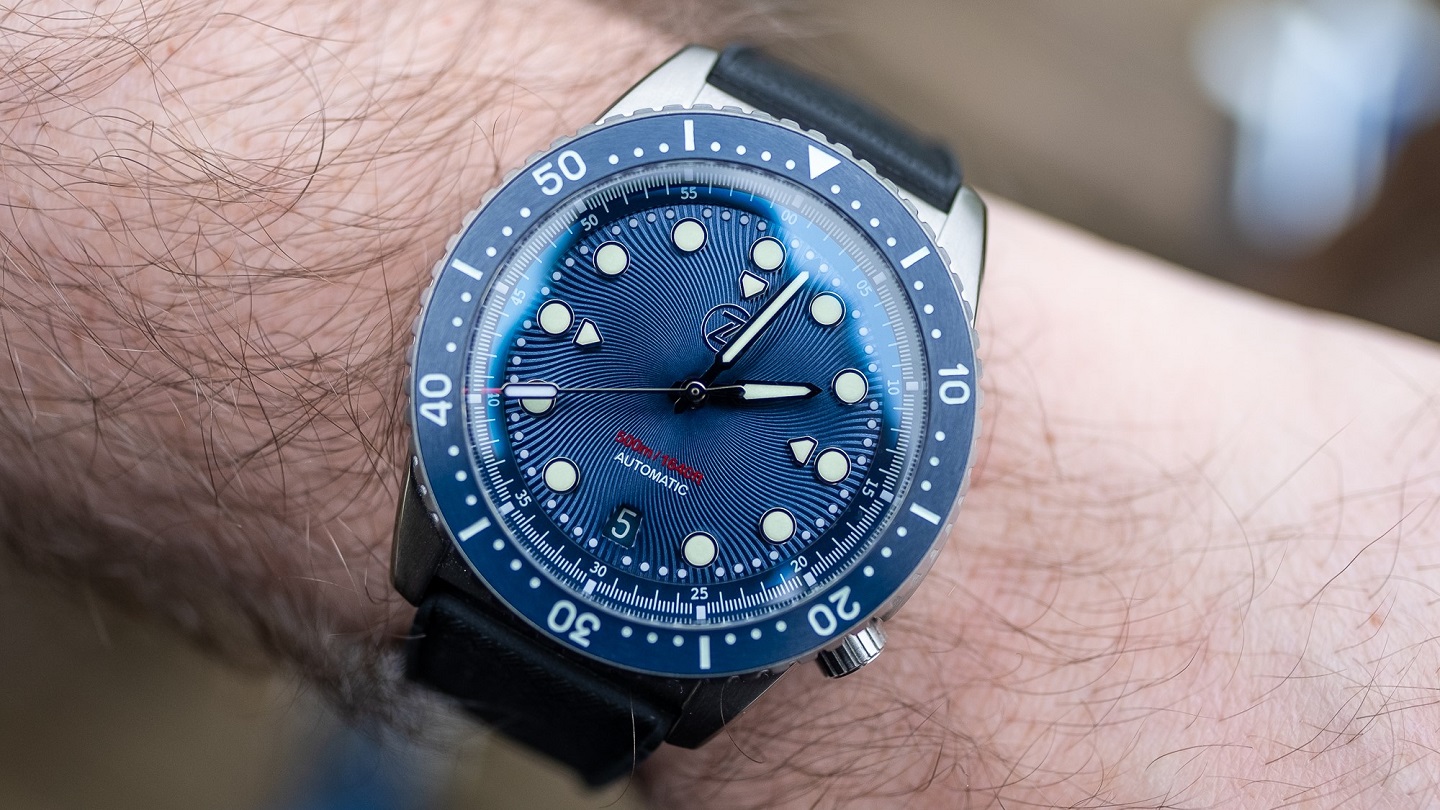 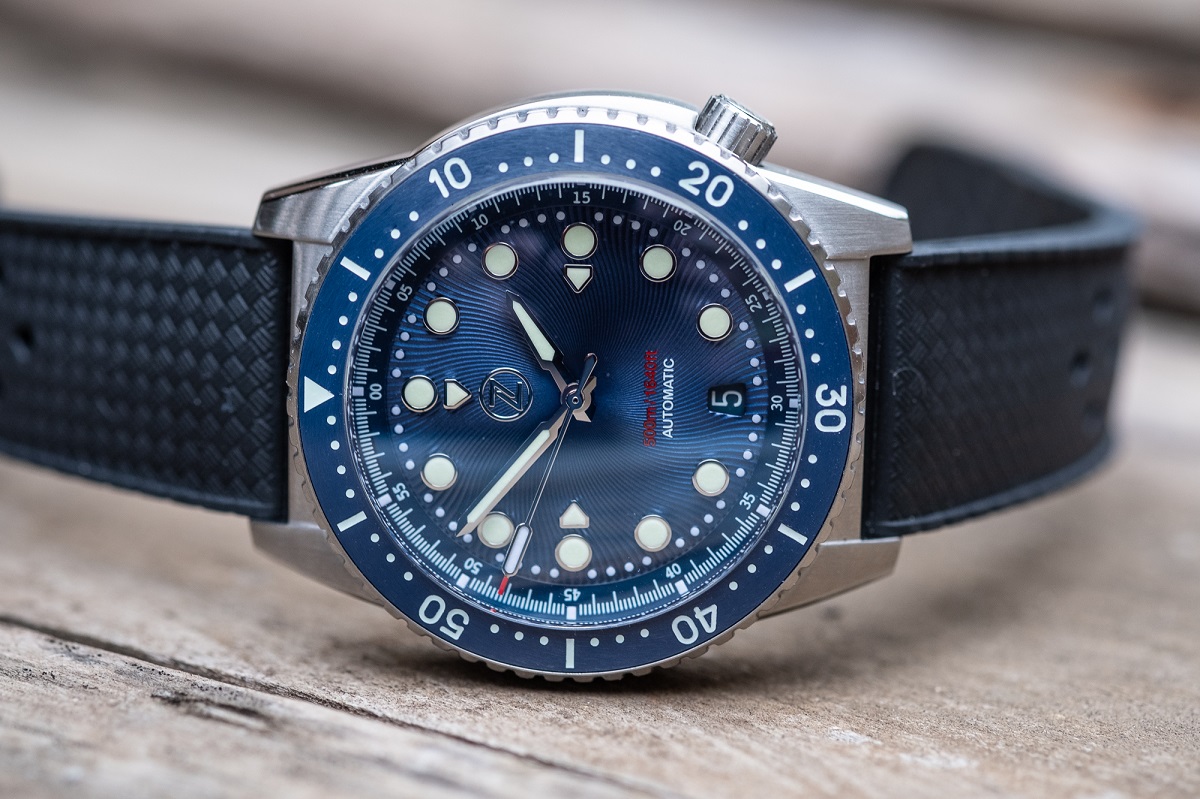 The sudden and prolific onslaught of microbrands in the watch world is a product of the ingenuity of independent designers that want to do their own thing. Utilizing platforms like Kickstarter and Gofundme, they gain the capital needed to create a product of impressive quality and reasonable price while appealing to a very wide audience. Zelos is a great example and they’re a Singapore-based watch company captained by Elshan Tang that focuses their design on utilizing special and unusual materials like Bronze, Carbon Fiber, and Meteorite. One of their recent releases – the Zelos Mako 500M Diver – is a perfect example of what a microbrand can produce when they really put their minds to it. 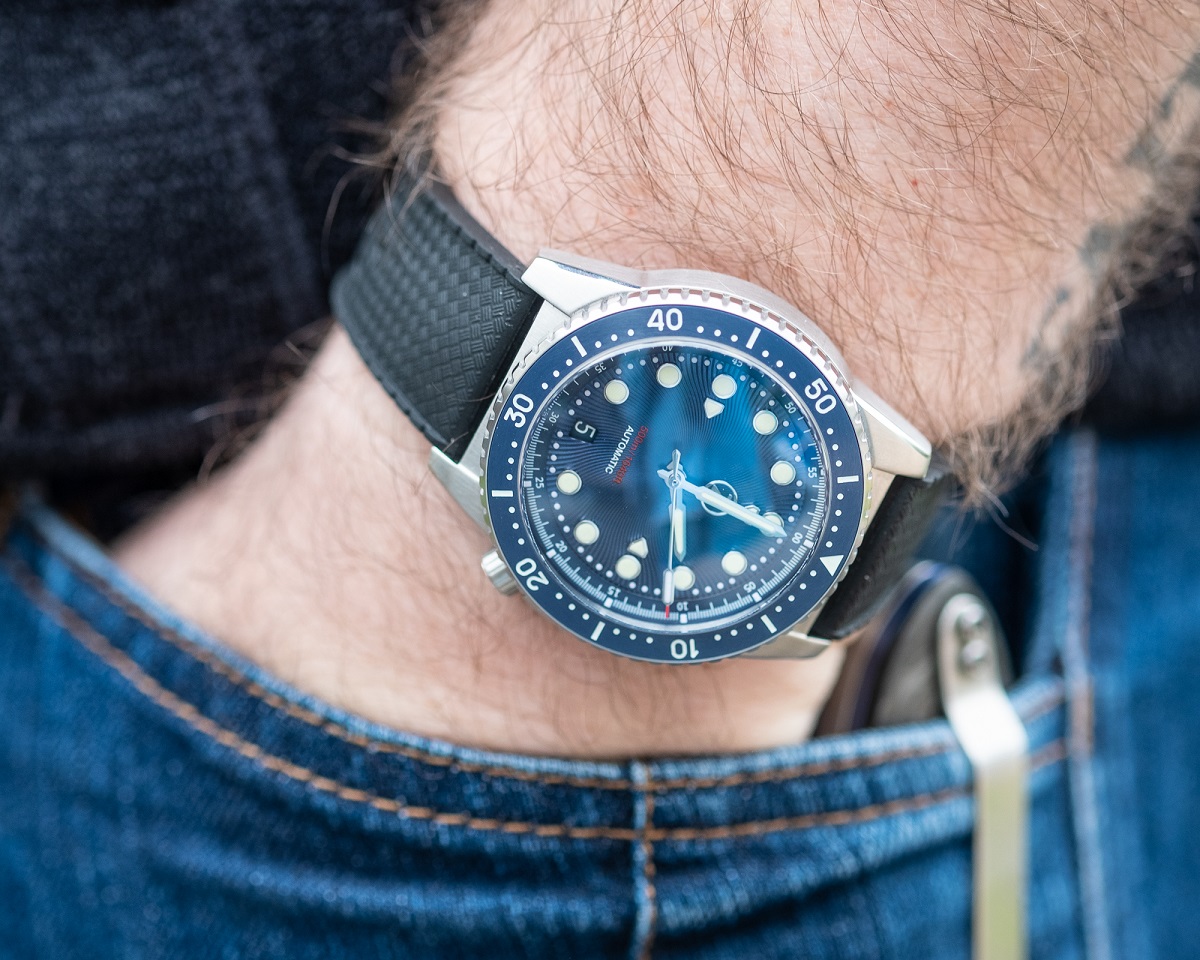 We’ve talked a lot about Zelos on aBlogtoWatch, the most recent being David’s wrist time review of the Hammerhead, which was well received. One of the things that David really focused on was the impressive casework and case materials (being that it was a bronze 1,000m dive watch for around $750). The case is also where the Mako first caught my eye, but for a different reason… I feel like I have a pretty good grasp on what areas of a watch will suffer when trying to come in at a certain budget. The case finishing is generally one and I’ll be the first to admit that I expected to be disappointed here – I couldn’t have been more wrong. The beautiful 40mm steel case on the Mako stands out in its price bracket. The sides of the steel case are delicately brushed, transitioning into polished bevels and the back to brushed steel on the top of the lugs. The case shape itself is vaguely reminiscent of the old Seiko 62MAS or the new 6rMAS reissue (SBDC051/3) with its straight and squared off lugs. The Mako measures 46.2mm lug to lug, with a thickness of 15mm including the boxed/domed sapphire crystal. These measurements all culminate into, what I think is a very wearable watch that does not feel “too large,” but has a stout wrist presence. 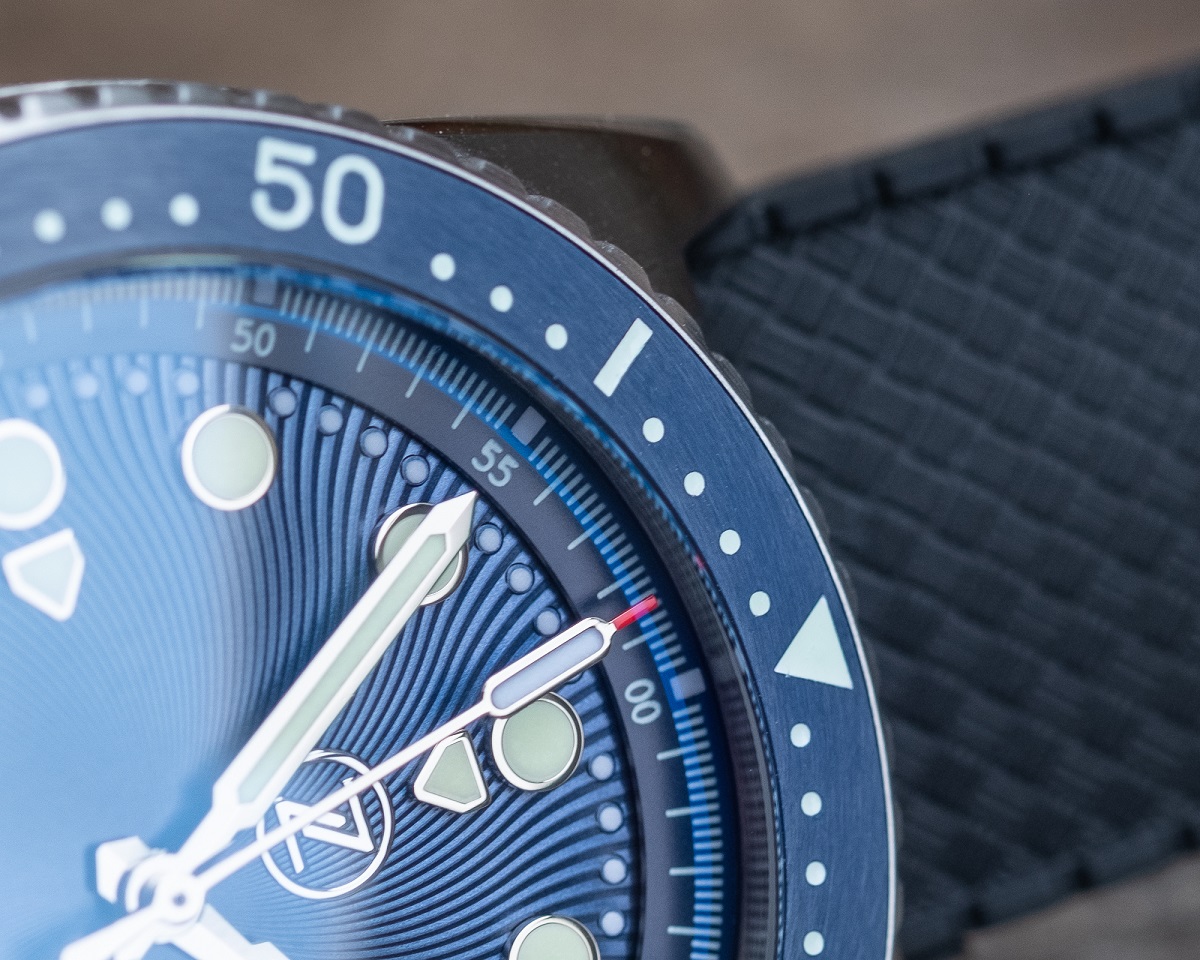 The bezel caps off this really impressive package. It’s a 120-click ceramic bezel that is fully lumed. That’s bananas to me. At the time of this review the Mako costs around $749 (more on the pricing later), and it includes a fully lumed ceramic bezel. I can’t think of a competitive option to that off the top of my head. Value aside, the bezel is a good one albeit a bit on the stiff side. It has a coarse styled coin edge that grips pretty well, although I find myself gripping it at 12 and 6 to turn it. 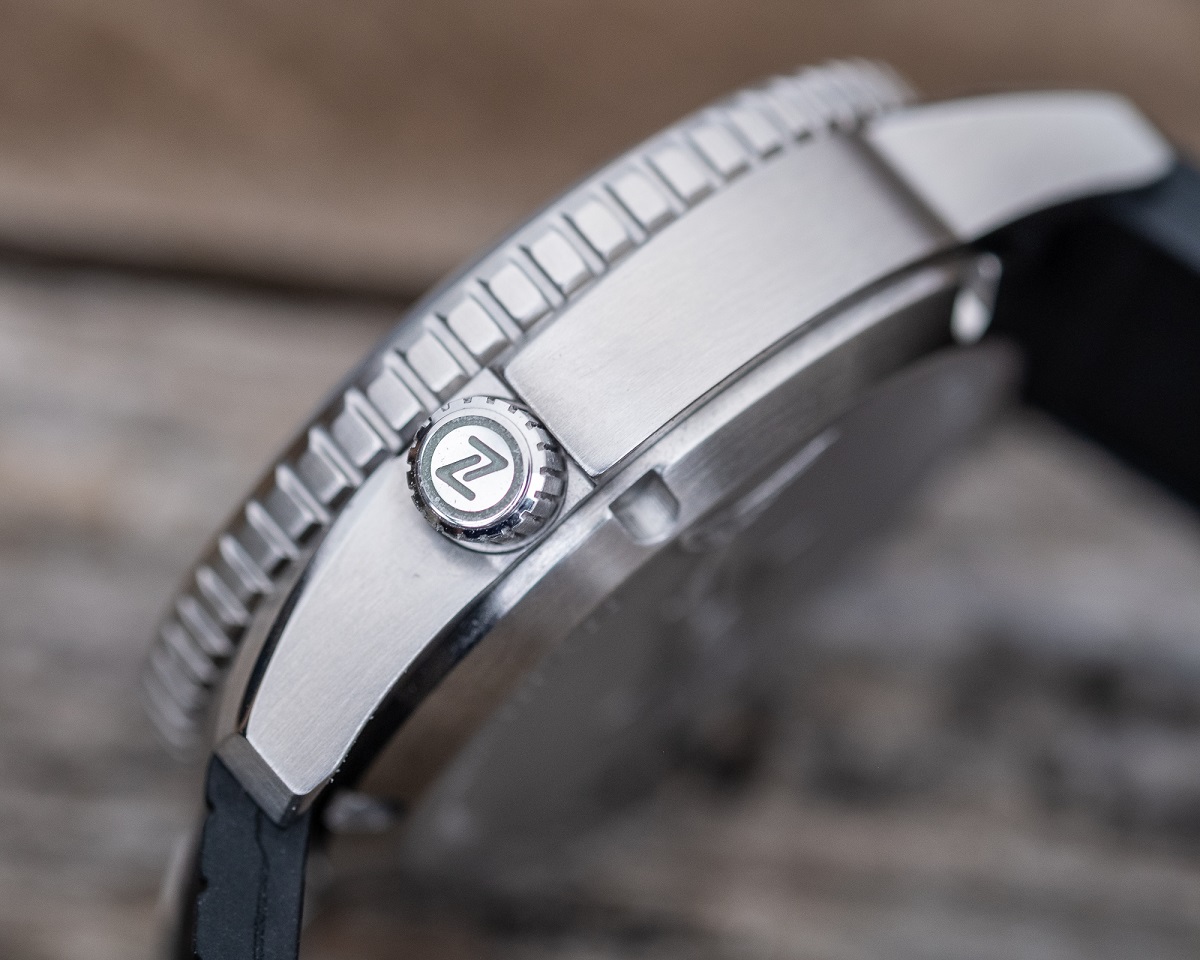 Lastly, the crown. This is the Achilles’ heel of the watch. The crown is roughly 5.4mm wide and a little difficult to grip. That can be problematic on a screw down crown because if you screw it down too tight, then it’s a pain to get it loose again. Another gripe about the crown is that after you’ve adjusted the time and you are screwing it back in, the winding mechanism does not disengage, so you are turning the crown with resistance as you tighten it down. I don’t know if that’s true of all Sellita movements, but it can make the crown a little unnecessarily “fidgety” and hard to deal with. Although in reality, you won’t be messing with the crown a lot. You’ll get it set and leave it set for the few days that you wear it before rotating it out. One last little footnote regarding the crown that I did not notice till the writing of this article: the brand logo engraving in the crown is filled with lume, kind of a cool little touch. 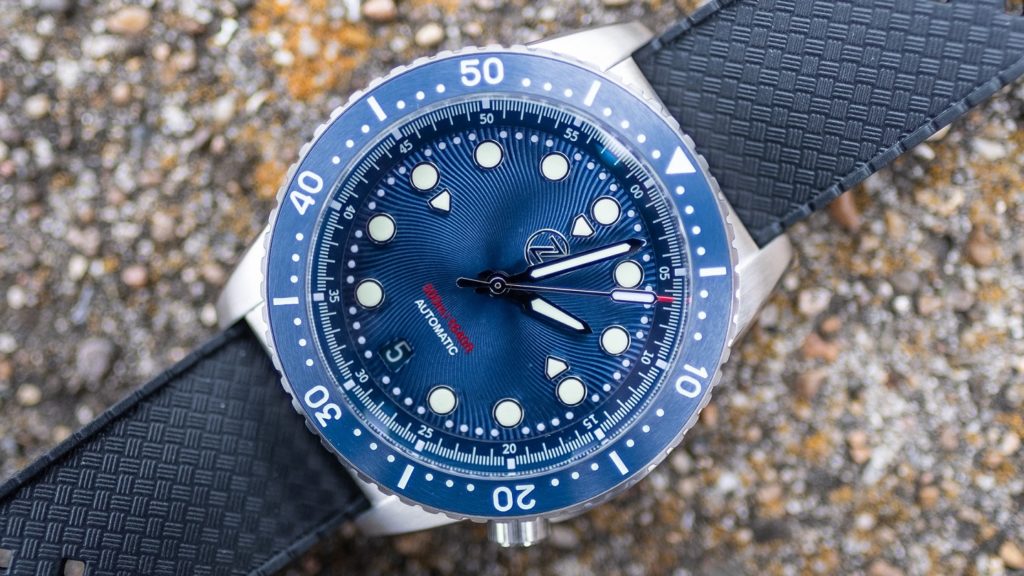 The Zelos Mako uses a boxed Sapphire Crystal that may have a degree of anti-reflective coatings, but it’s not overtly apparent. The boxed or raised design of the crystal, however, does lend itself to a vintage-y feel when you first pick up and handle the watch. I’ve always been attracted to raised/domed/boxed crystals like this and I think that Zelos pulled it off well. 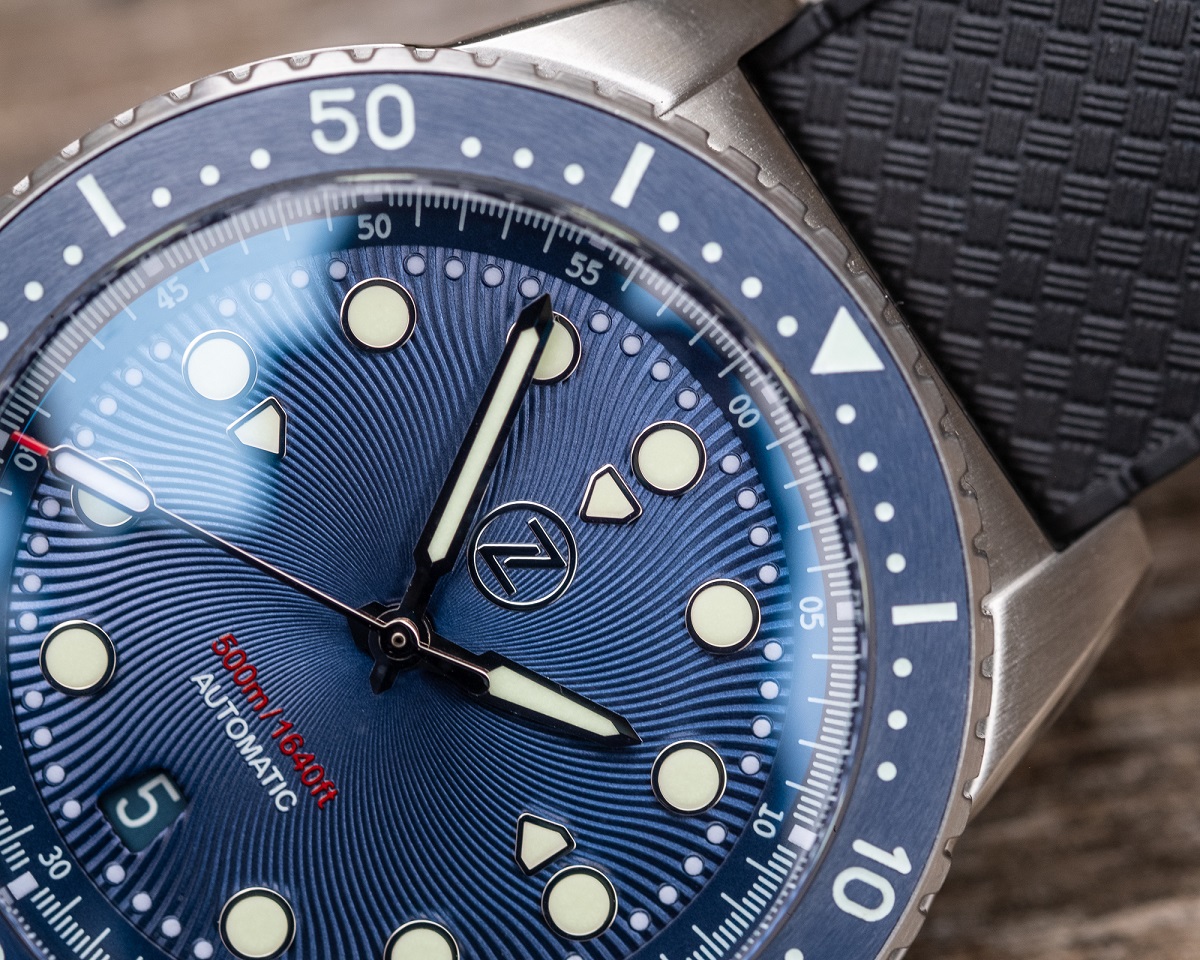 Next, the dial itself – Zelos used a radial wavy texturing on their dials. It gives the watch a bit of a sunburst effect as well that showcases the dial color very well. Zelos’ logo sits proudly and polished at noon with the depth rating printed in red at 6 o’clock over white “Automatic” text. In addition to the branding and logo, there is a minute track running along the chapter ring, in white, that counts off the 5-minutes at each marker. I think to briefly summarize the dial printing, it seems like a lot, especially with the chapter ring details as well. There are separate minute markers between each of the hour indices, and I think that would have sufficed. Speaking of the indices, they are applied and polished (I assume) steel. There are double markers at the 12, 3, and 9 o’clock positions – I’m a little undecided about the extra indices, but they are well done in any regard. The hour markers really catch the light and class up the watch. Zelos did a great job here in general. The lume is well done, with those larger markers being filled with green C3 Super-LumiNova. The hour and minute hands are sword/spear styled with generous lume plots running down their centers – they are also faceted, giving them a lot of movement as the watch catches the light. The seconds hand has a large “lume lozenge” at the end, and the very end of the hand is tipped in red to match the dial printing. At 6 o’clock sits the trapezoidal date window (I love a date at six) and this is executed very well, with the numeral filling the window, and being nicely centered. The date wheel matches the dial, and the numeral itself is white, keeping the added complication tasteful. 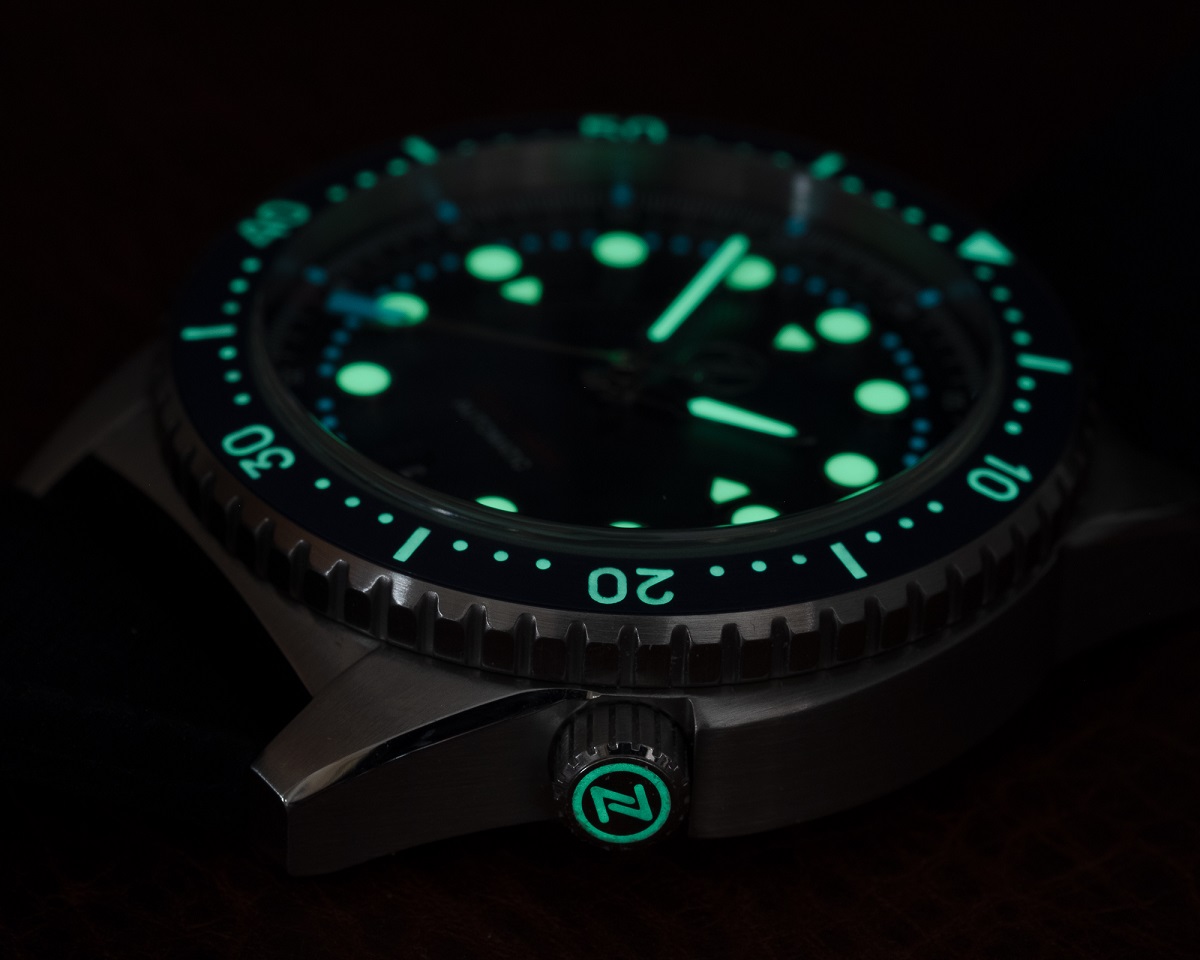 Zelos has historically used a variety of movements, from Seiko and Citizen Japanese made automatics to Swiss ETA and Sellita movements. If I had to guess, I would assume this is largely due to keeping costs at a particular point, but also availability at the time of design/manufacture. The Mako has the Swiss Sellita SW200 in it. So as to not beat a dead horse deader, I will simply state that in my experience I have found these movements to be quite reliable and stable motors for my watches. I wouldn’t change anything here. 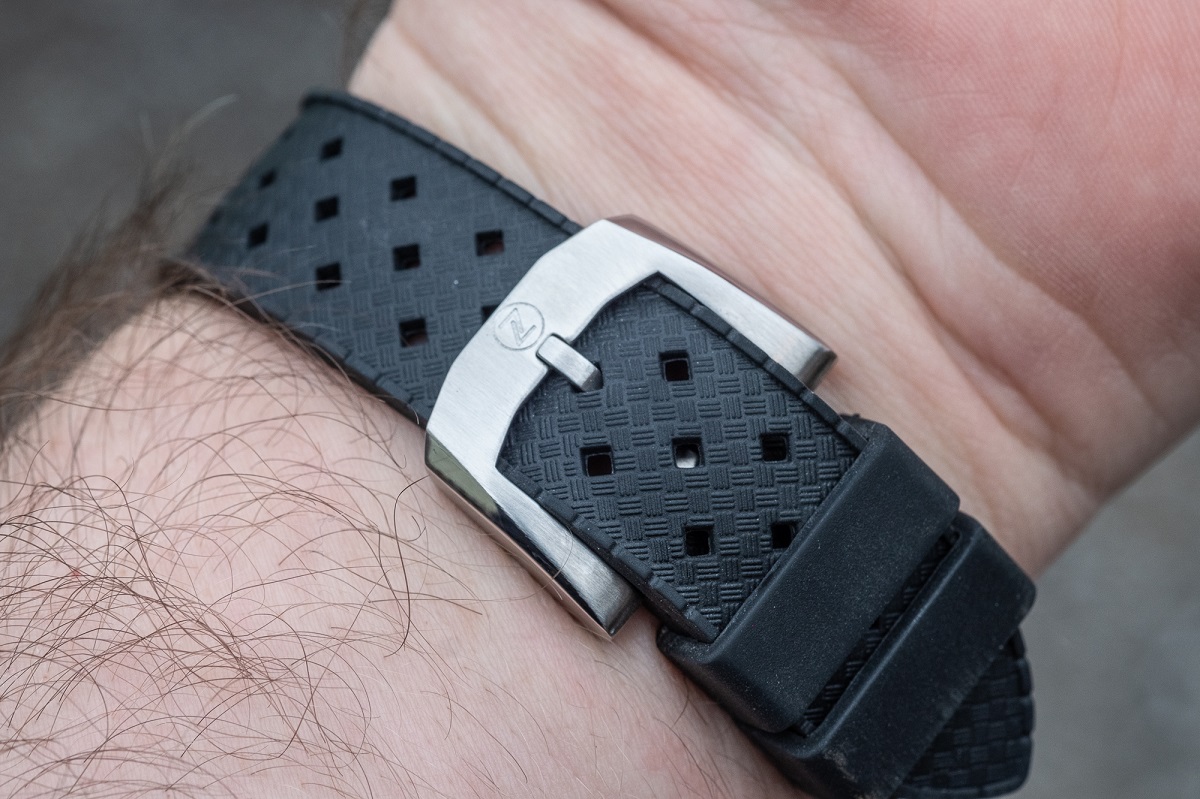 The Mako comes packaged with two OEM straps, one a tropic styled rubber strap, and the other a leather strap (only one buckle for both straps). The rubber strap is excellent, supple, and nicely detailed with the traditional “tropic” aesthetic. However, the leather strap leaves a bit to be desired, being stiff and cheaply made. The buckle is excellent however, mirroring the same polished bevels and brushing as the case. I am extremely pleased with the watch on rubber, but I have written off the leather entirely. 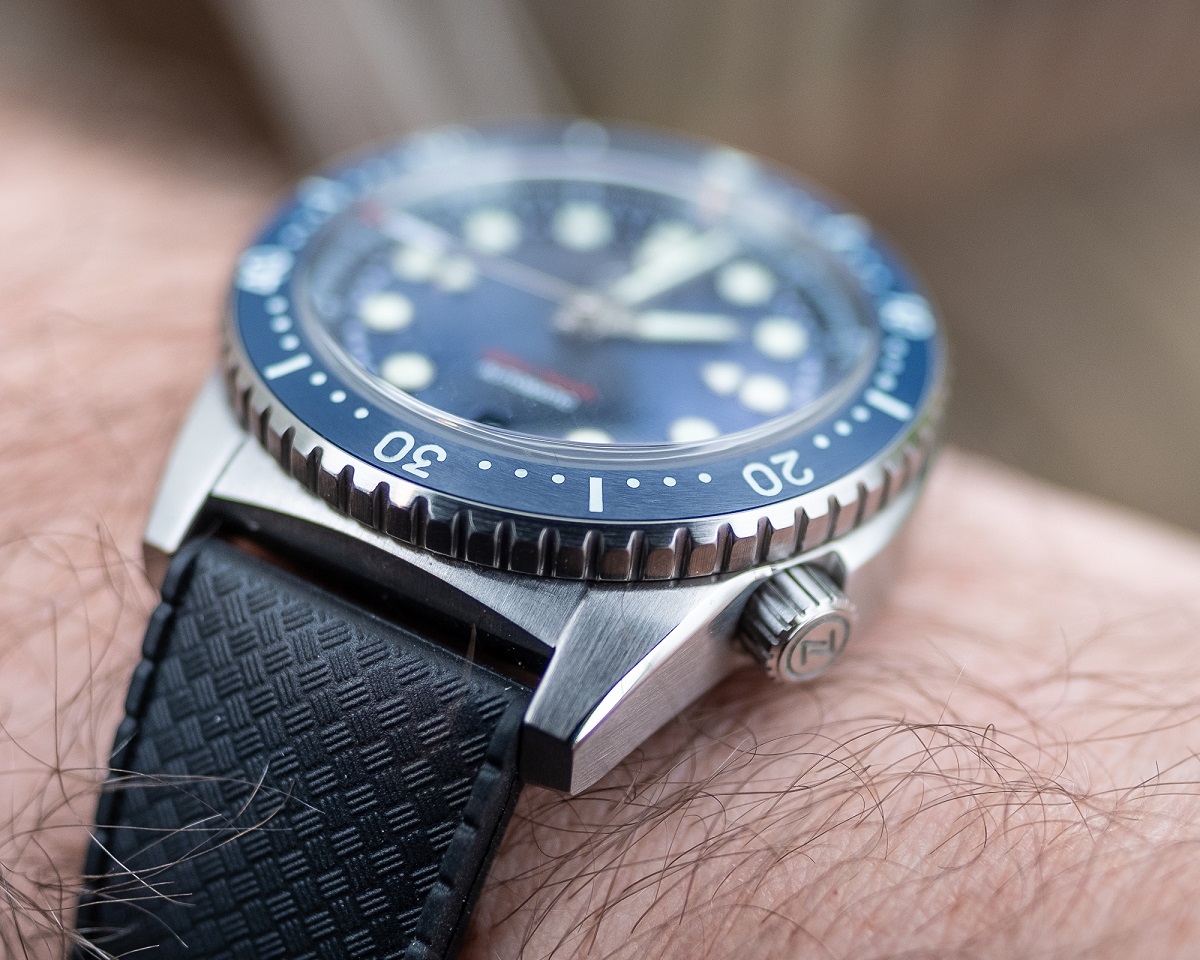 Before I summarize my thoughts on the Zelos in general, I wanted to touch on their pricing model. When this watch started out it could be had for $399 and then with each successive batch sell-out, the price went up, topping out at $749. I think that $399 is decidedly too cheap for a watch of this quality, and $749 a bit too high. I also think that the scaling price adds some confusion/pressure to the buying process that is unnecessary. This is a good product. I believe it should be priced at what it’s worth, and it will perform as it should. 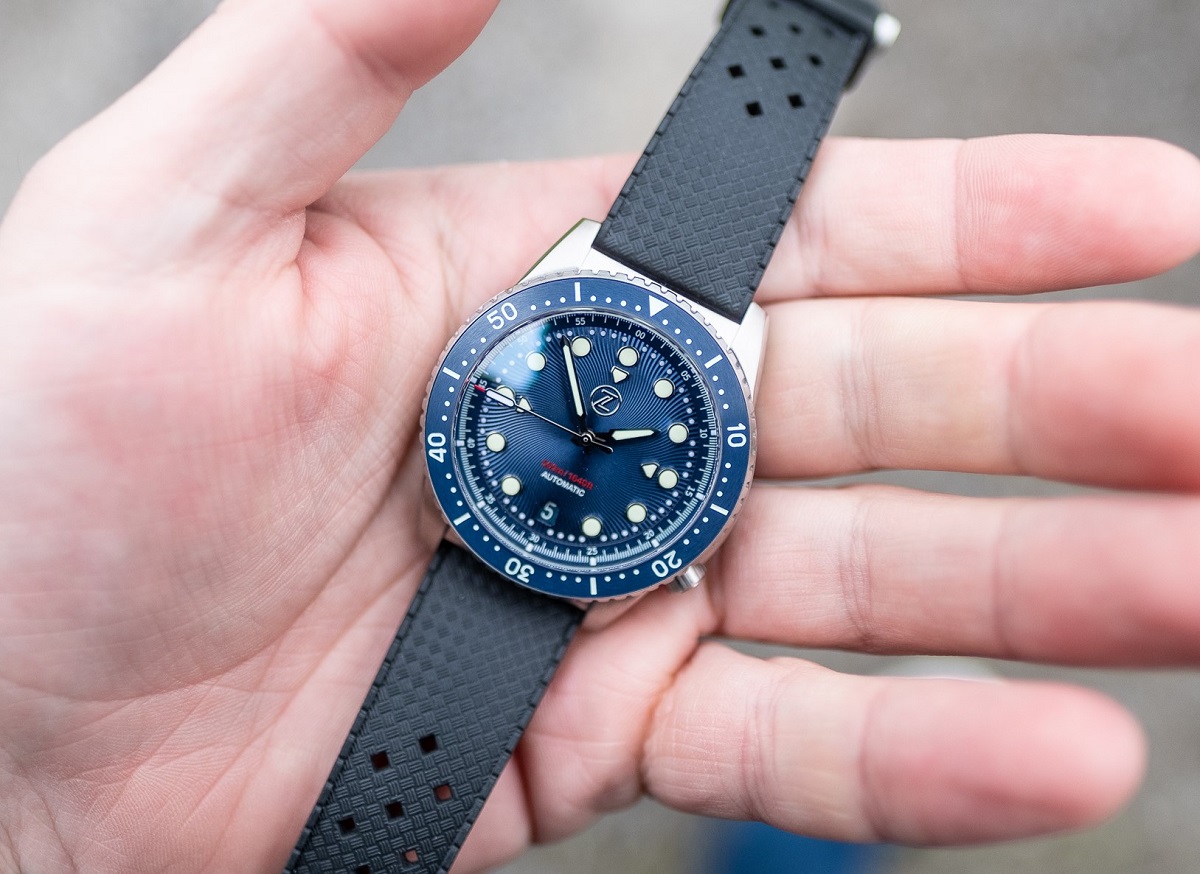 That said, I think the Zelos Mako 500M Diver is an excellent example of a well-executed microbrand offering. It has great lume, a nicely detailed dial, and very pleasing case finishing – all backed up by a reliable movement and an over-the-top depth rating. The Zelos Mako 500M Diver is available now, in all colors except the blue, for $749 and then a special meteorite dial for $949. zeloswatches.com