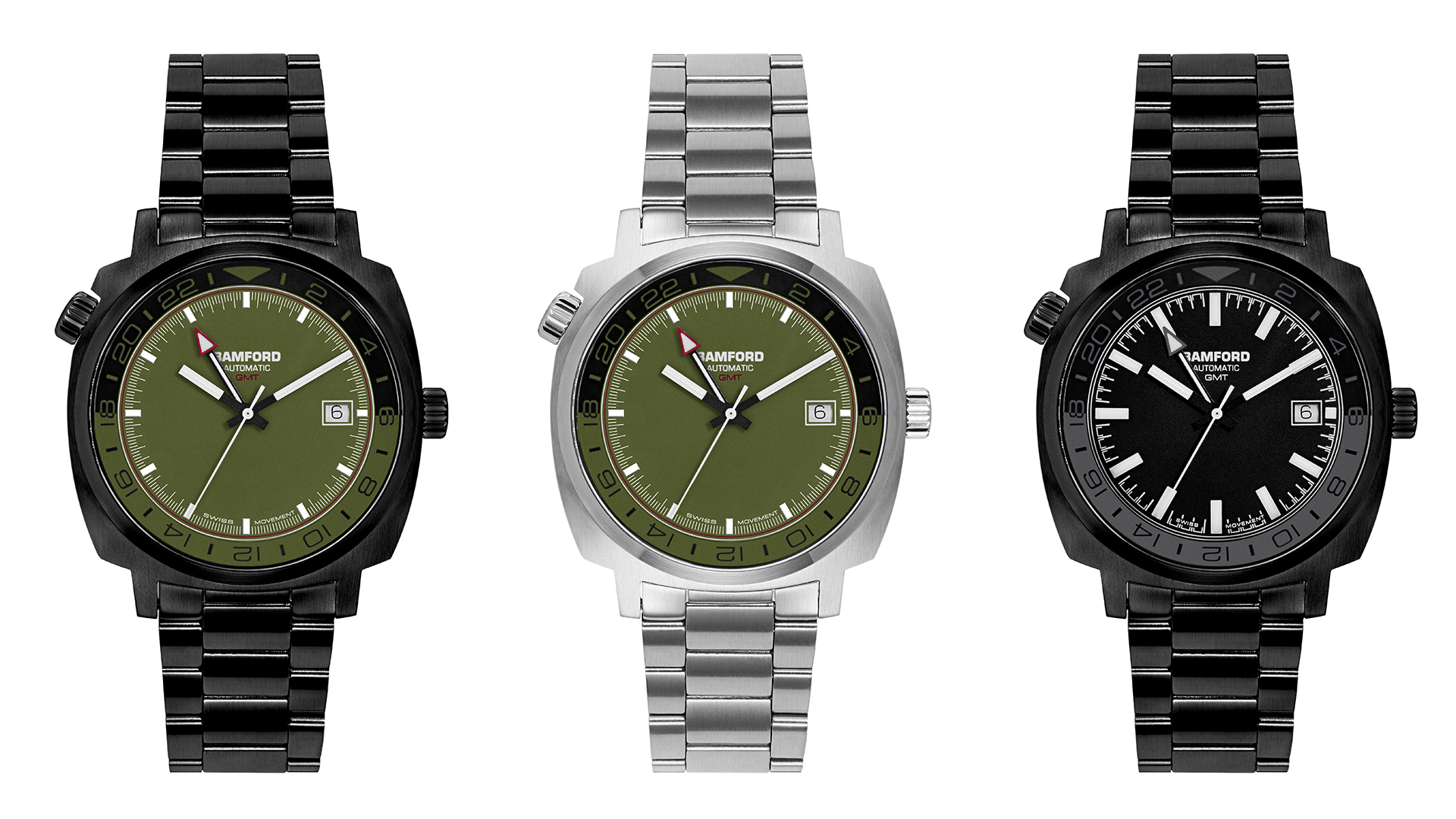 While Bamford has made a name for itself as a high-end customizer of timepieces for many years, it wasn’t until 2017 that the brand first made a watch of its own. The follow-up Bamford London GMT, introduced in 2019, brought some of the brand’s edgy signature style into a more affordable price bracket, and now for 2020 Bamford has announced two new variants of the London GMT design. The first of these, the Bamford London Commando GMT, adds a military edge with an olive drab dial, while the Bamford London Predator GMT takes things in a stealthy direction with a black and gray monochrome approach. 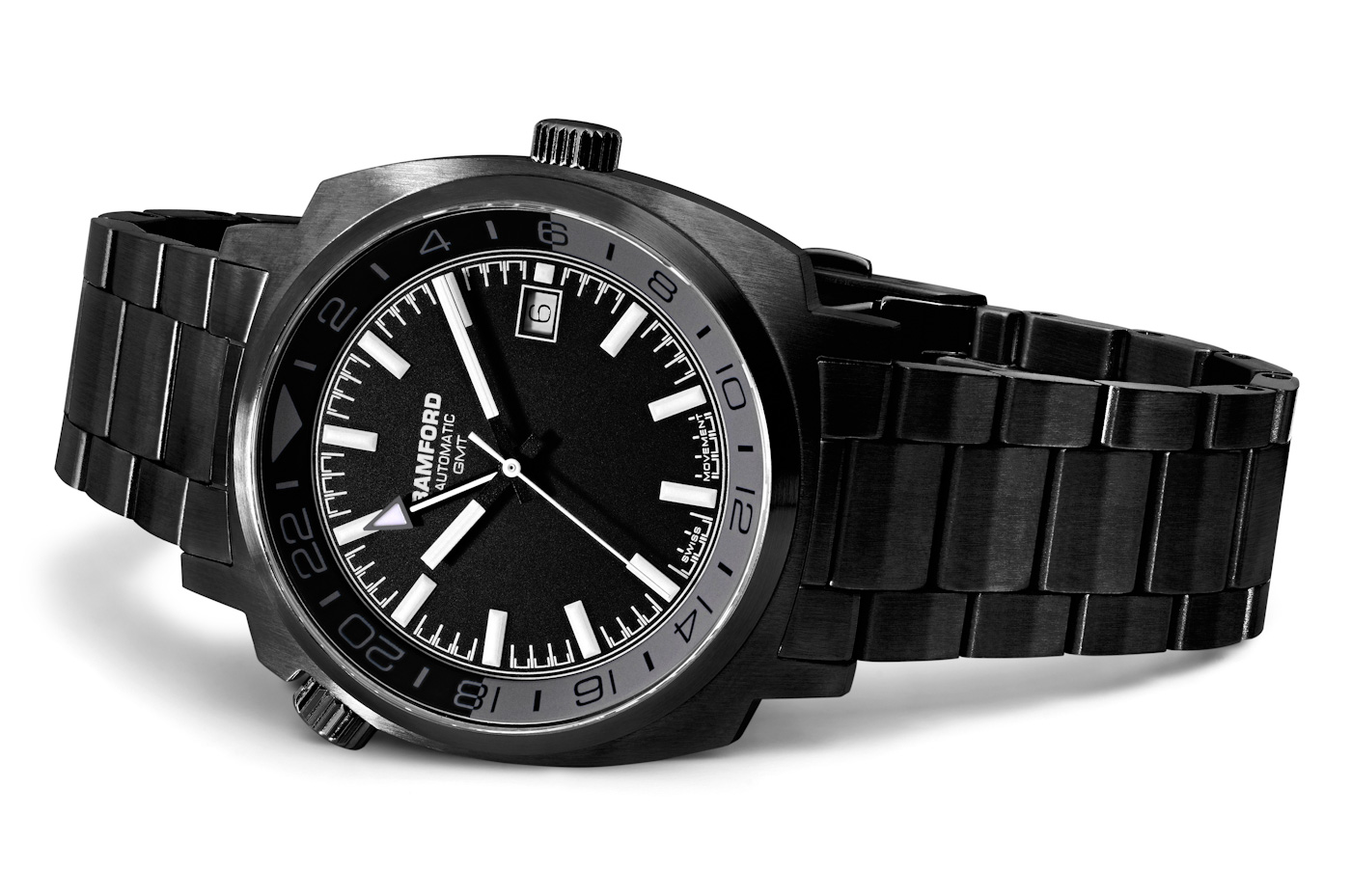 Both the Commando GMT and the Predator GMT start with a late ‘60s style 40 mm stainless steel cushion case. The retro vibe extends to the vertical brushing running the length of the case as well as the 10 o’clock crown for the internal bezel, but in true Bamford style there’s a modern edge to these that works to undermine some of the vintage associations. The Bamford London Predator GMT adds a tactical black coating to the design that leads to a much more custom feel, where the Commando GMT can be optioned with either black or brushed steel finishes for something a bit more traditional. The case offers 100 meters of water resistance, but as a design with diving roots it would be more satisfying to see a 200 meter rating. 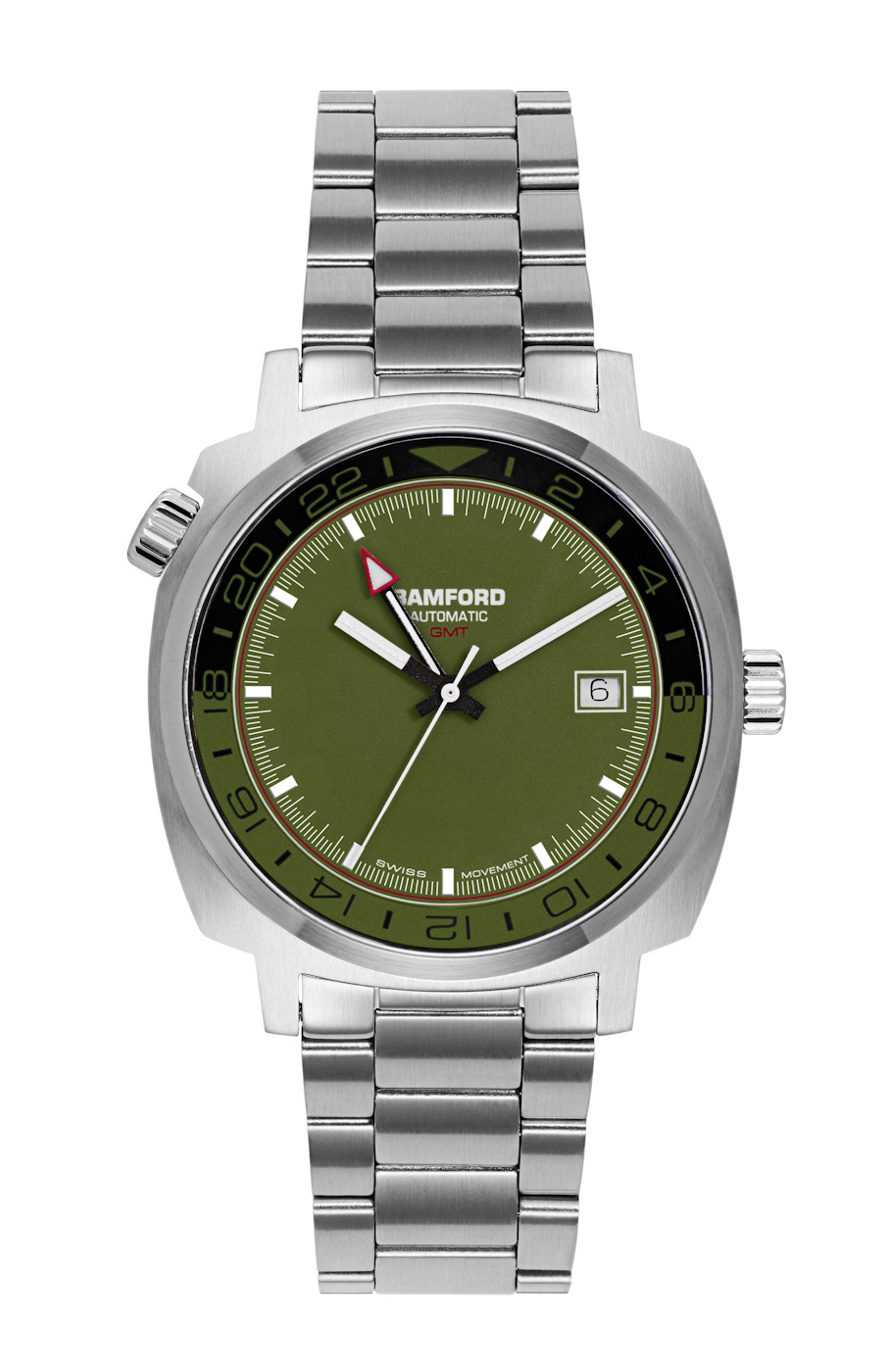 While the cases of the Bamford London Commando GMT and Bamford London Predator GMT ride a line between vintage and modern in style, the dials of these two models feel contemporary, clean, and brutally simple. The handset is a perfect example of this, with minimalist lumed sticks for the hours and minutes coupled to an elemental arrow GMT hand. From here, the two models diverge. The Commando GMT opts for rather undersized rectangular applied hour indices, and a pop of red on the GMT hand that ties into a red border around the dial. While the hands and indices feel a bit visually unbalanced in terms of size, the use of red sets off the matte olive drab of the main dial well to create some military-flavored contrast. For the Predator GMT, the indices are longer, bolder, and coupled to a “toothed” seconds track for a much more modern and aggressive overall look that balances the visual weight of the dial far more deftly. The Predator GMT also keeps the monochrome style of the case going, with the dial colored entirely in black, white, and medium gray. Both models share the same internal rotating two tone GMT bezel, with its sporty Omega-inflected numerals. For the Commando GMT, this is offered in olive drab and black, while the monochrome Predator GMT opts for black and medium gray. 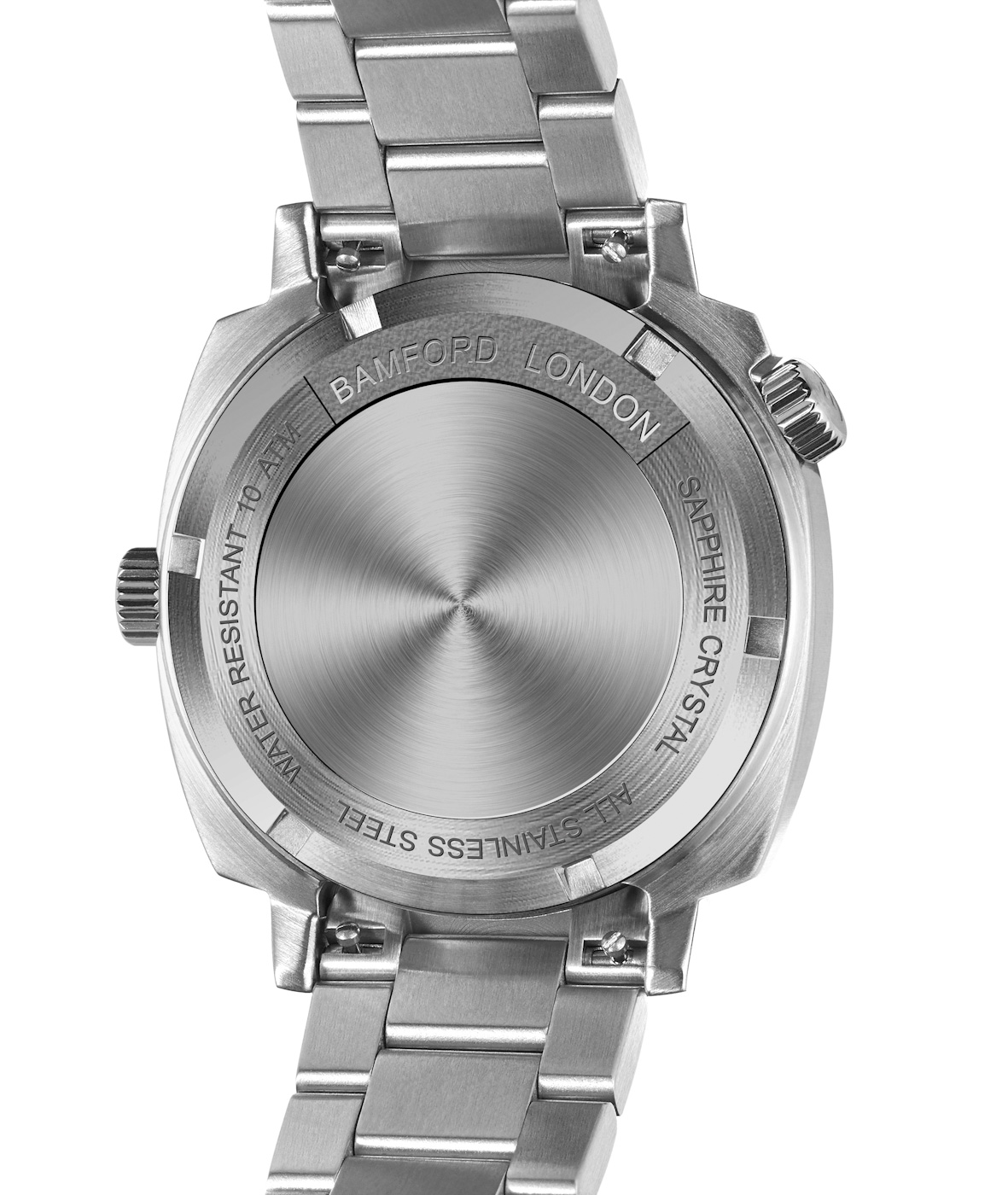 At the heart of both the Commando GMT and the Predator GMT lies the Sellita SW300 based SW330-1 automatic movement. This affordable off-the-shelf option offers reasonable performance, with stated figures coming in at 42 hours of power reserve and a 28,800 bph beat rate. 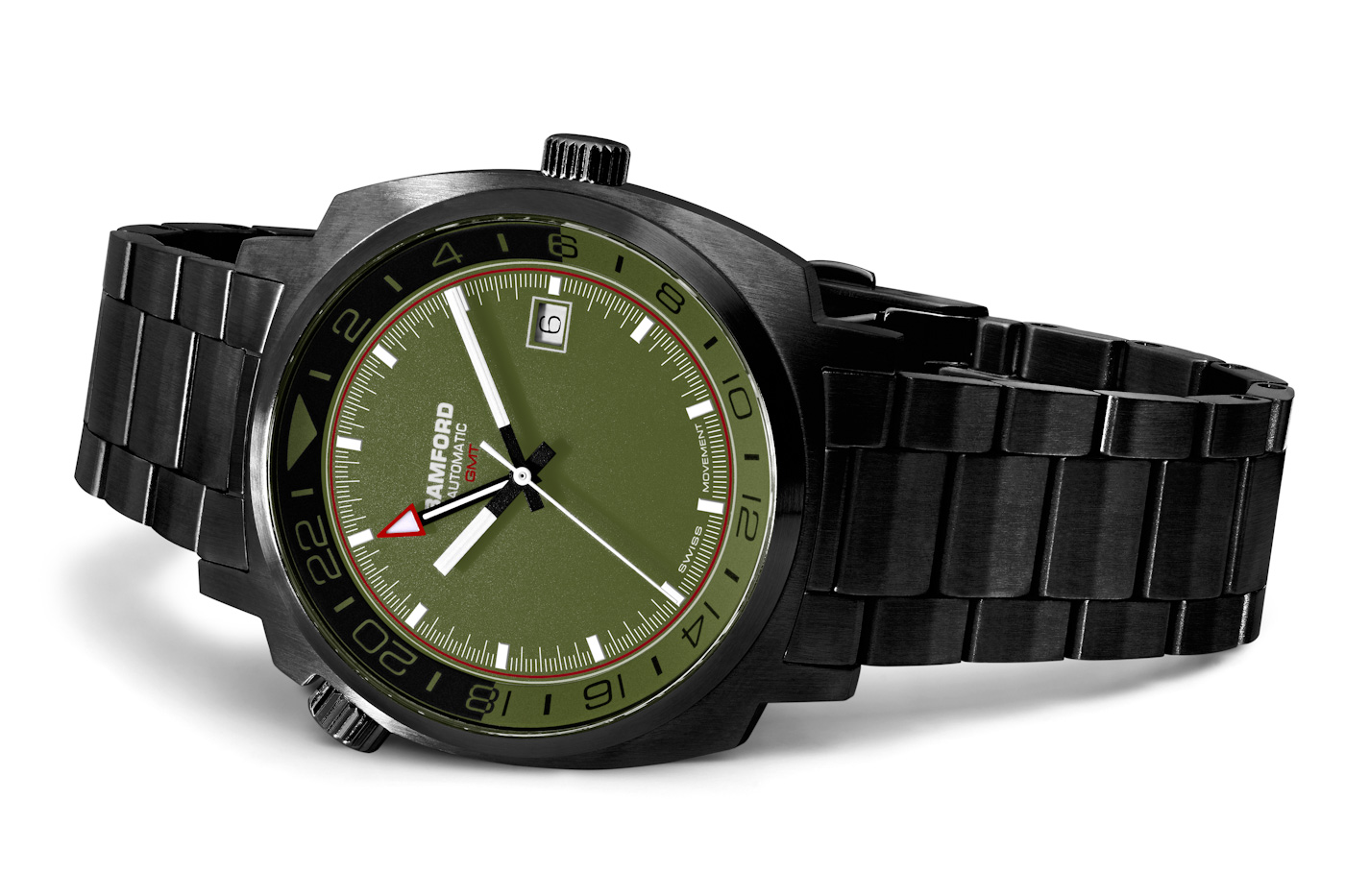 Both the Bamford London Commando GMT and the Predator GMT are mounted on brushed three link oyster style bracelets. While finishing looks reasonable on these pieces, initial images seem to show some issues with fitment on the endlinks with a noticeable gap between the links themselves and the lugs. Time will tell, however, if this issue persists with regular production examples. 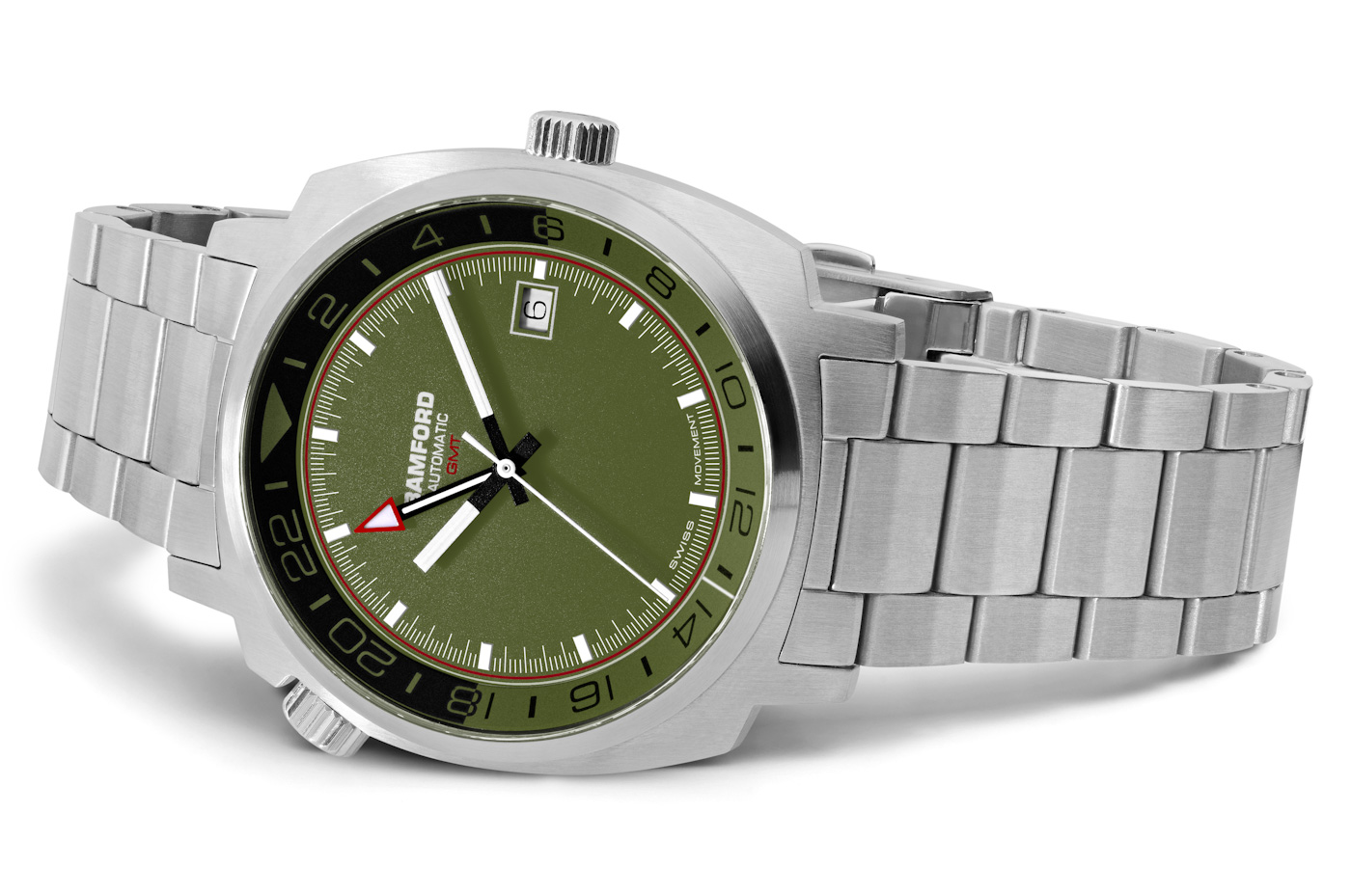 As the brand’s GMT collection enters its second year, the Bamford London Commando GMT and Bamford London Predator GMT add some of Bamford’s signature custom military-inspired ethos to the lineup. Both models will be available for purchase online in May 2020, at an MSRP of £1,100. For more information, please visit the brand’s website.