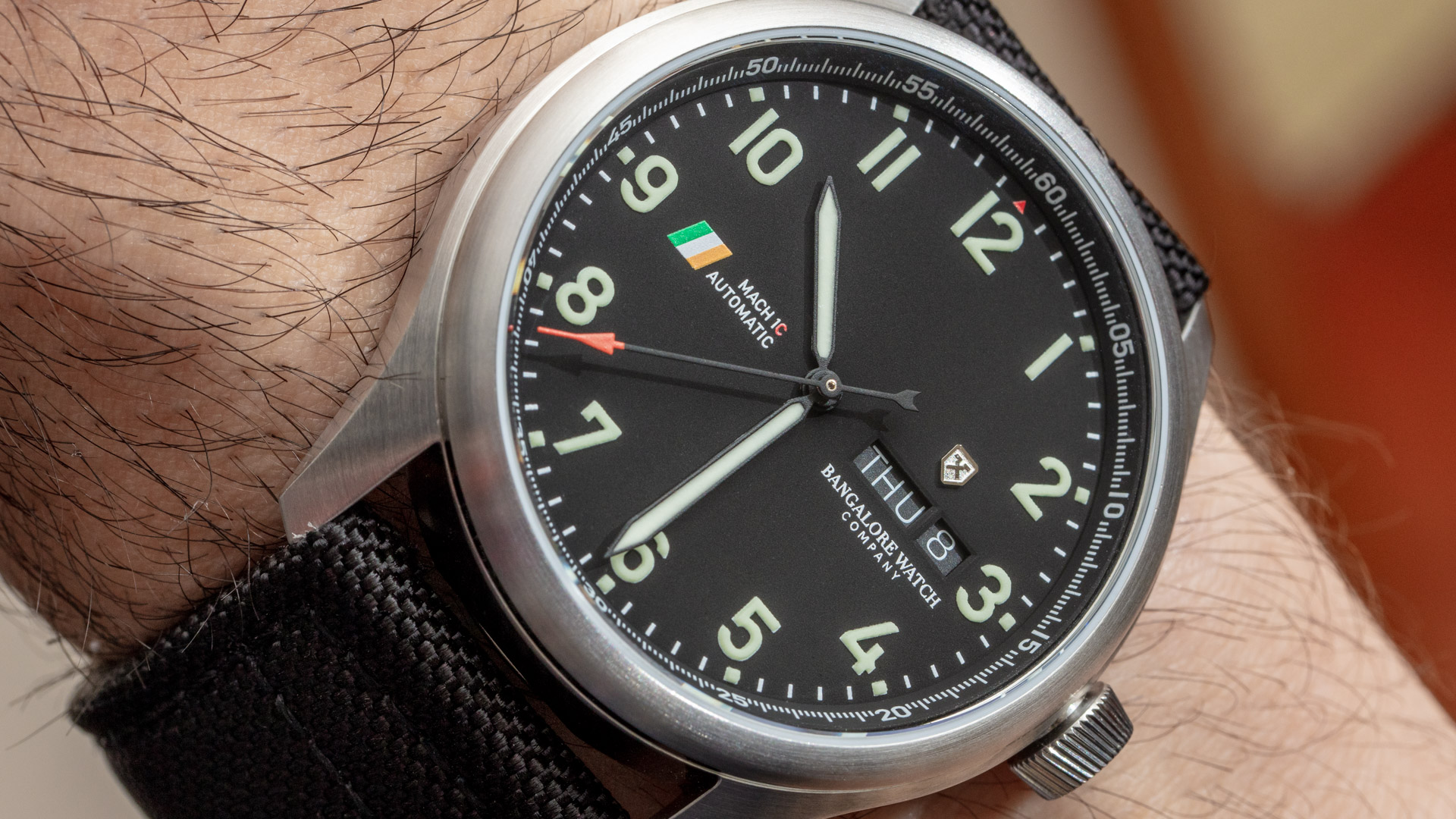 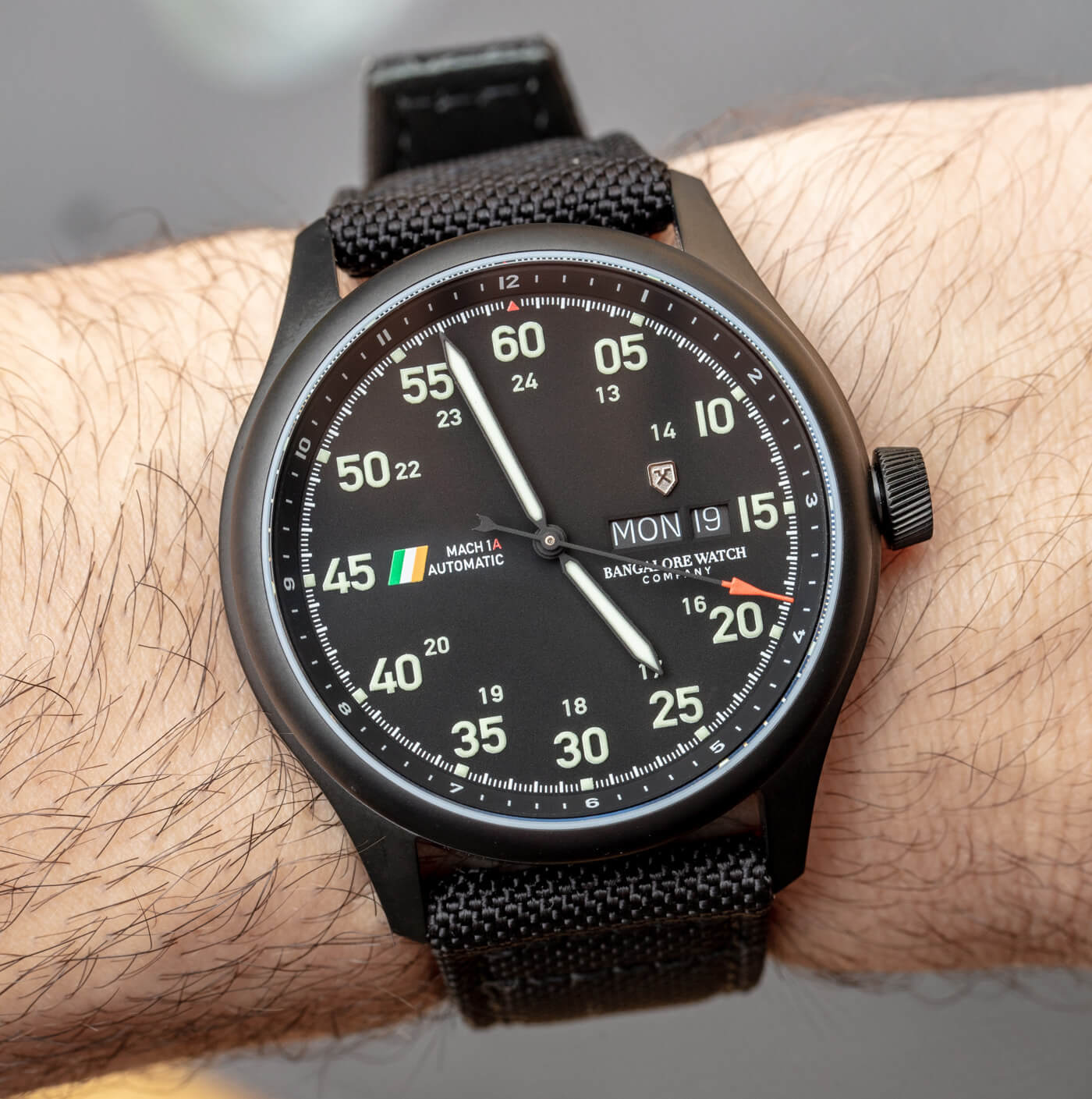 The second major watch collection from India-based Bangalore Watch Company is the MACH 1, which comes in a few flavors (and first debuted on aBlogtoWatch here). The watches are directly inspired by the brand founder’s childhood interest in the IAF (Indian Air Force), as well as the MiG 21 Type 77 planes which apparently were the cornerstone of the IAF’s fighter plane arsenal for 50 years during 1963 all the way until 2013. To celebrate 50 years of the MiG 21 Type 77, Bangalore Watch Company created this handsome and affordably priced MACH 1 collection.

The “MACH 1” names comes from the fact that the MiG 21 Type 77 was the first supersonic plane in service for the IAF. The MACH 1 comes in both “Civilian” (natural brushed steel case) and “Aviator” (black PVD-coated steel) flavors. Each of the watches further comes with two dial options that differ only in the style of hour marker, which on one version uses traditional Arabic hour numerals, and on the other uses Arabic numeral minute indicators as the hour markers. Without being able to choose one or the other dial — Bangalore Watch Company seems to simply produce both versions, allowing consumers to select which they prefer — frankly, I can’t say which is better, as it is a matter of personal taste. 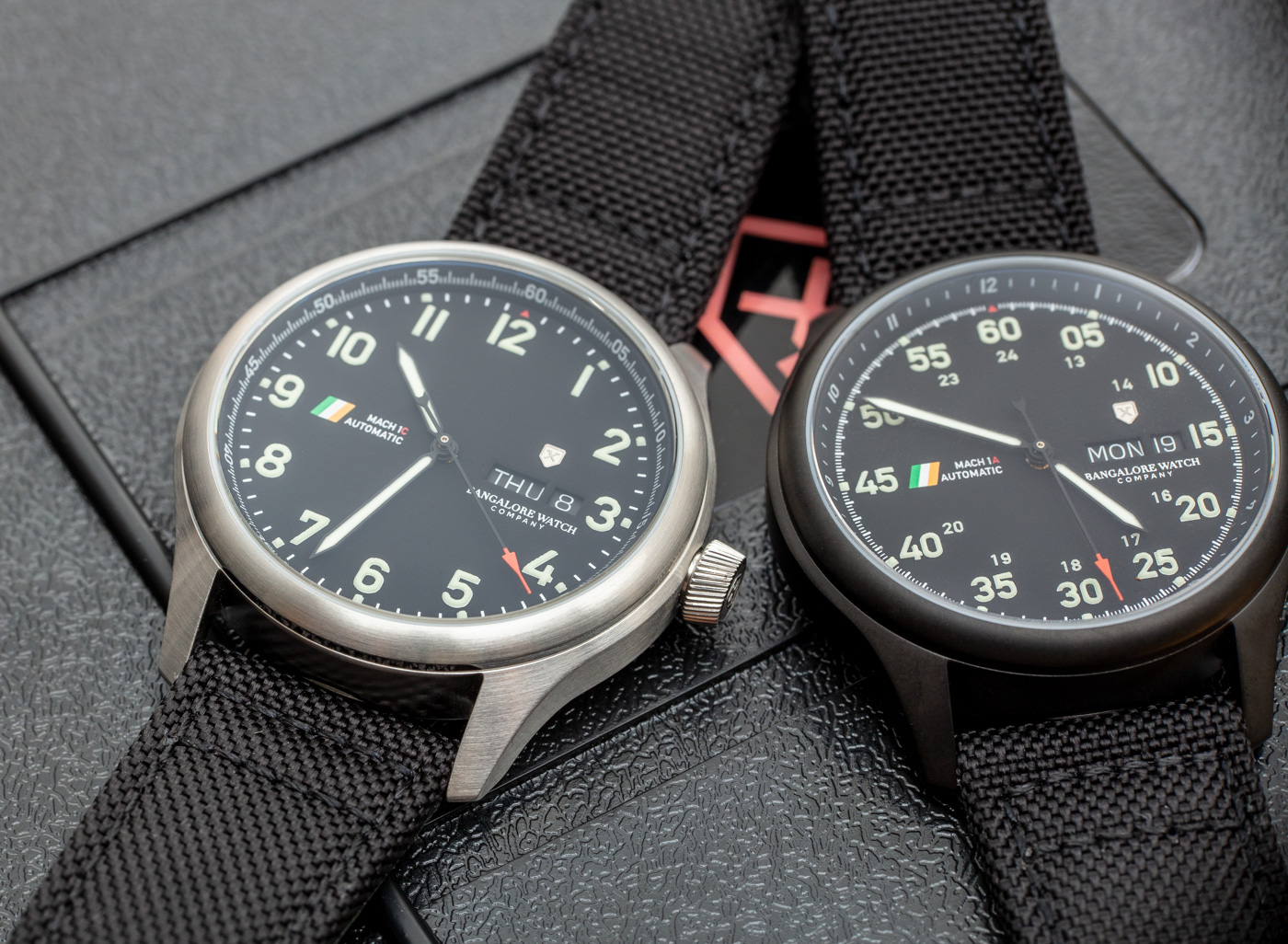 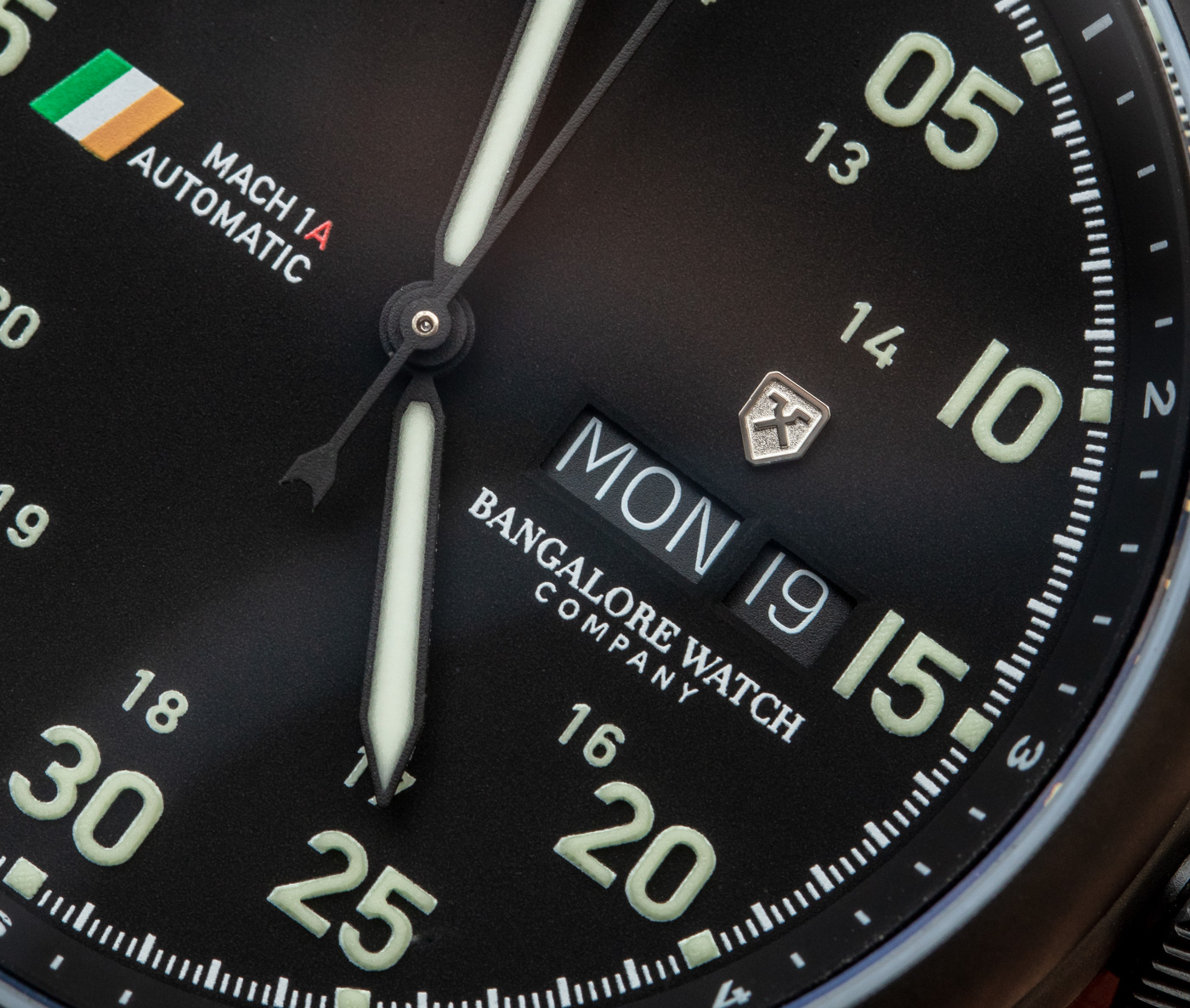 The MACH 1 is a very different style of watch when compared to the first Renaissance Automatic timepiece models which Bangalore Watch Company first released (aBlogtoWatch review here). The Renaissance Automatic watches are dressy in style, while the MACH 1 is decidedly a sports-style watch. What connects the watches together is a relatively conservative design ethos, a focus on small details, as well as a very solid value proposition. The MACH 1 edges pricing up, but also includes a more prestigious movement. Whereas the more affordable Renaissance Automatic watches featured a Japanese-made automatic mechanical movement (a Miyota 9000 series caliber), the MACH 1 watches feature Swiss Made Sellita SW220-1 automatic movement calibers. This is essentially the Sellita version of the Swiss ETA 2836.

The SW220 automatic movements feature the time with day and date indicator windows. Operating at 4Hz they, have a power reserve of 38 hours. While smaller brands such as Bangalore Watch Company can struggle when their products near the $1,000 price point, including upgrades and features such as Swiss Made movements is certainly a step in the right direction. 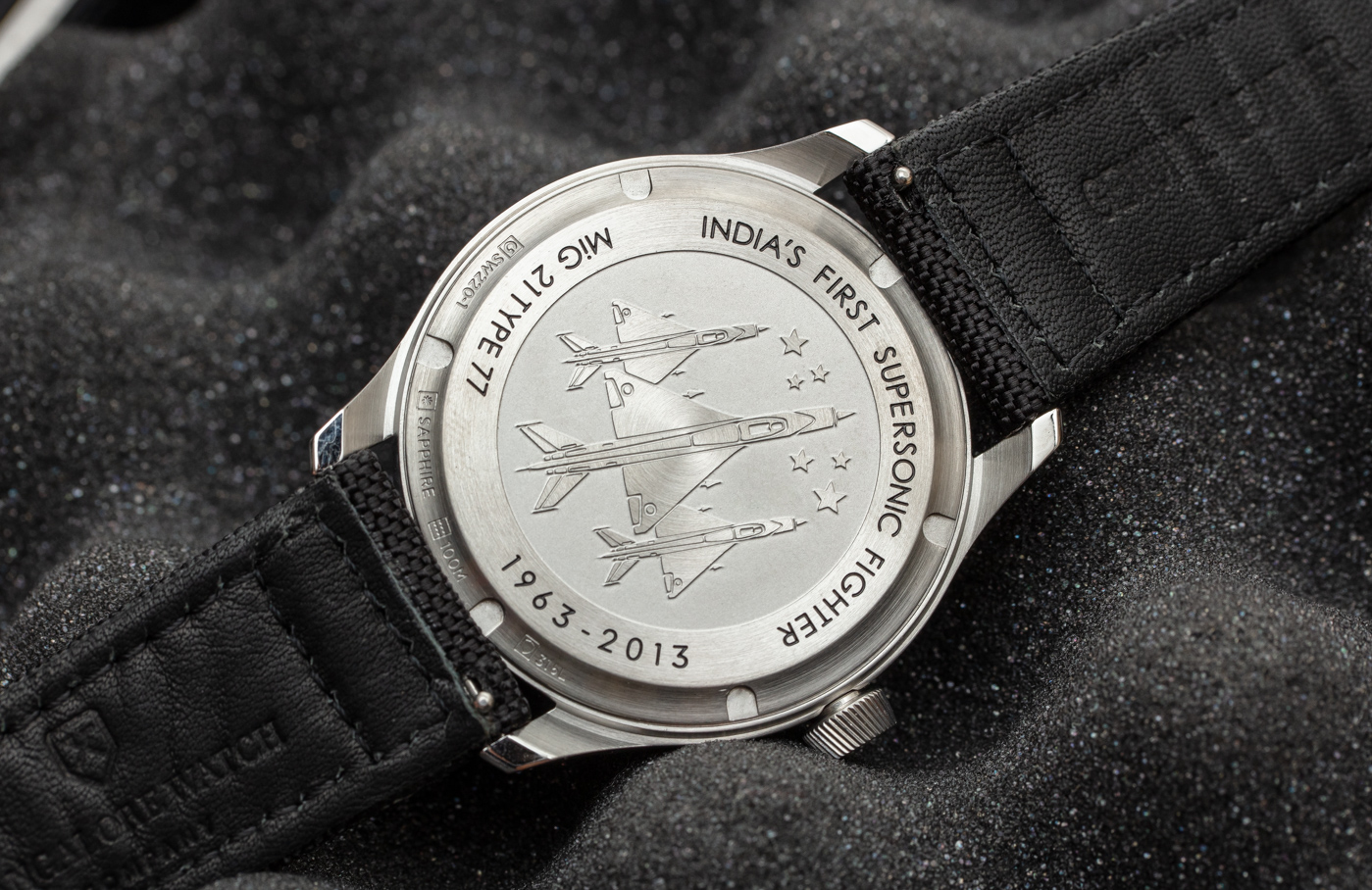 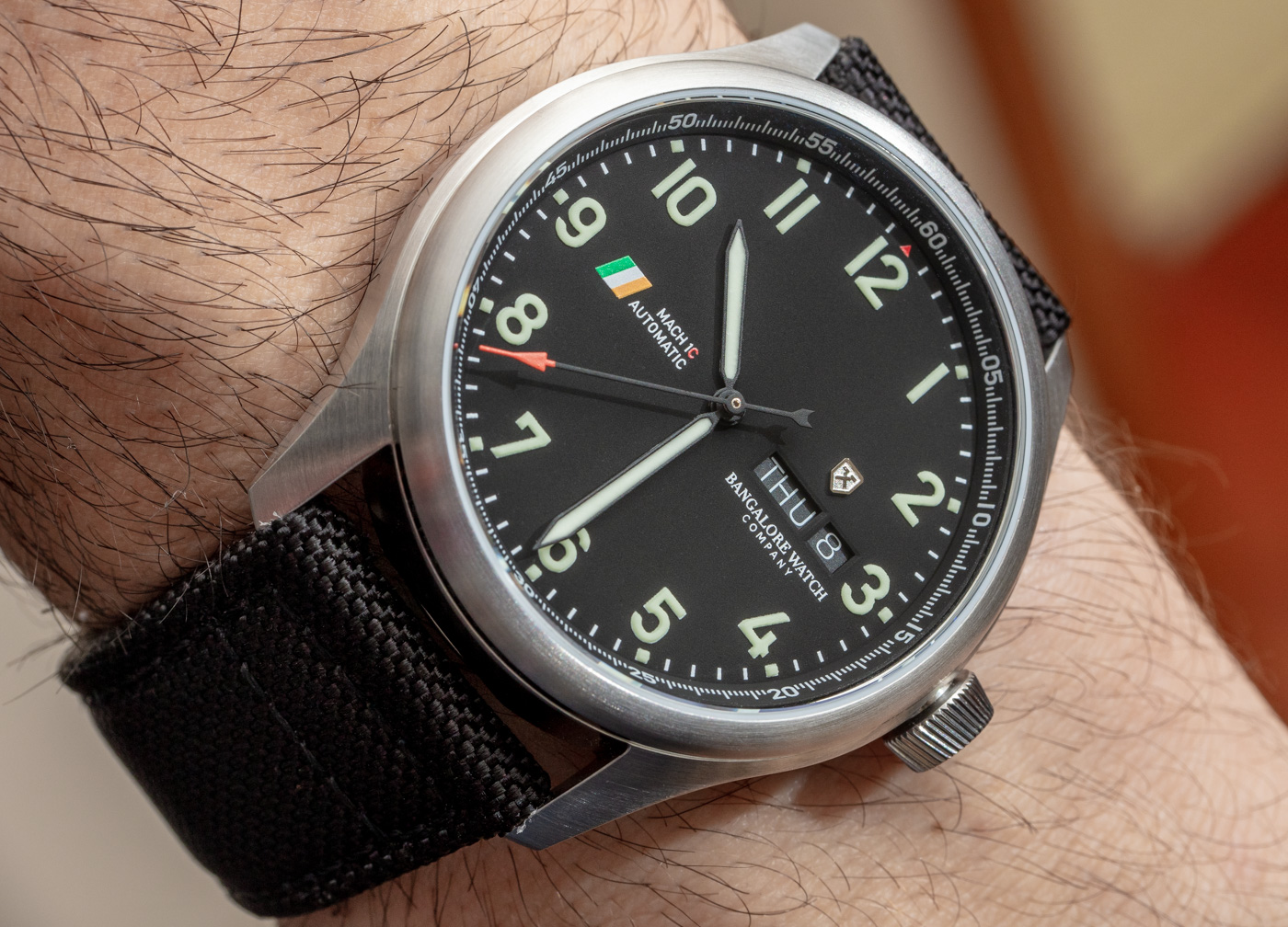 The MACH 1 case is 42mm-wide (water resistant to 100 meters), 11mm-thick, and has a 48mm lug-to-lug distance. That all translates into a very wearable, as well as universal, size for a lot of wrists. The matte-finished cases have an industrial feel that connects with the image of something to be connected with an Air Force tool, and the dials are thankfully very focused on utility. Rather than a lifestyle watch, Bangalore Watch Company really seemed to want to make a tool-style watch that looks like it could be comfortably worn inside of the cockpit. A flat, AR-coated sapphire crystal over the otherwise matte dial certainly helps to maintain very good legibility. The only polished element on the dial are parts of the small, applied Bangalore Watch Company logo. 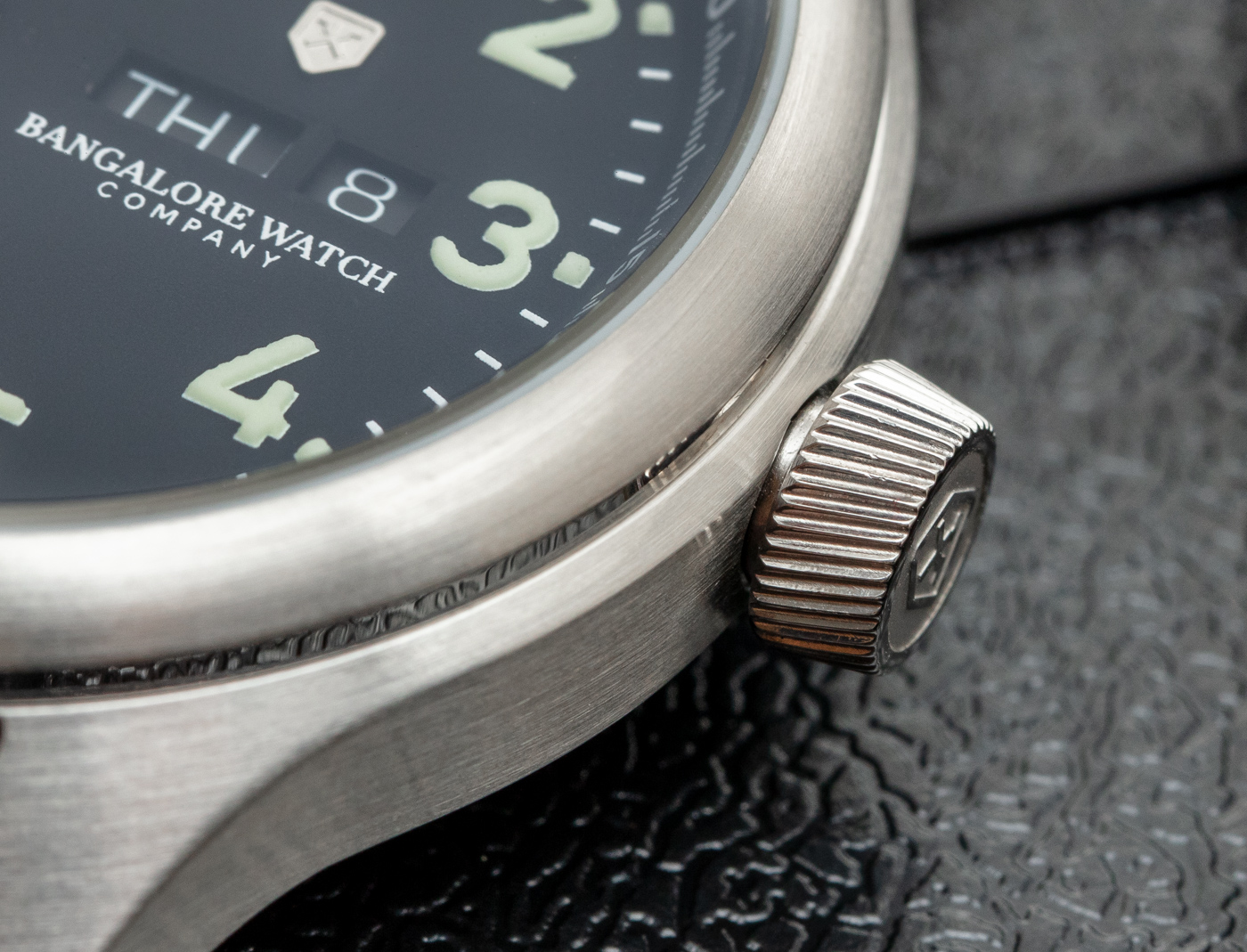 Attached to the case are pretty decent black fabric straps. I typically love how these straps look in pictures but hate to wear them as they tend to be stiff and fray quickly. Bangalore Watch Company was smart to select softer, and padded straps (leather lined) which are much more comfortable than straps on similarly-priced, or even much higher-priced watches. The 22mm-wide straps also use quick-release buckles which make them easy to swap out with something else. Also note that Bangalore Watch Company opted for bespoke steel buckles on the straps, as opposed to using standard off-the-shelf buckles that would have resulted in a cheaper look. This all goes to the attention to detail that I stated earlier is a highlight of the brand. 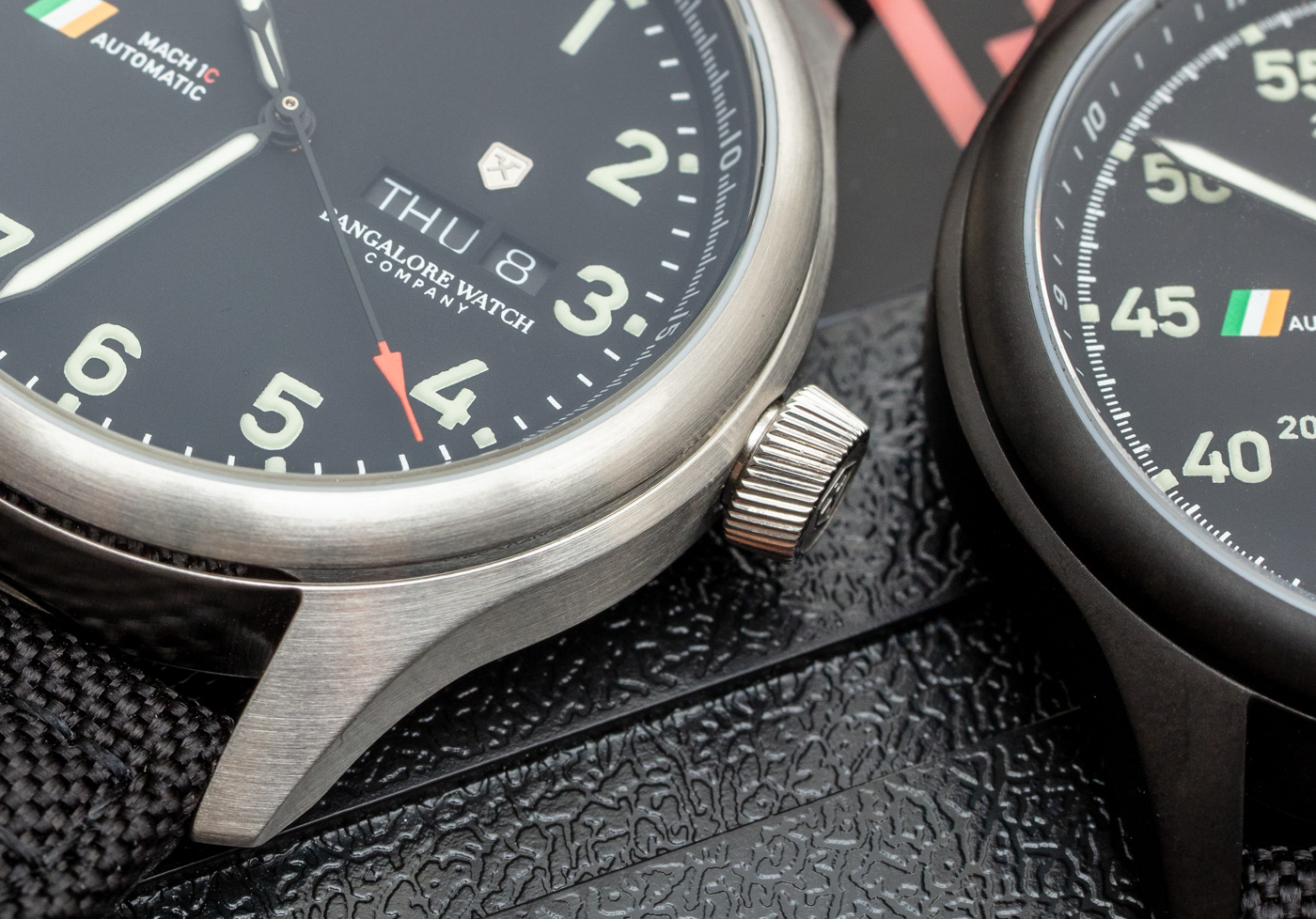 What I most appreciate about the Bangalore Watch Company MACH 1 is that it is a celebratory watch (of the IAF) but created like a tool watch. It imagines itself as a product that would have been worn by actual MiG 21 Type 77 pilots, inspired by history’s large assortment of military and professional pilot watches. The dials are clean, the faces are legible, and the wearing experience is conservative and sensible. The aesthetic is slightly retro, but there is a fair bit of “timelessness” to the look which should comfort those buyers wondering if they will still want to don the piece on their wrist years down the road.

As is the case with anything military-inspired, there will be those who are fiercely interested in the story that created these watches and some who will not be so moved by them. Personally, even though I’ve reviewed countless military and aviation-inspired timepieces, the MACH 1 is the first I’ve ever reviewed that relates to the Indian Air Force. From a collecting standpoint, I find that interesting, and for the large population of people in or from India with some nationalist flair, the Bangalore Watch Company MACH 1 will certainly be something to consider. Don’t miss the very decent Pelican-style box that the watches arrive in. Price for the Bangalore Watch Company MACH 1 Civilian and Aviator watch is $680 USD and $730 USD respectively. Learn more at the Bangalore Watch Company website here.

Necessary Data
>Brand: Bangalore Watch Company
>Model: MACH 1 Civilian & Aviator watches
>Price: $680 – $730 USD
>Size: 42mm-wide, 11mm-thick, 48mm lug-to-lug distance
>When reviewer would personally wear it: As an attractive daily wear sports watch inspired by military aviation history and a fun story connecting it to the Indian Air Force.
>Friend we’d recommend it to first: Indian nationals or those with an emotional interest in the IAF or other elements of India’s military or air force history.
>Best characteristic of watch: Sensible, well-made, and affordable aviator watch that, in addition to celebrating a theme, also performs well as a tool-style timepiece.
>Worst characteristic of watch: One might call it a niche-appeal wrist watch in the scheme of timepiece enthusiasm, but when judged against the total population of India (and Indians living outside of India), it isn’t all the niche. The two dial options are so similar in appeal it might cause some consumers to pause too long to make a purchase decision.