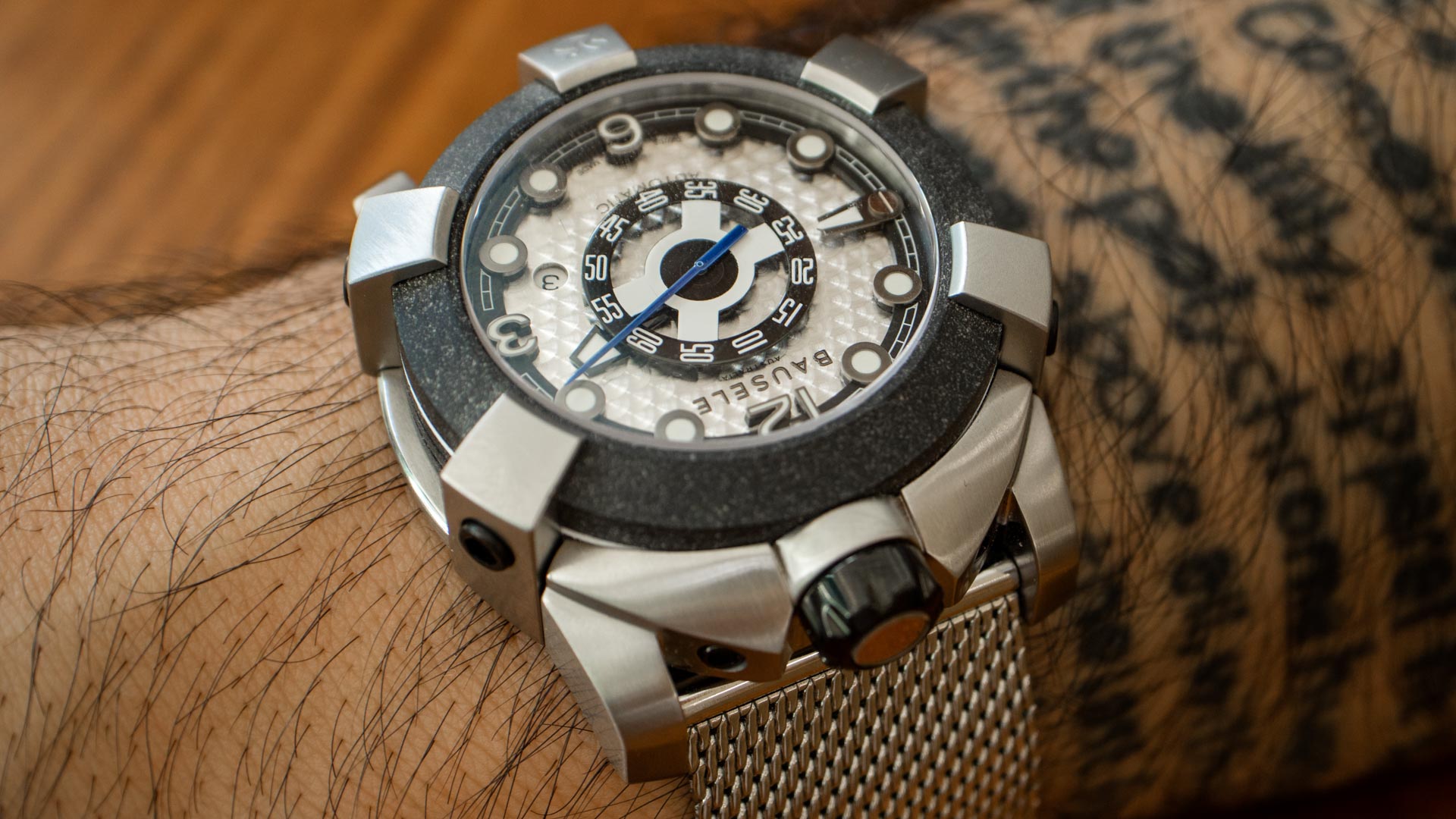 Australian watchmaker Bausele is a relatively young brand, founded in 2011 by industry veteran Christophe Hoppe, who has previously worked for Universo (a component manufacturer for the Swatch Group) and served as CFO for Technomarine. After spending over a decade working in Geneva and La Chaux-de-Fonds, Christophe moved to Australia in 2010 and launched his own brand called Bausele (which stands for Beyond Australian Elements), themed around the landscapes, elements, and culture of the country. Each Bausele watch contains a little bit of Australia in the crown; sand from Bondi and Whitehaven beaches, opal from Coober Pedy, or red earth from the Kimberley. With its bold red color, the latter is arguably the most aesthetically interesting option and was chosen for the brand’s halo product, the aptly named Bausele Terra Australis watch. I’ve had the opportunity to wear this rather unique watch for a few weeks now, and while it’s a very polarizing timepiece and not without its flaws, it also demonstrates that there is real potential to be found in Australian watchmaking. 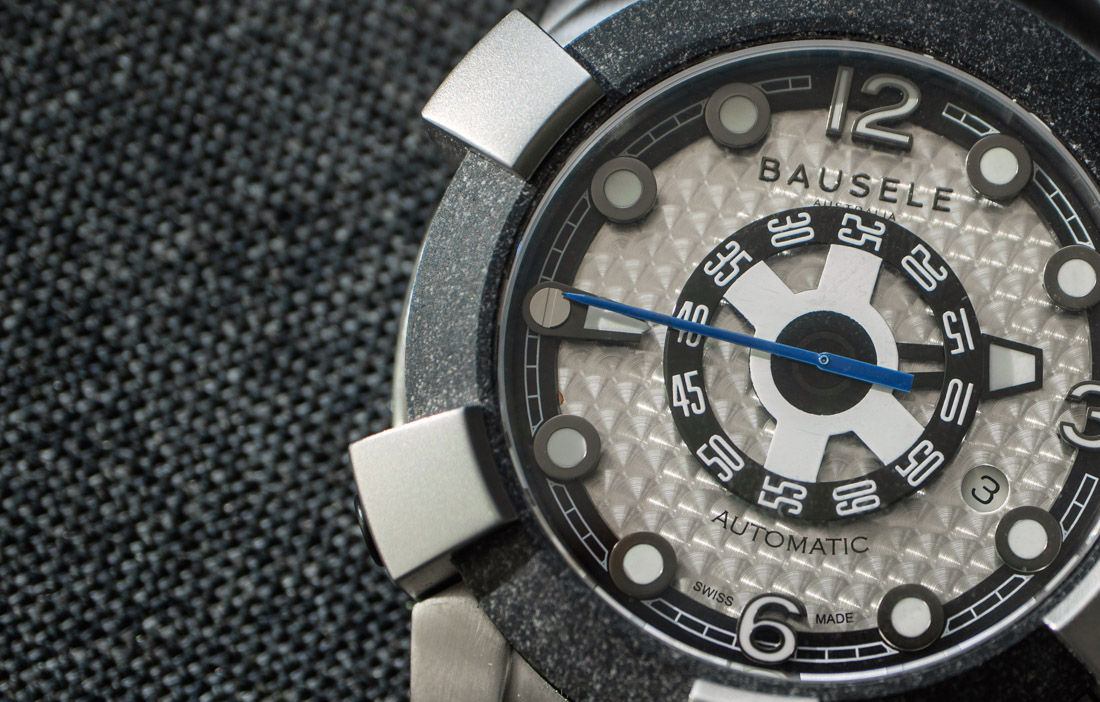 Bausele’s watches are all inspired by Australia and contain local elements in the crown, but the Bausele Terra Australis pushes the envelope further with an Australian-manufactured case. The interestingly dappled ring surrounding the dial is made of “Bauselite,” a lightweight ceramic-like material with an appearance and texture similar to granite. Bauselite is manufactured locally in Adelaide by a new company called Australian Advanced Manufacturing Pty Ltd., which was formed as a joint venture between Bausele and Flinders University. Component manufacturing is rare in Australia, and as an Aussie myself, I’m glad to see that Bausele is supporting the development of local industry. While wearing the Terra Australis, I often found myself idly running my fingers over the Bauselite case; it has a unique feel unlike any of the materials I’m used to in a wristwatch, and this textural element is certainly a selling point for those looking for something just a tad different from typical timepieces. 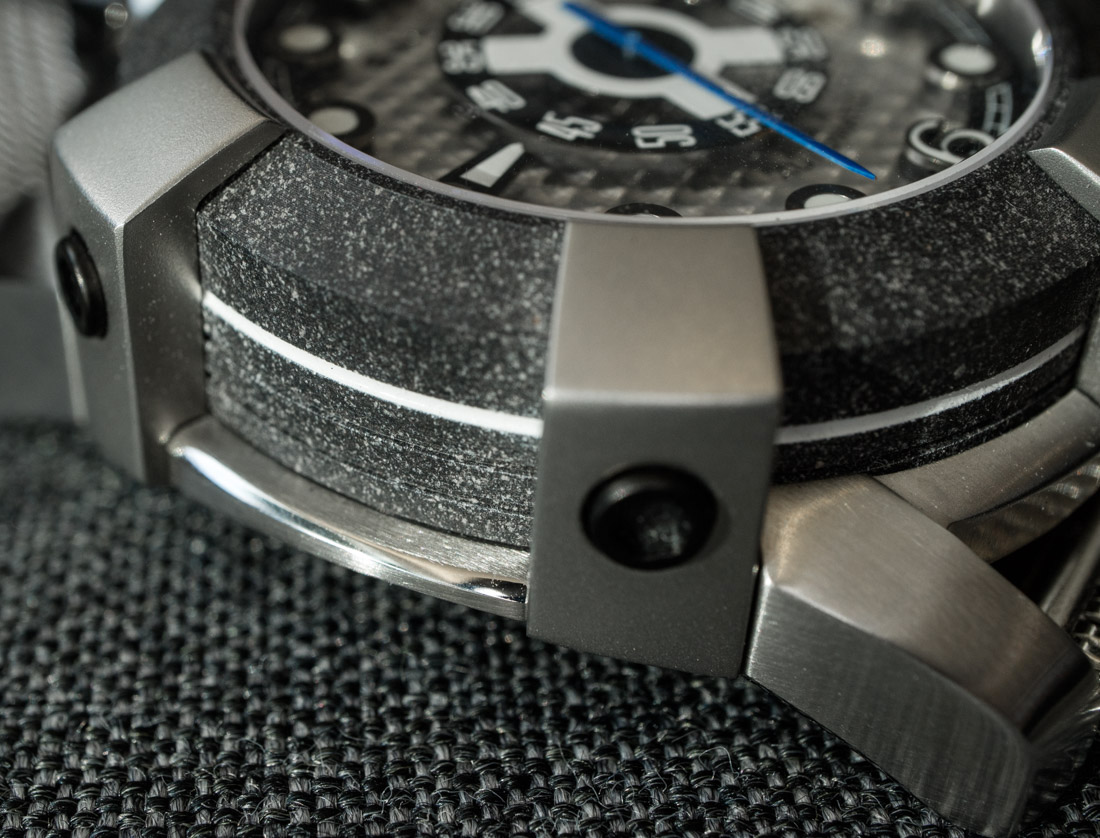 The main criticism I have of the Bausele Terra Australis is the frankly terrible leather strap that the brand has included with this watch. We’re talking 5mm of thick, stiff leather and a doubled-over keeper, which makes the already-large 46mm by 15mm case wear even larger. When I met with Christophe to receive the watch, I commented that the Terra Australis would look and wear much better on a shark mesh or Milanese style bracelet, which would emphasize the masculinity of the watch. At the same time, those options would contour better on the wrist and be more aesthetically compatible with the perlage-finished steel dial. 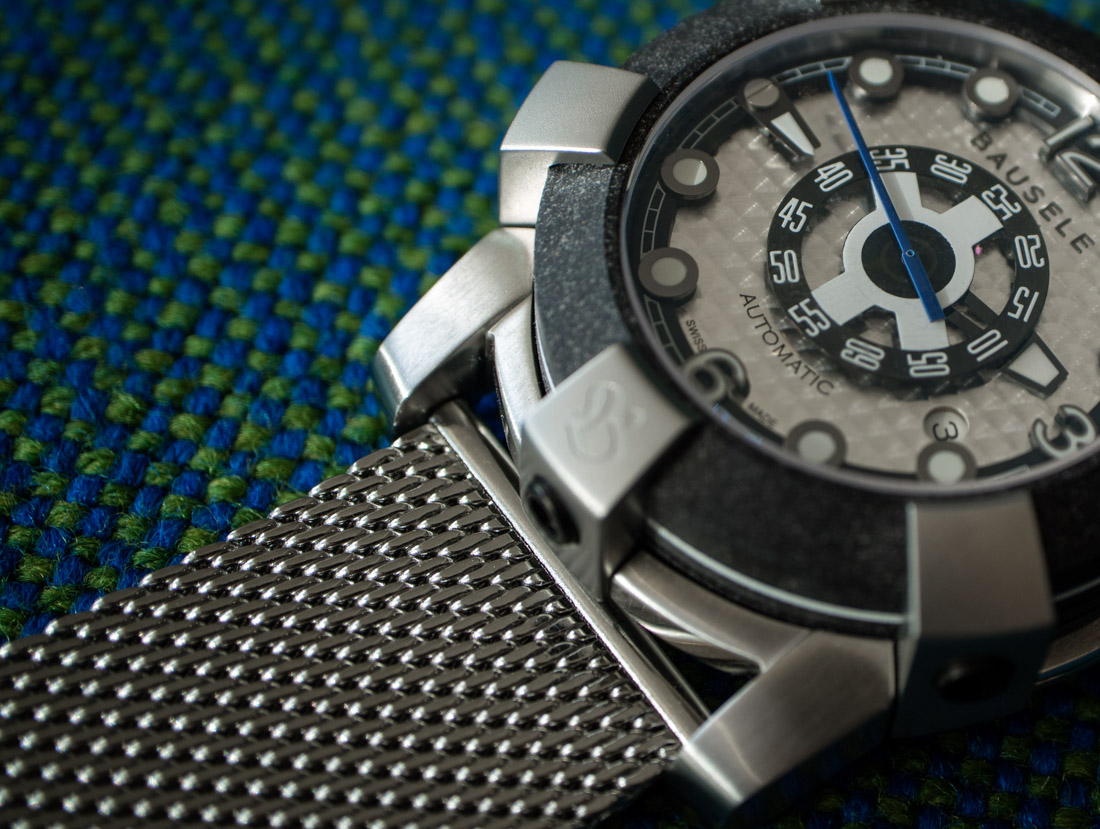 The Bausele Terra Australis has a lug width of 26mm, which certainly makes finding aftermarket straps a challenge, but to prove my point and make the wearing experience for this review more pleasant (read: doable), I went out and found an inexpensive Milanese strap on eBay. I think the result was a marked improvement over the original strap, and several colleagues commented that they’d never seen a strap swap make such a dramatic change to a watch. It seems that Christophe also agrees, and after seeing my initial photos, he has begun seeking a supplier for mesh-style bracelets to offer with the Bausele Terra Australis in the future. That’s one inherent strength of small brands like Bausele: the agility to be able to take one piece of feedback from a random watch blogger like myself and run with it. I doubt any of the established Swiss watchmakers would listen to, much less apply, any of my criticisms or feedback. 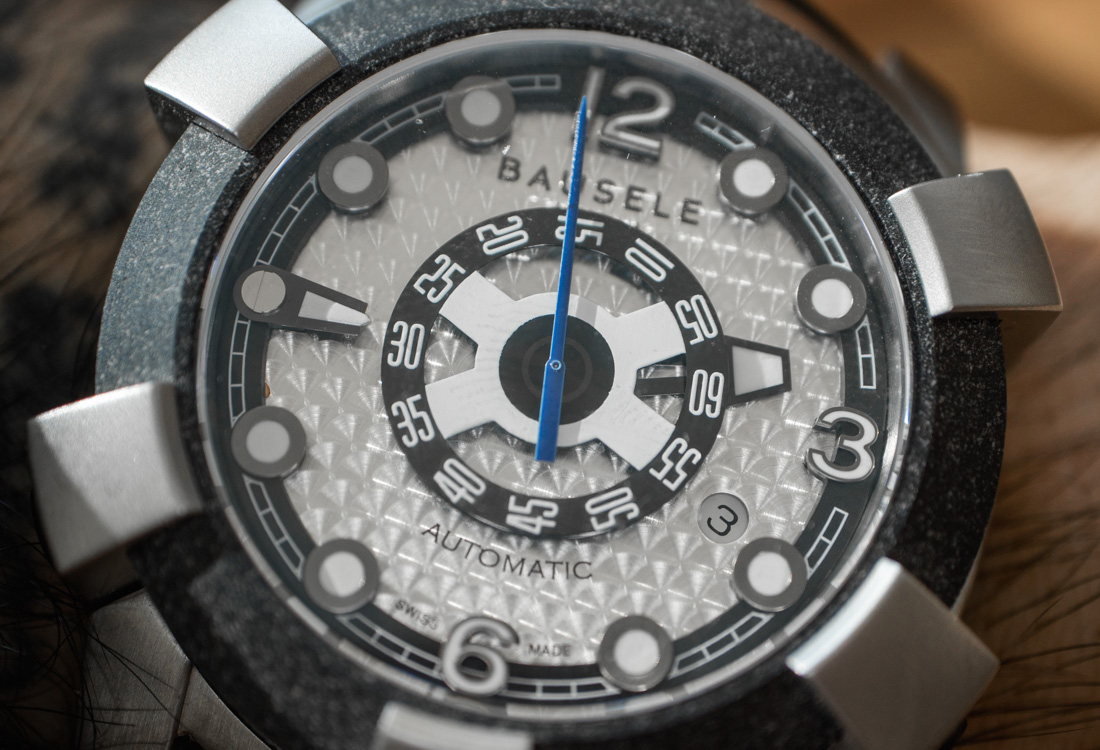 The dial of the Bausele Terra Australis takes a bit of time to get used to, as it has an unconventional format for displaying minutes. The wedge-shaped indicator at 9 o’clock points to the current time on a central rotating minutes disc, marked with Arabic numerals in 5 minute intervals. Within the central disc is a sort of X-shaped white bridge, which frames the 30-minute and 60-minute markers. This is becoming something of a signature Bausele element, as it was previously used in their Driver Auto series watches, and it can also act as a visual aid to tell roughly how far through the current hour you are. Hours are displayed in a more traditional manner, with a short wedge-shaped hour hand and large Arabic numerals at 12, 6 and 3 o’clock, with circular indexes in between. The hour markers and numerals, hour hand and minute indicator are all coated with Super-LumiNova, but the minutes disc notably is not, so nighttime legibility is restricted to hours only. 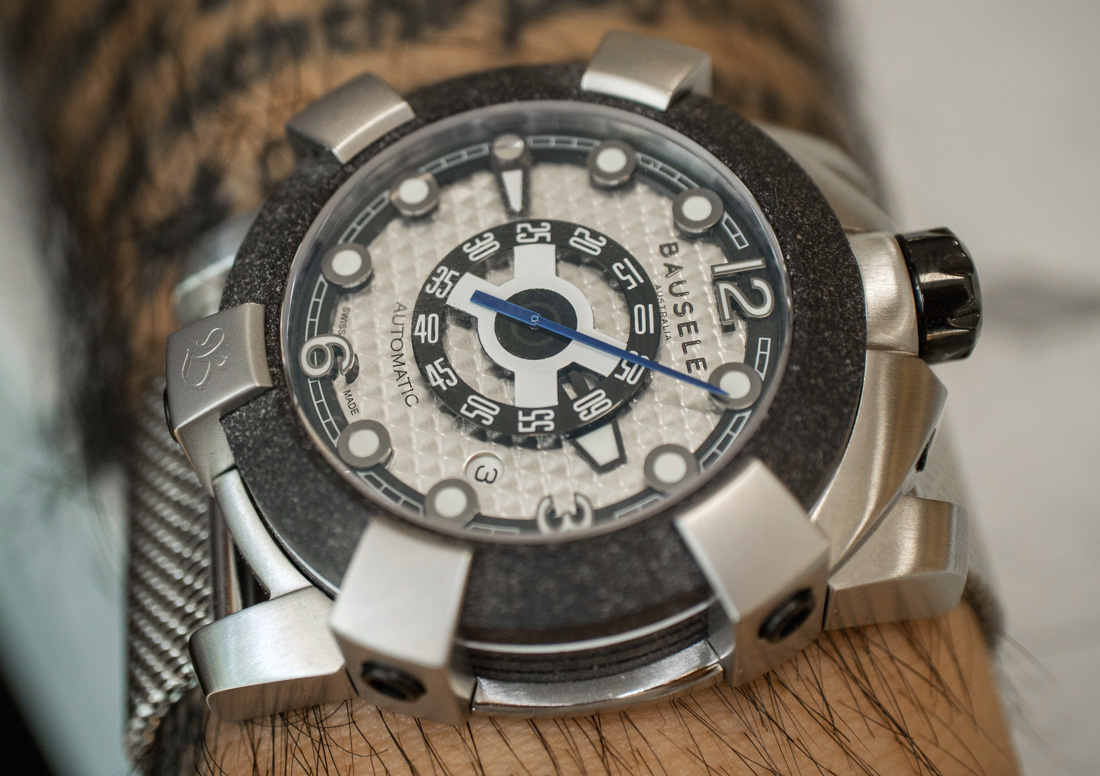 The second hand of the Bausele Terra Australis is painted blue, but heat-blued steel would have been a nicer touch. Around the dial’s periphery is a railroad-style track whose purpose seems to be entirely aesthetic rather than functional given that this watch lacks a minutes hand. A minor but unfortunate design flaw can be seen around the Arabic hour numerals; the railroad-style track stops both before and after the 12 and 3 o’clock markers, but continues unbroken through the 6 o’clock marker. A small and unframed date window has also been squeezed in at 4 o’clock, an unusual location that I rather like, as it doesn’t disrupt dial symmetry quite as badly as does the more common 4:30 position.