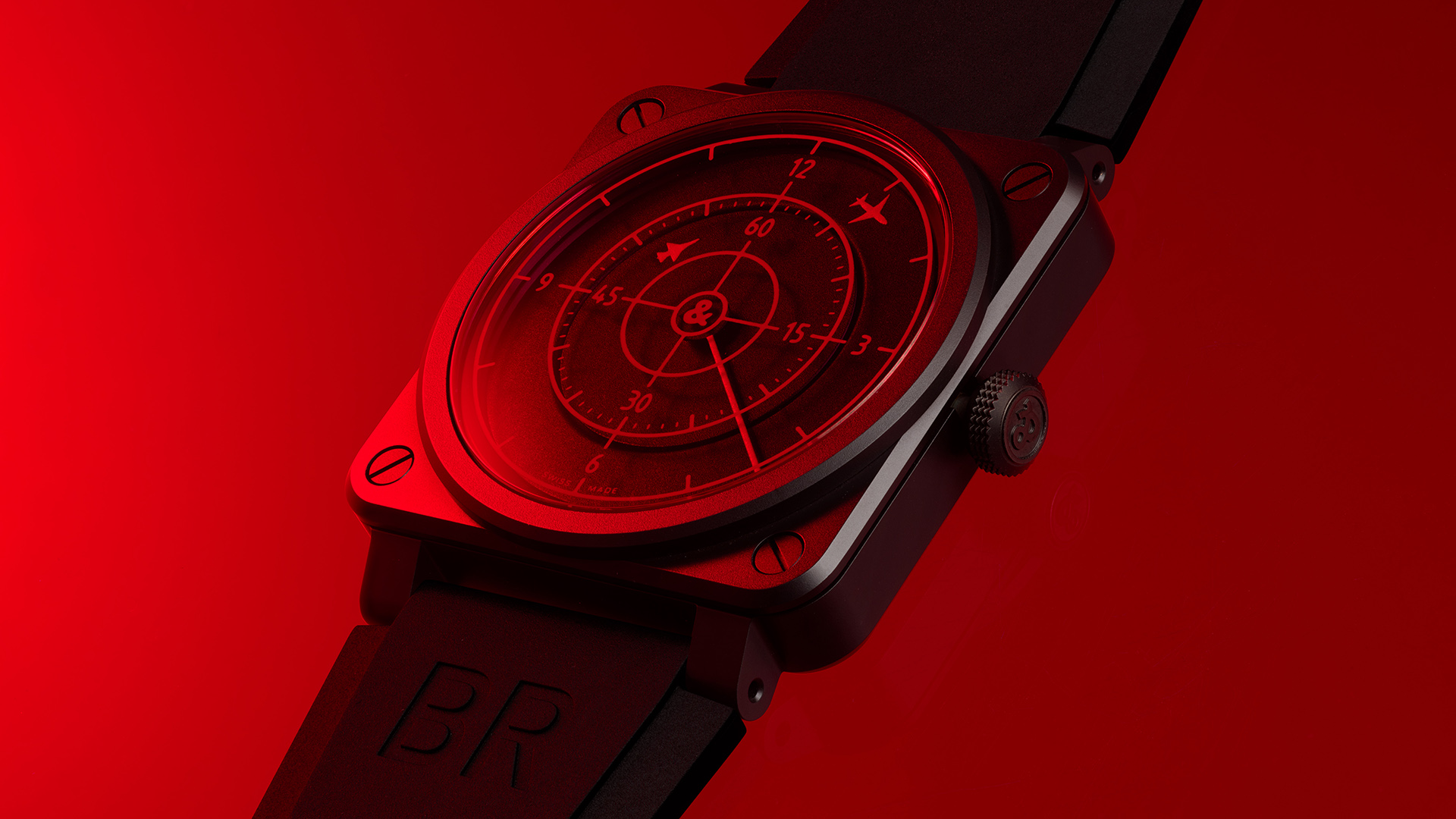 The tough, functional aesthetic of aircraft instruments has been the core of Bell & Ross’ brand identity since its inception in 1994. Over the years, this stylistic inspiration has birthed watches based on altimeters, airspeed indicators, and even fighter jet heads-up displays, but one of the most striking of these aeronautical concepts is 2011’s BR 01-92 Red Radar. With a deeply tinted red crystal and sweeping disks in place of a handset, the Red Radar captured the feel of an air traffic control radar screen and pushed Bell & Ross’ design team in an avant-garde new direction. For 2021, the brand has returned to the Red Radar concept, and aims to reinvent that milestone design with new materials, new proportions, and a more detailed and legible layout. The new limited edition Bell & Ross BR 03-92 Red Radar Ceramic is a playful, eye-catching distillation of the exaggerated fighter jet spirit at the core of the French marque.

The 42mm flat square case of the Bell & Ross BR 03-92 Red Radar Ceramic is a cornerstone of the brand’s signature look with its rounded corners, abbreviated lugs, and four accent screws. As the name suggests, Bell & Ross uses a modern matte black ceramic for this case, saving weight and substantially improving scratch resistance over stainless steel. By far the most striking element of this case, however, is the deep red anti-reflective sapphire crystal. Much of what appears to be the Red Radar Ceramic’s dial is actually printed on the underside of this crystal, including the hours and minutes scales along with the central ampersand emblem. This gives the dial design a surprising visual depth in images, bringing added drama to an already unorthodox layout. These printed scales also depart markedly from the ones on the original 2011 Red Radar. Outside of the shared crosshair dial pattern and the clean, instrument-inspired font used for the Arabic numerals, the new Red Radar Ceramic delivers a more robust, detailed scale for both the hours and minutes tracks that should greatly improve legibility over the original. Bell & Ross rates this sporty, aviation-inspired case at a solid 100 meters of water resistance. 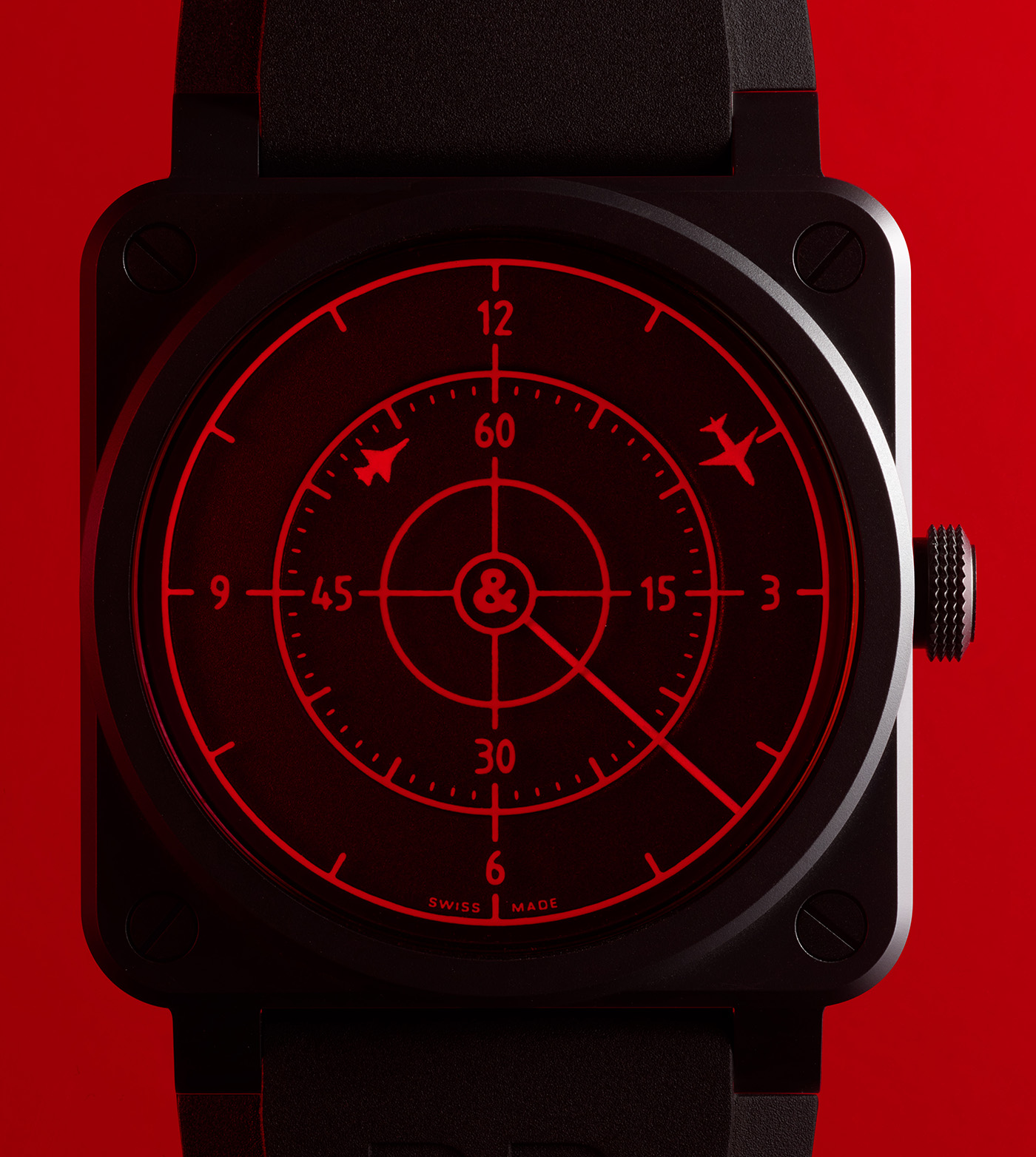 With so much of the apparent dial design of the Bell & Ross BR 03-92 Red Radar Ceramic located on the crystal, the actual dial of the watch is incredibly simple. The stick seconds hand is the only traditional hand here, which should provide an intriguing facsimile of a sweeping radar display. Like its 2011 predecessor, the hours and minutes are tracked here with the use of disks, but rather than the simulated radar sweep graphics of the original this new model uses aircraft silhouettes as indicators. Bell & Ross uses the compact silhouette of a fighter jet to represent the minutes display, with an overall outline that seems to suggest the F-16 Fighting Falcon. For a clear contrast, the hours display instead uses a passenger airliner. The arrangement of these elements, however, may cause some confusion for first-time viewers. While nearly every analog timepiece in existence uses a shorter hand for hours and a longer one for minutes, here the natural layout is reversed, with the minutes display on the smaller inside disk. Although this would likely cause little nuisance after a period of acclamation, the potential impact to at-a-glance legibility could be serious.

At the heart of the Bell & Ross BR 03-92 Red Radar Ceramic beats the Sellita SW300-1 based BR-CAL.302 automatic movement. The BR-CAL.302 is a common sight inside Bell & Ross’ offerings, and beyond the date delete here the movement is more or less the same as in other models from the brand. Performance for the BR-CAL.302 is slightly underwhelming, with a 38 hour power reserve at a 28,800 bph beat rate. Bell & Ross delivers the BR 03-92 Red Radar Ceramic with a pair of straps. First in the lineup is the brand’s sculpted and signed black rubber strap, with a pronounced taper towards the black PVD steel pin buckle. For a more rugged, military-inflected look, Bell & Ross also includes a black synthetic fabric strap with a layered construction and a hook-and-loop closure. 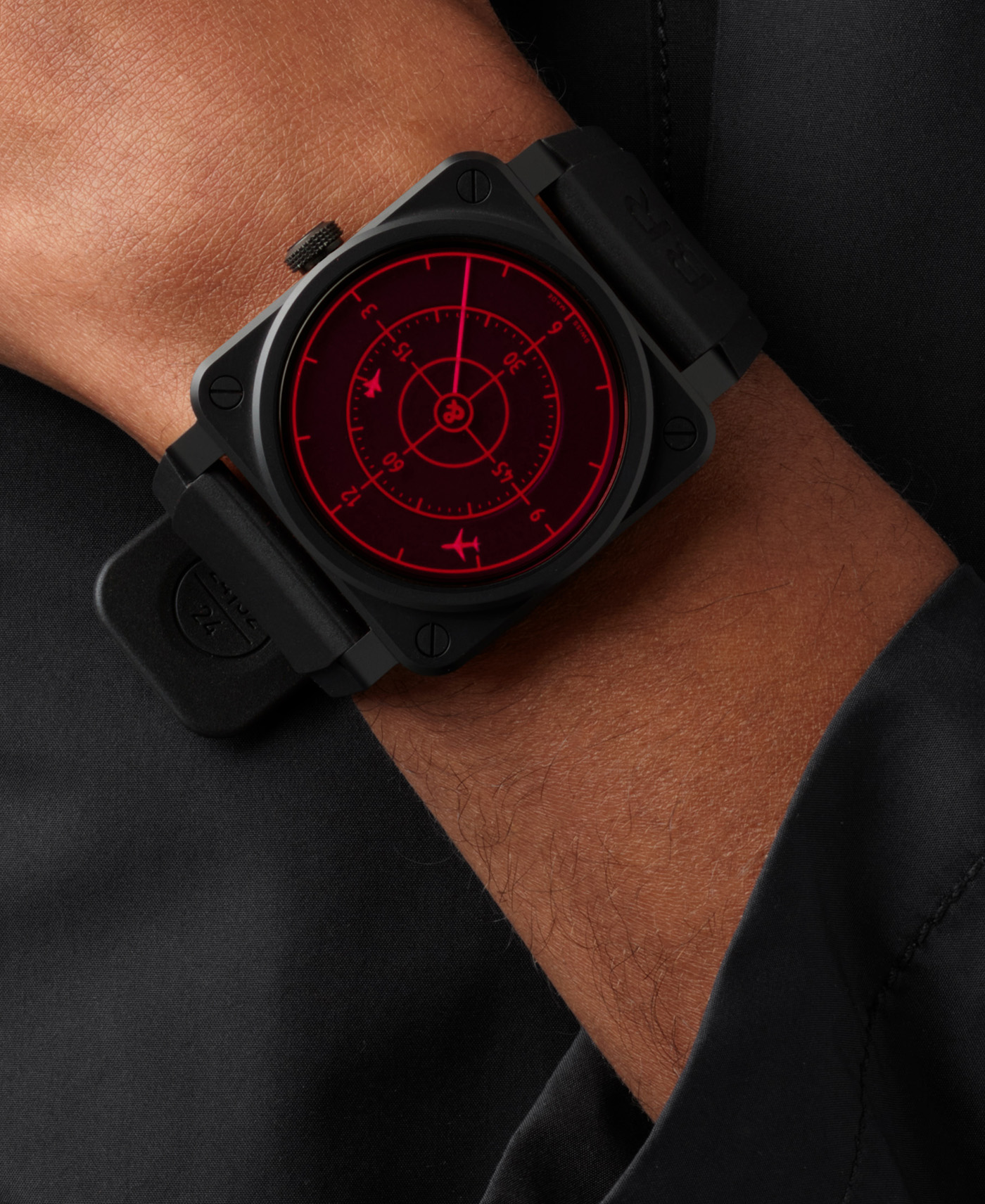 Offering one of the clearest and boldest visions of the brand’s jet-powered stylistic ethos, the limited edition Bell & Ross BR 03-92 Red Radar Ceramic is one of the most striking and flat-out fun releases from the brand in recent years. Only 999 examples of the Bell & Ross BR 03-92 Red Radar Ceramic will be made. The watch is available now through authorized dealers at an MSRP of $4,300. For more details, visit Bell & Ross’ website.