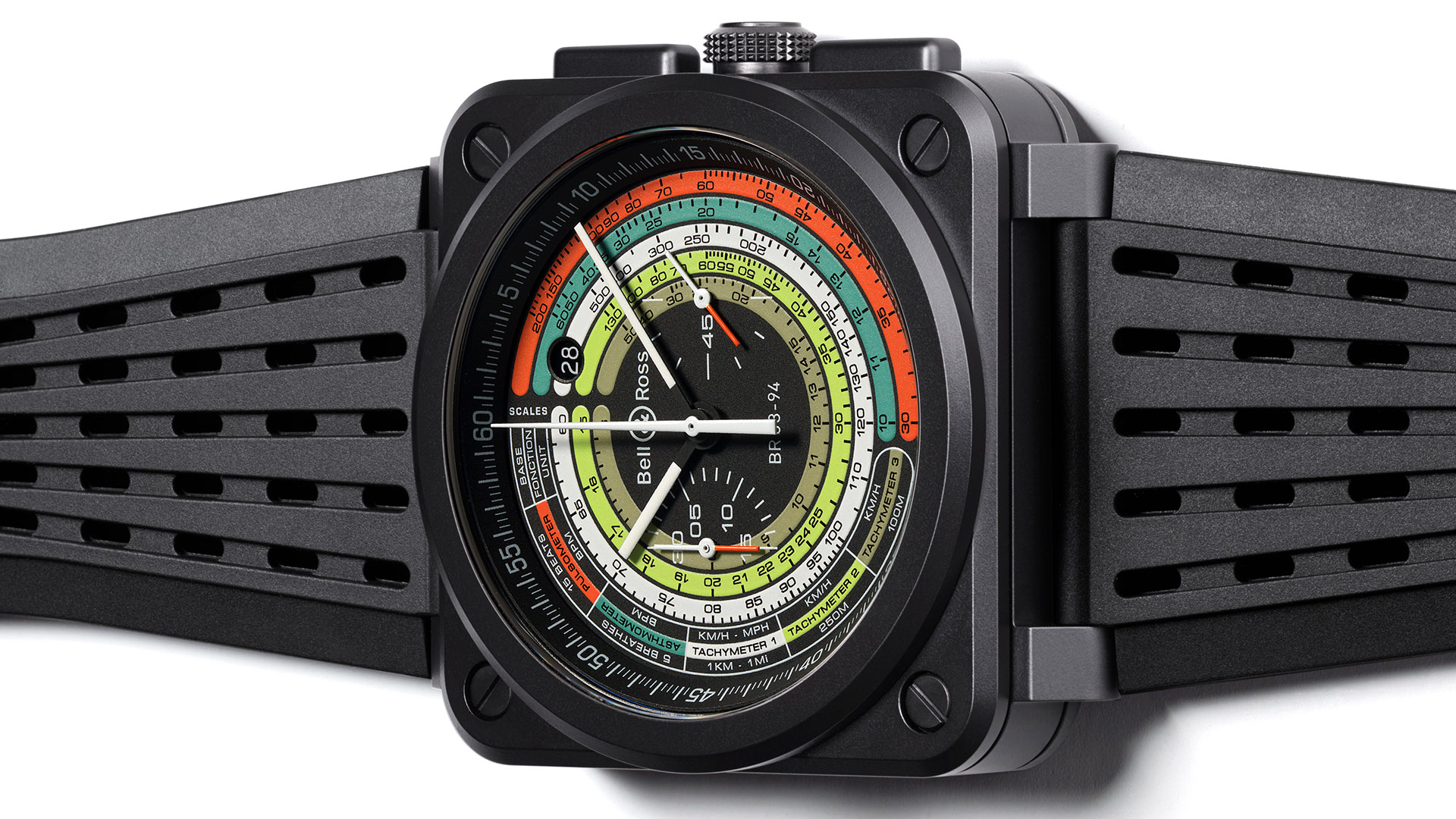 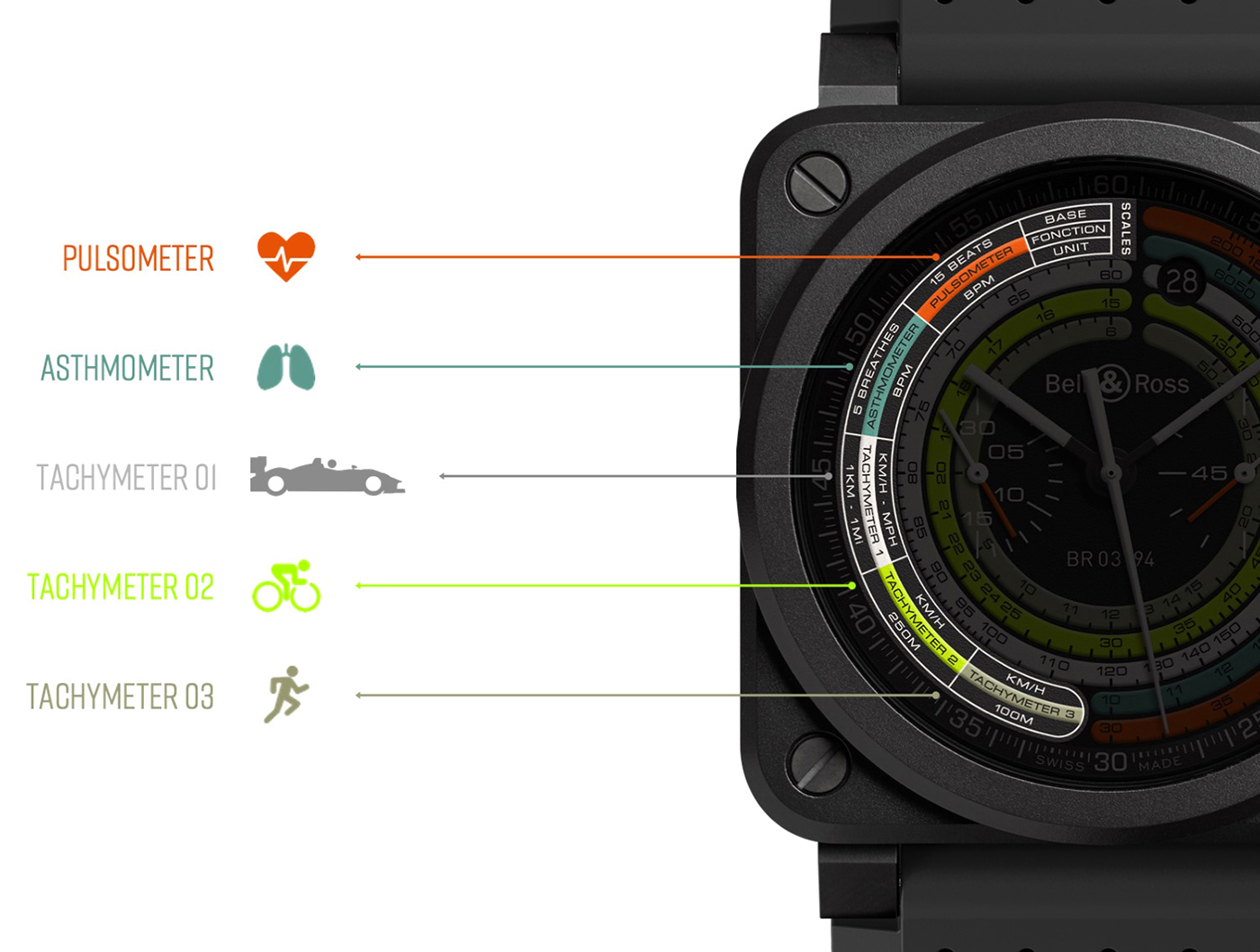 As mechanical complications go, the chronograph stands as arguably the most versatile option of all. The applications of tracking an elapsed time on the fly are nearly endless, especially when overlaid with a second set of information to determine an average rate. Tachymeters are naturally the most common examples of this in modern watchmaking, but scales measuring everything from heart rates to the distance of a sound are far from unheard of, especially in more classically-styled chronograph designs. Bell & Ross shakes up this stylistic paradigm with its latest release, bringing its boldly modern aircraft instrument-inspired design language to a multi-scale chronograph with a vibrant character and a focus on fitness. The new limited edition Bell & Ross BR 03-94 Multimeter offers a bright and graphic take on the multi-scale chronograph, which should deliver a wealth of useful information in an eye-catching package. 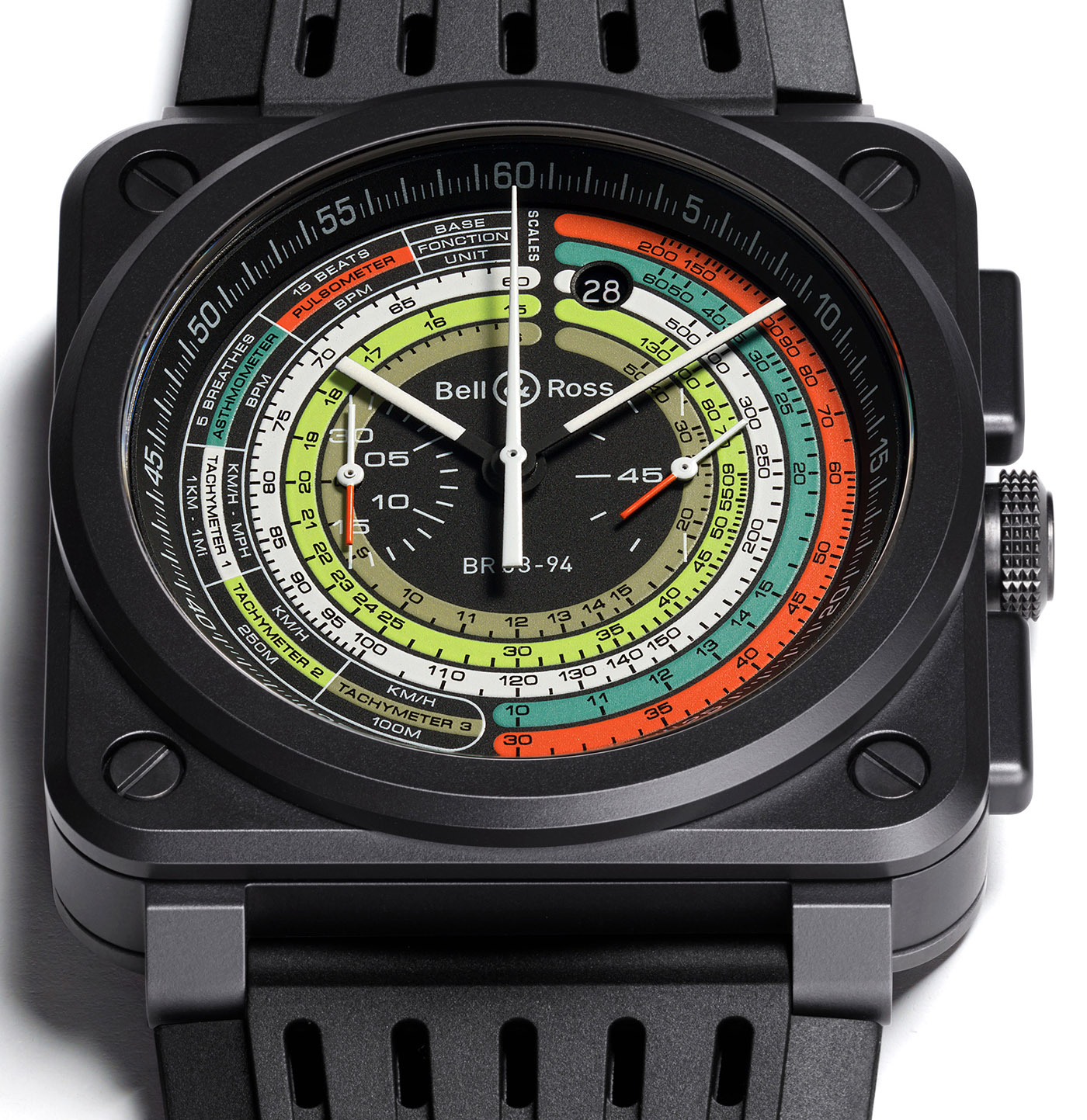 The Bell & Ross BR 03-94 Multimeter shares its 42mm matte black ceramic case with several other models in the BR 03-94 line. Like the rest of the series, this case follows the brand’s signature cockpit gauge-inspired rounded square form, with a narrow chamfered bezel, prominent decorative screws, and short wedge-style lugs. Bell & Ross cleanly integrates the chronograph complication into this familiar form in images, with long rectangular pushers that harmonize well with the overall form. In keeping with the BR 03-94 Multimeter’s athletic focus, Bell & Ross rates the watch for a suitably sporting 100 meters of water resistance. 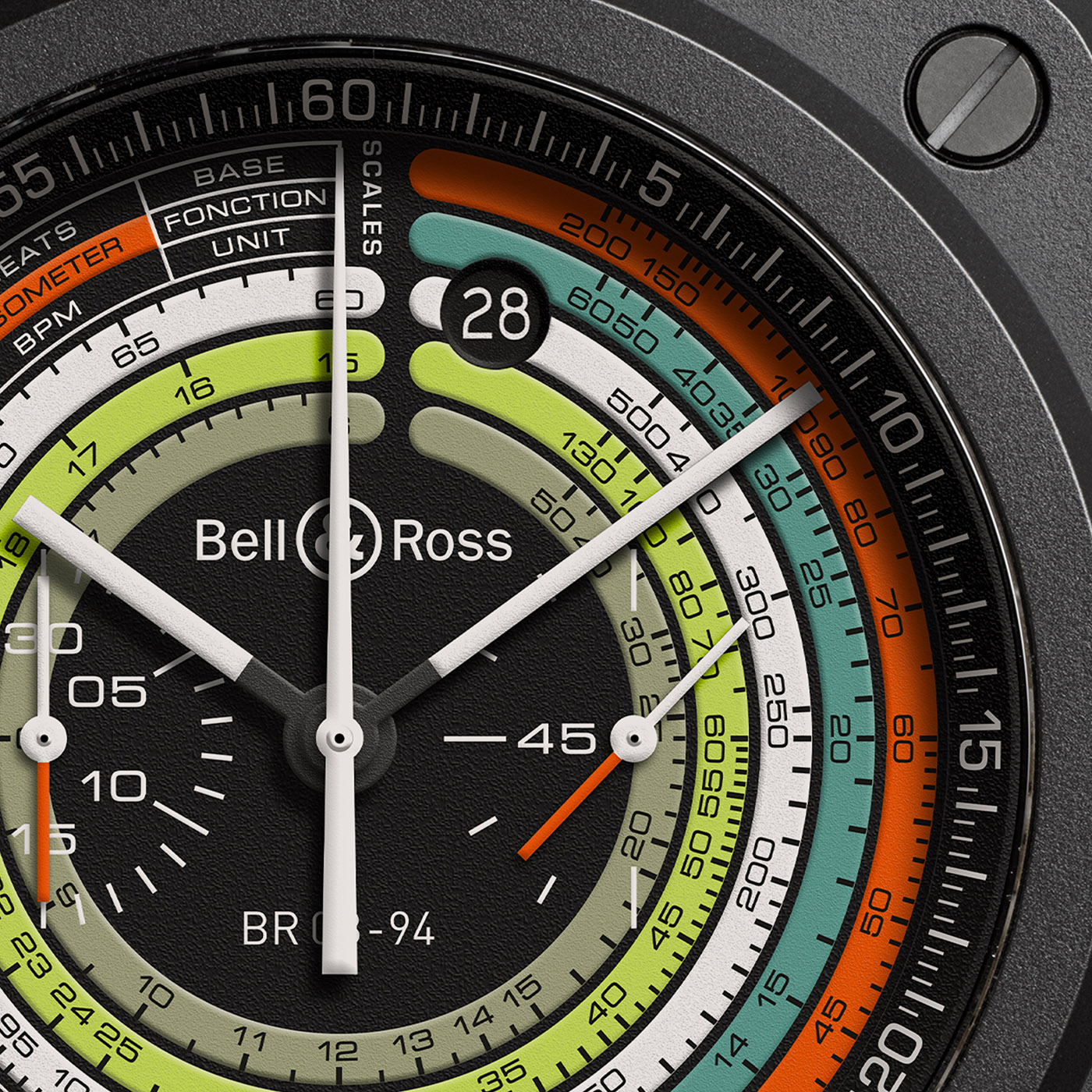 At first glance, the Bell & Ross BR 03-94 Multimeter’s dial is a clean break from the ornate and delicate multi-scale chronograph designs of the past. Visually, it arguably has more in common with vintage-style decompression-scale divers such as the Mido Ocean Star Decompression Timer 1961 and early iterations of the Fortis Marinemaster than it does with chronograph design cues, with its broad swathes of multiple colors broken up into several smaller tables. On closer inspection, however, the BR 03-94 Multimeter elegantly integrates a wide range of data into a lively yet functional all-in-one timing tool for athletes. Not counting the outer seconds scale on the sharply angled rehaut, the BR 03-94 Multimeter’s dial includes no less than five concentric chronograph scales, each delineated by its own color. The outermost track in blazing orange is a pulsometer scale, useful for quickly and accurately measuring heart rates, while the next ring in the sequence is a muted seafoam green and features a rarely-seen asthmometer scale for tracking a wearer’s breathing rate. Of course, the two scales are closely related, and offer useful data during a workout, but the BR 03-94 Multimeter’s athletic bent continues through the rest of the dial as well. The middle track in white is likely the most familiar to enthusiasts, with a standard tachymeter scale calibrated with automobiles in mind. The final two tracks in canary yellow and khaki are tachymeters as well, however, but these two are calibrated specifically for cyclists and runners, respectively. It’s rare to see a tachymeter scale that abandons the traditional 500-to-60 sequence in favor of something slower-paced, and the inclusion of two separate scales of this type is sure to set the BR 03-94 Multimeter apart among sports chronograph designs. With such a complex mix of colors and scales, it can be difficult for a wearer to decipher all the data on hand, but Bell & Ross mitigates its legibility issues with several clever design solutions in images. Firstly, the outer edge of the dial from 6 o’clock to 12 o’clock is given over to a chart explaining each of the five chronograph scales and their recommended timing lengths, which should make for easy usage during heavy exercise. Givent the size of these scales and the multiple vibrant colors used, Bell & Ross wisely pares back the BR 03-94 Multimeter’s base dial elements to simple, easily legible forms. The main handset consists of elemental lumed sticks with a classic white needle chronograph seconds hand, while the subdials are adapted to accommodate the wide and complex scale tracks. Rather than interrupting both the subdial scales and the colored tracks, Bell & Ross prints only half scales for the 3 o’clock and 9 o’clock subdials and utilizes double-ended subdial hands in white and orange to compensate. It’s a striking, dramatic look that will likely prove divisive among enthusiasts, but it offers a relatively straightforward solution to the problem of subdial legibility. The date window, on the other hand, is a less efficient addition. Placed between 12 o’clock and 1 o’clock in the midst of the printed chronograph scales, this round cutout date display markedly disrupts the overall balance of the design in exchange for limited useful functionality.

Bell & Ross powers the BR 03-94 Multimeter with the ETA 2894-2 based BR-CAL.301 automatic chronograph movement. The BR-CAL.301 is a familiar sight across the brand’s chronograph lines, and offers a relatively standard 42 hours of power reserve at a 28,800 bph beat rate. To complete the design, Bell & Ross pairs the watch with a layered perforated strap in black rubber. 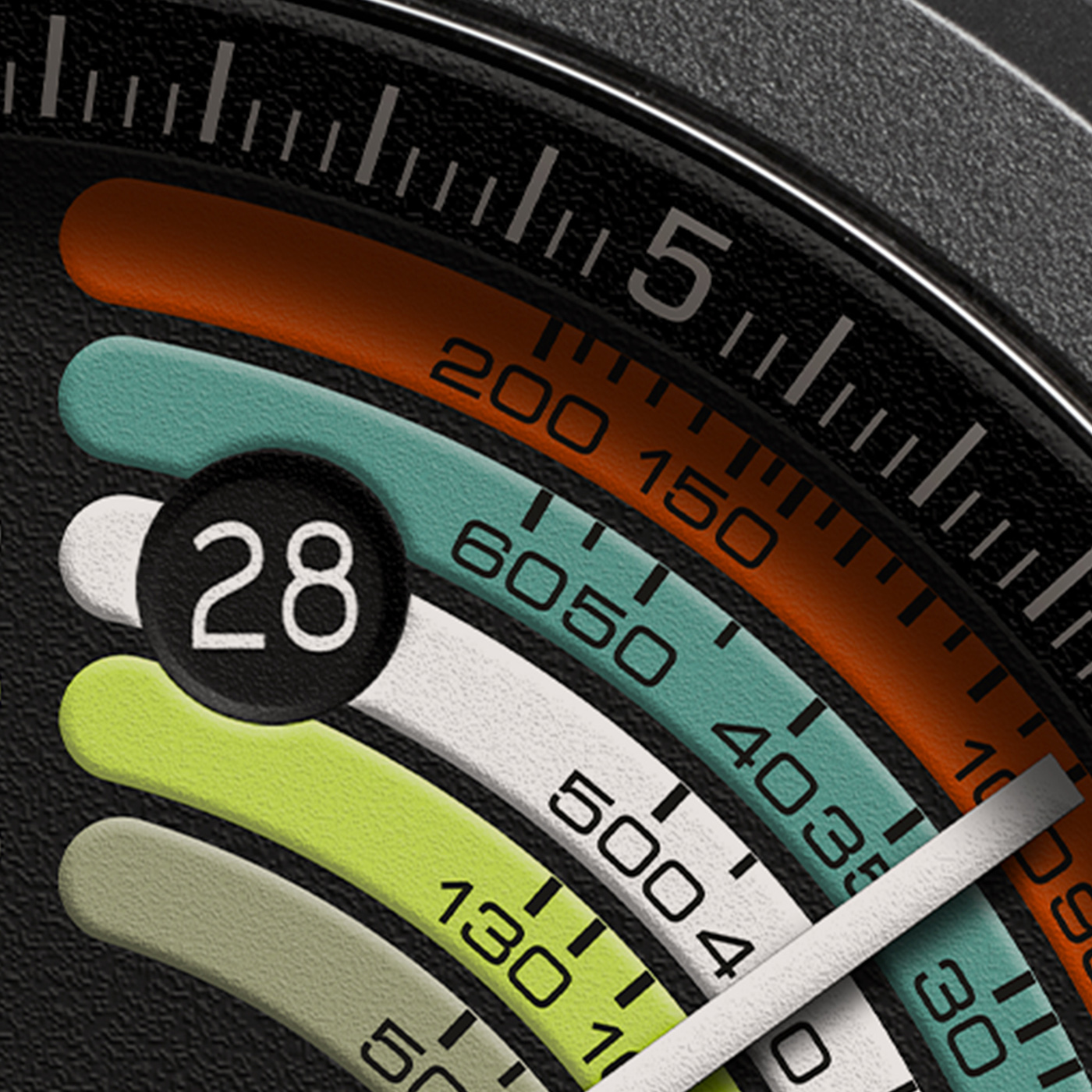