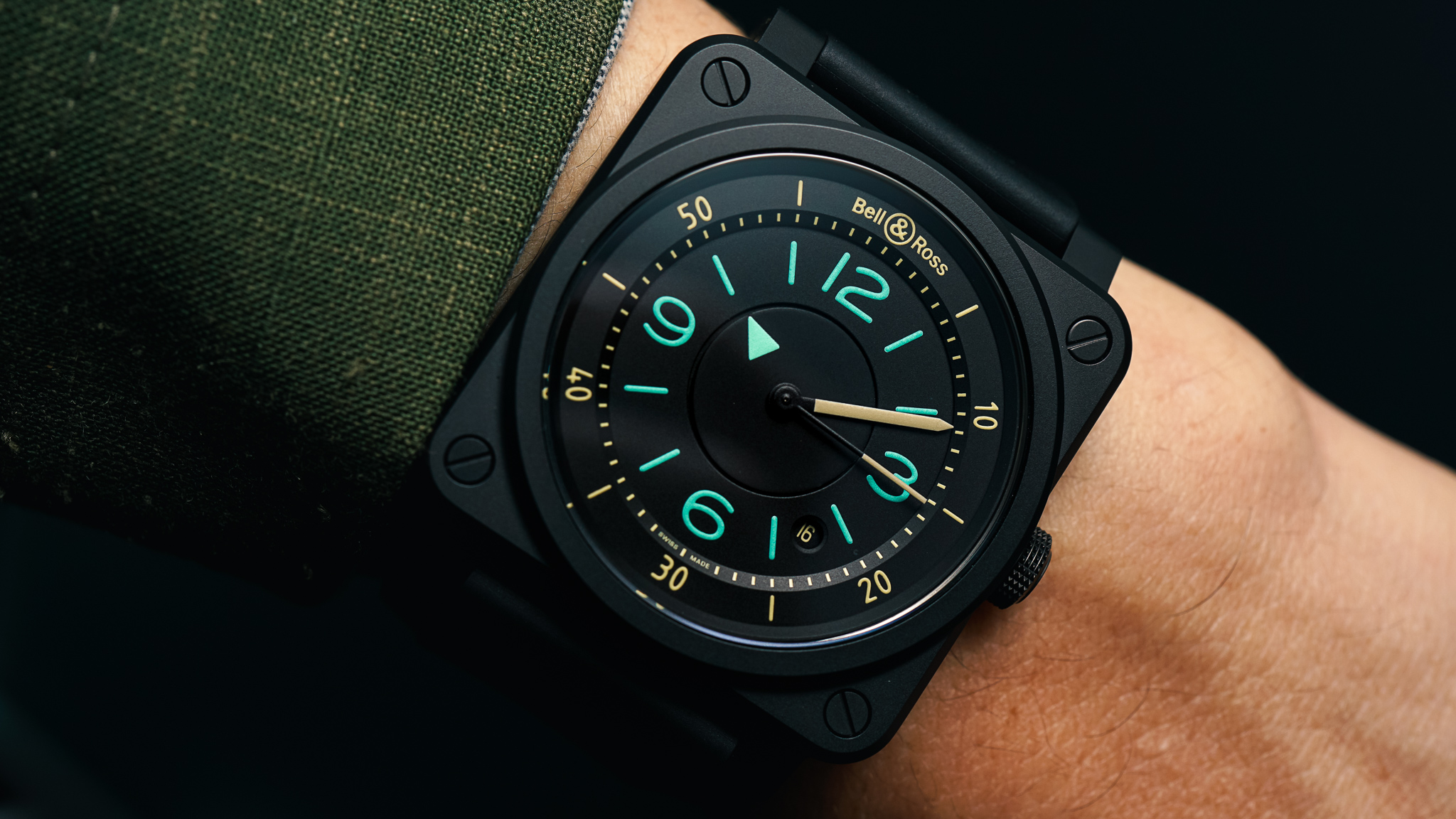 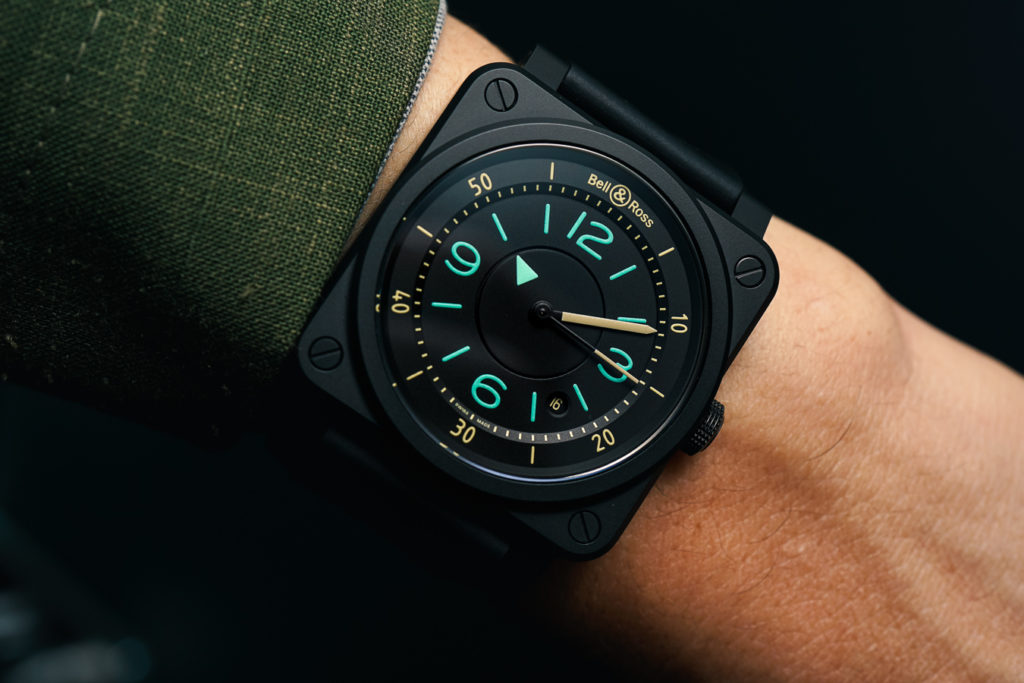 At the risk of borrowing a somewhat cliché, famous turn of phrase, it was Henry Ford who reportedly once said a customer could have a Model T painted in “any color he wants, so long as it is black.” Granted, the black watch might not be destined for the “everyman” as the Model T once was, but I’d also argue that when done right, the black watch occupies a much more permanent and important property in watchmaking than a passing fad, as many might have purported during the height of the DLC/PVD craze of the early aughts. It’s why I’d also argue that Bell & Ross doesn’t get enough credit for elevating the black-cased watch to an art form — because, as we’ve since learned, it takes a lot more than just PVD-coating a case to make something that is equal parts stealthy and low-key sinister, but as classic and easy-wearing as its stainless steel equivalent. Nowhere is this more evident than the French tool watchmaker’s latest addition to its 42mm square-cased line: the ceramic BR03-92 Bi-Compass, unveiled at Baselworld earlier this year.

Maybe it’s because aviation instruments are already traditionally rendered in black, but there’s something about Bell & Ross’ black instrument collection that’s always felt natural and effortless — as though these watches are black out of necessity, rather than vanity. And from what I understand, Bell & Ross is no longer using PVD or DLC coating on any of its cases anymore, so if you see a black-cased BR01 or 03, it’s ceramic. Such is the *ahem* case with the new BR03-92, which brings that super-matte instrumental aesthetic to a novel new time display, driven by the Sellita-based BR-CAL.302. Inspired by an aviation compass, the movement has been lightly modified to reduce the hour display to a luminous triangle on a rotating disc that orbits the center of the dial. In classic Bell & Ross fashion, all of the timekeeping information is simultaneously legible, but also neatly color-coded in the same tones of the source material: beige for the minute hand and rehaut, and bright green for the hour disc and hour markers. 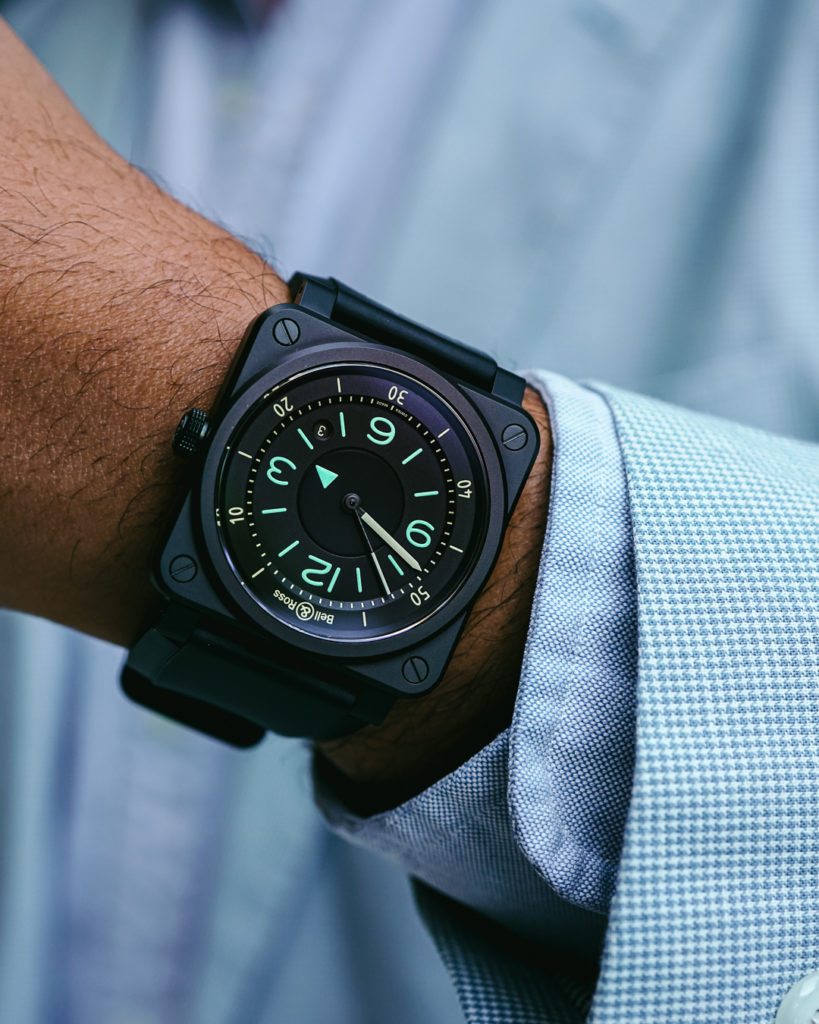 In the interest of preserving the square shape, all Bell & Ross instrument watches maintain short lug-to-lug measurements, relative to their respective case diameters — 46mm for the BR01 line and 42mm for the BR03 line. And while the former might be more classically Bell & Ross, it’s in the latter size that this case really sings. Thanks to its relatively thin bezel, the dial is stretched nearly the full width and breadth across the dial, so it feels like a “large” modern watch despite its compact wrist presence. And for being such a thin case, the BR03 maintains 100 meters of water resistance while nailing another detail usually left to the wayside in minimalist tool watches: depth and texture. 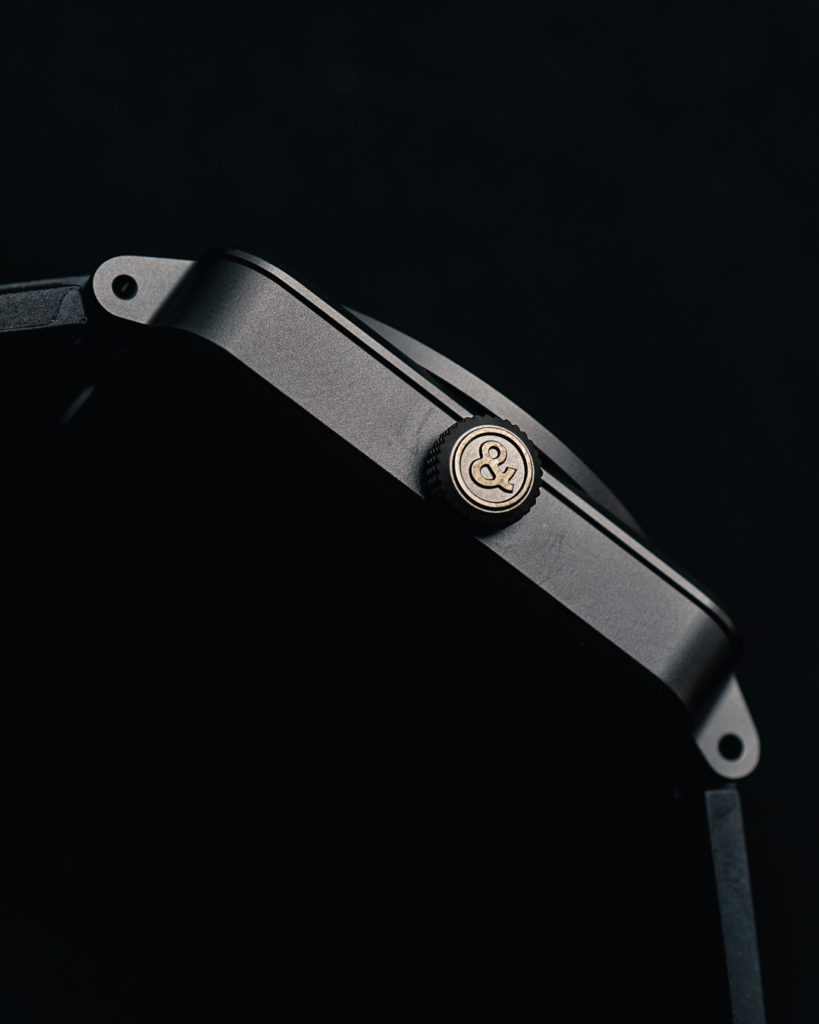 Starting at the edge of the bezel where the domed crystal meets the case, there’s a very short and steep rehaut that dives into the actual chapter ring, upon which the 10-minute markers are rendered in beige-colored print. The angled edge of this chapter ring is marked with single minute hashes as it slopes further inward towards the dial’s center, which is essentially the lowest of the three “floors” of the case. A small, circular date aperture is knocked out at 4:30, where the date disc is rendered in the same khaki-colored print as the chapter ring — a thoughtful touch, regardless of your stance on the inclusion of a date. 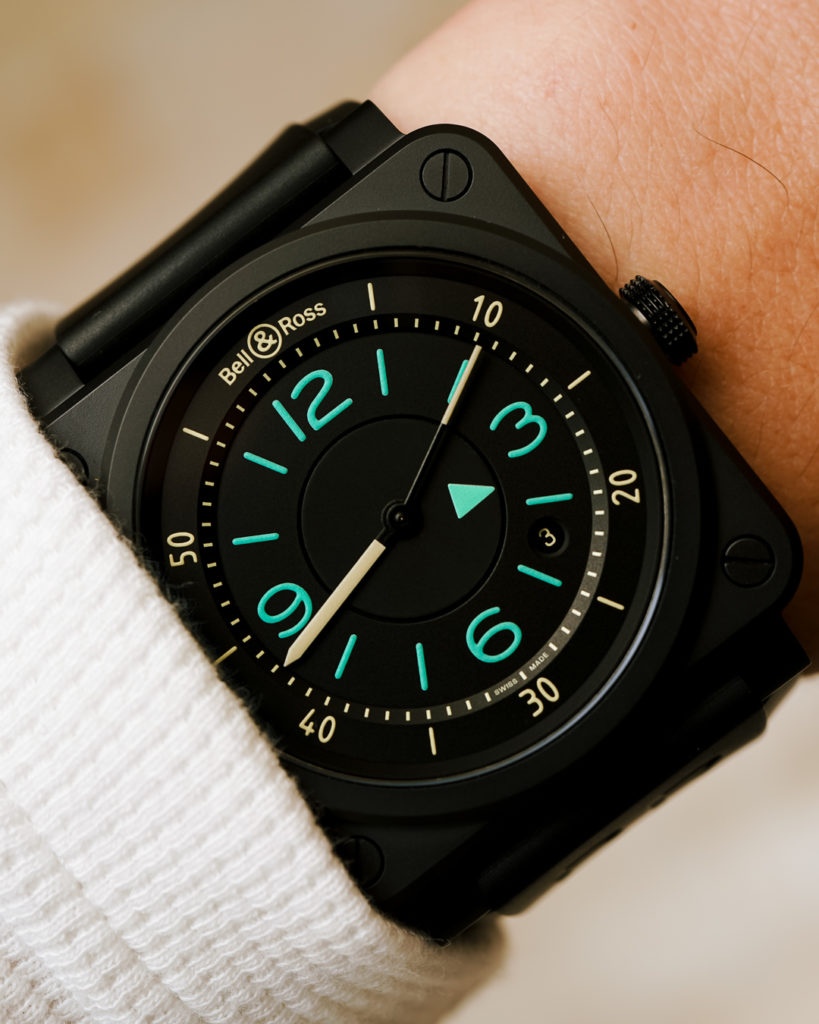 At a glance, the watch appears to be relatively flat and one-dimensional, but each of these layers — including the thin ring demarcating the inner rotating hour disc — adds an additional surface that punctuates the light and creates shadows in a different way, creating a far more three-dimensional appearance than one might expect from a printed dial that has one less layer in its hand stack. In an era of watchmaking where “design” usually amounts to digging up old blueprints and digitally scanning something from the archives, it’s great to see a design-centric brand like Bell & Ross continue to find clever ways to subtly iterate on a central theme to create watches that are as fun to look at as they are to wear. 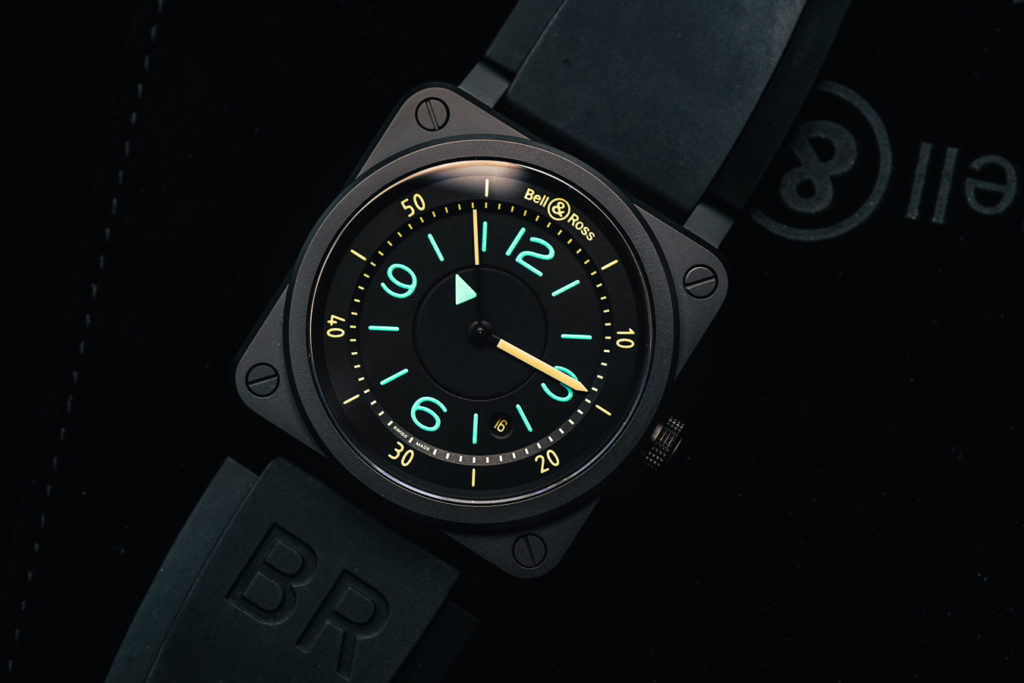 As we’ve reported before on models like the R.S. 19 race team collection, Bell & Ross has some pretty striking, highly complicated offerings like the BR-X1, but it’s pieces like this BR03-92 on the polar opposite of the range where the brand really seems to feel most at home in its own minimalist design language. Like the cockpit instruments that inspired them, these are tools with minimal ornamentation, designed to communicate information in a clear, legible, and unfussy way. And if you’re a watch or aviation enthusiast, they communicate that information in a pretty novel way as well. The price of the BR03-92 Bi-Compass watch in ceramic is $3,900. For more information on this, and other Bell & Ross pilot watches, head over to bellross.com.