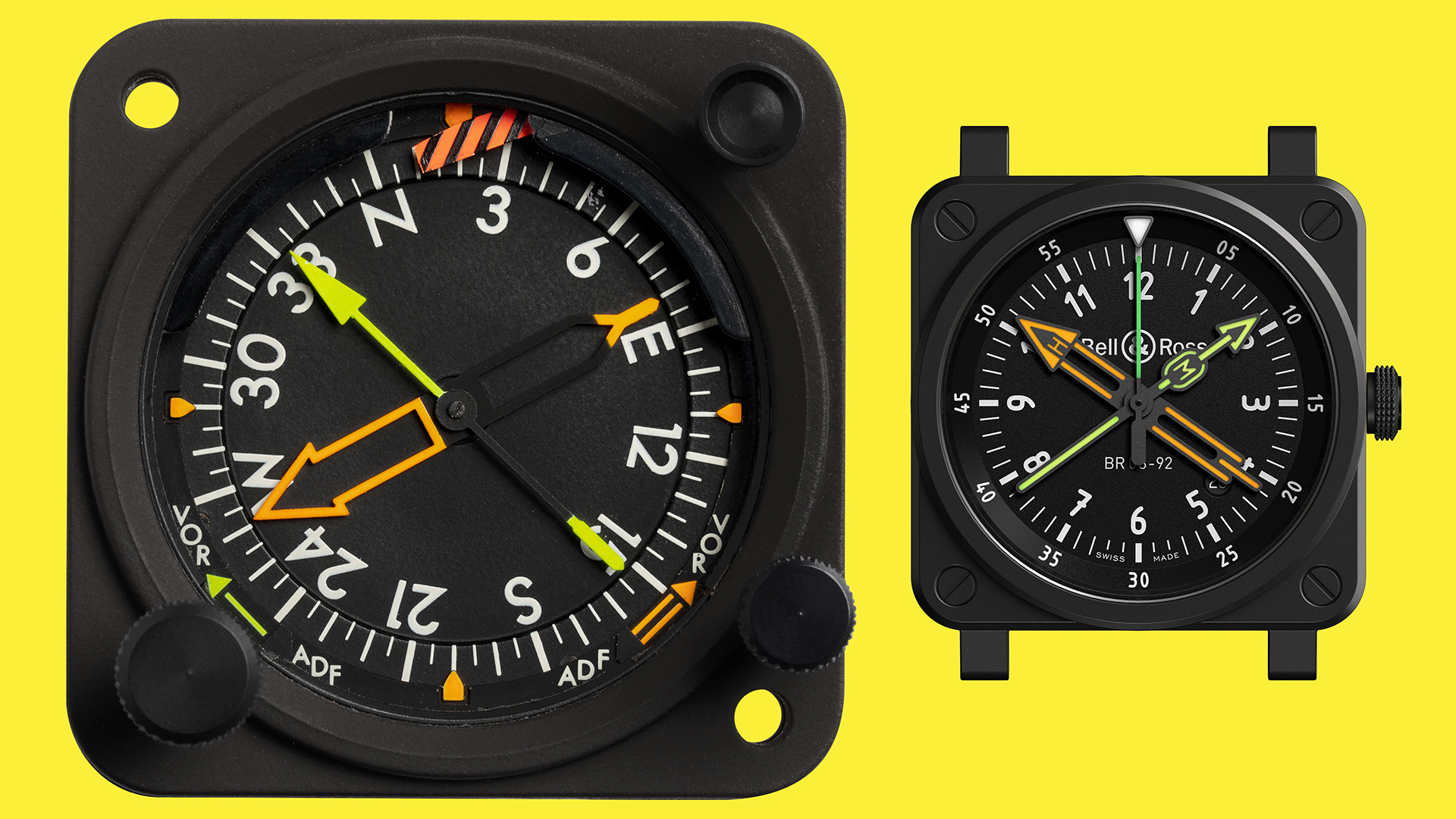 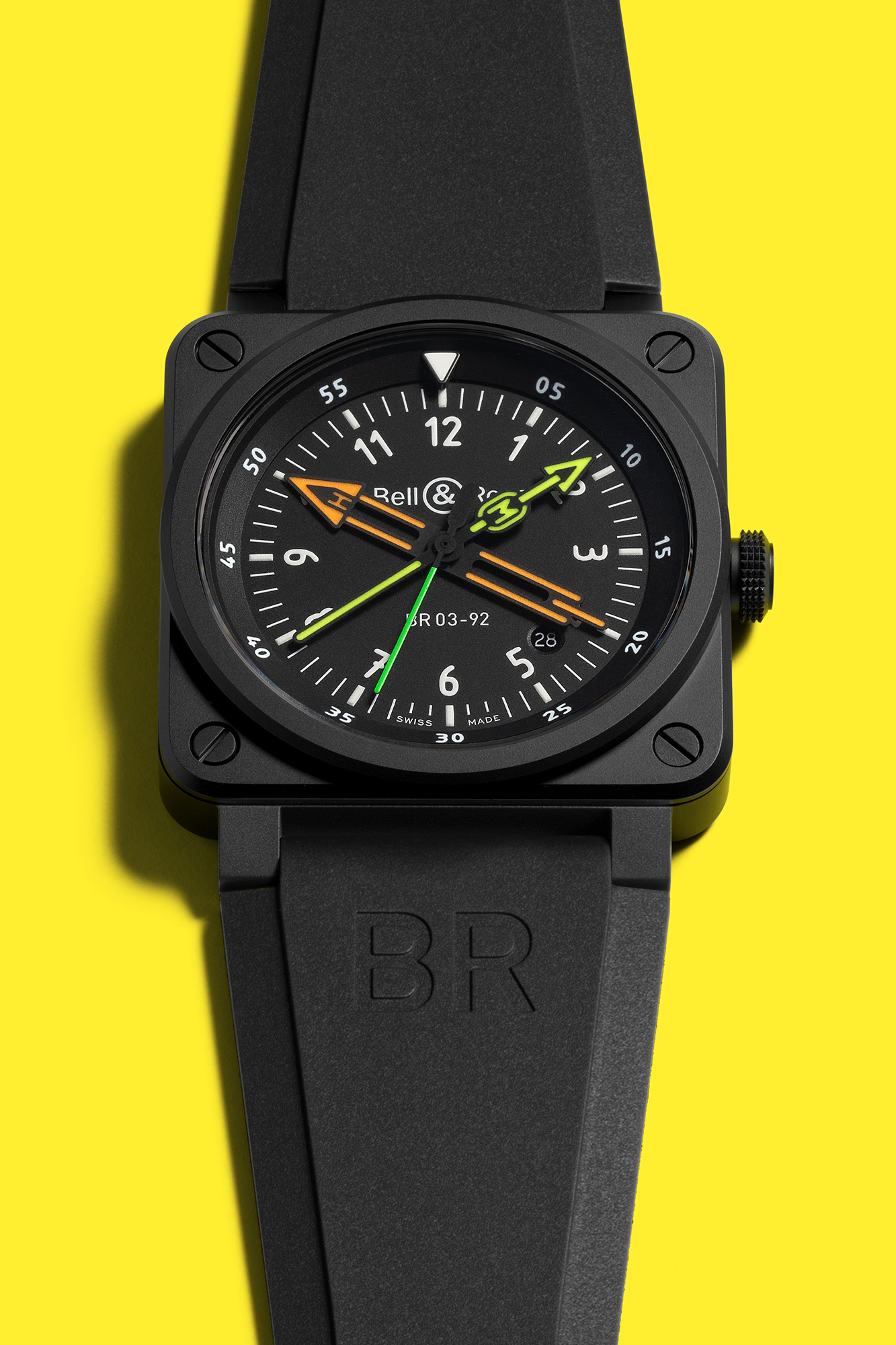 Although the brand’s lineup has expanded far beyond this central concept, cockpit instrument-inspired designs still form the core of Bell & Ross’s creative philosophy. Over the years, these aviation gauge-style timepieces have run the gamut from slightly stylized takes on classic pilot’s watch cues to truly wild, inventive statement pieces. The brand’s latest release undoubtedly falls into the latter category, with a graphic, colorful, and wildly unorthodox layout inspired by the radio compass, a beacon-guided navigation tool used by jet pilots to determine their direction and location in poor visibility. The new limited edition Bell & Ross BR 03-92 Radiocompass offers one of the brand’s most dramatic, colorful, and memorable cockpit-inspired designs to date. 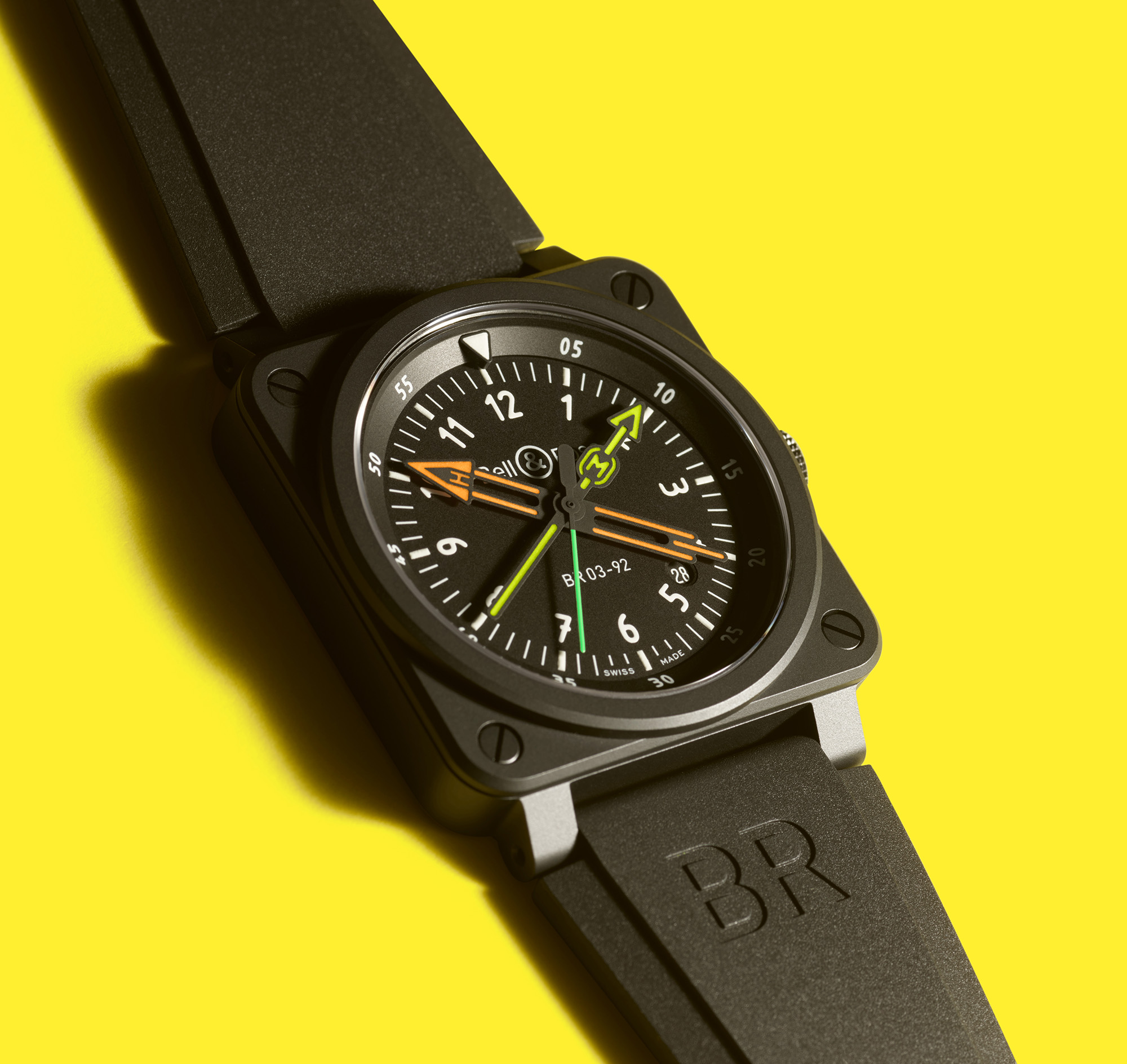 The Bell & Ross BR 03-92 Radiocompass’s 42mm-wide matte black ceramic case is carried over from the rest of the BR 03-92 line. Like the rest of the series, this rounded-square form plays off the look of an aircraft cockpit instrument housing, and should give the watch a bold stance on the wrist. The short, steeply sloping wedge-like lugs should help to mitigate lug overhang, however, and keep visual focus squarely on the main case body in images. While the overall form may be simple, Bell & Ross elevates the design in images with considered touches like the heavily knurled crown, the even chamfer ringing the upper edge of the case, and the symmetrical position of the case top screws. In keeping with the aggressive style of the watch, Bell & Ross rates the BR 03-92 Radiocompass for a respectable 100 meters of water resistance. 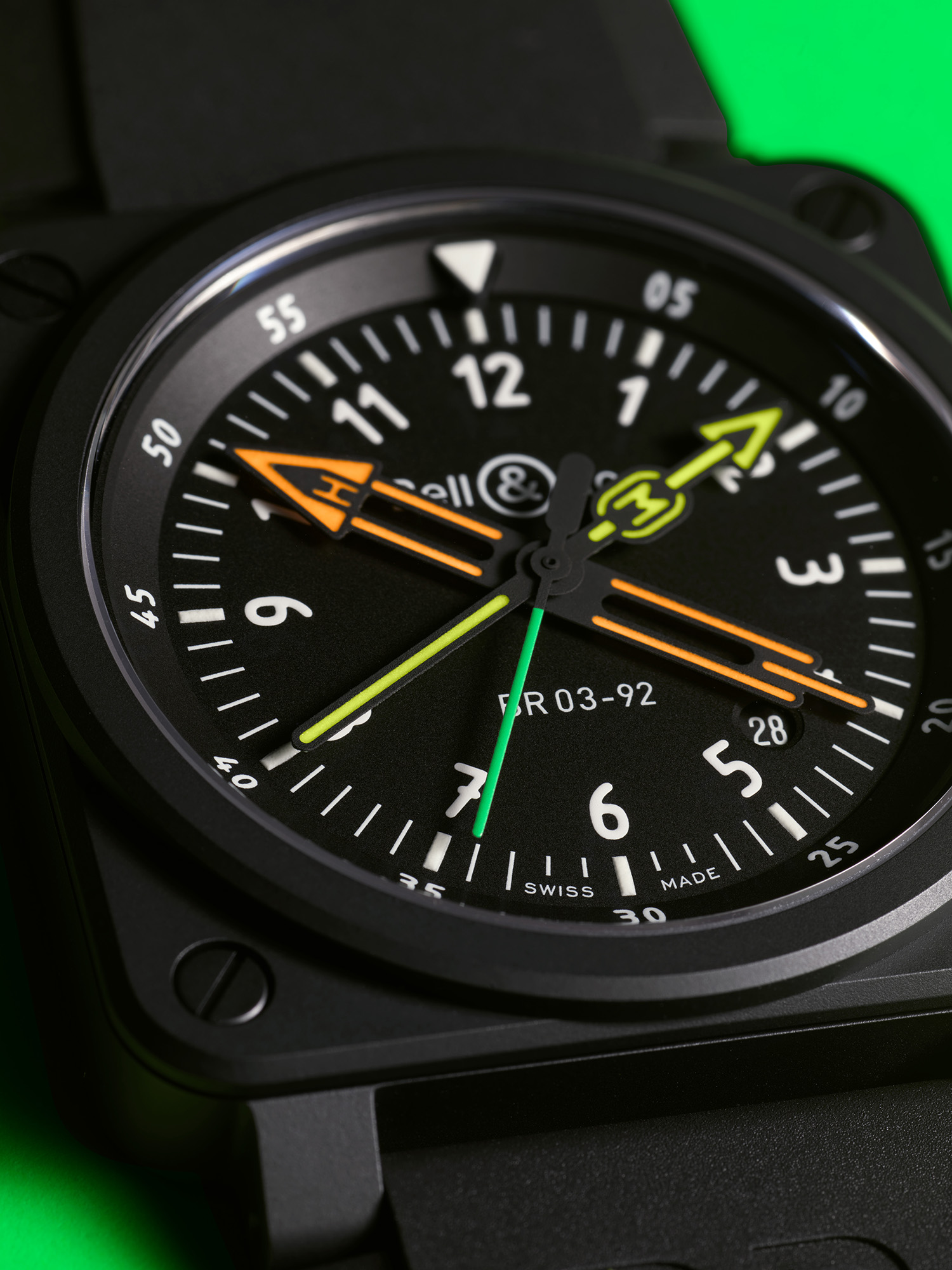 With its bright colors and wildly stylized handset, the dial of the Bell & Ross BR 03-92 Radiocompass might take a moment of acclimation in images to read the time. The base dial layout is simple and ultra-legible, with a bold, clean minutes scale and printed Isonorm Arabic numerals. In keeping with the design’s navigational inspiration, however, both the hours and minutes numerals are “targeted,” with a gradually rotating orientation around the dial rather than each numeral aligning with the 12 o’clock axis. This shifting orientation may take some adjusting to for wearers, but the most striking and stylized elements here are by far the BR 03-92 Radiocompass’s hands. Both the hours and minute hands feature counterweights that extend equally as long as the hands themselves, although broad arrow tips help to differentiate which end is which at a glance. Likewise, both the skeletonized orange-lumed hour hand and the narrower yellow minutes hand feature bold “H” and “M” labels respectively, to further alleviate the confusion in images. The vibrant lime green needle seconds hand is far more conventional by comparison, but adds a third bold color to the layout that reinforces the aircraft-instrument feel here. Bell & Ross’s signature rounded cutout date window at 4:30 integrates smoothly into the overall design, keeping disruption of the dial layout to a minimum. Taken as a whole, the BR 03-92 Radiocompass’s dial will likely prove divisive among some enthusiasts, but it does expand upon the brand’s core aviation design philosophy in an intriguingly dynamic way. 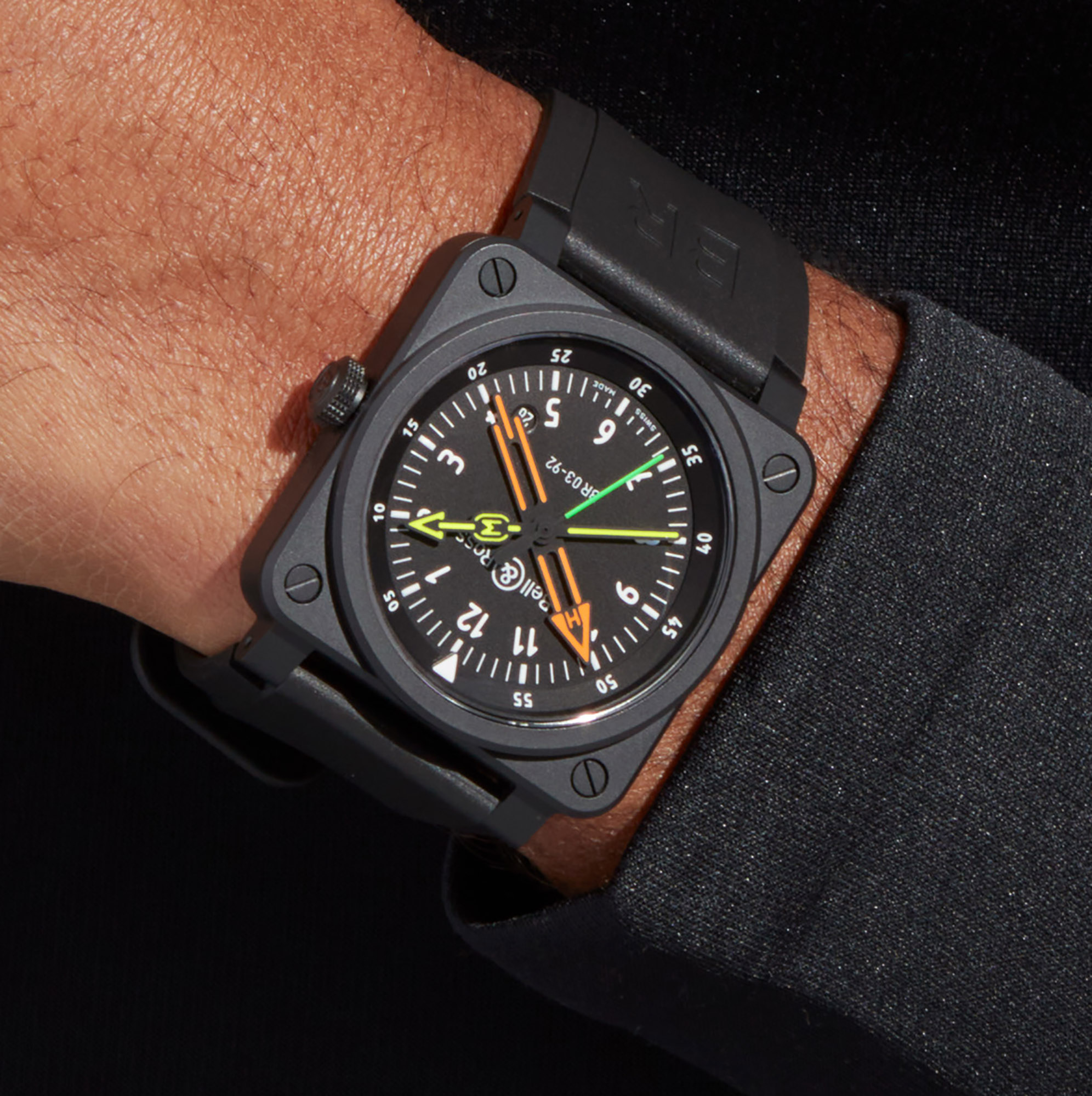 Bell & Ross equips the BR 03-92 Radiocompass with the Sellita SW300-1-based BR-CAL.302 automatic movement. The BR-CAL.302 is a long-serving staple of the brand’s lineup, and while it does provide reliable performance the base platform is beginning to show its age somewhat. In particular, the 38 hour power reserve at a 28,800 bph beat rate feels distinctly underwhelming when measured against some of its competitors. Bell & Ross completes the watch with a broad tapering strap in sculpted black rubber for a sporty, modern look in images.