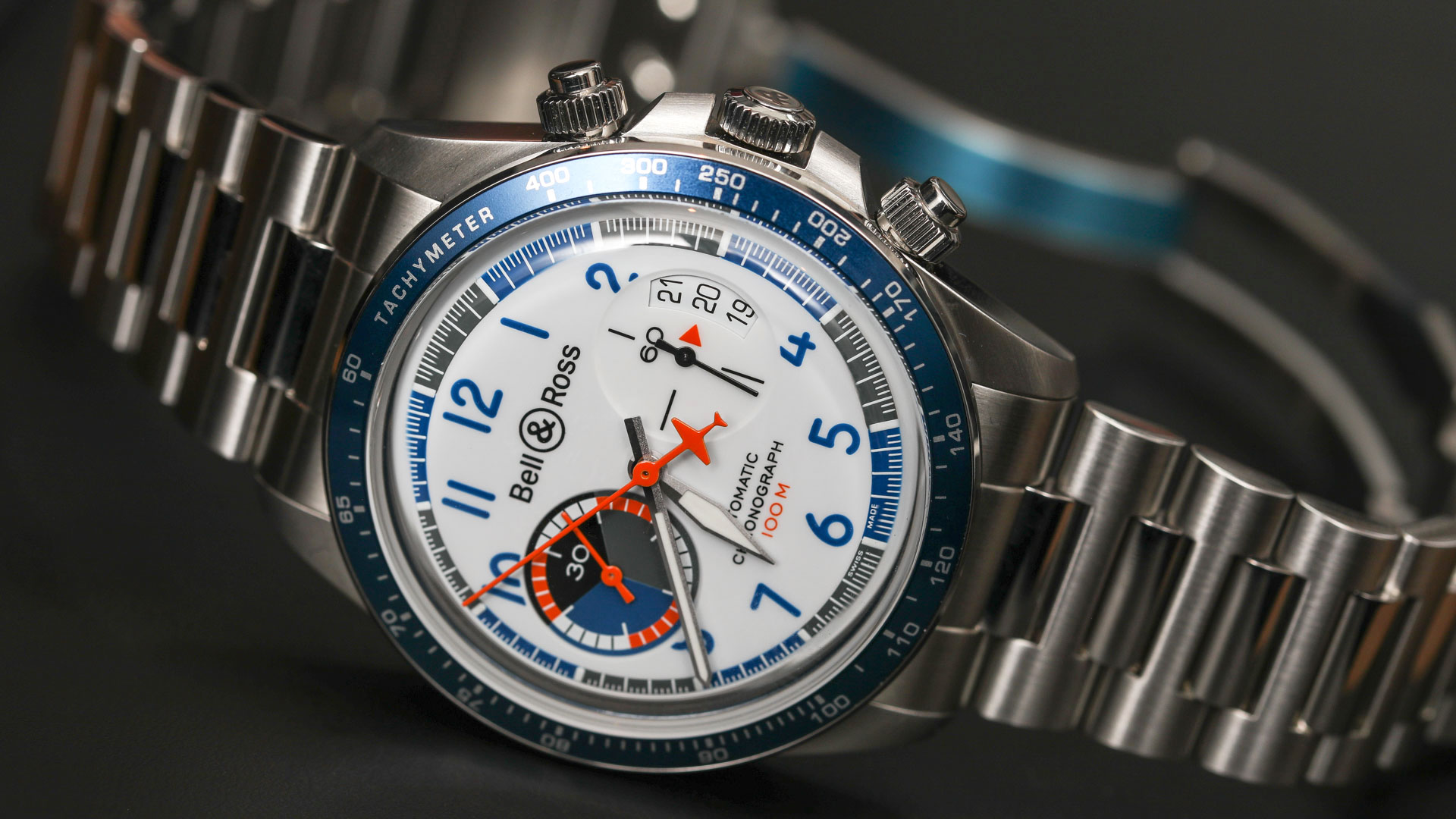 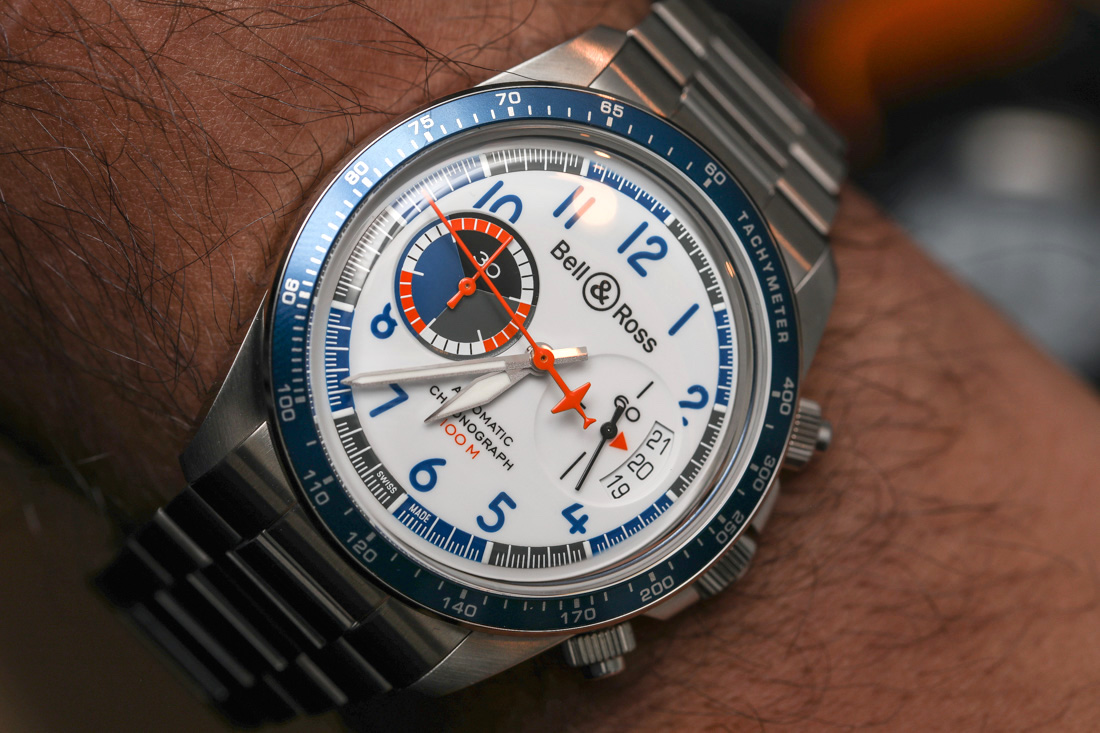 After designing both a race car and a motorcycle in concept, Bell & Ross designers have turned to the skies for the latest challenge – but this time, to design an aircraft capable of actually competing in the Reno Air Races in record-breaking style. Why? To serve as inspiration for a watch collection, of course – because if surrounding heritage or inspiration isn’t enough, one must resort to conjuring it out of thin air. Now, when it comes to marketing budget expenditures, The Racing Bird airplane is probably as much of a gimmick as there’ll ever be. But I’ll be honest, it’s still an extremely cool one, and one that (thankfully) has also yielded an equally cool watch, the Bell & Ross BR V2-94 Racing Bird Chronograph (along with its sibling three-hand BR V1-92 Racing Bird). 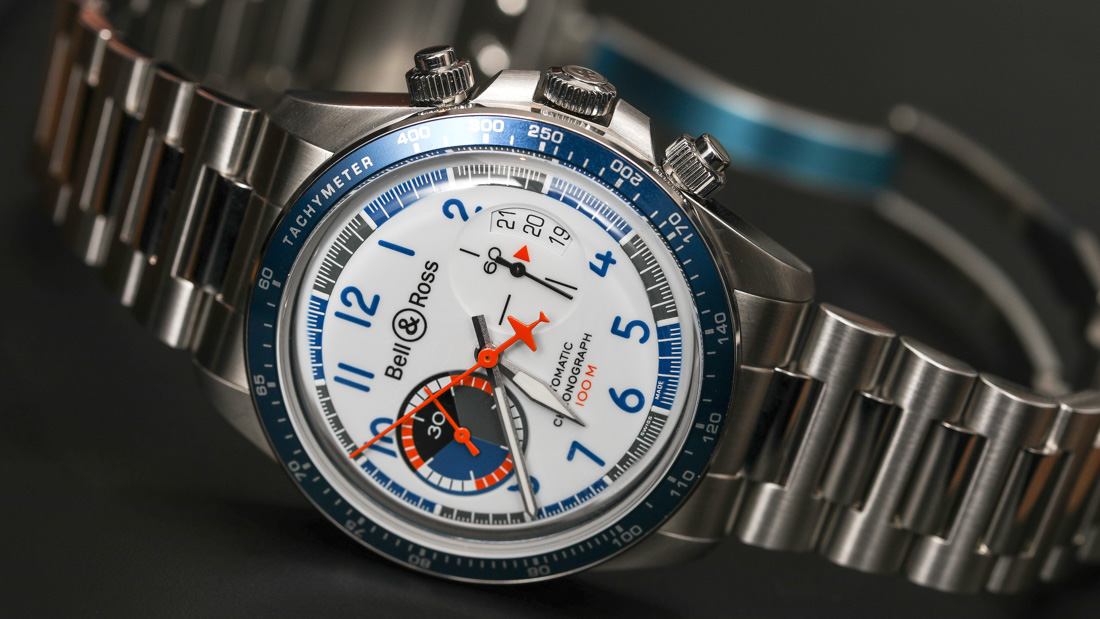 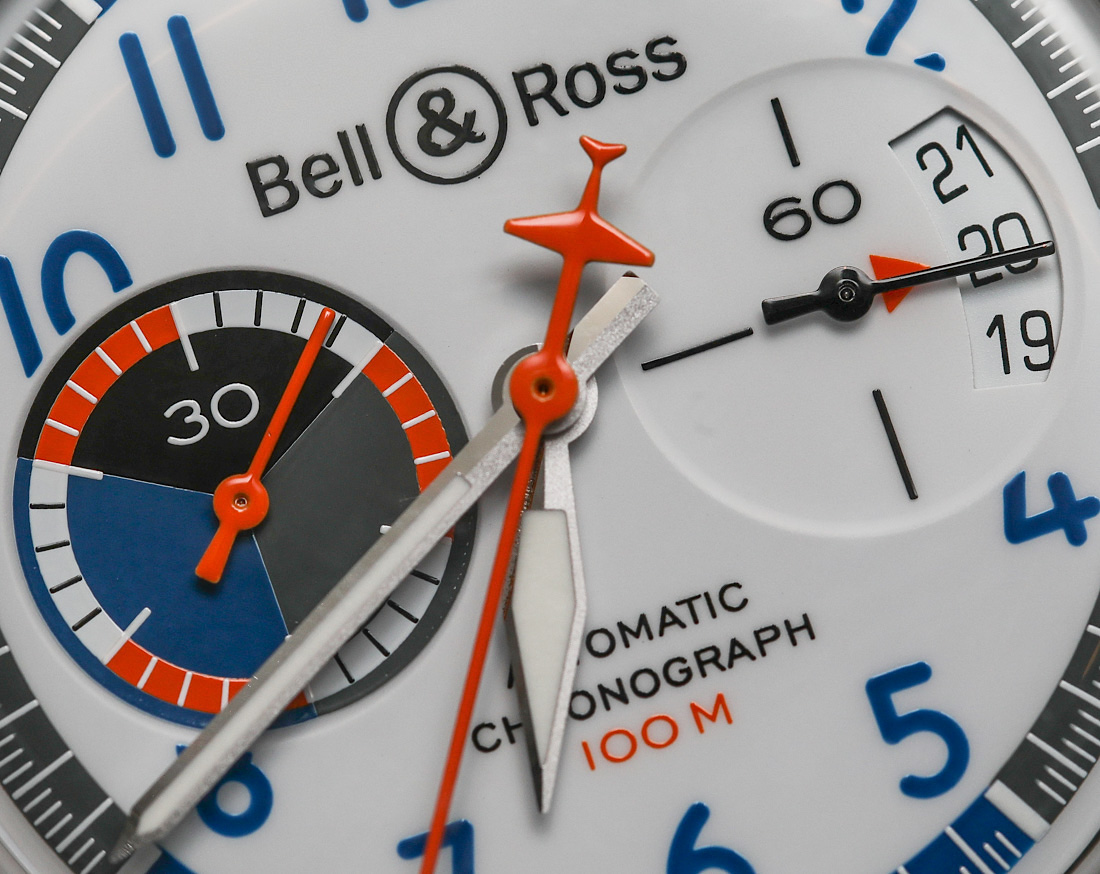 That’s the one thing I’ve always liked about Bell & Ross: the brand seems to make no effort to hide behind the fact that its designers – not its heritage (or lack thereof – the brand was founded in 1992 after all), or its association with some famous ambassador or military group is its strongest asset. And when the designers design, and the watchmakers make watches (i.e. both parties simply do what they are best at), watch fans win. The Racing Bird is a wonderful example of this. Granted, in mechanical design it’s not dissimilar to the V2-94 Bellytanker or the V2-94 Garde-Côtes models from previous years, but that’s fine. What we’re essentially looking at here, is a palette swap, albeit an extremely effective one inspired by an actual working propeller-powered aircraft that Bell & Ross designed. 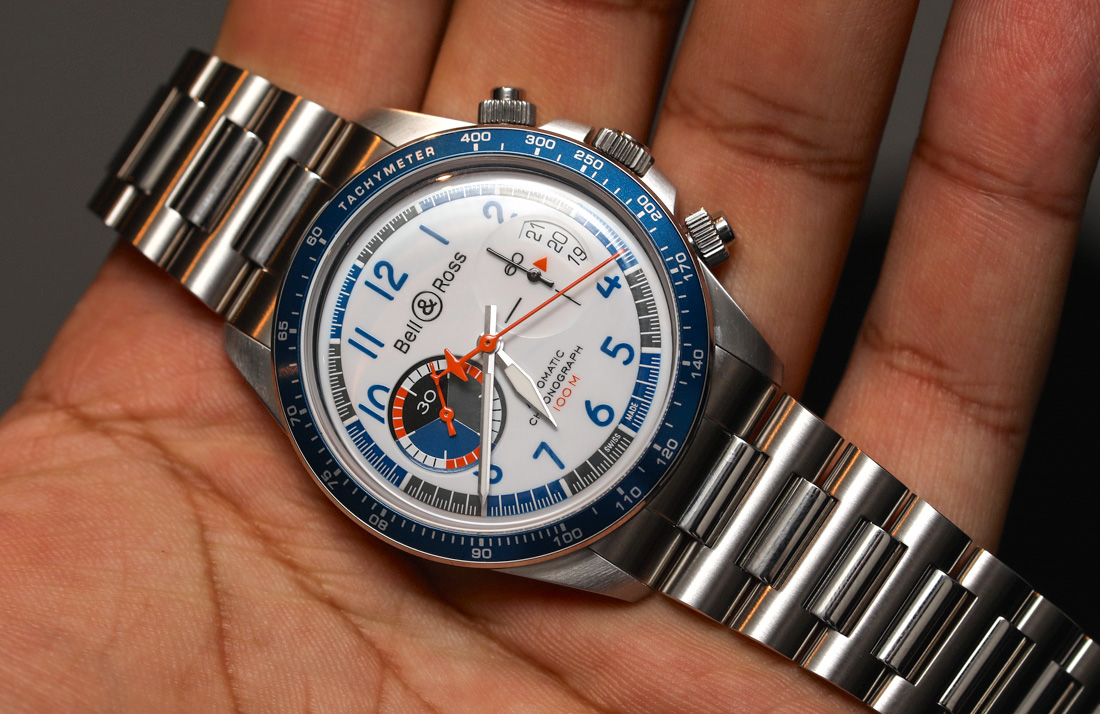 As suggested, the V2-94 Racing Bird draws from Bell & Ross’ successful ‘vintage’ line. However, remember that there’s little about Bell & Ross that could even be considered ‘vintage’ as the brand is still a child of the nineties. But that hasn’t stopped its designers from taking cues from classic sports watches for this collection, with hallmarks like conservative 41mm case dimensions, domed sapphire glass lenses, screw-down crown & pushers, and 100m of water resistance. Despite (or perhaps, in spite of) sharing all those characteristics, as well as the same case and movement with both the Bellytanker and Garde Côtes, the Racing Bird is the first in the series that feels like a truly new watch – and that’s a very good thing. 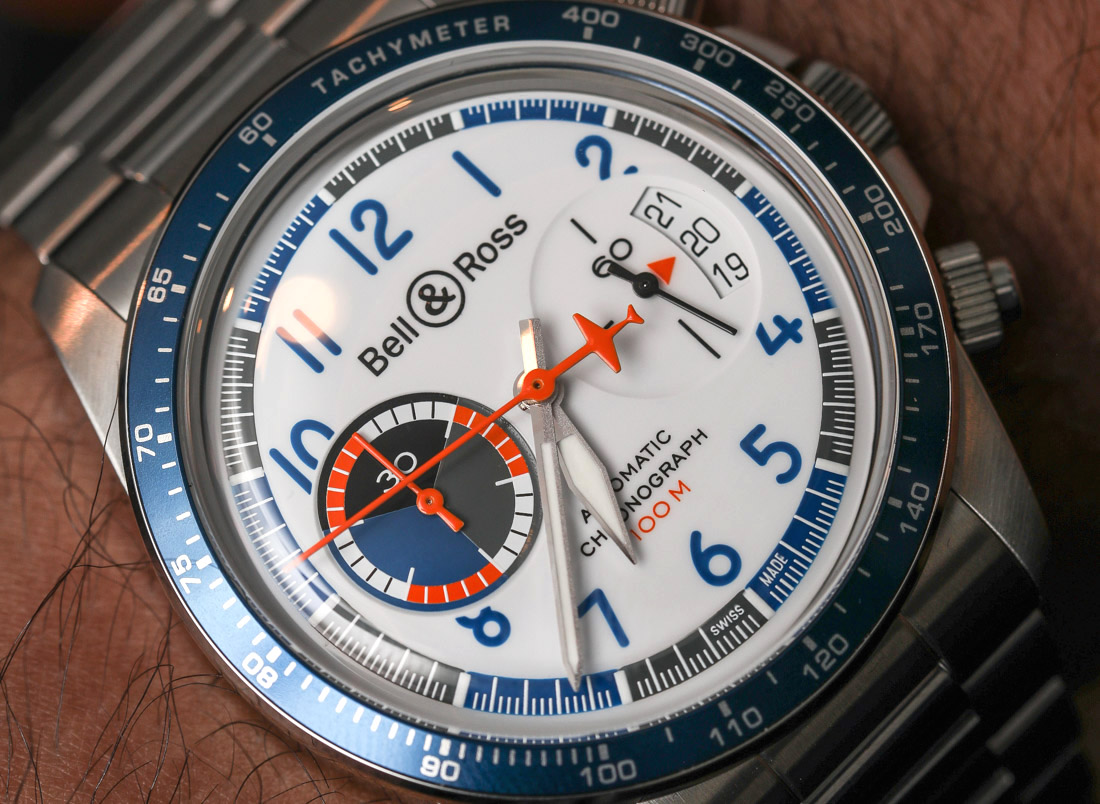 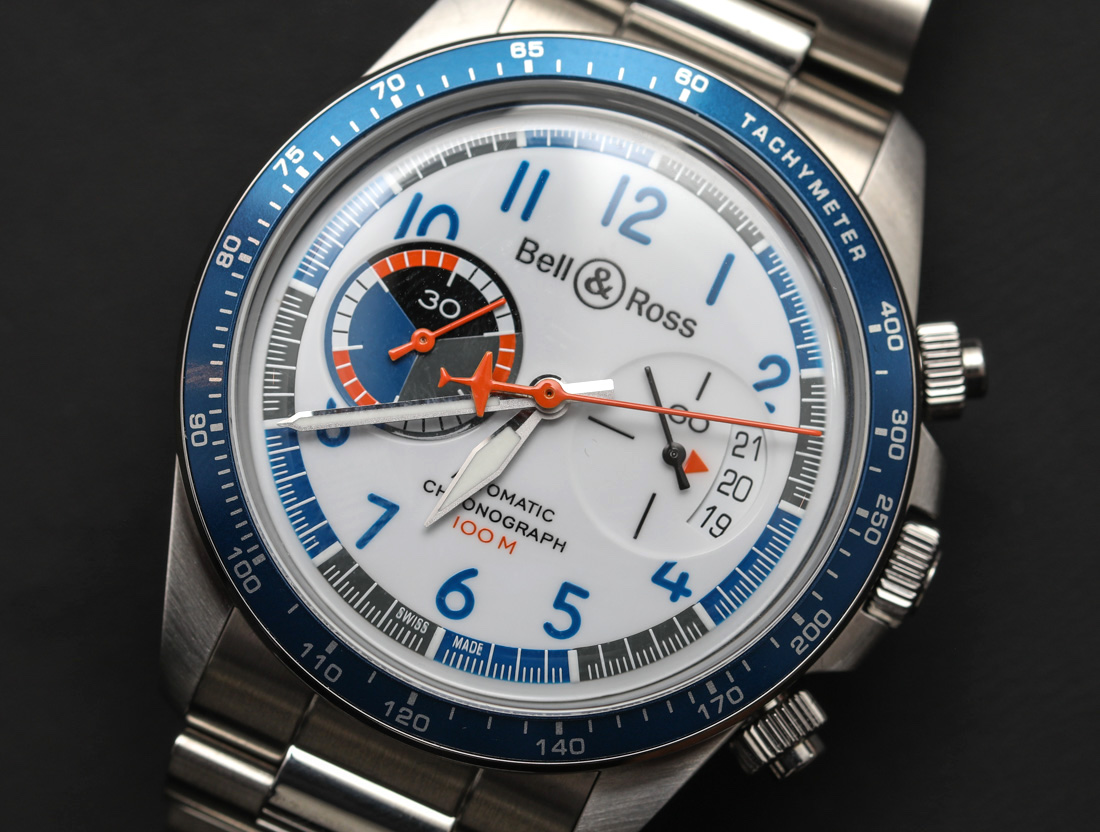 I much prefer the Racing Bird chronograph over its three-handed counterpart, whose dial feels more than a bit empty and lacking in the character found all over the chronograph variant. Here, the V2-94 feels sporty and fresh, with its milky white dial designed to evoke the fiberglass shell of the plane, contrasted by quick strokes of orange, and a deep blue anodized tachymeter scale and blue dial accents – just like on the Racing Bird’s hull and tail. It’s arguably what the Tudor Heritage Chronograph should have been, had the latter not been condemned to repeat the more conservative livery from its source material line for line. 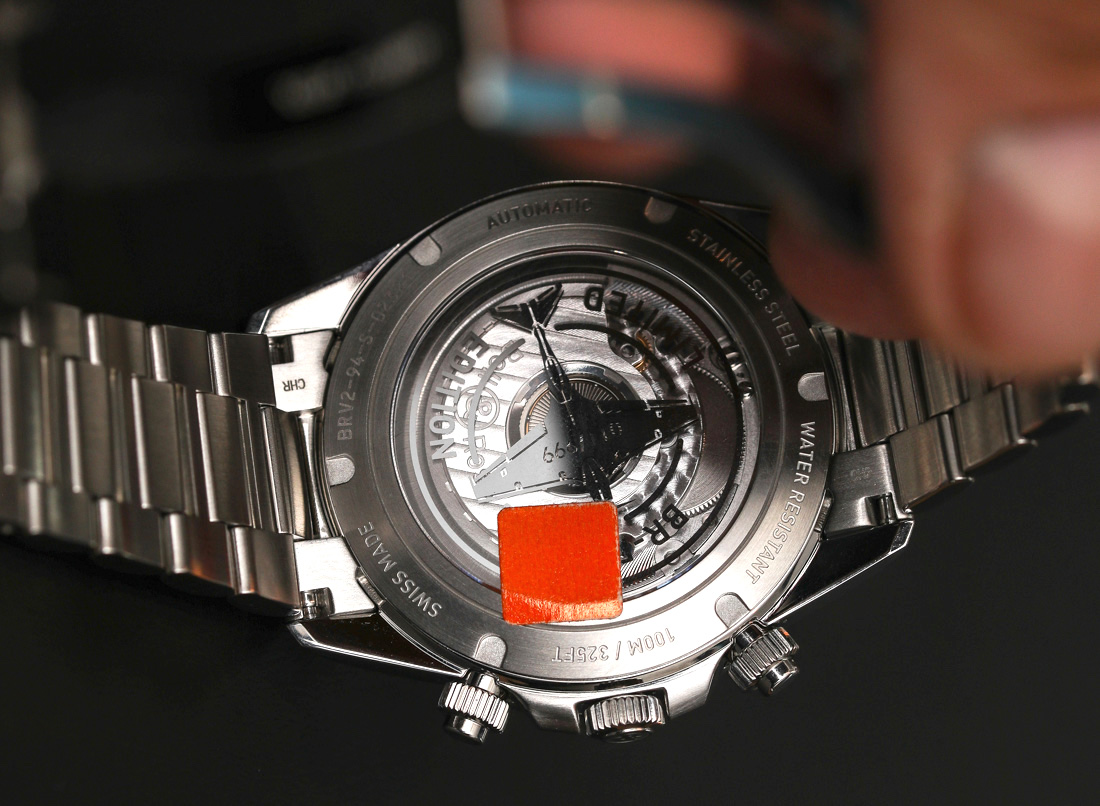 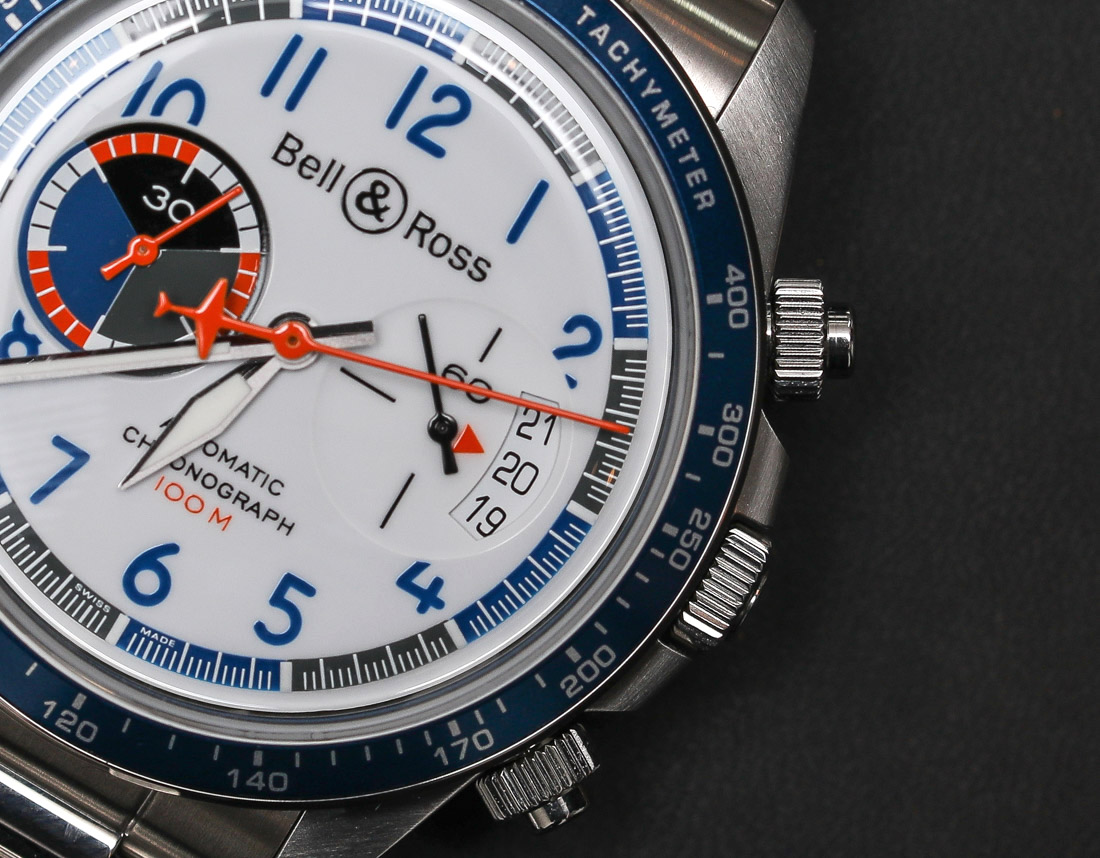 Unlike the single-seat Racing Bird aircraft, which is powered by a V12 Rolls Royce Falcon engine, the V2-94 uses the humble BR-Cal. 301, which is essentially a modified Sellita SW300-1 – an automatic chronograph movement with a 30-minute counter at 9:00, a center-mounted chronograph seconds hand (nicely accented by an orange Racing Bird silhouette counterweight), and a running seconds counter at 3:00. Oh, and perhaps the watch’s most divisive feature, an altimeter-inspired date aperture camouflaged just inside the 3:00 register. It’s actually a pretty clever integration, and one that’s apt to get missed at first glance as the numbers appear as though they could be part of the counter itself. But then you might notice they’re not concentric with the rest of the register’s circular shape, at which point, if this bothers you, you’re likely to un-see it for as long as the Racing Bird is on your wrist. 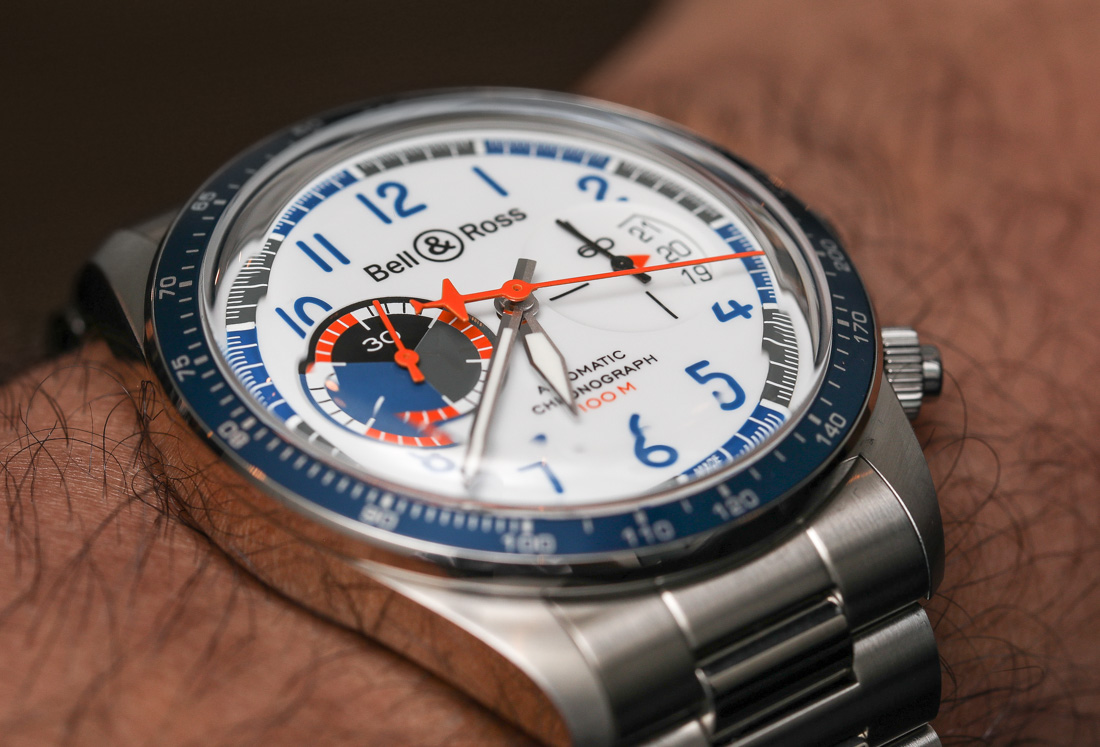 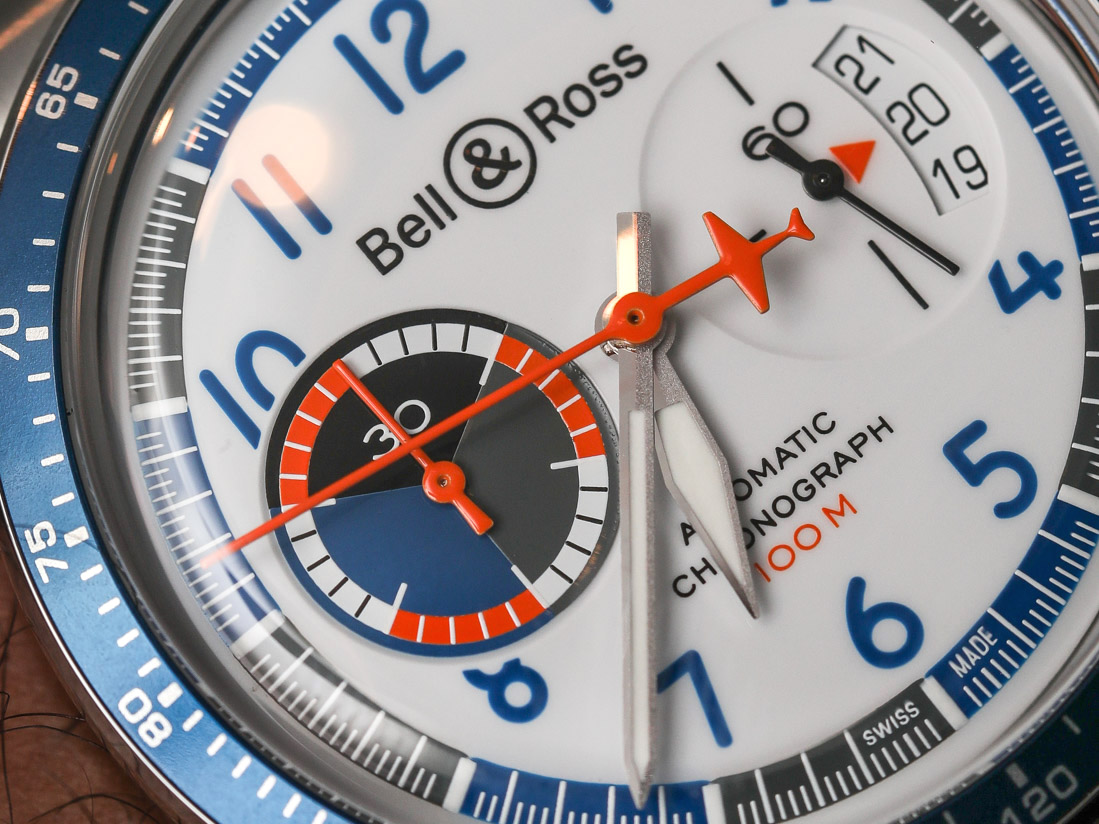 When it comes to modern chronographs, comfort is rarely the name of the game, but Bell & Ross has done a wonderful job keeping the proportions of the V2-94 eminently wearable in both height and overall length. In fact, it doesn’t feel too far off in size and wrist presence from one of the most markedly wearable and iconic chronographs of our time – the Omega Speedmaster Moonwatch. 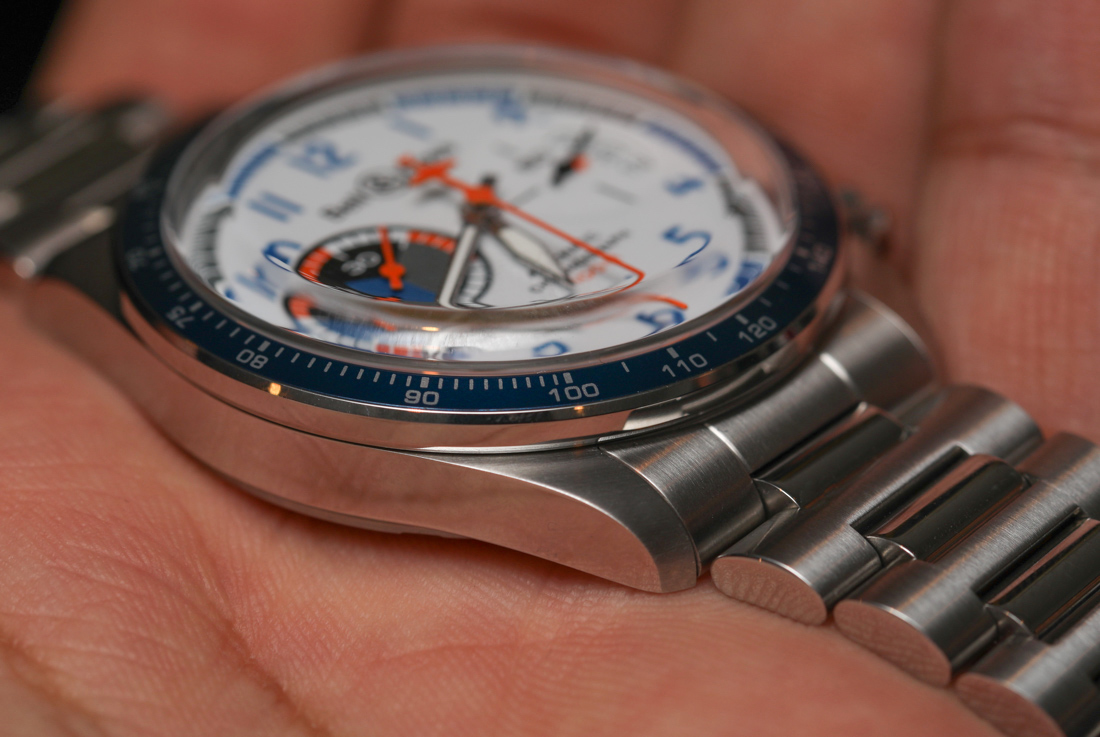 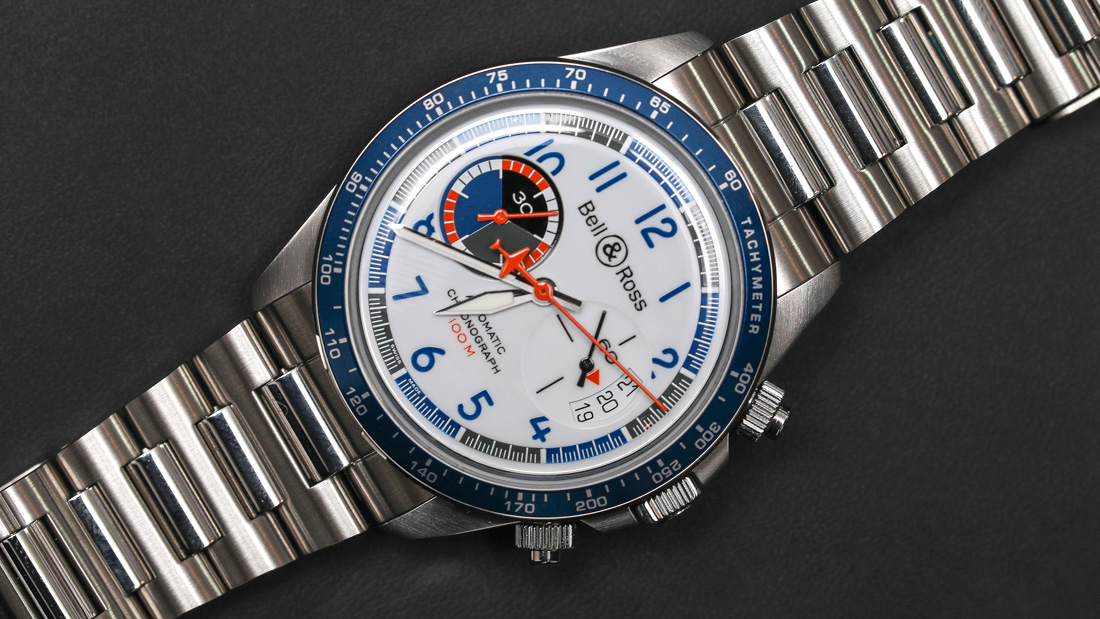 Whether or not the color of the Racing Bird is to your taste is another question – while it does indeed feel fast and fresh like summer, those looking for something a little more classical (because summer sadly has an expiration date every year) might seek out the standard V2-94 models – thankfully, there are a few others to choose from. For the rest of us, the Bell & Ross V2-94 Racing Bird Chronograph has a starting price of $4,400 on a strap, and $4,700 on a bracelet, and is limited to 999 pieces. bellross.com