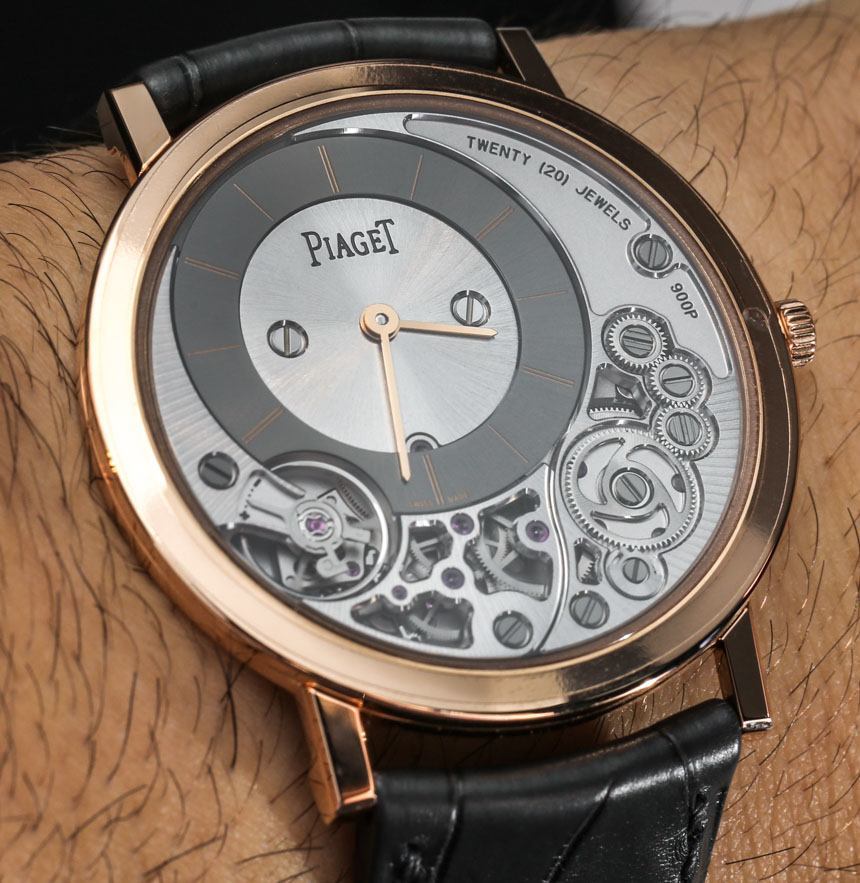 At SIHH 2014, the Swiss watch maker Piaget introduced a new watch model called the Piaget Altiplano 38mm 900P (debuted here), which set a new record for the thinnest mechanical watch in the world. With a total case thickness of just 3.65mm, the Piaget Altiplano 900P attempted to once and for all end the fight of what prestigious watch maker would produce an impossibly thin mechanical movement and case. For now, Piaget has won, and I have a feeling it is a title they will hold for quite some time.

As fashion trends come and go, in the category of haute horological couture, “thin is in,” at least when it comes to case thickness. A few years ago, watch makers attempted to bring back the “small” watch for men with narrower diameter timepiece cases. I predicted that such a trend was short-lived, and for the most part, I was correct. While you saw a contraction of some 45mm plus watch sizes, the 38mm and under watches brands attempted to promote simply did not catch on. As I have continued to maintain, most men prefer a watch diameter size of between 40mm – 42mm wide. Some, of course, like even larger watches. I discussed the fact of why watch sizes are “so large” in depth here. So, while narrow watches never took hold, “thin” – in regard to thickness – watches have been vividly embraced by collectors interested in elegant timepieces. 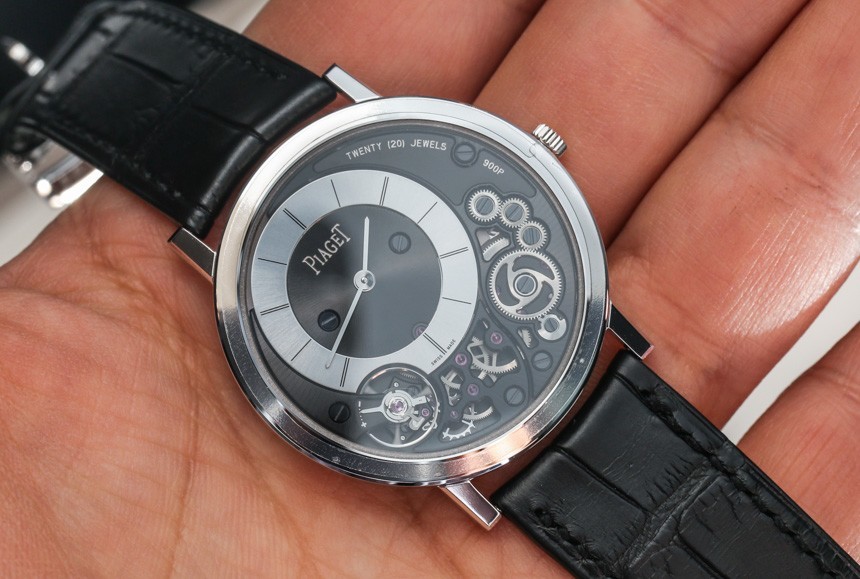 The trend of heightened interest among collectors and consumers for thin watches has been very fortunate for Piaget – a brand who, for many decades, has excelled and creating some of the thinnest watches around. In the late 1950s and 1960s in particular, Piaget along with some other high-end Swiss watchmakers competed with each other to produce thinner and thinner movements, to the delight of watch lovers everywhere. A few years ago, I visited the Piaget watch manufacture and discussed some of Piaget’s heritage of producing thin mechanical movements, as well as some of the interesting technical challenges related to designing and assembling an extremely thin watch. Fascinating complexities that no doubt apply to the Piaget Altiplano 900P as well.

I recall first writing about the Piaget Altiplano 900P about one year ago, before I had actually see the watch in person. During my review of the technical specifications, I became slightly annoyed, thinking, “why can’t I find the name of the movement, and why can’t I find the thickness of just the movement in comparison to the overall thickness of the case!?” These were reasonable questions, only to be answered by the fact that, unlike most watches which have a movement which is then cased, the Piaget Altiplano 900P’s movement is actually integrated into the caseback piece of the timepiece’s construction. 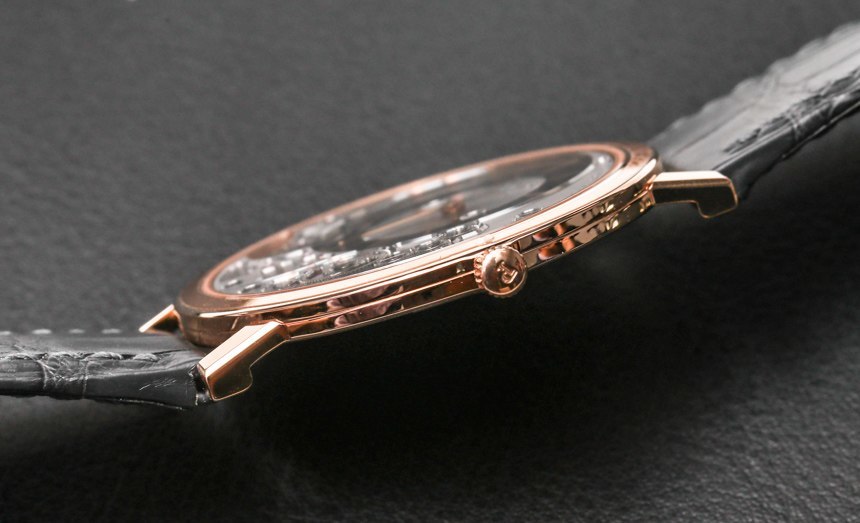 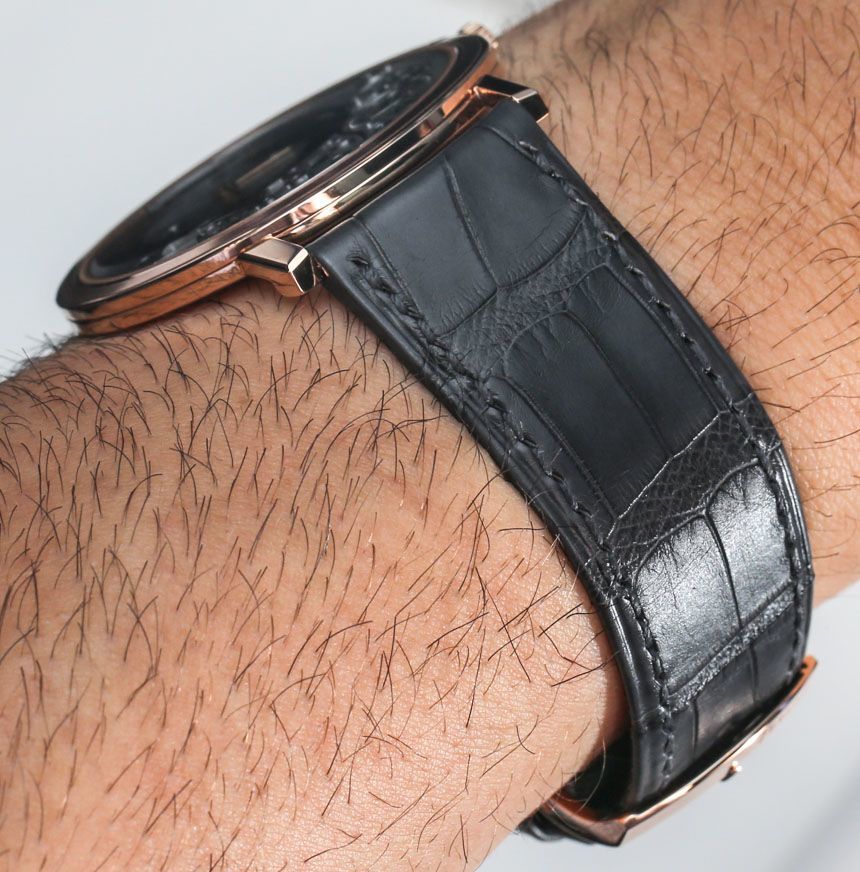 In order to save as much space as possible, Piaget’s watch designers cleverly removed the distinction between movement plate and caseback, uniting them, and thus saving considerable space. In the 1960s, the now legendary Piaget 9P movement was just 2mm thick, and now the Piaget Altiplano 900P watch is just a hair above 3.5mm thick, and that includes the rest of the watch. The engineering feat is remarkable, and anyone with a mind for moving objects will appreciate the miniscule tolerances involved in the precision production necessary for each of the movement components. You can further appreciate how careful Piaget watchmakers must be in assembling each Piaget Altiplano 900P watch so that they properly work. Many of today’s more mainstream mechanical watches are growing in size. This is a function of the fact that larger-sized timepieces are more popular, but it also makes it considerably easier to assemble movements, because certain parts can “moved around a bit” more in the space of the movement.

Speaking of movements, the Piaget Altiplano 900P mechanism is produced from 145 parts and features just the time on an off-centered dial. The manually-wound movement has a power reserve of about 48 hours – which is impressive, given the thin nature of the mainspring barrel. When looking at the dial of the Piaget Altiplano 900P, you are really looking at most of the movement itself. Visible is the oscillating balance wheel as part of the regulation system, as well as much of the gear train. You can also see the winding system gears moving as you turn the crown to wind the watch. Thus, not only is the watch incredibly thin, but it offers a delightful view of the movement for those who consider themselves mechanically-inclined voyeurs. 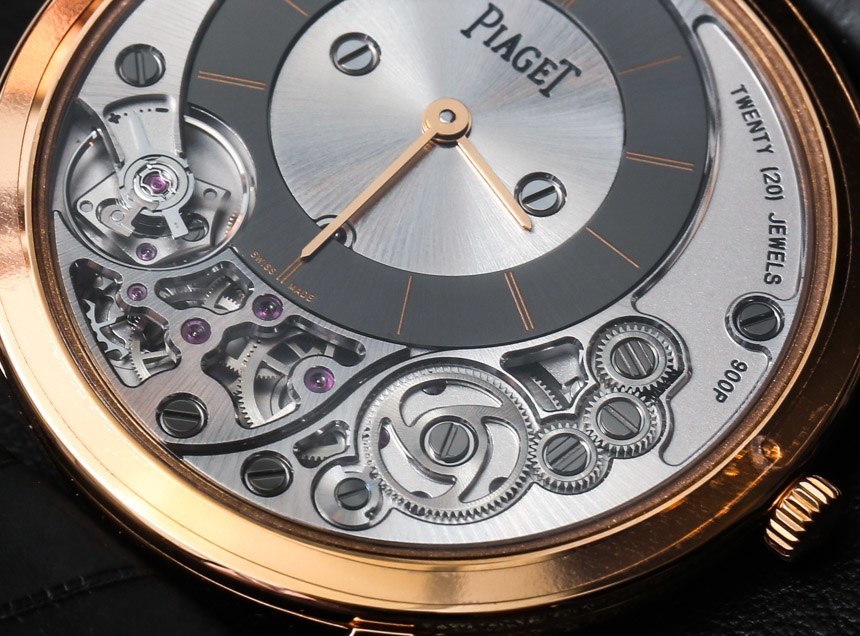 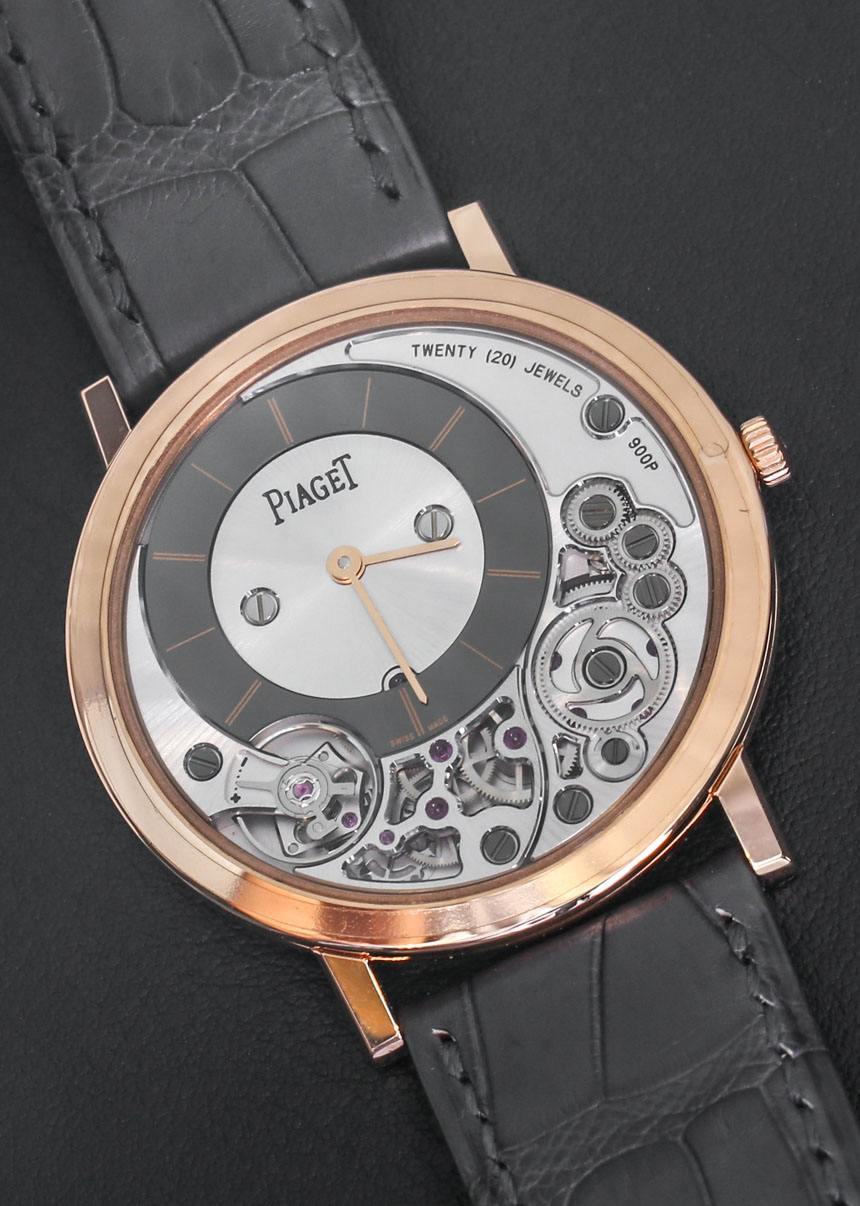 From a style perspective, this much of a view into the movement isn’t uncommon for Piaget, but the brand often has an “all or nothing” approach when it comes to showing off the movement. That means you typically have a totally clean and elegant dial in other Altiplano models, or you have a totally skeletonized approach when Piaget distinctly wants to show off the movement in its full and decorated glory. That makes the Piaget Altiplano 900P something of a hybrid between the two visual philosophies.

Also good is that legibility when reading the time indication dial is rather good. As you can see, the 18k white gold and 18k rose gold versions of the Piaget Altiplano 900P have distinct finishes on the dial. I find the rose gold hands on gray a bit easier to read, but as far as dress watches go – especially those with visible movements on the dial, Piaget did a pretty good job with the Piaget Altiplano 900P in that regard. 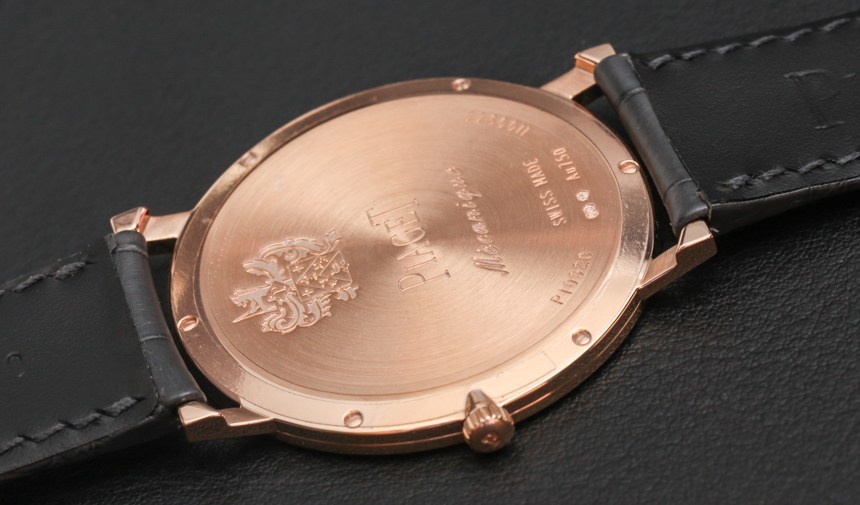 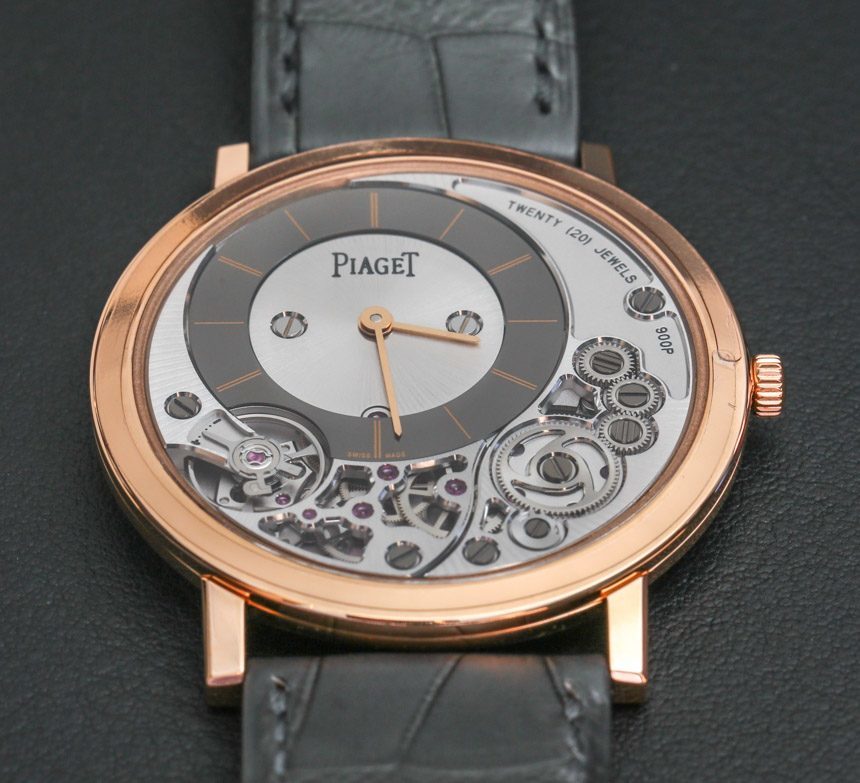 We’ve seen Piaget Altiplano models as large as 43mm wide, and as small as 38mm wide. The Piaget Altiplano 900P fits into the smaller segment with a 38mm wide case. Some will find this the perfect size and others will consider it too small. While I sympathize with the latter group, I should say that at 38mm wide, the Piaget Altiplano 900P feels extremely proportionally sound. This is important, given how the size of elements like the bezel, lugs, and strap meld with the incredibly thin case. Also note that these watches photographed in this article have some protective plastic on the bezel of the case – in case you were wondering what that was all about.

When I first discussed the Piaget Altiplano 900P watch, I took the opportunity to discuss “ultra-thin” watches overall. While I am a fan of the concept, I mentioned the important fact that at a certain point, “thin is enough.” The idea is that after a watch becomes so thin, you can’t really notice it getting any thinner, and when it is too thin, the strap appears thicker than the case – which isn’t a good thing. So when it comes down to it, watches under 5mm thick are more-or-less competing for bragging rights and technical accomplishments. Once you wear a watch of a certain thinness, you don’t really gain anything visually or aesthetically by going any thinner. 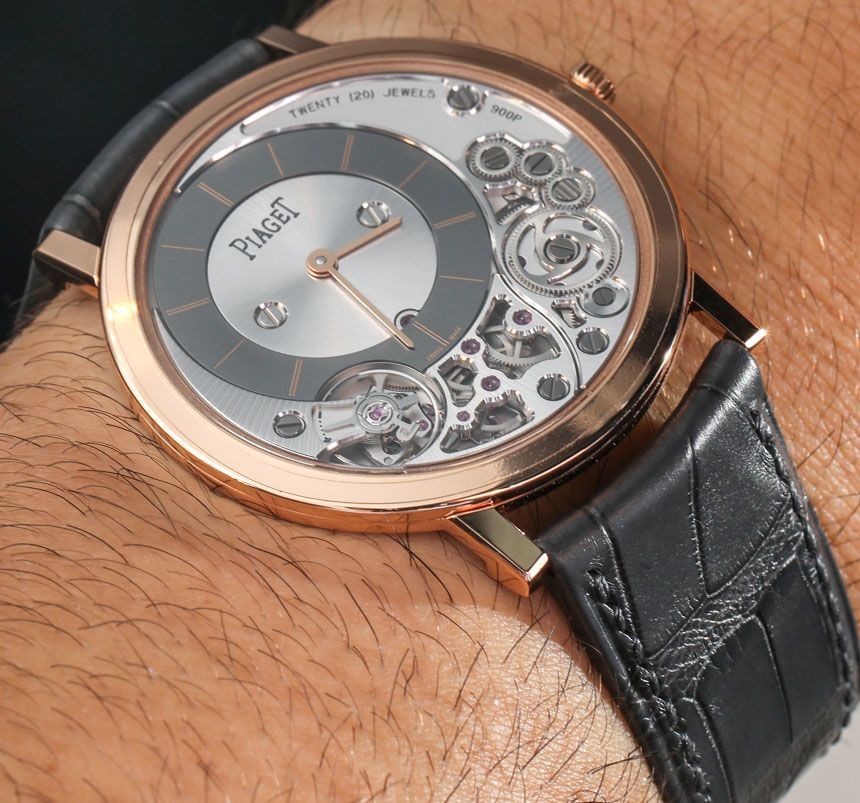 Wearing the Piaget Altiplano 900P does offer the wearer the feeling of experiencing an “achievement” on the wrist. Not only a technical achievement, but also in terms of rarity. The Piaget Altiplano 900P is a rare treat insofar as that Piaget isn’t exactly able to crank them out. Even though it is a simple mechanism, considerable effort is required in testing and assembling each of Piaget’s “ultra-thin” calibers. The best part is that this is one of those technically interesting watches with a great story that is also easily worn on a daily basis. It also helps that the story behind the watch is one that non-watch people will understand. Try explaining to someone why they should be impressed by a constant force escapement or the “world’s thinnest watch.” Clearly, you know which one your audience will digest more readily.

Even if you aren’t personally interested in wearing a watch that is 3.65mm thick and doesn’t have a distinction between case and movement, I do recommend seeking out a Piaget Altiplano 900P watch just to try on your wrist at some point. Most watch lovers who do will have a new-found appreciation of what ultra-thin is, and will at least perhaps be able to understand what thin watch aficionados see in these interesting mechanical accomplishments. The Piaget Altiplano 900P watch in 18k rose gold is $26,000 and $27,800 in 18k white gold. piaget.com