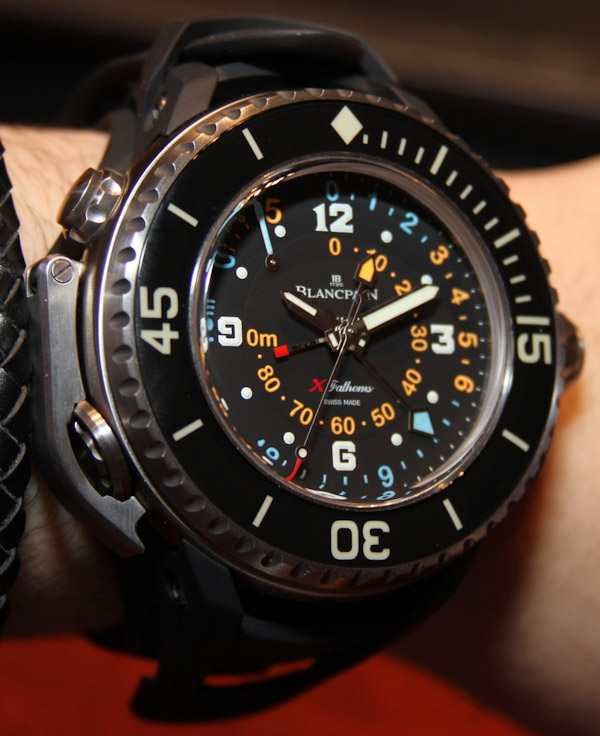 This Blancpain X Fathoms watch is a piece I was really excited to get on my wrist (at long last!). Not only is it large and very complex, but Blancpain claimed that it was fitted with the most complicated rubber strap ever made for a watch. That alone made me curious about it. The X Fathoms is the thematic flagship watch in the “Fathoms” collection. This started with the vintage 50 Fathoms, which led to today’s 50 Fathoms, as well as the 500 Fathoms watches. Each of them represents for me the most desirable pieces in Blancpain’s current collection given my own tastes. I just love a nice diver! The X Fathoms isn’t the  deepest diving “Fathoms” piece, but it is the most complicated. Blancpain has offered basic automatic, GMT, and chronograph versions of their 50 and 500 Fathoms watches. The X Fathoms has a very sophisticated mechanical depth gauge system.

I debuted the X Fathoms watch here, where I discuss its functions in much more detail. If you aren’t familiar with the watch you’ll really want to check out that previous article before you can understand what you are seeing in this one. The piece as it is on my wrist is still a prototype. I believe they have fully functioning models, but this wasn’t one of them. That is OK, because I wasn’t exactly in a position to test it out underwater. The X Fathoms dial has three hands dedicated to its depth gauge functions. It claims to be the most accurate mechanical depth gauge watch around, and can measure depths of up to 90 meters. I think that is as deep as most humans will go without being in some type of submersible. 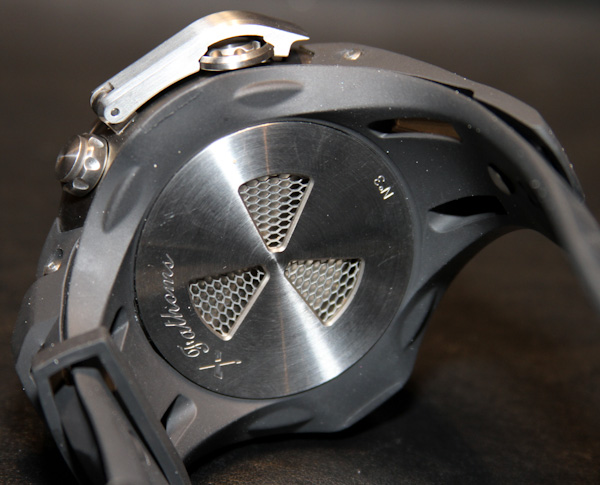 The dial shows the current depth using two precise hands, the maximum depth, and a retrograde 5 minute counter for timing decompression times. That hand can be reset at any time. Yeah, it has the time as well. All thanks to an in-house made automatic Blancpain mechanical movement. The depth gauge is also mechanical and uses pressure membranes on the case that are covered up with little pieces of hexagon grating – which look pretty cool actually.

At almost 56mm wide, the piece is rather massive – especially considering the design of the case and strap. Though the X Fathoms watch is made out of titanium, so it isn’t that heavy. In line with the popular bezel style of the 50 Fathoms watch, the rotating bezel is topped with a curved sapphire crystal. This timepiece really makes the most out of its size, and it will stick off your wrist like a tool made for underwater Batman. Speaking of Batman, that titanium clasp on the buckle certainly looks like his logo a bit right? Especially with the convenient letter “B.” I think I see a collaboration in the future. Bruce Wayne would certainly sport a Blancpain – for sure. Blancpain should make a watch set that includes two watches (or perhaps a convertible one), that would be for Bruce Wayne’s formal wear, and for Batman’s high-tech durable needs. I think Mr. Hayek would be all over that. 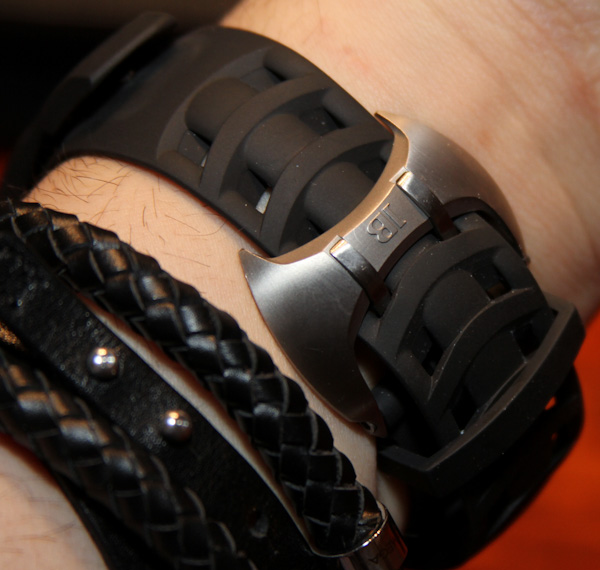 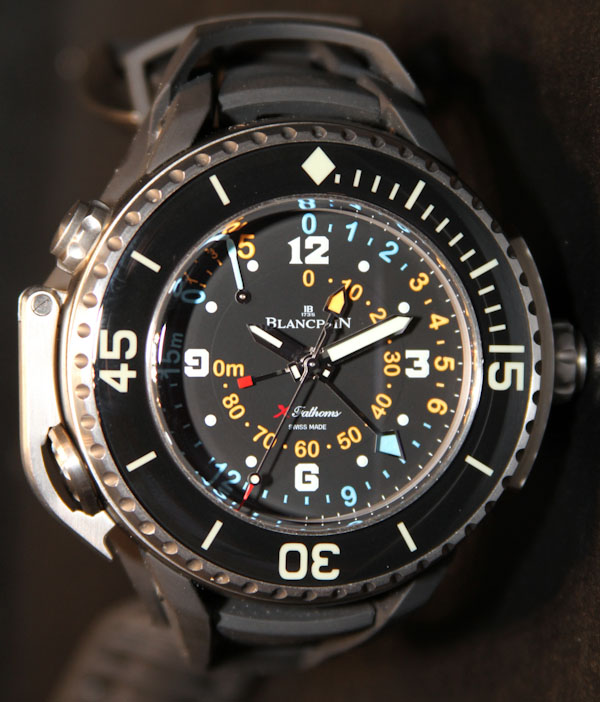 The complicated rubber strap doesn’t disappoint. It has a series of flaps so to say and does a good job of snugly securing to your wrist. It looks a bit bat ray-ish (well of course it does). It might have a ton of part and pieces, but it is rather comfortable given the pretty huge (wide and thick) watch on your wrist. I’d say that you need to wear it for yourself to really understand what it feels and looks like.

Blancpain knows that the X Fathoms watch is going to be anything but a mainstream piece. I can imagine one sitting in a Tourneau store next to an Aqualung or something like that. A customer who is not knowledgeable about watches notices it and begins to asks question like “now what is that?” This is where the salesperson melts or just says “that is a dive watch with a depth gauge.” What a sad and underwhelming response that will be. Prices for the X Fathoms are going to be in the 40,000 Swiss Francs range I believe. I seriously want to see one on a wrist in the wild soon.