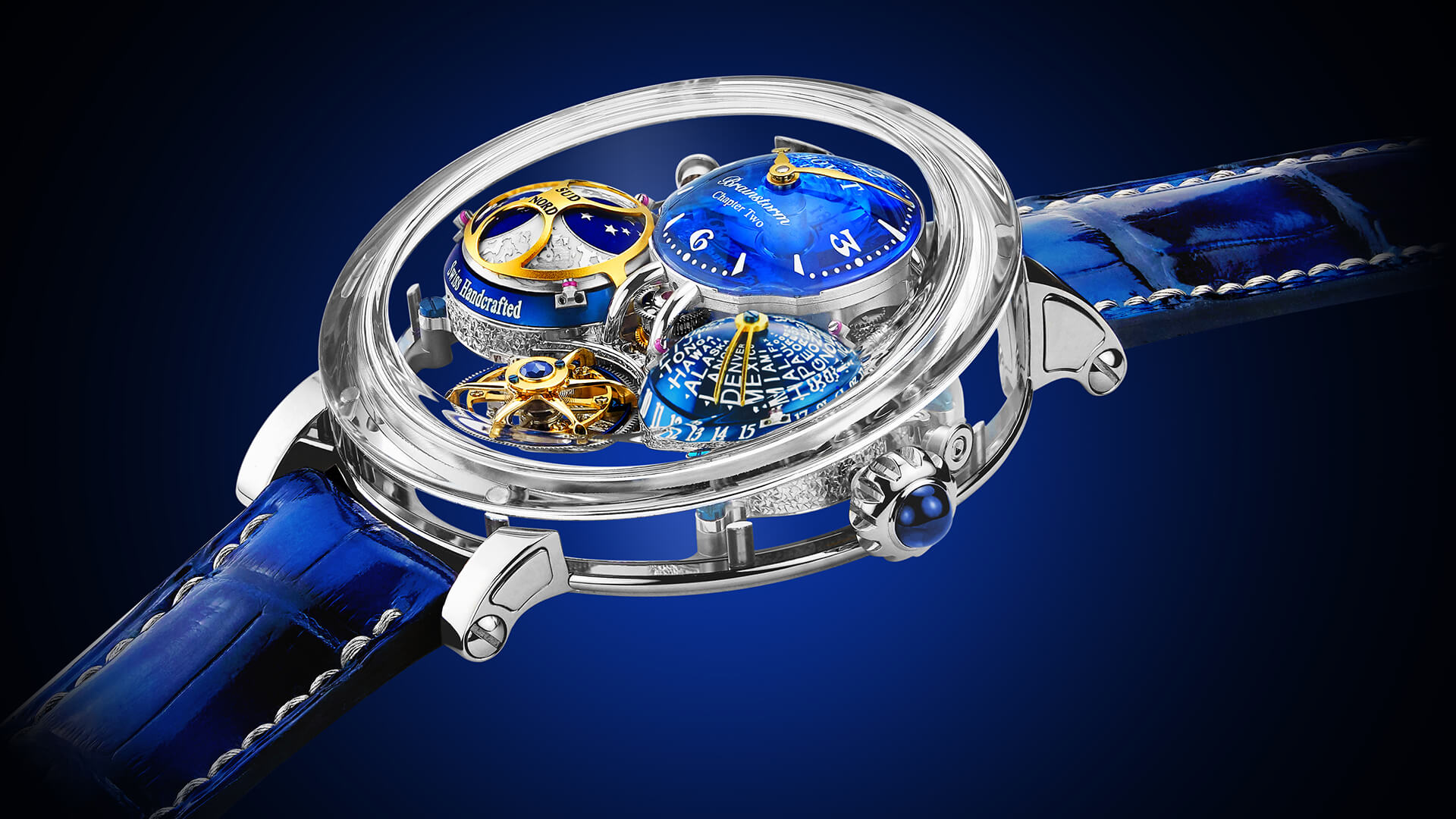 In the current haute horlogerie landscape, there is no more striking option for ateliers looking to show off movement design than an all sapphire case. Bovet made a splash in this exclusive niche in 2019 with the release of the distinctive sloping Récital 26 Brainstorm Chapter One, with a unique case designed to maximize visibility of its complex movement from the wrist. For 2020, the marque has refined the concept, adding an indexable second time zone complication along with a more symmetrical layout to the brand’s signature double faced flying tourbillon design. This new limited edition Bovet Récital 26 Brainstorm Chapter Two takes one of the most harmonious approaches in the segment, with a balanced aesthetic that loses none of its theatricality. 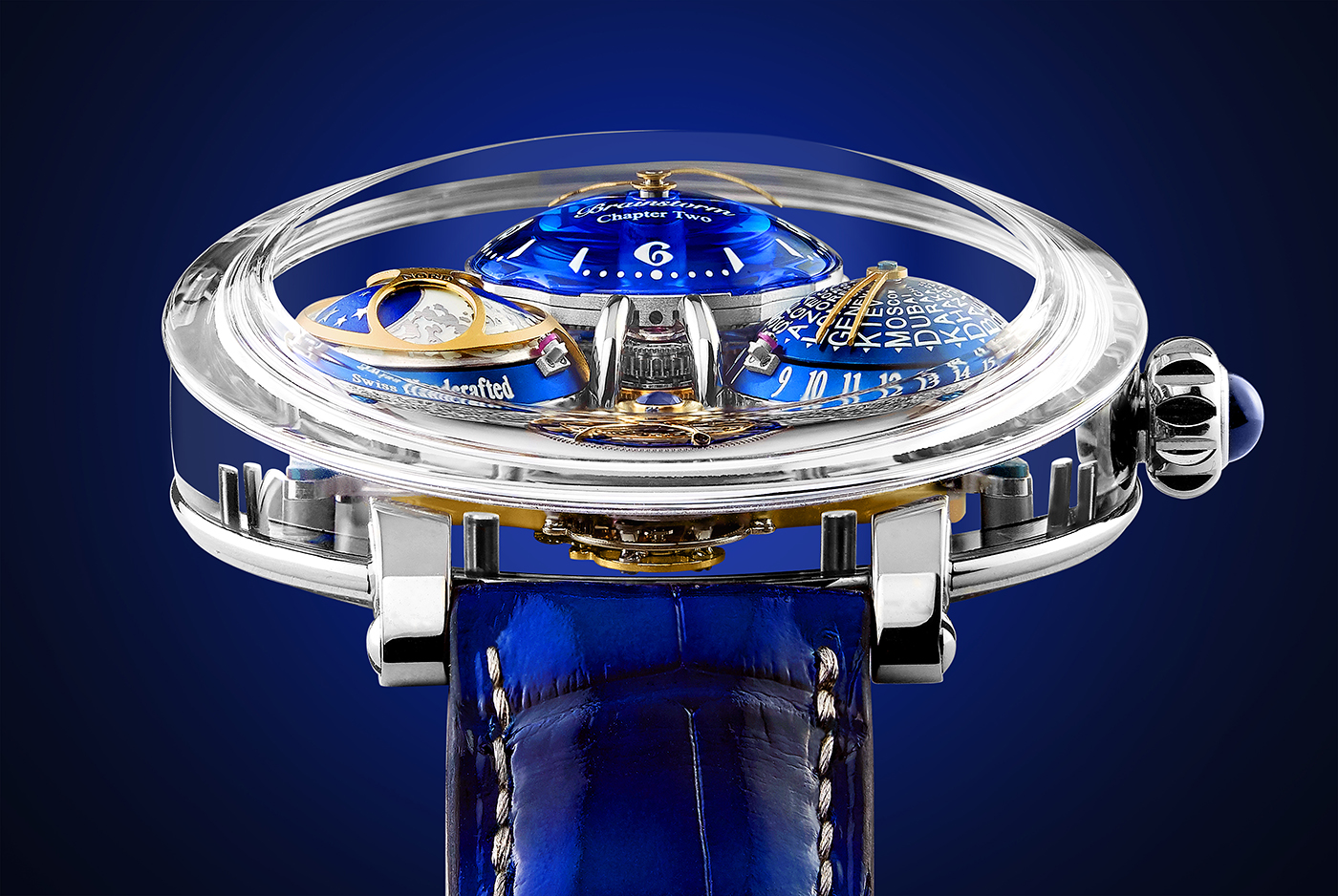 The 47.8mm sapphire case of the Bovet Récital 26 Brainstorm Chapter Two shares the same distinctive sloped shape as its predecessor, nicknamed the “writing desk” case by the brand. The tall, gently angled case sides allow for better dial visibility at oblique angles, which coupled with the tall domed subdials leads the Brainstorm Chapter Two to being surprisingly easy to read at a glance. Apart from the “writing desk” shape, the case aids visibility at all angles with one added feature. While most movements are secured to the watch case around the middle, the Brainstorm Chapter Two eliminates the need for an unsightly metal ring blocking the side view of its movement by mounting the movement base to a titanium caseback ring. The minimalist screw-in mounting points also give the movement an ethereal, floating appearance within the clear case, while the titanium caseback coupled with short titanium lugs helps to provide overall rigidity. Even with these titanium components, though, one would suspect this design is far from ready for field duty in terms of durability. 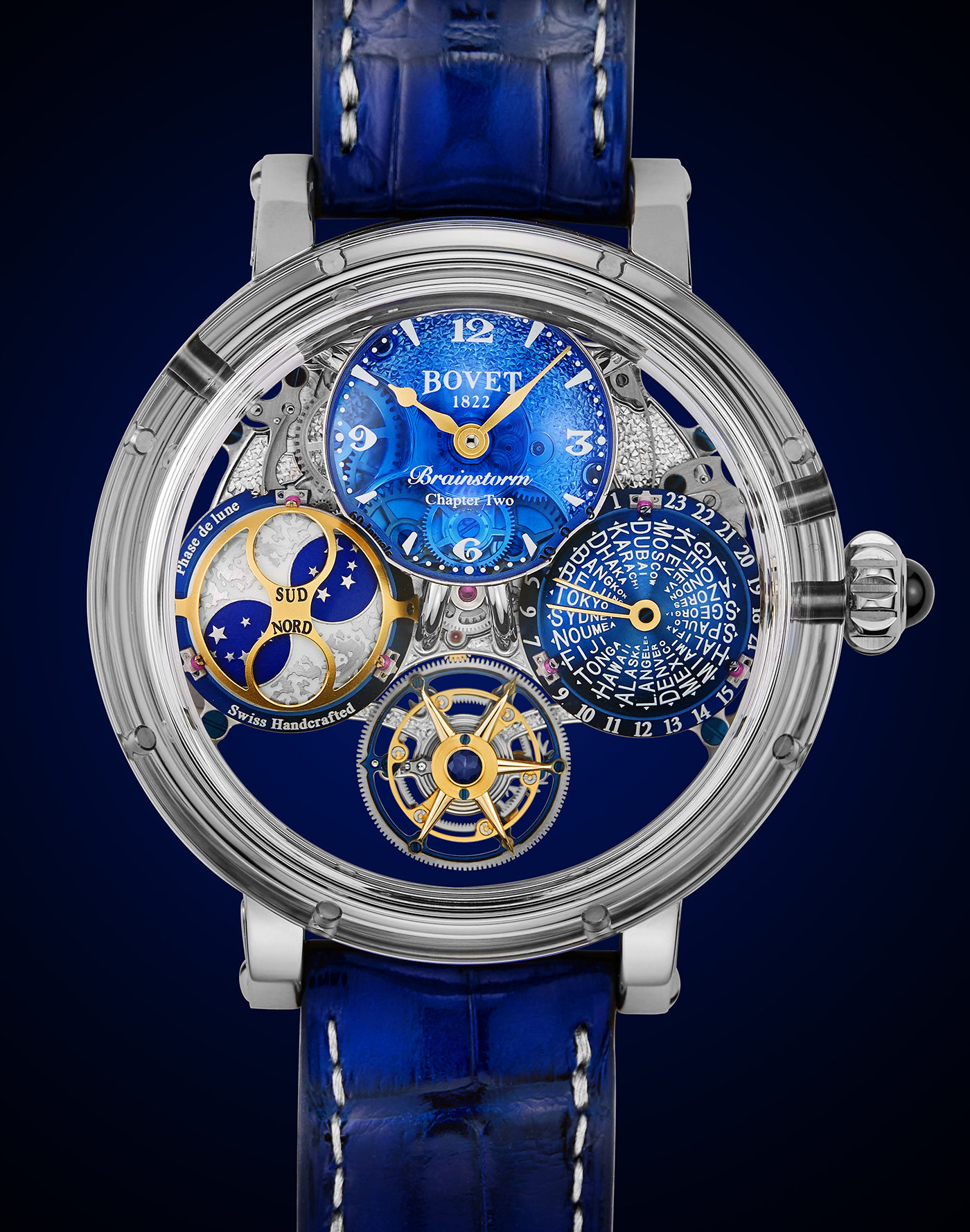 Bovet manages an impressive balancing act with the dial design of the Récital 26 Brainstorm Chapter Two, creating a skeleton dial with multiple complications that feels balanced and clear while maintaining a suitable sense of awe. That’s a difficult enough feat with any watch involving a flying tourbillon, but with a timepiece this complex it becomes even more noteworthy. Each complication is situated in its own domed module above its respective movement components, with the large main timekeeping subdial situated at 12 o’clock. As an added layer of depth, the domed subdial surface itself is transparent, revealing the gear train beneath and adding a sculptural element to a design already rife with visual layering. Available in blue quartz, green quartz, or speckled blue aventurine glass, this subdial is topped with a pair of classical gold spade and leaf hands.

While most haute horlogerie designs of this type make a flying tourbillon into the undisputed visual centerpiece, the Brainstorm Chapter Two balances the visual weight of this complex element carefully against each of the other subdials to maintain the flow of focus across the watch. That said, the patented Bovet double faced flying tourbillon is far from lacking in presentation, framed not by ornate skeleton bridgework but floating freely in the watch’s largest use of so-called negative space. At 3 o’clock and 9 o’clock are two slightly smaller domes for the second time zone and moonphase complication, respectively. The indexable second time zone dome allows wearers to track the time in one of 24 cities around the globe, with the golden indicator surrounding the selected city as the top of the dome makes a 24 hour rotation around the numbered ring below. On the other side, the moonphase is one of the most visually striking elements of the dial, featuring a hand engraved and lumed lunar dome rotating beneath a gold indicator displaying the phase of the moon in both northern and southern hemispheres. 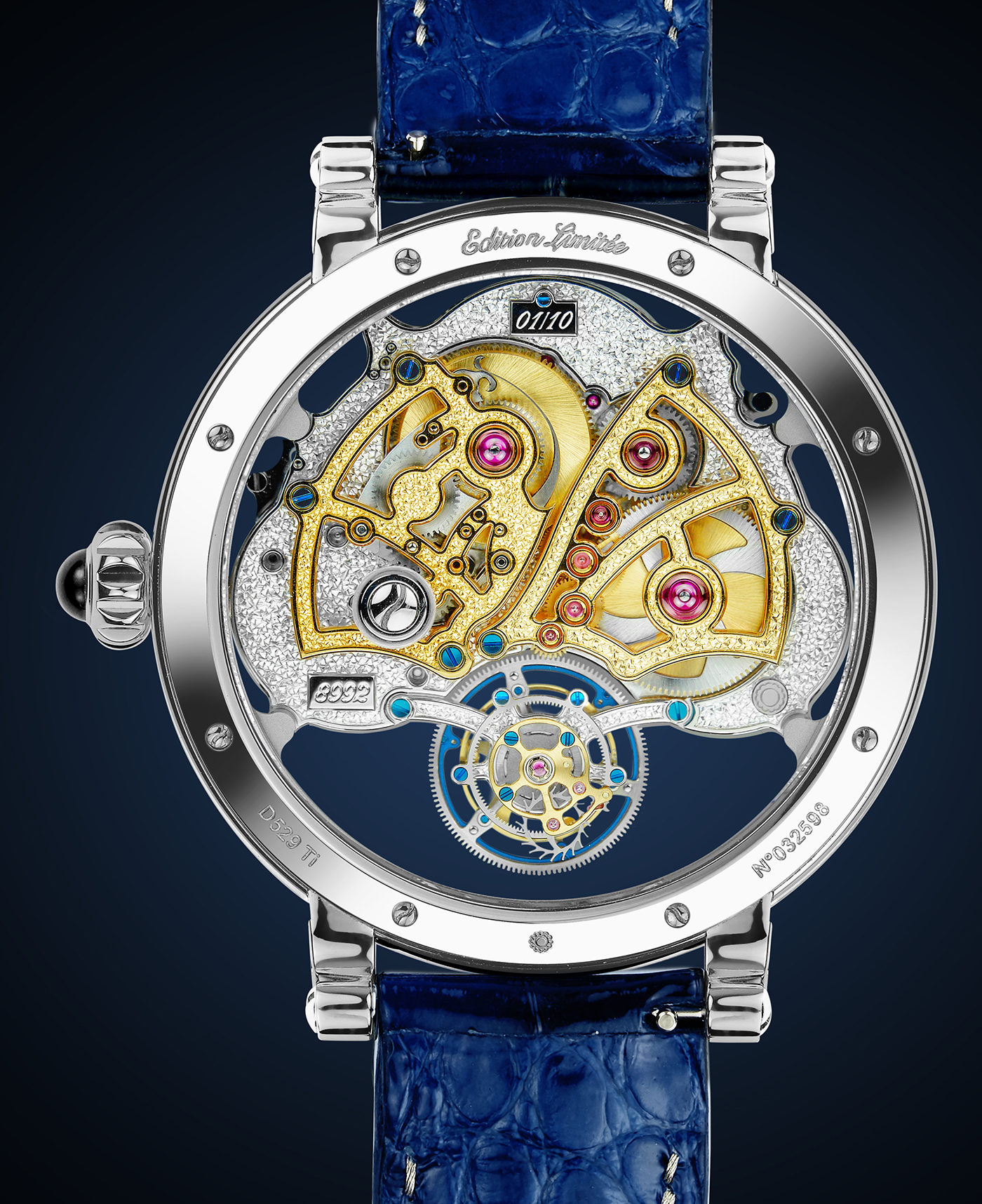 The in-house hand-wound 17DM06-DT movement inside the Bovet Récital 26 Brainstorm Chapter Two spent four full years in development, and the end result of this intensive creation process shines through vividly. Each of the domed complication subdials sits atop a finely engraved cylinder, which in turn sit atop an elegant web of dynamically surfaced plates and bridges. Even through the caseback window the flying tourbillon presents handsomely thanks to Bovet’s double face design. Beyond the horological eye candy the 17DM06-DT provides a hefty five day power reserve at a steady 21,600 bph beat rate. 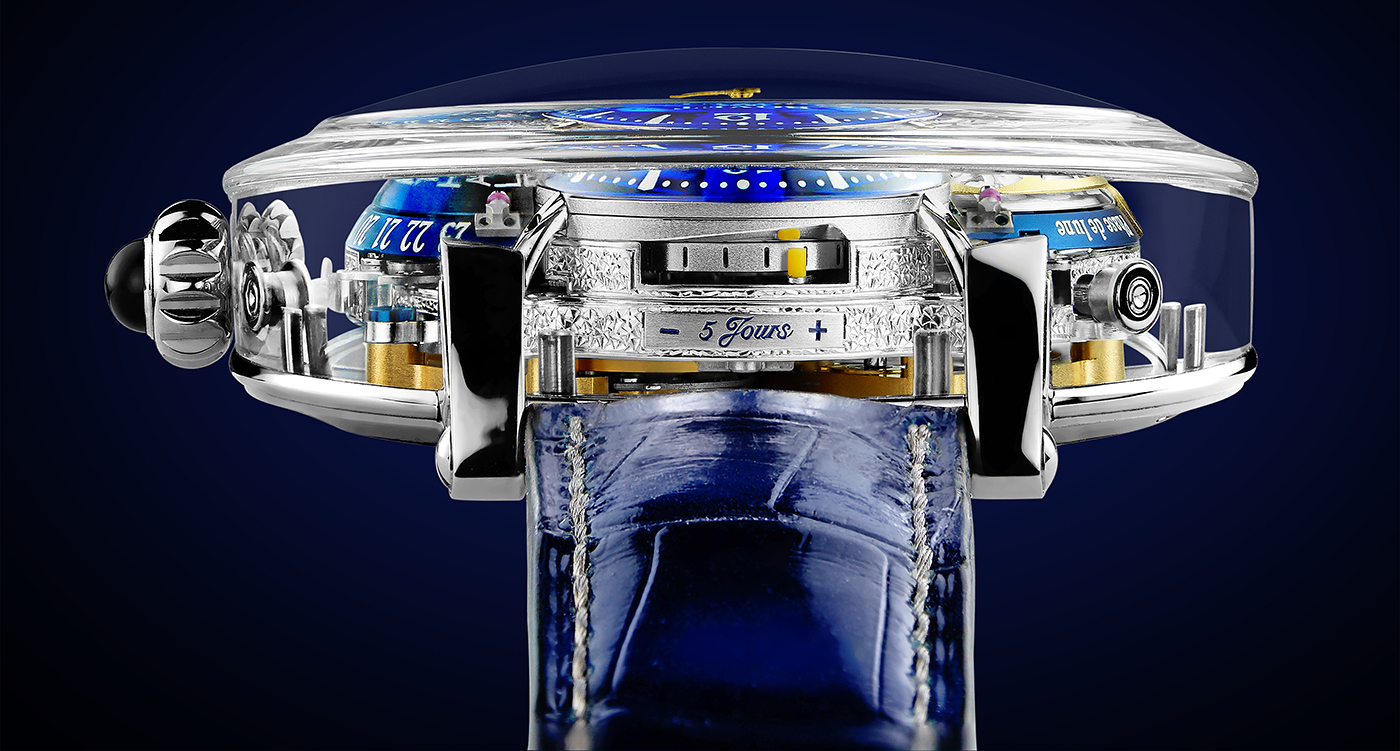 While the use of royal blue alligator leather for the Bovet Récital 26 Brainstorm Chapter Two is rather unsurprising in and of itself, this strap sets itself apart through sheer force of ostentation. The strap is fully double sided rather than lined with another material on the inner, but the most opulent touch comes courtesy of the stitching – hand applied with pure platinum thread. 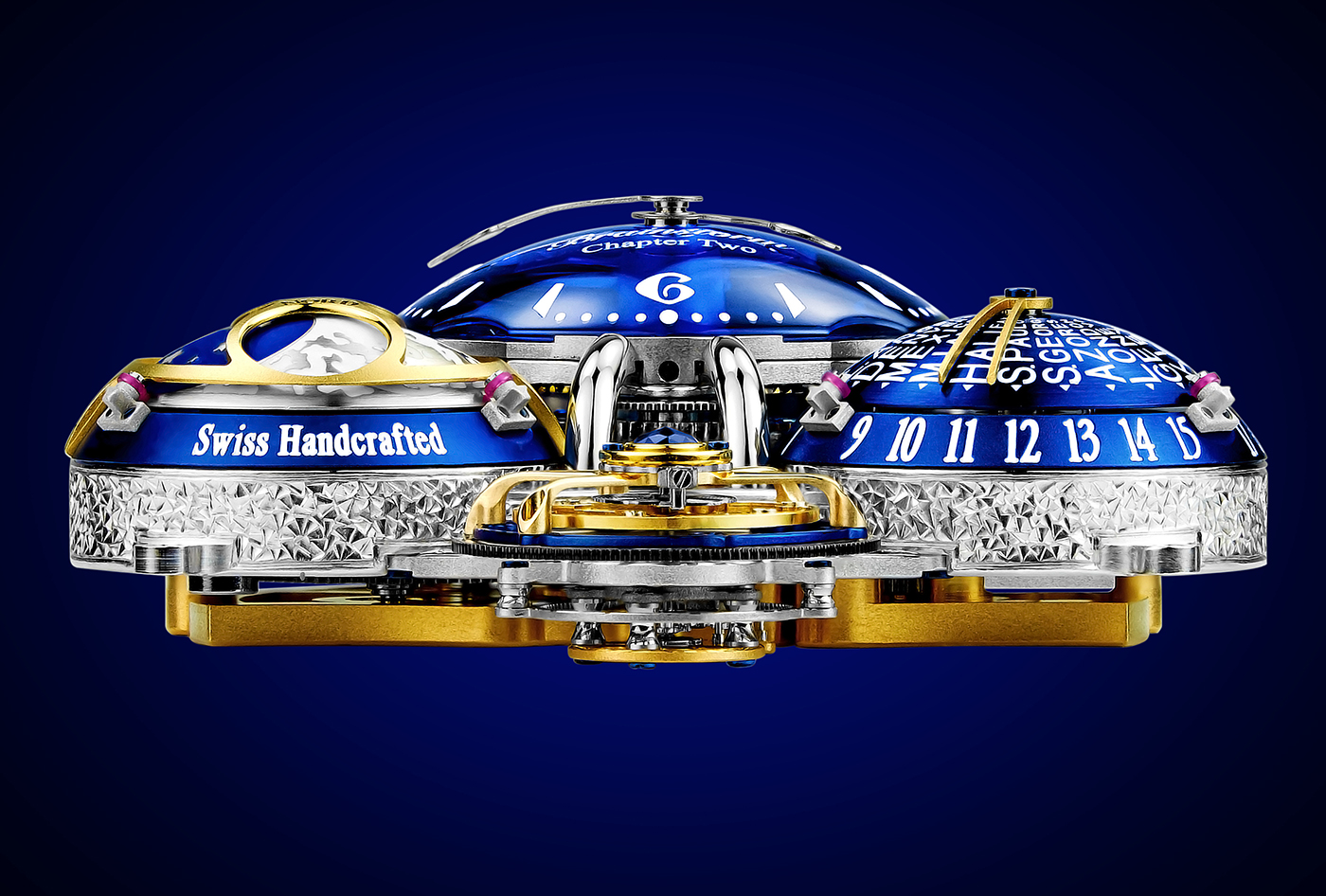 In a segment defined by over the top baroque designs, the Bovet Récital 26 Brainstorm Chapter Two stands out brilliantly by virtue of its commitment to legibility and balance. It’s difficult to call any six-figure sapphire cased skeleton timepiece tastefully reserved, but Bovet comes the closest, and by quite some margin. While the Brainstorm Chapter Two is slated to be a limited edition, the details of its production are slightly hazy. According to the brand up to 60 examples of this movement will be produced, but only 30 cases divided evenly between the three different dial color options. What this means for the additional 30 movements is unclear, but a future non-sapphire version may not be out of the realm of possibility. The Bovet Récital 26 Brainstorm Chapter Two is available to order now through authorized dealers at an MSRP of $383,500. For more information, please visit the brand’s website.