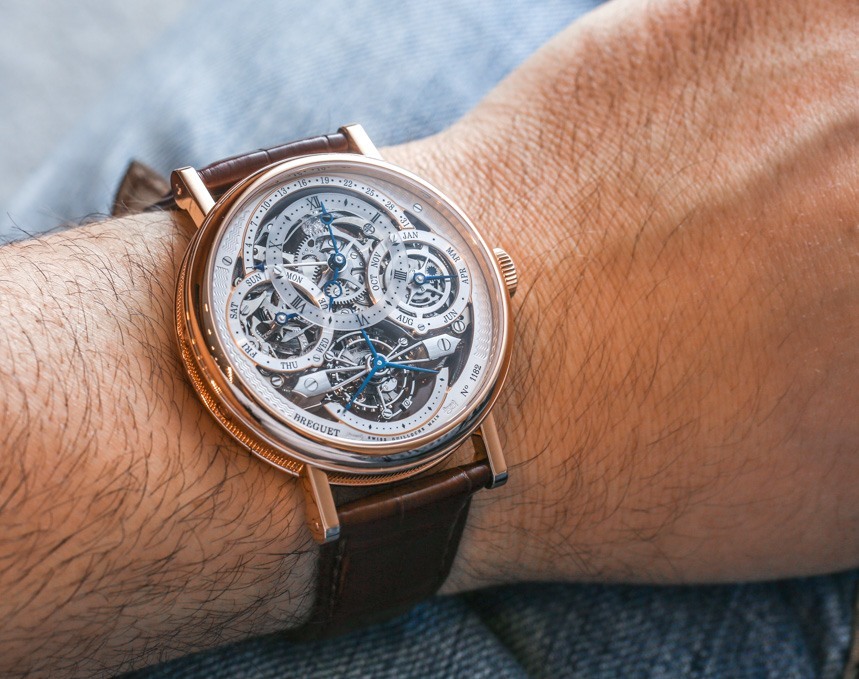 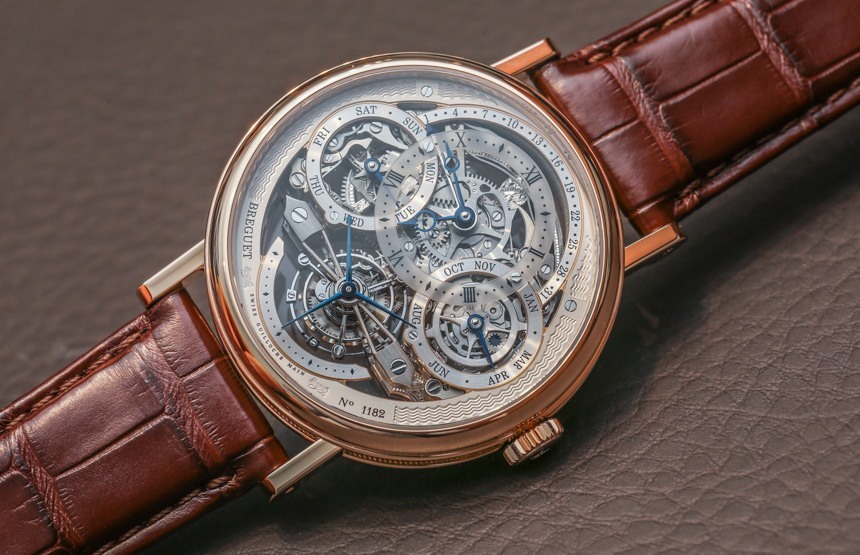 At BaselWorld 2014, Breguet revealed two extremely complicated “halo-pieces,” humbly titled the Breguet Classique Complications 3795 and 3797, each featuring a tourbillon, perpetual calendar, and, in the case of the former reference, an extensively and exquisitely skeletonized movement and dial. We went hands-on with both the Breguet Classique Complications 3795 skeletonized watch, as well as the non-skeletonized 3797 version in red gold. Given that these pieces are very much indicative of what the modern Breguet is capable of when it comes to both technical complexity and quality of finishing, we were curious to see what a closer look would reveal. 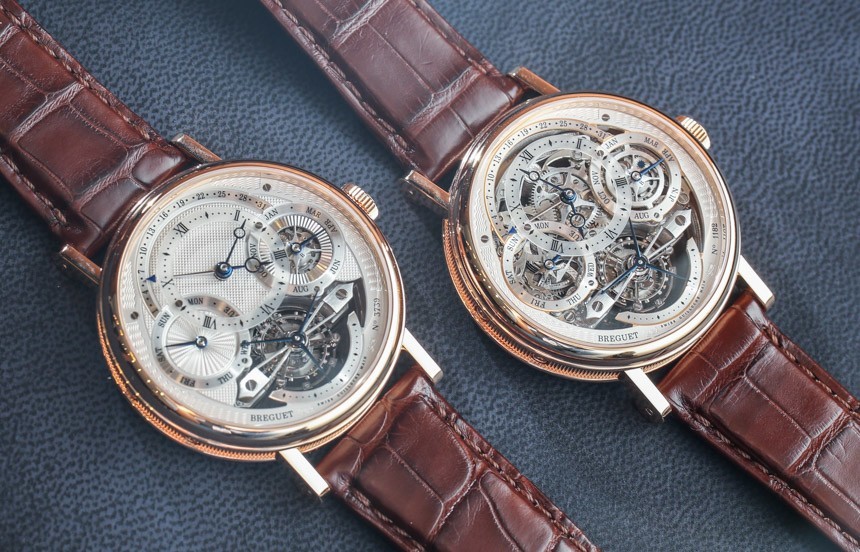 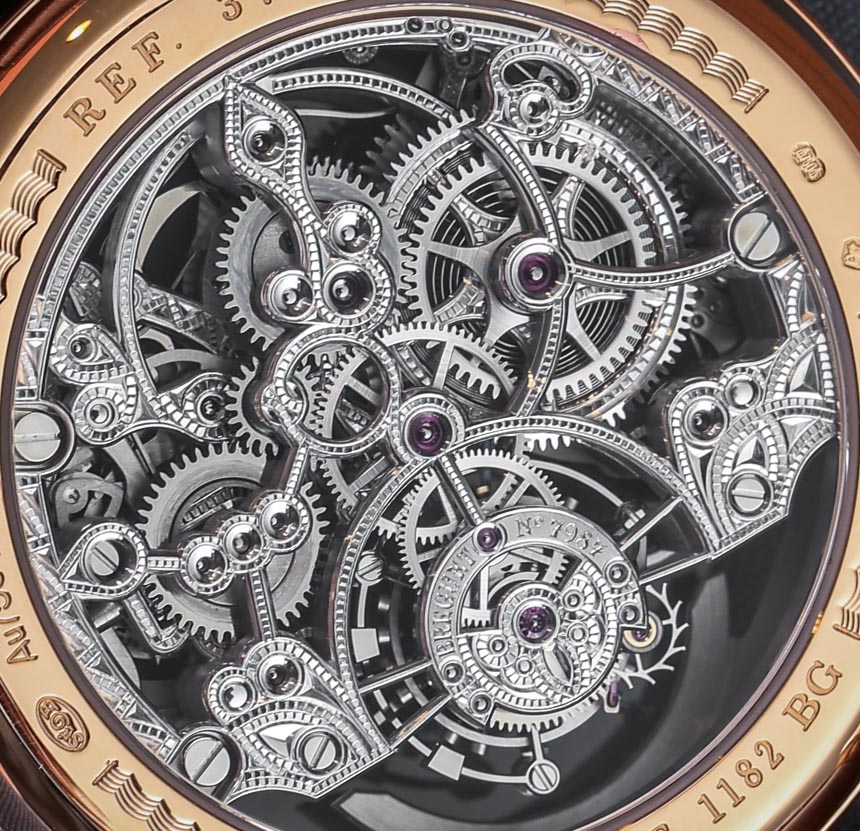 Both references share the exact same movement layout and features, comprising a main subdial at the upper center for the hours and minutes, two subdials at 3 and 9 for the month, leap-year, as well as the day indications, while the retrograde date is shown on a subtle and elegant arch, connecting the two subdials from above. On both references, the traditional 1-minute tourbillon has been exposed at the 6 o’clock position, secured by a skeletonized bridge and crowned by a three-pronged seconds hand. In essence, the Breguet Classique Complications 3795 and Breguet Classique Complications 3797 both display the evergreen mix of perpetual calendar indications and the tourbillon, presented here with a sensible layout. 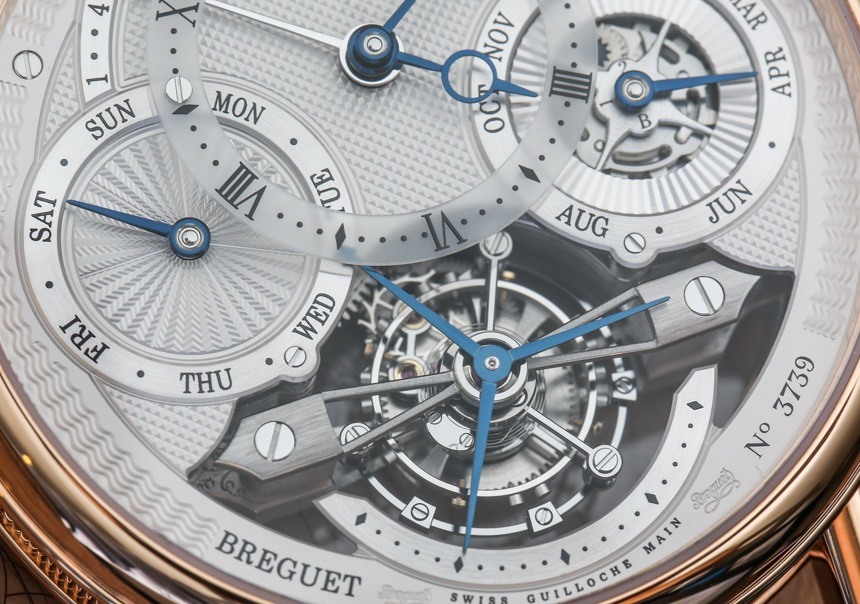 Staying with technicalities, the tourbillon runs at the rate you would expect to see from Breguet: 2.5 Hertz, or 18,000 vibrations per hour, which is the traditional “speed” you would see on an original Breguet from some two centuries ago. Notably, higher frequency tourbillons are more scarce even today, as the considerable weight of the tourbillon assembly already is a strain on the mainspring – at the end of the day, it matters a lot whether this mass is to be stopped and re-started five, six, eight, or more times each second. In turn, the power reserve is over 50 hours which, again, would be considerably less when matched with a faster-beating balance wheel. 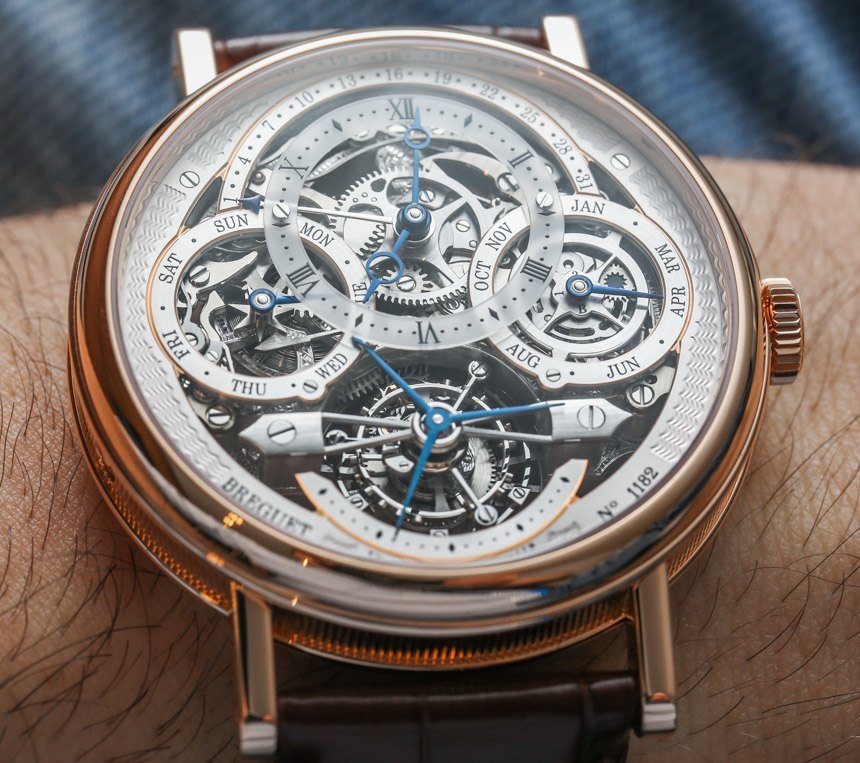 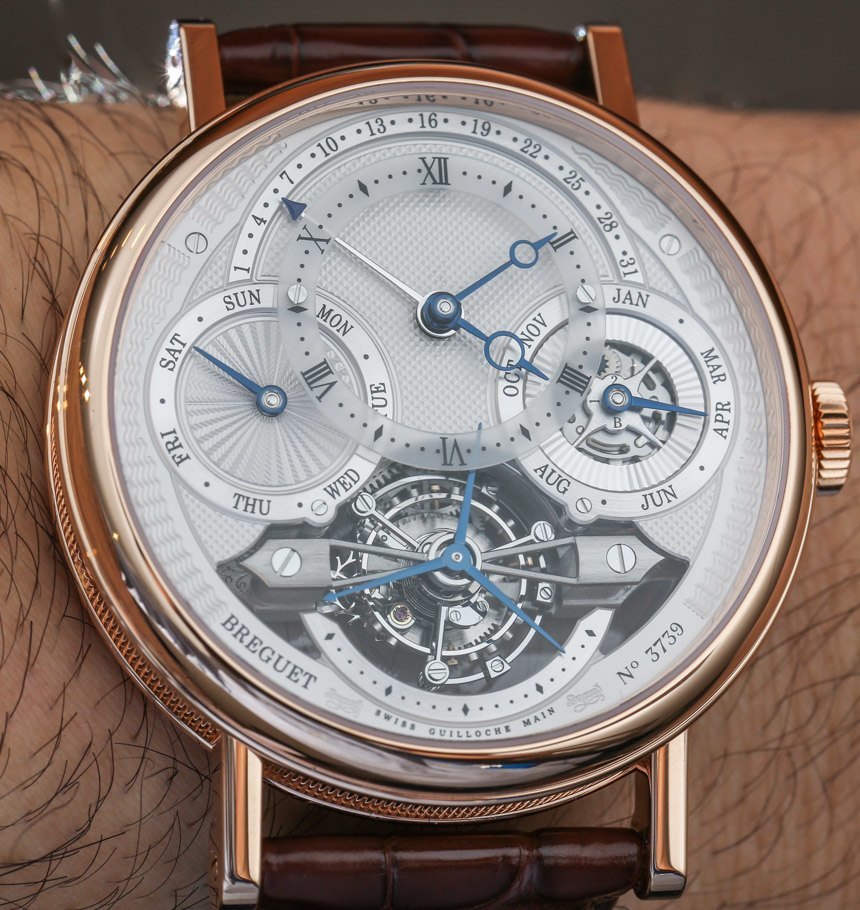 As always, aesthetics are much more subjective, and indeed, we are looking at two greatly different takes on the same movement here. In fact, the two appear to be entirely different watches, for the untrained eye, perhaps even with a different set of functions – with the skeletonized version taking the cake in terms of perceived complexity. While the Breguet Classique Complications 3797, directly above, features a large plate with magnificent and diverse guilloché work – that we will look at more closely soon – the Breguet Classique Complications 3795 does away with most of the dial plate, offering a stellar look into the movement’s countless components through the cutouts made both into the center, as well as around the subdials. 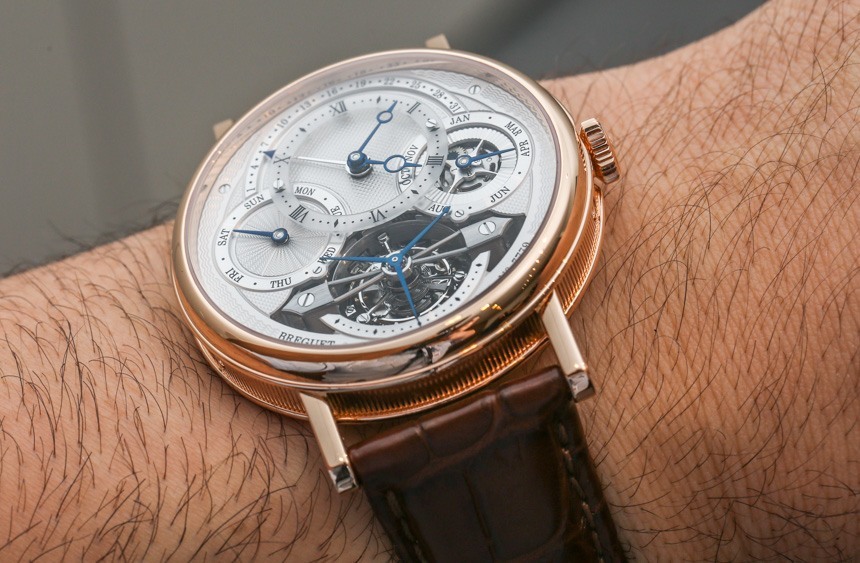 Now that we have wandered so deep into watch wonderland, the time is right to consider such pressing issues as which experience is preferable. One offers arguably better legibility, backed up with extensive and beautifully detailed guilloché – the stunning, refined, deep, hand-applied kind, not stamped or otherwise imitated. As the other option, in stark contrast, there is the beauty of the skeletonized dial and the rare look at the dial-side of such a complex and exquisitely finished movement – decisions, decisions. 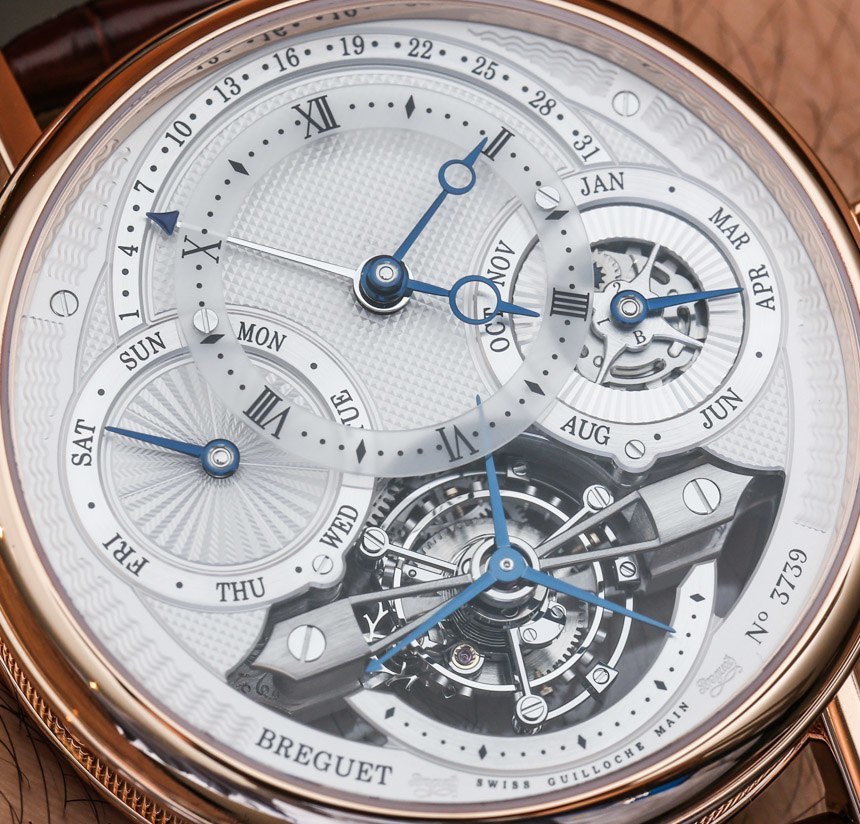 As noted, the guilloché is truly beautiful and, as it should be, diversely and logically varied between the different major sections of the dial. Had they been less interestingly selected, the decision between the two versions would be much easier – having a watch that displayed so stellar an example of such a refined craft as guilloché engraving does make the Breguet Classique Complications 3797 a considerable addition to any ultra high-end collection. 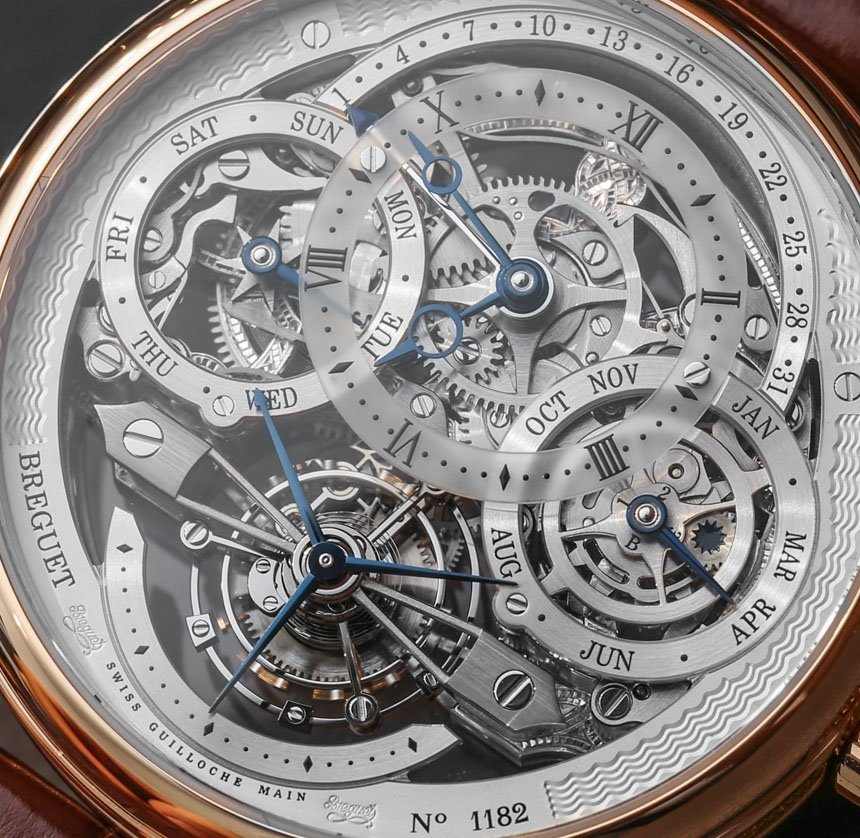 The skeletonized piece fights back with a stellar view at the constellation of meshing and overlapping gears, star wheels, cams – most everything that keeps the mechanical computer that is inside running. One could argue that the proportionate, albeit somewhat skinny Breguet-style hands do tend to get lost in this sea of horological eye-candy – but then again, it is the thickness of the hands that allows for a mostly unobstructed view into the movement. An interesting dial detail on both versions is the sapphire plane carrying the printed Roman numeral indices for the time dial, with the hands for the two sub-dials on both sides drifting underneath the sapphire circle. 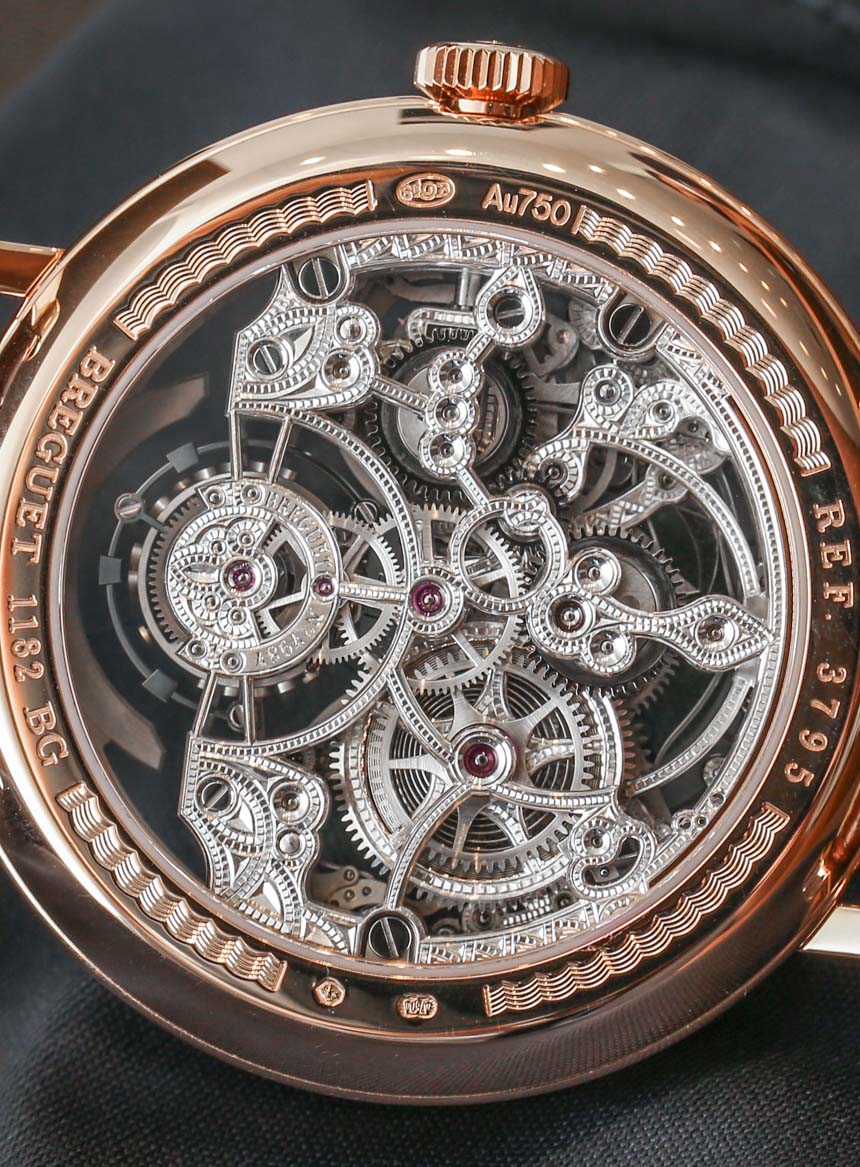 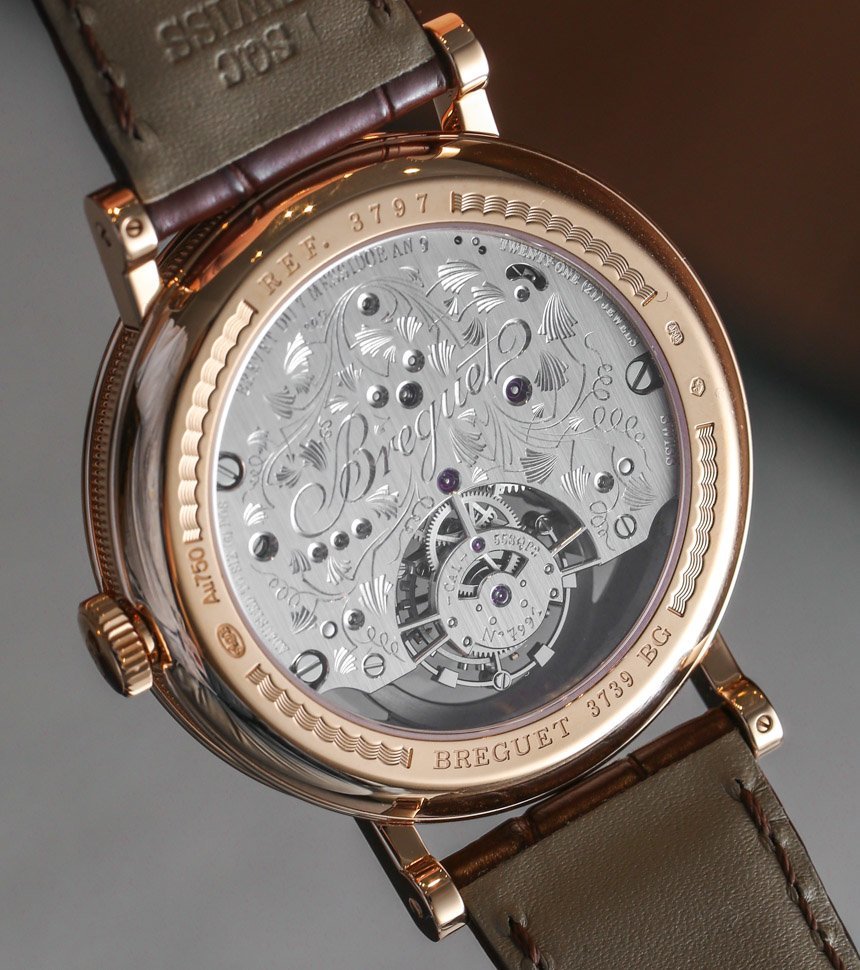 Even the casebacks are vastly different: even more hand-engraving is present on the Breguet Classique Complications 3797’s massive plate that covers the movement, although the “over-sized” Breguet name engraving dominating the view perhaps should have been replaced by a repeated pattern – while there very well may be some customers who need the name’s bragging rights as much as they want the tourbillon, shouting Breguet like so seems a bit unnecessary.

Again, by contrast, the Breguet Classique Complications 3795 appears to have only the bare minimum metal left in its movement’s bridges – although, what is left has been extensively decorated with hand-engraving. On a personal note, I find that I like the model I am looking at at that given moment: once I get to appreciate the comparably less-busy look of the Breguet Classique Complications 3797, I just scroll up and end up getting lost in the countless details of the Breguet Classique Complications 3795, not wanting to give up the chance to appreciate how the movement works… Picking a favorite of these two is difficult and perhaps is not even required – but to see how the wheels are laid out and how the mainspring barrel turns when the movement is wound by hand is a sight any watch lover would have a hard time giving up.

Looking at the larger picture once again, the Breguet Classique Complications 3795 and 3797 are two greatly different – and yet oh-so-similar – watches. Both of them bear some of the trademark details which render Breguet what it is today – one of the most successful and legitimate “resurrected” high-end brands available today. The watches display traditional – or rather: original – Breguet design elements like the indices and hands, but are not afraid to use today’s movement design and manufacturing know-how to bring the brand to 21st century levels. Large, somewhat shouty Breguet engraving aside, both prove that a combination of no-news – albeit stunning – complications have every right to exist in a time when more brands than ever before are busy (re-)inventing ever newer and bolder mechanical features in the luxury watch segment.