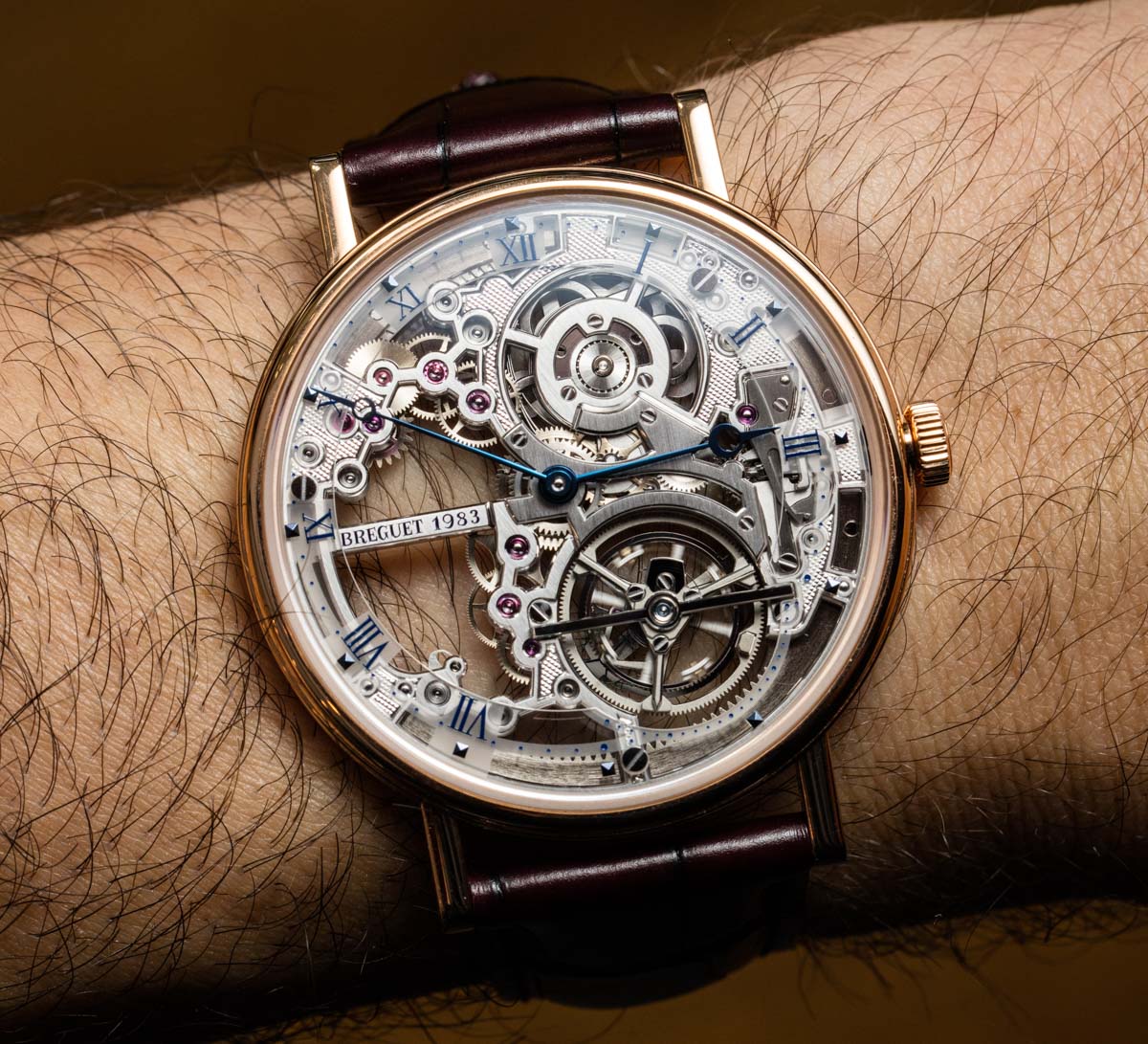 The most elaborate new Breguet watch released for 2019 is this skeletonized version of the brand’s ultra-thin tourbillon known as the Breguet Classique Extra-Plat Tourbillon Squelette 5395 (originally debuted on aBlogtoWatch here). Today, I got hands-on with the 18k rose gold version (5395BR/1S/9WU) of the watch (which is accompanied by a platinum-cased version (5395PT/RS//9WU) that happens to have a rose gold color for the movement bridges.

The novelty here is in Breguet’s skilled ability to design and decorate an attractive and still sturdy skeletonized version of the in-house-made caliber 581 automatic tourbillon movement. In the 5395 watch, the movement is known as the caliber 581SQ (“SQ” for squelette”) and is a lovely mechanism to see in action. I was actually lucky enough to be present at the Breguet manufacture in Switzerland while watchmakers were busy hand-decorating the bridges of the 5395 movements. The bridges are first cut by machine, then completed by hand. The movement place features not only hand-done angling and polishing, but also some guilloché engraving. It is really about Breguet being able to show off multiple crafts in a single product. 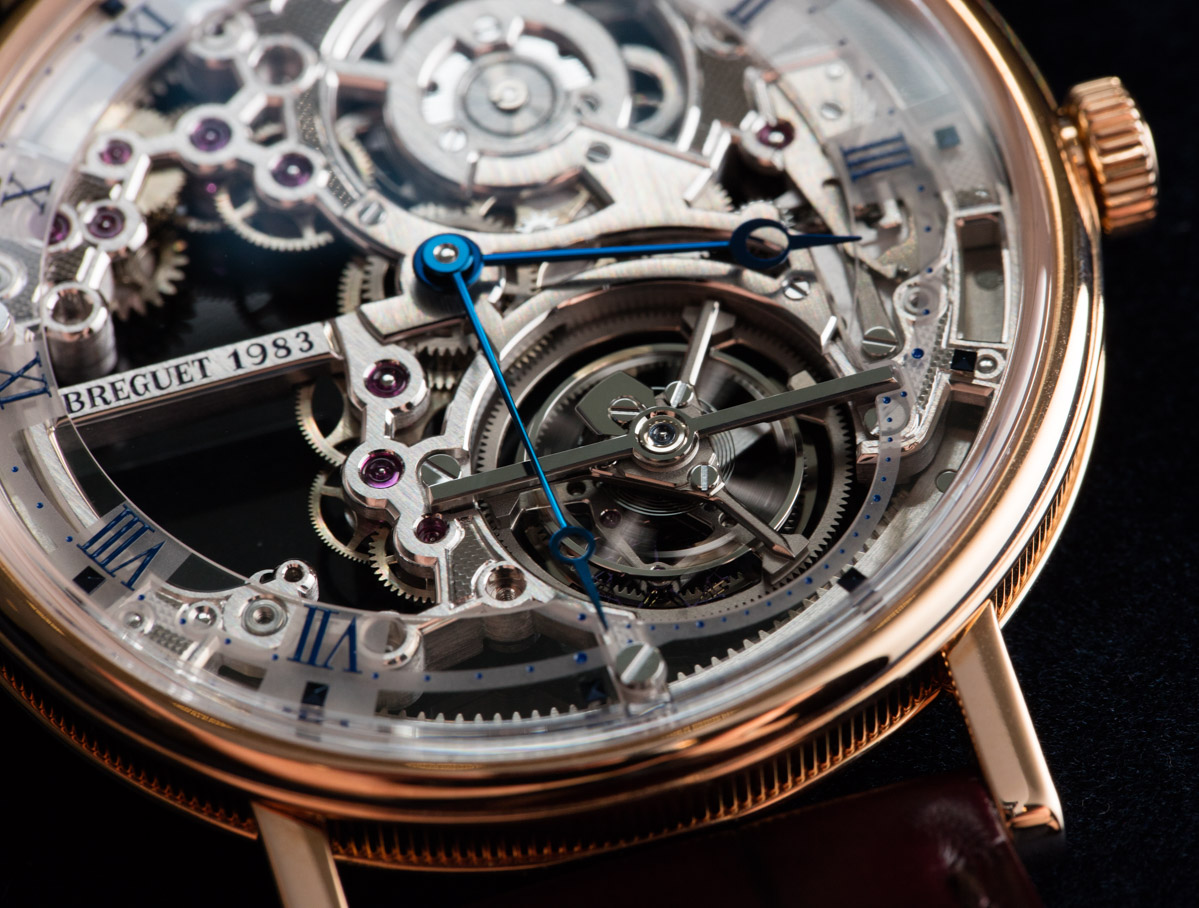 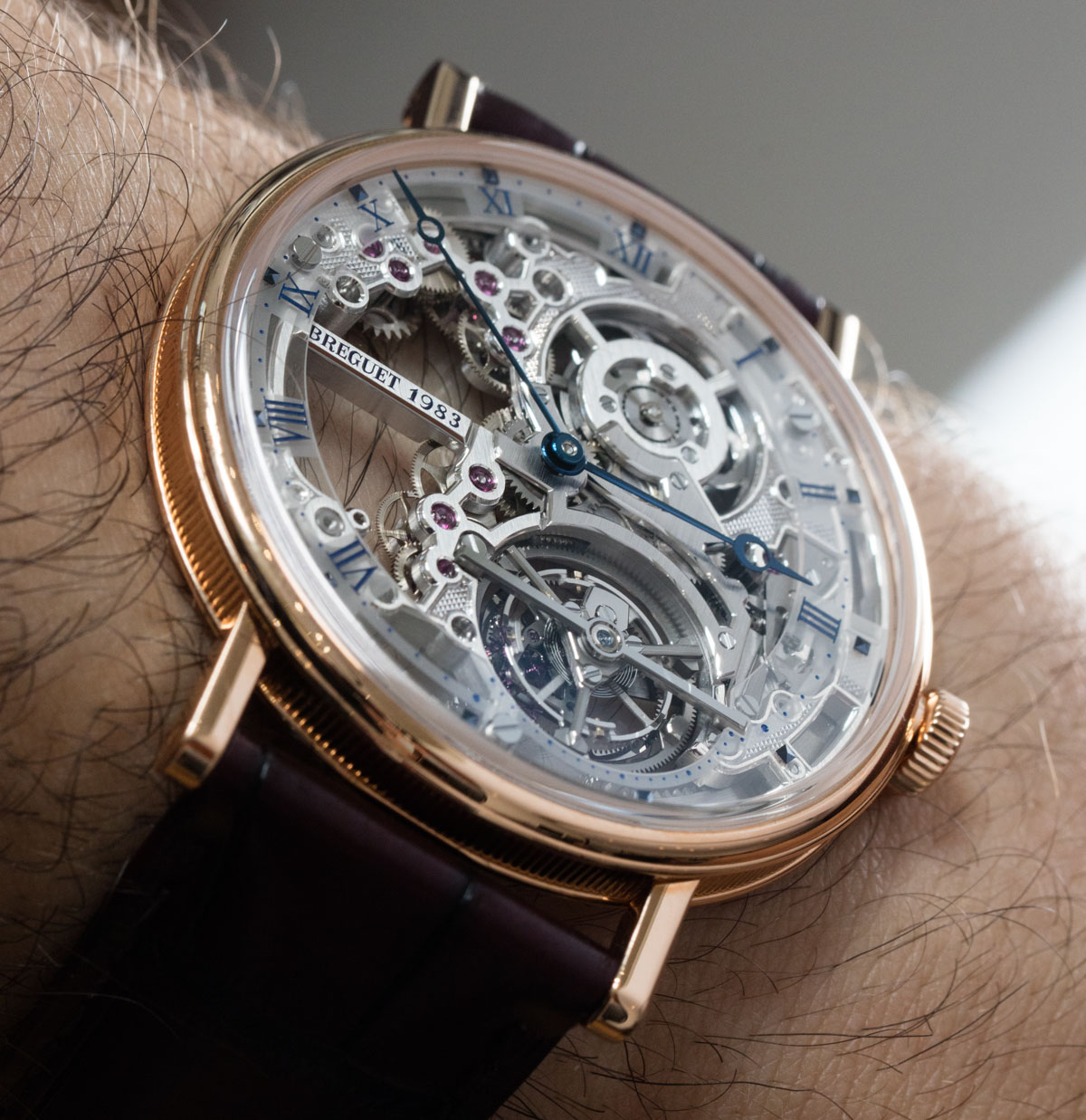 The core appeal of the Breguet Classique Tourbillon Extra-Plat is its technical complexity, as well as its wearability (not to mention aesthetic benefits). The 41mm-wide Classique-style case is only 7.7mm-thick. Yes, the straight lugs do jut out a bit on smaller wrists, but the overall appeal of this masterwork on your wrist is intensive. The skeletonized version complements more discreet models, such as the Classique Tourbillon Extra-Plat with the white enamel dial (which I also enjoy wearing). Legibility on this skeletonized model is assured, thanks to Breguet’s use of blued-steel hands, matching applied hour markers, and a full hour track printed on a transparent ring-style bridge included just above the movement. This is important to mention because many skeletonized watches focus on mere looks to the detriment of legibility. 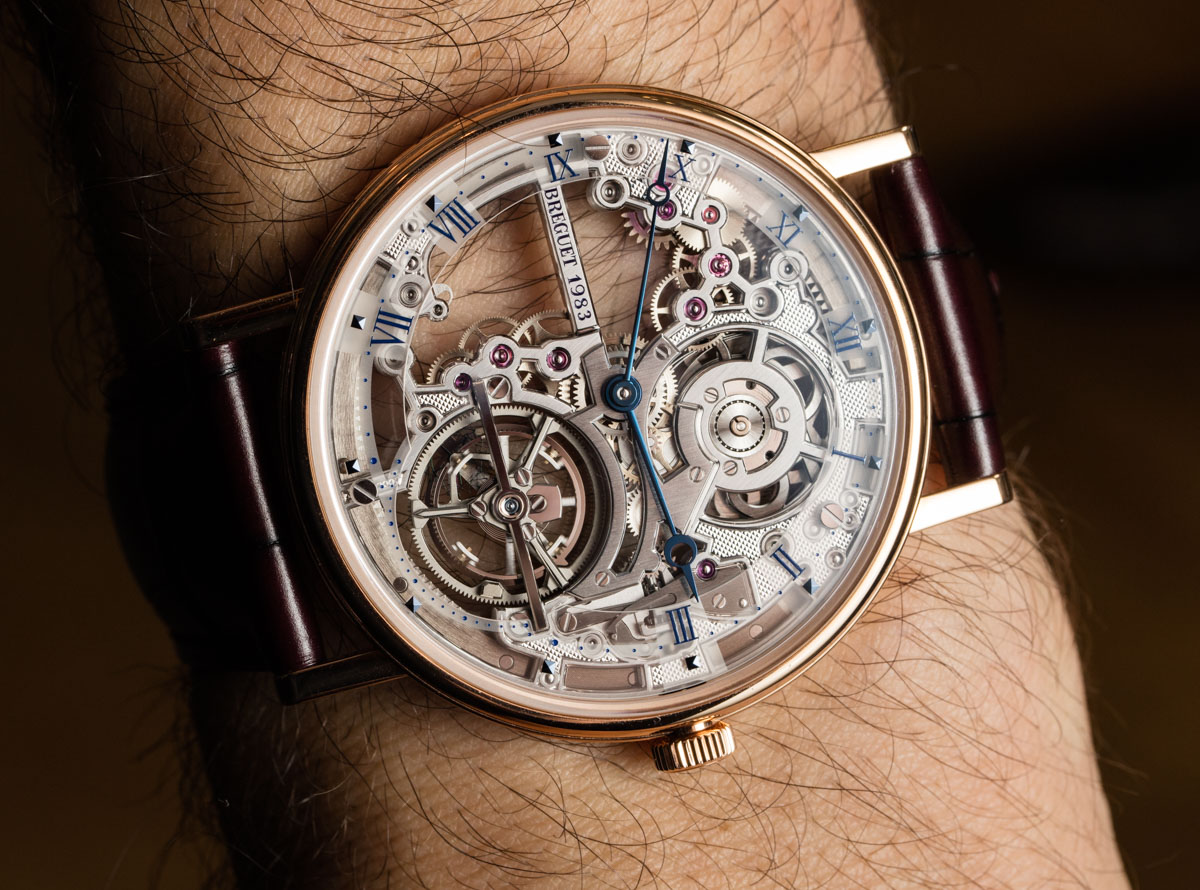 The 581SQ movement is simple but very satisfying, in my opinion. The larger diameter (16 lignes) of the movement allows for the modest, roughly 3mm, thickness. This includes placing the automatic rotor on the periphery of the movement, as opposed to over it. This would not normally be practical with smaller-diameter movements, so the width of the 581SQ is crucial for its ability to be thin. The automatic rotor spins on ball-bearing mountings and is just one of the features that tell people this isn’t their standard high-effort traditional Swiss timepiece. The 581 movement family includes a sophisticated 4Hz frequency regulation system tourbillon that uses a silicon escapement as hairspring. The spinning tourbillon cage doubles as the seconds indicator window and the main dial displays just the hours and minutes. 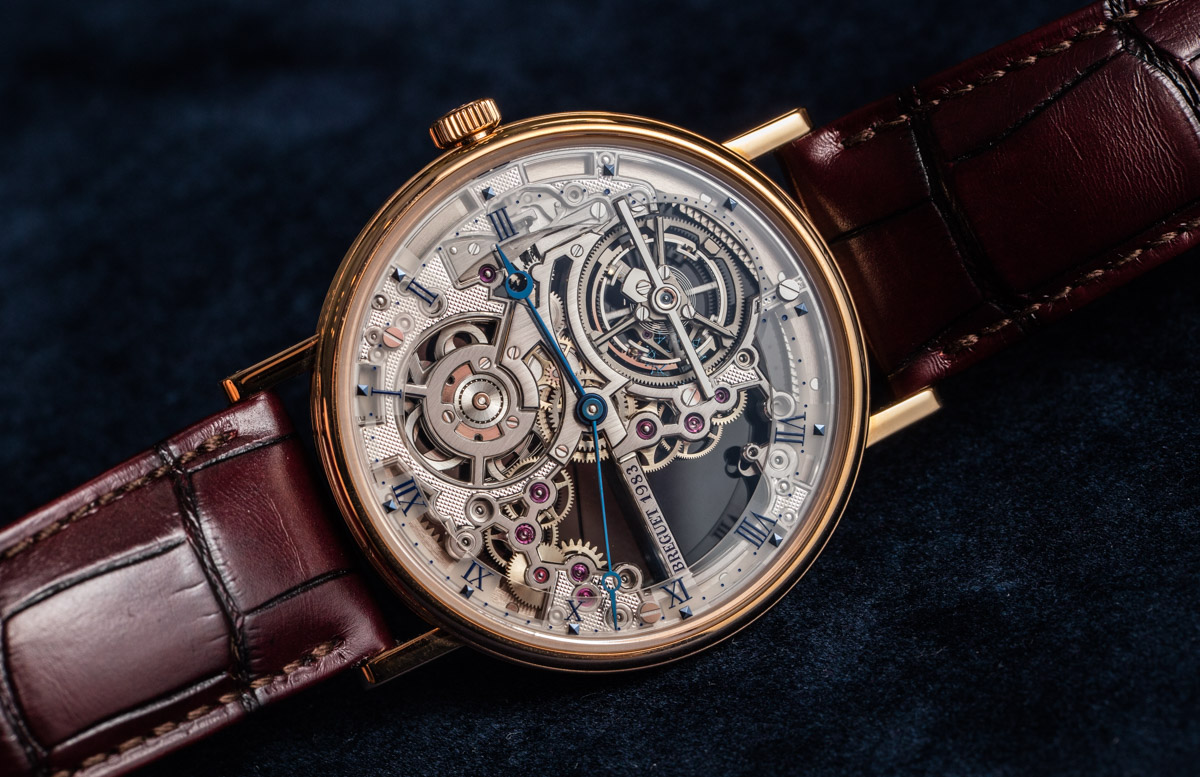 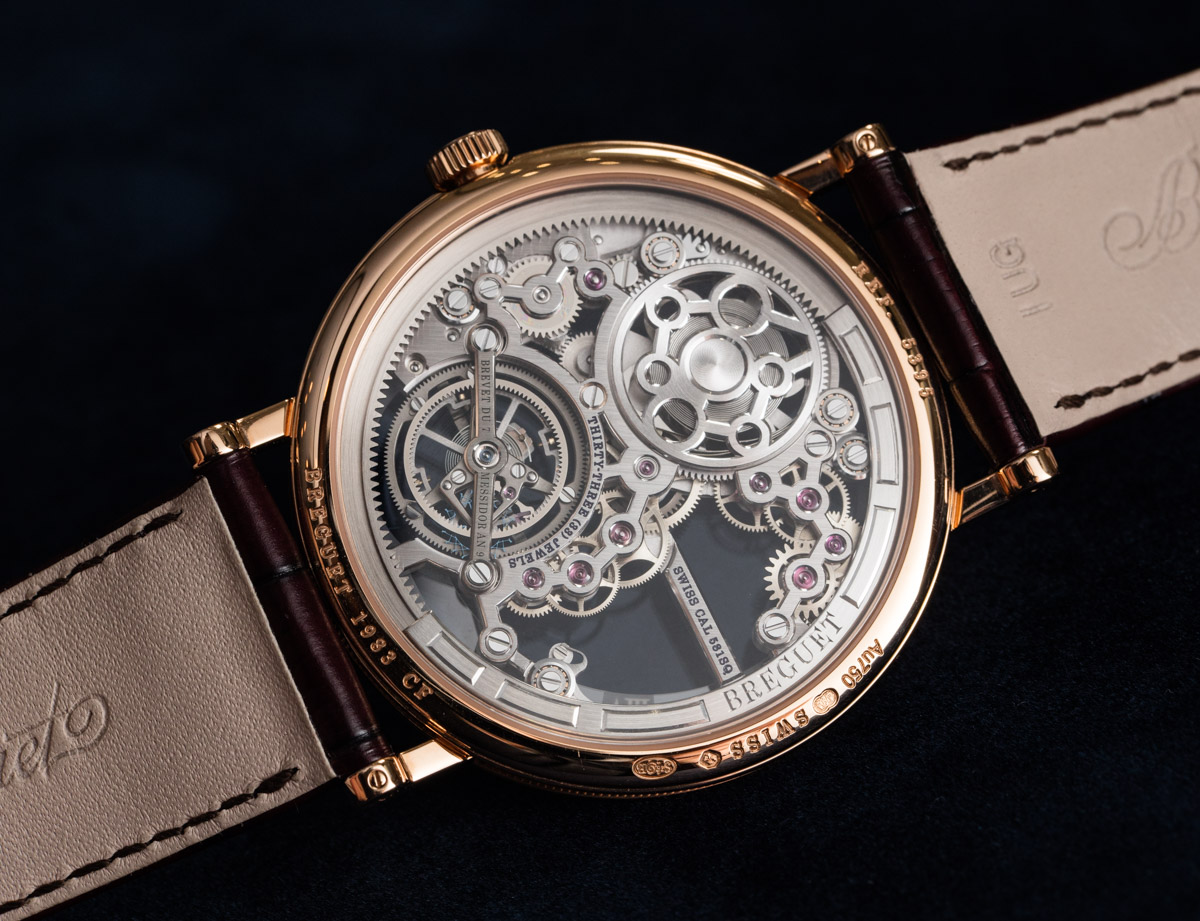 A timepiece like the Classique Tourbillon Extra-Plat Squellete should be considered an exotic watch for everyday wear. It features much more hand-attention and effort than most other classic watches, but it also doesn’t have a look that narrows its fashionability. Skeletonized watch dials are a fashion statement unto themselves, and this is among the most decadent ways of enjoying this type of artistry, while still being able to pair it with most suits or other formal or semi-formal attire. While I don’t necessarily want to stare at my wrist hair each time I gaze at the beautiful skeletonization and decoration work, Breguet wins me over here with its sheer dedication to first making a good timepiece, and second, making an attractive one. Price for the Breguet Classique Tourbillon Extra-Plat Squelette 5395 (reference 5395BR/1S/9WU as seen here in 18k rose gold) is $225,200 USD (a bit more in platinum). Learn more at the Breguet website here.