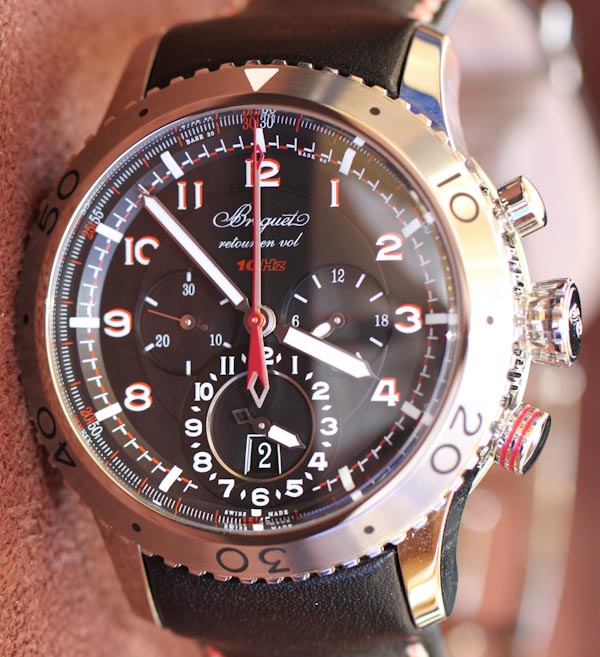 Between the time I originally wrote about this Breguet watch and when it was commercially released, the Type XXII watch changed. My understanding is that Breguet first needed to completely finish developing and testing the movement as well as perfecting the design when I initially saw it in 2010. Last year when the watch was eventually released for sale, consumers ended up with a slighty different product. When people like me go to watch shows we are shown “prototypes” and rarely products which are ready to be boxed up for a customer. “Prototypes” can mean one of these things. Either, “this is a shoddily put together version of the final model that doesn’t look as sexy as it will eventually look…” or, “we haven’t quite finished this watch and need some feedback from people like you and retailers while we make it actually work.” This was the latter I believe.

What’s wrong with that approach? A few things, and a lot of brands do it to their detriment. But there is an easy fix, and I did discuss it with my friends at Breguet. First let me say that I love how the Type XXII 3880ST watch came out. I first discussed the Breguet Type XXII watch here. I loved how it looked back then but felt that the dial was confusing to understand. I don’t blame Breguet because the Type XXII watch was their first entrant in the world of 10Hz speed mechanical movements. Not only was this piece complicated to get working reliably, but creating a dial around seconds hands that move around the dial in 30 seconds and not 60 seconds is tough. Plus, Breguet wanted to include as much functionality in the in-house calibre 589F automatic movement as possible. 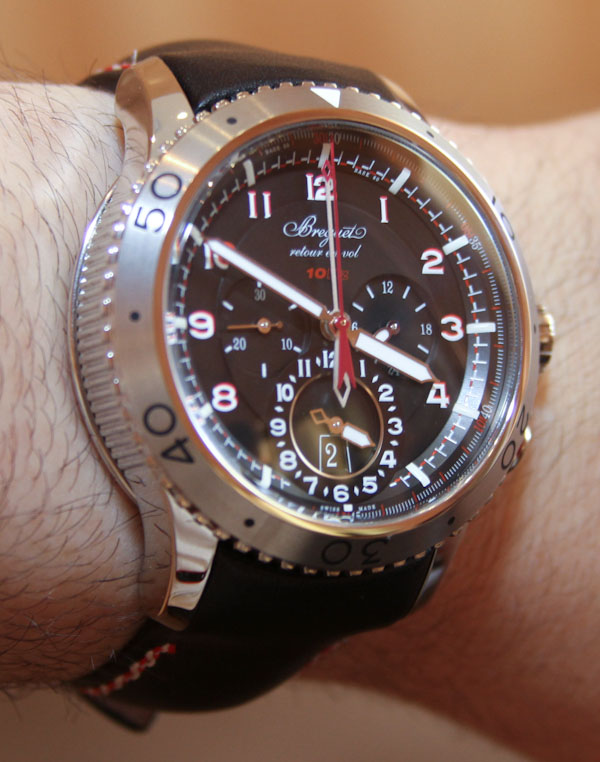 OK, so getting back to that problem I was referring to. Breguet releases information on the prototype Type XXII and then shows it to the press. We merrily discuss the new watch over the next few months and then think little of it unless the brands spray us with PR messages asking us to pay attention to the piece again. Some time later, Breguet releases the final version of the Type XXII to shops and it isn’t the same watch us members of the watch media wrote about. Worse yet, they don’t update the watch media that the final retail version is a little bit different than the prototype. This causes at least two problems – consumers are potentially misled about what to expect in the store and also, consumers aren’t ever made aware through watch media when the products they are interested in are finally commercially available. It can be months to years before watches us writers get to check out are finally available for purchase. That time to market figure changes all the time, and rarely are watches available for purchase when we write about them. What brands need to do is an additional PR (public relations) push when a product people are waiting for is finally being shipped to retailers, and of course include information on how and if those watches may have changed (because it is usually for the better). More so, I will claim that watch brands need to do a better job of helping the watch media tell consumers where to actually buy or get simple information about where to buy watches. They know watch buyers read watch media, so then why doesn’t it make sense for watch brands to use the watch media to tell people the products they are waiting for are ready for purchase?

OK, enough with that. Moving back to Mr. speedyhands – the Type XXII timepiece. I was with Breguet at their boutique here in Los Angeles checking out… well watches. They showed me the Type XXII 3880ST watch and i immediately noticed that it was different than the piece I previously discussed. The most noteworthy change was the removal of the linear indicator under 12 o’clock. Everyone thought it was a power reserve indicator – but it wasn’t. It was actually part of the minute counter for the chronograph. Don’t ask… it has been removed. The scales on the dials also changed. I think for the better. In addition to being more colorful, the scales are more useful for reading the 60 minute chronograph. 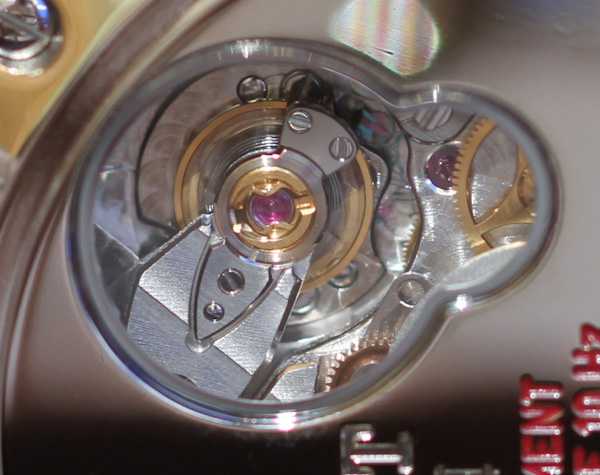 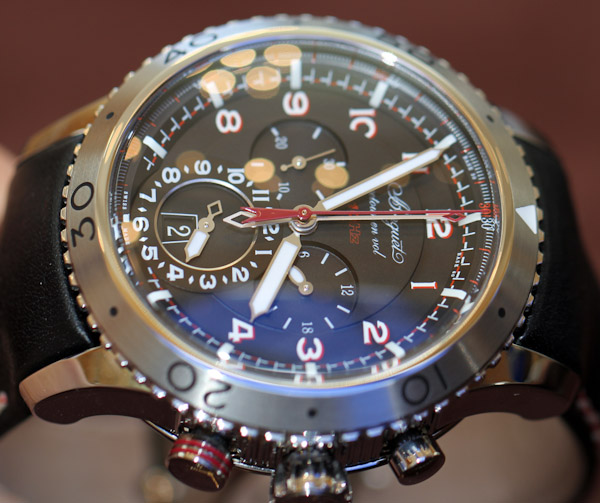 On the rear of the watch is now a small sapphire crystal viewing panel to see the escapement. This is a big benefit as the 10Hz movement vibrates at 72,000 beats per hour. That is well over twice as fast as your standard mechanical Swiss automatic that operates at 4Hz. This high speed movement is supposed to be more accurate, allows for you to measure 1/10 of a second increments with the chronograph, and also makes the piece more modern. Well more modern in a sort of anachronistic way, but you gotta love the power of silicon. Look closely and you’ll see the blue-colored silicon balance spring and escapement. Unlike the large escapements found in slower operating movements (such as the UNITAS for example), high-speed ones are usually quite petite. This is because of air friction and how fast they move.

The cleaner looking dial on the Type XXII watch is beautiful. I still love the red and white colors. If there was a dash of blue in there I would think of the French flag. Not the American flag for some reason. Come to think of it, the red and white tones do match the Swiss flag. OK, I am overdoing it with that mental connection. What does that Type XXII watch do? Well it has the time, date, second time zone and 60 minute chronograph. And it does all that with only seven hands! 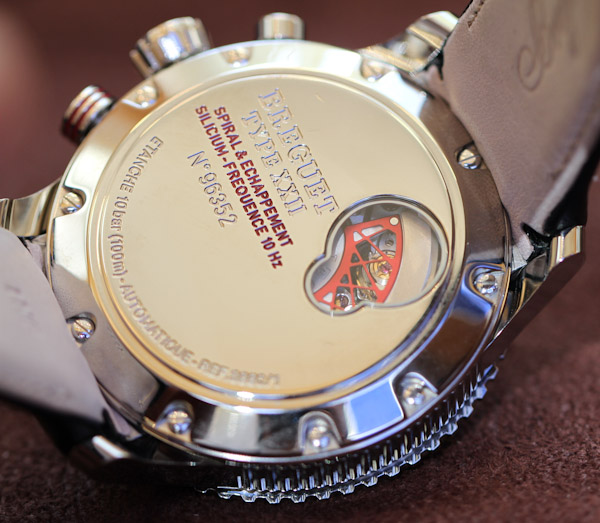 The chronograph function in the Type XXII 388ST doesn’t use any of the subsidiary dials. Instead, it uses two centrally placed hands for the seconds and minutes. The chronograph seconds hand moves around the entire dial each 30 seconds. Yes, it can get confusing. The minute hand “steps” two times each minute. Meaning there is a halfway position so that you know if the chronograph seconds hand is measuring the first or second half of that corresponding minute. Using the hash marks on the periphery of the dial, you can determine the 1/10 of a second fractional reading.

The subdials on the face are for the subsidiary seconds (also shown on a scale of 30 versus 60 seconds), and two dials for the second time zone. By the way, the hands that move around the dial each 30 seconds move quite quick. The large lower subdial has the hours of a second time zone. You read the minutes with the normal minute hand. Then there is a 24 hour indicator (AM/PM) indicator for the second time zone (reference time). The date is placed above 6 o ‘clock. Overall the dial is beautiful, and while still quite quirky, feels much more legible than the first time around. 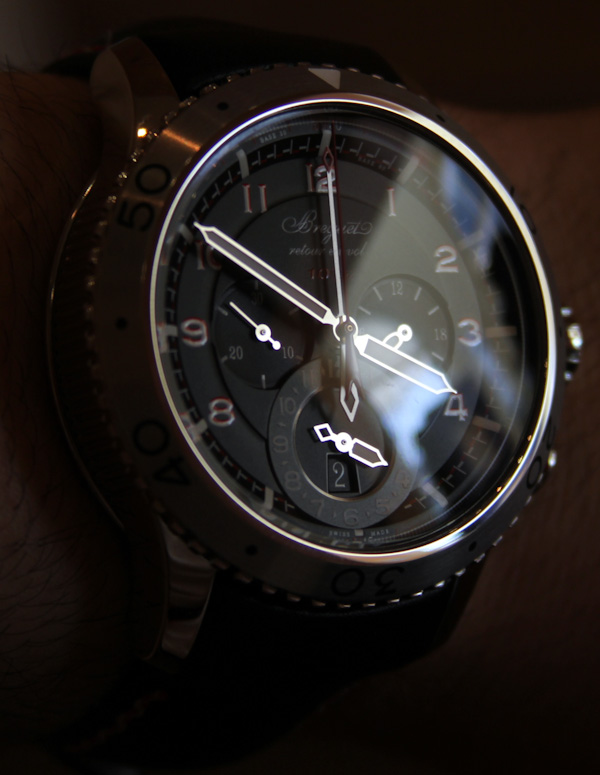 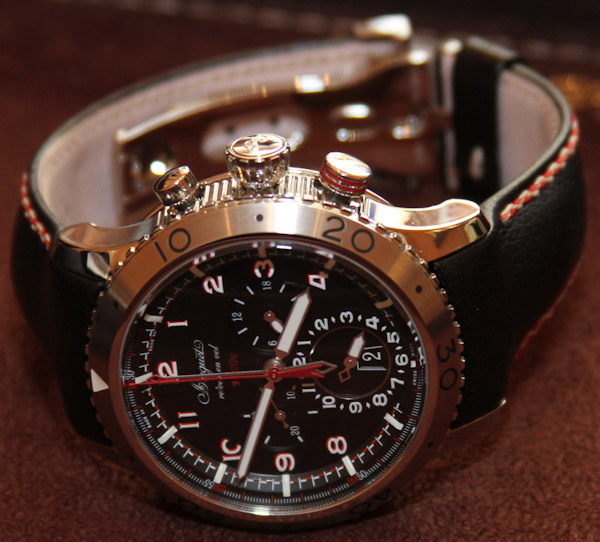 Breuget still uses a steel case for the 44mm wide Type XXII 3880ST watch. It is quite thick at about 17.3mm. Another new element on the dial is the “10Hz” label which is a bit of a logo at this point. We saw it as well on the Breguet Classique Chronometrie 10Hz watch (discussed here). These wonderful high-rate silicon-based Breguet watches are cool and beautiful. Are they useful from an horological perspective? To be honest I am not sure. Get them for what you think they could be, versus what they actually are. Price for this hummingbird of a Breguet is in the range of $19,000.