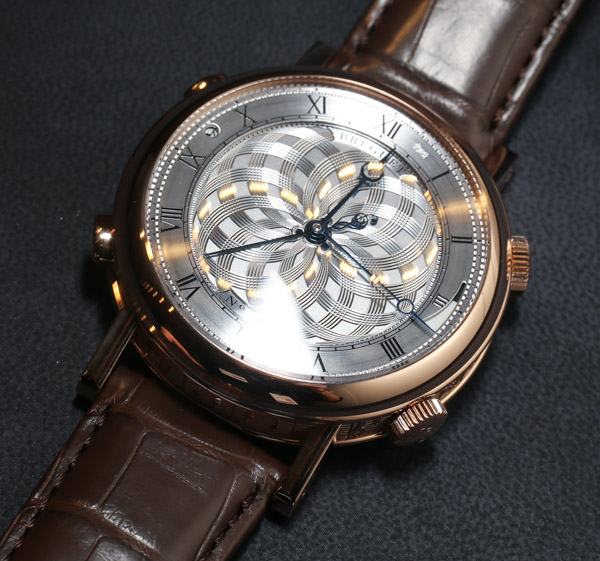 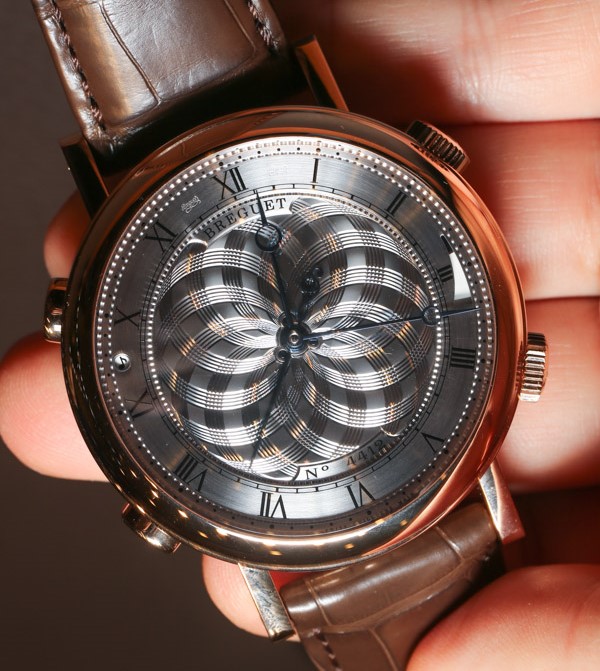 Did you know that like Omega, Breguet makes use of Liquidmetal? The special technology was purchased by Omega (via the Swatch Group) a few years ago for the production of bezels and dials. In the case of the Classique La Musicale 7800, Liquidmetal is used inside of the watch to create a better resonance system for the musical alarm function. Liquidmetal is apparently used in the production of the metal membrane which works with a series of blades that create the music box-style function inside of the watch. The tune is Bach if you didn’t notice.

The Classique La Musicale isn’t a brand new watch for 2013, but this particular ref. 7800BR/AA/9YV 02 model is. What is new is the song played as well as the design of the engraving on the dial. Despite the impressive detailing, the watch’s special features are easily missed by just seeing the dial. Little details such as the music notes engraved into the side of the case and the clef counter-weight on one of the hands tips you off that there is something special going on here. What you have is a movement that has an alarm which when activated, plays a song. Breguet has wonderfully over-engineered the entire system to a degree that only people very experienced with musical watches will be able to appreciate what went into the design.

The 18k pink gold case is on the larger side at 48mm wide, which you will forgive once you play the music. Turn the watch over and you see vents which are part of the acoustic system. There is a spacial gap between the caseback and the true back of the watch to offer better resonance. Nevertheless, the watch still offers 30 meters of water resistance (enough to wash your hands really). Even though the music function is connected to the alarm, it can of course be activated on demand via a pusher at 10 o’clock. You’ll need that when wanting to show it off to friends.

Breguet seems to refer to the movement inside of the Classique La Musical as both the caliber 777 and 901. It can’t be both, but I suspect it is the 777. The 901 may be a base automatic upon which the music functions are built. The movement is actually an automatic – which I found surprising given the fact that it needs a lot of space for the moving music box disc and blades. It operates at 4Hz and has 45 hours of power reserve with the sound function turned on (55 without). A pusher allows you to activate or deactivate the alarm function. Though with it on you’ll probably need to still manually wind the watch a lot. You have to expect that if you wear a timepiece such as this you are going to play with it an awful lot.

Almost hidden on the dial are an on/off indicator for the alarm, as well as a power reserve indicator. There is no running seconds hand, but rather a centrally mounted alarm setting hand (that has the clef counterweight). Traditional pomme-style hands in blued steel are used for the hours and minutes. One of the most unique features that you’d never learn about unless you got to see the watch is that the entire middle of the platinum-plated engraved dial spins when the music is playing. It further plays for a full 20-25 seconds. The song is Bach’s Badinerie which is part of his orchestral suite number 2. 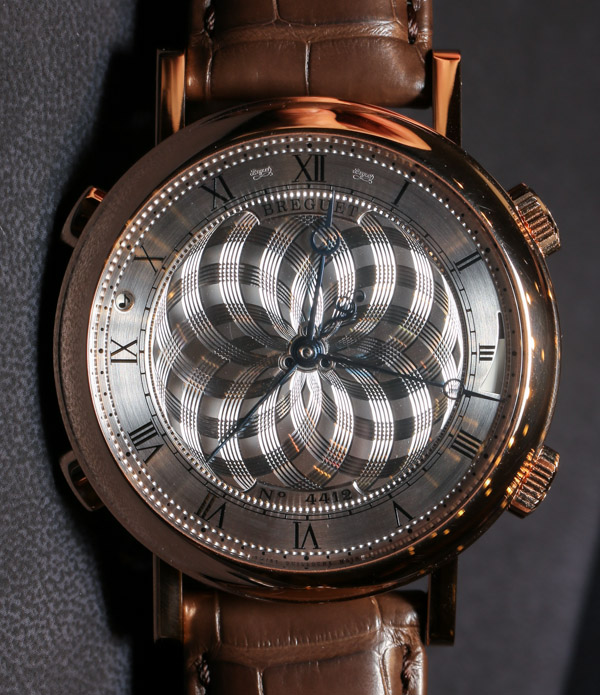