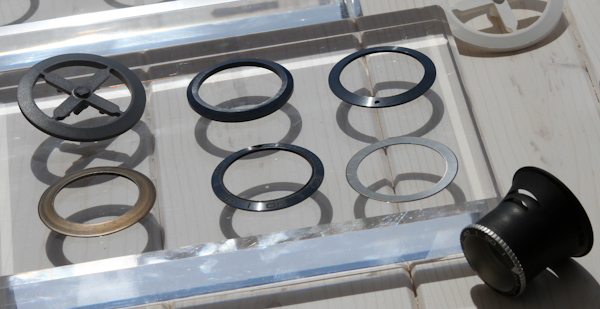 The modern arms race with watches isn’t about gears and pinions, but rather materials. It may appear that brands are hot on beating each others’ movements but they know that such a war would be a joke. The race for the most accurate movement slowed to almost a halt when quartz watches hit the scene, and there are almost no new viable complications to be invented. The secrecy and excitement in the world of high-end watches is all in discovering, creating, and exploiting the hottest new materials.

We’ve seen this over the last 10 years more than ever. Ceramic, titanium, carbon fiber, silicium, and other new or previously under-utilized materials are more than common now. Even within those categories are new alloys, manufacturing techniques, formulations, uses, and colors. For those who only get hot and bothered by calibers, I say start looking outside the watch more often. 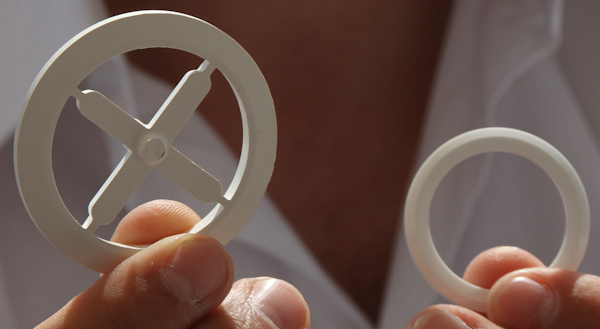 In about 2009 Omega announced that it would be using a new type of material called Liquidmetal. What arrived soon after was a limited edition Seamaster Planet Ocean with a black liquid metal dial (that I wrote about here). It seemed to be Omega’s answer to Rolex’s Cerachrom bezels. Like those of Rolex, Omega’s liquid metal watches would combine metal and ceramic. The purpose? To create better looking, more durable bezels than ever before — but is that all?

No it turns out. Omega is experimenting with dozens of applications for the special alloy. Not only for itself, but for the Swatch Group overall. So what is Liquidmetal and how did it end up in an Omega watch? 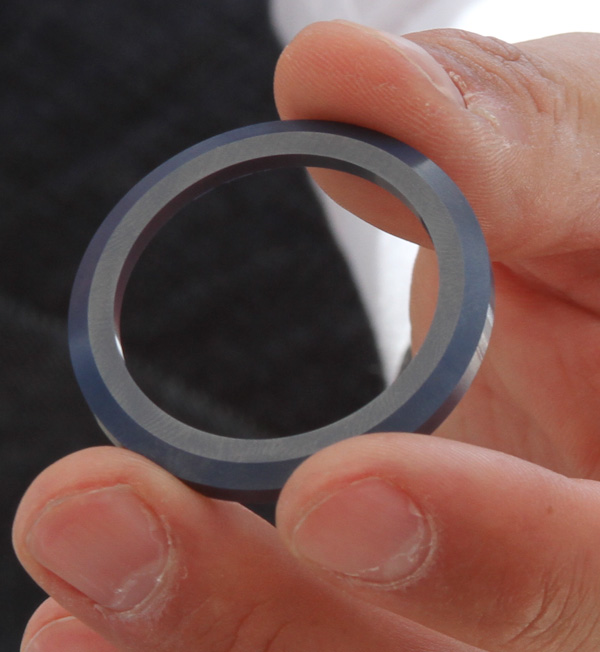 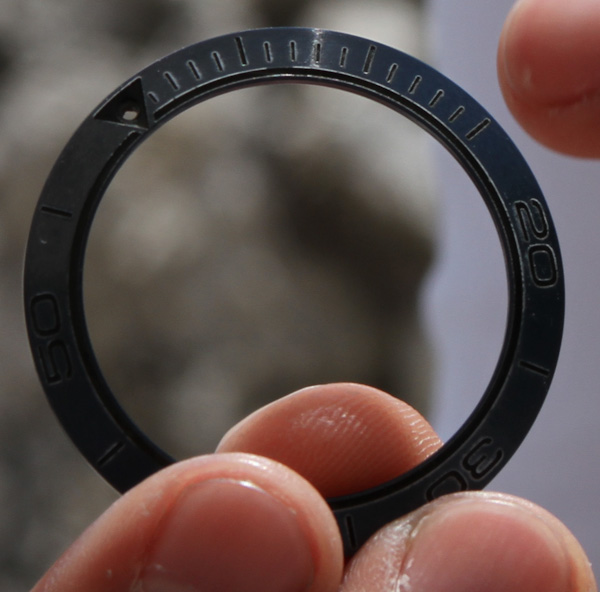 Liquidmetal Technologies is actually an American company and Liquidmetal is an alloy. I am no chemist so I won’t go into all the details here. In fact, I previously wrote an article on Liquidmetal here. It is a mixture of zirconium, nickel, and several other metals. It has the curious property of being quite elastic and has the ability to cleanly melt and become malleable. All metal can become a liquid, but Liquidmetal’s special draw seems to be the malleable nature that it takes during its liquid form.

After briefly experimenting with Liquidmetal Omega decided to license the exclusive right to use the material. I don’t know details of the agreement, but don’t expect to see Liquidmetal in watches outside Omega — or the Swatch Group. What Liquidmetal didn’t come with was the ability to industrialize the process of using it. Omega buys the alloy in rods from the US and then must do all the work themselves. The reason Liquidmetal is in so few Omega watches at this time simply comes from the fact that Omega is still working out how to manufacture components with Liquidmetal in mass quantities — again, to industrialize the process. 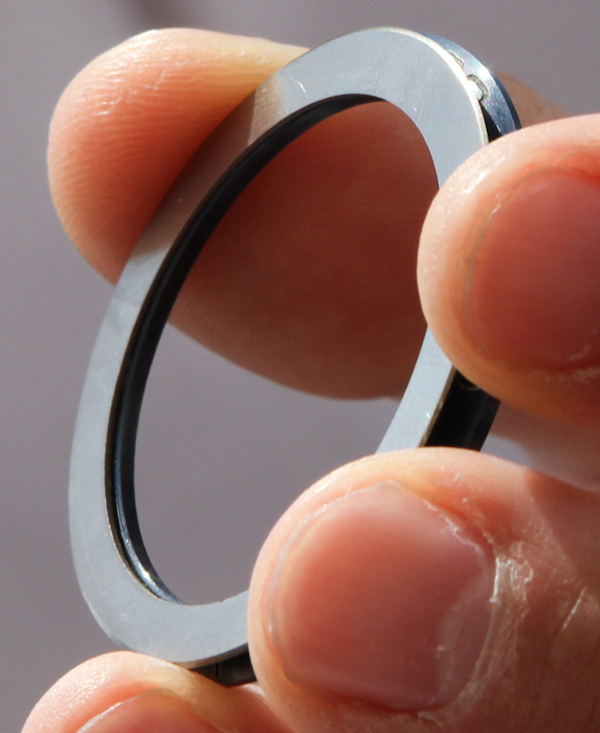 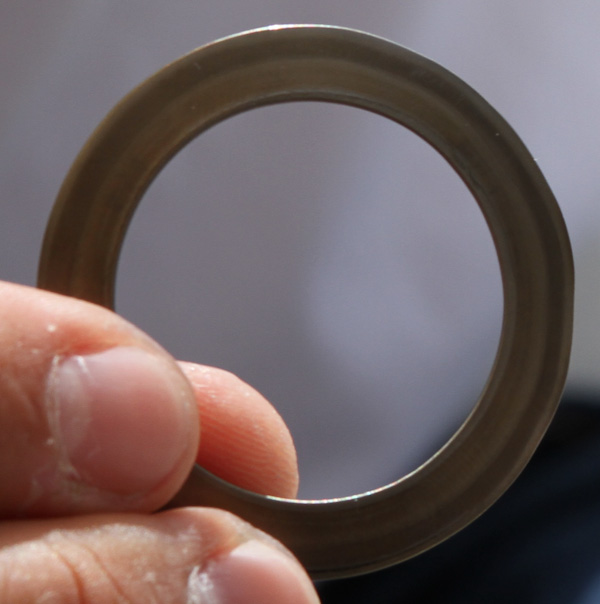 A completed Liquidmetal bezel is ceramic with Liquidmetal filled in to display the Arabic numerals and markers on the diver’s 60 minute scale. Omega was kind enough to have one of their technical people explain the process complete with examples of the process. As this was explained to me, I quickly realized what a pain in the ass industrializing the process of creating these bezels must be. Omega hopes to use Liquidmetal for other watch components in the future. They hope this will include dials, possibly cases, and elements of the movements.

Creating a Liquidmetal bezel starts by creating the ceramic base part. Omega currently makes black, blue, and white ceramic bezels. They are working on orange of course, but they don’t quite have the color down. To create a ceramic bezel a zirconium oxide and plastic ring is created. Plastic is what actually gives the ring its color, but the plastic itself is removed in the process. These initial rings look like little wheel complete with four spokes. They are baked at temperatures of over 1000 degrees. This baking process shrinks them and removes all the plastic particles. What is left is a smaller, colored ring of smooth ceramic. 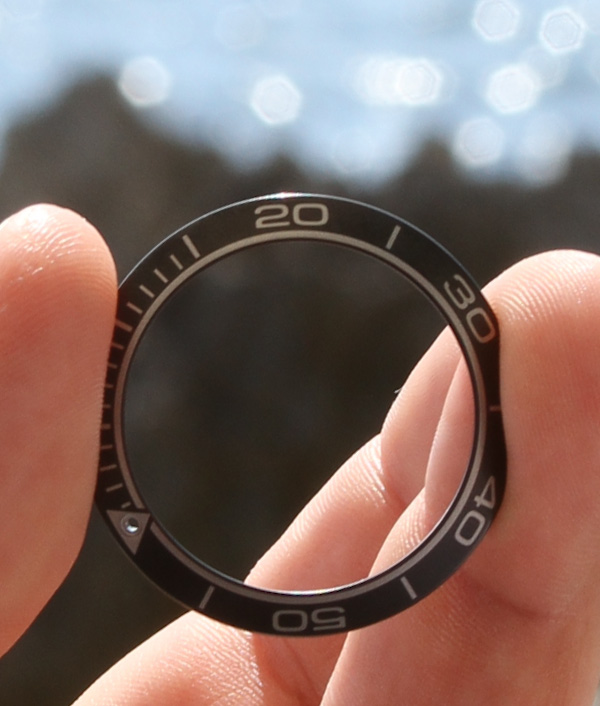 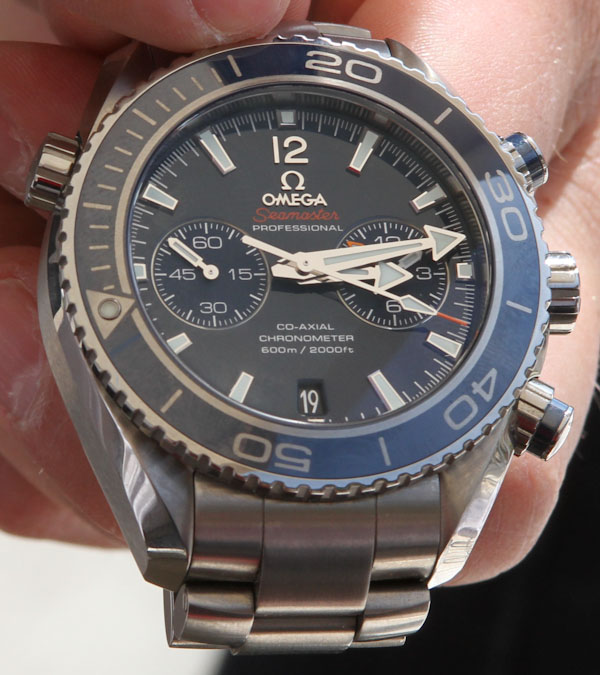 The ring is then cut and shaped into the bezel insert. Most bezels are inserts that fit into the rotating bezel mechanism. The colored ceramic ring is carefully cut and then polished. Ceramic is very hard so cutting them is a slow and difficult process. The next step is to engrave the bezel markers and numerals. This is done with a special laser engraver. According to Omega it takes about 15 minutes to engrave just one bezel with the laser. At this point you have a perfectly shaped ceramic bezel with the indicators engraved into its surface.

Now it comes time for the Liquidmetal. Omega cuts a thin, flat ring of Liquidmetal that is placed over the ceramic bezel and is literally compressed into it using a special pressure and heating process. According to Omega the cost of this small part is about $50 alone. This part of the production results in what is humorously the ugliest piece of the process. A bezel with metal melted over it. At this point Omega performs what is the most magical part of the process, and why the Liquidmetal is so important. While the Liquidmetal appears to cover the bezel, it also has seeped into the laser-cut engravings. Because the ceramic and Liquidmetal have different melting temperatures and behaving differently to polishing — Omega can literally polish off the excess Liquidmetal and retain the finish on the ceramic without damaging it. 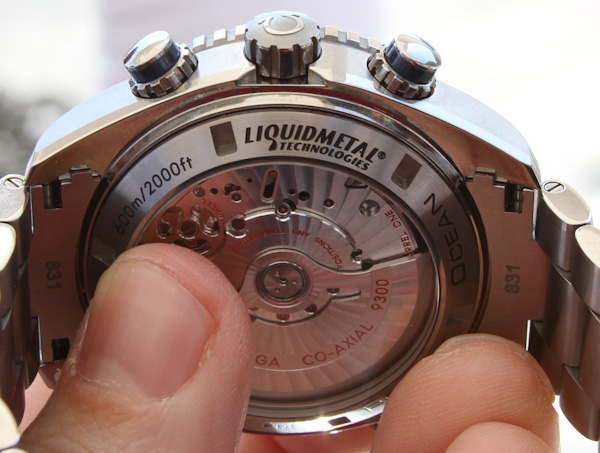 A completed ceramic and Liquidmetal dial has strength, durability, and wear-free colors. It also looks pretty darn cool (click here for more on this Seamaster Planet Ocean Liquidmetal watch). The logical question people keep asking is, “will Omega offer Liquidmetal bezels with all of their watches?” Omega would like to say yes, but the process is still too new to promise such mass adoption. For now Omega is focusing on offering Liquidmetal dials on as many Seamaster Planet Ocean watches as possible. In 5-10 years from now it is hard to tell how widely it will be used within their product range.