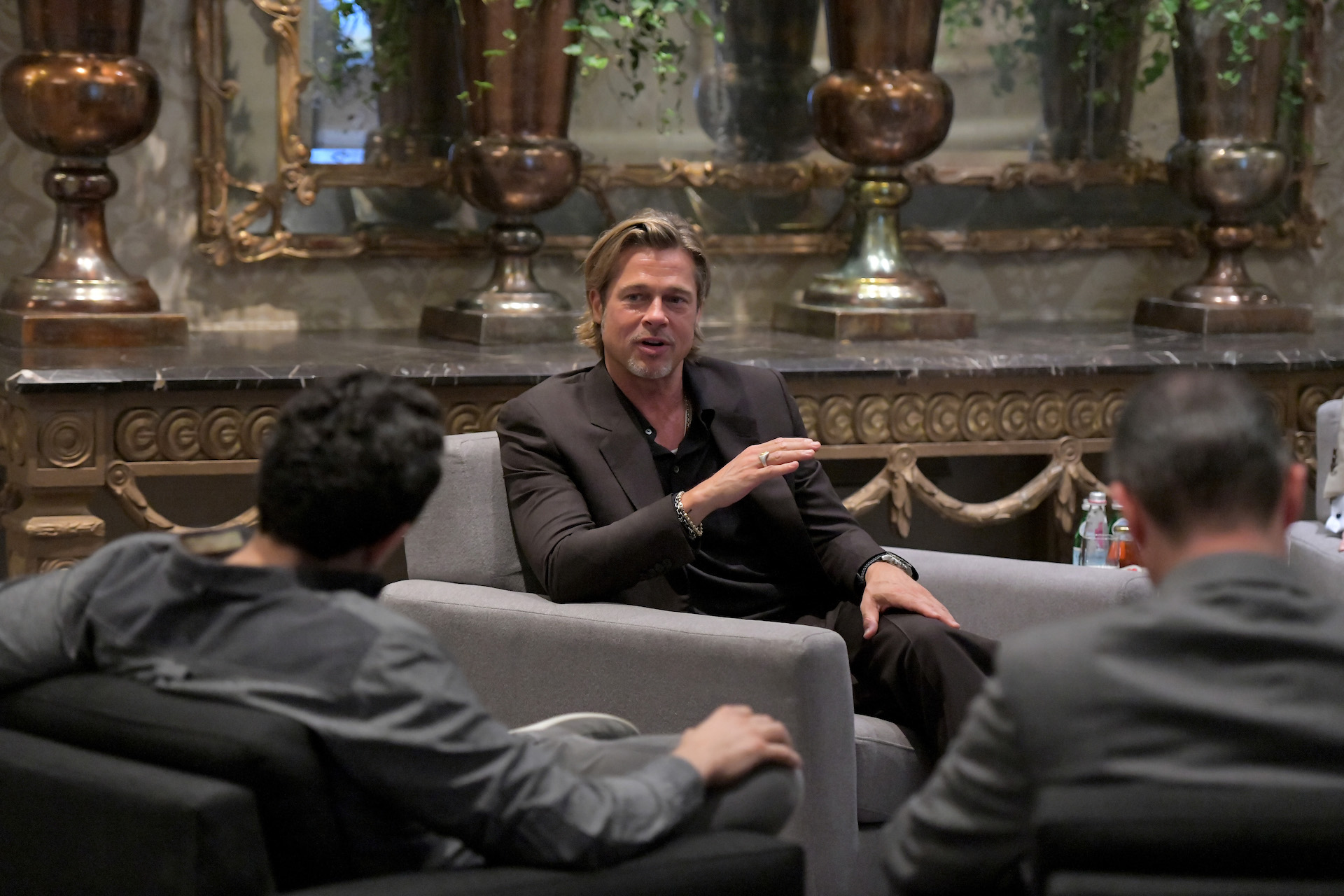 If you’ve seen Brad Pitt on-screen (and I’m not sure I know anyone who hasn’t), you have a pretty good idea of what Brad Pitt is like in real life. At least that was my experience when I had a rare opportunity to interview the megastar actor in Los Angeles. Pitt also happens to be a known wristwatch aficionado — so the conversation proved interesting, given that the context was timepieces. The occasion was Breitling formally unveiling Brad Pitt as its newest brand ambassador as part of the brand’s Hollywood “squad” during a recent Breitling Summit event here in LA.

Pitt didn’t want to speak with many members of the media, and my understanding is that, at the time, he only wanted to speak with a select number of watch journalists — myself being one of them. While waiting to meet him, I started to ponder if I could recall any special watches he wore during movies. What came to mind was the quirky little bullhead chronograph on a bund strap he wore the entire time in Quentin Tarantino’s latest movie, Once Upon A Time In Hollywood. My mind later returned to his watch in that movie when Pitt told me that he actually chose watches for his characters on multiple occasions. Why? He just couldn’t stand to wear the relatively inexpensive or unimpressive watches given to him by a film’s propmaster. So he just ended up “buying his character a watch that fit better.” That’s the type of dedication to detail that has helped Brad Pitt deliver so many consistently satisfying performances. 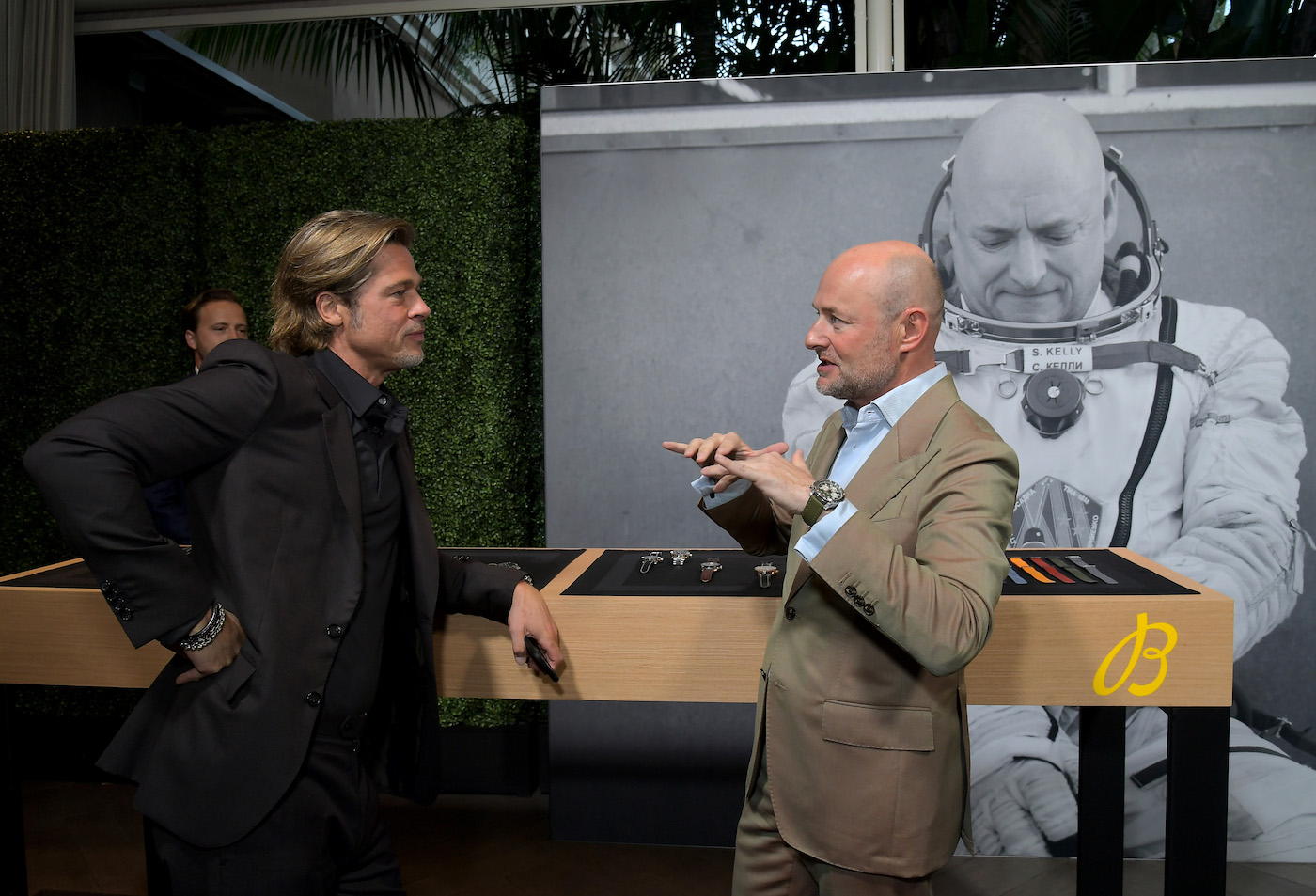 In Hollywood, stars get to request things like “no recording at this interview.” My time with Pitt was obviously memorable but not something I have a lot to directly share. For that reason, I’m not going to be giving direct quotes and, while I was warmly greeted by the man, I wasn’t going to harangue him for a selfie. He gets enough of that, I’m sure. I was more jazzed that he was excited to talk about his passion for timepieces — something we both thoroughly share in common.

Sitting across from Brad Pitt was Breitling CEO Georges Kern, eagerly happy to be sharing the brand’s latest slice of personality. But he gets a pass since it is pretty hard not to smile when one of the world’s most recognizable smiles is gleaming at you and talking about his pickiness when it comes to wristwatch taste.

I never asked Brad Pitt, “Why Breitling?” but I wanted to. The gentleman, no doubt, has his pick of luxury watch brands to work with. Interestingly, I did ask him if, among his peers, it was considered prestigious and a point of pride to have a business relationship with a luxury watch brand. He immediately agreed that it was and that doing so could earn respect and status. He went on to describe how, at a certain point in a popular performer’s life, they begin to consider how they will be remembered, their legacy, and about the type of persona that will earn them respect beyond their days on this planet. Having an established and stable name in luxury choose you to be part of its outward persona is sort of mutually flattering. It not only helps the brand but can, in a real way, help the ambassador (assuming the brand fit is intelligently done). 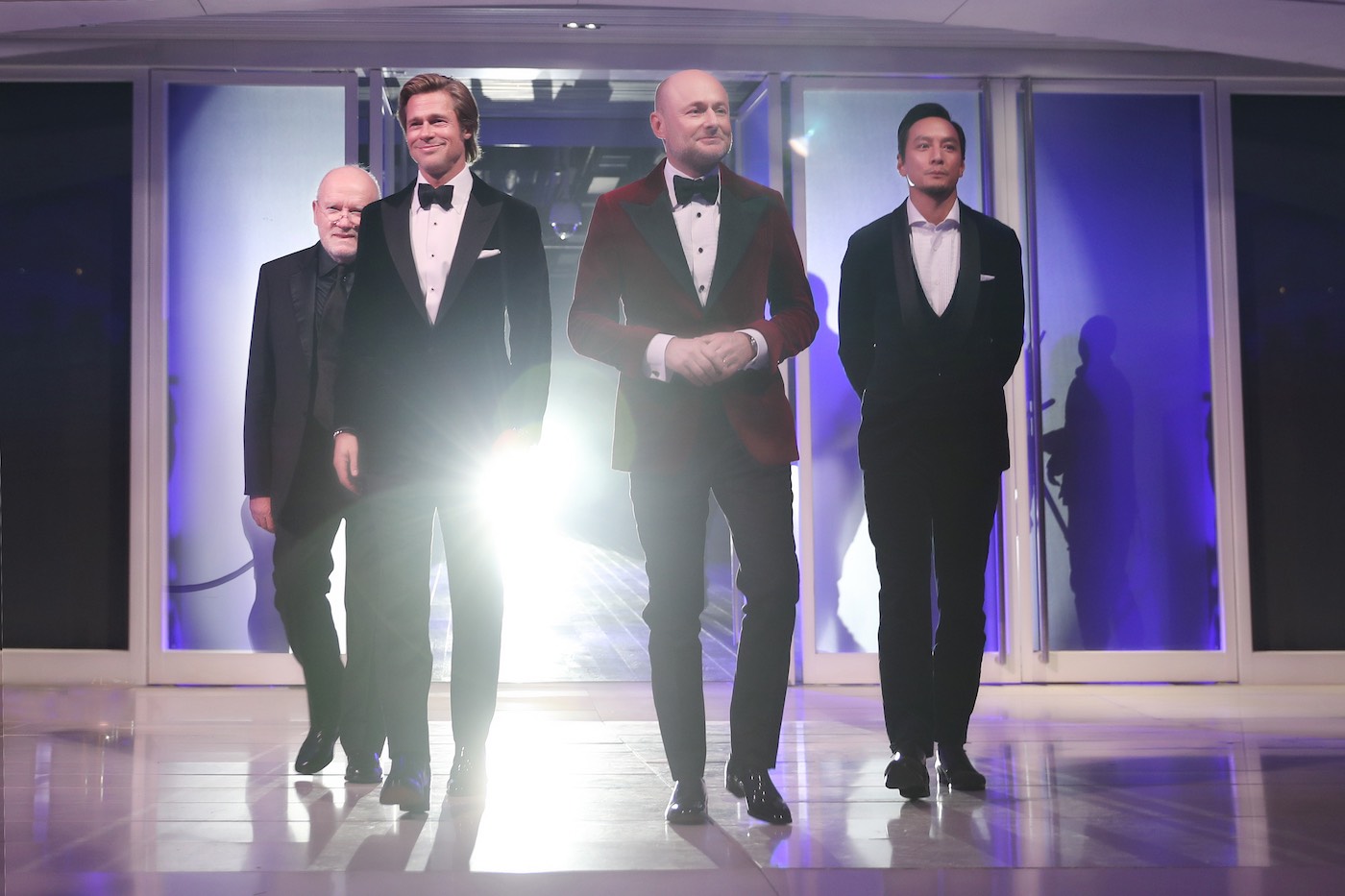 So, why Breitling? I certainly think of Mr. Kern as being the engine behind it. Since his days at IWC, Georges Kern has proved more capable of earning the attention and brand-friendship of celebrities like no other watch brand CEO I can think of. His secret? According to him, authentic relationships. Actors and other stars are often turned off from overly business-style relationships with brands. When money is less an issue, for them it is about spending time with like-minded individuals, having fun, and being handed great toys to play with!

Breitling, as a brand, is also no slouch. Depending on who you ask, it is either number three or number four in luxury watch sales in the United States (its biggest market) and is actually doing remarkably well in China, where it is still relatively new and where people certainly admire actors like Brad Pitt. In a lot of ways, Breitling embodies the “culture of beautiful machines” that seasoned tastemakers like Brad Pitt are known to admire. And Mr. Pitt isn’t a very flashy guy when it comes down to it. In fact, more often than once he repeated two interesting concepts that help define not just his taste in timepieces, but also in all things that involve a strong sense of aesthetics: precision and minimalism.

When I say minimalism, I mean it in the more strict language of design lexicon. What Pitt actually said was that he didn’t like things with unnecessary stuff. After years of sampling endless luxuries and experiences, Brad Pitt has naturally become an aficionado of “good vibes.” He has become understandably impatient with “extras” and prefers products with both a purpose (a good tool) and a focus (no unnecessary elements to take away from what it is meant to do). That is more akin to what minimalism is (refining something down to a core theme) as opposed to “simple,” which is what many wannabe minimalist products actually are. 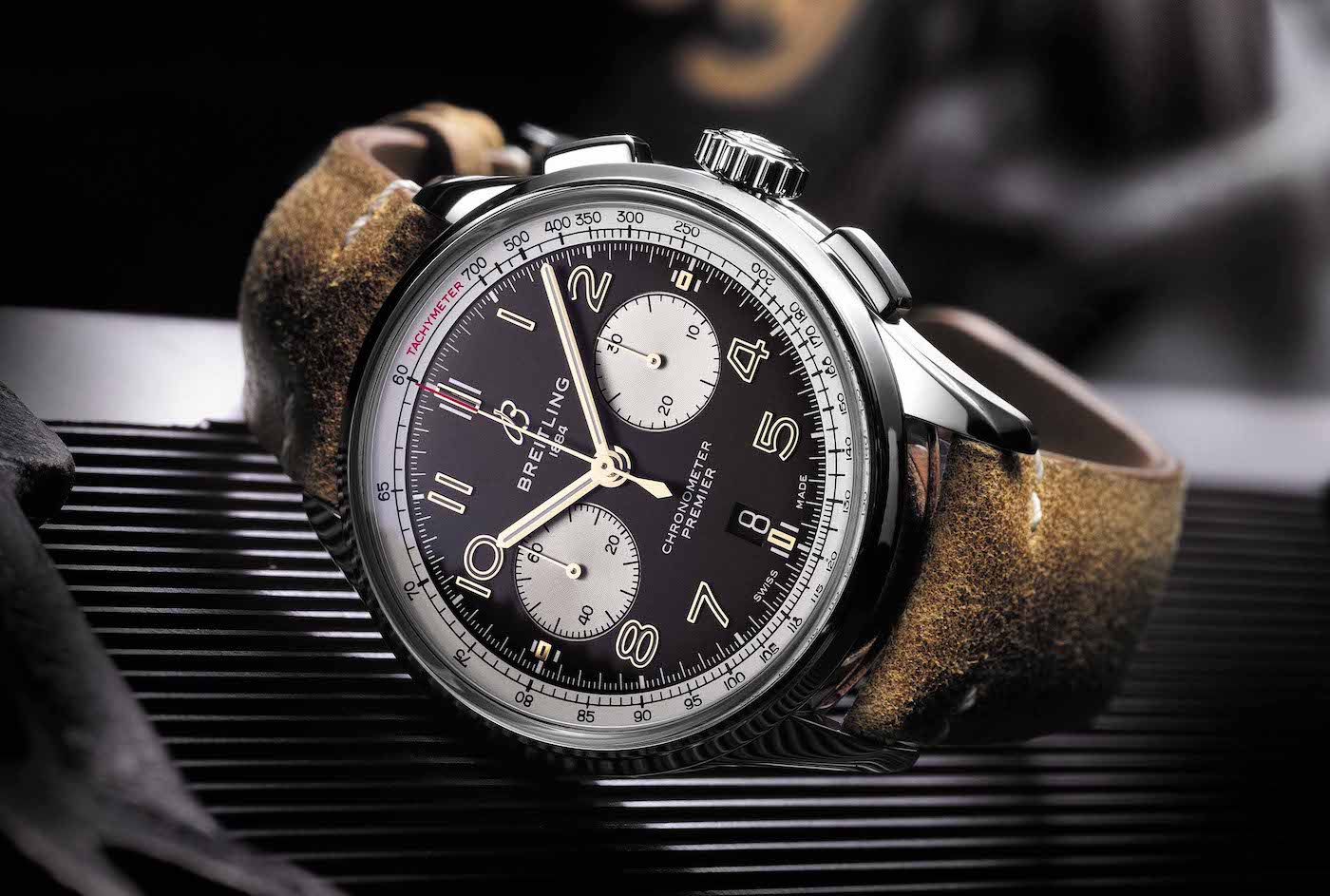 And wouldn’t it be wrong to ever refer to someone like Pitt’s taste as simple? I think it would be a total contradiction in terms. What makes people like Pitt valuable when it comes to the luxury industry is the fact that they have been given an opportunity to see and sample so many types of places, foods, products, treatments, machines, vehicles, etc… Pitt and his peers should all have extremely refined luxury tastes simply because of their exposure. Want to know who makes nice clothing? Ask someone who has worn literally thousands of outfits from top brands. Want to know who makes the smoothest driving cars? Ask someone who has driven around in them. Want to know who makes watches that make you look like a Brad Pitt movie character? You know who to go to for advice.

It would have been rude to bring up other watch brands when the brand of the hour is Breitling. Mr. Pitt has, indeed, owned plenty of other watches, but there was more than enough to discuss when it came to Breitling. His first Breitling watch? It wasn’t me who asked him, but it turned out to be one of the original Emergency watches. Apparently, Pitt discovered it, thought it was super-cool (it was… and still is), and bought one for himself and for several crew members on a project he was on. Since then, he has had nothing but affinity for the brand.

I also happen to think Brad Pitt is a serious gearhead like us. At least, that was the only probable message I could gather from the excited look on his face when he talked about MotoGP motorcycle racing. As I said above, Pitt expressed his interest in “precision” more than one time. It has been stated by many people that the most precise item a man can wear (and get away with) on his person is a wristwatch. Brad seemed to understand this and mentioned that he felt “complete” when wearing a nice watch — even if the rest of what he had on was unimpressive. Indeed, a nice watch doth maketh the man. 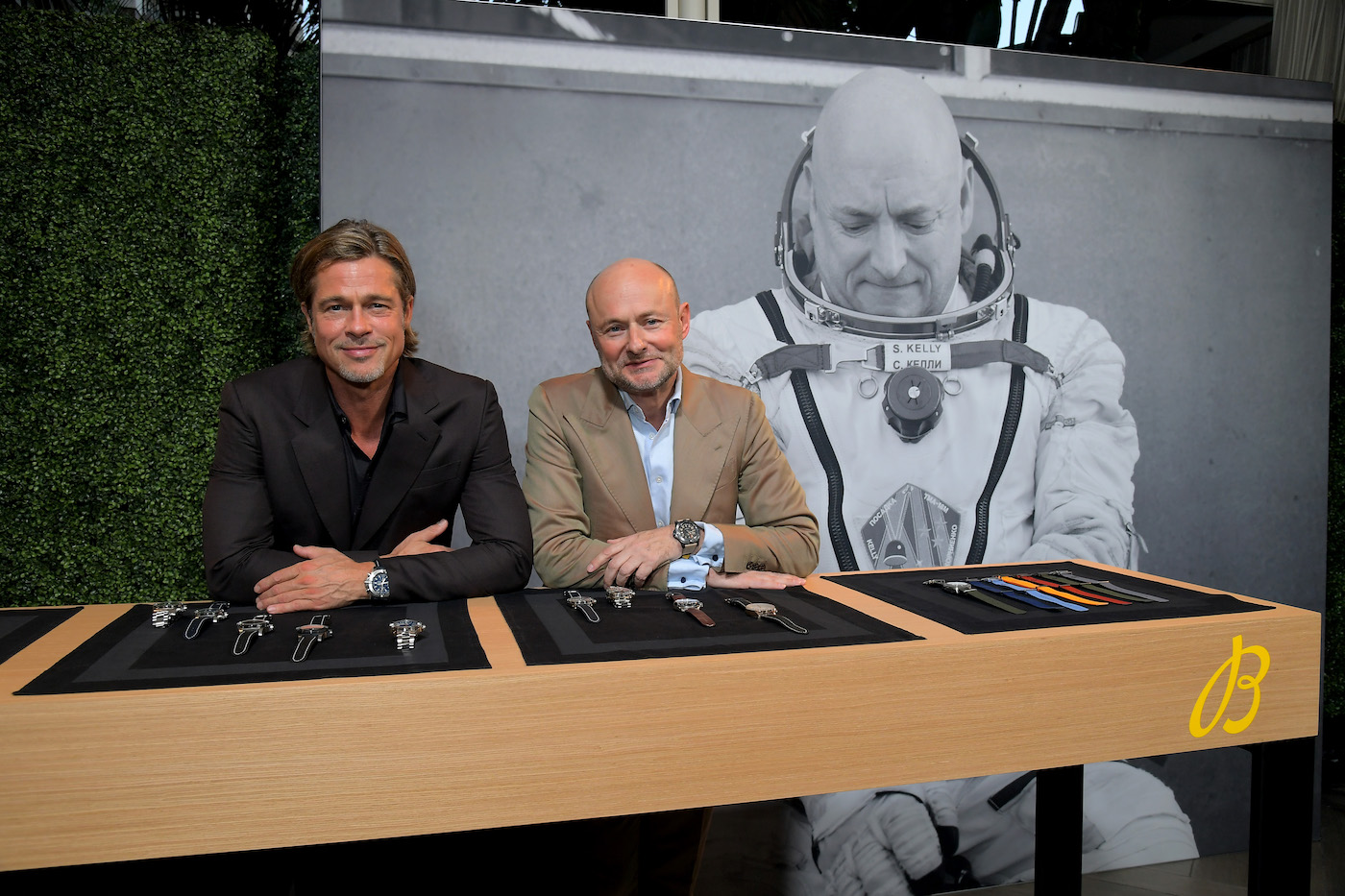 Aesthetic taste is personal, so what one man likes doesn’t necessarily have to appeal to another. Mature collectors know this, and Pitt seems to be among them. I asked him about advice he could give to novice watch collectors who might be intimidated when it comes to choosing what watches to acquire. The best advice he could give was wise, to encourage people to discover what they love, what makes them happy to wear and look at. Pitt, among all else, seems to be a tender sentimentalist. Ascribing memories and feelings to his watches, he wears them for as much their visual appeal as the emotions they evoke when he views them. Those emotions are personal, and to feel and discover them, you really need to go out there and feel and discover a lot of watches.

In my opinion, what makes Brad Pitt so universally loved as an actor (and I might be debated here by all the women at the event who seemed to mostly marvel at this handsome man’s external appearance) is his ability to be both rebellious and vulnerable at the same time. Brad does “charmingly break rules” better than anyone I know, and isn’t that what so many names in luxury wish to be? Breitling is lucky to have him, and watch-lovers are equally fortunate that a true watch guy will lend his personality to the brand.

What I hope next is that my comment to Mr. Kern about allowing Brad Pitt to design an entirely new Breitling watch (a notion which Pitt seemed to immediately entertain) will translate into reality. Now that would be fun. I didn’t get to say it to you then, Mr. Pitt, but thanks so very much for being a consistent and welcome character in pretty much all of our lives.