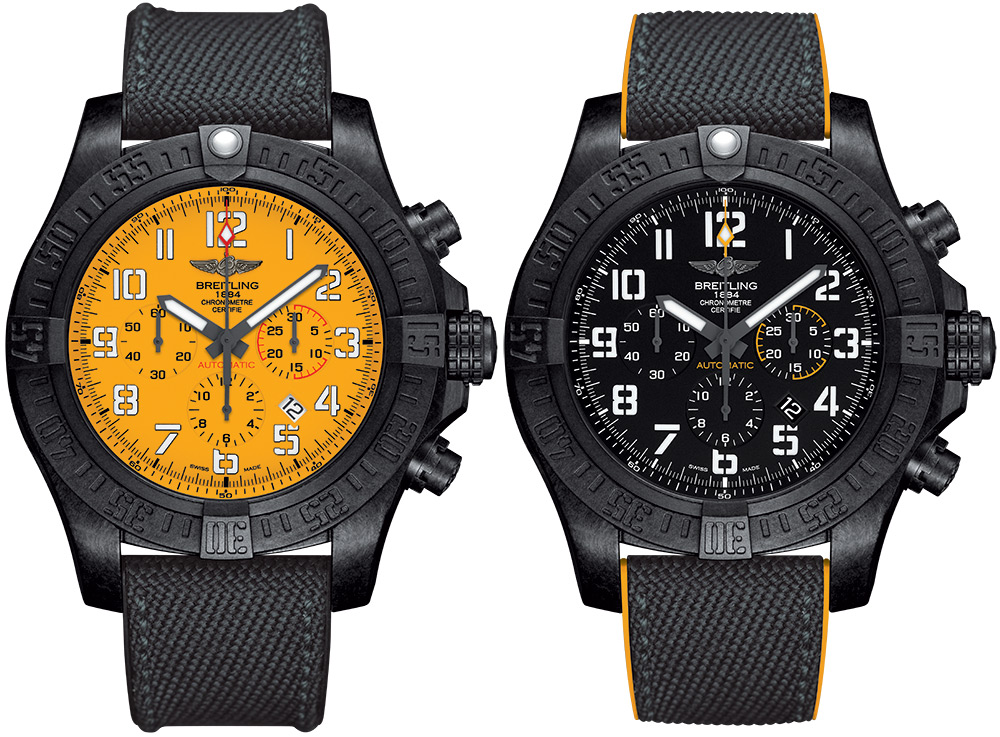 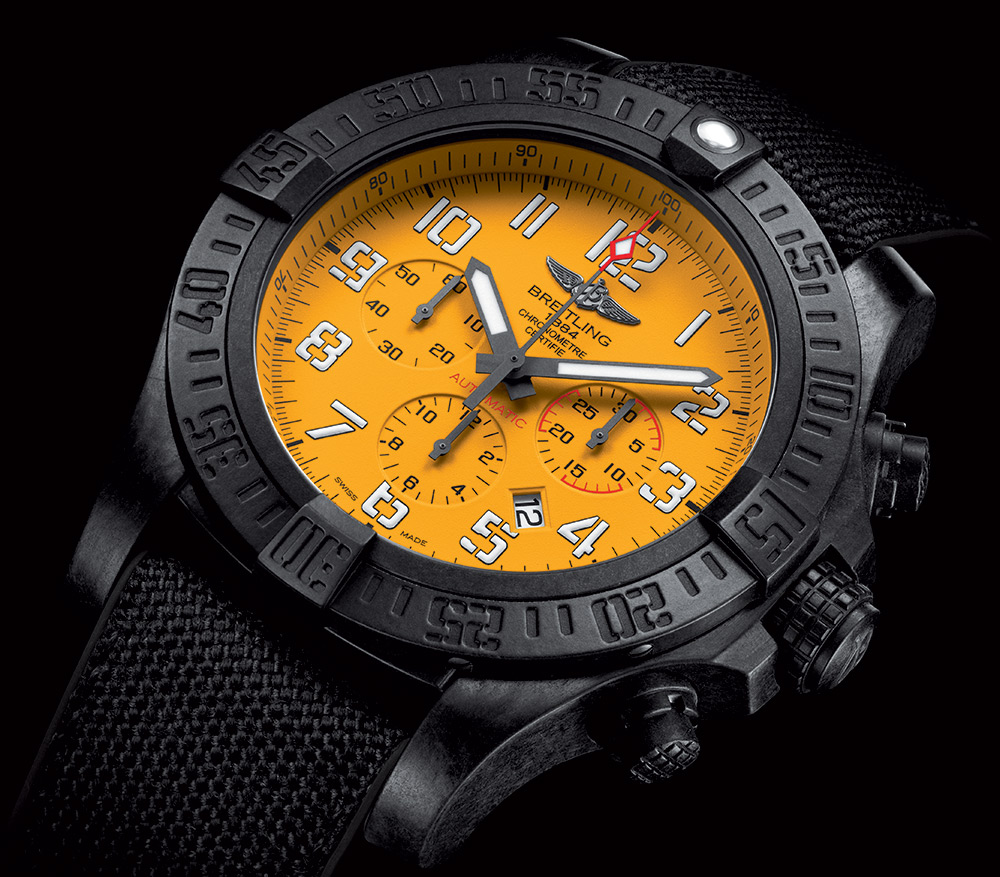 For Breitling‘s 2016 Baselworld showing, the brand debuted an all-new Avenger with a 24-hour movement set in a hulking 50mm “Breitlight” polymer case – which, as lightweight and “deceptively cool” as it was, deserved a smaller, more approachable treatment. Well, for those hoping that this year’s show would bring a wearable 44 or even 46mm variant, keep waiting – this is not your watch. The new-for-2017 Breitling Avenger Hurricane is still set in the same 50mm case as its predecessor but is now paired with Breitling’s in-house manufacture Caliber 01 – a 12-hour chronograph movement that’s become a proven hallmark for the still-independent Swiss watchmaker. 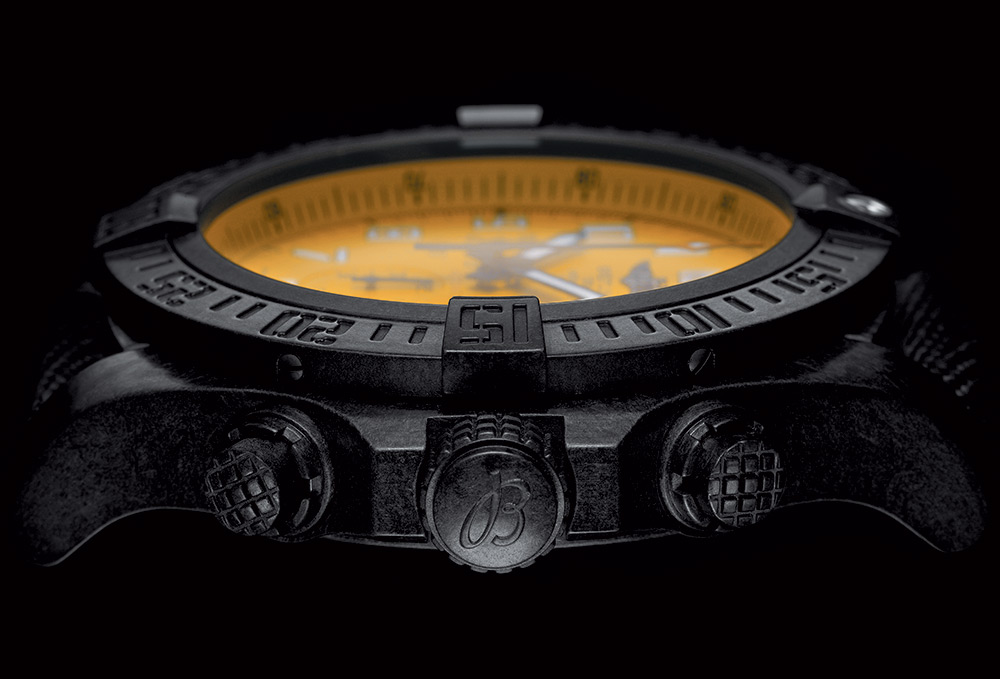 Before we get too far into the nitty-gritty inside the new Breitling Avenger Hurricane 12H Watch, we’ll come right out and say it: the “Breitlight” Hurricane could be Breitling’s hyper-macho “Dark Side of the Moon,” but at 50mm, its audience is massively limited right out of the starting gate. Certainly, the onus is on Breitling to showcase its proprietary new polymer technology in the best possible light – in this case, Breitlight, which impressively yields a feathery case weight despite its overall size. When serving as an illustration for the lightness of Breitlight, the Breitling Avenger Hurricane passes with flying colors. But as a groundbreaking new entry in the Avenger series with mass appeal, the Hurricane stumbles on the merits of its own proof point. Size complaints aside, the Breitling Avenger Hurricane 12-Hour is still a worthy entry in the “tacticool” Avenger series, and one that carries a slight advantage over its predecessor, in that it’s easier to read at a glance – particularly for those not accustomed to reading time in the 24-hour format. 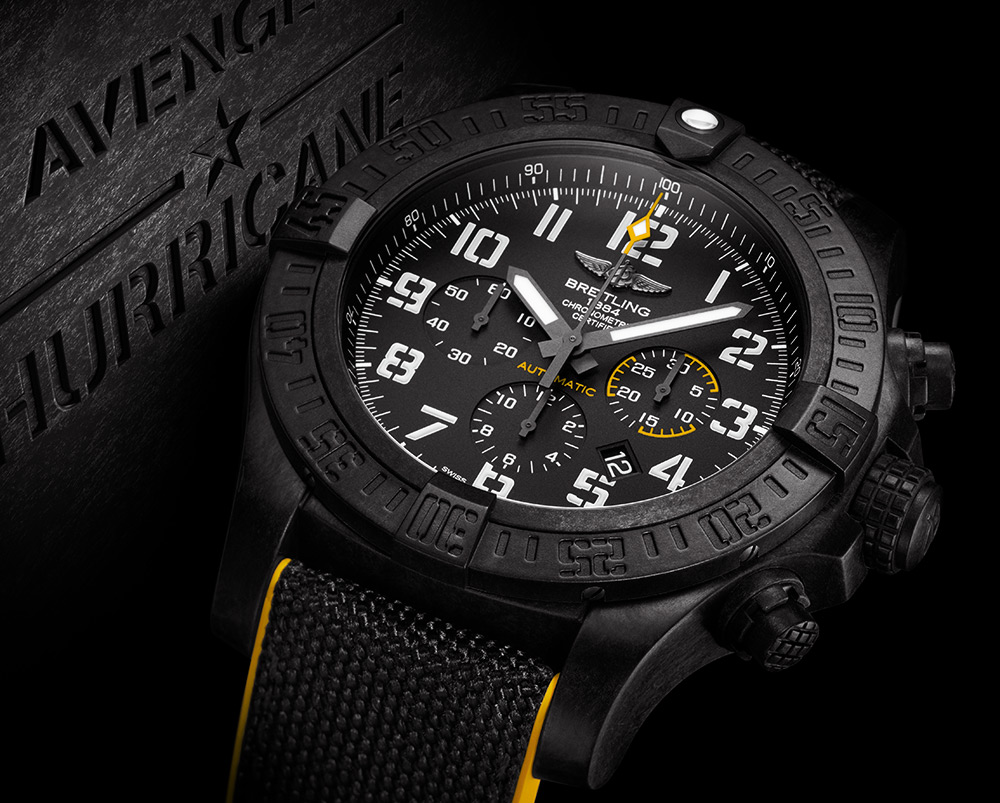 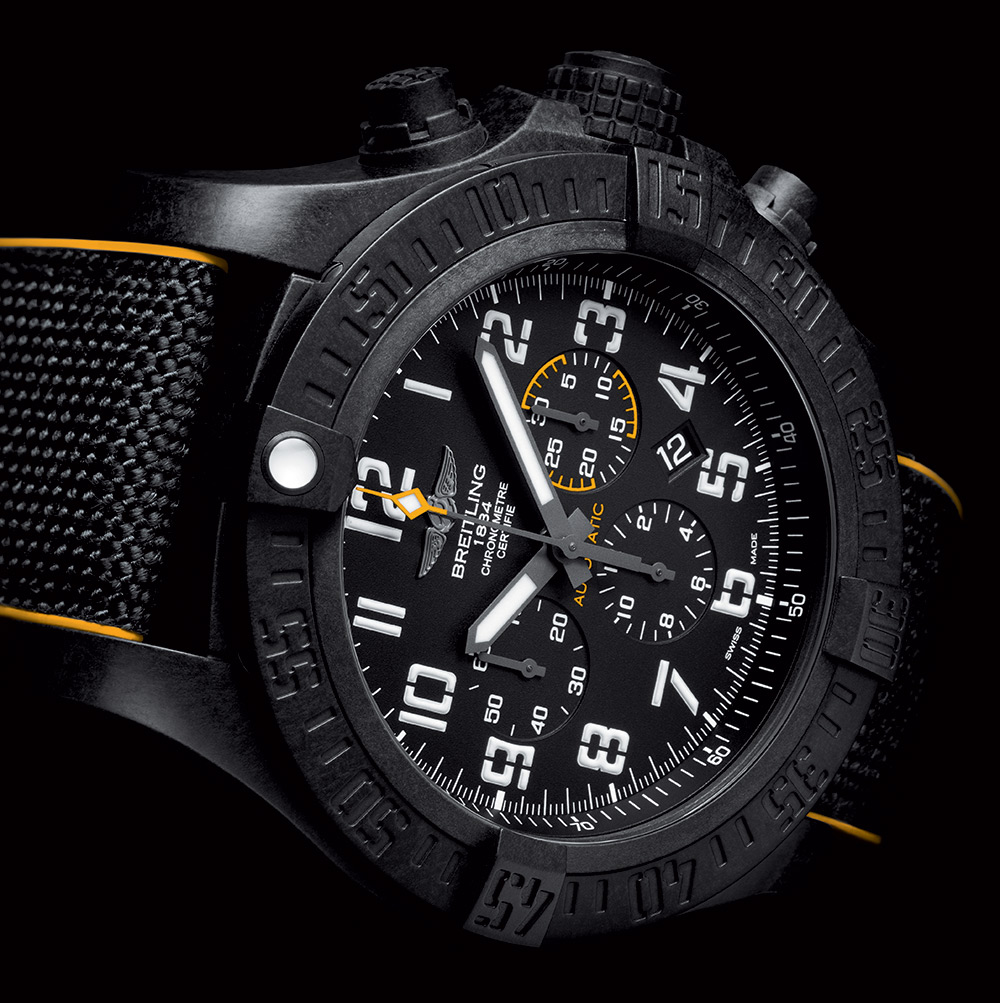 The COSC-certified Caliber 01 powering the Breitling Avenger Hurricane 12-Hour is Breitling’s first in-house manufactured caliber – a modular, 47-jeweled movement introduced in 2006 after a five-year development period. Usually reserved for Breitling’s limited, or top-shelf Chronomat and Navitimer offerings, the B01 is a column-wheel chronograph equipped with a vertical clutch, yielding crisp pusher engagement and buttery-smooth actuation on the center-mounted chronograph seconds counter. The automatic movement hums along at a pretty standard 4Hz, but carries a generous 70-hour power reserve from a single barrel. 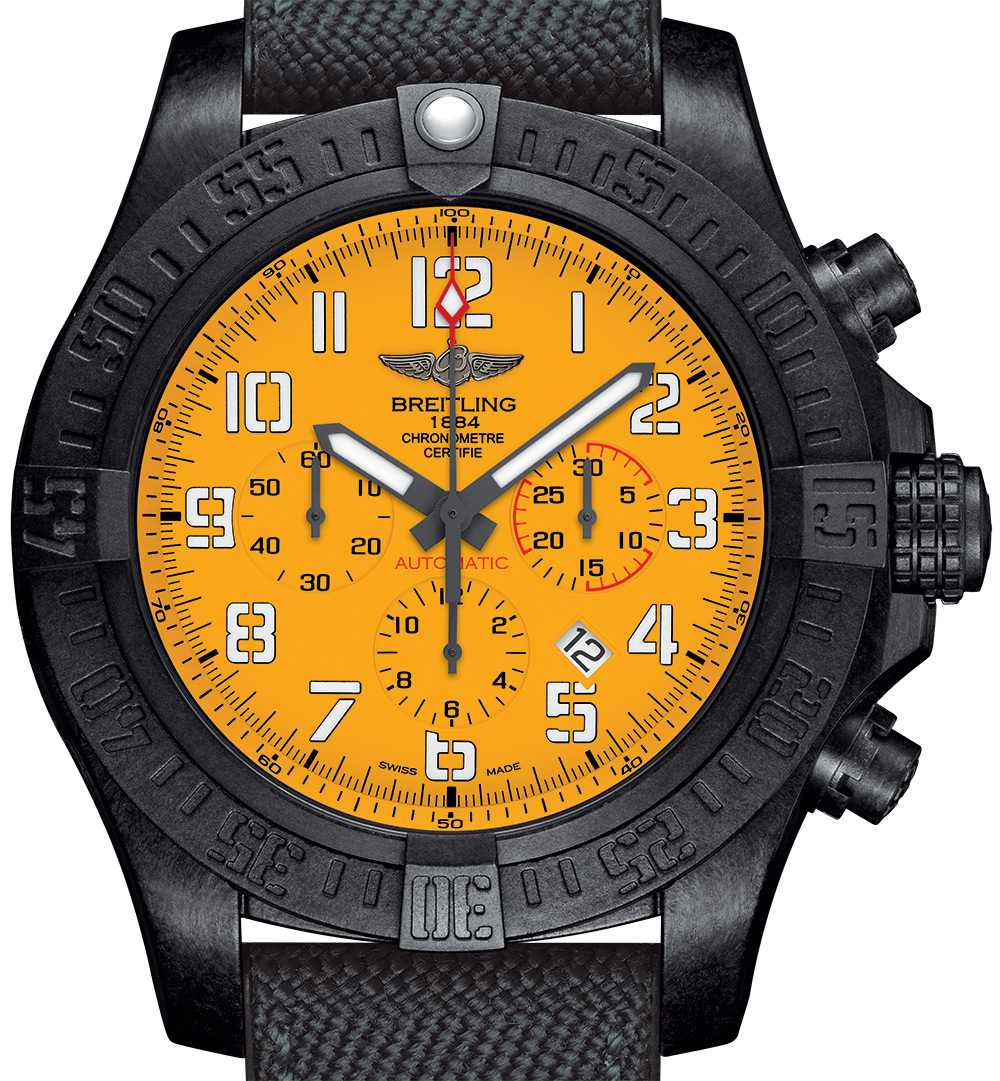 Despite the size of the case and what goes inside it, the real story here remains its proprietary Breitlight polymer construction, now on its second tour of duty within the Breitling Avenger collection. This proprietary polymer is three times lighter than titanium, nearly six times lighter than steel, and significantly harder and more scratch-resistant than both. Of course, it’s also anti-magnetic, shielding the movement within from any harmful magnetic fields its wearer might encounter in the modern cockpit. 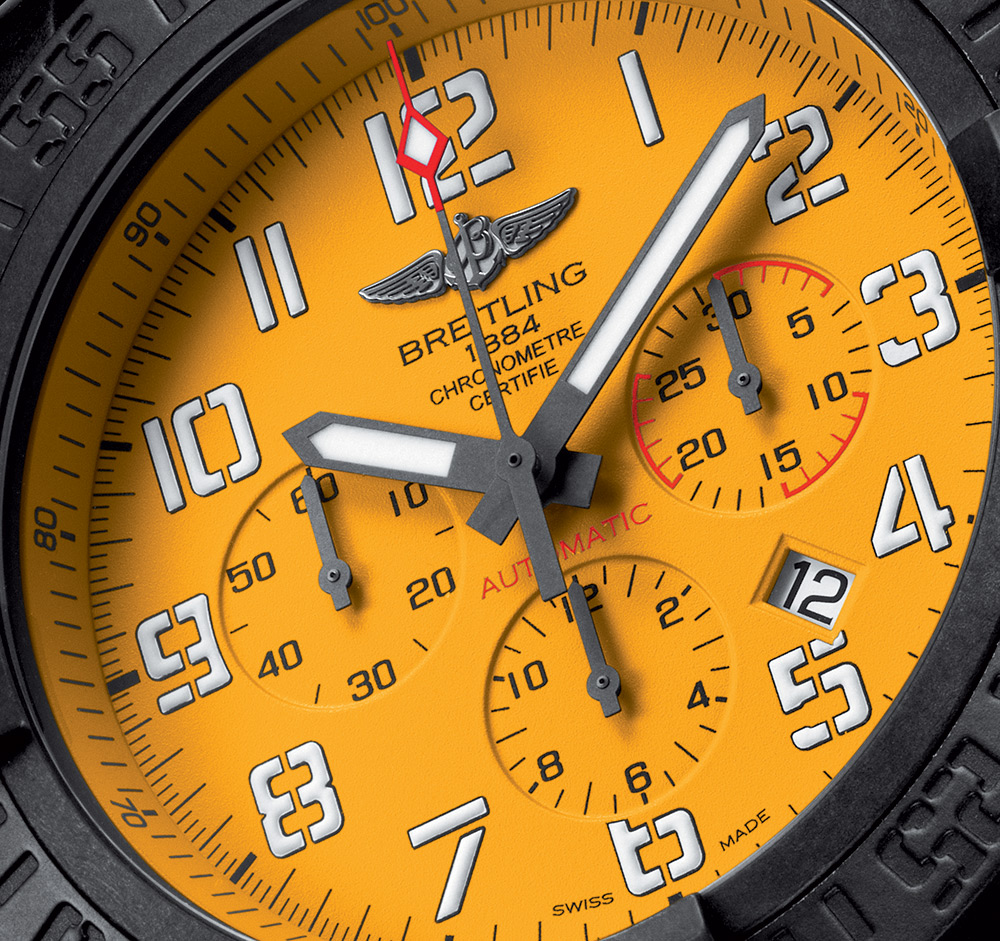 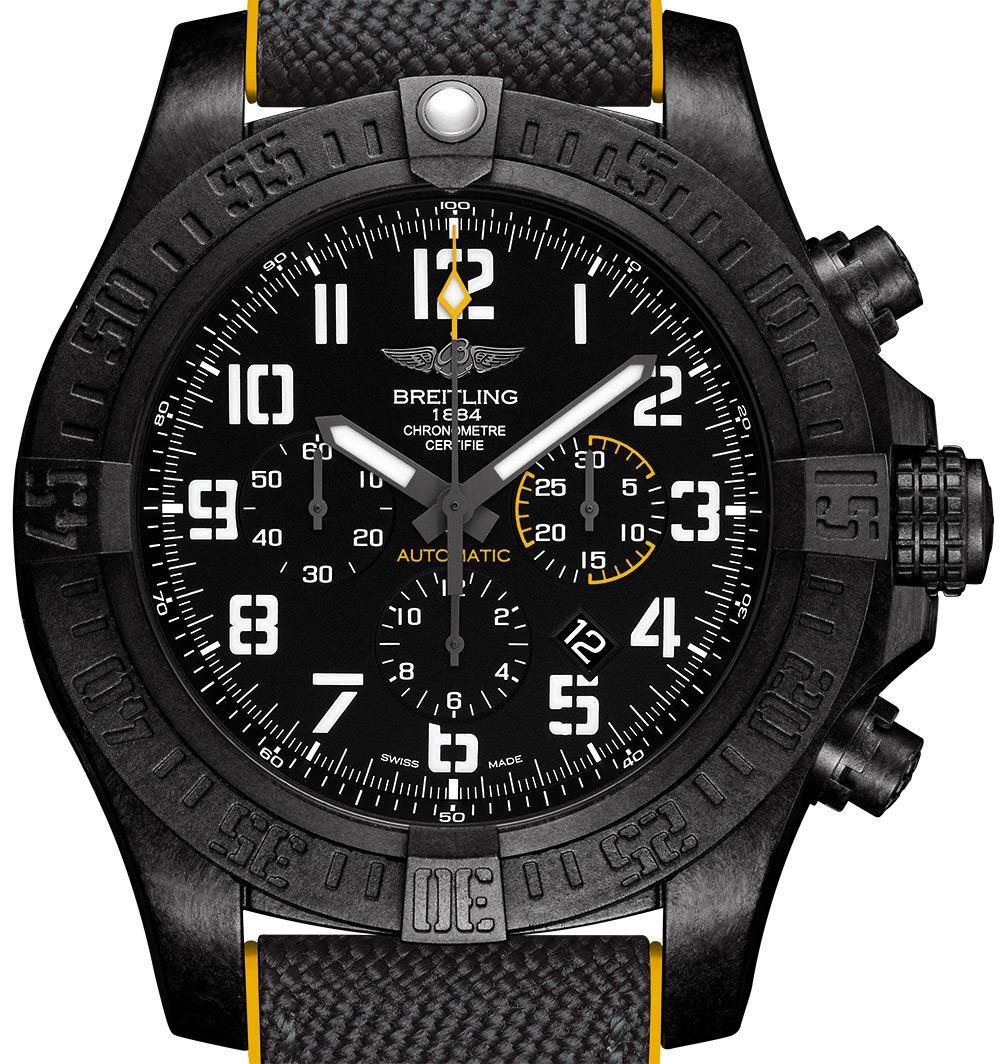 Whether Breitling has a more reasonably sized Hurricane still tucked into its sleeve for a later release, the Hurricane in its current form is still unapologetically cool with its ultra-masculine aesthetic, military-inspired stenciled numerals, and subtly textured Breitlight case. Available now in both black, and a new yellow dial, the price for the B01-equipped Breitling Avenger Hurricane 12H is $8,390. breitling.com