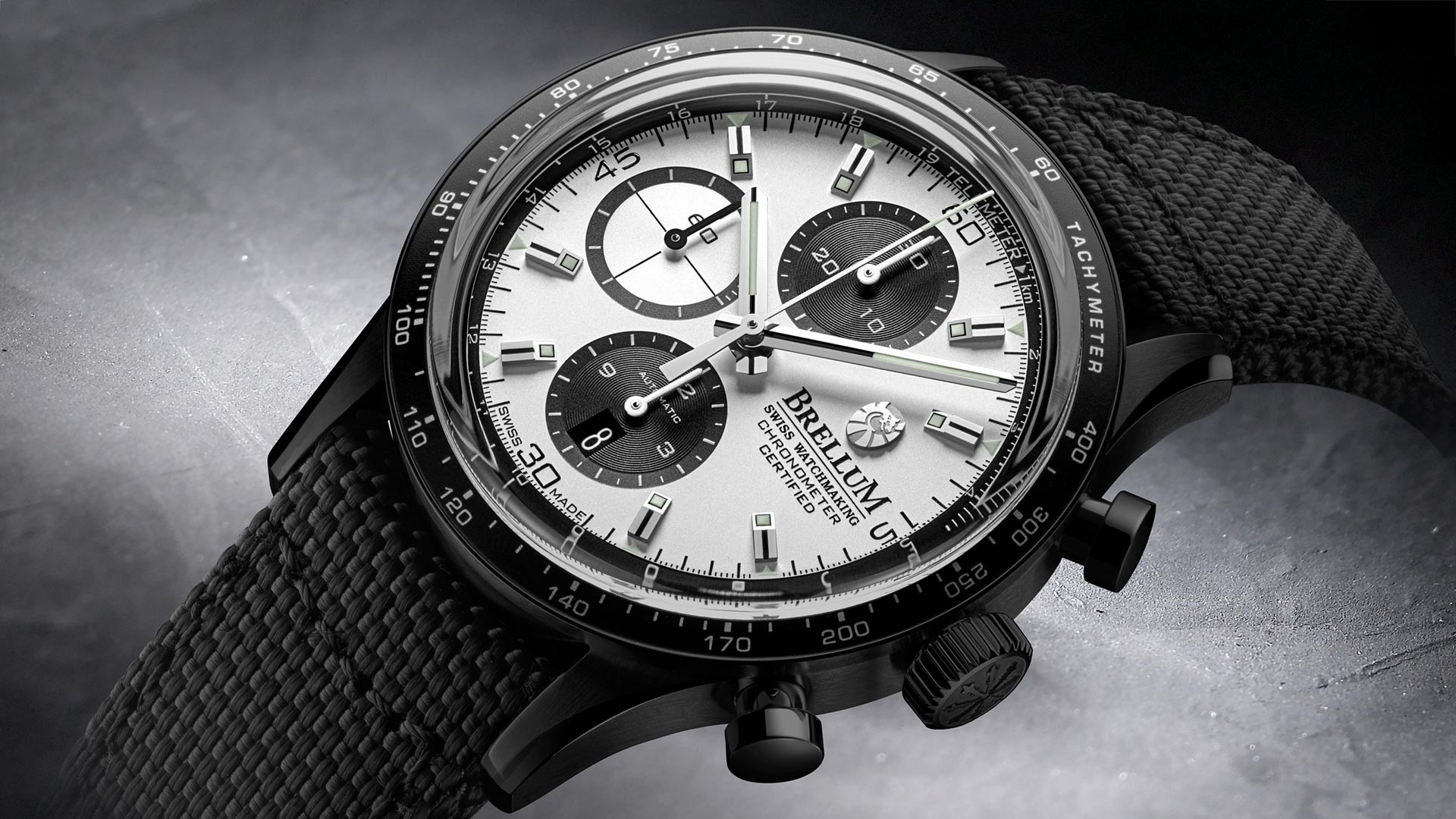 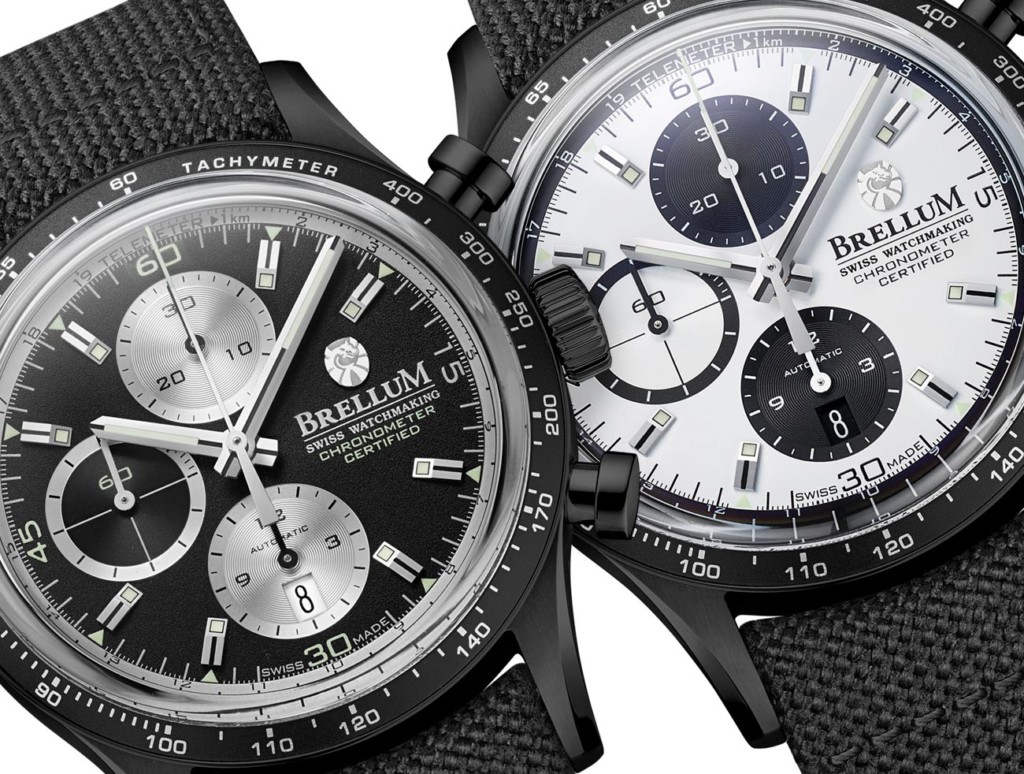 New-independent-on-the-block Brellum brings the first DLC-coated chronograph model to its catalog – the Brellum Pandial DLC Chronometer. Brellum and specifically the Pandial collection has historically provided a fantastic value considering its relative affordability for a COSC-certified chronograph and the Pandial DLC Chronometer fills that “tactical” gap in the collection with a very masculine design.

I’ve always found Brellum to be a watch brand by an enthusiast for enthusiasts. The founder claims to be a 4th-generation watchmaker with decades of watchmaking under his belt who finally decided, at 42 years old, that he was going to start Brellum with the goal of producing “products with timeless and durable lines, manufactured using high quality materials with reliable automatic mechanical movements, fully adorned and officially certified by the COSC.” I’ve been a fan since they first released the Brellum Duobox that we saw hands-on here, as I’ve found them to be a good value – and that’s refreshing to find among so many young watch brands trying to make it in the industry. 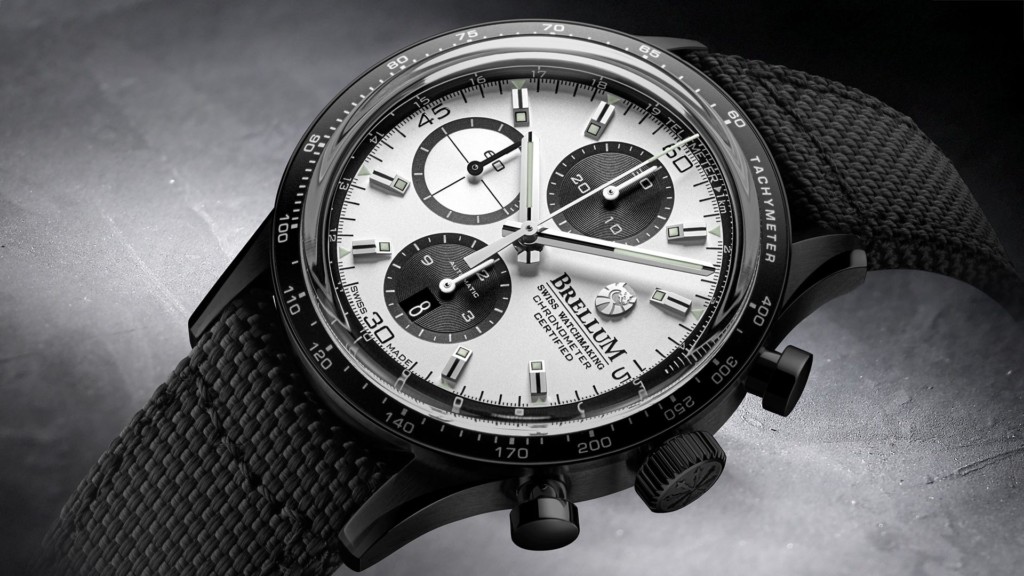 With that being said, let’s get into the watch itself. The stainless steel case measures in at 43mm x 15.9mm – making this watch a thick boy, especially with the pushers and integrated tachymeter. Now, that more or less comes with the territory when talking about many 7750 based watches, but it is important to mention because I feel the press images make this watch look rather thin. The watch features two “box-shape” sapphire crystals – meaning they’re raised and rounded at the edges, and it does add 4mm of thickness to the watch. The entire case is black DLC-coated and really brings a nice masculine element to the watch. I feel, in the press images anyway, that the DLC coating really drew my attention to the semi-twisted lugs, a nice feature I never really noticed before. The watch carries a water resistance rating of 50m. 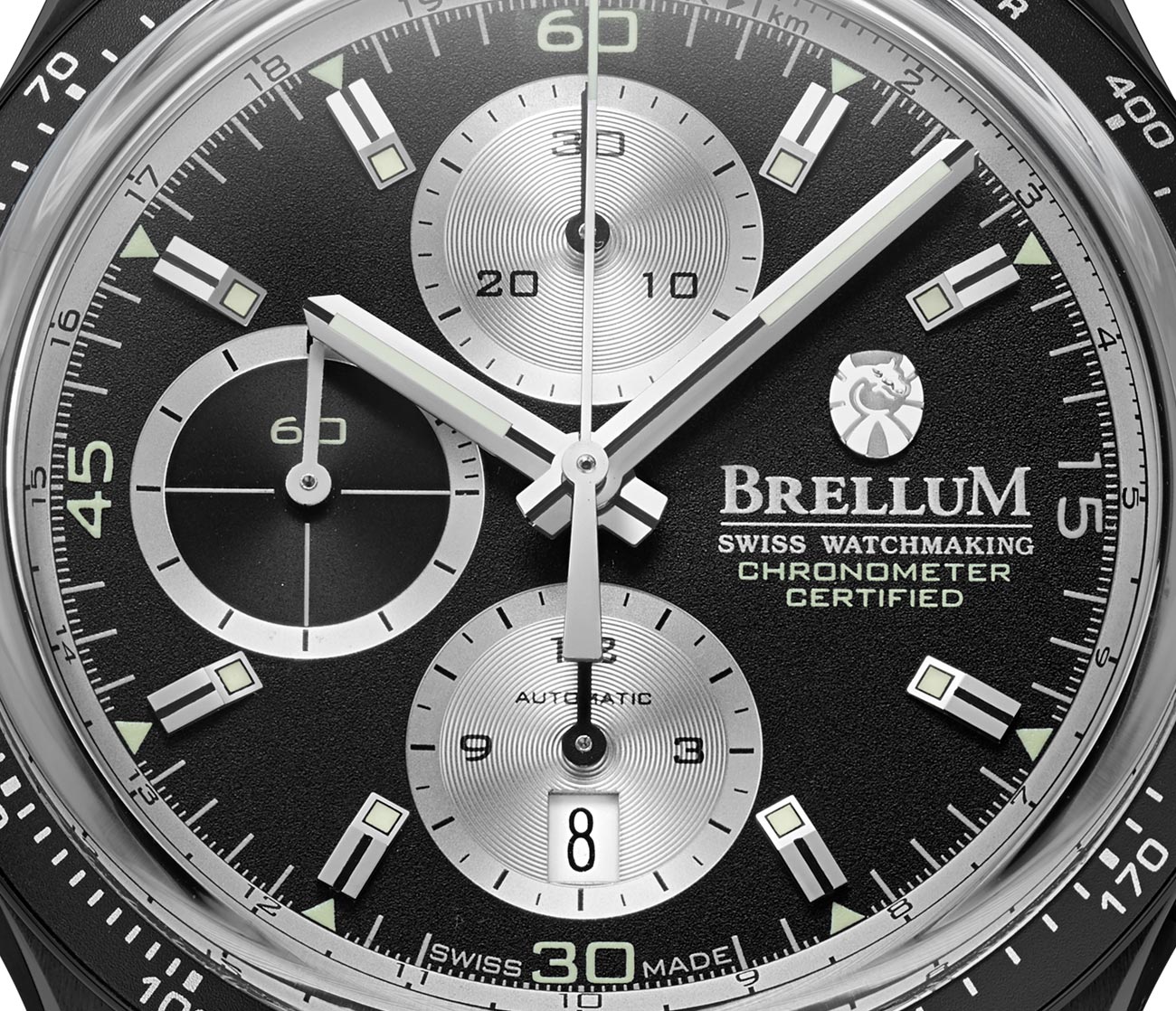 The dial features the standard 7750 6, 9, 12 o’clock subdial layout with alternating colors. The dial comes in black or “silver-white.” I have to admit, when I first got the press release, I did a double take because I thought they called it the “pandadial” watch, and I would have been 100% on board with that. The most prominent feature of this watch is its contrasting monochromatic color scheme being panda-esque. The hands and indicators are legible enough. The integrated date window is in the 6 o’ clock subdial and features a matching date disc – a welcome inclusion. I’ve seen a couple of complaints that Brellum’s logo and subsequent text is too much, and I tend to agree here. I think the exclusion of “Swiss Watchmaking” under BRELLUM would make the 3 o’clock position less cluttered, especially since “Swiss Made” is at the bottom of the dial, though I totally support “Chronometer Certified” being prominently displayed here. 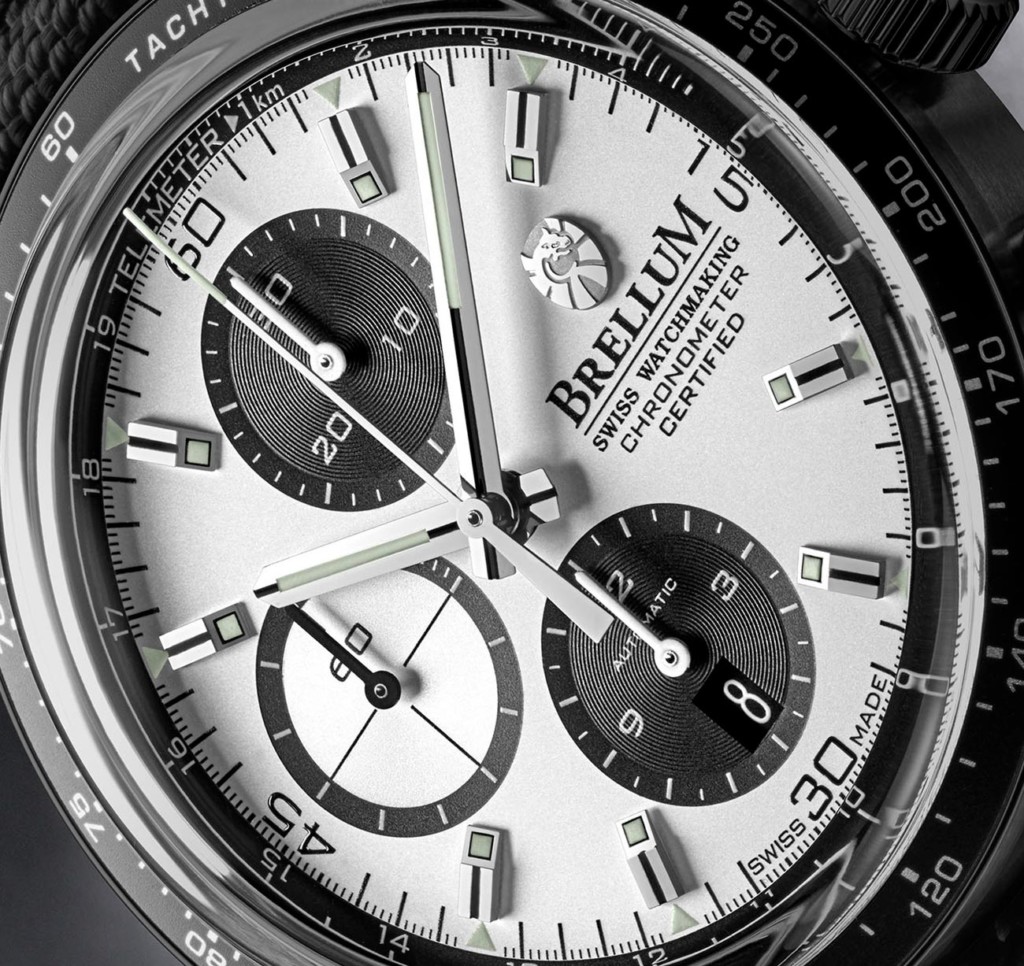 A major draw to this timepiece, and really Brellum in general, is the fact that you can get a COSC-certified movement in an attractive chronograph for a reasonable price. Are there cheaper COSC models out there? Yes. Do they carry the same overall design as Brellum? Not that I’ve found. Inside the Brellum Pandial Black DLC Chronometer is the Brellum BR-750-1 – a decorated and modified Valjoux 7750-based automatic chronograph movement. While we don’t have pictures of the movement yet (we will post them when we received them), the marketing material states it has perlage, blued screws, Geneva striping, 25 jewels, and a custom Brellum rotor – and if it looks anything like previous Brellum movements, it’ll be beautiful. As is typically the case with this movement, it beats at 28,800 vph (4Hz) and has a power reserve of around 46 hours. 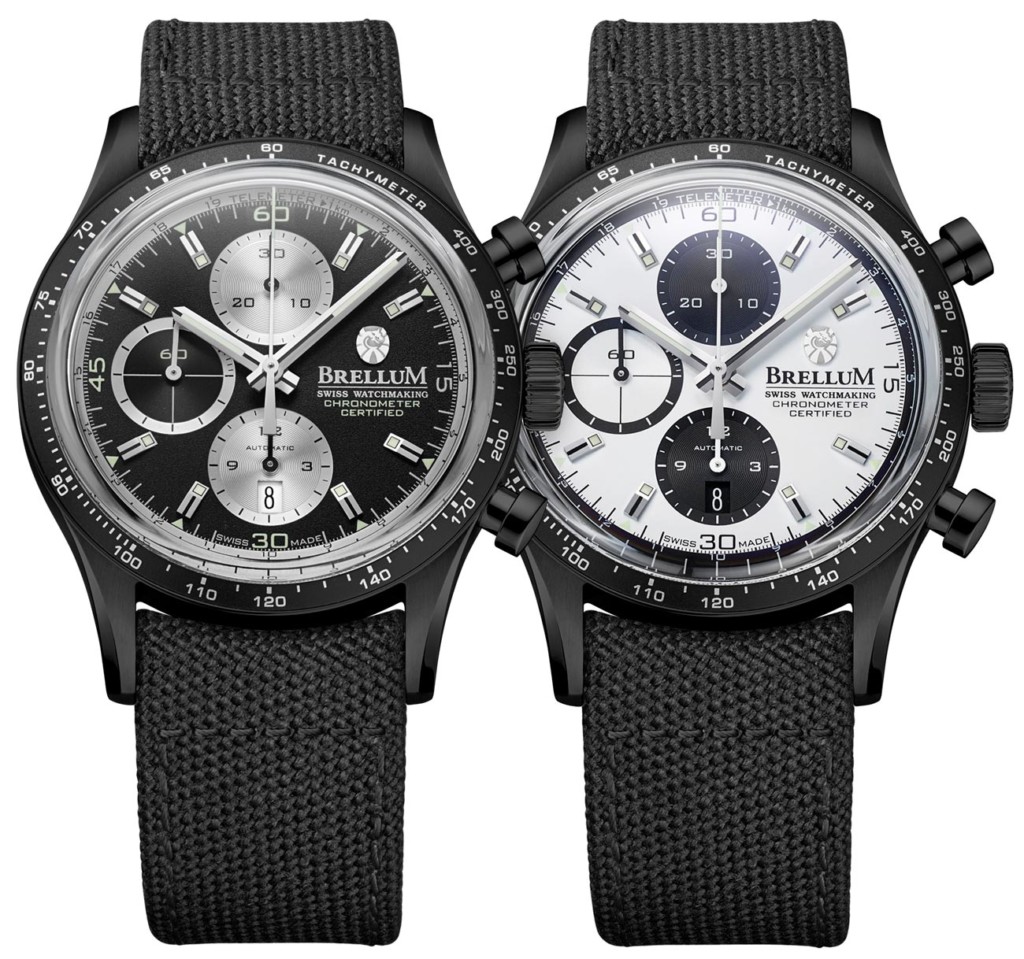 Tying the watch together is a black Nebur Tec strap. This is a durable canvas-like material that looks sporty. There are a number of models in Brellum’s catalog that carry this strap, but this is the first model I have genuinely been excited about. It simply fits the watch well and adds to the rugged nature of the aesthetic. According to the website, it will also include a rubber strap, though I couldn’t find any pictures of it.

Overall, this is a solid offering from Brellum. While yes, this is a relatively minute refresh with a fresh coat of DLC, the watch feels uniform and masculine, and that makes it attractive. At less than 3 years old, the young brand has always been a great value proposition, whether a COSC certification is a “must have” or an added bonus. Now there is another option for an enthusiast with a penchant for a DLC coated “tactical” look from a solid, but agile independent brand that won’t cost as much as some of the bigger players with similar specs – and there’s plenty of room for that in the industry. Price for the Brellum Pandial Black DLC Chronometer is 2,405 CHF. Learn more at brellum.swiss.