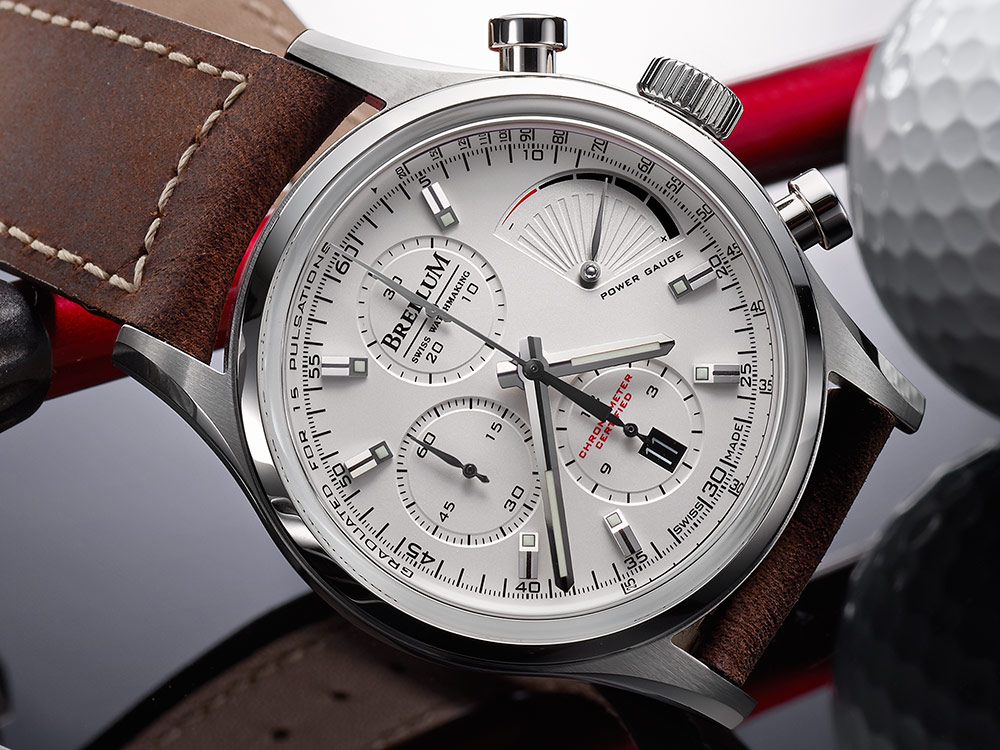 Brellum, an independent Swiss watch brand launched only in December 2016, has already begun adding to their debut Duobox collection with two new models. They are a two-tone steel and rose gold version of their original Duobox chronograph and, the subject of this article, the Brellum Duobox Classic Power Reserve LE.1. As the name suggests, it is a chronograph with a power reserve indicator, and it is made in an extremely limited run of only 8 watches. The “Duobox” in the name refers to the use of two “box-shaped” sapphire crystals on the front and back.

Founded by Sebastian Muller, a 4th-generation Swiss watchmaker with over 25 years of industry experience, Brellum debuted with the Duobox Classic chronograph watches. Some of the hallmarks of the brand include COSC-certification for every production watch along with the guarantee that each unit is assembled by the founder himself. 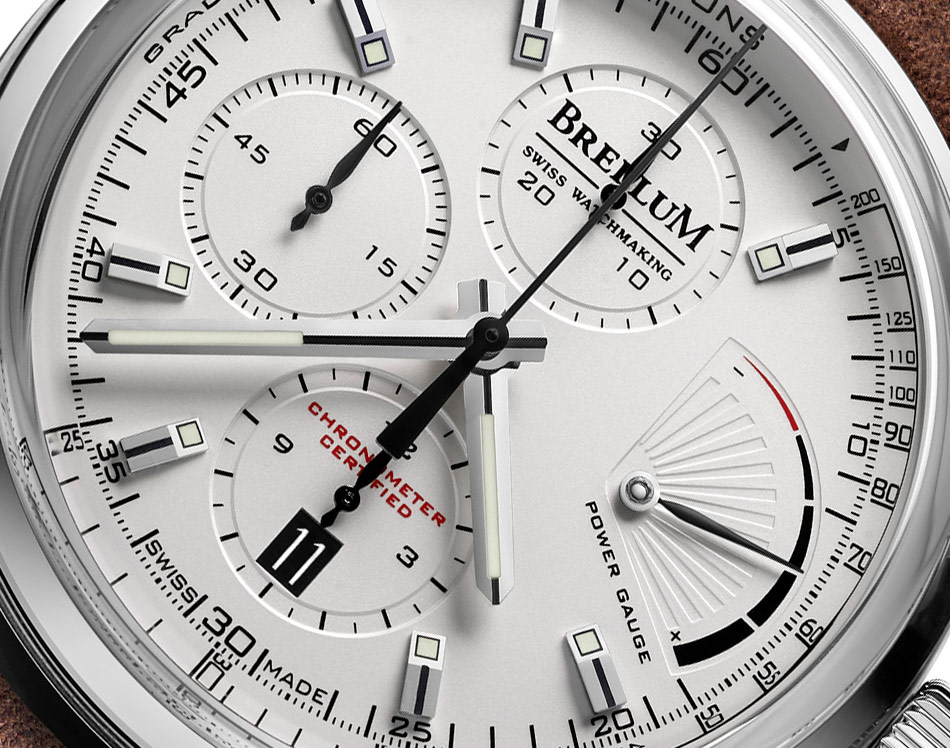 The base for the Duobox Power Reserve is the ubiquitous Valjoux 7750, a time-tested automatic chronograph movement which Muller has modified to add power reserve indicator functionality. Particularly appreciated in manual-wind watches, a power reserve display serves as a reminder to wind the watch as the mainspring winds down but is less important for an automatic watch – provided it is worn regularly by a reasonably active person, of course.

The movement offers 46 hours of power reserve and is also well-decorated with plenty of Geneva stripes, perlage, heat-blued screws, and a rotor that is black PVD-coated and engraved with the number of the watch. All of this is visible through a box sapphire crystal on the back which represents one half of the “Duobox” name. 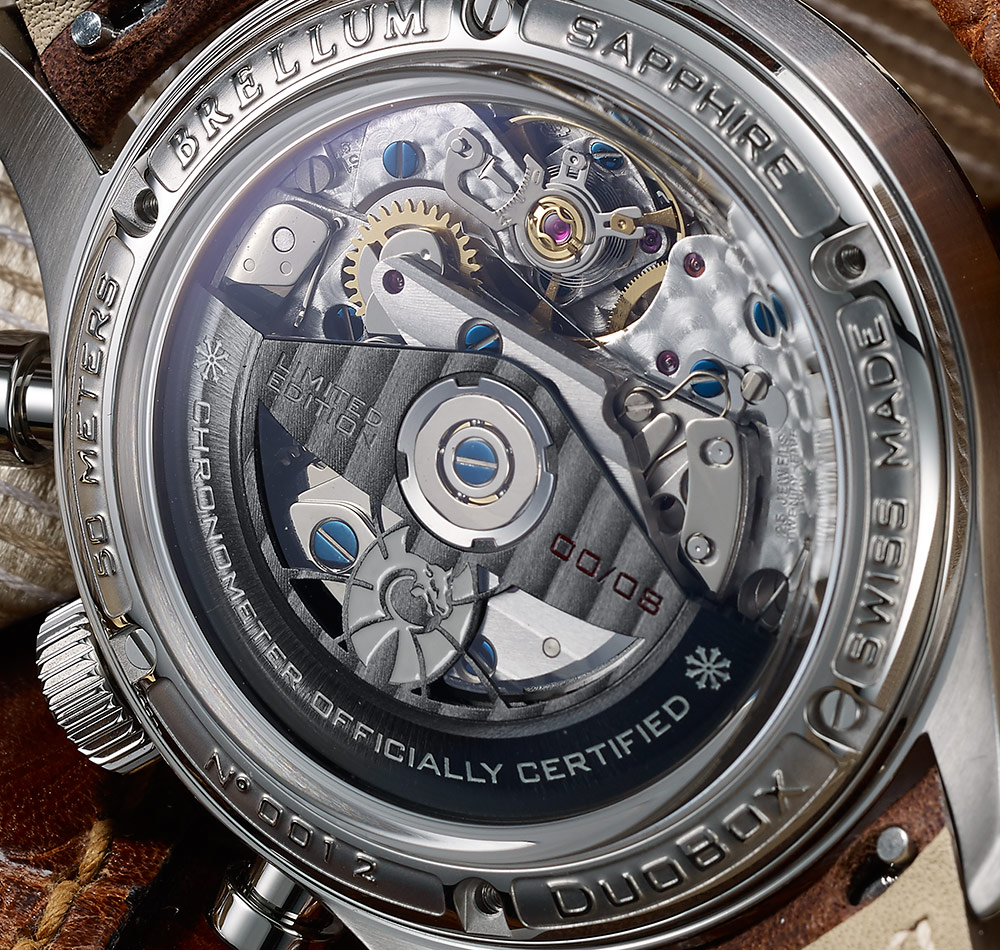 One of the primary drawbacks to the Valjoux 7750 is the sheer thickness of the movement, which is apparent in the dimensions of most watch cases that house it. And it doesn’t help that the power reserve indicator probably adds an additional millimeter or two of thickness. The Brellum Duobox Power Reserve LE.1 checks in at a rather thick 16.2mm and 42mm in width. Muller has attempted to hide a lot of this with clever design, such as the polished, angled bezel on the front and, most of all, the use of box sapphire crystals which help reduce the thickness of the actual case as well as the watch’s visual thickness.

The raised crystals, which are often called “box-shaped,” are mostly associated with acrylic crystals from before the era when sapphire was commonly used on watches. So, while more difficult to produce in sapphire than a domed or flat watch crystal, it has an old-school vibe to it that many people find attractive. You get that neat shape that adds an extra three-dimensional element to the watch face, but with all the scratch-proof durability of sapphire. The overall design of the steel case (water-resistant to 50m), however, is contemporary and familiar, completed with round pushers and a fluted crown. 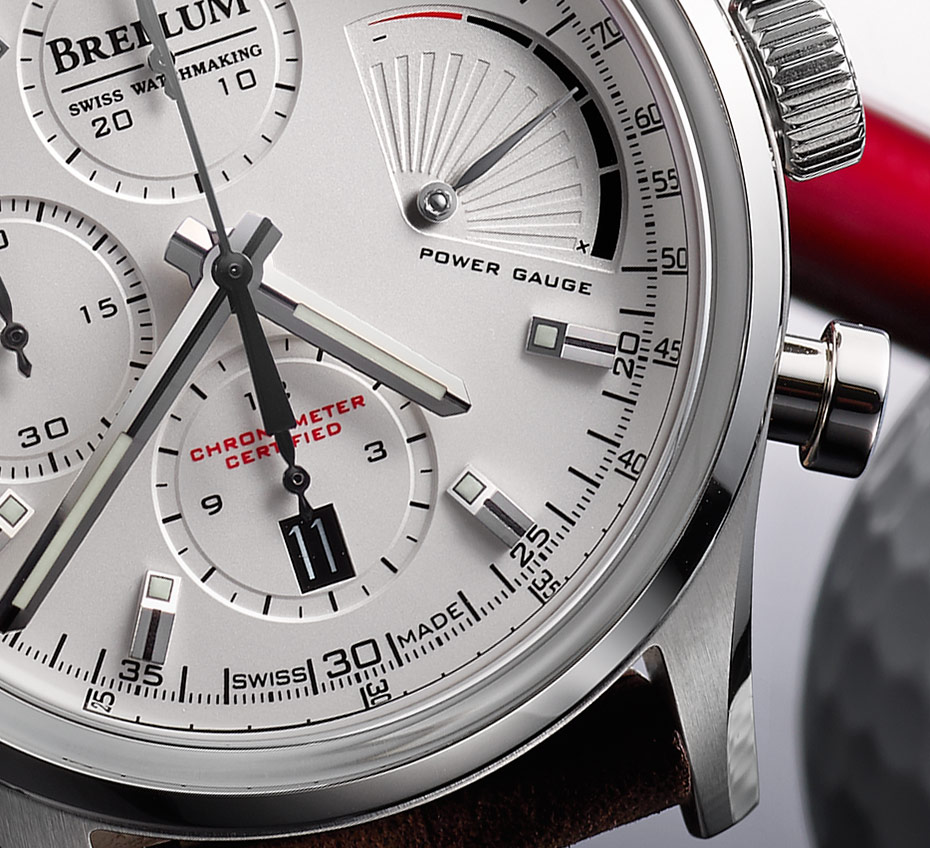 Even at first glance, the dial suggests the 7750 movement thanks to the sub-dials at 3, 6, and 9 o’clock. I’ve always felt that the 7750-based chronographs look visually unbalanced because of this arrangement, and Brellum has addressed that by placing the power reserve indicator at 3 o’clock. While this indicator restores some visual balance to the dial, it did get in the way of a 2 o’clock hour marker that would have really helped the symmetry. The multiple sub-dials, date window at 6 o’clock, a pulsometer scale around the edge, and ample amounts of text may make the dial feel a little cluttered to some people.

All the current Brellum watches are chronographs, and all include a pulsometer scale rather than the far more common tachymeter. This can be used to measure someone’s pulse, and chronographs that feature it are often marketed as watches designed specifically for medical professionals. While Brellum’s materials do not note the specific reason for its use, we can just be satisfied that it is easily a more practical feature than the tachymeter – that, frankly, no one today actually uses to measure speed. Aesthetically, it probably serves the same purpose as a tachymeter, providing a technical and “instrument-y” look. 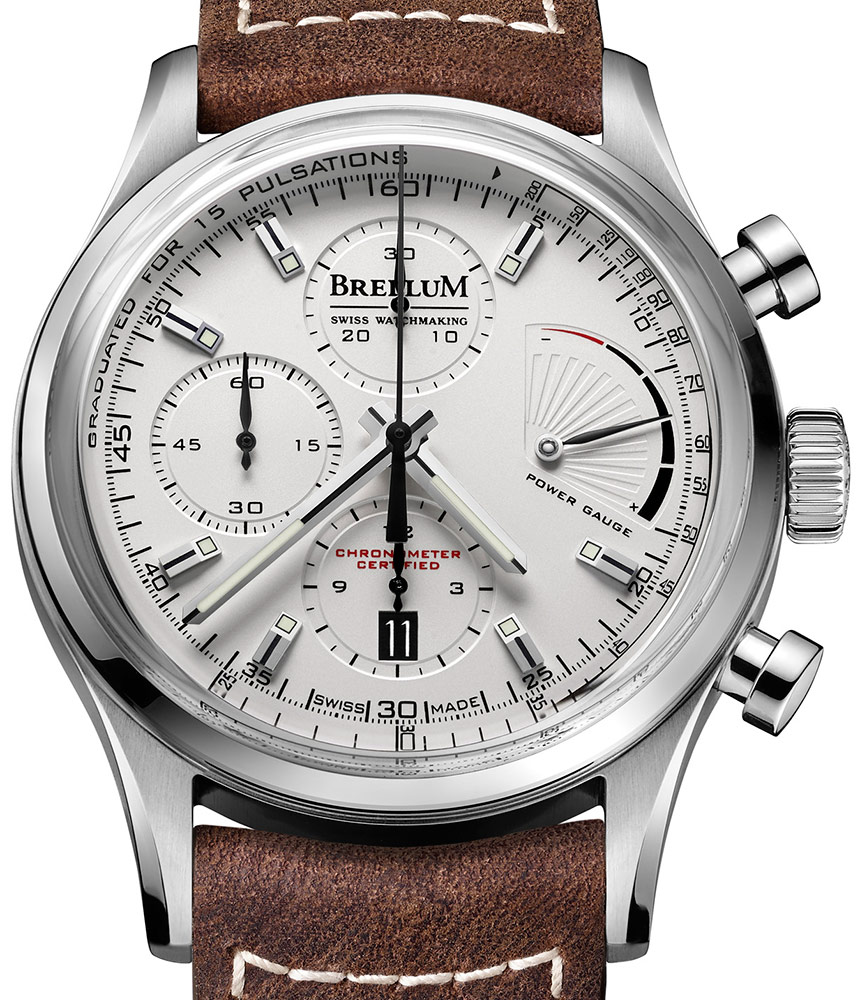 There is a lot of value offered for the price with the Brellum Duobox Classic Power Reserve LE.1 when you consider that you get a reliable, modified, significantly decorated, and COSC-certified movement with a watch that is assembled by one watchmaker and produced in a limited run of 8 watches. The Brellum Duobox Classic Power Reserve LE.1 on a brown leather strap is priced at CHF 2,675. brellum.swiss