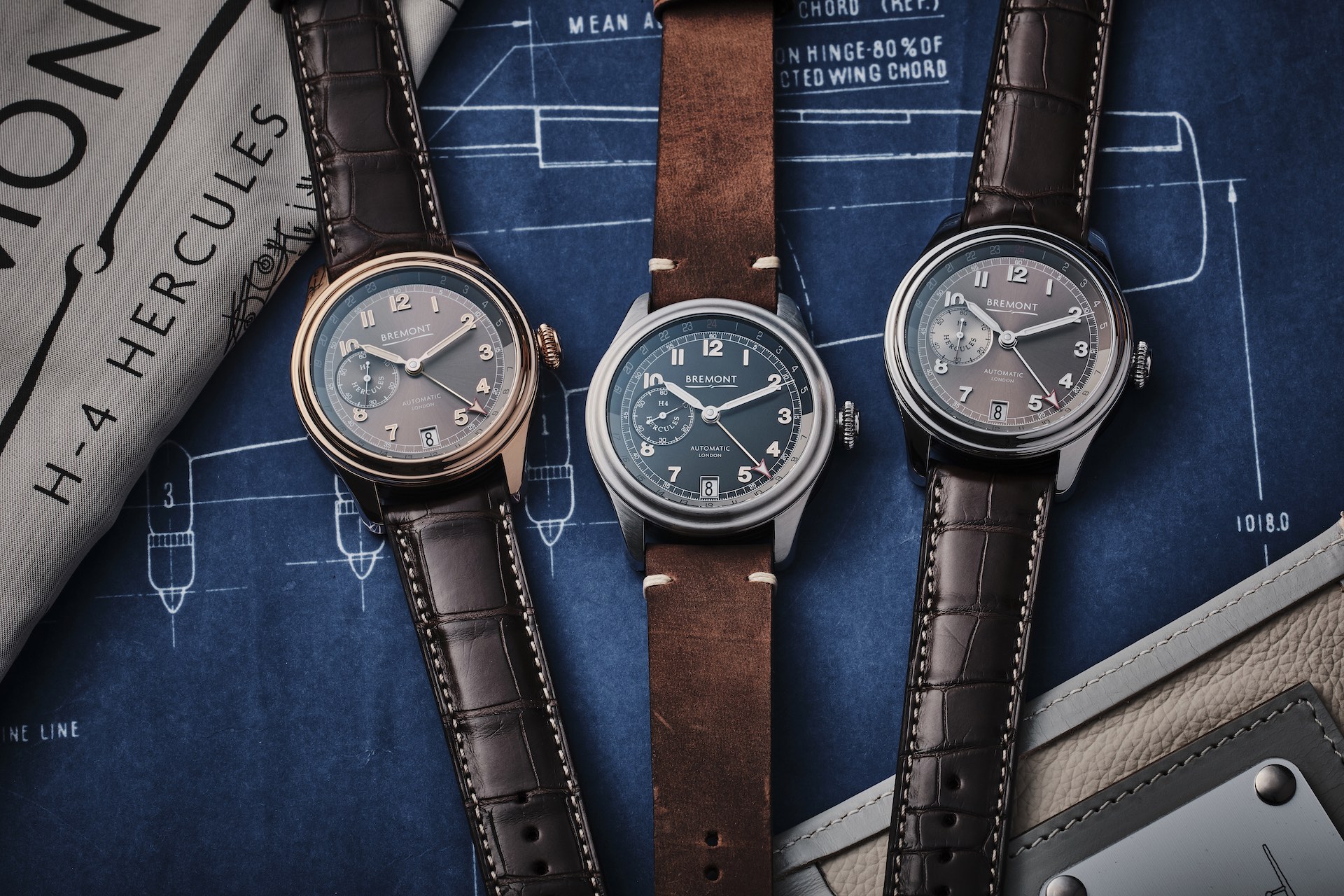 Just announced is the new Bremont H-4 Hercules Limited Edition watch that both celebrates and actually incorporates the famously massive wooden “Spruce Goose” airplane designed by Howard Hughes in the 1940s. With a total run of 450 pieces of this new GMT from Bremont, there will be 300 in stainless steel, 75 in rose gold, and 75 in platinum. 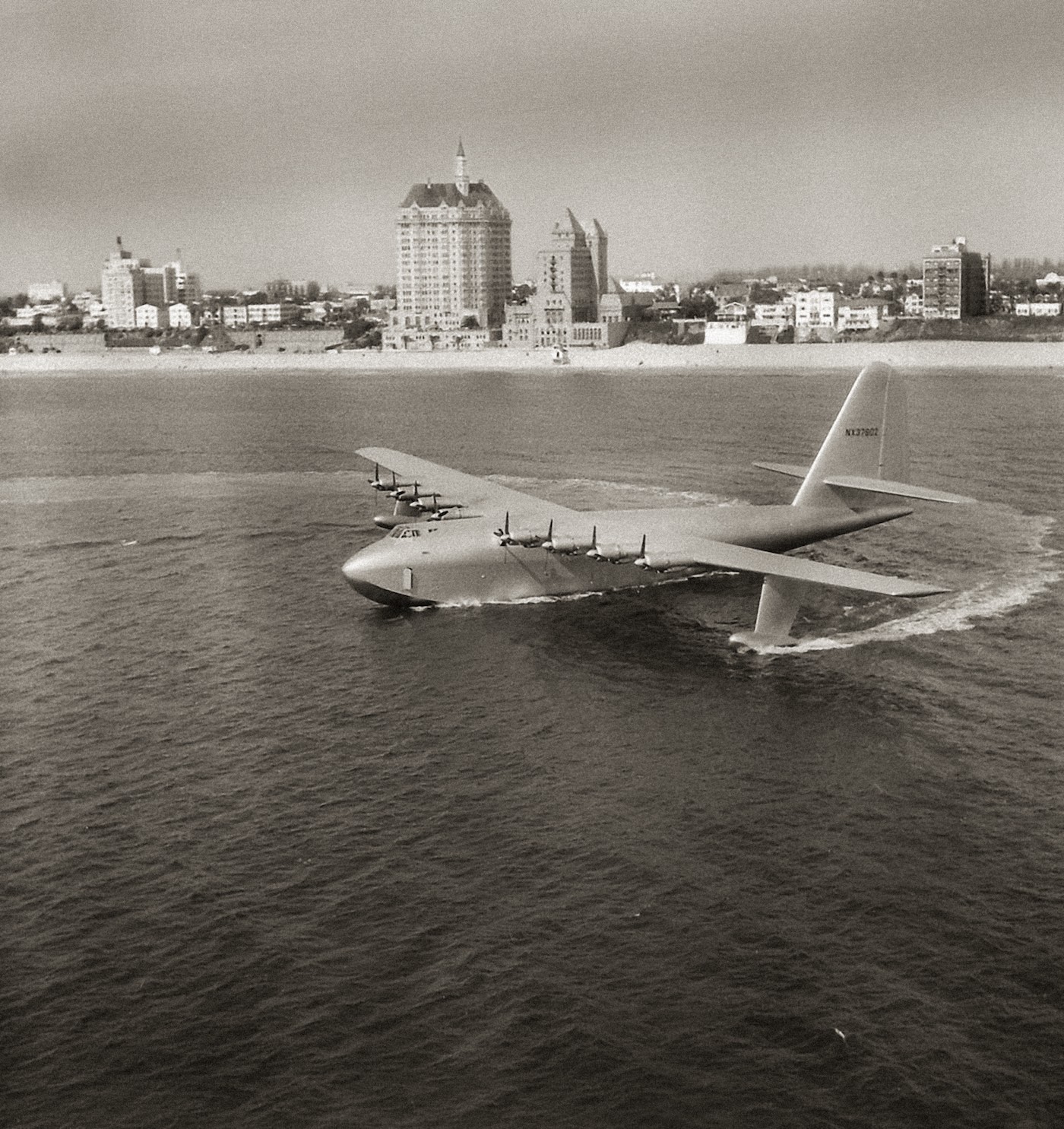 The story of the Spruce Goose is pretty engrained in American aviation lore, at this point. The eccentric Hollywood studio owner who also owned the Hughes Aircraft Company sought to build a transport cargo plane that could avoid U-Boat torpedos during World War 2. Given supply shortages, the ship had to be built from wood rather than metal. Ironically, though the nickname was “Spruce Goose,” the plane was actually built from birch. Long story short, Hughes succeeded in building what was then the world’s largest plane, with a 320-foot wingspan. The only problem was that the Allies had already turned the tide of the war by the time the plane was ready. Eventually, the Spruce Goose did take flight (in 1947) for a full 26 seconds, proving that the plane could, indeed, fly. That was the first and last time it would.

Of course, the Spruce Goose is seen as a monument to ingenuity, grit, and ambition rather than the plane that changed the course of the war. 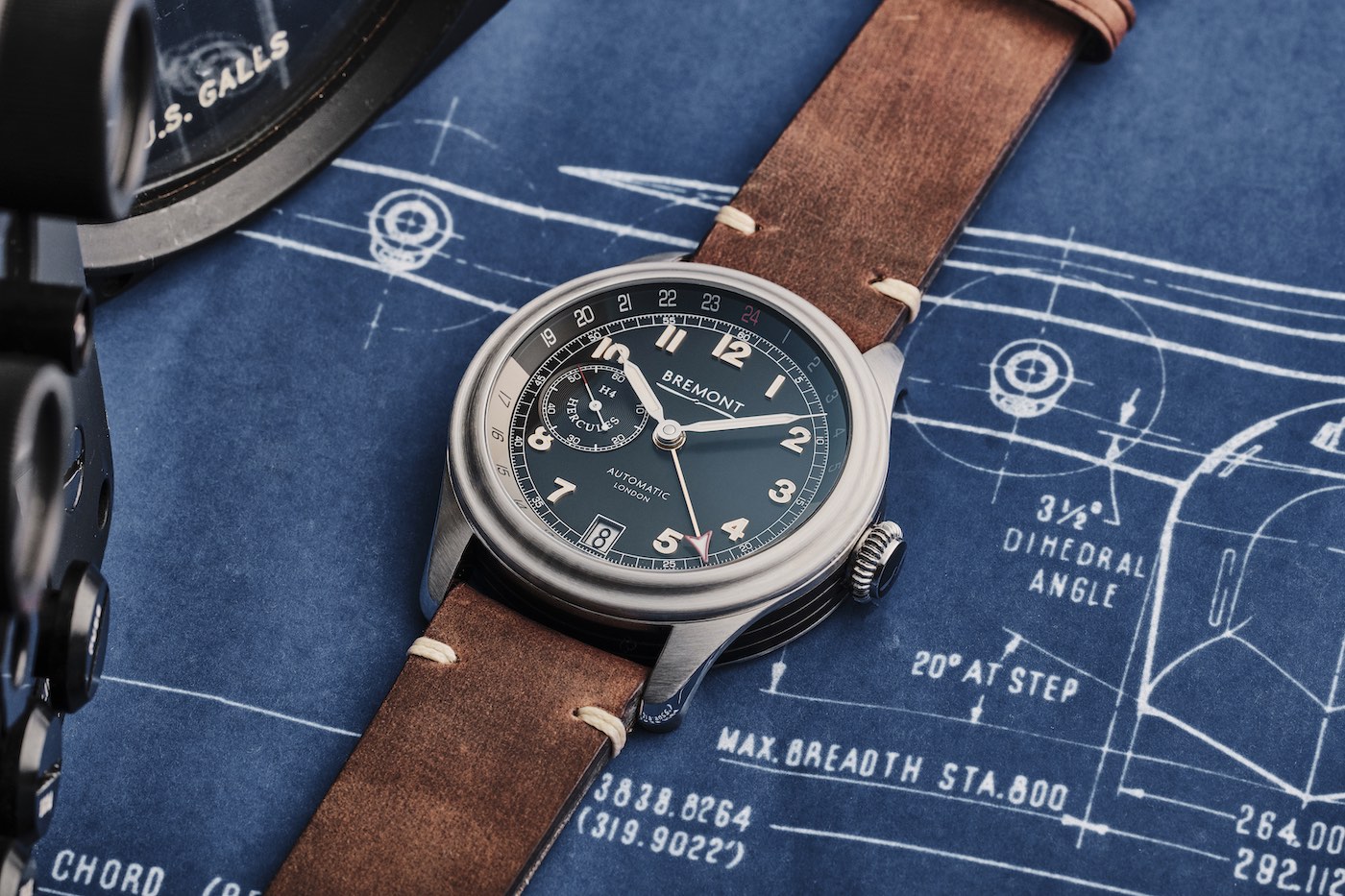 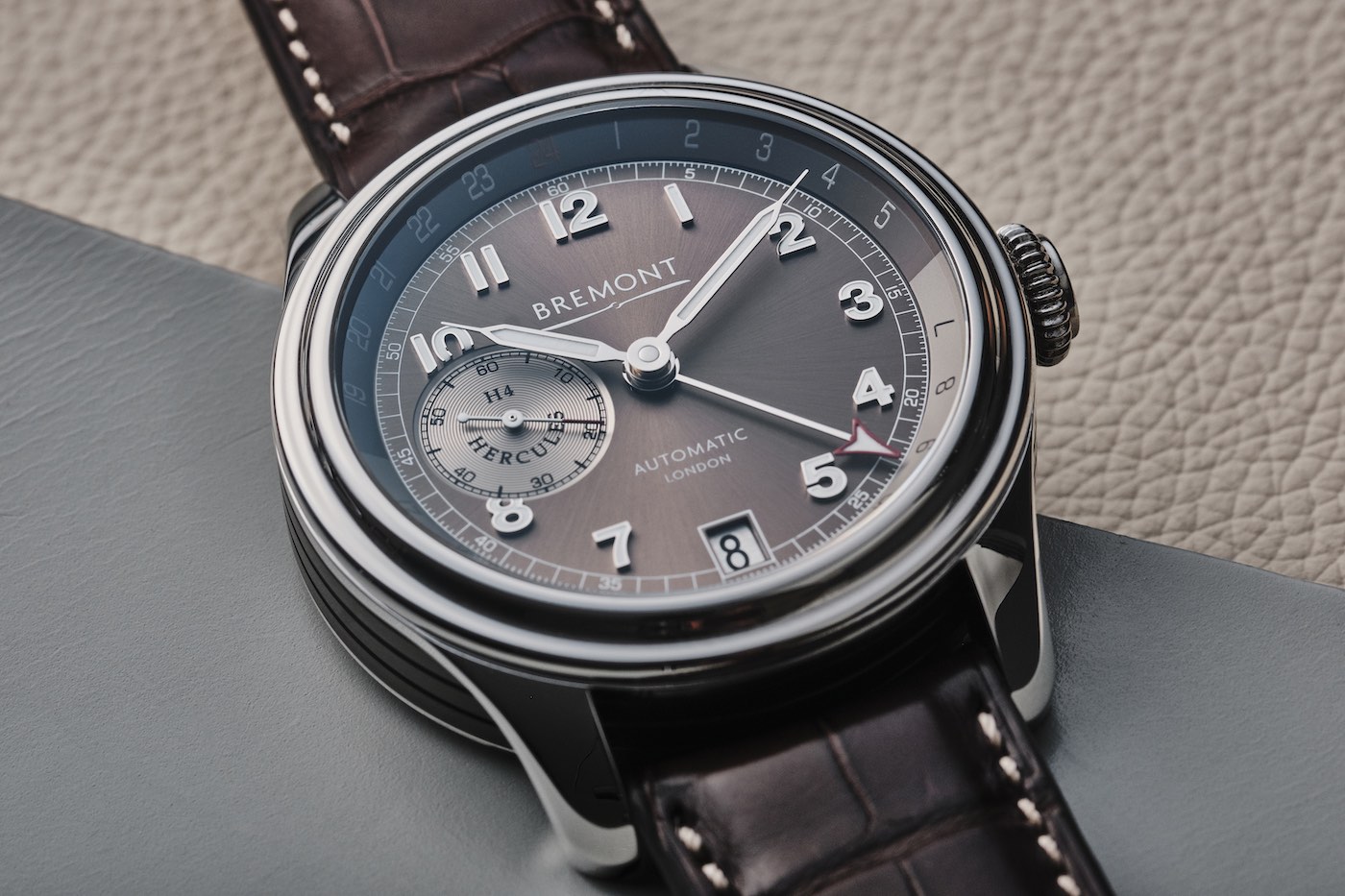 Everyone knows that aviation is Nick and Giles English’s “thing” and anyone who has met them would absolutely understand why they’re drawn to such a larger-than-life story like that of Hughes and the Spruce Goose. But how are the watches?

While I haven’t seen them in the metal yet (that will come next week), the H-4 Hercules watches look quite handsome and, again, just judging from press shots, very well finished. Done in either steel, rose gold, or platinum, each model measures 43mm-wide. On the dial, you’ll see the seconds sub-dial at 9 o’clock, date window at 6 o’clock, and the red arrow of the GMT hand. 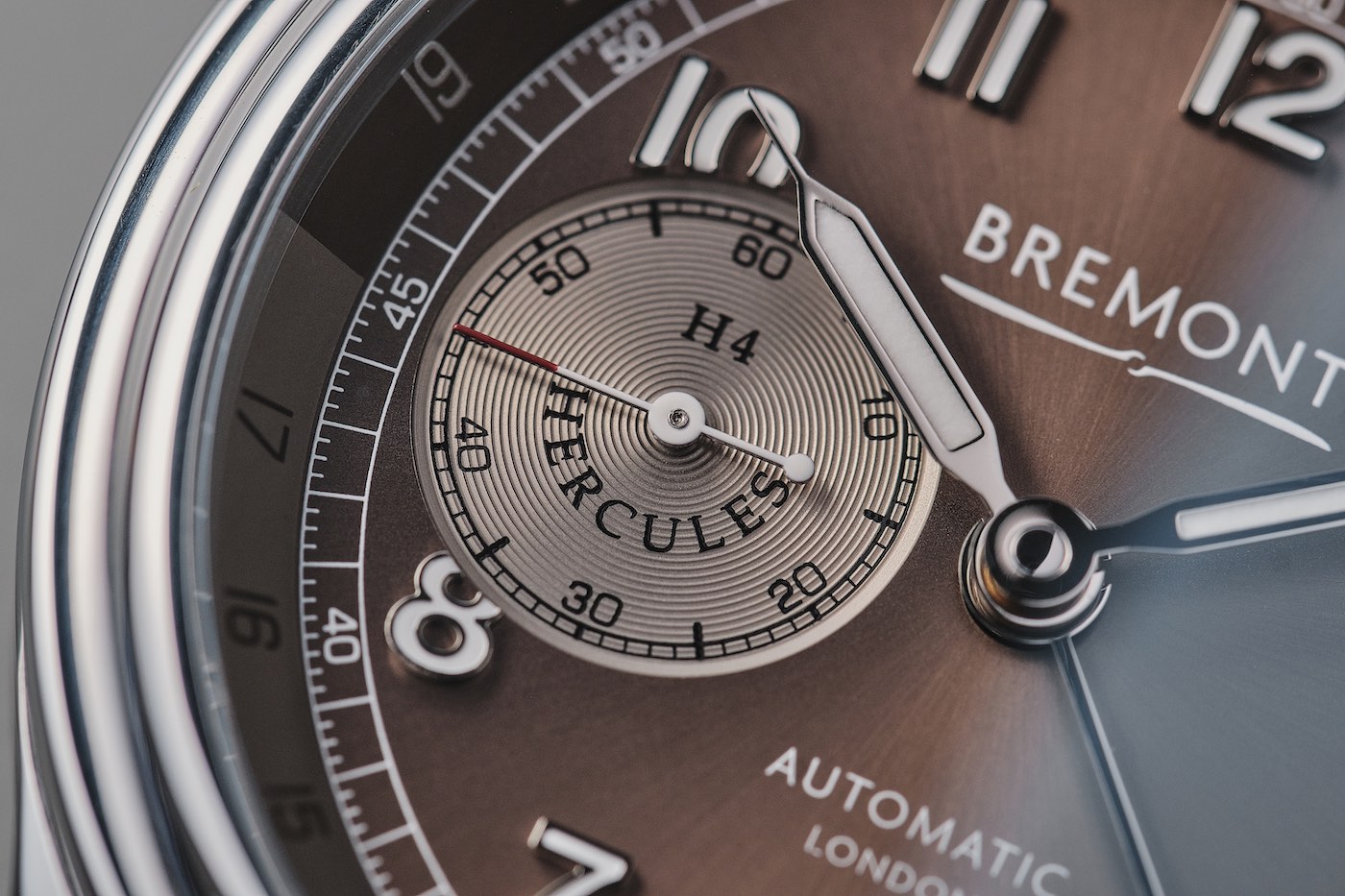 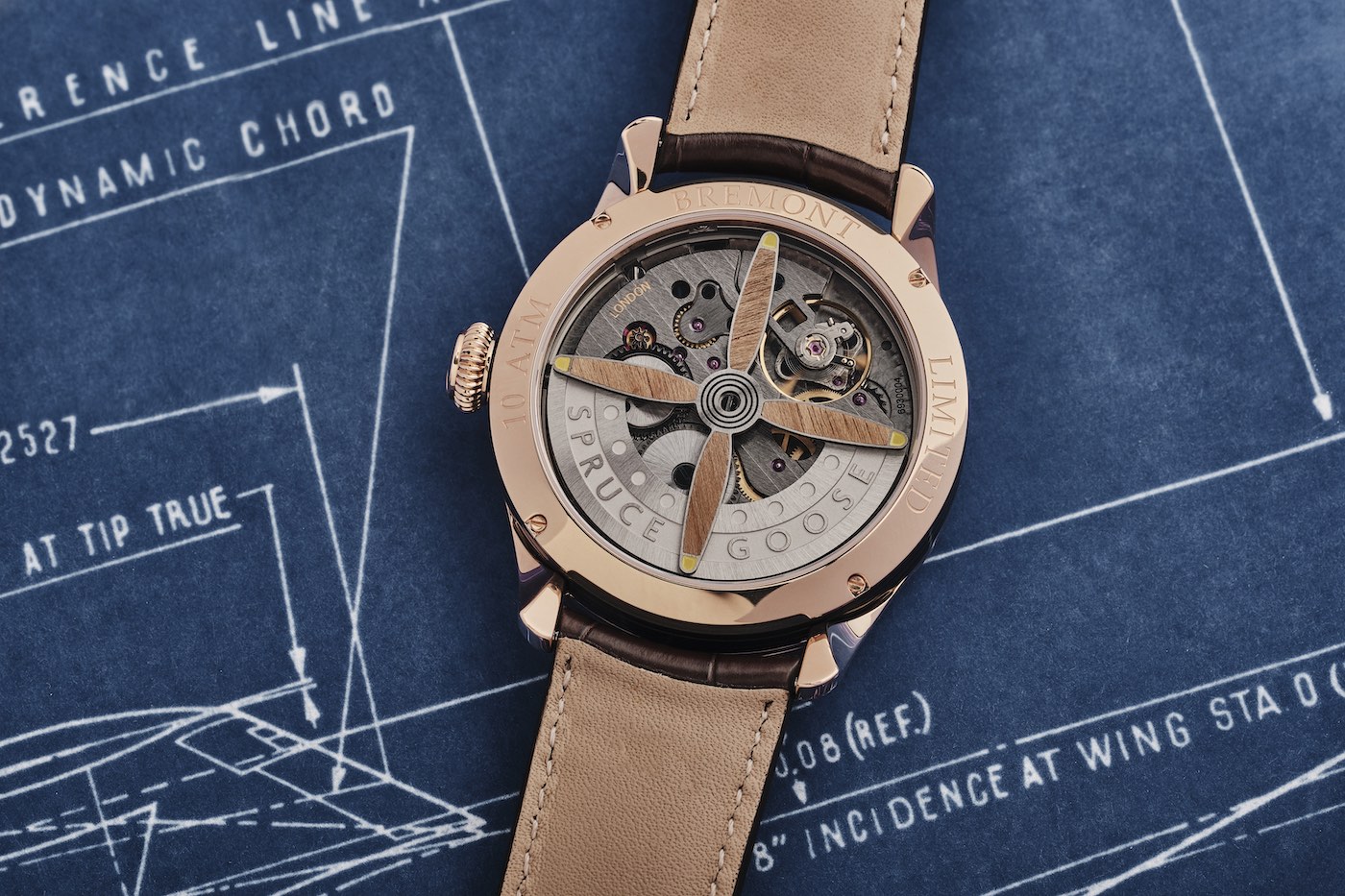 The new movement here is BWC/02 which Bremont says is “based on the original proprietary automatic BWC/01 calibre built in partnership with movement house, La Joux Perret.” Of course, the addition of the GMT function is what’s new here. 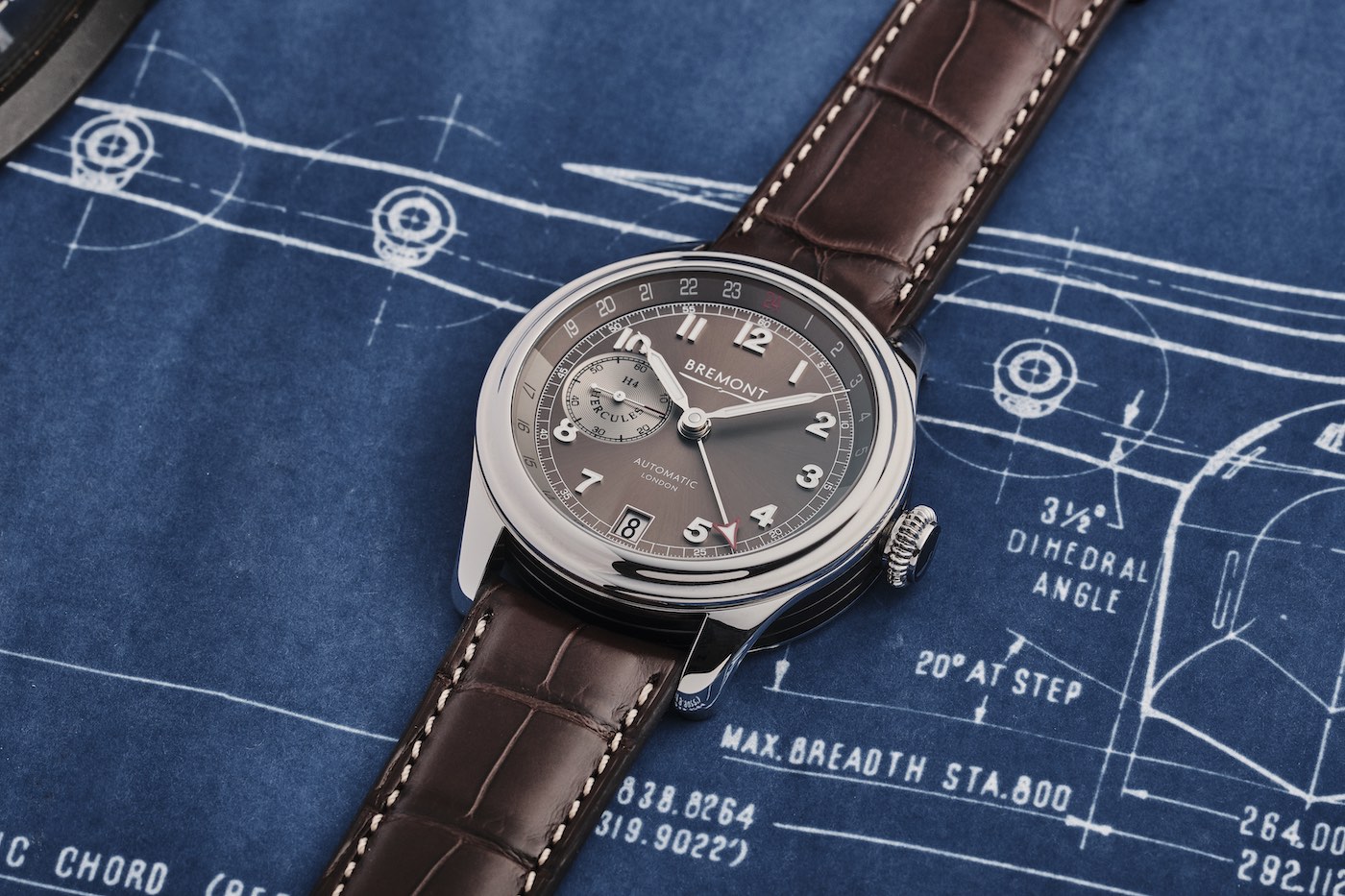 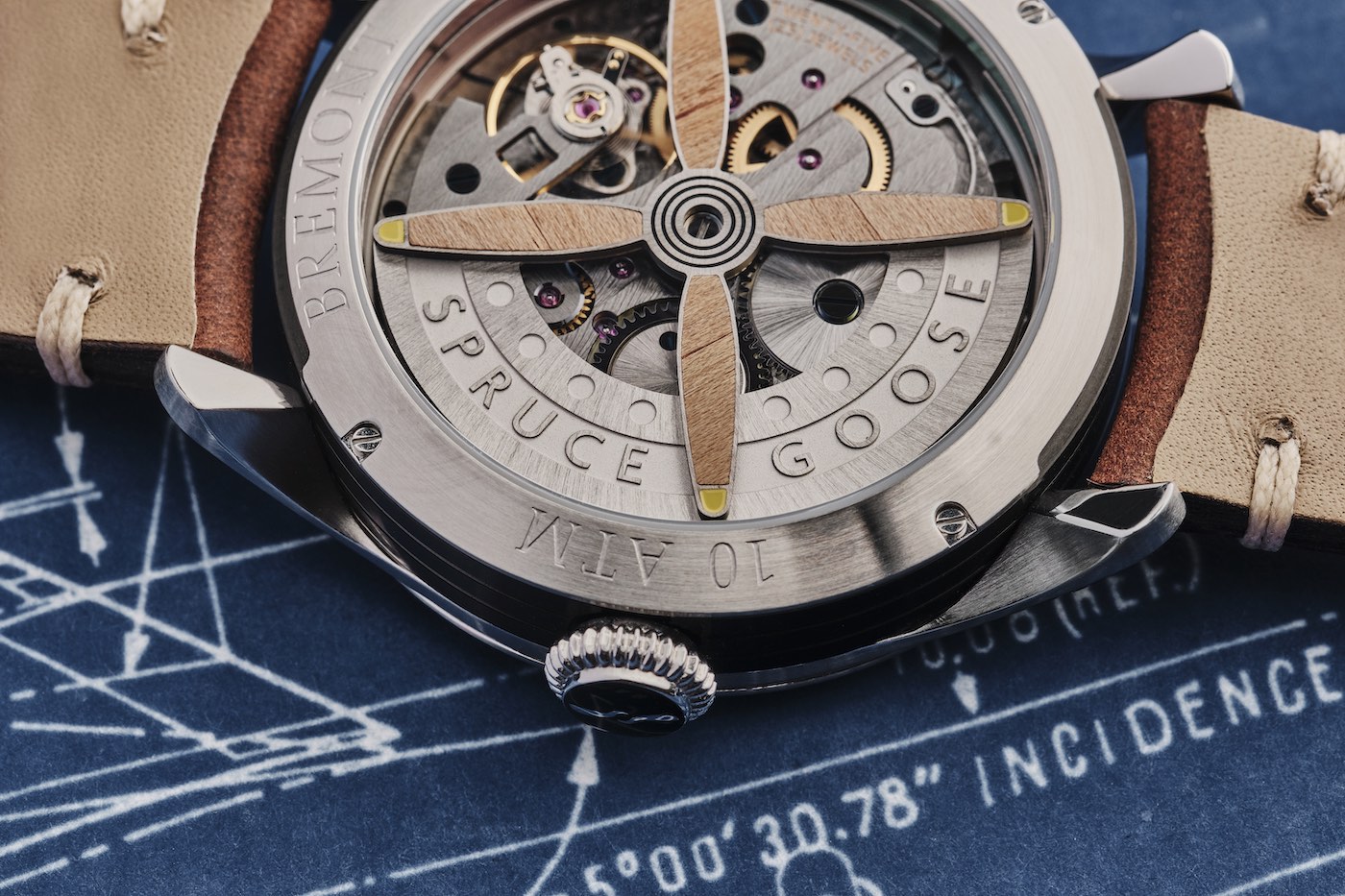 It’s on the caseback that you get some of the Spruce Goose DNA. When the plane was declared a national treasure and preserved, there was some birchwood veneer that had to be removed from the plane. This birch was housed at the Evergreen Museum in Oregon, which shipped it to the UK, where furniture maker Silverlining was able to cut it to size. The four tungsten rotors designed to look like propeller blades on the movement are finished with this birch veneer. Also, aileron fabric from the Spruce Goose’s control surfaces are sewn into the bridle leather watch packaging. 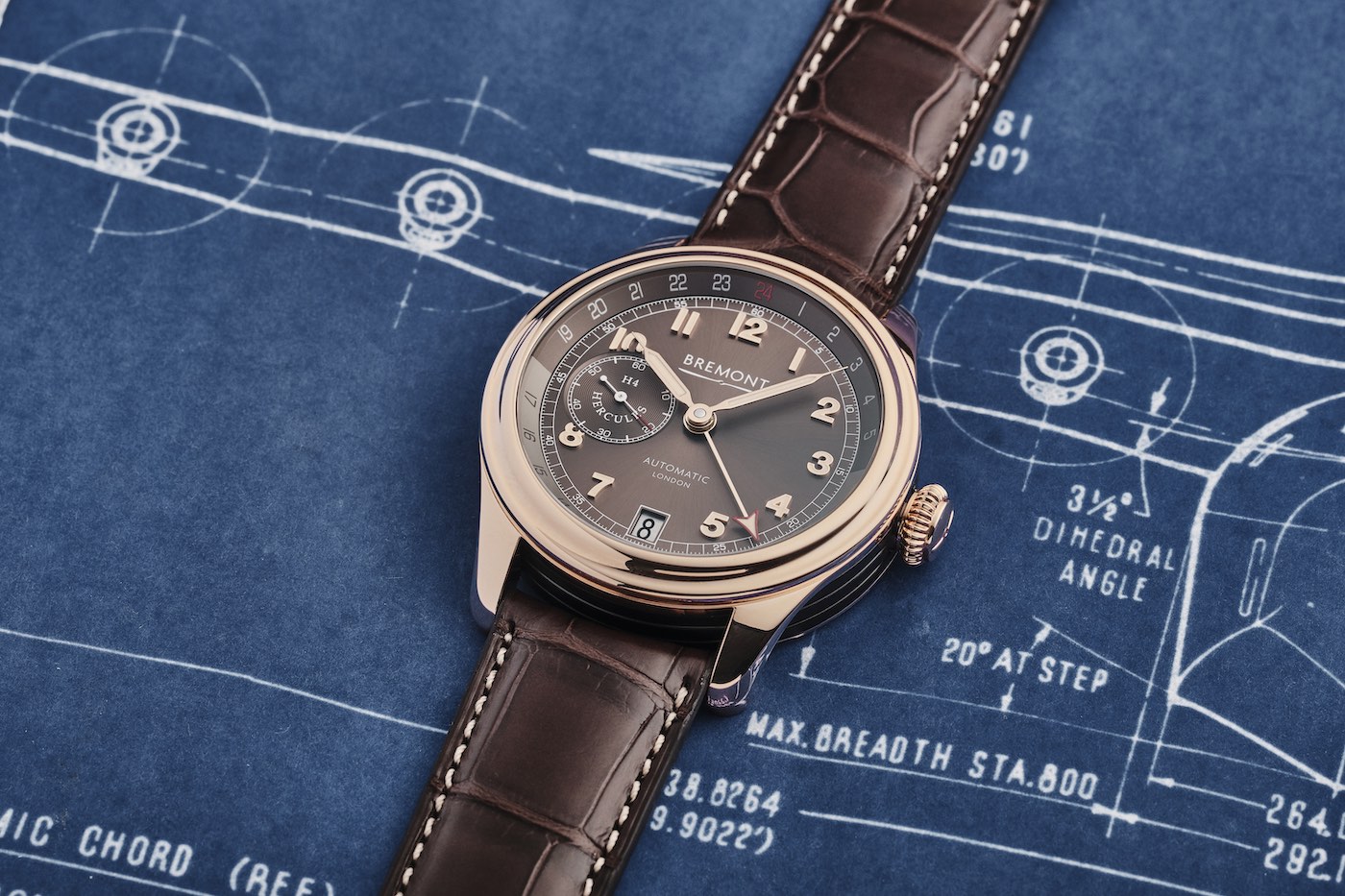 While I’m reserving final judgment on the Bremont H-4 Hercules until I can see them in person, I have pretty high hopes. The design and finishing of the case, dial, and movement are promising. Plus, I imagine all the Spruce Goose-heads out there must feel exponentially more excited about it. Again, there will be 450 pieces made in total with each of the 300 stainless steel models priced at $11,895, each of the 75 rose gold models priced at $20,495, and each of the 75 platinum models priced at $30,995. You can learn more at bremont.com.