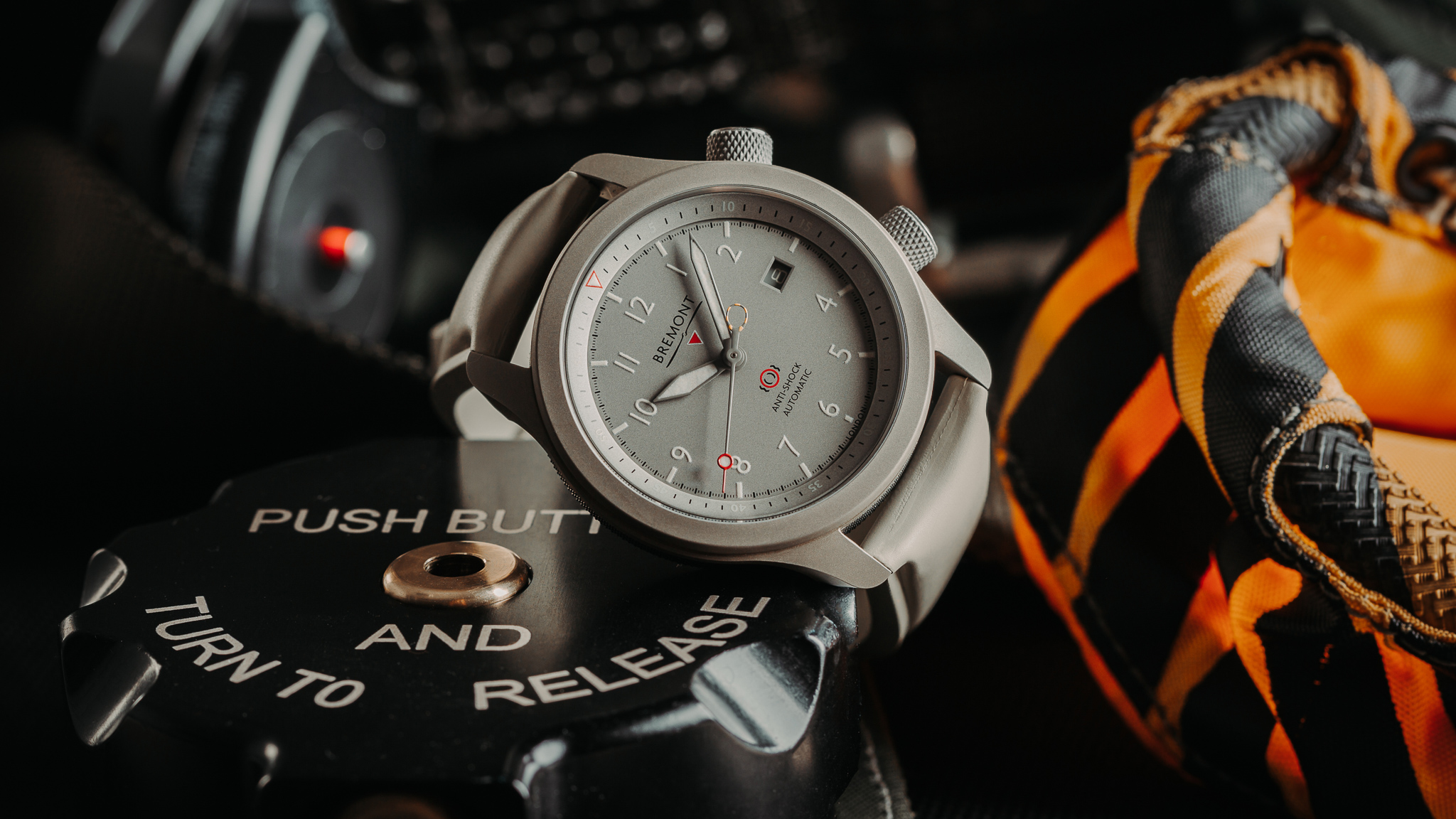 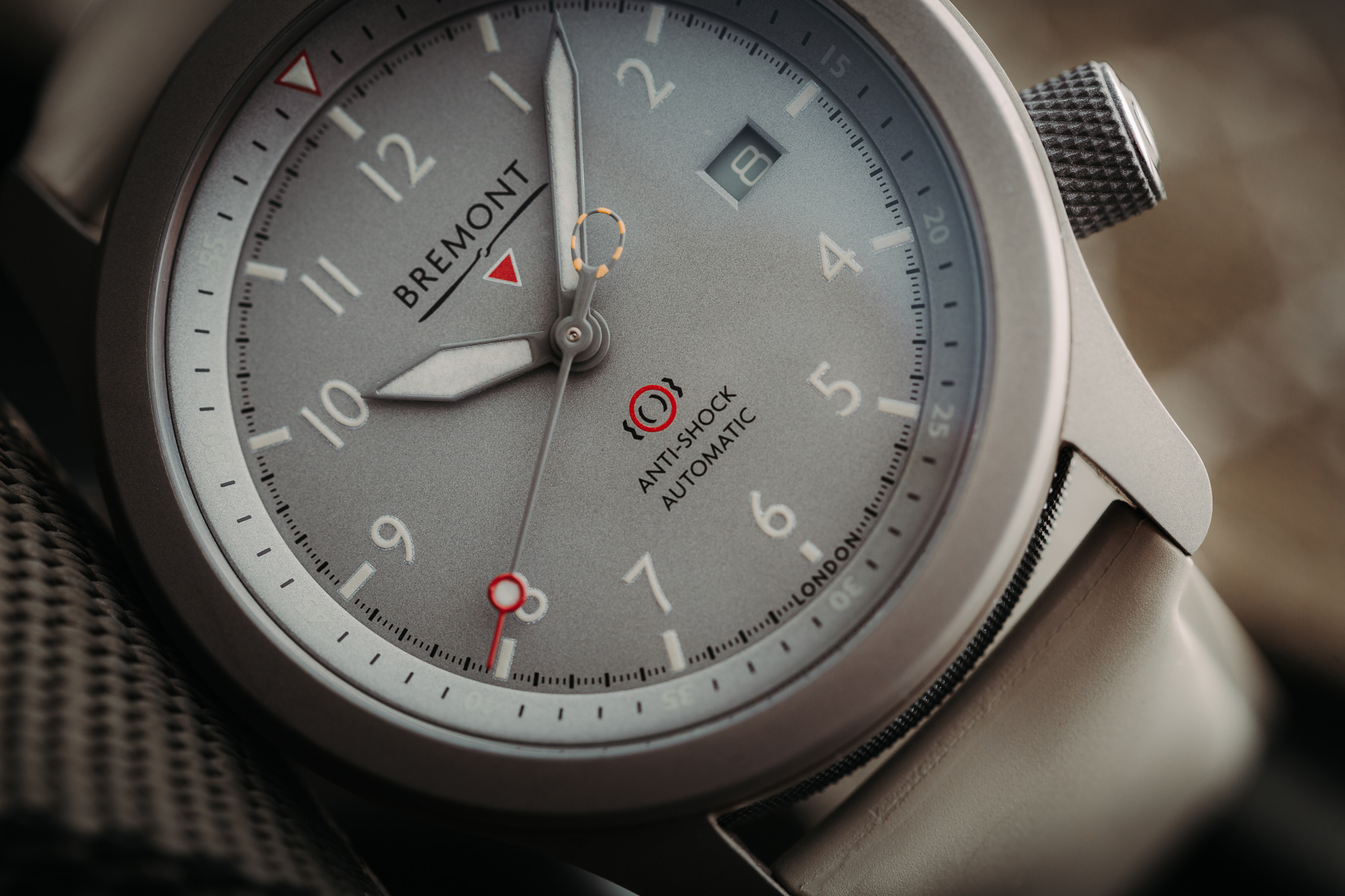 Over the years, the standard procedures used to test the shock resistance of any watch and its fully cased movement have tended to vary from brand to brand — from the classic “hammer test” deployed by most brands, to even a centrifuge famously used by IWC. But no brand, until Bremont came along in 2002, used a Martin Baker ejection seat as the gold standard for testing shock resistance. Now nearing its 20th anniversary, the British maker remains the only brand whose line of MB (“Martin Baker”) pilot watches is specifically designed and engineered to survive ejection from a stricken aircraft. And adding to that line is the new MBII “Savanna,” rendered in all-matte titanium, which makes for a stealthy, ultralight new aesthetic that ought to appeal to anyone with a serious need for speed. 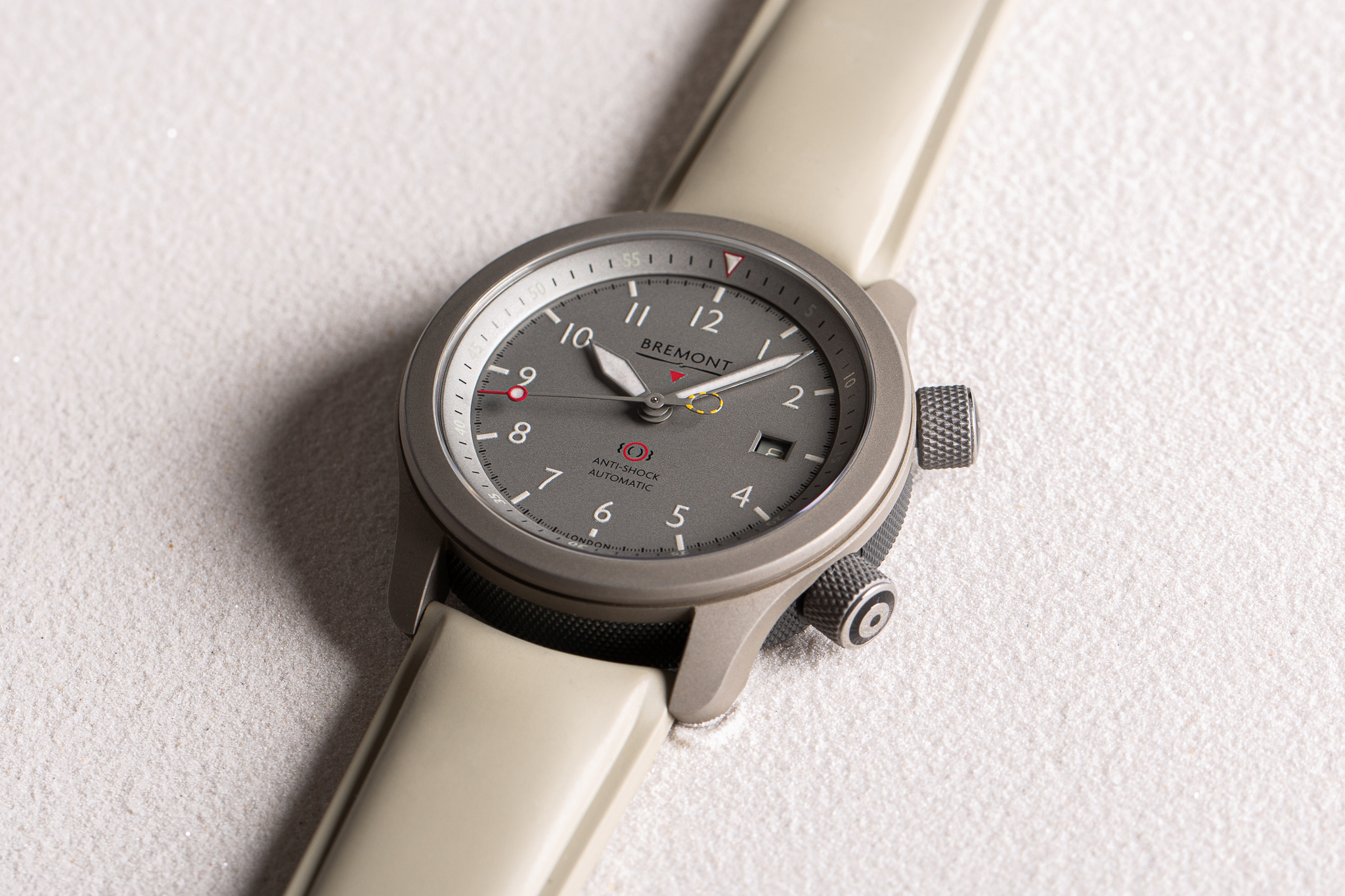 Traditionally speaking, the civilian variant of the MB watches (the MBII, in this case) has always been rendered in Bremont’s hardened stainless steel with the option of a colorful anodized aluminum mid-case barrel — a heavily knurled signature of this pilot watch that, for the better part of the last two decades, has understandably found favor on the wrists of active-duty military squadrons, as well as tool watch fans around the world. This new MBII maintains those key calling cards including that yellow striped “ejection release handle” counterweight on the seconds hand, while adhering to the 2020 updates to the MB collection that refined the handset and dial details (you might note that the new MBII dial only has a date, as opposed to the day/date complication from its earlier iterations), improved the tactile feel of the “Roto Click” inner bezel, and improved the overall wearability of the MBII’s 43mm silhouette by slimming the mid-case and shortening the lug-to-lug measurements. 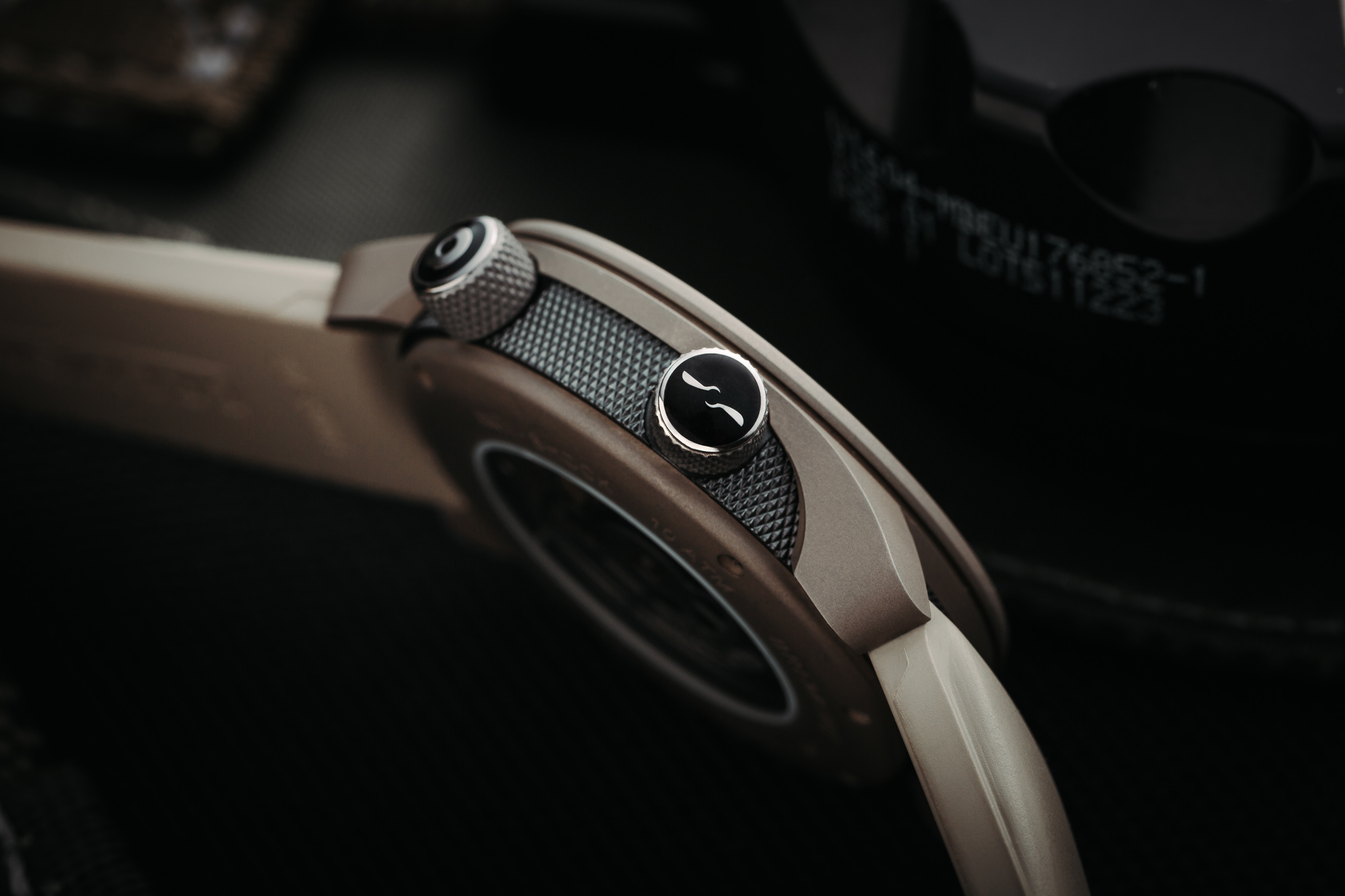 On top of those improvements, this new reference adds in a stark khaki finish that feels as though it could be a distant cousin of the all-ceramic IWC Top Gun “Mojave” capsule introduced in 2019 and expanded earlier this year. Now, regardless of which flight school you ascribe to, armchair aviators and flight suit-wearing fighter pilots are likely to agree that titanium is probably a more realistic material for a watch case to be actually deployed in cockpit use, but feel free to argue that one out in the comments. 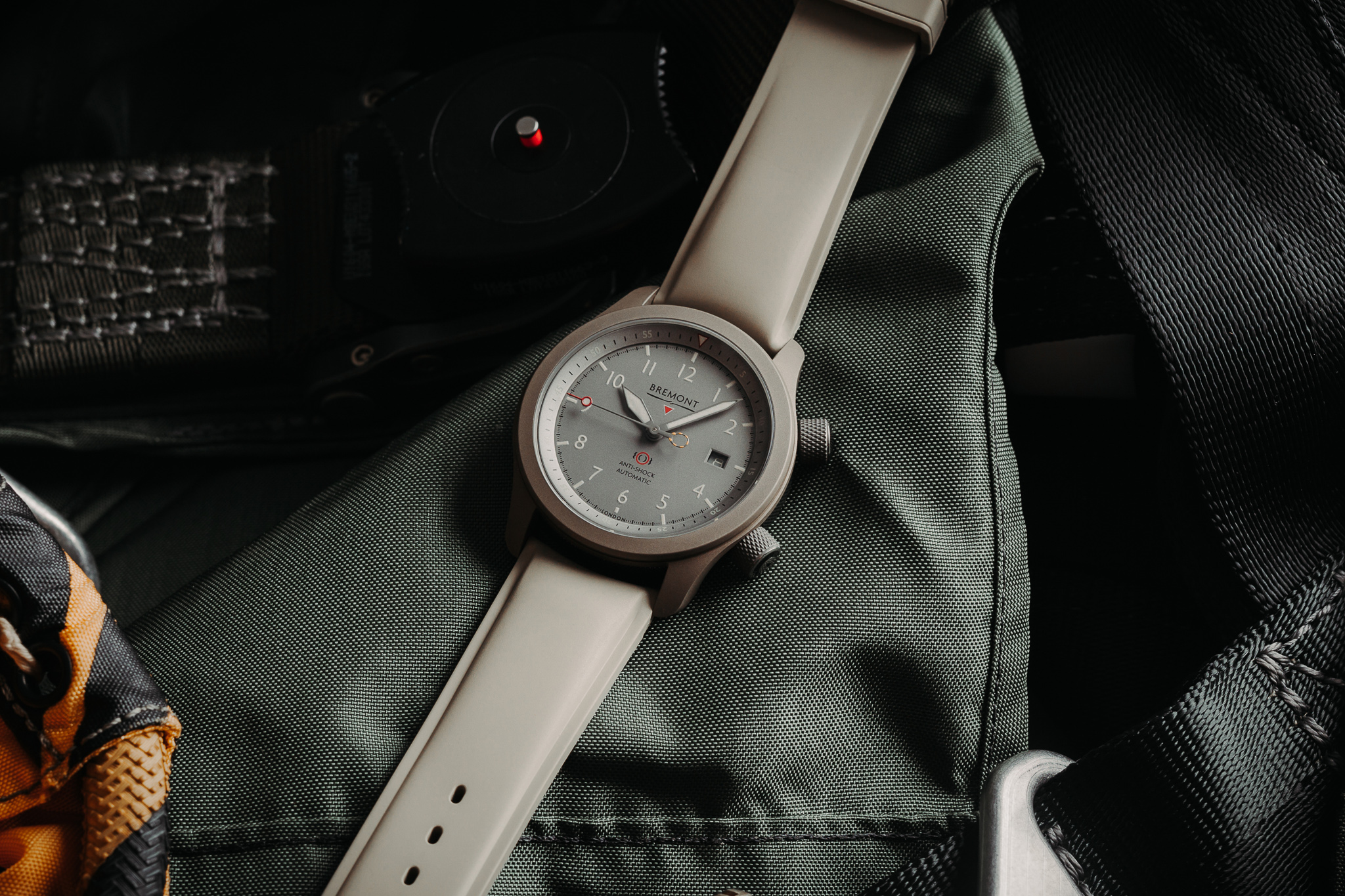 Done purely for aesthetics, this special titanium treatment renders the case in a very warm gray finish that’s designed to eliminate any potentially reflective surface — something that was once a combat hazard of the traditional aviator’s cockpit, though now perhaps much less so since the advent of radar. In addition to the rigorous live ejection tests, the MBII is also torture-tested in adverse temperature, altitude extremes, and even salt fog, making this watch a viable option for active-duty aircraft carrier crew. Also quite cool is that all of these tests are done locally in the UK, in addition to the case finishing and manufacture, which are now being conducted at the brand’s new manufactory that opened last fall at Henley-on-Thames. 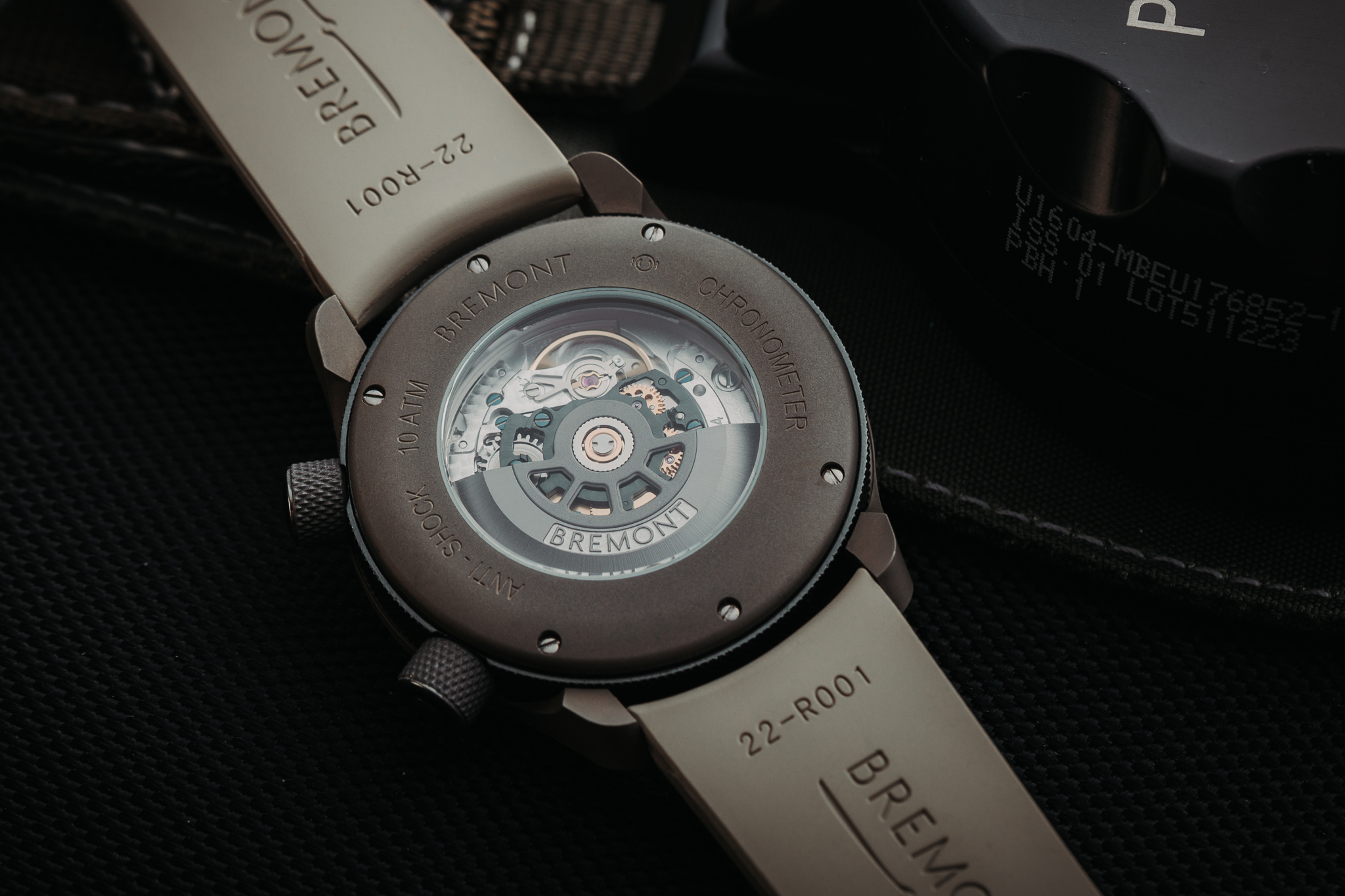 The new MBII Savanna is still powered by Bremont’s BE-36AE — an ETA 2836 base that’s locked in place inside Bremont’s proprietary movement holder. Its automatic winding bridge has been reinforced to counter the unique shock experienced from an ejection scenario, and exclusive to this Savanna reference, the rotor has been skeletonized and finished with a nifty ruthenium plating for that extra bit of panache. This movement still maintains around a 40-hour power reserve, and, in a nice touch that’s also unique to this particular release, has a custom date wheel set on a gray background to match the dial.

For its debut in titanium, the Bremont MBII Savanna has a price of $5,795 USD, which is around the same price as the standard stainless steel variant on bracelet. As always, you can learn more about the MBII watches and Bremont’s longstanding partnership with the storied ejection manufacturer at bremont.com.