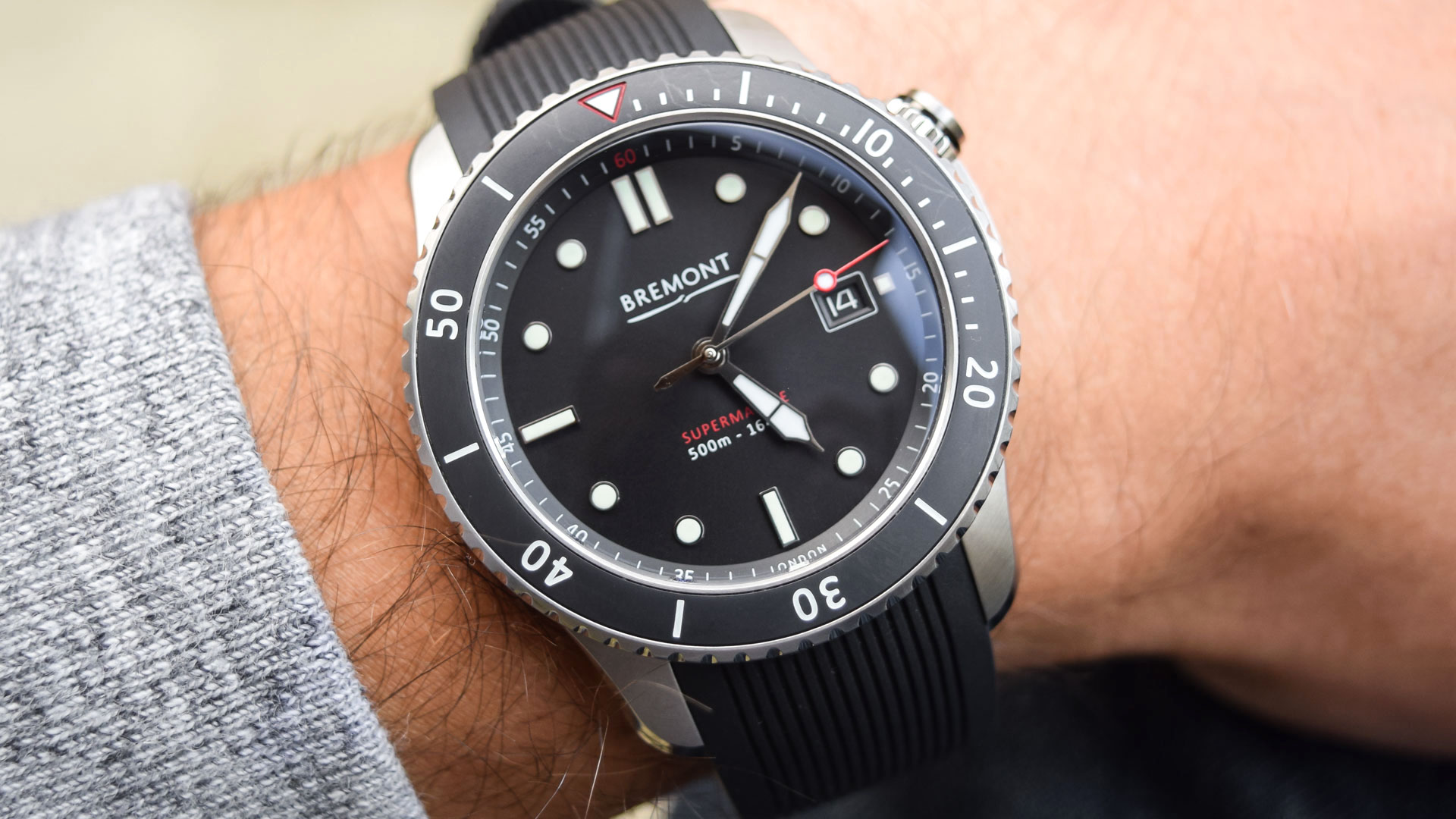 Bremont, a British brand closely associated with aviation, has produced several chunky diver’s watches since 2010, including the 43mm Supermarine and 44mm S2000.  However, by 2018, the time had more than come for some new subaquatic offerings, and Bremont stepped up with a totally new 40mm watch series in the S300, as well as an updated 500m Supermarine they’re now simply calling the S500. Here, in a wrist time review in which I promise not to attempt to write with a British accent, I’ll share my experiences wearing the newly updated Bremont S500, both on land and beneath the mighty Great Lakes waves. Very well, off we go then, chaps. 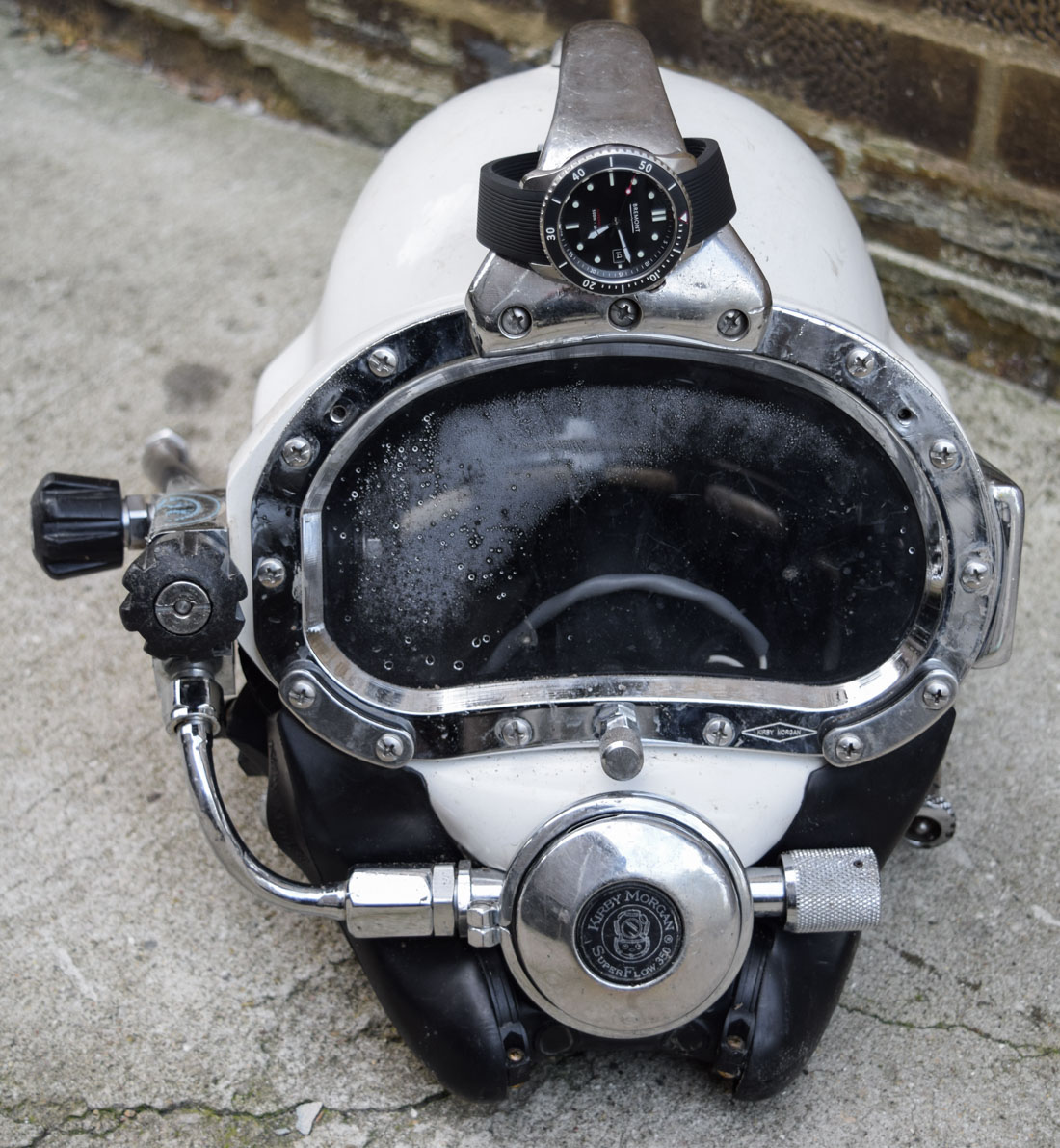 Boasting a stainless-steel case with Bremont’s signature “Trip-Tick” three-piece design, 500 meters of water resistance, and a screw-down crown in an uncommon 2 o’clock position, the original Supermarine collection was well received by the watch-buying public and rounded out Bremont’s largely flight-centered collection. In fact, the Supermarine was even adopted by Bremont fans in the British military, with special editions having been ordered by (not to be confused with issued to) none other than Royal Navy Clearance Divers. 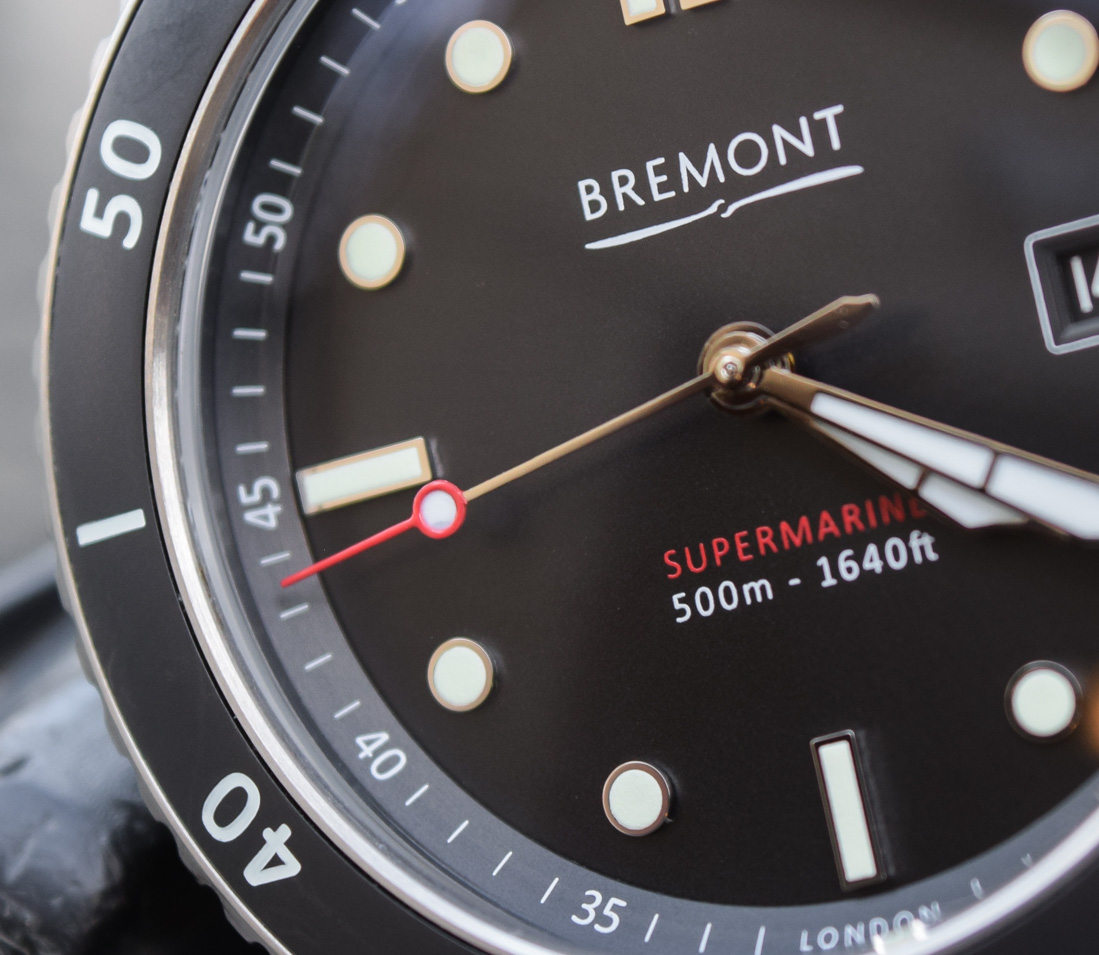 While a diving watch through and through, the Supermarine is named after the Supermarine S6B Schneider Trophy Seaplane, a British-made amphibious aircraft for those who absolutely can’t be bothered with a land-based runway, making the Bremont Supermarine a diving watch with a tip of the bowler to the aviation history felt so strongly through much of Bremont’s collection.

So, is the Supermarine simply a watch for Bremont fans to take snorkeling on vacation, or is it actually a functional professional diving watch deserving of its decidedly badass amphibious heritage? Luckily, for our readers, I just so happen to be a commercial diver, and I endeavored to put the Supermarine through its paces. But first, some background. 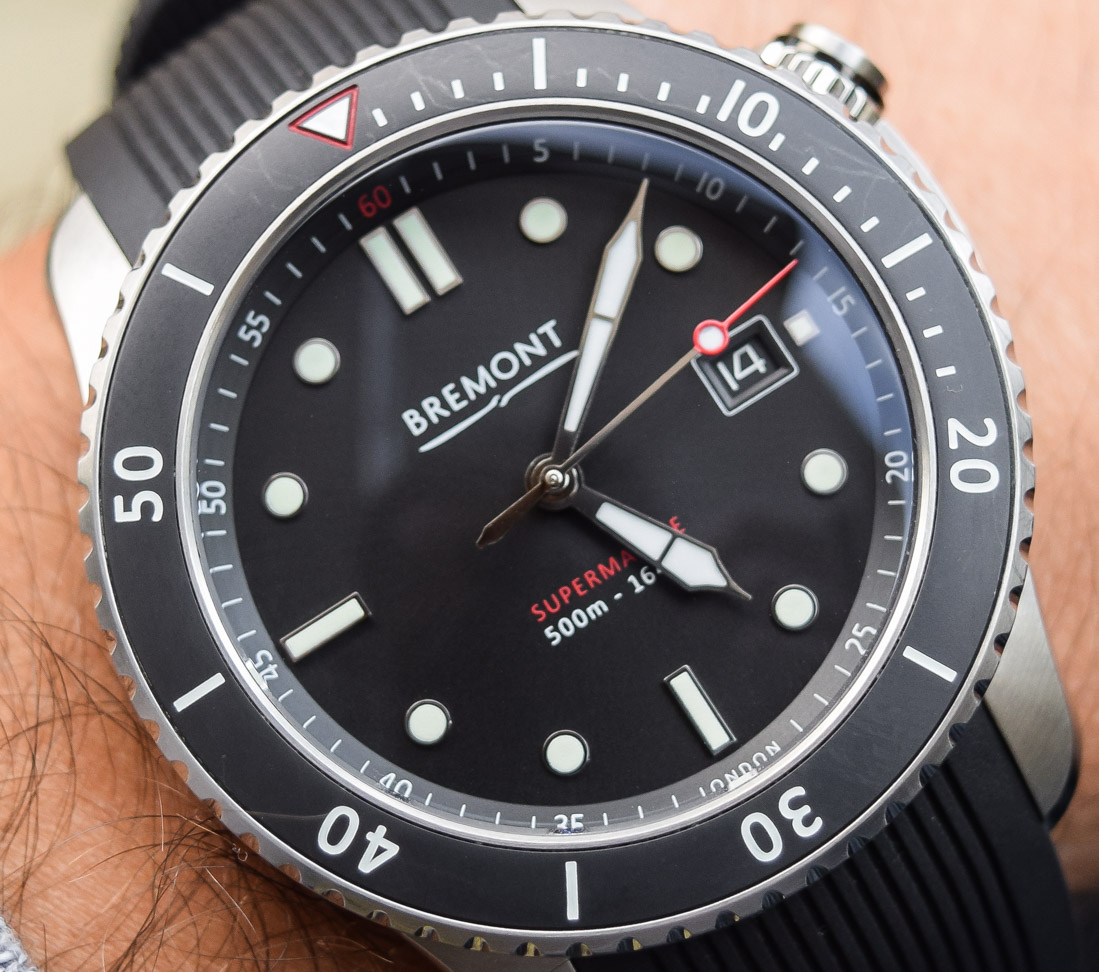 Bremont’s SupermarineS500 differentiates itself from its predecessor with an updated dial. The case, crown, strap, bracelet, and other elements are exactly the same. This is more a case of Bremont refining their divers and diving watch aesthetic to create a cohesive line of ocean-going, aviation-inspired, watches to suit the watch buyer, who has likely changed since 2010.

The original Supermarine featured a sector dial, a day/date function, straightforward rectangular or circular hour markers to match the lollipop hour and sword minute hands, and a seconds hand not even featuring its own lume (but the ISO rating, gasp!). While the original featured a functional and distinctive design, for me, it was a little bit busy for what a diver’s watch dial should be, the prime function of which is legibility in the subsea environment. 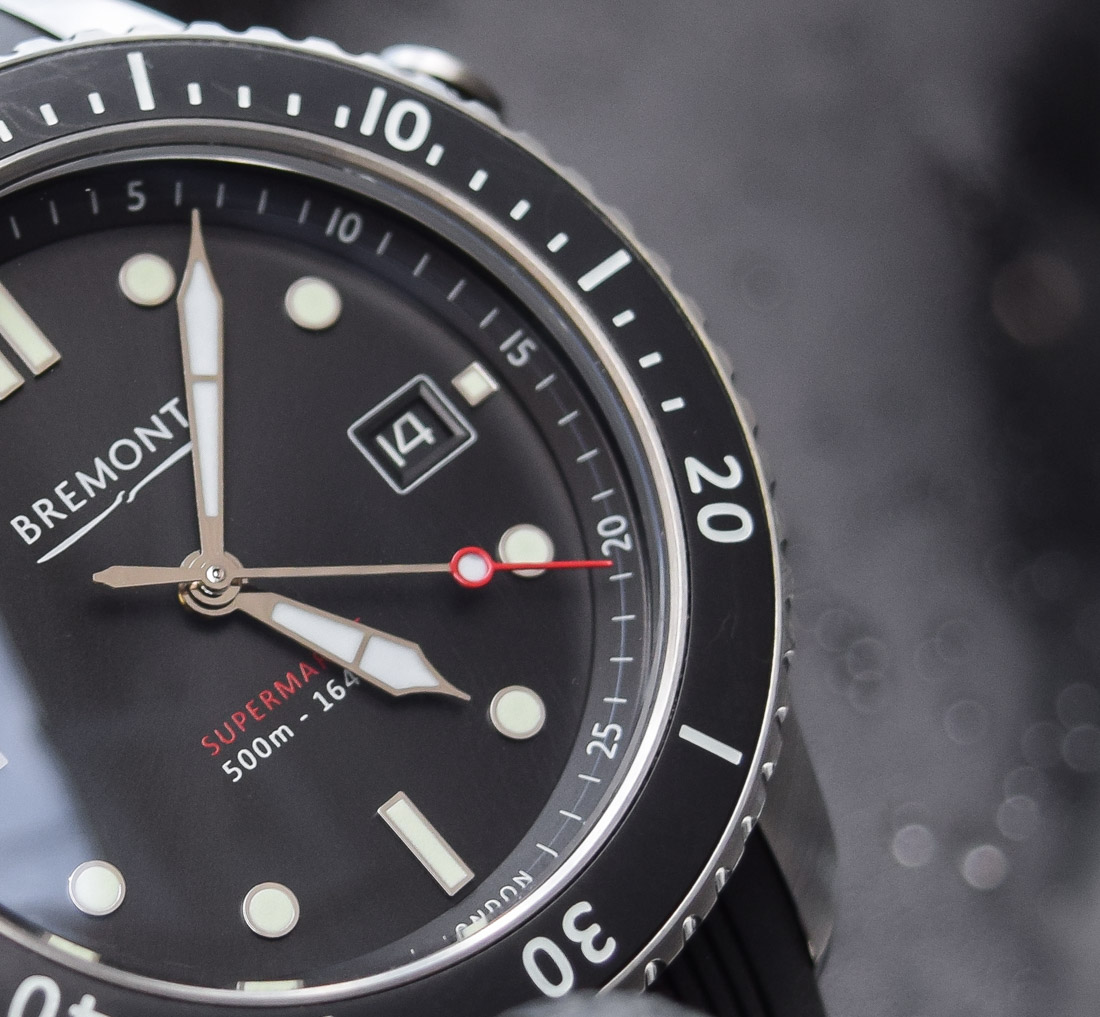 With the updated Supermarine S500, time-telling elements have been dialed back, so to speak, with similarly shaped hour markers as a base design, but with less going on overall compared to its predecessor. Gone are the mostly decorative sector dial design, day function, and the lollipop hour hand, replaced with an attractive pair of Super-LumiNova inlaid sword hands, a lumed and red-tipped seconds hand, and less obtrusive date-only window in their respective places. While there was never anything particularly wrong with the old design, the new version is one notch closer to true tool watch than the original, with more of an emphasis on actual time telling. It’s also interesting to note the other new divers from Bremont, the smaller S300 series, have a dial very similar to the Supermarine S500, tying the whole dive watch offering together. 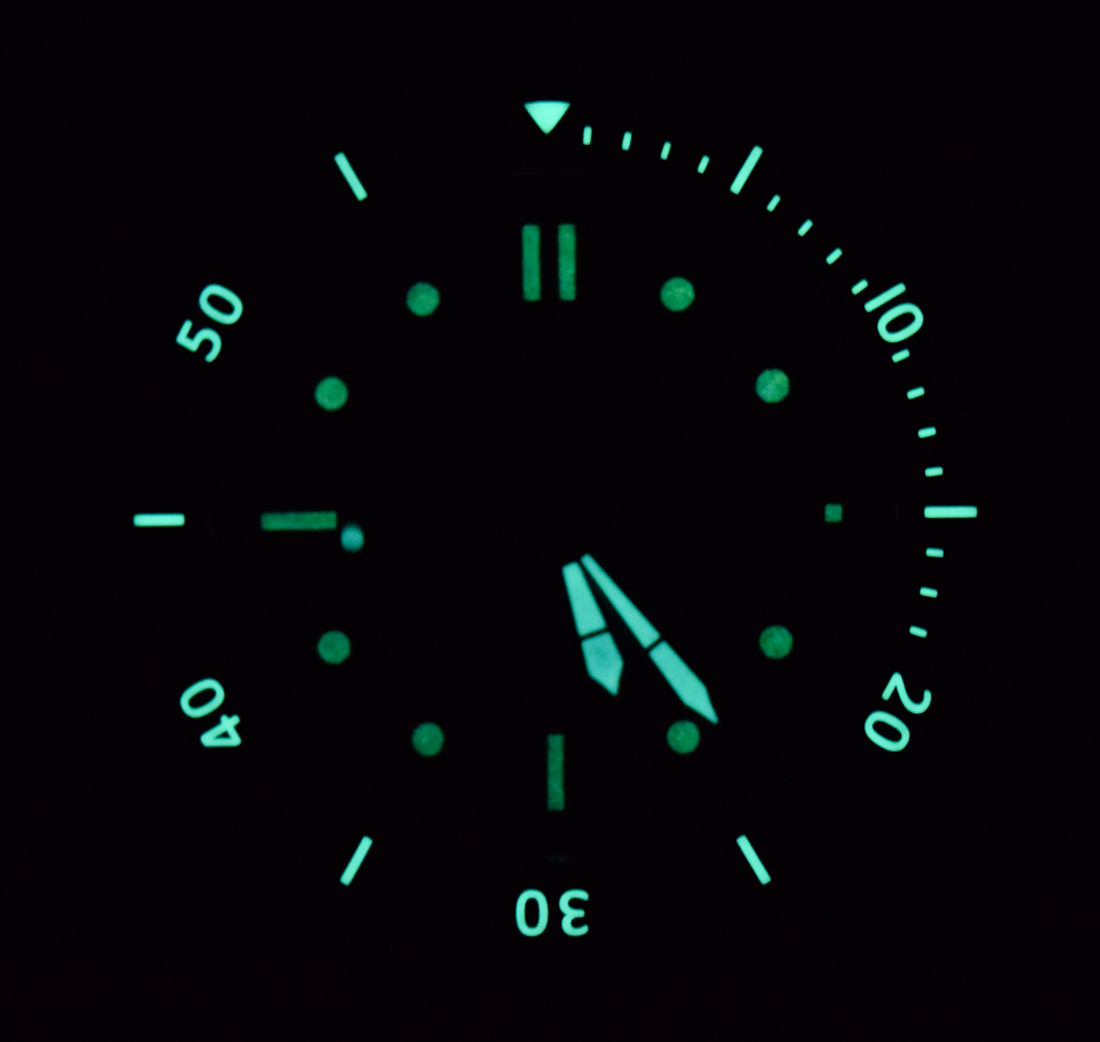 Lume is, frankly, excellent on the S500 dial, with Super-LumiNova in plentiful supply everywhere you might ever need it. The watch lights up like a torch and lasts all night, a fact I checked on a recent eight-week diving job that saw me working underwater and underground on overnight shifts. In that truly as-dark-as-dark-can-be environment, the S500 shined like a beacon for the length of my five hour bottom times and beyond, proving the watch to be a functional tool for deep, dark diving adventures. 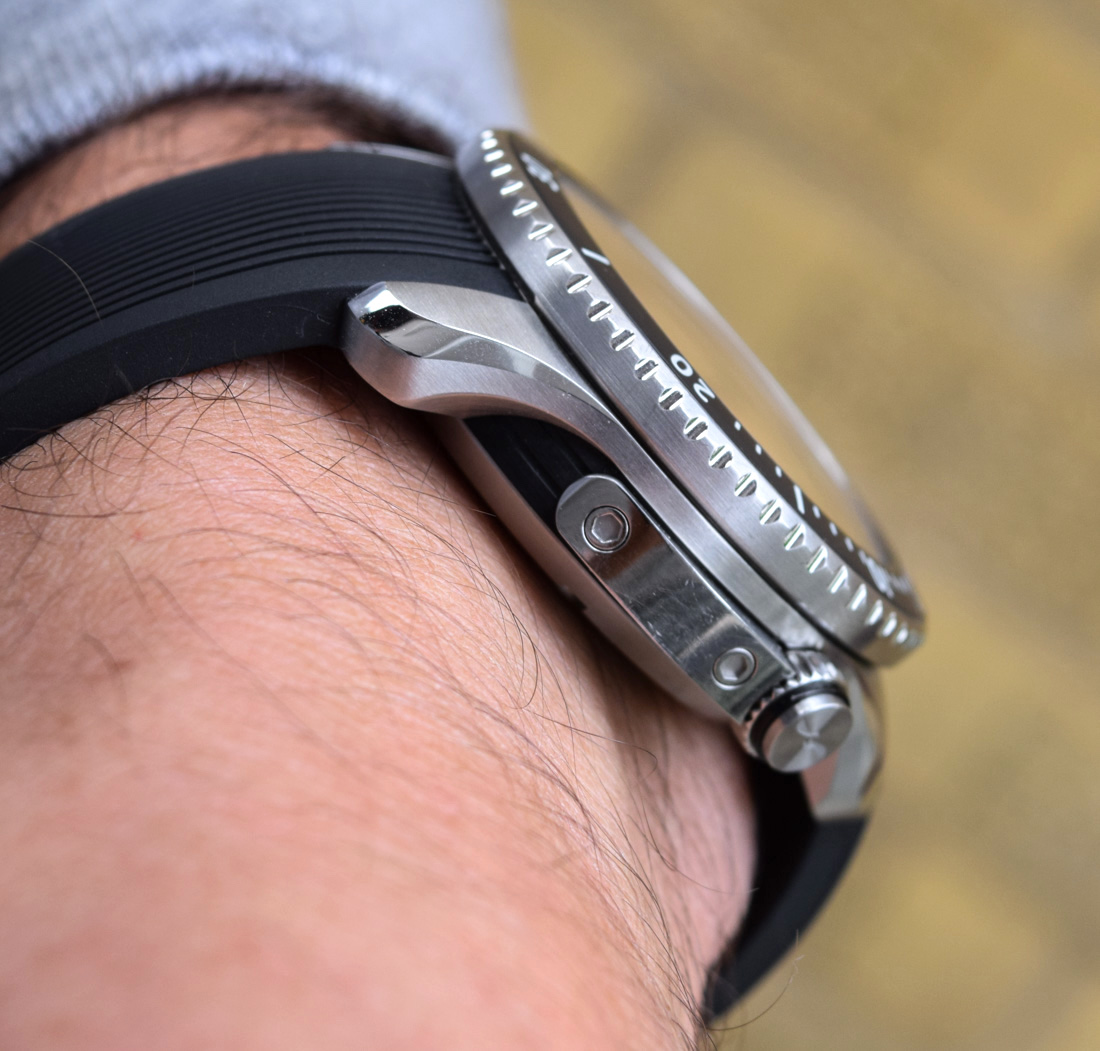 Bremont hasn’t changed anything in the case design. The Supermarine S500 still has the well-loved three-piece, 43mm design originally built for the Supermarine, with a center section Bremont calls the “barrel,” in DLC-coated black to contrast with the polished and brushed stainless-steel portions found elsewhere. Case finishing is perfect, as it should be for the price, with refined bevels and alternating use of polished and brushed finishes. However, thinking for a moment as a diver more than a watch nerd, I can’t but wonder whether a three-piece design might be less water-resistant than a more traditional case design. Indeed, there have even been one-piece watch cases in the annals of diving history, with Seiko’s titanium and ceramic tuna series being the most obvious example, the longevity of which speaks to their water-tightness in real use. 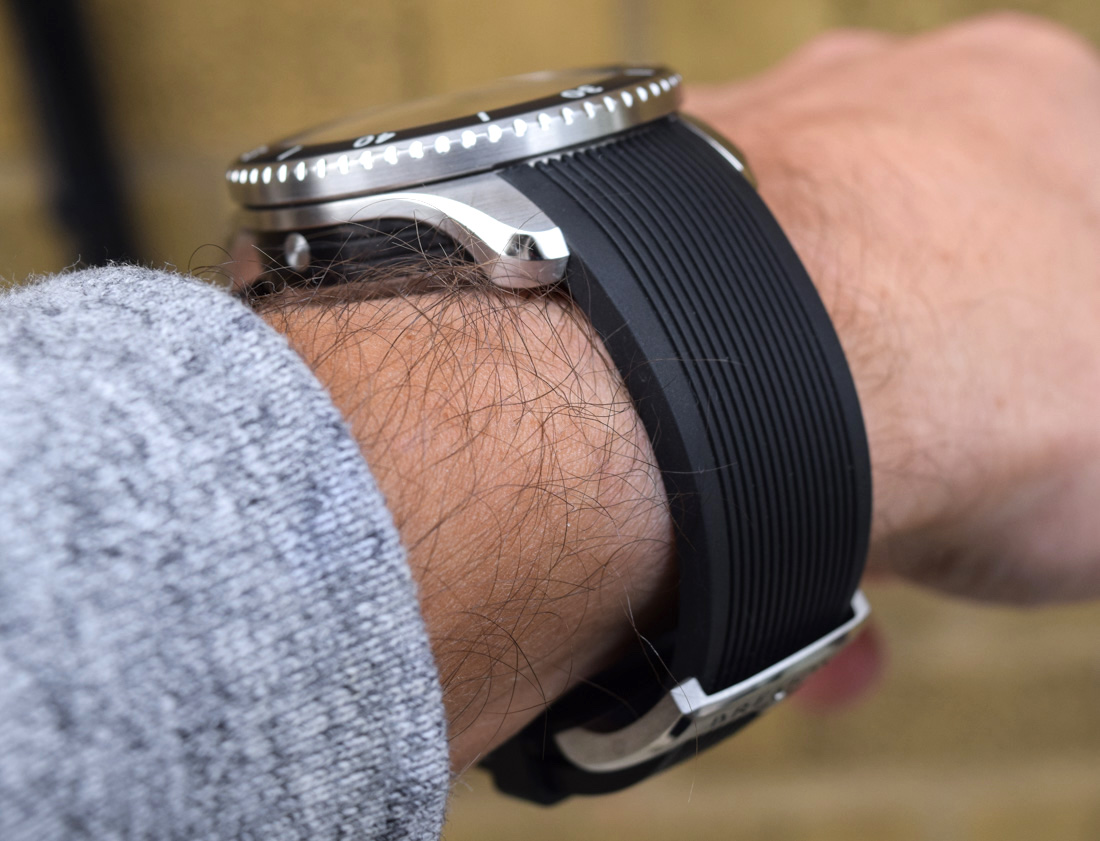 A three-piece case construction (I’m sorry, Trip-Tick) on a diving watch seems a bit like asking for trouble. Typically, in diving, the fewer gaskets and seals a piece of equipment has, the less likely it is to leak, especially over time and after hard use. However, in this case, it’s fair to assume most S500 wearers will seldom take their watches diving, and I’m confident the design is as stout as need be in practical, daily use. And, for what it’s worth, the watch was absolutely worry-free for me when used for actual diving, and I was really trying to live up to Bremont’s “Tested Beyond Endurance” slogan.

Anti-magnetic considerations are also taken in the Supermarine S500, with a soft iron Faraday cage to protect the watch from magnetic fields common in the commercial diving environment, due to all the large equipment carrying heavy current. While you don’t always see this kind of anti-magnetic protection in divers, it’s a nice feature and lends security to the COSC-graded timekeeping ability of the movement ticking within.