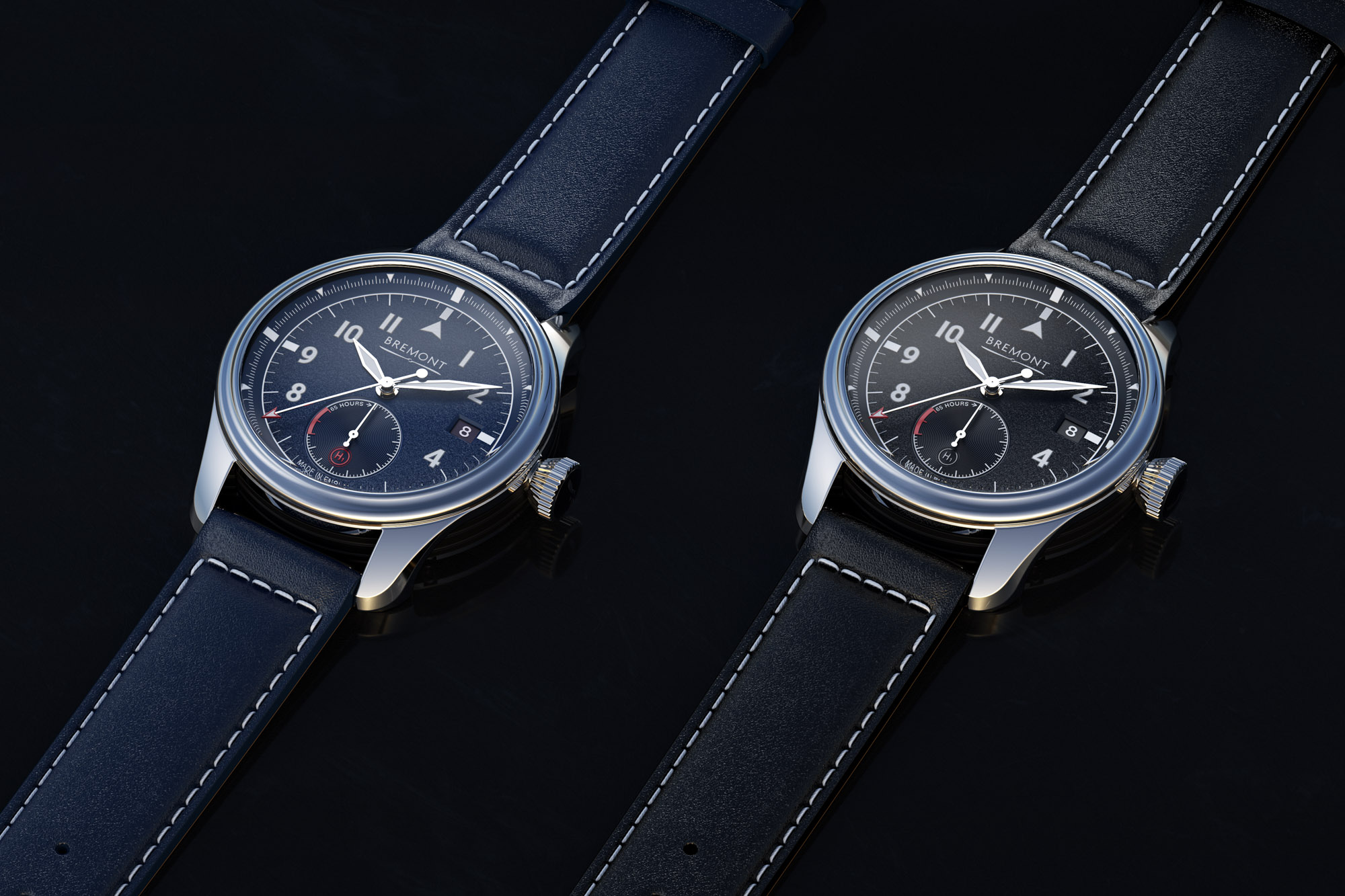 Although Bremont now produces a wide variety of different timepieces, it is arguably the brand’s various pilot’s watches that best embody the original spirit of the company. Bremont founders and brothers, Nick and Giles English both have a lifelong passion for flying planes, and the brand’s propeller logo is a direct reference to their intertwined relationship with the world of aviation. Joining the lineup for this final stretch of 2022 is the Bremont Fury, which represents a contemporary take on the classic three-handed pilot’s watch. The “Fury” name is a reference to some of the world’s most famous historic fighter aircraft such as the 1930s Hawker Fury and the World War II-era Hawker Sea Fury. In addition to offering a fresh take on a familiar style of timepiece, the Bremont Fury is also powered by one of Bremont’s own ENG300 movements, which is produced from within the brand’s recently constructed manufacturing and technology center located in the heart of Henley-on-Thames, England. 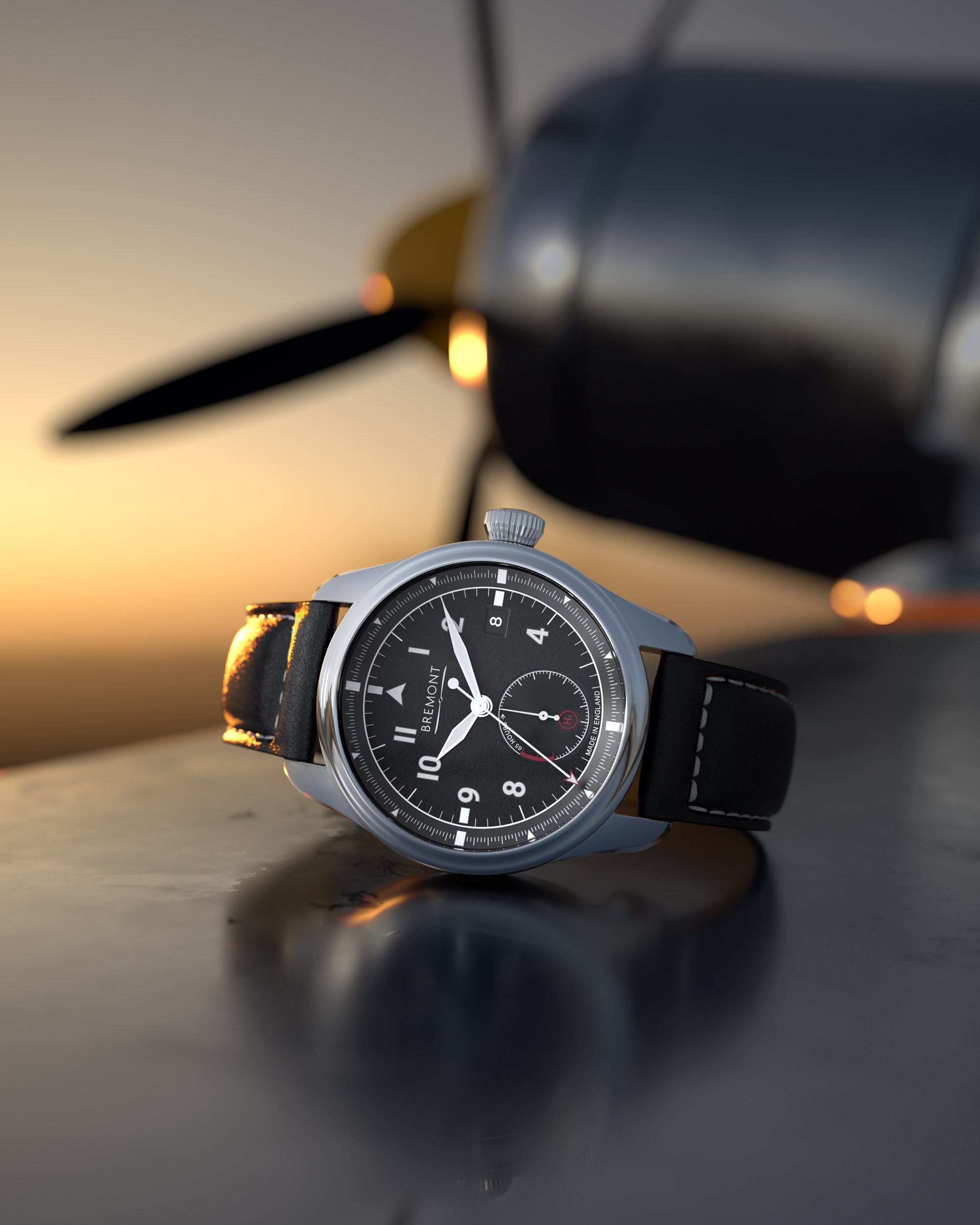 When looking straight at the watch, the overall case shape of the Bremont Fury offers a somewhat similar profile to a traditional pilot’s watch, with a large round dial, a thin fixed bezel, and relatively thick lugs for an intentional and purpose-built aesthetic. With that in mind, since the Fury utilizes Bremont’s innovative Trip-Tick case construction, where the central middle section is a separate component from the upper part with the lugs, the side profile of the Bremont Fury will be significantly different and more dynamic than any traditional pilot’s watch. As far as the dimensions of the case, crafted from stainless steel, it measures 40mm in diameter by 12.99mm thick, with an overall lug-to-lug distance of 49mm, plus 20mm lugs for easy strap changes. While the top part of the case and the caseback have a natural stainless steel finish, the middle section has been given a scratch-resistant PVD treatment. Sticking out of the side of the case at the 3 o’clock location is a screw-down winding crown that has a flattened onion shape with the tip adorned by a polished enamel Bremont logo. A domed anti-reflective sapphire crystal protects the dial side of the watch, while a screw-on caseback fitted with a secondary sapphire crystal covers the reverse side of the case and helps provide the watch with 100 meters of water resistance. 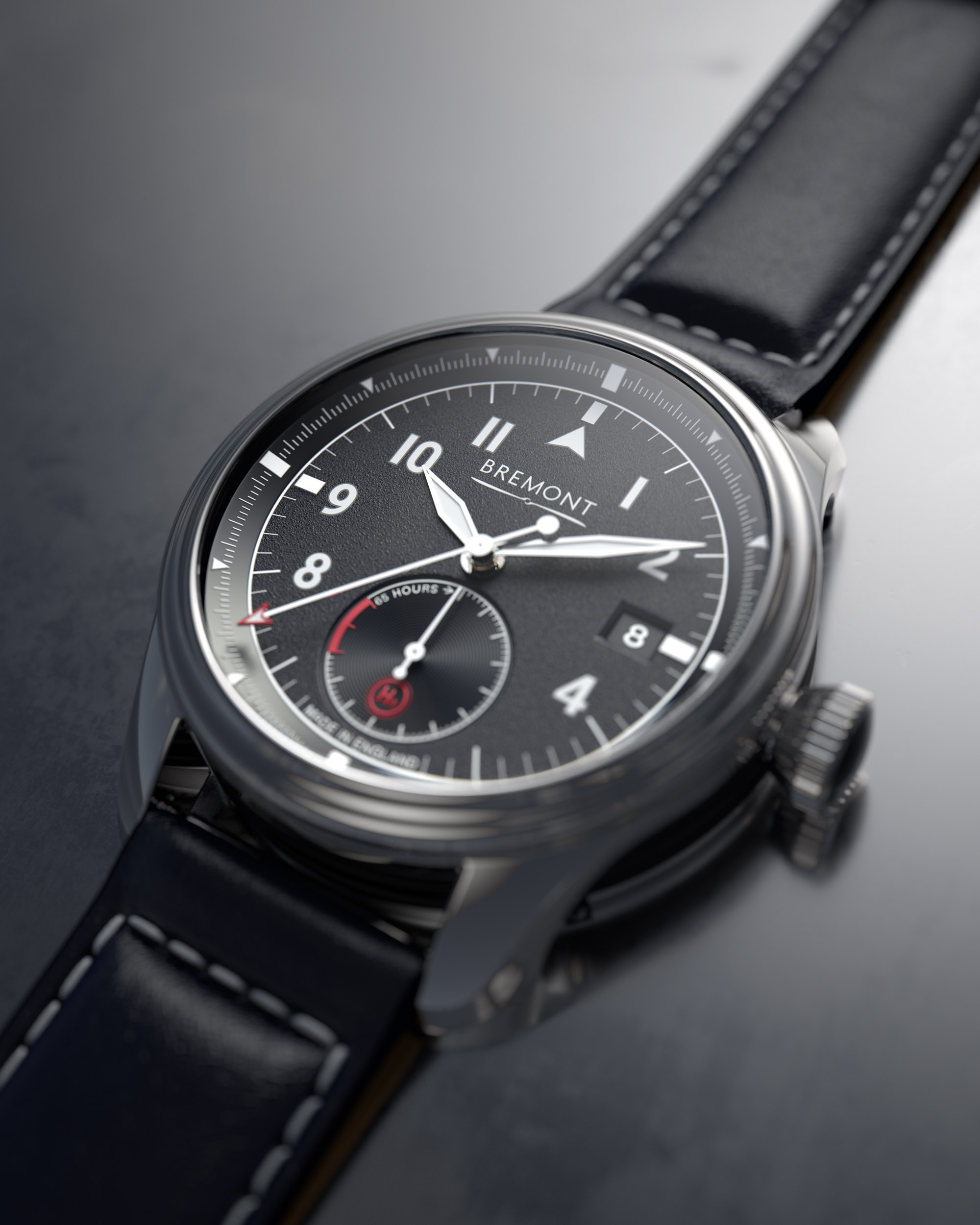 Available with either a black or dark blue dial, both versions of the Bremont Fury come fitted with a pin buckle leather strap that is color matched to the surface of the dial. Despite their different colorways, both dials feature an identical design and layout that reportedly took Bremont more than two years to refine and develop. The surface of the dial features a granular matte texture that contrasts against the subtle azurage pattern of the power reserve indicator register. Large Arabic numerals with a triangle at the 12 o’clock location serve as the hour makers, while a date window resides at the 3 o’clock location, and a pair of dagger-shaped hands displays the time, along with an arrow-tipped seconds hand. Just as you would expect from a pilot’s watch that might find use inside a dimly lit cockpit, all three of the hands, plus the cardinal point hour markers and the five-minute markings within the minute track are all finished with blue glowing Super-LumiNova to aid with low-light legibility. Additionally, while both models largely feature crisp white markings, both versions feature small pops of red within the power reserve indicator in the dial, along with on the arrow-shaped tip of the centrally-mounted seconds hand. 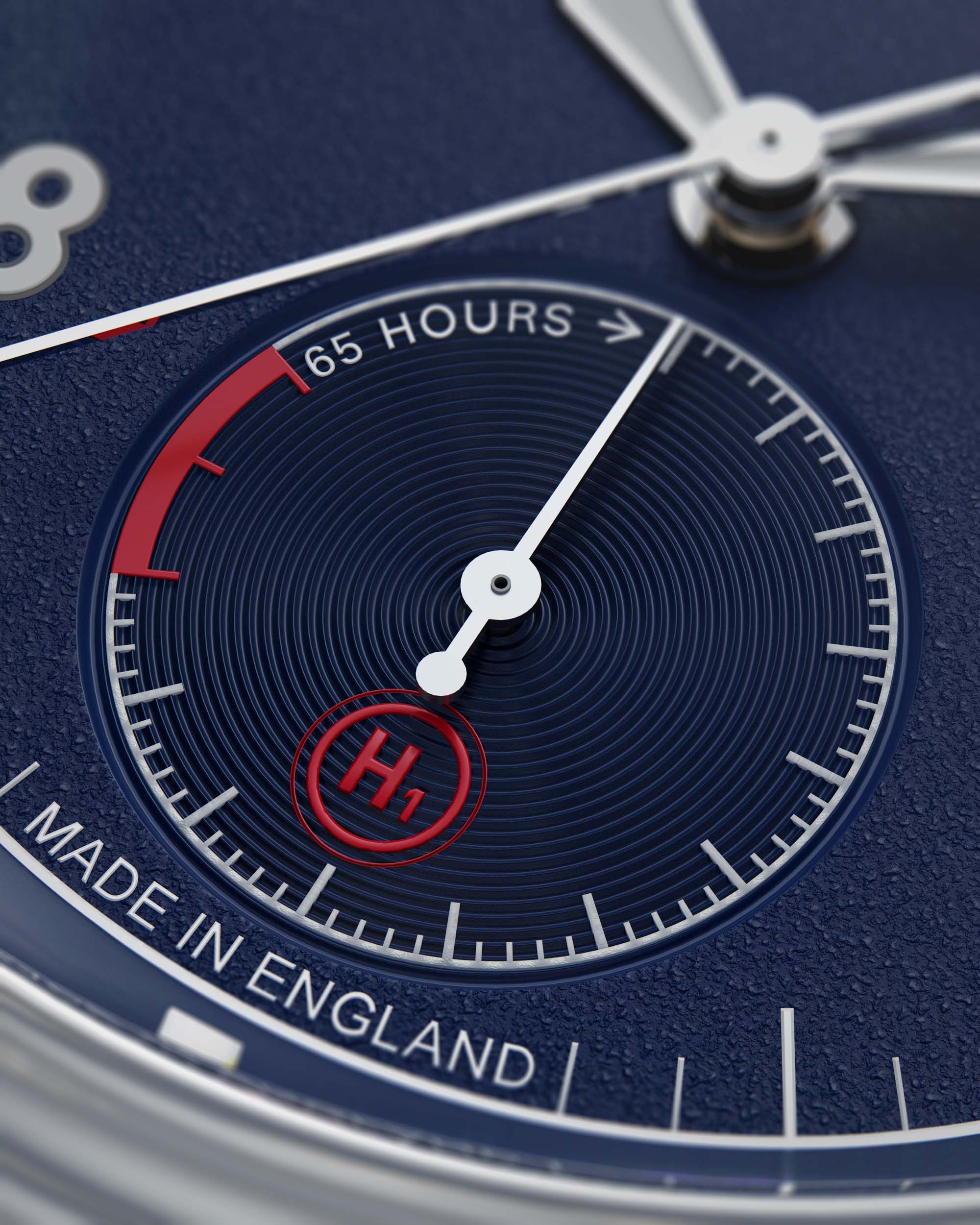 An equally significant aspect of this launch is that the Bremont Fury will be powered by the Bremont-manufactured Caliber ENG365 automatic movement, which is produced by the brand from within its 35,000 square foot England-based manufacturing and technology center known as “The Wing.” Bremont has been committed to reviving British watchmaking, and while the brand’s ENG300 series of movements debuted last year in 2021 powering a limited edition model, the Bremont Fury is one of a trio of new watches that represent the first standard-production pieces from the brand to feature one of its own calibers. Regarding the actual specs of the Bremont ENG365, the automatic winding movement features a silicon escape wheel plus a free-sprung balance spring, and it runs at a frequency of 25,200vph (3.5Hz), while offering users a power reserve of approximately 65 hours. Like all of the ENG300 series movements, the ENG365 inside the Bremont Fury is tested using the brand’s H1 Timing Standard, which is directly comparable to the ISO3159:2009 Chronometer tests. In addition to proudly displaying the H1 text in red within the power reserve indicator on its dial, the Bremont Fury also shows off its ENG365 movement’s gold-plated automatic bridge and solid tungsten skeletonized rotor through its sapphire display caseback. 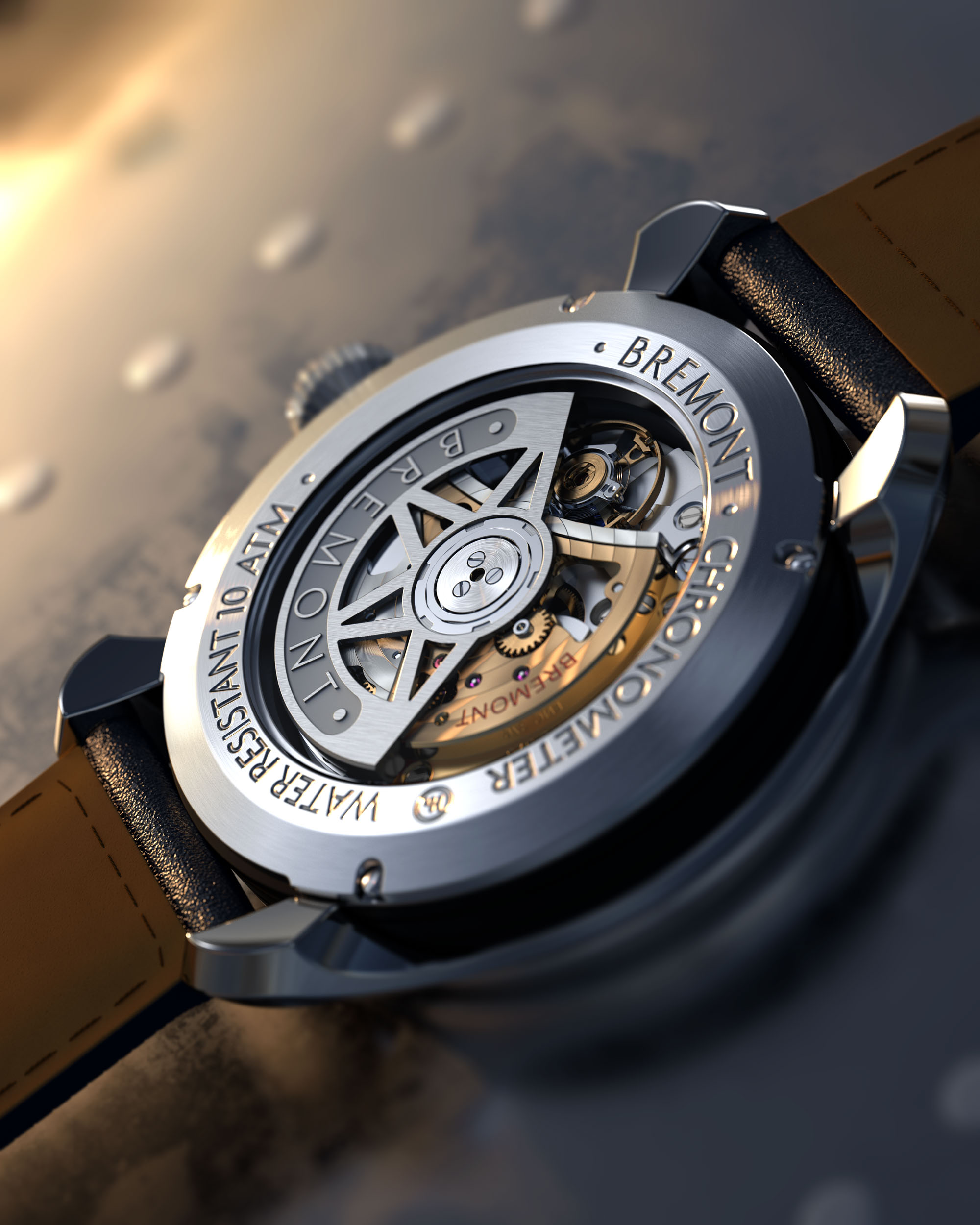 Representing a fresh take on the classic pilot’s watch, the Bremont Fury expands the brand’s lineup of existing aviation-inspired models and it represents a new generation of timepieces that are powered by Bremont-manufactured movements. Accompanied by an official retail price of $6,795 USD, the Bremont Fury is undeniably quite a bit more expensive than similar three-handed pilot’s watches that exist within the brand’s lineup. However, it’s important to remember that these new models use one of Bremont’s ENG300 series movements instead of a standard third-party design, so rather than this just being an instance of a brand boldly attempting to move up market, the difference in price is largely due to the significantly different production costs associated with the two watches. Additionally, despite being more expensive than the standard ETA/Sellita models, these new Bremont Fury watches are significantly more affordable than the very first limited edition releases to feature the brand’s own movements, and given that Bremont is committed to bringing watchmaking back to the UK, it seems likely that we will continue to see more watches with Bremont-manufactured movements in the future. For more information, please visit the brand’s website.