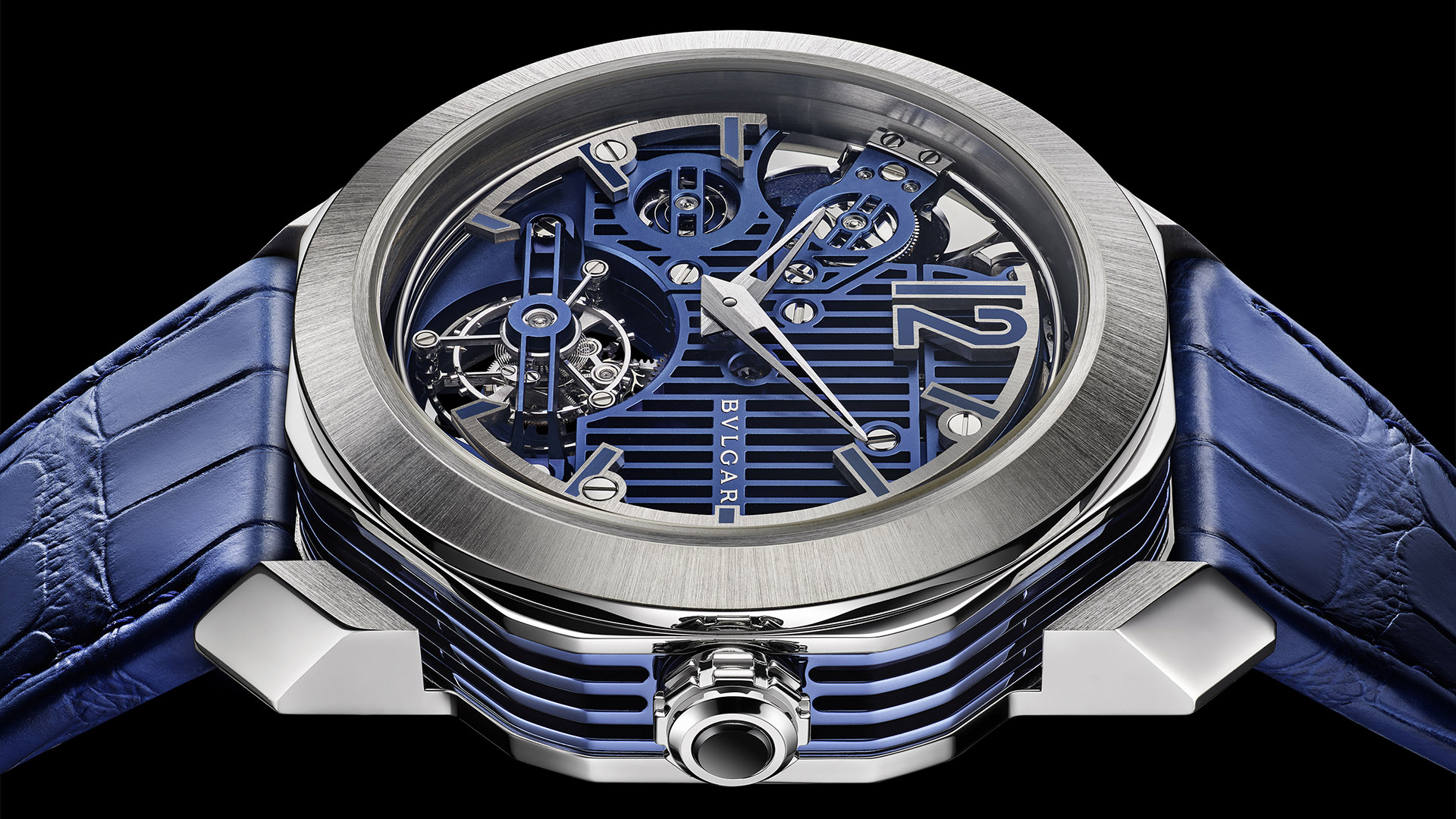 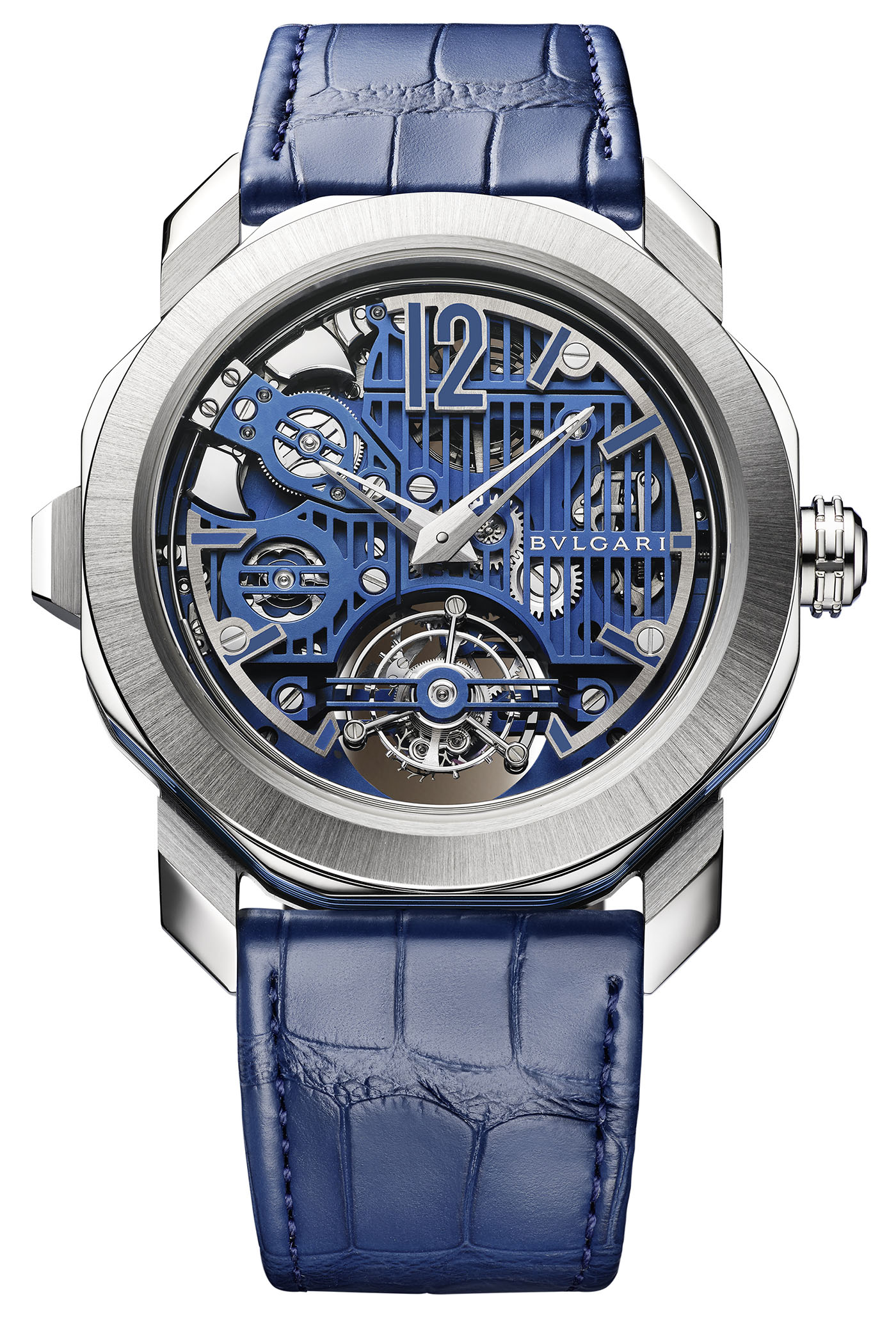 Both the tourbillon escapement and the minute repeater rank as some of the most prestigious and intricate complications in the horological pantheon, and any brand able to develop one of these ornate elements in-house earns a sizeable reputation for watchmaking prowess. An in-house design that contains both of these complications, then, is a genuine piece of mechanical spectacle. The 2021 release of the Bulgari Octo Roma Carillon Tourbillon was a prime example of this, taking an ultra-modern approach to a miniature repeater tourbillon design based on the brand’s fan-favorite Octo platform. For LVMH Watch Week 2022, Bulgari returns to this high-end concept with a softer, more luxe colorway. The new limited-edition Bulgari Octo Roma Blue Carillon Tourbillon brings a richer, more layered character to this complex design without sacrificing the ultra-modern edge that made the original model so striking. 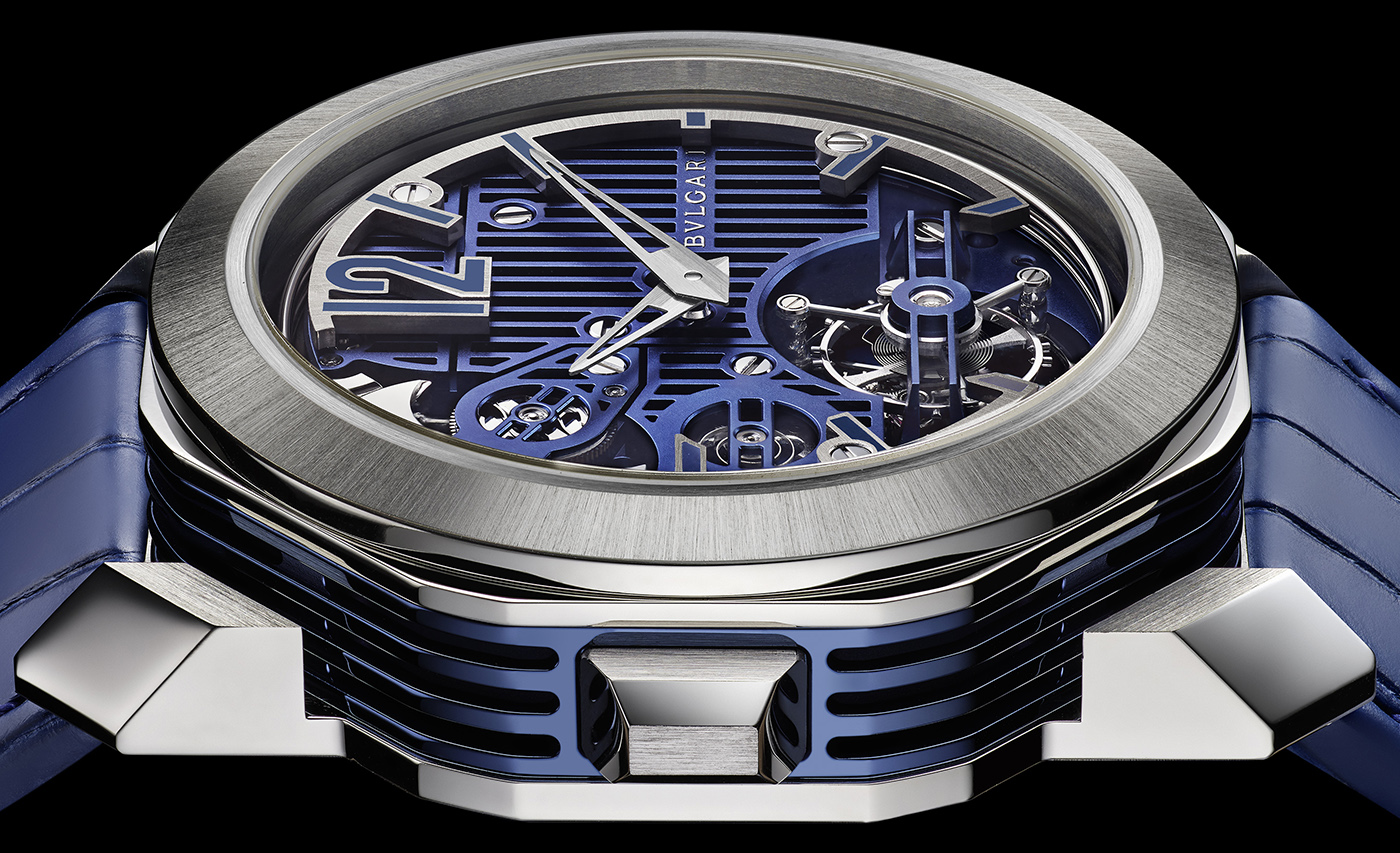 Measuring in at 44mm-wide and 12.83mm-thick, the Bulgari Octo Roma Blue Carillon Tourbillon’s case adapts the brand’s cornerstone Octo Roma case design into a complex acoustic instrument. The familiar angular chamfered lugs and ornate two-layered bezel assembly are rendered in brushed and polished platinum, providing a bright and luxurious base for the design in initial images. From here, Bulgari extensively reworks the mid-case of the Octo Roma with a series of slots running the circumference of the watch. Beyond giving the case a greater sense of depth and visually breaking up the case side profile, this slotted blue coated titanium ring acts as an amplifier for the minute repeater chime, allowing the sound to carry louder and more clearly. Bulgari adds a third metal to the mix for the trapezoidal 9 o’clock minute repeater activation pusher, giving this tactile element a more upscale feel in white gold. The 3 o’clock crown also features a matching white gold treatment, topped with a cabochon in black ceramic. The platinum caseback adds further sound-enhancing grooves to the case design, which also serve to frame the sapphire display window handsomely in initial images. As one might expect from a case filled with slotted openings, water-resistance for the Octo Roma Blue Carillon Tourbillon is low at 30 meters. That said, this is far from a sporting design. 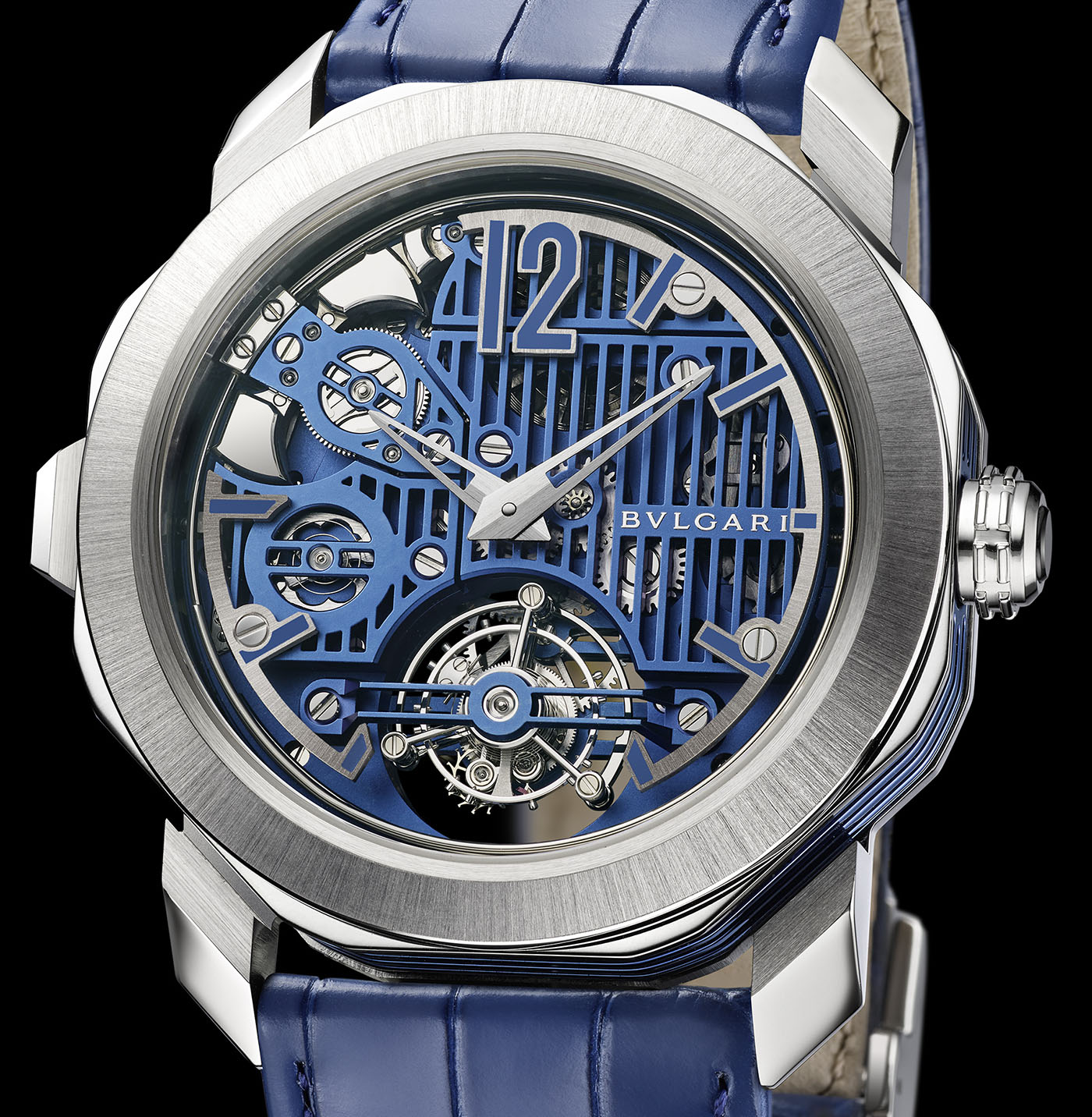 As with the case, the skeleton dial of the Bulgari Octo Roma Blue Carillon Tourbillon brings a sharp, modernist visual style to its pair of classical complications. Rich ocean blue vacuum-coated titanium bridges continue the motif of the mid-case and take up the majority of the visual real estate here. This lends the design a pleasingly cohesive look and strikes a solid midpoint between dial legibility and a view of the movement below. Rather than using individual indices, Bulgari aims to simplify an already complex dial layout by condensing its hour markers down to a pair of brushed partial outer rings attached to the blued bridges below by prominent screws. Whether this solution appears streamlined or unfinished and industrial will come down to personal preference, but the oversized Arabic numerals at 12 o’clock do nicely counterbalance the 6 o’clock tourbillon in initial images. Timekeeping functions are handled by a set of skeletonized dauphine hands in a matching brushed finish. Through cutaways in the bridges and the outer chapter ring, however, Bulgari keeps the visual focus on the Octo Roma Blue Carillon Tourbillon’s two namesake complications at 6 o’clock and 10 o’clock. Thanks to a lightweight skeleton bridge in matching blue and a pared-back cage, the 6 o’clock tourbillon offers a nearly unimpeded view of the oscillating escapement. At 10 o’clock, Bulgari frames the hammers of the minute repeater with a cutaway bridge, which should give wearers a chance to see the full workings of the chime in action. To simplify the look and ensure a clear sound, Bulgari connects the gongs for this minute repeater directly to the sides of the case and stacks them vertically around the perimeter of the movement for a low-profile appearance in images. 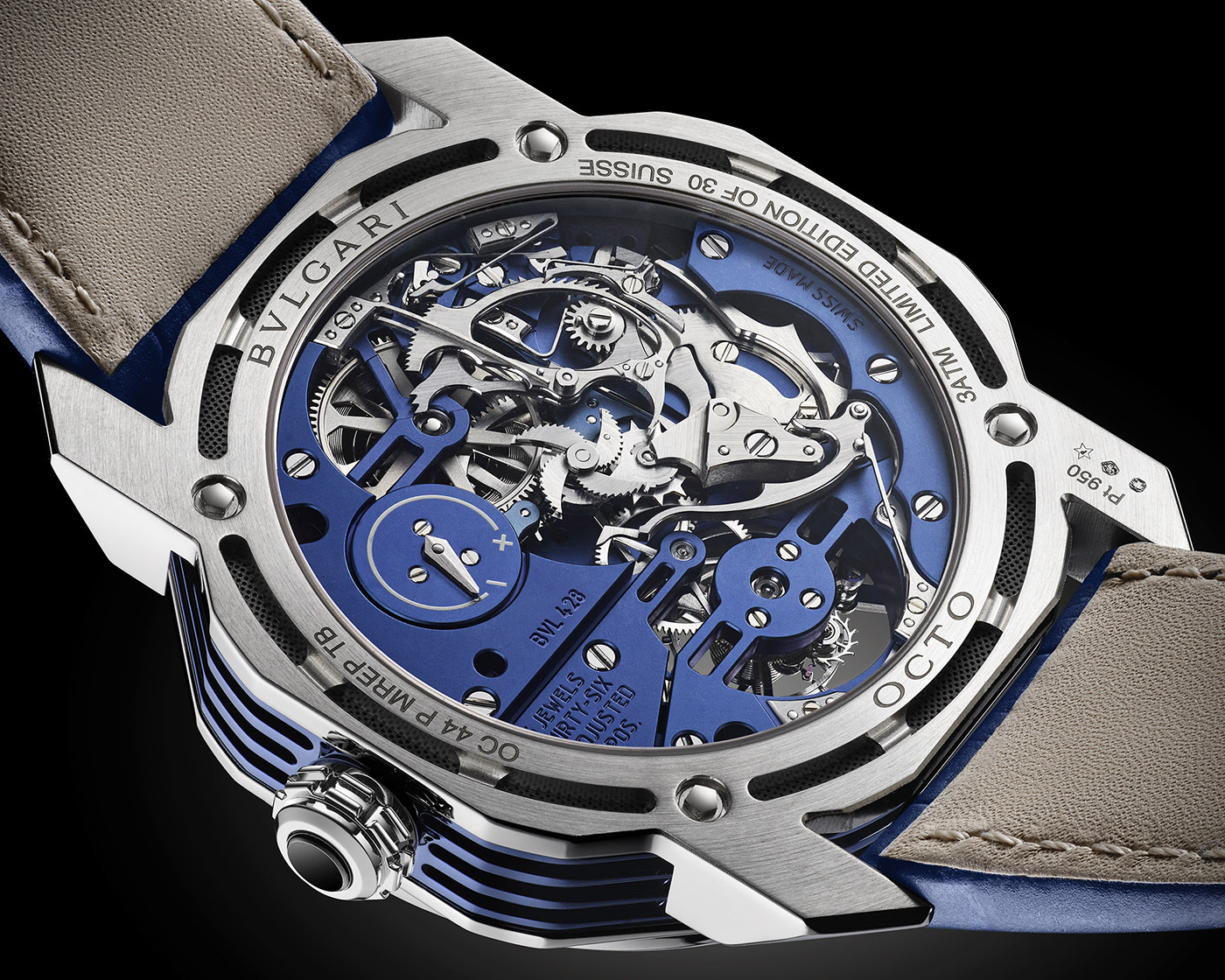 Inside the Bulgari Octo Roma Blue Carillon Tourbillon beats the in-house BVL428 hand-wound minute repeater tourbillon movement. Rather than the slotted design of the dial side, the blued bridges visible through the caseback are solid and broad, flanking a web of brighter brushed ratchets, wheels, and levers connected to the minute repeater complication. The widest of these bridges also includes a small circular power reserve indicator with a cleanly minimal scale. The power reserve itself for the BVL428 is an impressive 75 hours, with a steady 21,600 bph beat rate. Bulgari completes the look with a classic matte navy blue alligator leather strap on a platinum butterfly deployant clasp.

With a pair of ornate complications coupled to a deeper, more luxurious colorway, the limited-edition Bulgari Octo Roma Blue Carillon Tourbillon is a striking and refined showcase of the brand’s high-end horological prowess. Only 30 examples of the Bulgari Octo Rom Blue Carillon Tourbillon will be made, and the watch is available now through authorized dealers. MSRP for this model is stated at $317,000 as of press time. For more details, please visit the brand’s website.