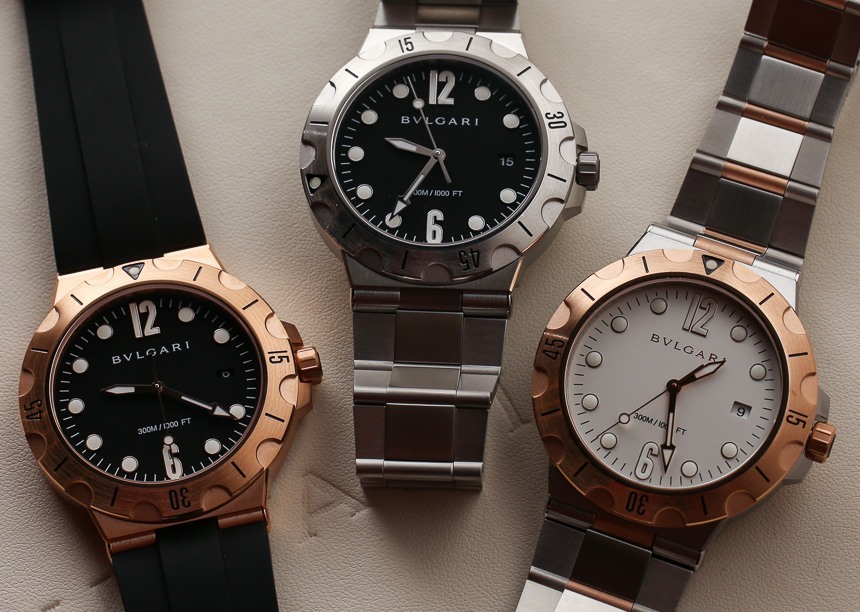 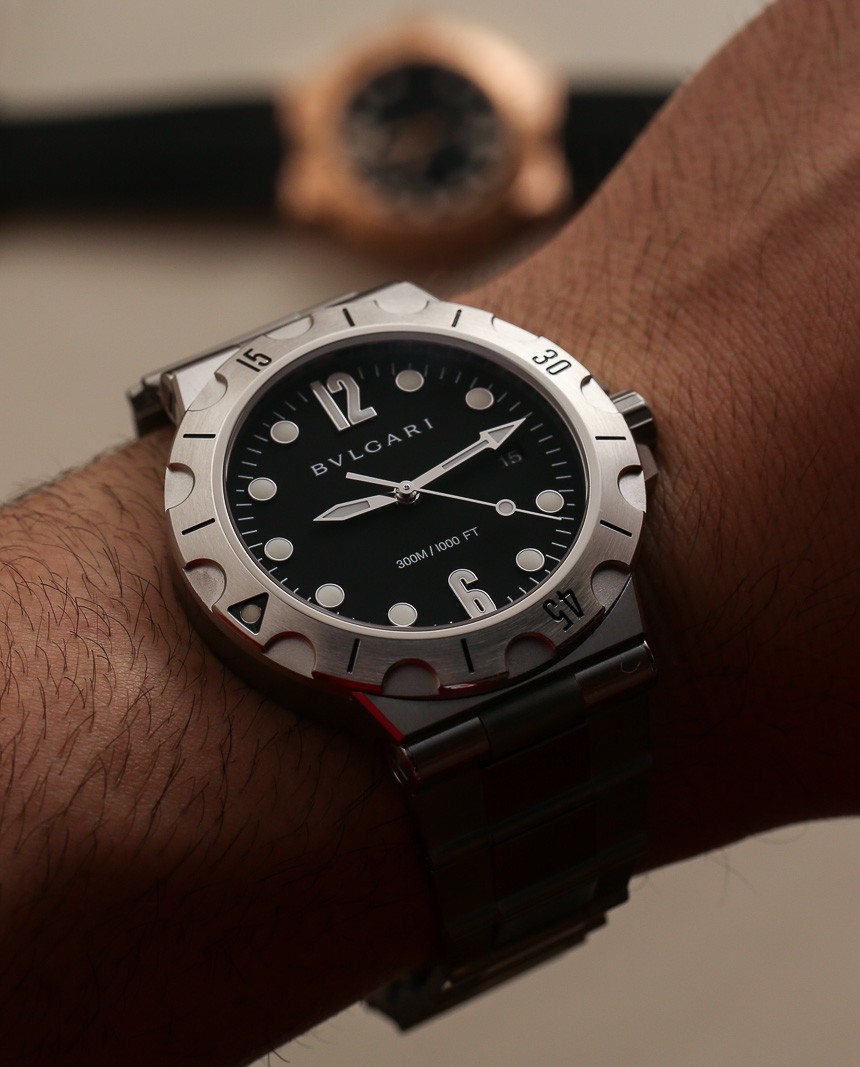 Bulgari’s dive watch makes a welcome comeback for 2015 with the Bulgari Diagono Scuba collection. Bulgari timepieces are products I like a lot, and if their design theme melds with your tastes (as it does mine), there is a lot to like about these Swiss-Made Italian-designed luxury watches. For 2015, the Bulgari Diagono diver is back with extra durability and a more refined style – that is very much still in the long-standing and highly successful Bulgari Diagono collection. What watch lovers will really enjoy is the quality, comfort, style, and legibility of these fashionable dive timepieces.

Bulgari Diagono timepieces are a relatively popular luxury watch collection that I see people wearing out and about in the real world. With that said, hardcore watch guys don’t always seem to give Bulgari the credit it deserves. I can understand, perhaps, why, given the larger image of the Bulgari brand. Know of their hotels, lifestyle products, and jewelry… you don’t always think of Bulgari as a men’s watch brand. If you’ve been reading our coverage of Bulgari watches over the last few years, you’ll notice that Bulgari not only has a slew of very formidable ultra-high-complication timepieces, but also some excellent daily-wear watches with just enough added style and refinement to help them stand out from the crowd. 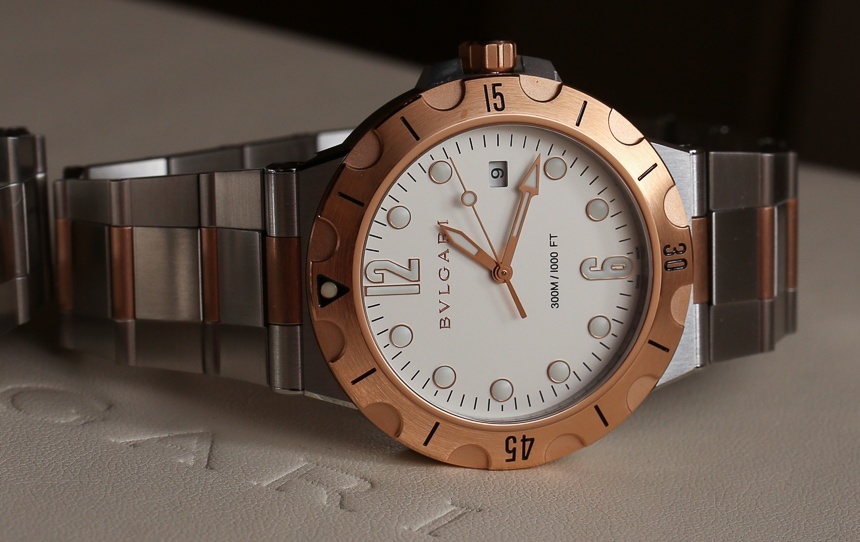 For 2015, the Bulgari Diagono Scuba comes in a few versions that include both steel and 18k pink gold models, as well as two-tone steel and gold models. There are black and white dial options, and of course either a rubber strap or a Diagono-style metal bracelet. If want you to go full “tool watch” model then the all steel Bulgari Diagono Scuba with the black dial on the bracelet is the way to go. That’s my choice of model.

The most apparent thing for me when looking at the dial of the Bulgari Diagono Scuba is how much more refined it is that most of the outgoing Diagono dive watches from the last several years. Buglari really refined the dial by removing rather than adding elements – something that purists will enjoy. With that said, the look of the dial is still very much in the Bulgari Diagono diver family. Notice the little things like the relative lack of text on the dial, the simple hour markers and hands, and overall very toned-down demeanor. In my opinion, Bulgari really got this dial right, and it feels very much in line with the refined classicism of something like the Rolex Submariner.

The same sense of refinement extends to the rotating diver’s bezel which again has fewer markers on it. The design of the bezel is traditionally Diagono, and Bulgari has made sure that it isn’t too thick. Compare the bezel with older models which not only have more markers on them, but also are much thicker. Perhaps the strict utility of the Bulgari Diagono Scuba has been reduced a bit, but the elegance quotient is much higher… and at the end of the day, style and elegance is what sells luxury dive watches (not strict functionality). 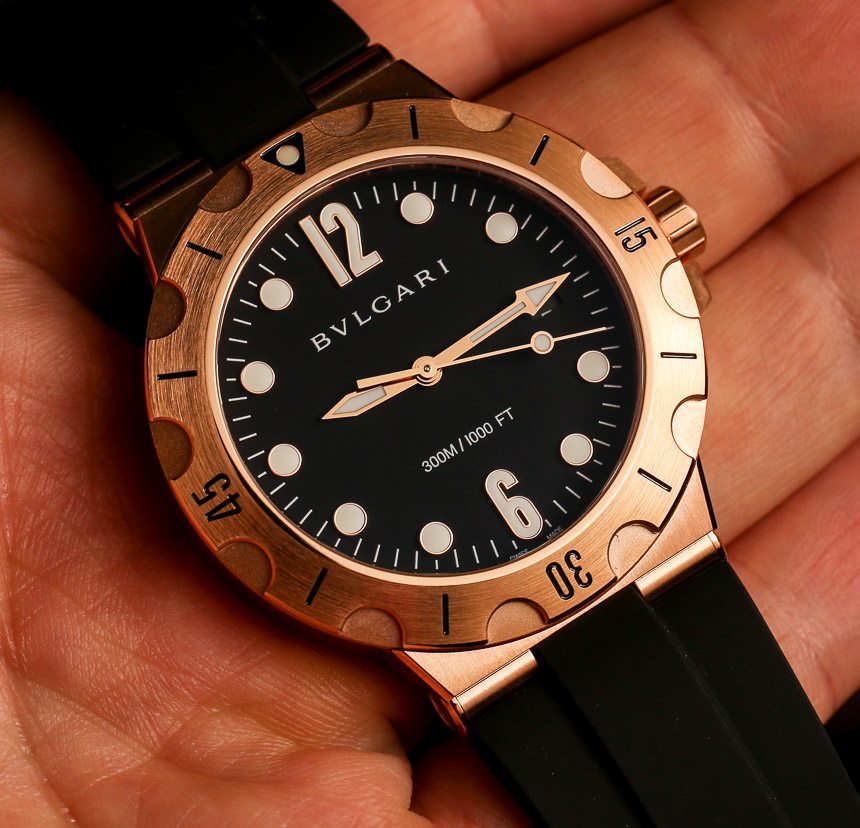 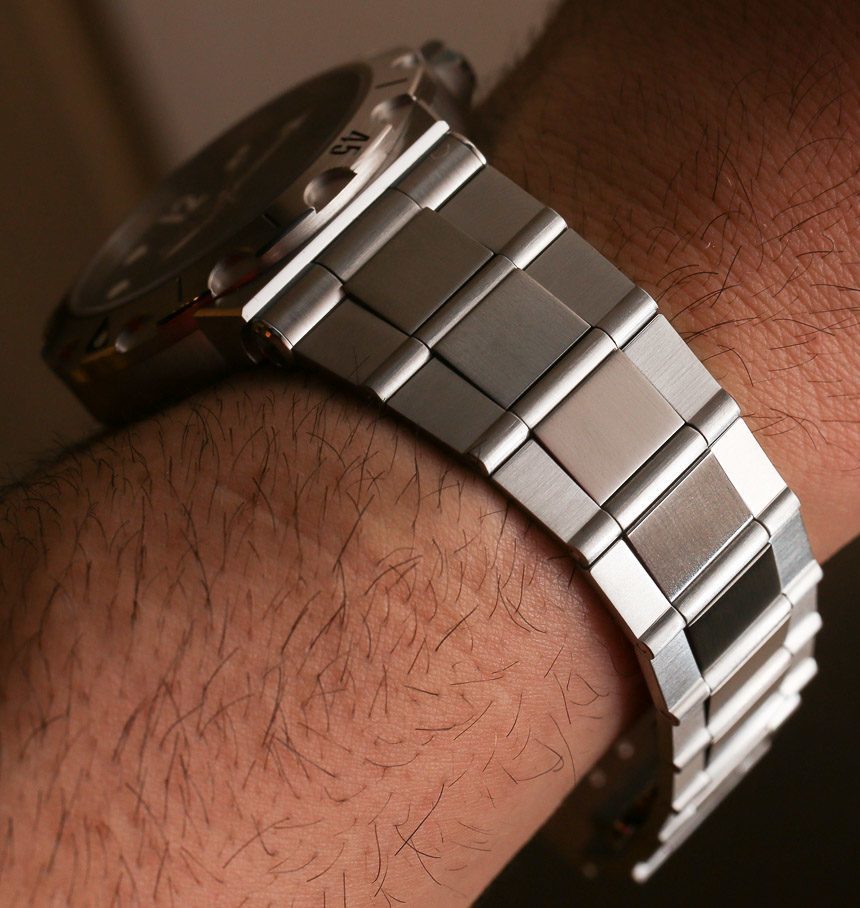 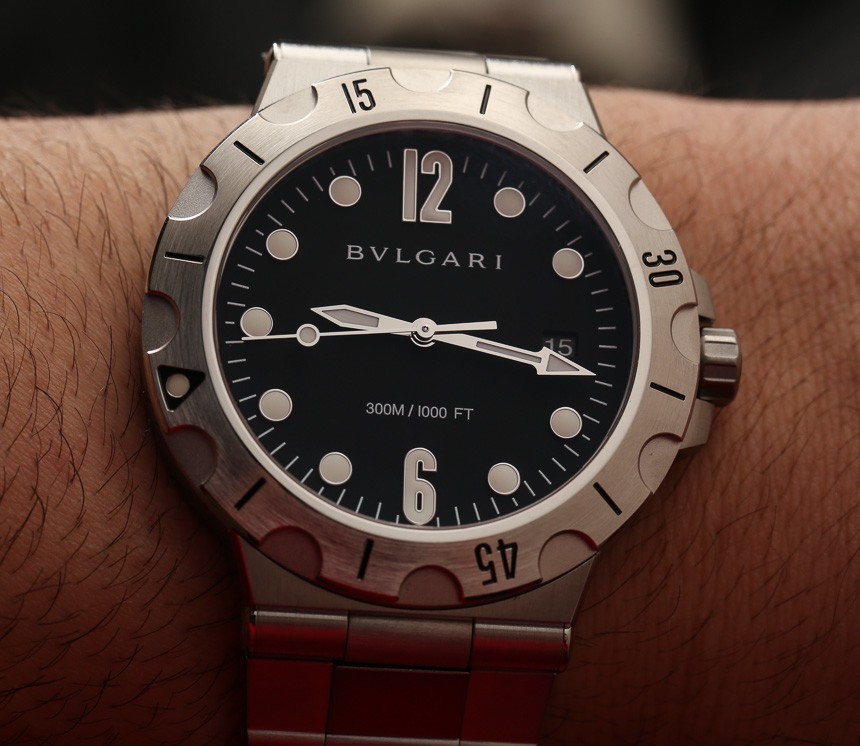 The Buglari Diagono Scuba watch case is 41mm wide and, of course, has an AR-coated sapphire crystal. The luminant looks pretty decent, as well, on the hands and hour markers. Like all Diagono cases, the Bulgari Diagono Scuba wears really comfortably, and the lug system makes the case fit nicely on most all wrists. The lugs use an articulating pivot point which extends to each of the links in the bracelet. It’s a cool system that makes for a lot of wearing comfort as well as style. With that said, the design of the Bulgari Diagono Scuba bracelet isn’t for everyone, because Bulgari has always gone for a very specific aesthetic theme which doesn’t try to appeal to everyone. As I stated above, I am a fan of the Diagono family’s aesthetic, but if you aren’t, I can understand that. 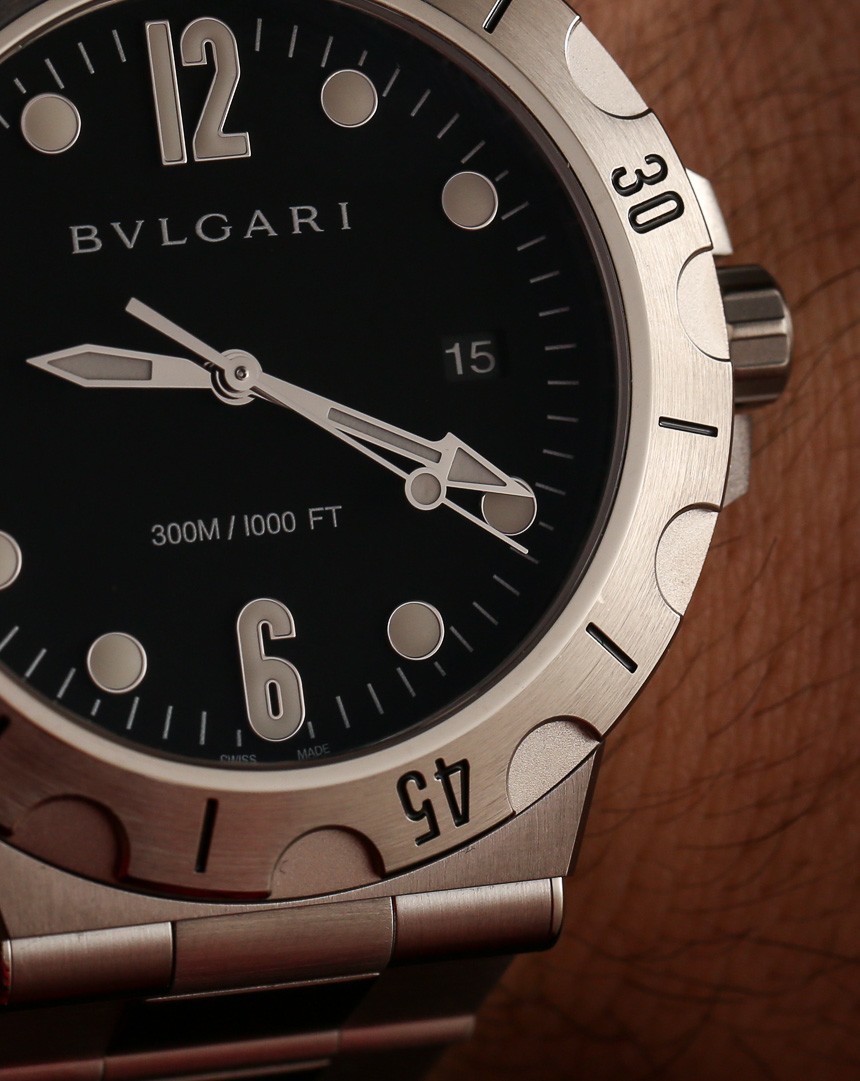 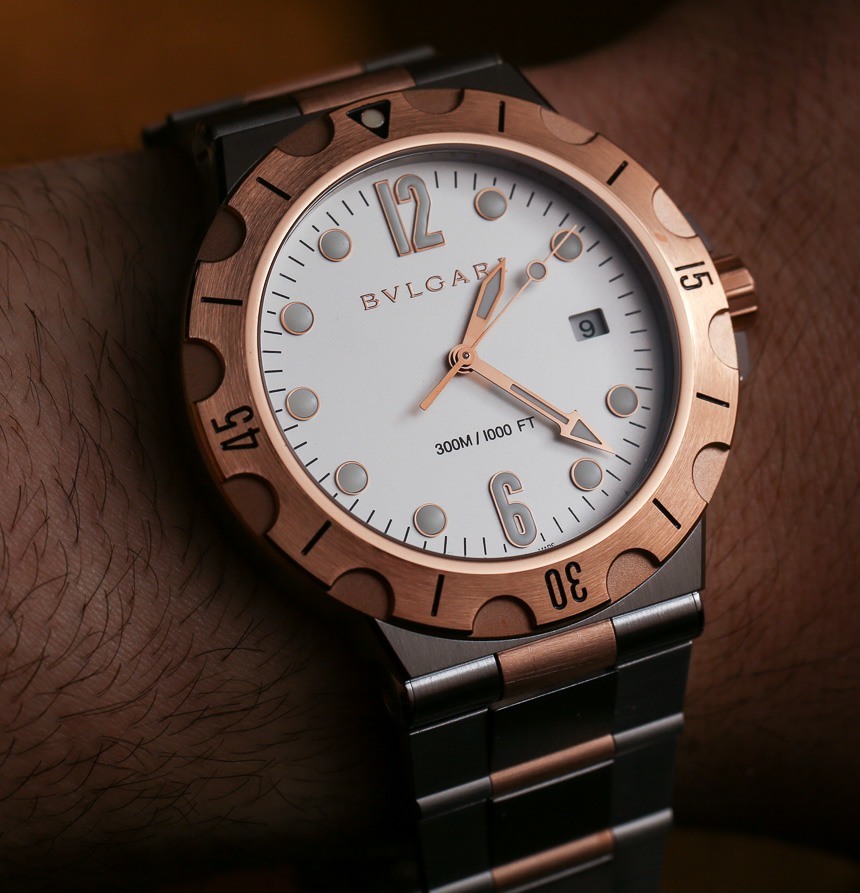 With the two-tone 18k pink gold and steel Bulgari Diagono Scuba with the white dial, Bulgari is going after a more lifestyle audience with a handsome, more mature looking timepiece. The case is thin enough to slip under a sleeve but the overall look and feel of the watch is still very sporty and summery. While I like the dial a lot on this version, the bare-bones style of the date window doesn’t look as appropriate here as it does on the black dialed version. I feel as though some type of frame (or something similar) around the date window might have been a good idea. 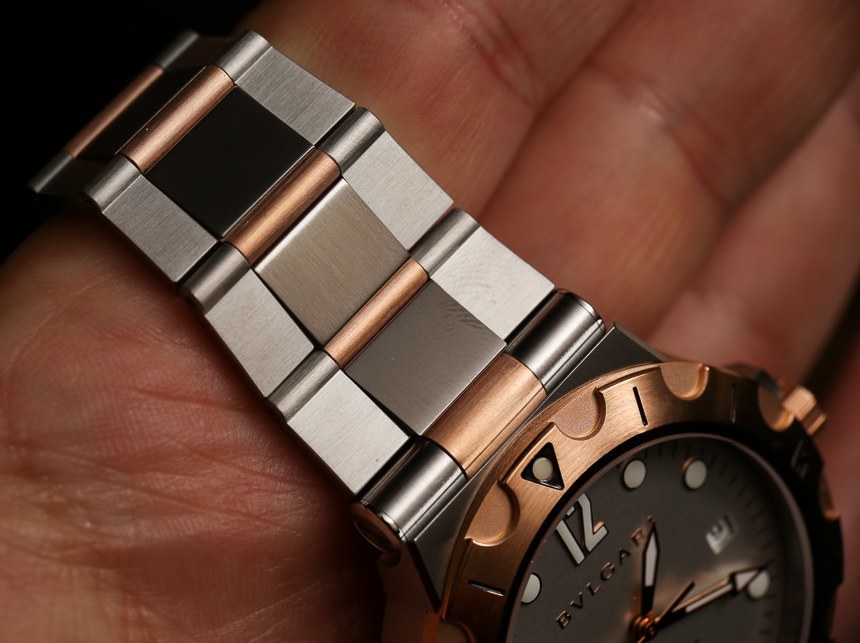 Topping off the 2015 Bulgari Diagono Scuba watch collection is the all 18k pink gold model on the rubber strap with the black dial. The entire concept of a solid gold sports watch on a rubber (or rubber-style – and I am, of course, speaking of the also new-for-2015 Rolex Yacht-Master gold and ceramic watch) strap is not at all uncommon, but it nevertheless is something that doesn’t always sit well with some people. Sporty but clearly a luxury item? Meant to take a beating but something to be coddled? There is just so much inherent conflict in the concept of a sports watch in gold that it can cause cognitive dissonance. Who chooses these watches, and why? I suppose at the end of the day, gold sports watches are one of those “F- you” items that says, “of course I don’t need a gold sports watch, and I certainly shouldn’t be using it for sports purposes… but I am, because I can.” So the attitude of wearing a gold sports watch is what can really ruin gold sports watches. It just doesn’t always suggest the type of behavior your friends and family can rally behind and be proud of all the time. At the same time, most people – if given the opportunity – would gladly don a gold sports watch without hesitation. 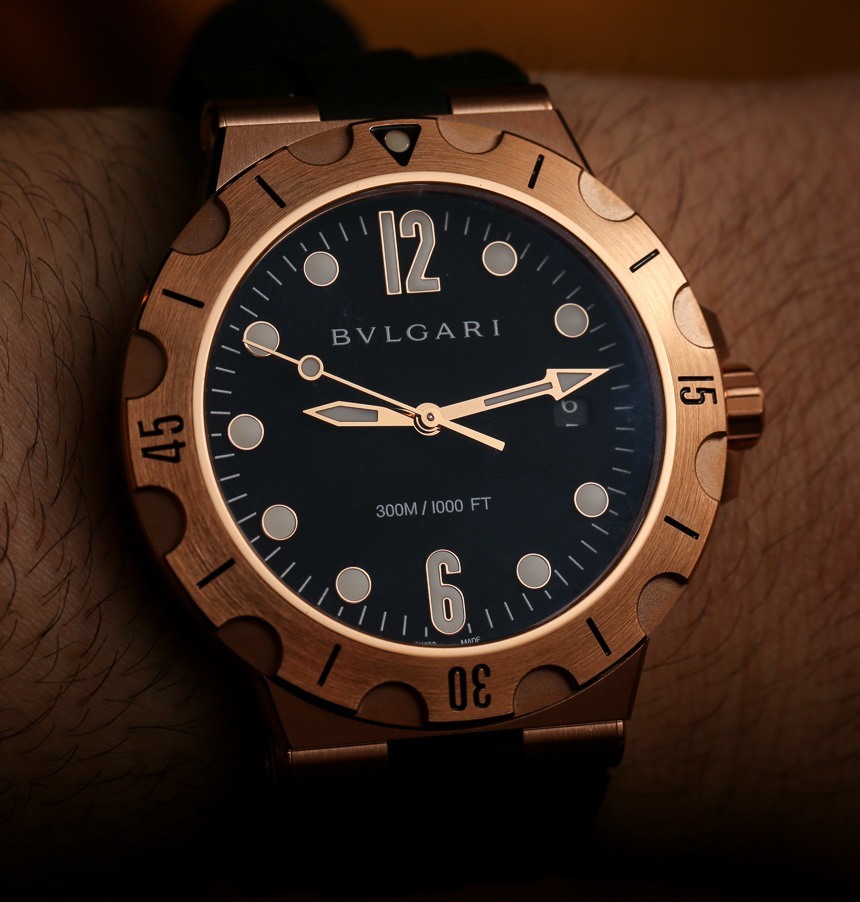 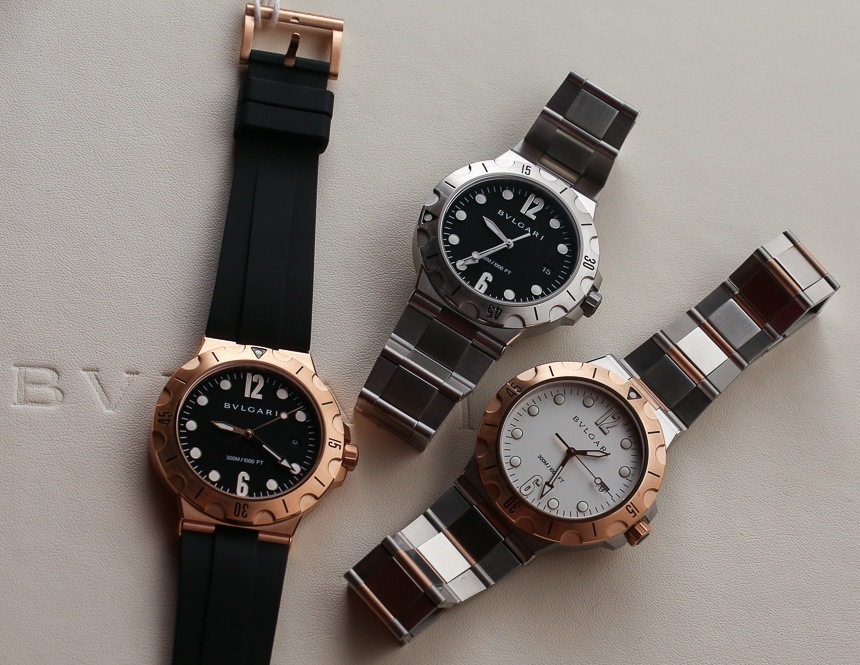 What is also new for the 2015 Bulgari Diagono Scuba watches is the movement. Bulgari now uses their in-house made caliber BVL 191 automatic movement which operates at 4Hz and isn’t really that much different than the base Swiss ETA Diagono models once used. It’s funny, because using in-house made movements gives brands a lot more street cred, but oftentimes, simple time and date automatic movements like this aren’t going to be much different if they are in-house made by the brand or sourced from a supplier like ETA.

I like the style and comfort of the new Bulgari Diagono Scuba watch, and for diving watch fans, there is a new reason to check out the Italian (Swiss) watch maker again. If you like a comfortable, solid design with a bit of a twist, the Bulgari has your back. Prices for the Bulgari Diagono Scuba are 5,700 Euros in steel on the rubber strap, 6,200 Euros in steel on the steel bracelet, 9,950 Euros in two-tone steel and 18k pink gold on the bracelet, and 21,000 Euros in solid 18k rose gold on the rubber strap. bulgari.com