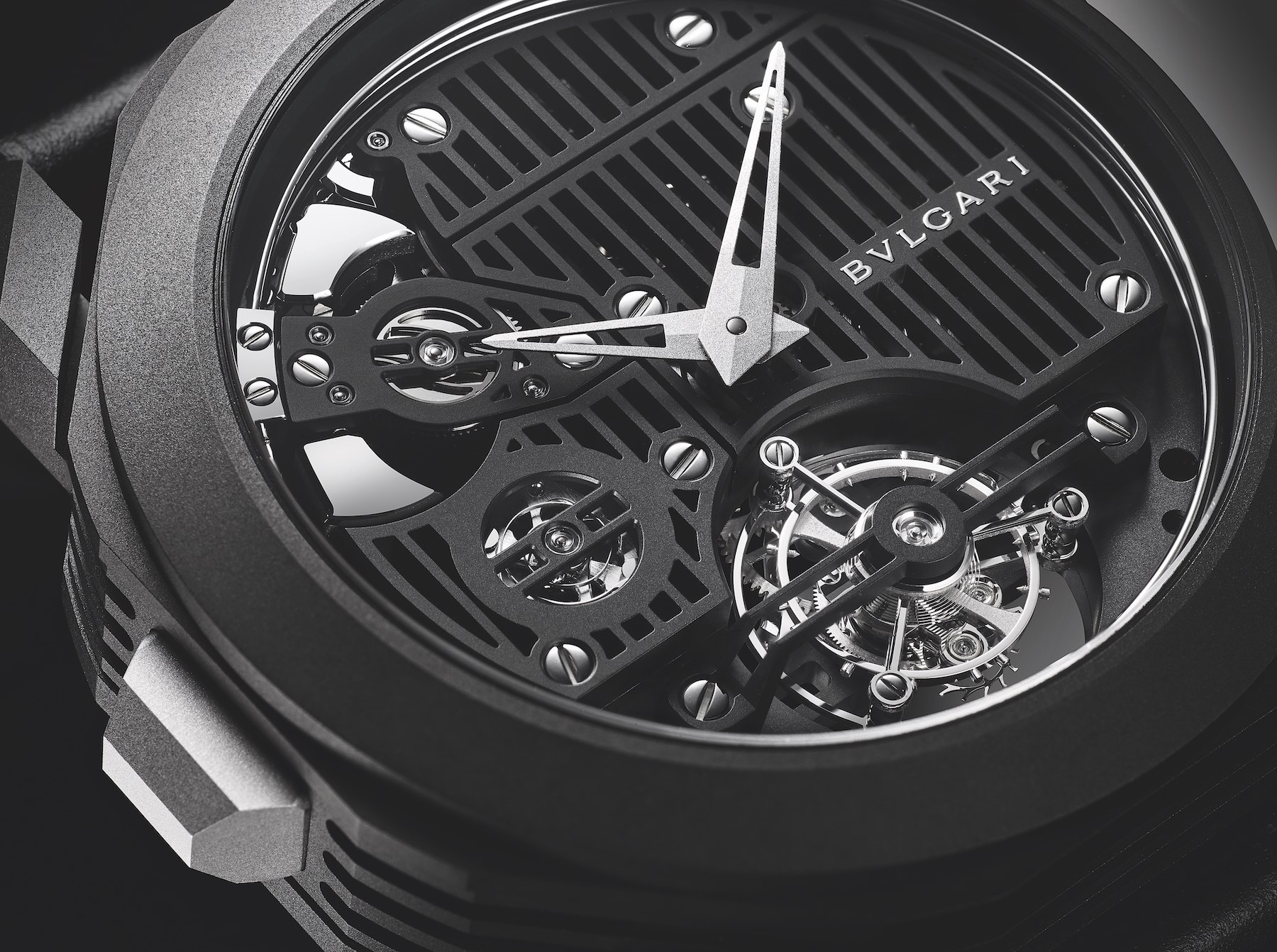 Just released as part of LVMH Watch Week 2021 is the Bulgari Octo Roma Carillon Tourbillon, the latest haute horlogerie halo piece demonstrating the brand playing at the absolute top levels of watchmaking. And this one isn’t nearly as complicated as its 1,200+ component Grande Sonnerie pieces, either. The Octo Roma Carillon Tourbillon does take a decidedly contemporary design turn with not just a black DLC-coated titanium case but a new movement with skeletonized bridges finished in black titanium, as well.

Two things I want to mention before continuing. First, once there’s a video of the chime in action, I’ll embed it here. Second, I am fairly certain these photos by Bulgari were edited in a way that removes some color, so just keep that in mind. 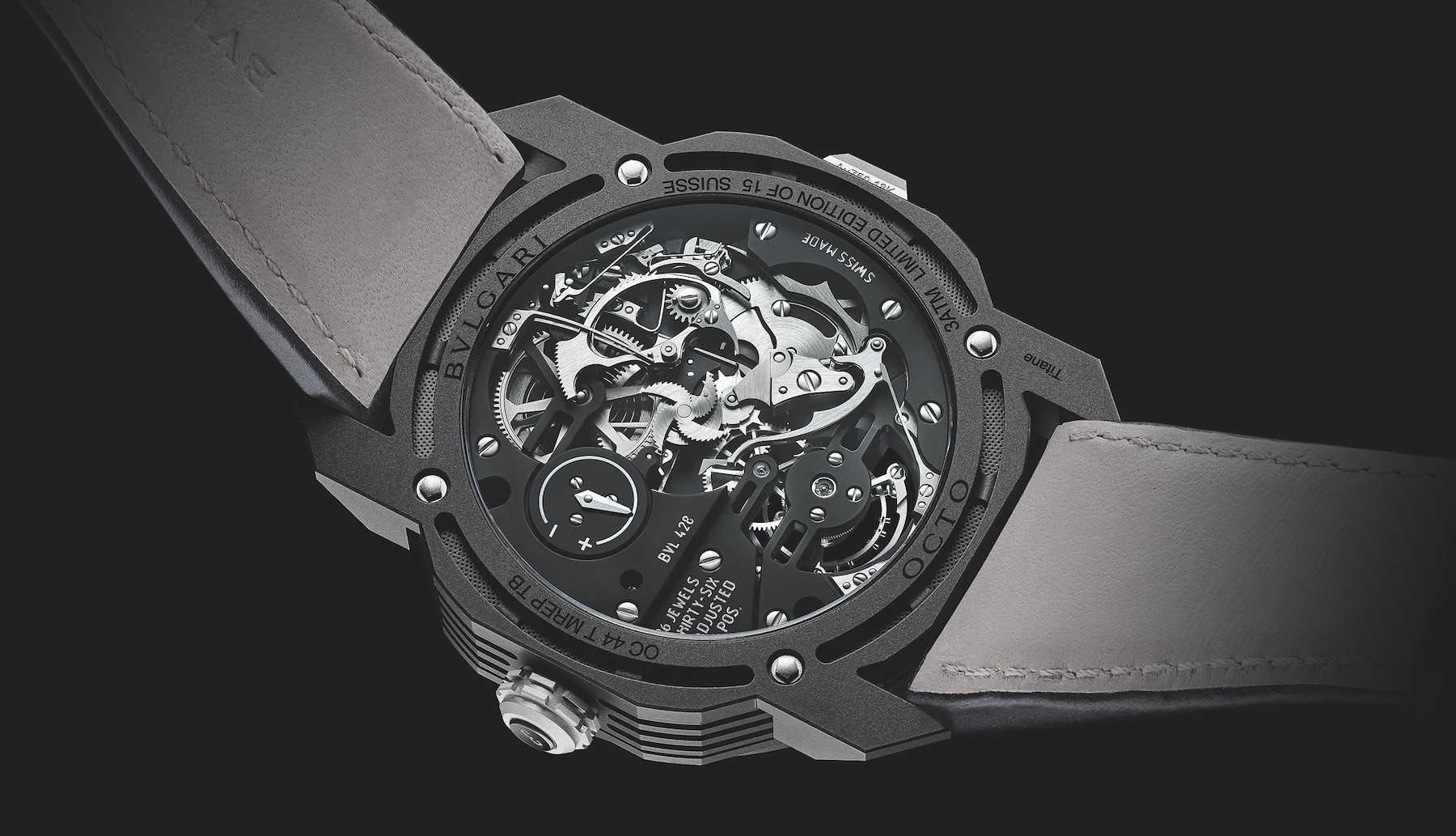 Unlike minute repeaters with two gongs, the Octa Roma Carillon Tourbillon uses three, which allows for a third higher note. If you’ll recall, the Bulgari Daniel Roth Carrillon Tourbillon Minute-Repeater had a similar setup albeit with the oblong-shaped Bulgari DR 3300 caliber. The new circular in-house manual-wind BVL 428 is composed of 432 parts (the DR 3300 was only 327, though I can’t for certain give a reason) and is no less impressive in this Octa Roma case. This new manual caliber measures 8.35mm-thick including two barrels, one dedicated to providing the 75-hour power reserve and one dedicated to the chiming mechanism and winds automatically when the chime is activated. 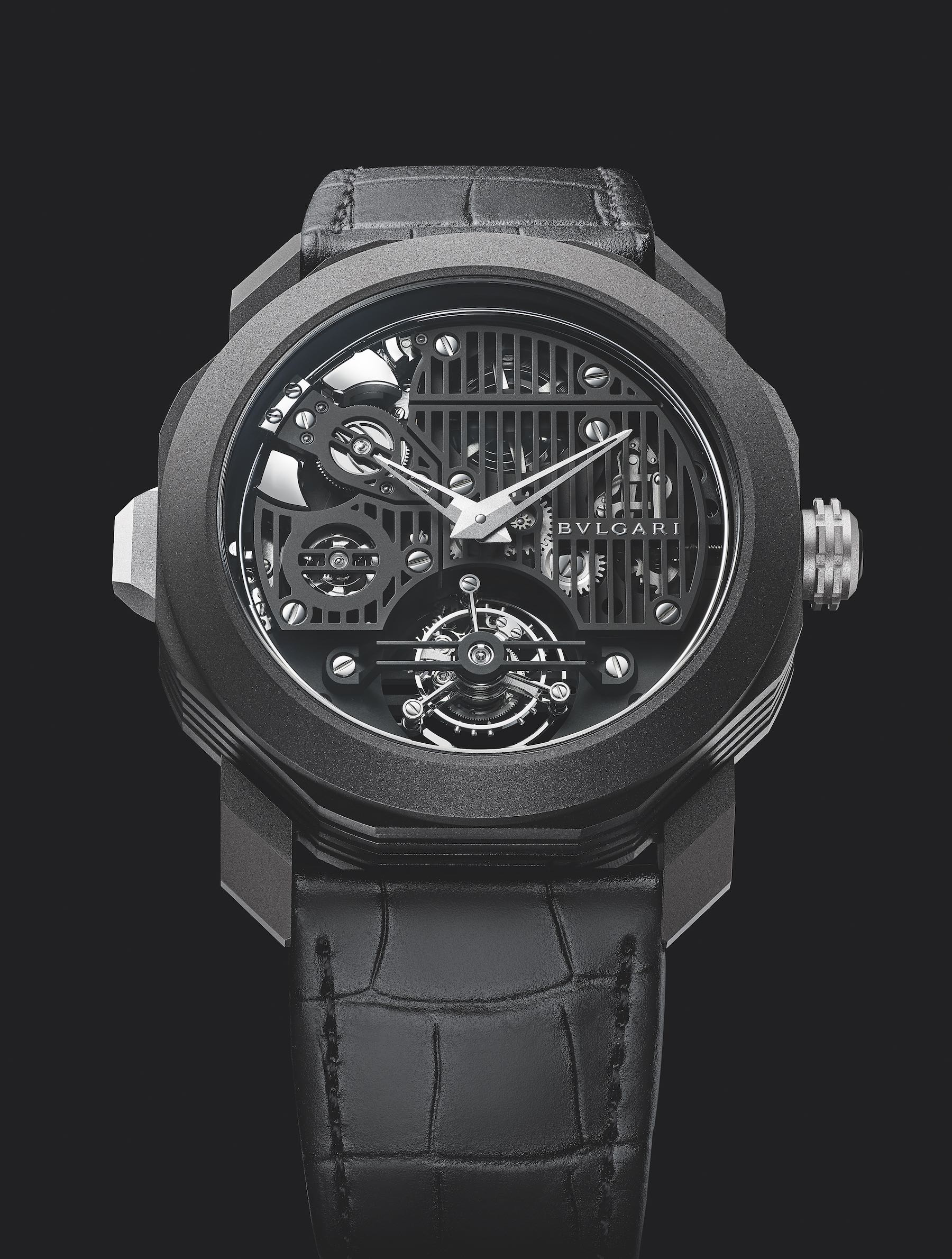 The gongs and hammers, Tourbillon cage, and “perforated surfaces” are done in alternating polished steel, with the mainplate and cut-out bridges treated with PVD. This is not your classic haute horlegerie finishing, and Bulgari clearly wanted nothing to do with “traditional” in the design and finish. 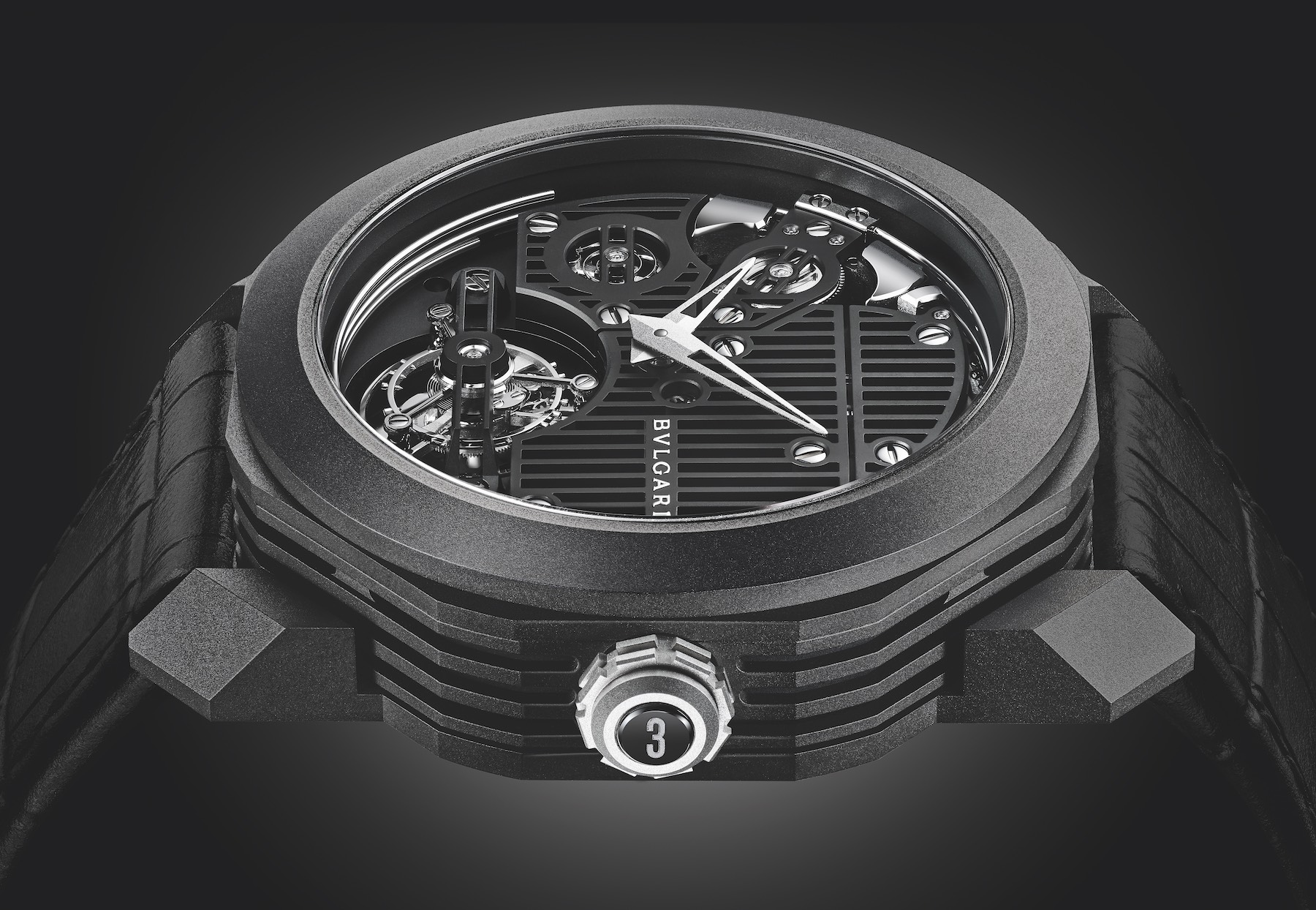 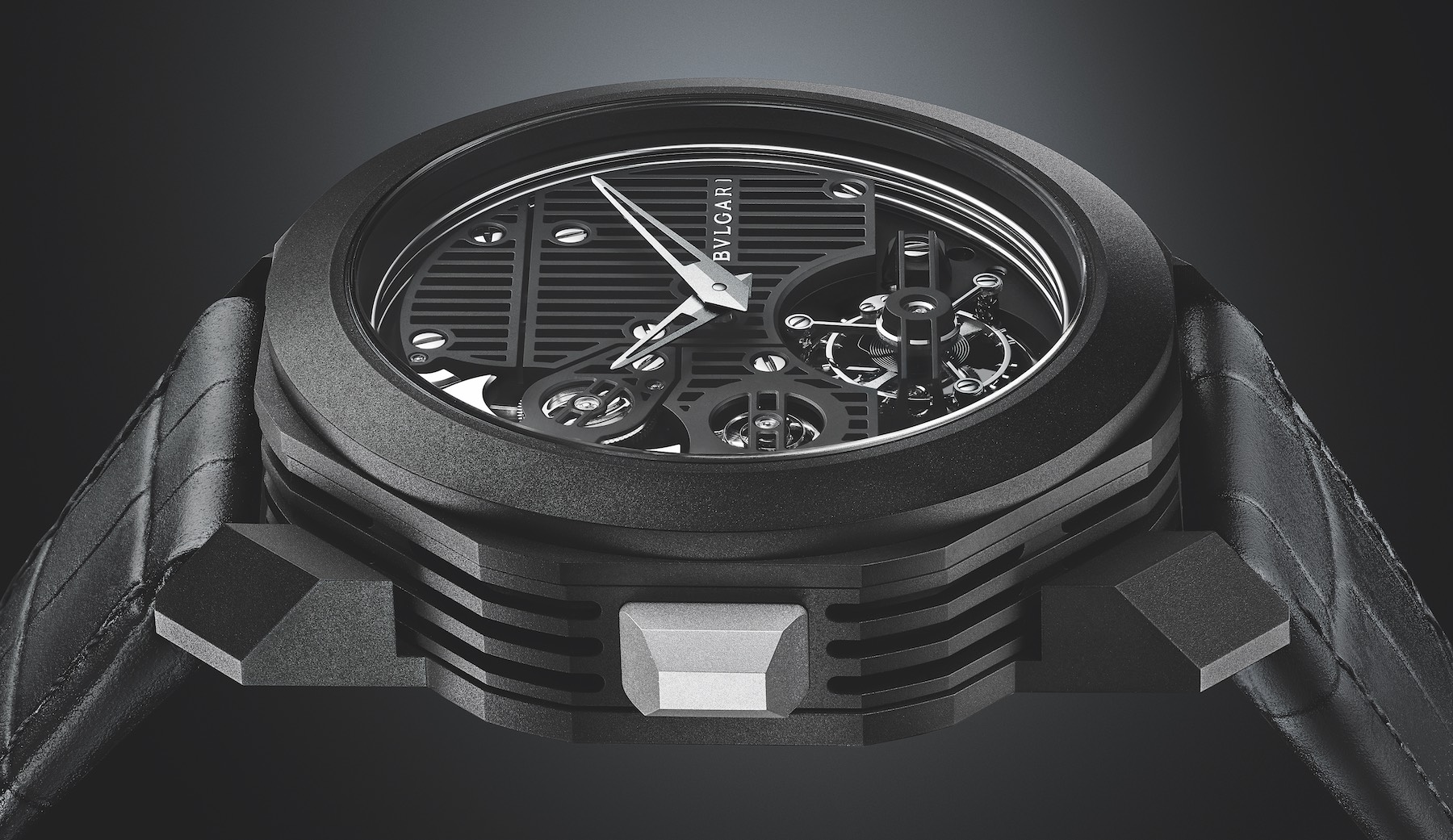 The chimes are fixed onto the body of the titanium case, which has as much metal shaved away as possible to allow the chiming to ring clearly from its three openings. The gongs are being folded and formed by hand, then hardened at 900 degrees, followed by cleaning and then ironing in a 500-degree oven (this gives them their “crystalline resonance,” in Bulgari’s words). Unlike a minute repeater that has low notes for hours and high notes for minutes, the three gongs here allows for the note C for hours,  mid-re-C in sequence for quarters, and mid-C for minutes. 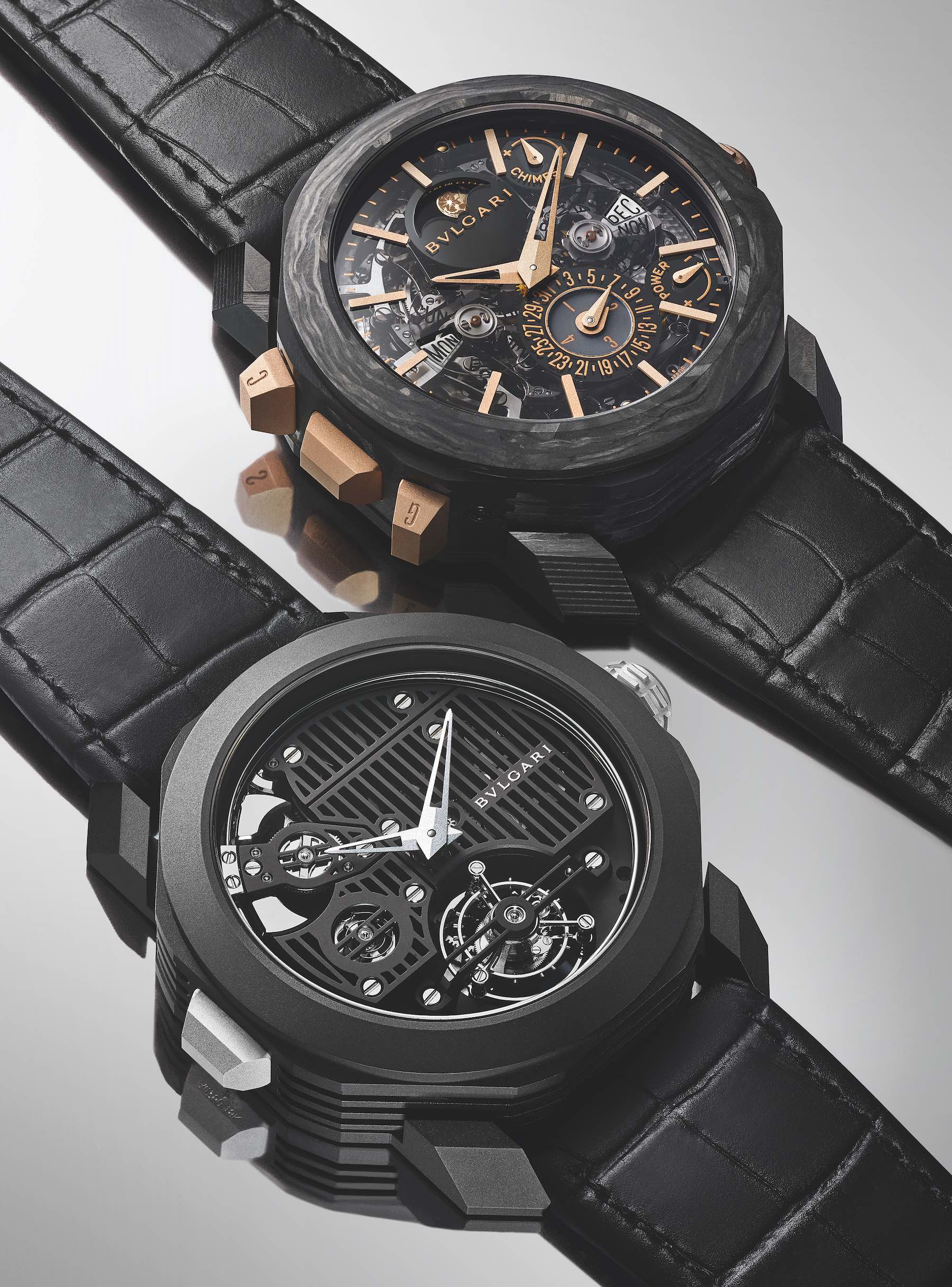 The matte-black DLC-coated titanium case measures 44mm-wide (case thickness yet to be confirmed) with an open-worked middle case that was designed to enhance the sound. You can see the gongs at the 10 o’clock position on the dial, with the third smaller gong for the higher pitches up top. Skeletonized hour and minute hands, and even the tourbillon bridge, are stark and also done in black DLC. Finally, the crown is done in white gold with a ceramic insert, and the chime pusher is also done in white gold. 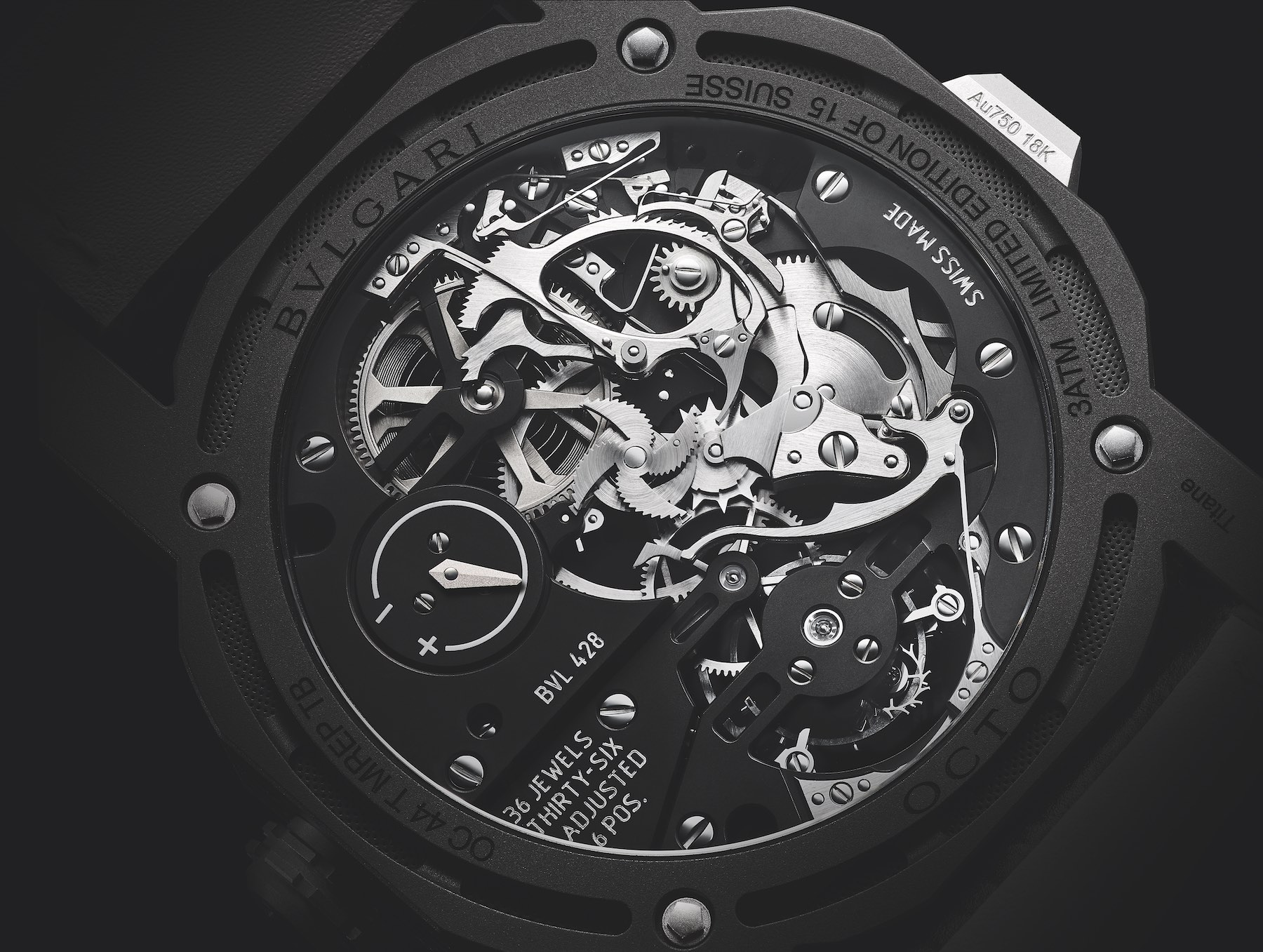 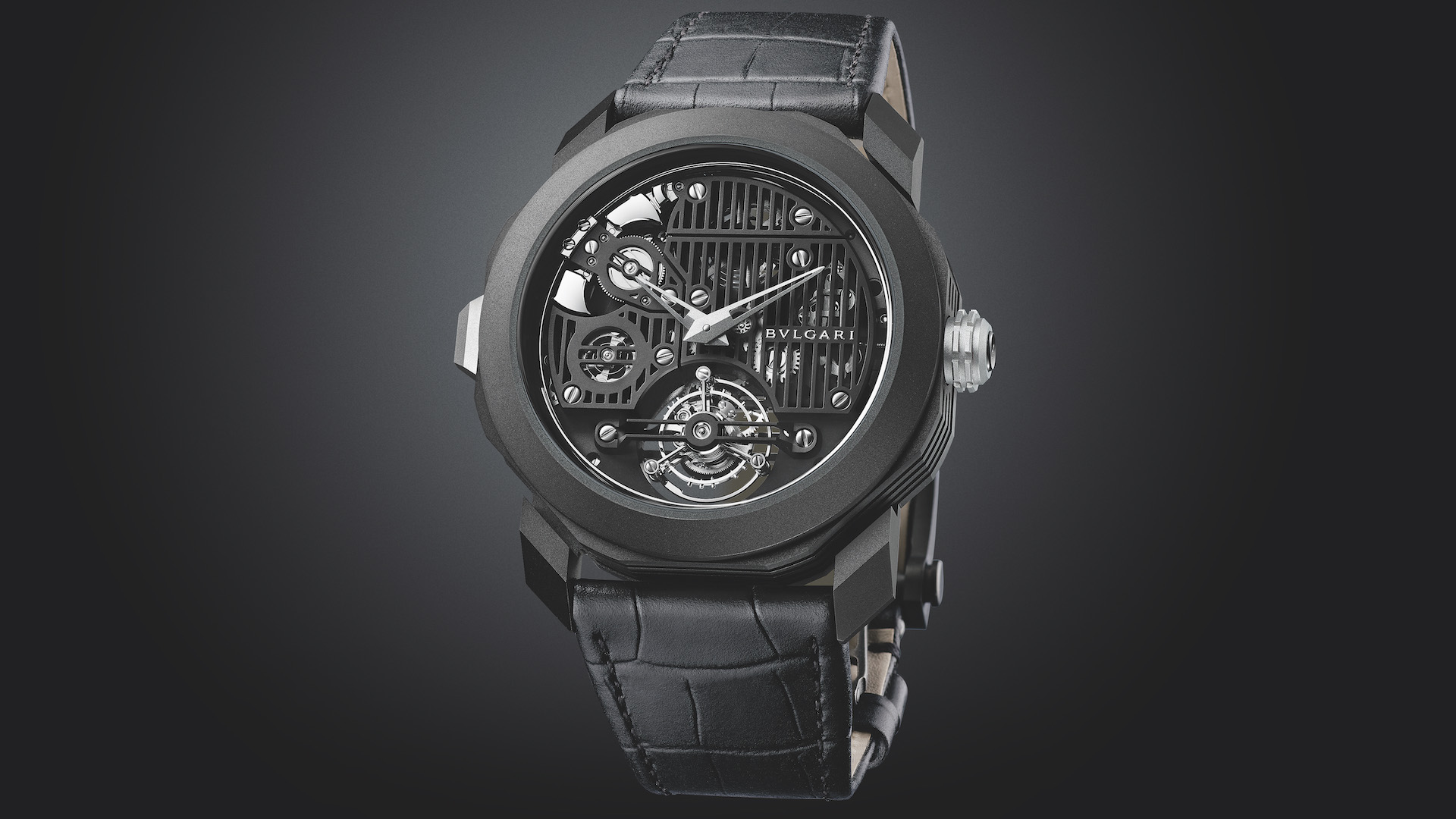 The Bulgari Octo Roma Carillon Tourbillon comes on a black rubberized alligator strap with a black DLC-coated titanium 3-blade folding buckle. Limited to 15 pieces, it is priced at CHF 255,000. You can learn more at bulgari.com.