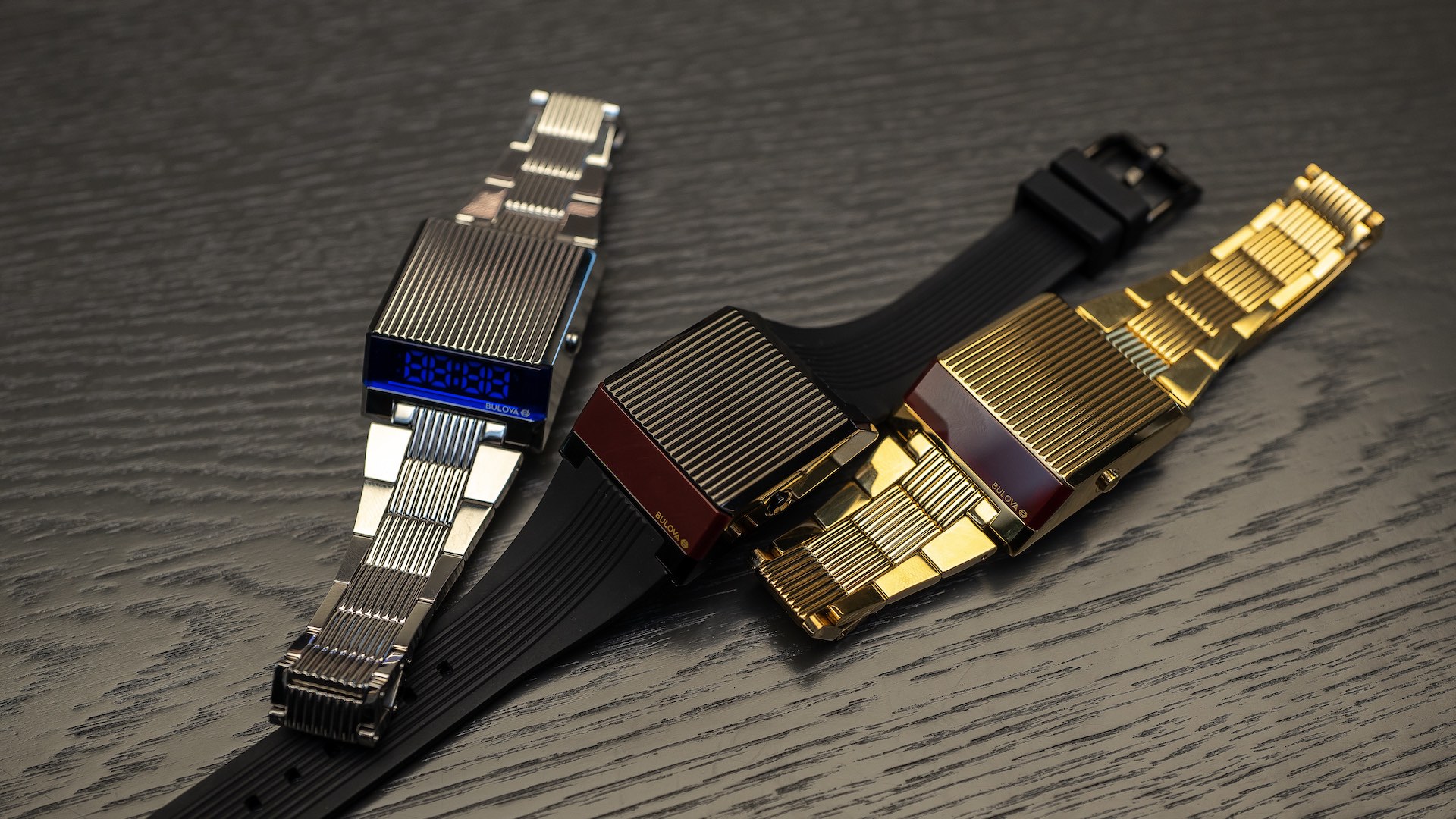 Reviving its memorable LED watches from the 1970s, the Bulova Computron LED watch collection is hard not to love. Anything “retro” is easy to do and even easier to screw up, but Bulova has knocked it out of the park with what might be my watch of the summer and overall favorite digital watch in quite some time. There are three varieties of the Bulova Computron LED as part of this inaugural run, though I wouldn’t be surprised by new watch colors, as well as new colors for the LED display. Available in a black, gold-tone, or a limited-run stainless steel with blue LED display, the Bulova Archive Computron LED watches start at $295 and go up to $395. 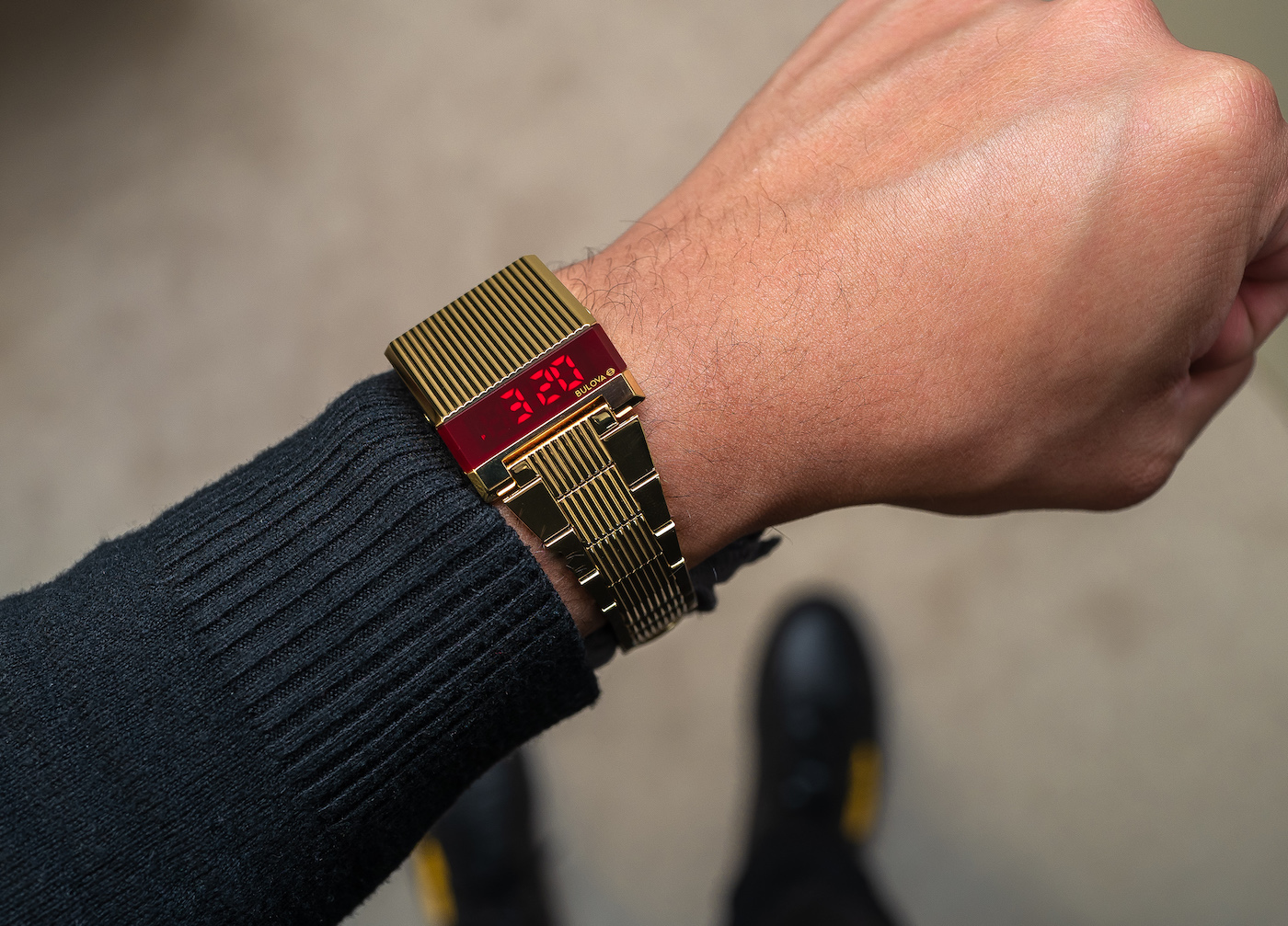 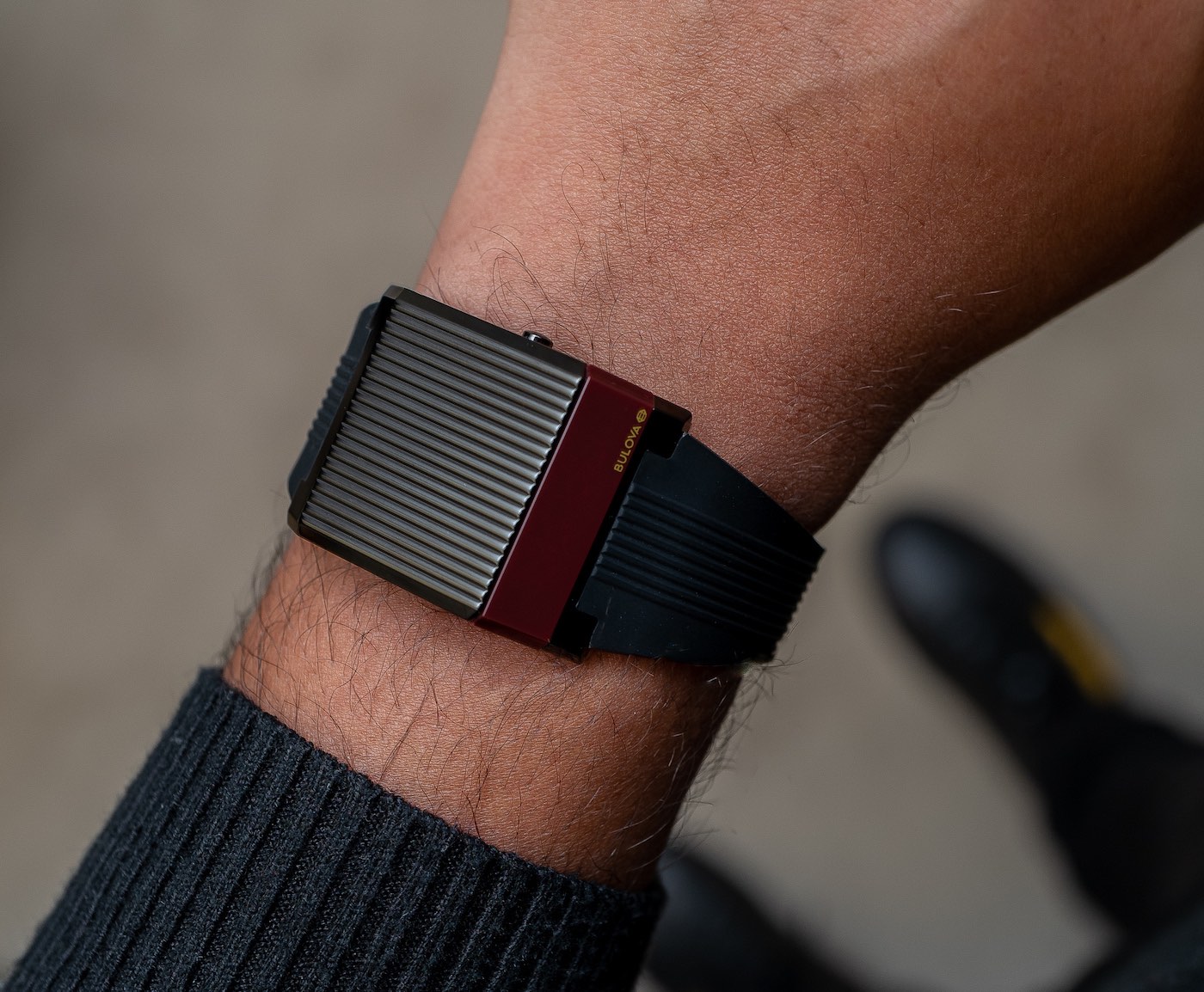 While we were playing around with these watches at Baselworld, our Zach Piña was adamant that it’s all about the gold-tone model. Personally, I have an affinity for the most affordable piece in the collection which is the black model. I have a weakness for a good rubber strap, and this one feels perfect on the wrist. 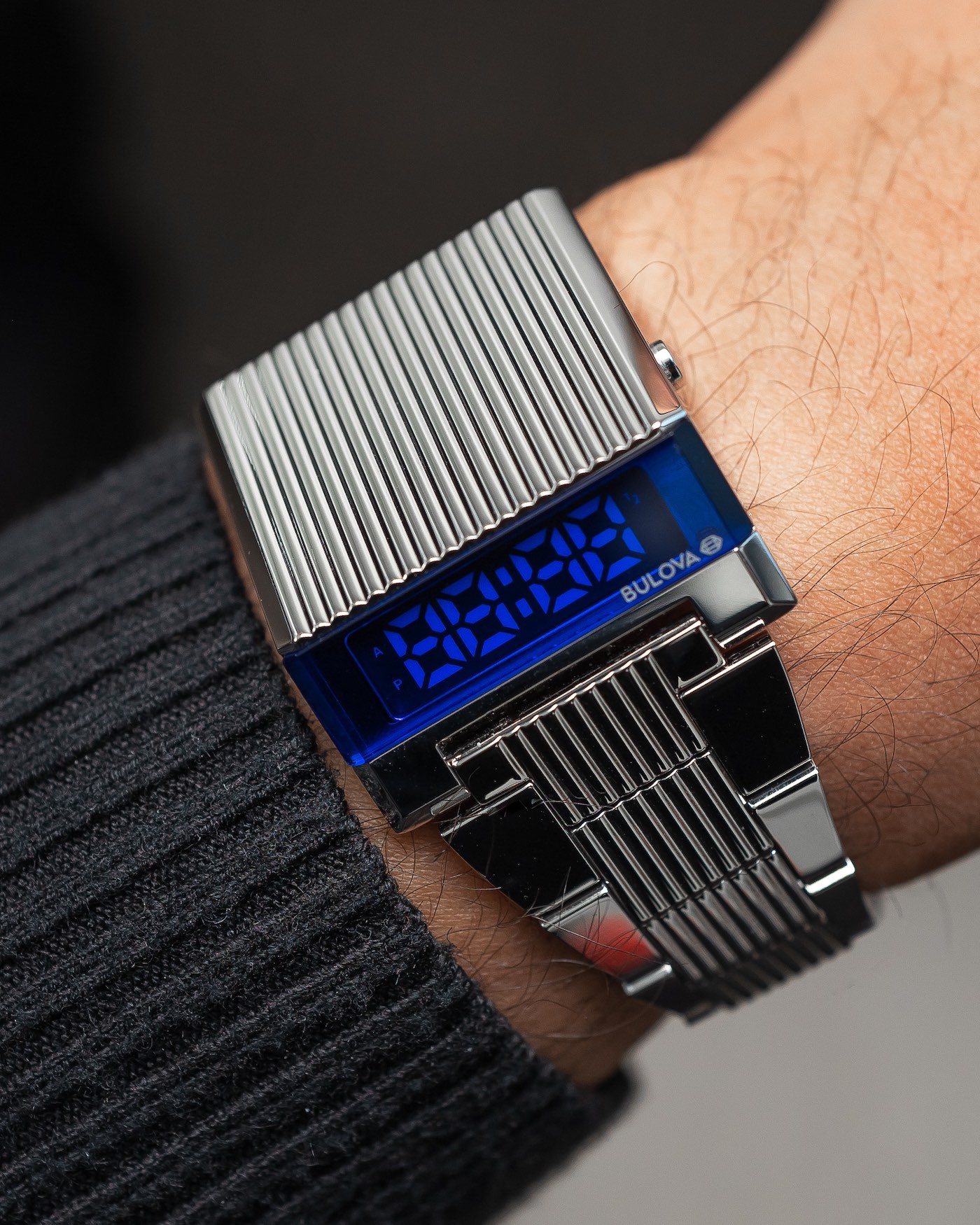 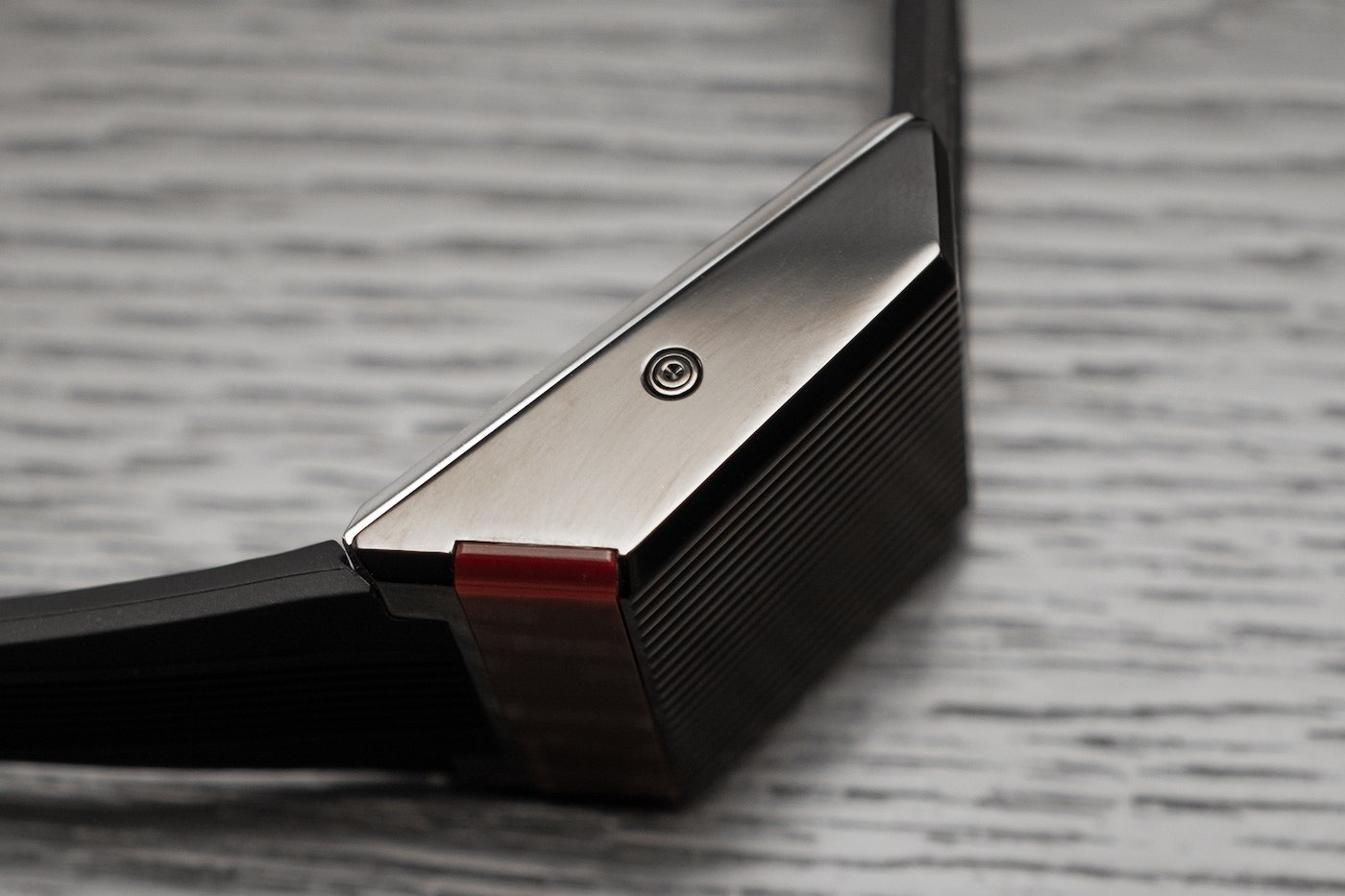 The trapezoidal case of the Bulova Computron measures 31mm-wide, just around 40mm-long, and 13.8mm-thick at it’s highest point. These numbers are pretty nebulous statistics considering the unusual shape and design of the case, but the proportions are just right for a unisex piece. The right side of the case has the button that activates the LED screen displaying the time (it’s black otherwise), though this single button on the Computron serves multiple purposes. Sequentially pushing the button allows you to cycle through a time, day/date, and second time zone. 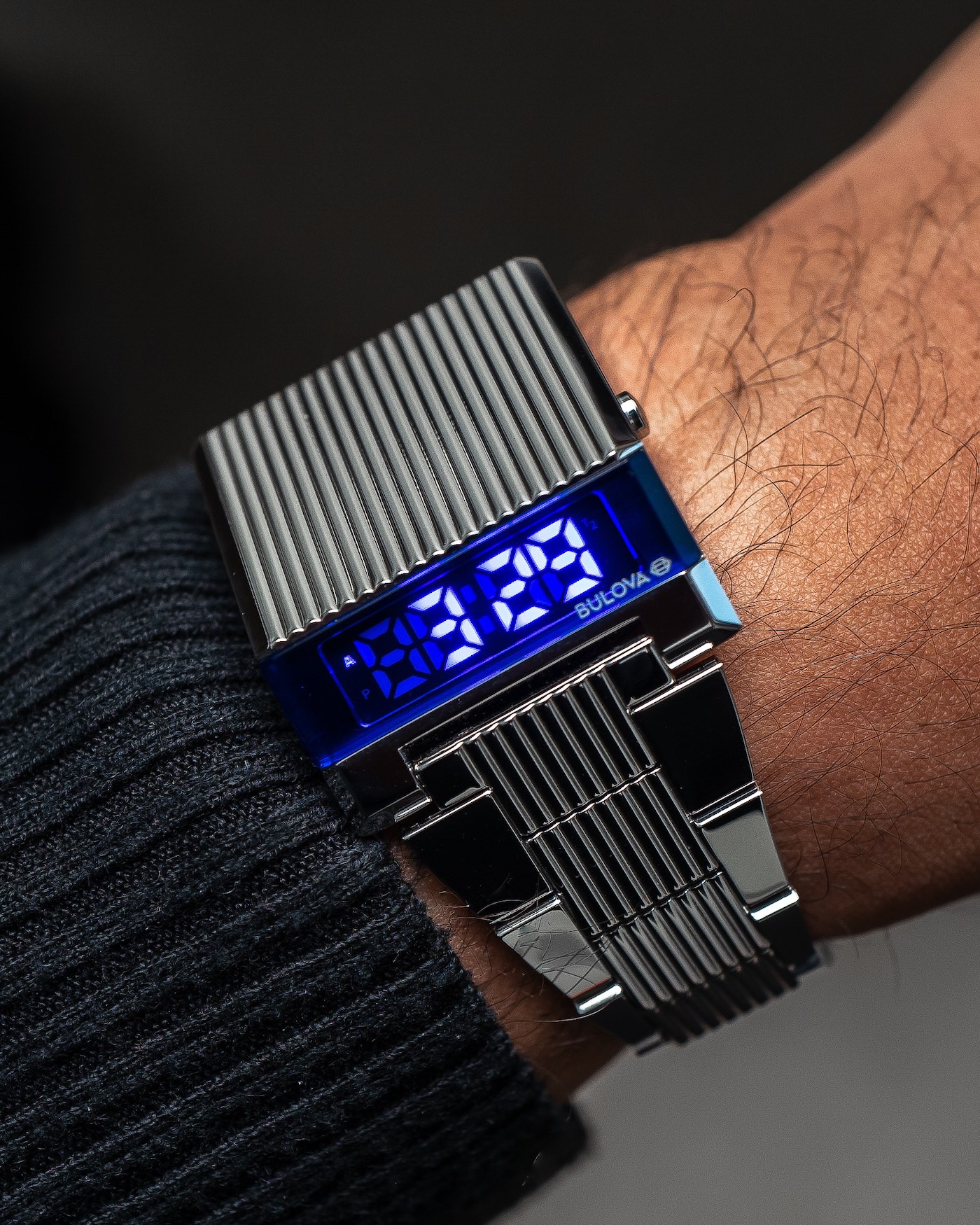 The quartz movement inside has about a two-year battery life, though I suppose that estimate will depend on how much you actually use and activate the LED screen. Personally I’m glad Bulova didn’t “modernize” the Computron by outfitting it with something like a motion detector that activates the LED screen at the flick of a wrist or something along those lines. I think maximizing battery life, while still adding useful functions like the second time zone and keeping the price where it is, was the magic formula that Bulova absolutely nailed. Well, those things and keeping the cool, almost retro-futurist style in tact. 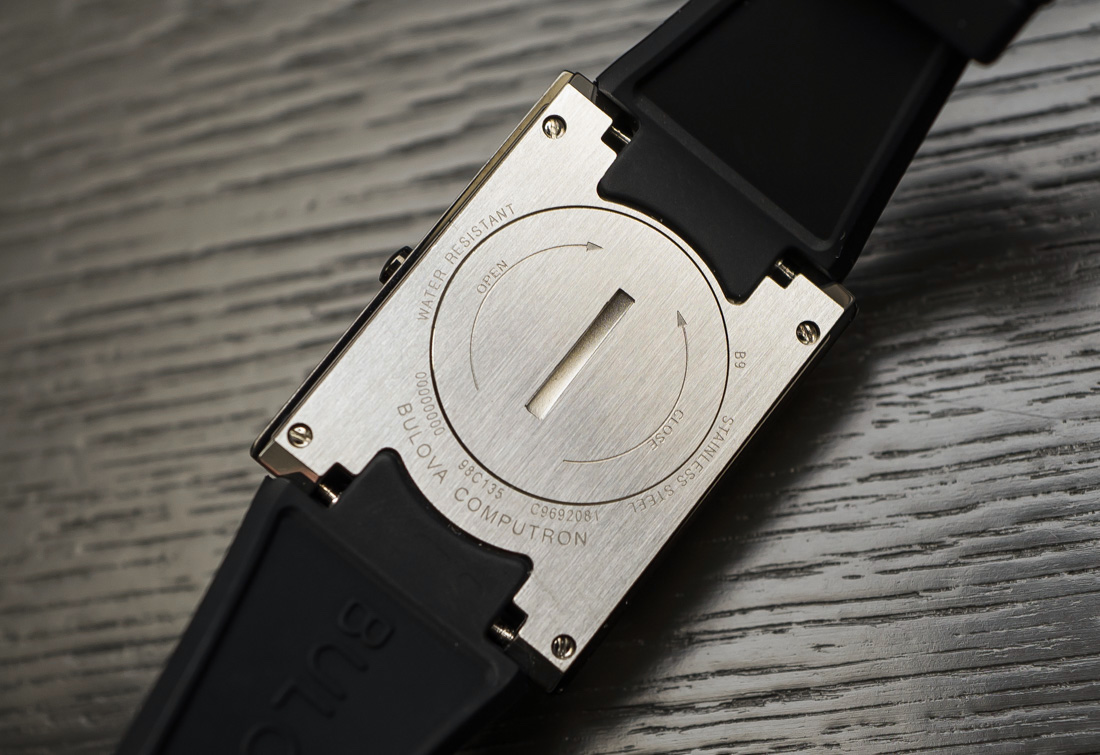 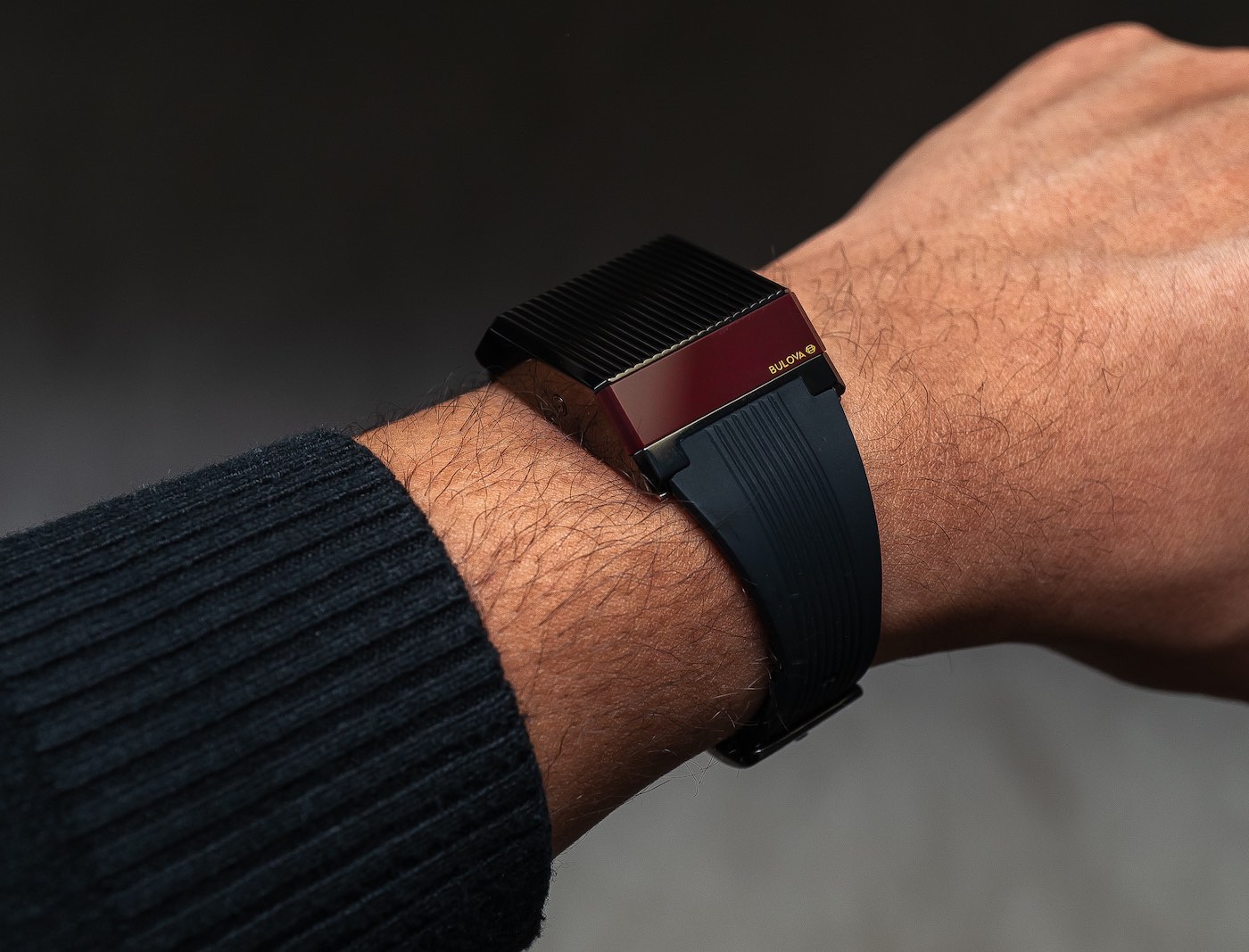 The original Bulova Computron from 1976 and the movies Silent Running and Star Wars only tangentially share the fact that both came after the 1969 moon landing when our imaginations on what the future would look like were being explored visually. When I think about it, the shape of the trapezoid keeps revealing itself as an architectural representation of “the future.” All this is to say that the Computron case, the drones from Silent Running, and some of the ships and vehicles from Star Wars like the T-47 Airspeeder all feel like they came from the same place in our collective imagination at the time. 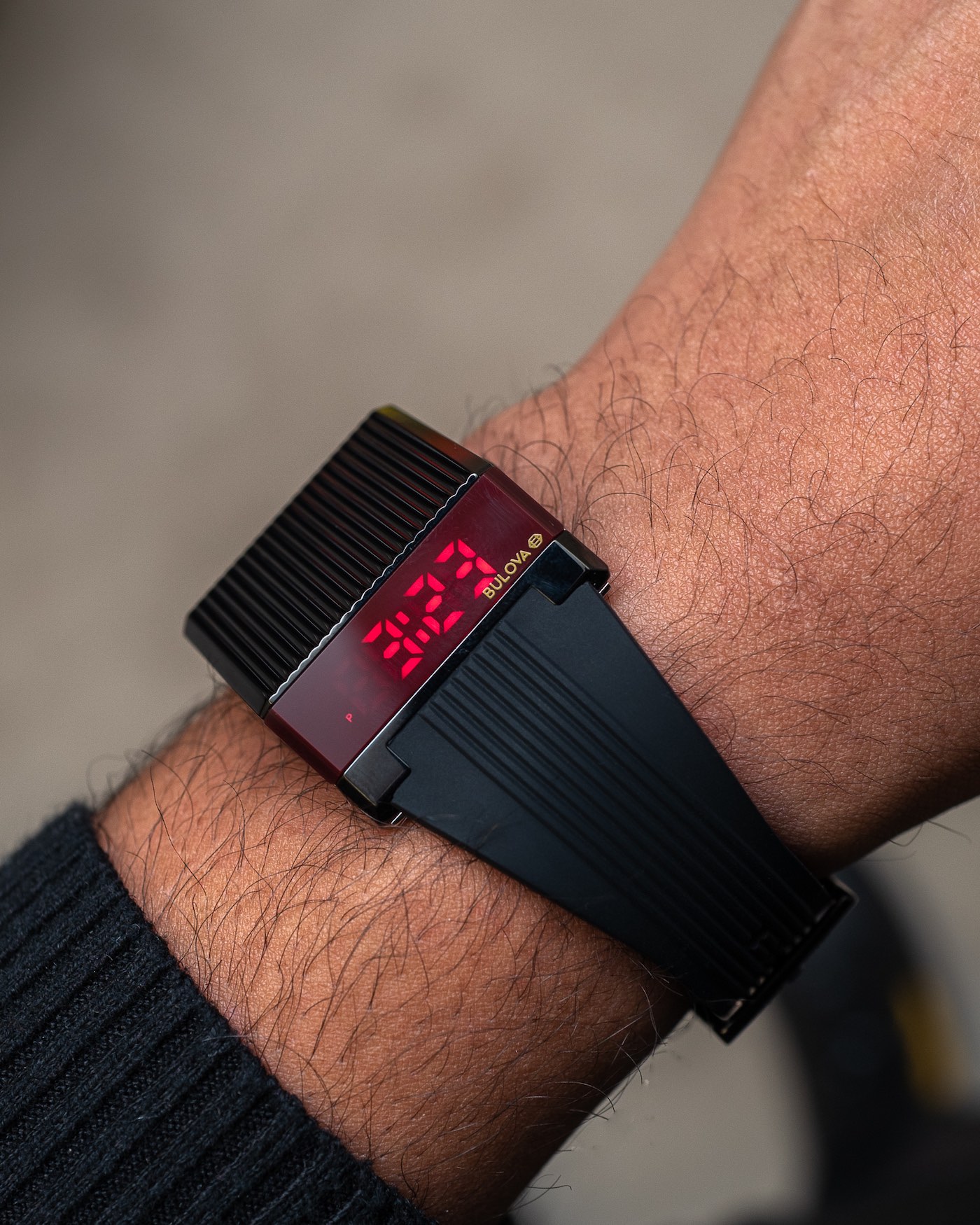 But, back to 2019 and these reissues. As I previously mentioned, there are three varieties here with the black on silicone strap, gold-tone, and stainless steel versions. Both the black and gold-tone models share the red-colored LED display but the stainless steel model uses a blue LED display. While it’s not technically a limited edition, Bulova is only selling the stainless steel/blue LED model for a limited time so I have a feeling these will be gone pretty soon. Personally, I’m hoping for a Computron that’s a combination of the black model with blue display. 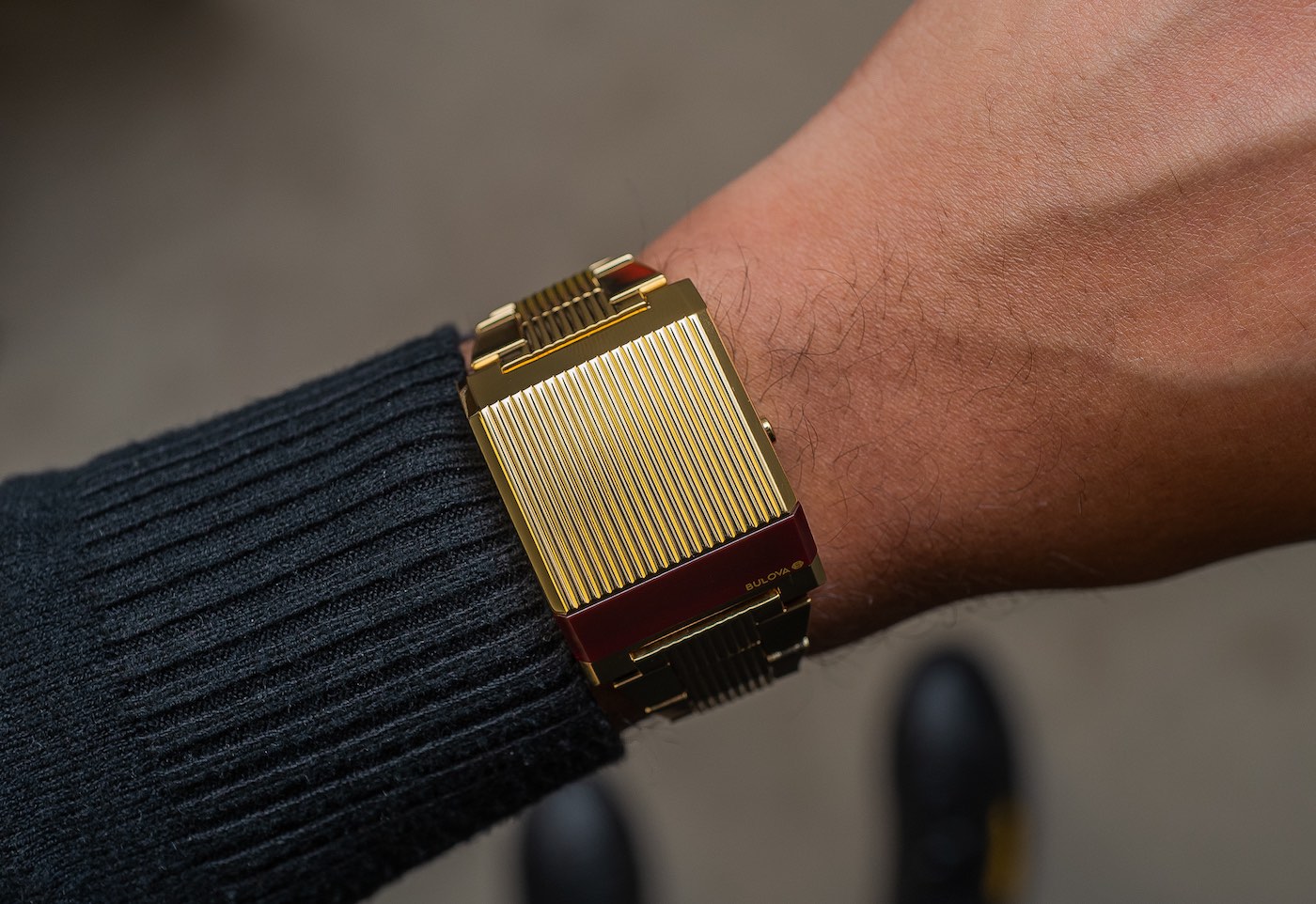 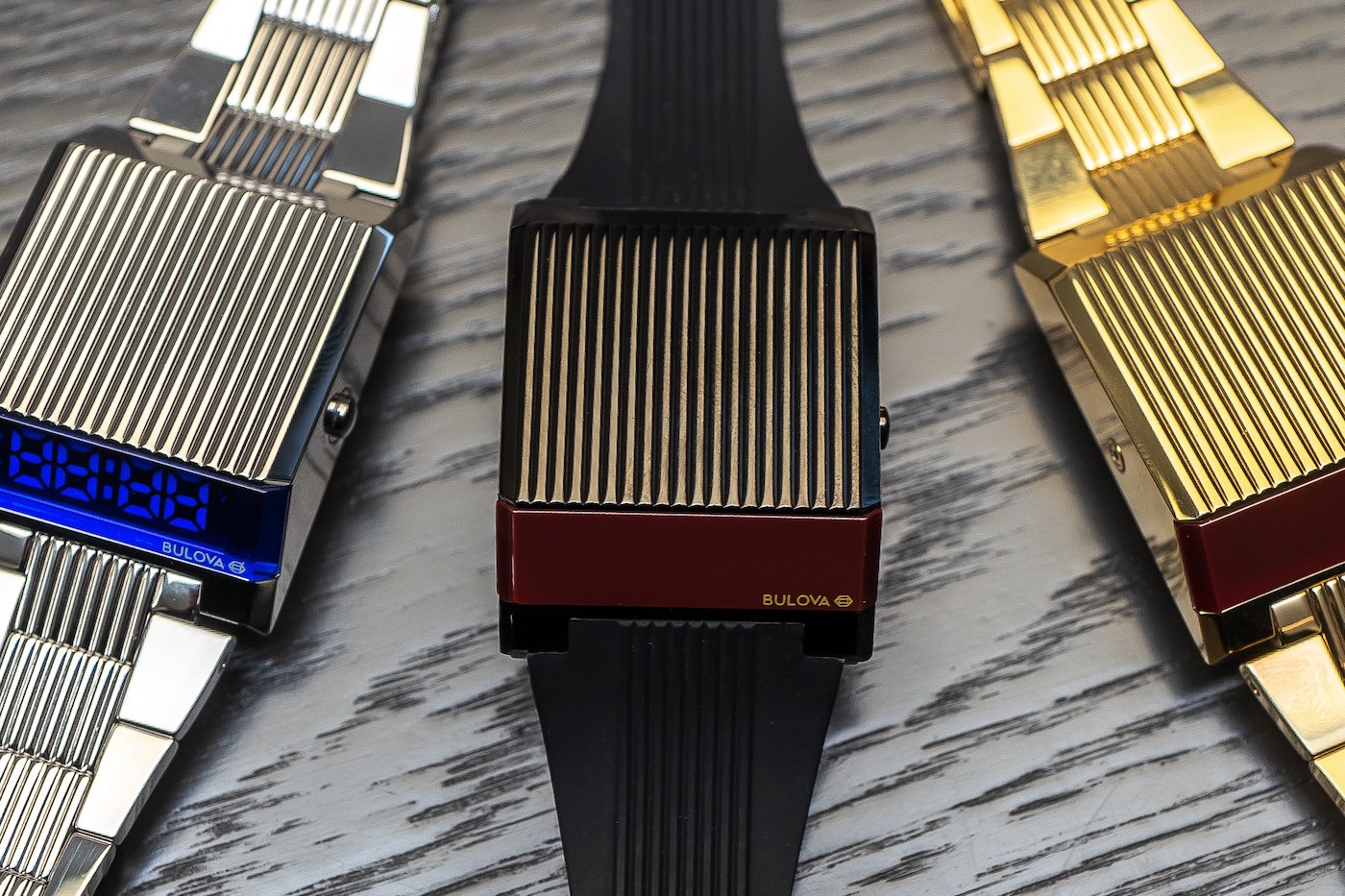 The Bulova Computron LED digital watch collection is currently available from Bulova’s e-shop. The black stainless steel on black rubber strap model ref. 98C135 is priced at $295; the limited-availability stainless steel model on stainless steel bracelet ref. 96C139 is priced at $350; and the gold-tone ref. 97C110 is priced at $395. To be frank, these are priced at the sweet spot, and I expect to see a lot of Computrons on people’s wrists this summer (and moving forward). You can learn more at bulova.com.