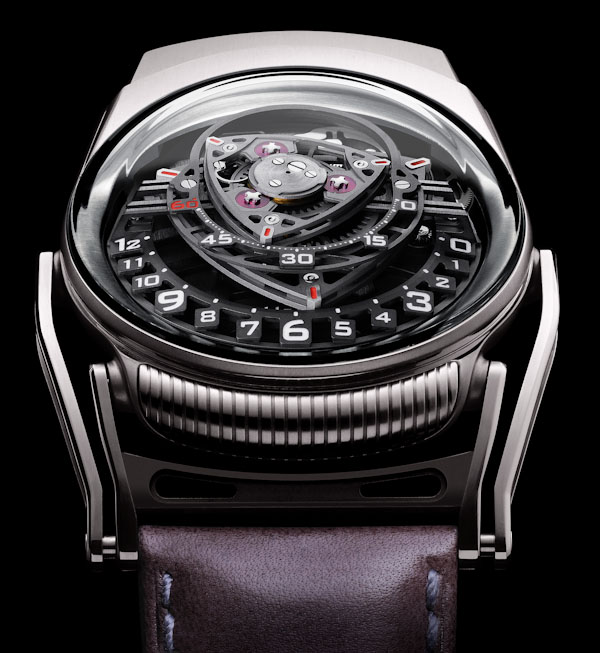 While it isn’t always the case that competing watch brands are friendly with one another, it most certainly is the case with high-end independent brands MB&F and Urwerk. The two brands share a deep respect for one another, as well as friendship, despite the fact that their products are thematically similar, priced in the same ballpark, and are aimed at more or less the same type of consumer. Still, the close relationship between the two is a testament to the deeper meaning of “Swiss Made:” which is actually a sharing of resources, talents, and ideas between people in Switzerland to promote “Swiss Made” as a whole. Enter the explosive new marque C3H5N3o9, otherwise known as the chemical make up of nitroglycerin.

Sitting with Max Busser of MB&F a few weeks ago here in Los Angeles, he shared with me a few scant details about a new experimental project he (and the technical mind behind MB&F Serge Kirknoff) was working on with Felix Baumgartner and Martin Frei of Urwerk. Almost as a dare, the two boutique brands would collaborate on yet a third brand. I needed to consider this for a moment. I’ve always known Max to be a very busy man, and I imagine the other parties to this experiment aren’t exactly overwhelmed with free time. Plus, starting a new brand isn’t exactly a simple endeavor. There would need to be new logos, branding, marketing implications, and of course business realities. So why do it? 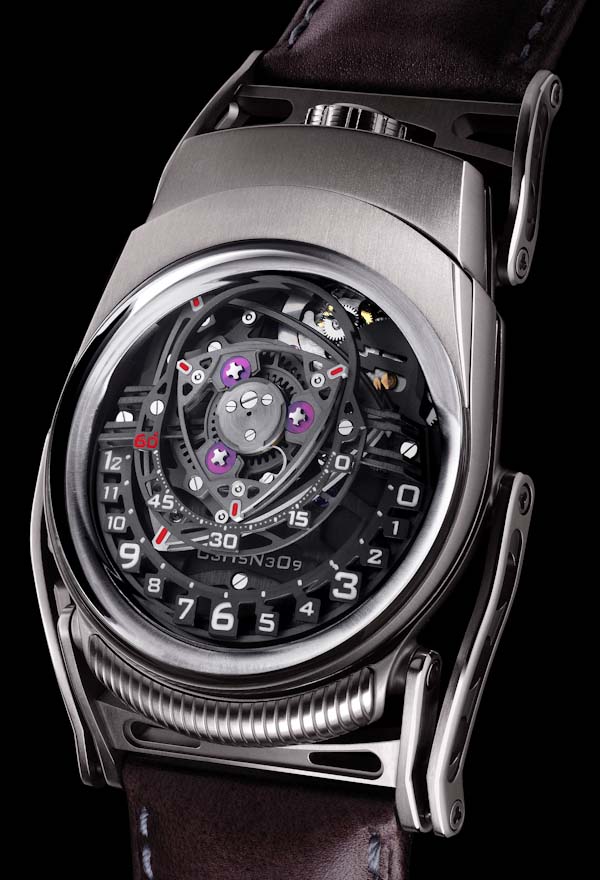 Doing what MB&F and Urwerk does requires a certain unrelenting drive and enthusiasm. These are idea men, and the proposition to execute a new idea may just be too attractive to let down. “A hybrid between the core values and aesthetics of the two brands?! Of course!” So they started working on it in a manner that allows them to lose money and not suffer too much if it fails. Again, it is just an experiment and they are having fun – at least that is the proposed notion. Even the name which comprises a series of difficult to remember letters and numbers proves how unorthodox the brand is from the start. Marketing? There would be none, just launch the website and send a little hint to friends that they “might want to check something out there.” Therein lays another experiment. Can blogs alone market and sell a few high-end wrist watches, simply by covering a cool new product for their readers? It is a question which has been on Busser’s mind for a while, and if successful could dramatically change the way boutique high-end watch brands do business by selling directly to consumers.

The watch itself is of course as interesting as the story behind the brand and the experiment. C3H5N3O9 even calls their watches “Experiments.” Right now there will be just one model in two versions. If successful there may be more. It is impossible to tell. The watches are called the Experiment ZR012 and RG012. They are the same watch but with a zirconium or 18k red gold case. Design wise you see equal influence from the worlds of MB&F and Urwerk. Busser shared a telling anecdote about this and the involvement of egos in brands which in many ways do portray someone’s soul. He remarked that when he saw the final designs he smirked and thought to himself “great, I have just designed an Urwerk.” Nearby at Urwerk, Felix had a similar thought by thinking “great, I just designed an MB&F.” For me the Experiment ZR102 takes the case concept of a MB&F HM4 and matches it with the movement concept of an Urwerk. In all it looks like a steampunk vacuum cleaner mixed with the Urwerk watch movement “that never was.” 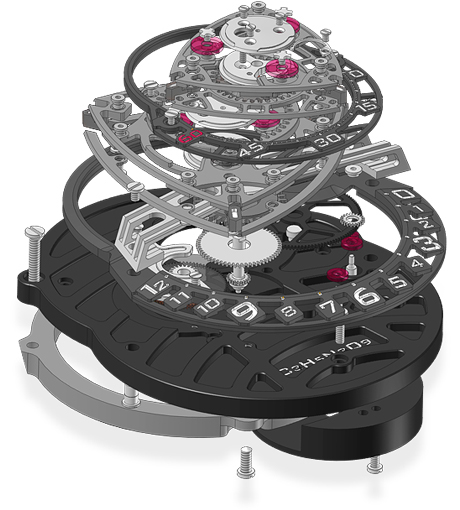 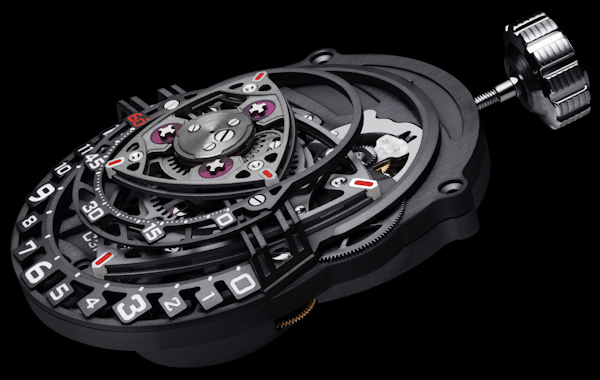 C3H5N3O9 designed a movement based on the principle employed in a Wankel rotary engine. For car lovers, the Wankel concept is used in Mazda’s RX-8 rotary engines. The principles uses a sort of triangular engine rotor that moves in an eccentric pattern. C3H5N3O9 takes two of these rotor style discs on top of one another to indicate the minutes and hours along linear paths. Its like a Wankel sandwich with watch gears in the middle. While the movement and design is brand new, it follows the same basic concept Urwerk uses in most of their watches to indicate the time. The movement is manually wound with a 39 hour power reserve, and power reserve indicator displayed on the rear of the watch case. Unlike the C3H5N3O9 name might suggest, the movement does not create any explosions. Depending on your tastes, it might however be the molecular formula for cool.

The ZR012 and RG012 watch case is 44mm wide and 55mm tall without the lugs. Like the MB&F HM4 watch, the lugs on this case articulate to fit over your wrist better. I imagine that it will be large, but not huge in size on the wrist. These watches tend to look larger in images than they actually are. The ZR012 is in zirconium, which is a light and highly corrosion resistant material very similar to titanium. Again, the RG012 model will be in 18k red gold. 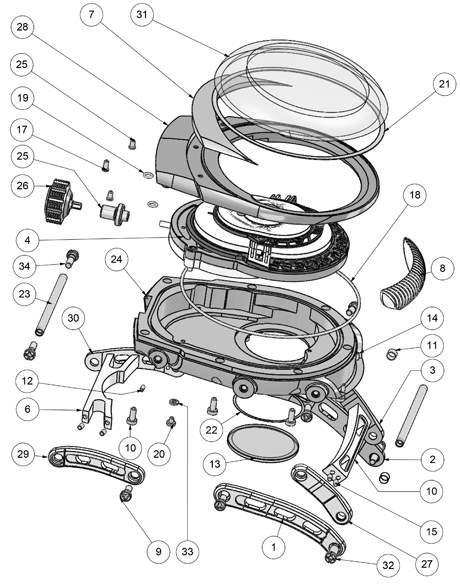 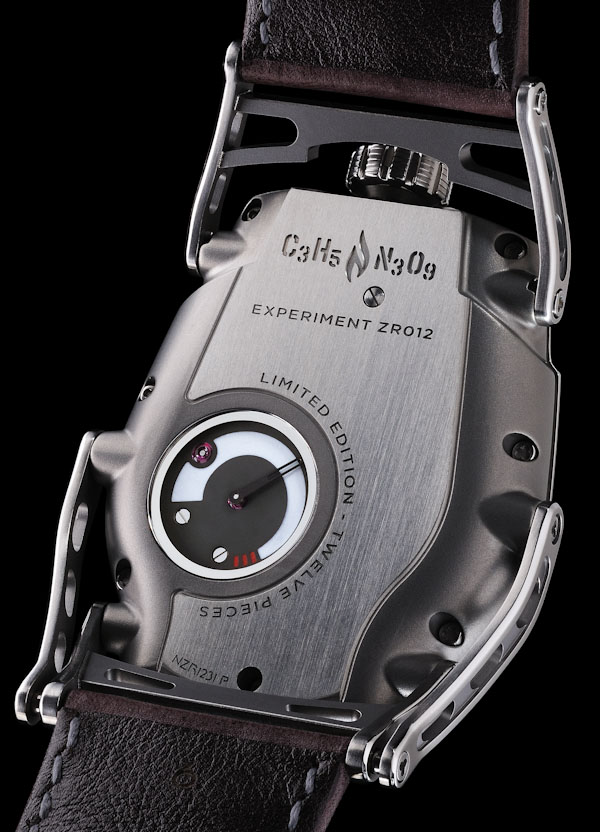 It can probably be said that C3H5N3O9 watches will appeal to both MB&F and Urwerk fans. Will it attract new people to this world who haven’t previously seen an appeal? Not likely, but that is OK as there will only be 24 pieces in total. The C3H5N3O9 experiment is small enough to appeal to those existing enthusiasts who will gobble this up. What goes to be seen is what happens a few days from now after the main watch websites cover the story. As I said, there will be no marketing or outreach to traditional media. Those in the industry or familiar with it should understand what the experiment is seeking to determine. C3H5N3O9 is hoping to take deposits or orders on all the 24 (12 in zirconium and 12 in gold) pieces via their website and then produce the collection. Pre-ordering requires a deposit of about 33,000 Swiss Francs. The total price of the C3H5N3O9 Experiment watches will be 110,000 Swiss Francs each. For more info or to order visit their site here. 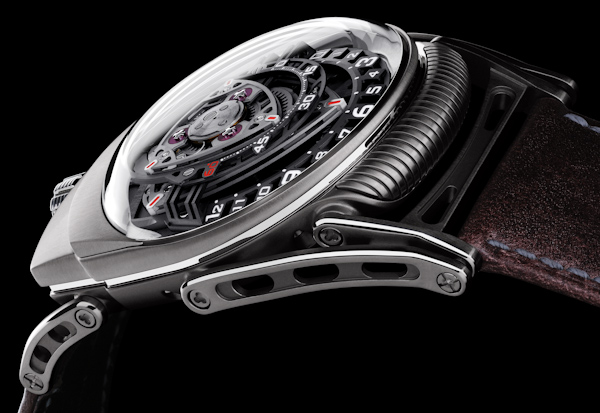 Sapphire crystal with anti-reflective treatment both side

Number of plots to create epitrochoids for hours and minutes: 180

Tolerance between hour and minute indication rotors and inside of epitrochoids: 0.20mm