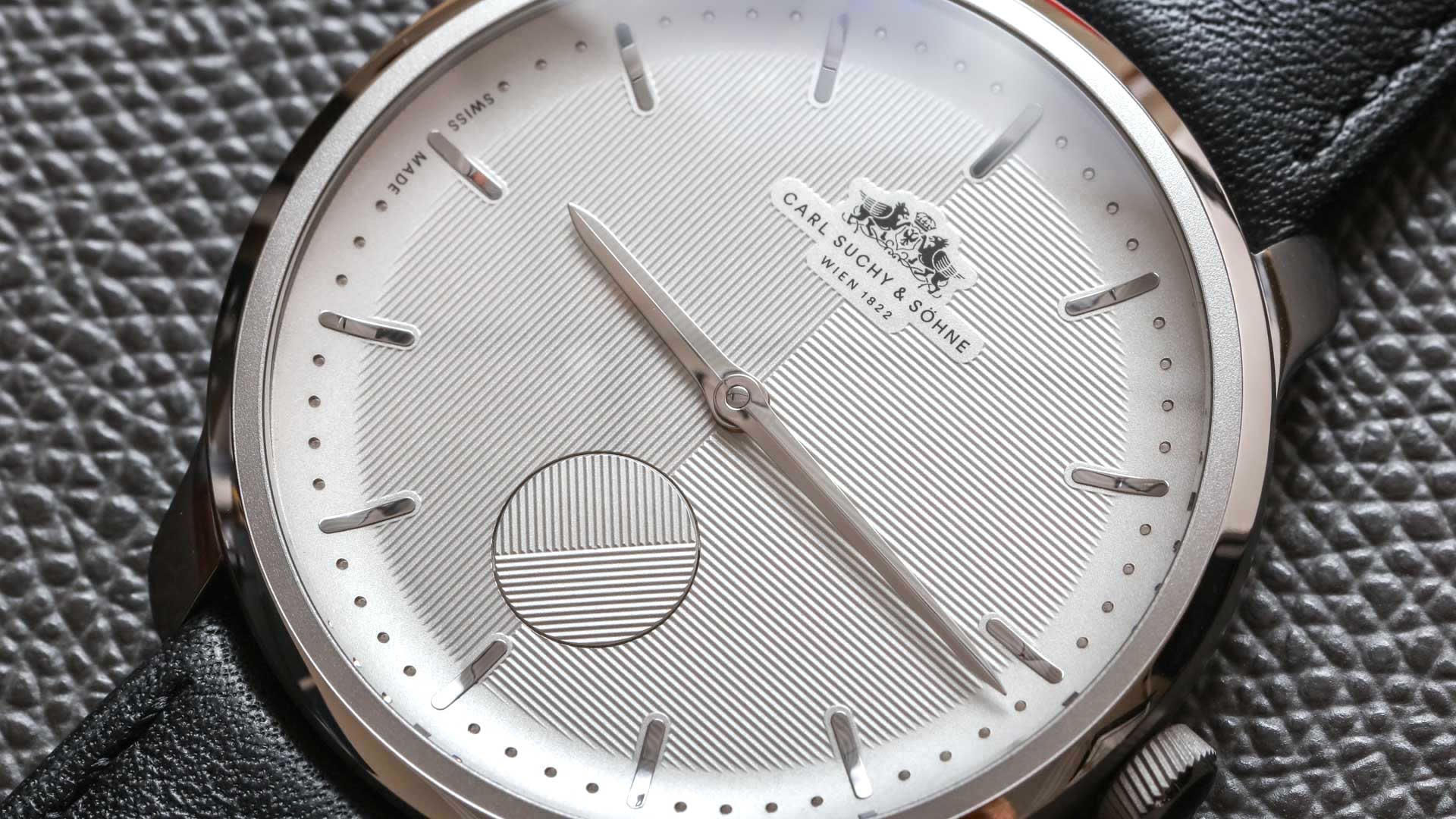 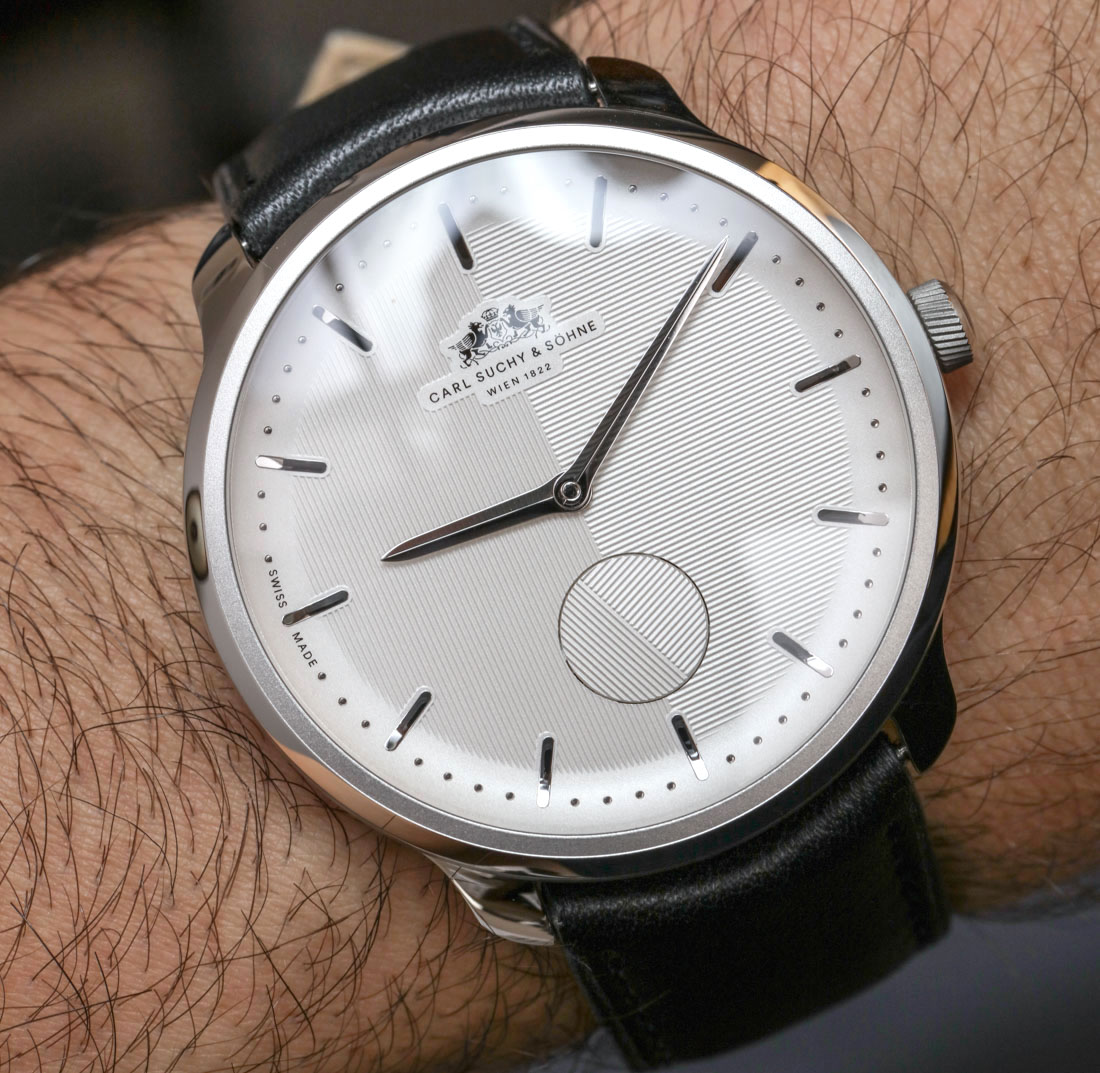 The challenge of designing a contemporary dress watch isn’t lost on the readers of aBlogtoWatch. Most of today’s best dress watches look like those from sometime yesterday. More so, the entire concept of what a dress watch needs to be is changing. What was once a timepiece meant to be worn with a suit, is rapidly changing to have other uses where “sport watches” aren’t always appropriate. The challenge of making a modern dress watch is compounded by the fact that in the fight for versatility, the sport watch tends regularly win. Men commonly wear a dive watch with a suit, but rarely a slim dress watch on a hike – despite the fact that today’s dress watches are far more durable than many of yesterday’s basic sport watches. That’s a big set up for a review of the Carl Suchy & Sohne Waltz No. 1 watch, but it is in fact a rare “Chopardian” (we like their L.U.C dress watches for similar reasons) watch in that you don’t need a tie for it – but it does suggest a formal or elegant attitude. 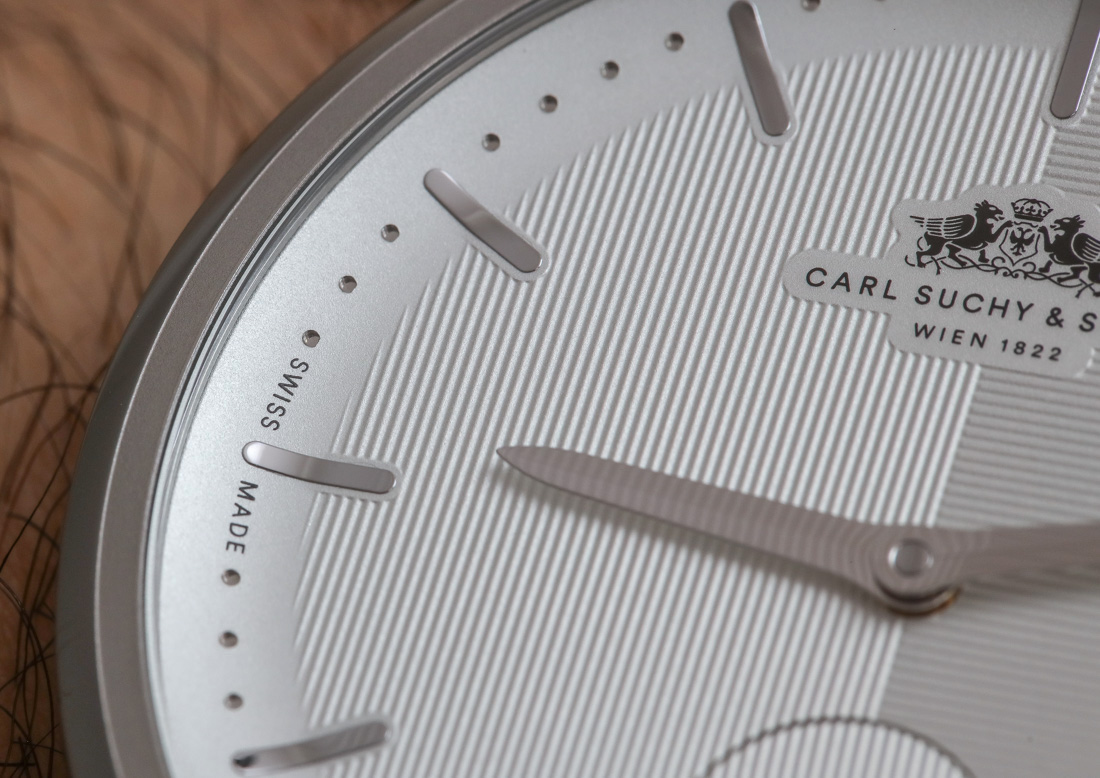 When aBlogtoWatch debuted the Carl Suchy & Sohne Waltz No. 1 watch here, I was enthused by the promise of the design, but reserved final judgement for an in-person inspection. After reviewing this watch I can say that it is indeed a successful design and an excellent contemporary watch for all dressy and slightly casual situations. Though, the watch has a few small quirks and some of the promised elements of the launch images didn’t make it to the final product such as the engraved casebacks. 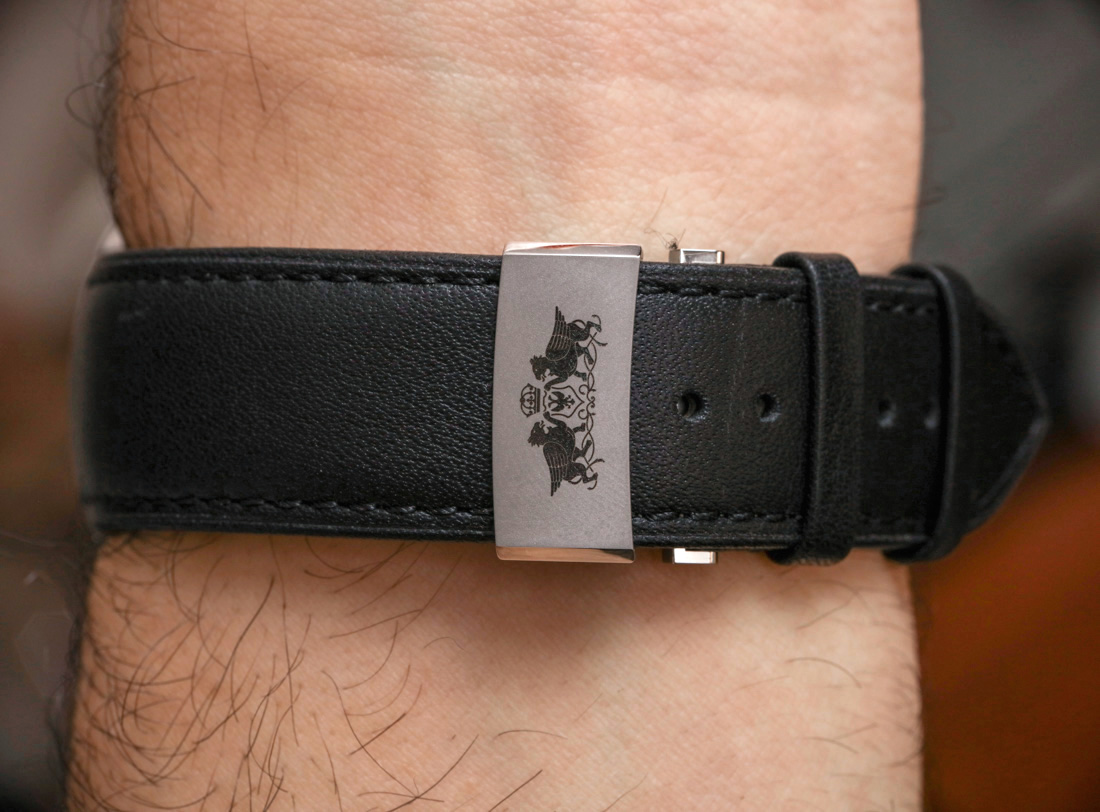 I’m not entirely sure who is behind Carl Suchy & Sohne today. With roots in the Austro-Hungarian Empire, the historic brand “took a creative break” according to the brand’s website in 1918. Approximately 100 years later they are back. Same Austrian charm, entirely new owners! The brand is in fact still based in Austria, even if the watches are Swiss Made. According to Carl Suchy & Sohne, the theme of today’s brand is to combine Viennese elegance with Swiss precision. So far so good. 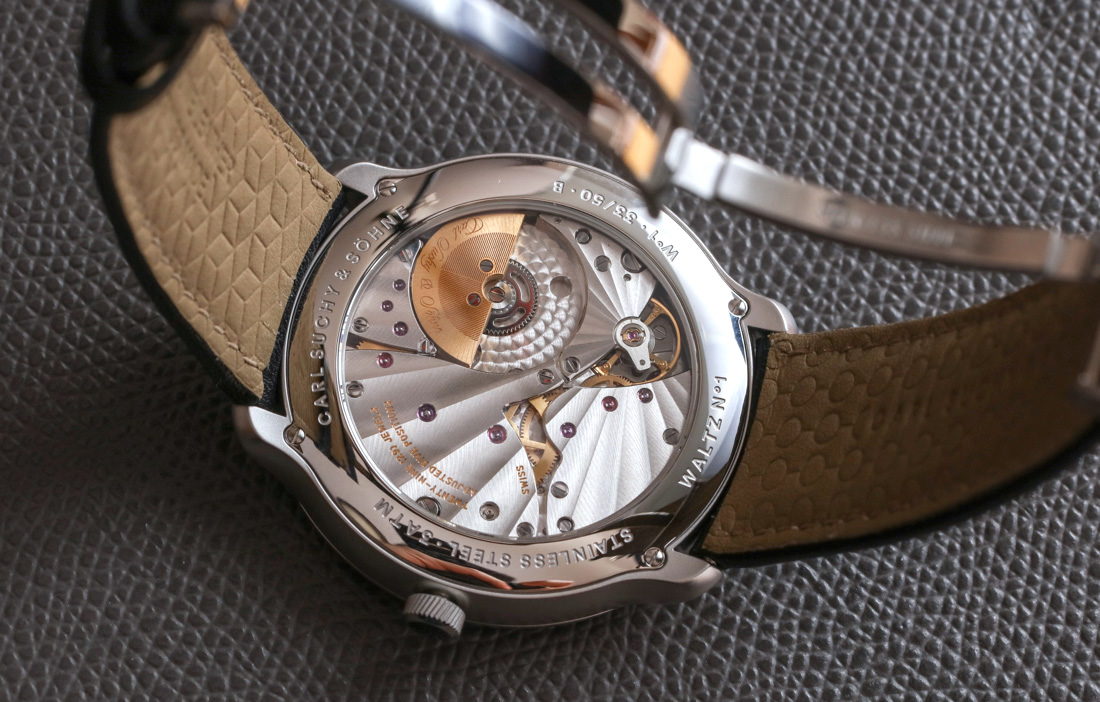 In good Austrian high-society form, the brand’s first watch is poetically referred to as its “first dance” or rather, Waltz Number One (Waltz No. 1). Let’s talk movement first. For the money this is a good deal, and I like how the single most expensive element in the watch is the mechanical movement inside (visible through the sapphire crystal caseback window). Carl Suchy & Sohne opted for a Swiss Vaucher caliber VMF 5401 automatic with a gold-plated micro-rotor. This is among the nice “volume” Swiss movements you can buy when it comes to design and finishing. The relatively thin automatic movement allows for a decently thin case size at just 9.3mm thick. The movement operates at 4Hz with 50 hours of power reserve. 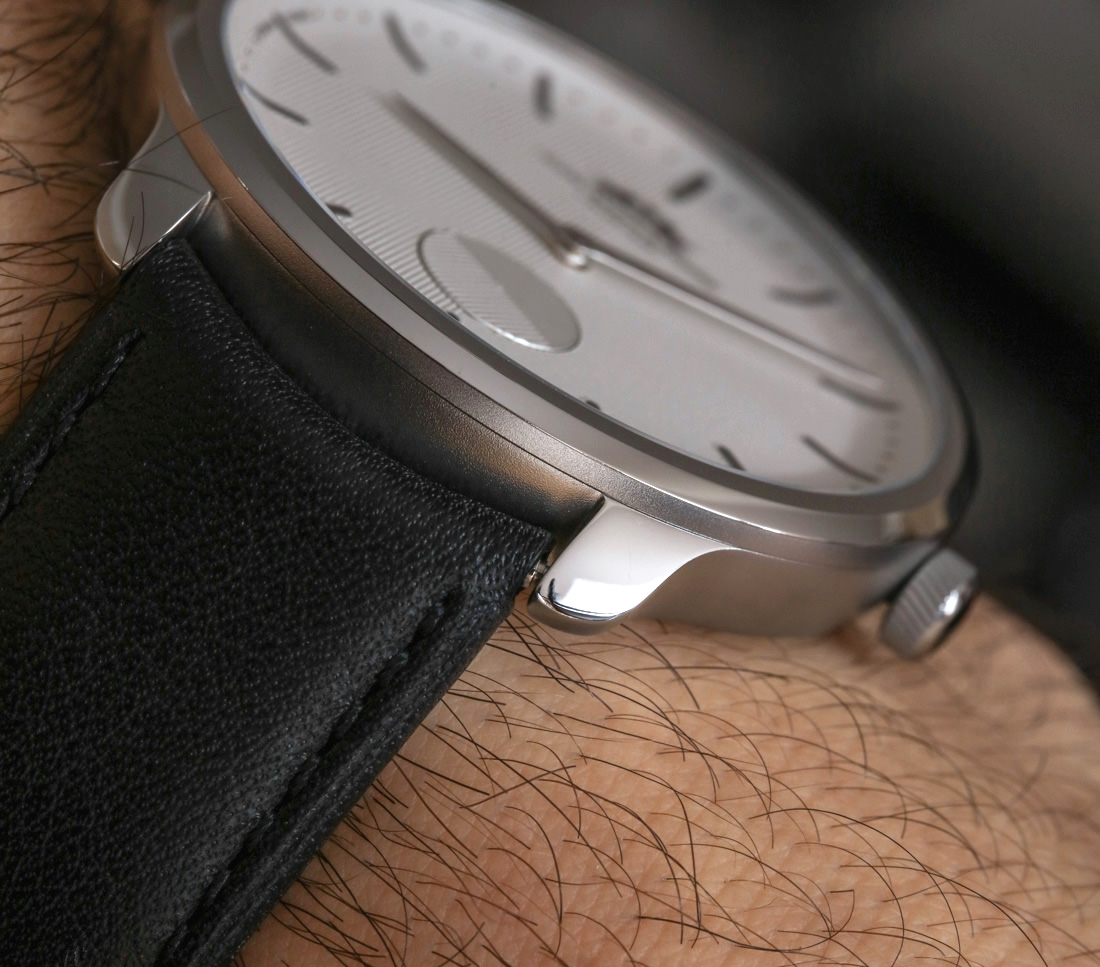 The steel case is 41.5mm wide (water-resistant to 30m), with overall excellent proportions. What I can easily say is that the Waltz No. 1 is both a professionally designed and produced timepiece. It doesn’t strive to be the absolute best at anything, aside from offering a meaningful, contemporary dress watch experience at a price that isn’t obscene (for watch collectors, that is). Design-wise the Waltz No. 1 is said to be inspired by the work of Austrian architect and philosopher Adolf Loos. More correctly, the Waltz No. 1 is inspired by the lessons of Mr. Loos, not his actual work. 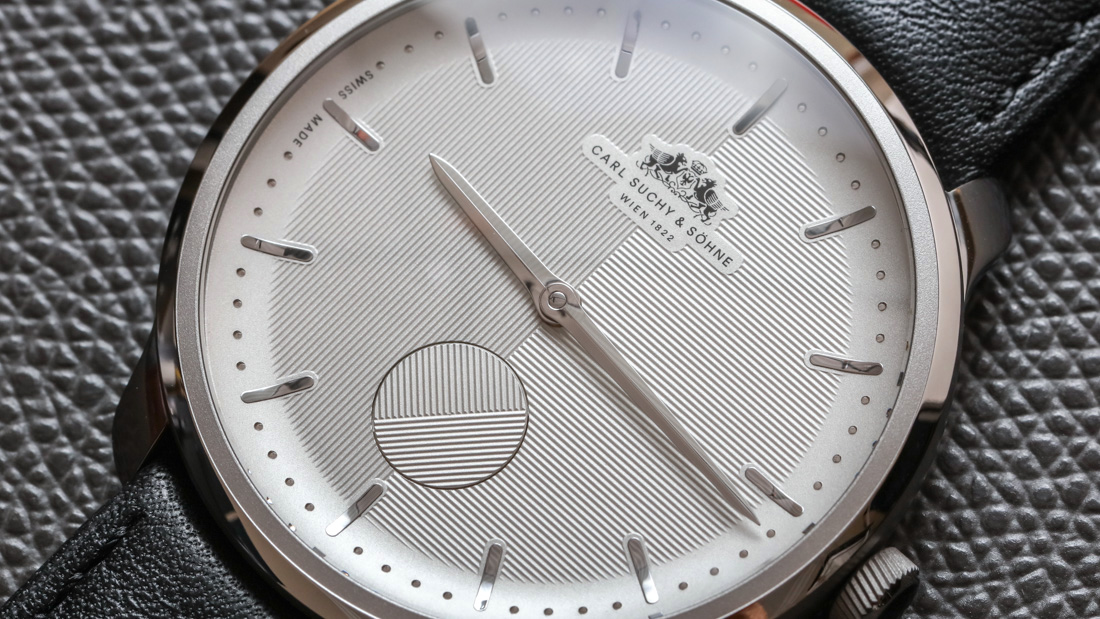 Loos was an early advocate of minimalist design – or at least minimalist trends. Though I am not sure if that is what Loos would have called it. He seemed to have it out for what he called “unnecessary ornamentation.” I believe he was often surrounded by structures that were otherwise not particularly useful, but rather slathered over with decoration and ornamentation. I understand that Loos was much more interested in the utility and attraction of a building’s underlying form, in relation to the use and needs of the space. Translated into a modern dress watch, what does that mean?

I’ll say that while I really appreciate the art of true minimalism, I don’t like it when people confuse it with simplicity. Minimalism doesn’t need to be dense, but when well done it is anything but simple (though accidents happen) – just like this watch. Carl Suchy & Sohne have attempted to say a lot with a few lines (metaphorically speaking), and they certainly have. The Waltz 1 uses relatively few lines to say quite a bit. 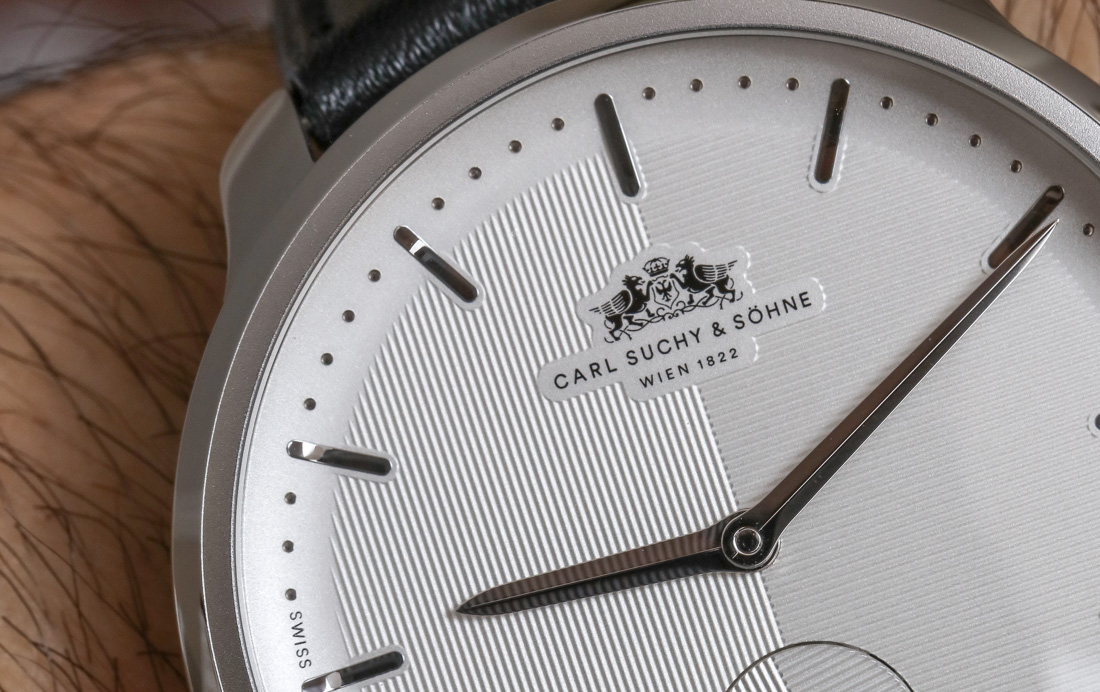 My favorite part of the Waltz 1 design is how well it scores on what I call “full space integration.” There isn’t space in the design that doesn’t seem to be used for something. Thus, while nothing is cluttered, all the “zones” in the design flow together very elegantly. Speaking of “flow,” the cases lines of the Waltz 1 certainly do coalesce like running water, making a uniquely sensual, though masculine (thanks to its size and proportions) shape. Nods to its mechanical nature are subtle, but present in areas such as the texture engraving in the crown (which quickly merges into a black stone cabochon).