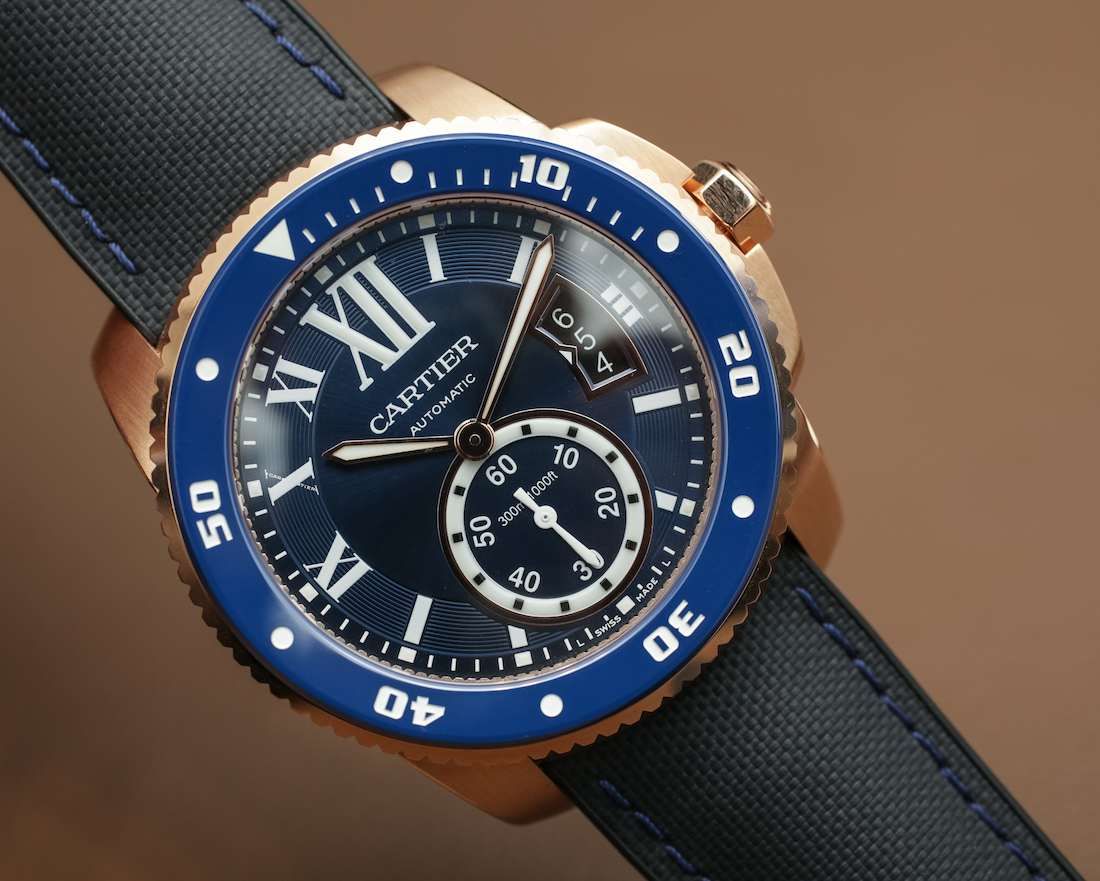 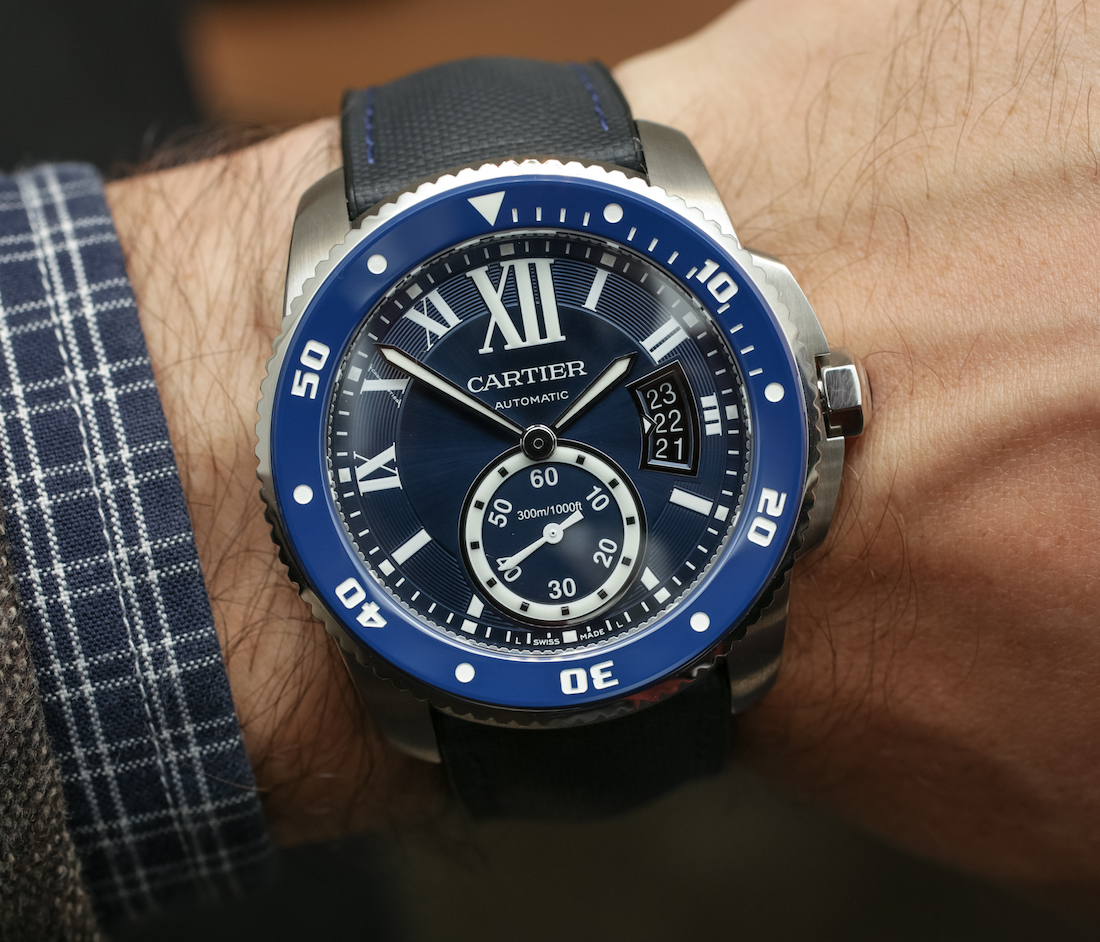 Continuing the watch design trend of “more blue is better,” Cartier showed a blued version of their Calibre De Cartier Diver at SIHH earlier this year. As with many of its peers, this simple color swap manages to impart this rather dressy Cartier diver with an appeal distinct from that of the original black-dialed version. From steel to solid gold, the Cartier Calibre de Cartier Diver Blue wears the color well, adding a playful touch of personality to a brand often characterized by their stoic aesthetic. 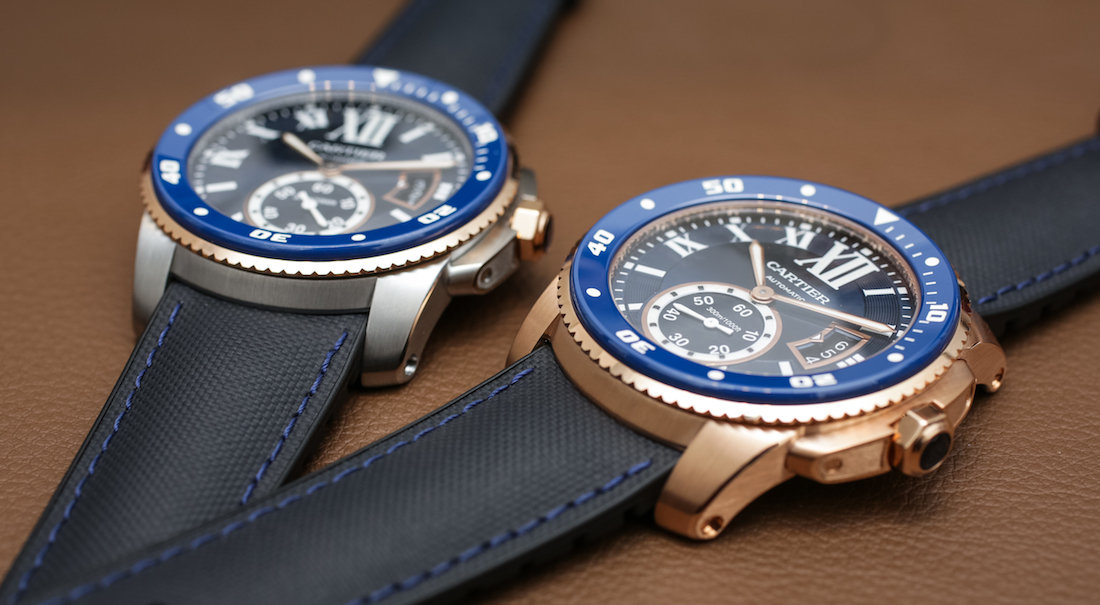 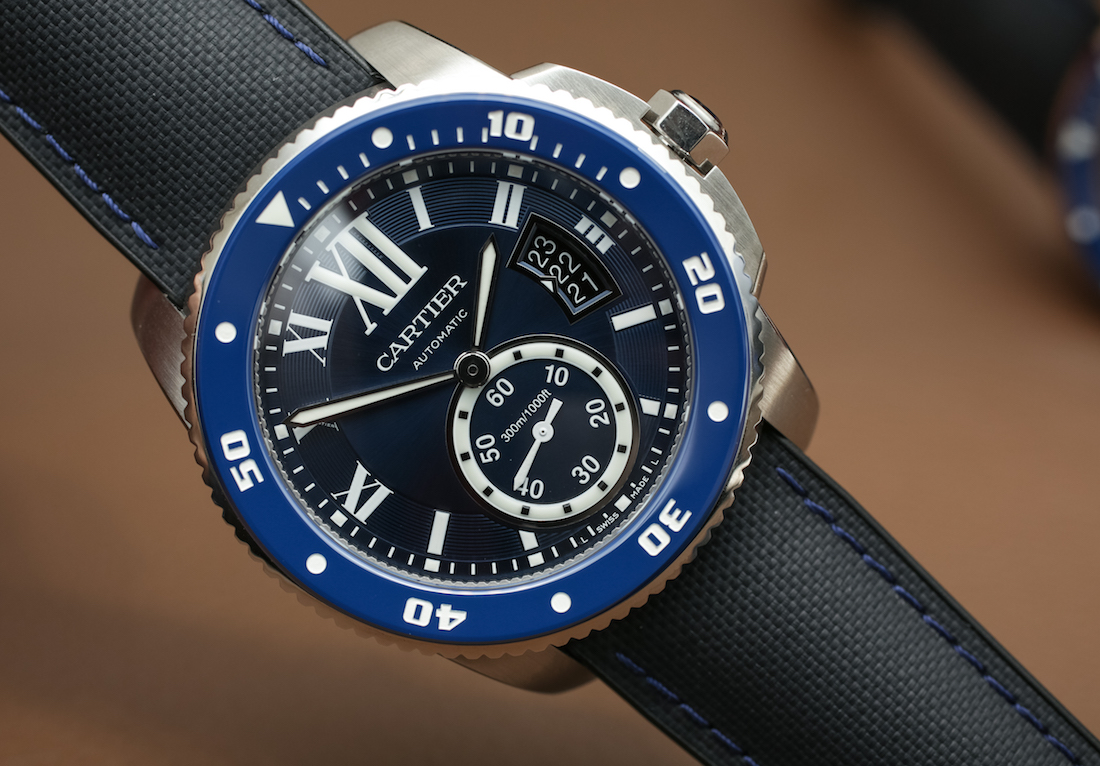 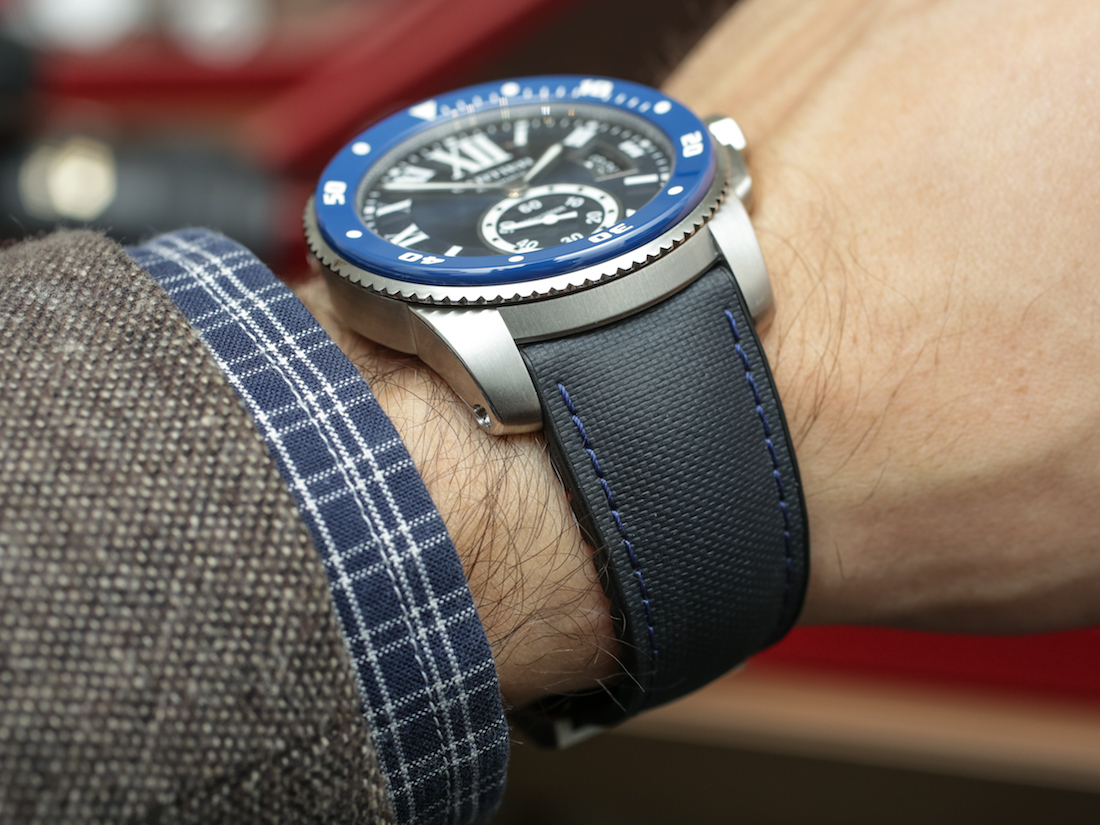 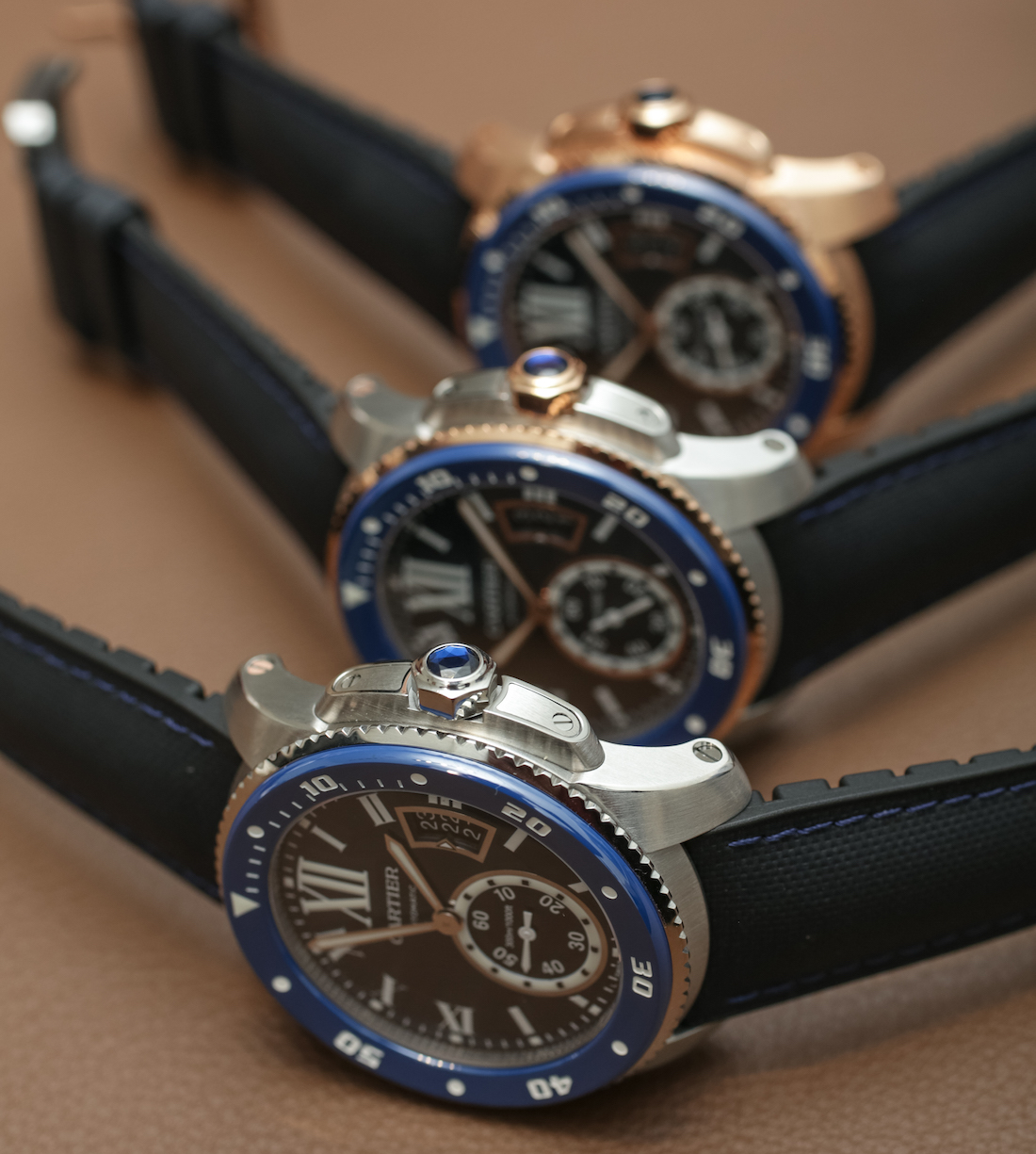 While few dive watches actually see use as tools for scuba diving, many watch buyers desire a watch with the ancillary qualities of a dive watch (robust construction, good legibility, water resistance, and a casual masculine appeal). So, within the large market for casual dive watches there is a demand for higher-end products that retain some semblance of their toolish roots. A very similar thing has happened to SUVs over the past twenty years. What was once a tool then became popular for its strong versatility and was eventually co-opted by the luxury market. Think of the difference between an old Wrangler and a new Grand Cherokee, or a Merc 280G vs a modern G65. 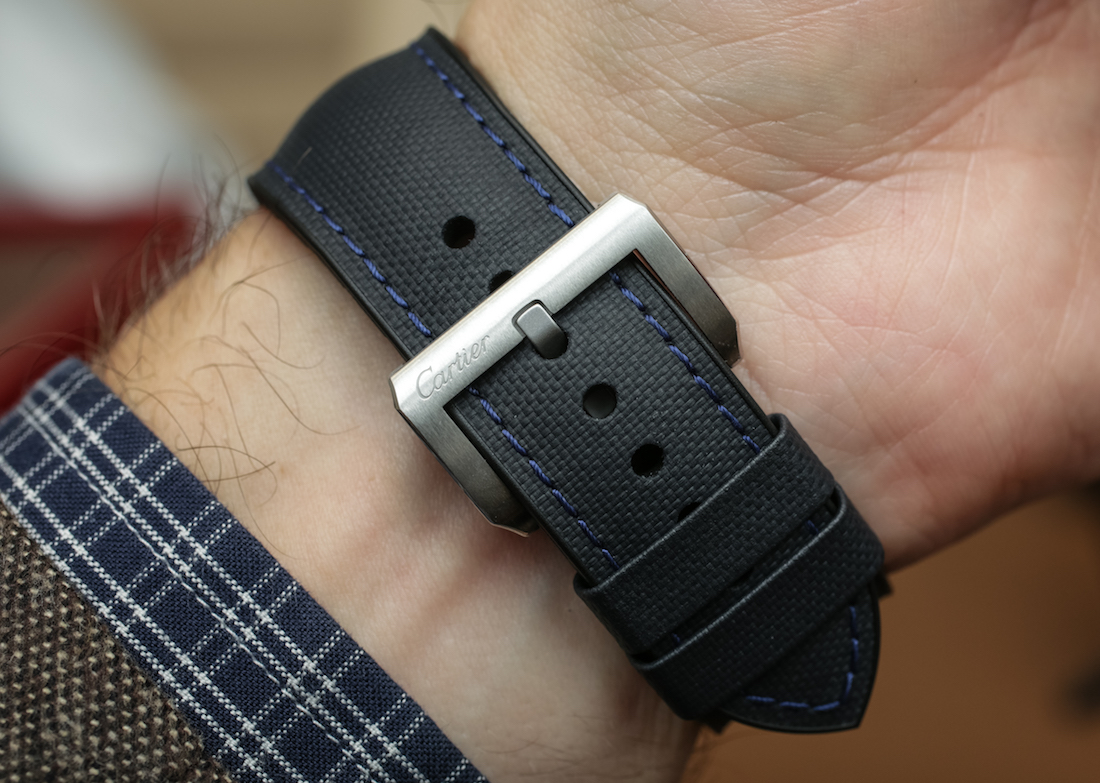 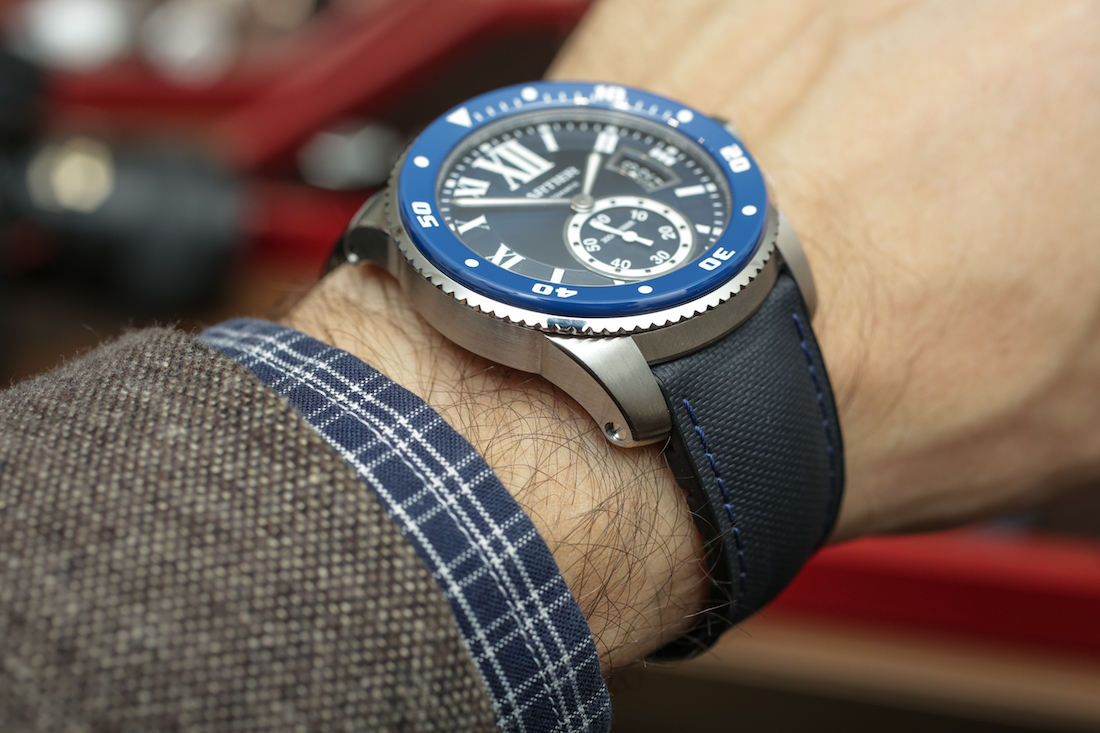 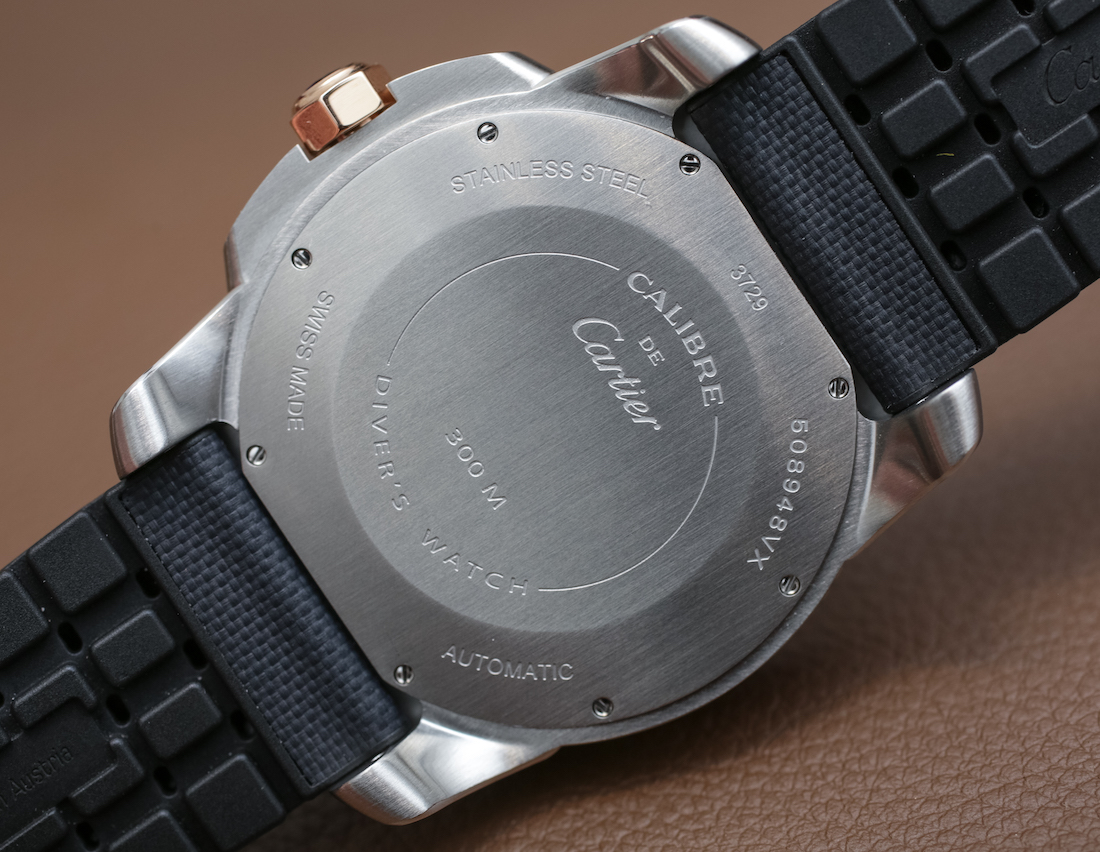 As such, the Calibre de Cartier Diver Blue, while undeniably a luxury product, is water resistant to 300 meters, has a legit dive bezel, strong legibility, and a capable in-house automatic movement. Inside its nicely detailed case, we find Cartier’s 1904 MC movement, sporting double barrels that provide more consistent torque over the 48 hours of power reserve. With 27 jewels and a 4Hz rate, the 1904 MC is not especially fancy, but it is a capable movement that finds a fitting home in the Calibre de Cartier family. 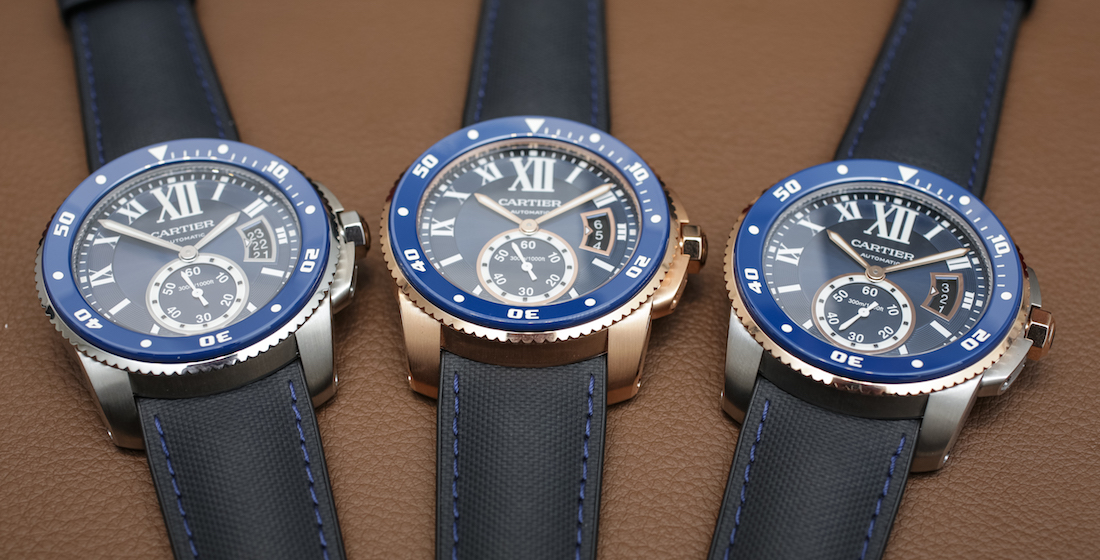 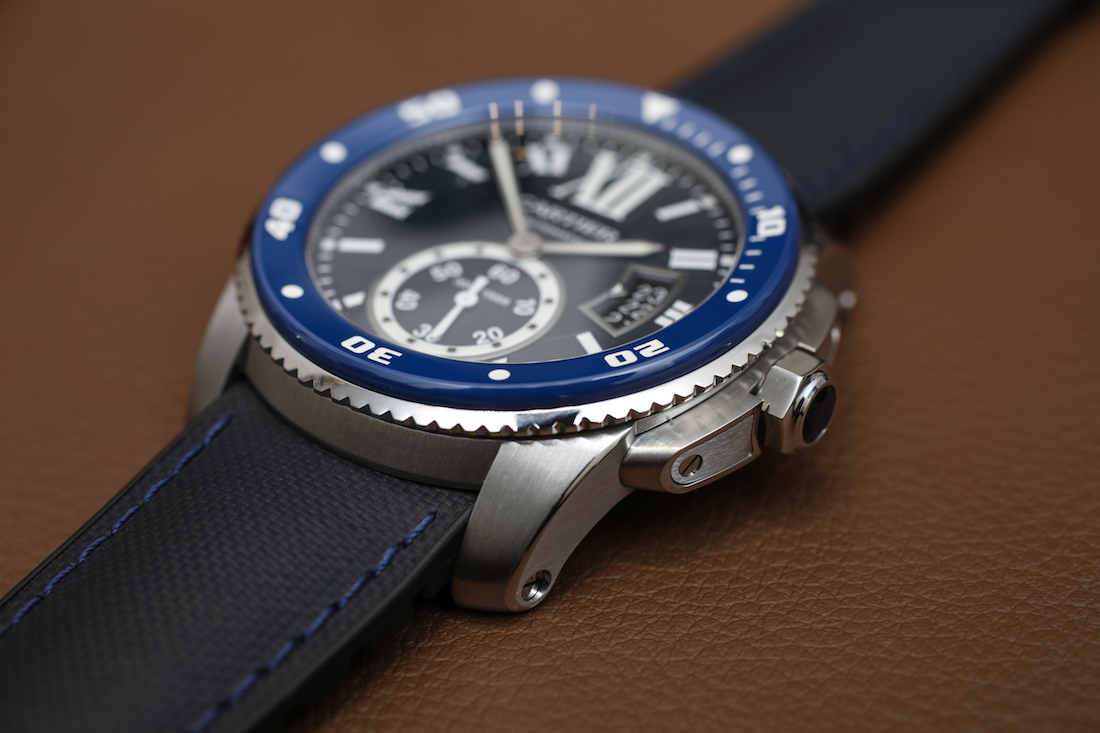 Focusing on the blue, I think it’s a strong addition to the lineup. While the black version is certainly a classic look, I think the blue really suits the nautical feel of the Calibre de Cartier Diver’s aesthetic. The blue is arguably an even stronger suit for the solid gold version. While the two tone has a certain appeal, the full 18k pink gold version really rips the knob off. While I don’t have the wrist to pull off a gold dive watch, I think I get the appeal and there is something wondrously nouveau-riche about the solid gold Calibre de Cartier Diver Blue on a blue rubber strap.

Steel dive watches are tools for the masses, while a gold diver (especially from a brand like Cartier) paints visions of the sun-soaked Amalfi coast, an ever darkening tan, and a teak decked vessel to carry you far away from steel concerns. If this is your life, then this may be your watch. 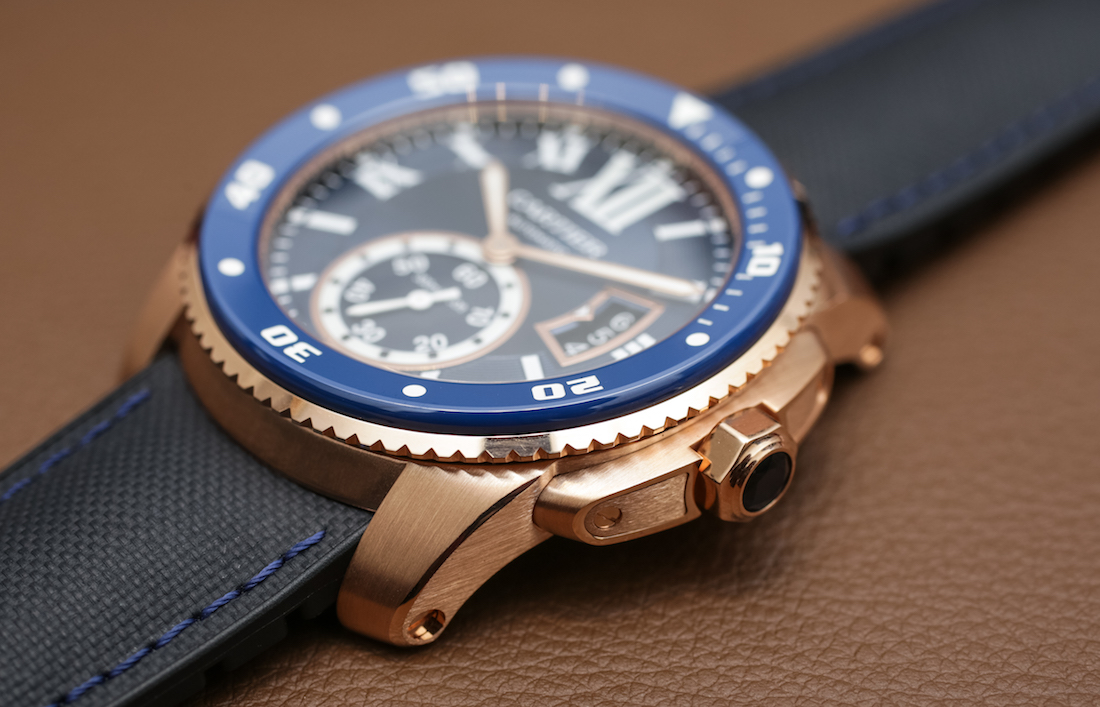 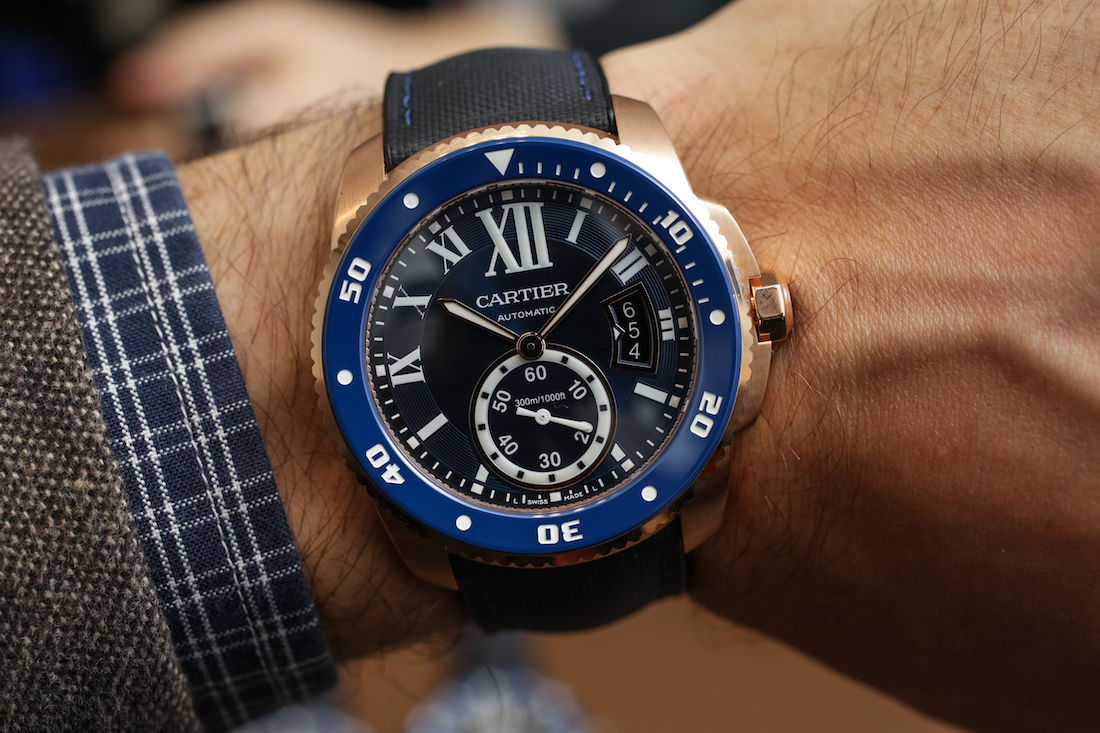 Accepting the possibility that I have digressed, on wrist, the Calibre de Cartier Diver Blue feels special, which is the key element for a watch in this segment (that being, watches that have to battle the mighty Rolex Submariner). The version of the rubber strap shown at SIHH (and in these photos) appears to have been replaced with a blue version of the strap shown in Ariel’s review linked to above. I have tried the current blue strap and it’s excellent; comfy, sporty, and ideal for this sort of watch. Competition is hot at this price point, but I think the Calibre de Cartier Diver, especially in blue, offers its own appeal that is going to be popular among both Cartier fans and also those looking for a change of pace from the standard options from Omega and Rolex. 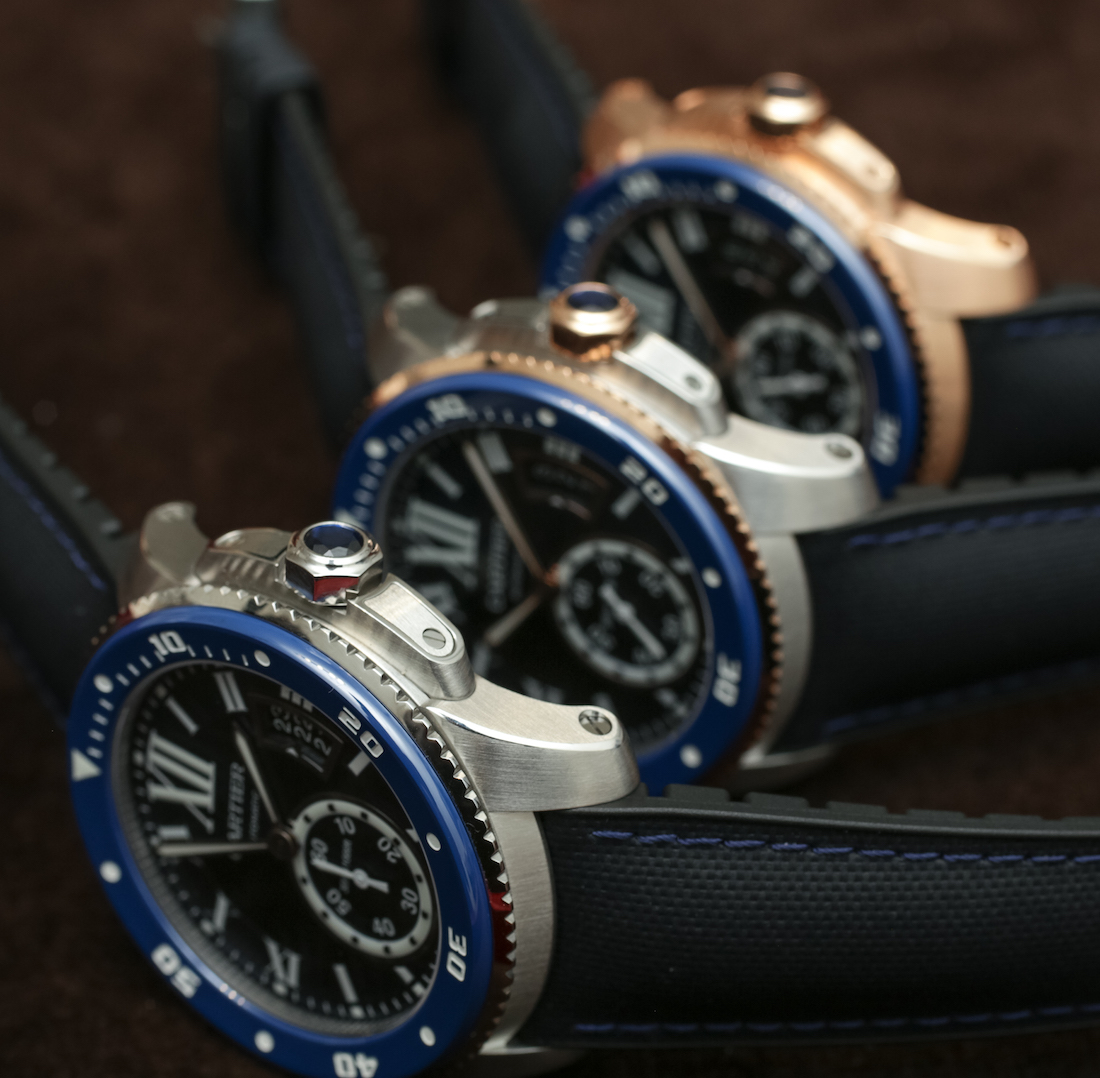 Pricing starts at $7,900 for the steel, $10,200 for the two tone, and $27,300 for the full gold experience. With a lovely case, excellent sizing, and a quality movement, the Cartier Calibre de Cartier Diver Blue adds a little flare to an already interesting and entirely wearable lux diver. cartier.com