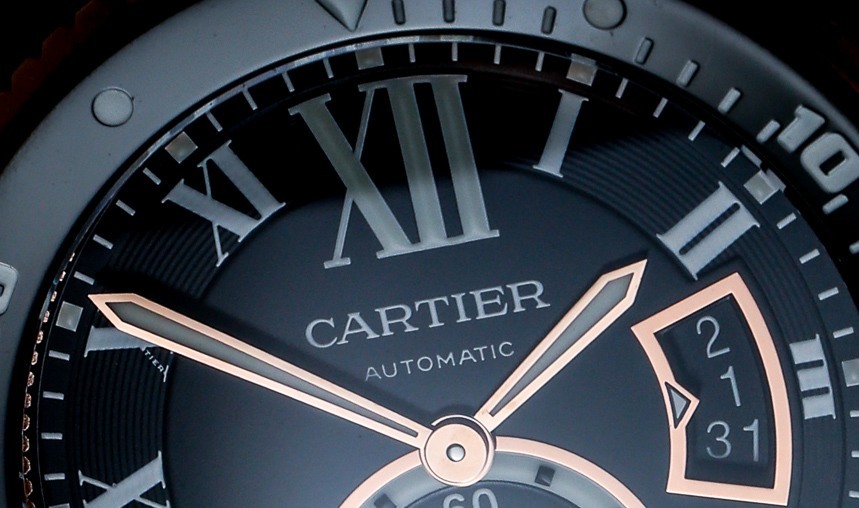 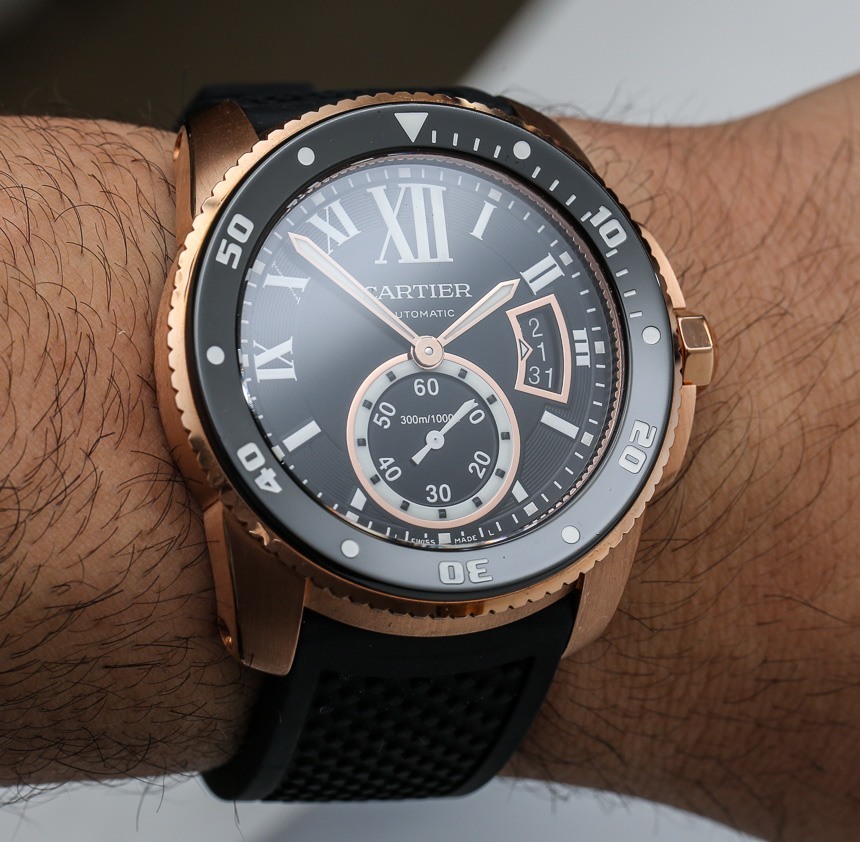 The Cartier Calibre Diver watch combines a high-luxury sense of design and prestige with the presumed durability of a sports watch. It is either? Is it both? Those are good questions, and ones that are okay to ask, given that Cartier has been among the few major luxury watch brands who have been very consistent in making sure that their dressy lifestyle watches for men are almost always founded on sporty principles.

Think about the major Cartier watch collections such as the Santos, Pasha, Roadster, Tank, and Calibre. Of course there are exceptions but these timepieces are at least inspired or themed on things like flying, driving, diving, etc… Yes Cartier has extended these creations into some very high-end spheres of horology, but at their heart they are all basically sport watches in some form or another.

When the original Cartier Calibre watch came out (reviewed here), I was sure to point out the sporty/dress lifestyle nature of the design. Now, with the Calibre Diver (originally debuted here), Cartier takes that sense of sport even further with a version of the Calibre specifically meant for diving. So would you take this Cartier Calibre ref. CRW7100052 (aka W7100052) in solid 18k rose gold diving? Neither would I, but they do offer a steel version if you feel that submerging your Cartier in ocean water is a good idea. So why does the watch exist?

Let’s first start with the premise that most luxury watch brands love the idea of having sport watches, and this is by no means a first for Cartier. This is merely the latest in a long line of high-end timepieces meant to suggest a sporty lifestyle even if the owner’s idea of going diving is just a dip in the pool. Rolex’s Submariner started life as a professional dive watch, but today is something that is so much better made than the original, but also an item that its owners are much more inclined to baby. 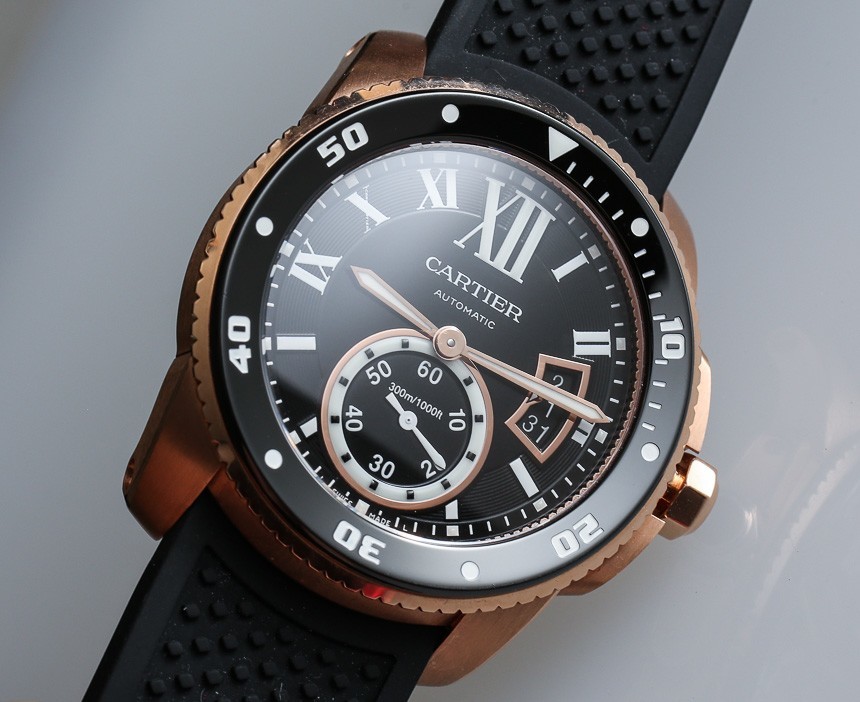 In my opinion, the situation is very similar with the Cartier Calibre Diver. In theory, you have a 300m water resistant dive watch but in reality you have a luxury SUV whose owners aren’t keen to take it off paved roads. As a luxury toy, it is certainly satisfying, especially for those who want to combine high design and maintain a degree of manliness. While you might take a different position on the matter, it is true that most Western men feel that dress watches are too boring to wear on a “casual basis.”

When Cartier officially debuted the Cartier Calibre Diver, aBlogtoWatch went hands-on here, earlier in 2014. There you can see hands-on images of the steel version as well as this 18k rose gold version. Why are we reviewing the gold version when this is meant to be a sports watch? Well, first of all, I think that the black dial mixed with rose gold case is very striking, and second, I feel that since this is a luxury lifestyle sports watch, why not take the luxury element all the way. 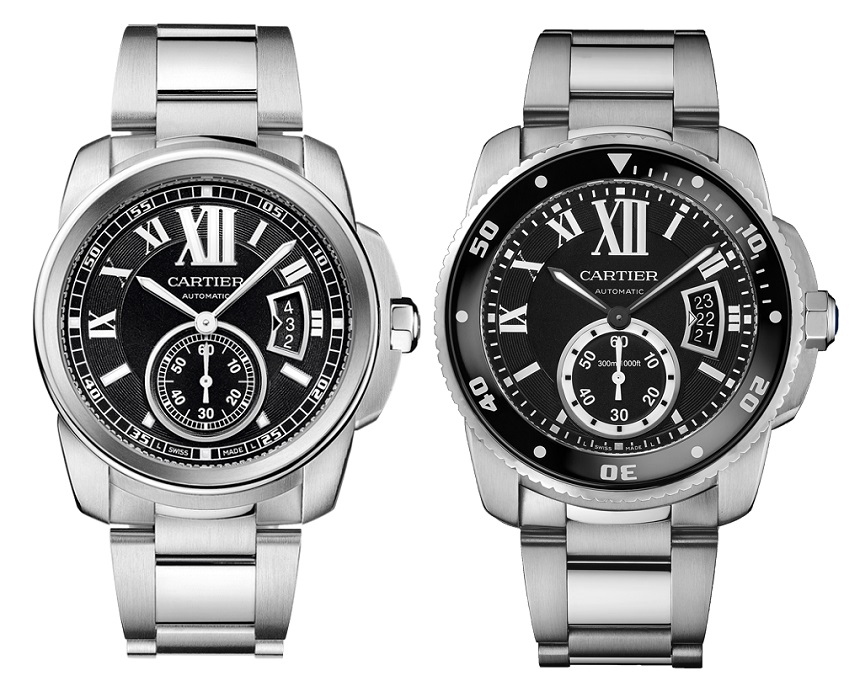 One of the interesting things about the Cartier Calibre Diver is that, in many ways, it is little changed visually from the standard “Calibre de Cartier” timepiece. Even the prices between similar Calibre and Calibre Diver watches aren’t that different. So what are the major differences? It really comes down to two things: the rotating diver’s style bezel and the increase in case water resistance. Otherwise, selecting between the Cartier Calibre and the Calibre Diver is going to be a matter of personal style and preference.

I’ll state right here that in my opinion, the Calibre (the entire collection) is the Cartier men’s watch to get right now. It offers the most modern design of the others, an in-house made movement, great size, and appeal of a Cartier with a sportiness that many people are looking for today. Of course, with my love of dive-style watches, I am inclined to say that the Cartier Calibre Diver is the best choice, but let’s look at the details a bit more. 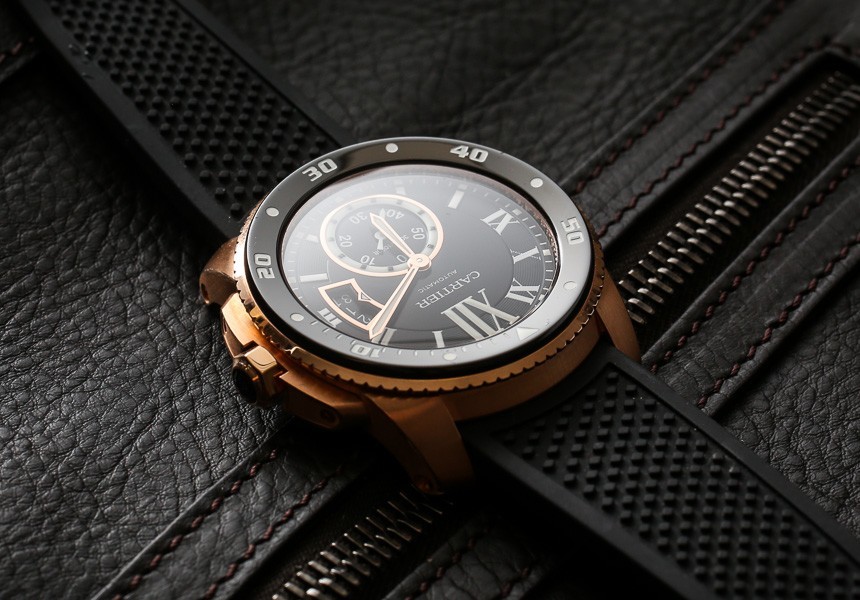 As a fan of rotating diver’s style bezels I welcome the addition of this element to the overall Calibre case design. The inwardly angled and slightly glossy bezel is produced from aDLC coated steel, which makes it rather scratch resistant and offers a slightly different look than the ceramic bezels you frequently see today. Ceramic bezels are often flat or very angular, and the bezel here on the Calibre Diver is done with slightly softer edges that I like. 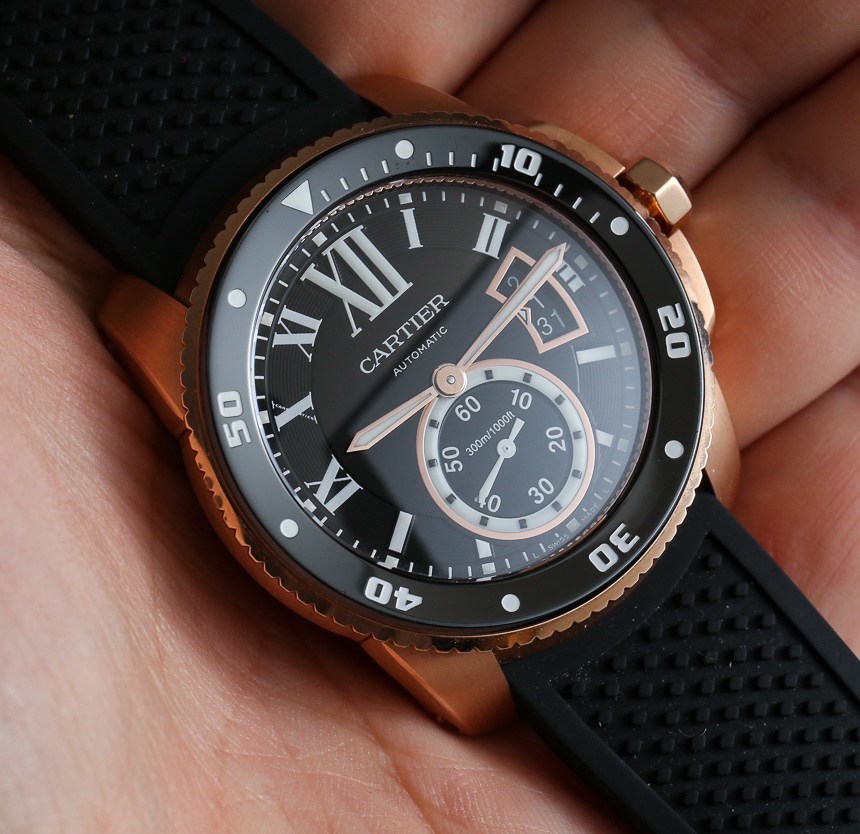 One of my major complaints about the original Cartier Calibre watch was the relatively poor level of water resistance at just 30 meters. I would have been happy with 100 meters given the sport watch theme, but 30 meters is the same as most highly delicate dress watches. It wasn’t a number I was particularly happy with. As I’ve said the Calibre Diver offers 300 meters, so what did Cartier change?

To be honest, I don’t know all of the changes, but most people won’t be able to tell, which means the Diver might be a better option for many looking for something with sporty performance to match sport looks in a high-end watch. The Cartier Calibre Diver has a solid versus exhibition caseback, a screw-down crown, and just one extra millimeter of case thickness. That is all to go from 30 to 300 meters of water resistance. The original Calibre has a 10mm thick case and the Calibre Diver is just about 11mm in thickness. Many brands even refer to 11mm as an “ultra thin watch.”

I may have mentioned this in the past, but I really like the idea of thin dive watches (even though I rather ironically also like the idea of very thick dive watches). At 42mm wide and 11mm thick, the Calibre Diver wears very nicely on the wrist with an admirable width and a very svelte profile for a dive watches. 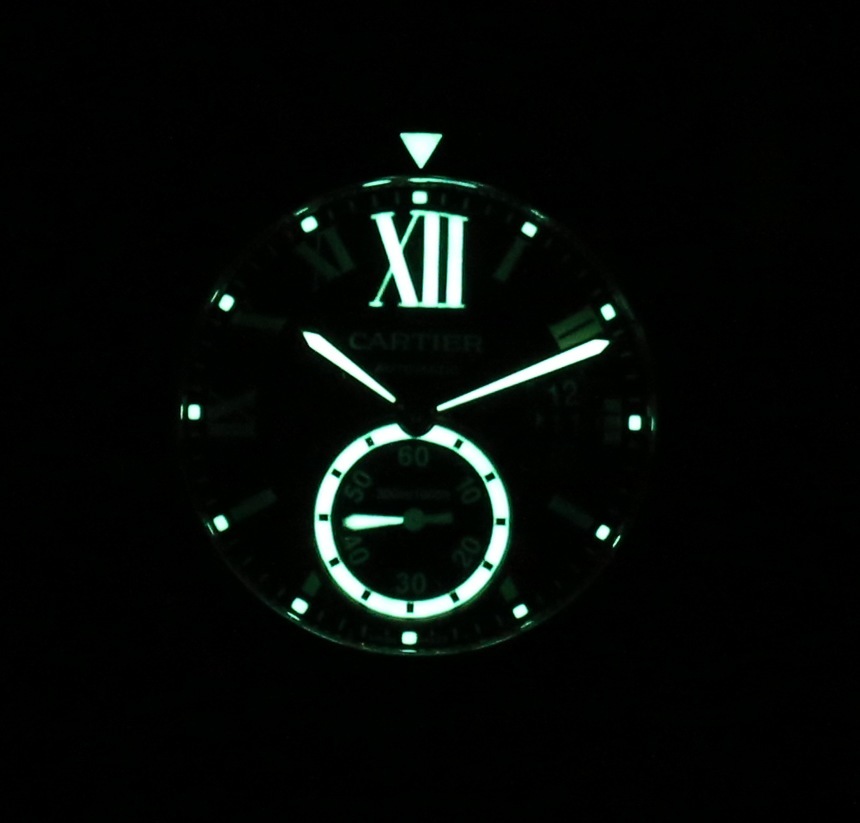 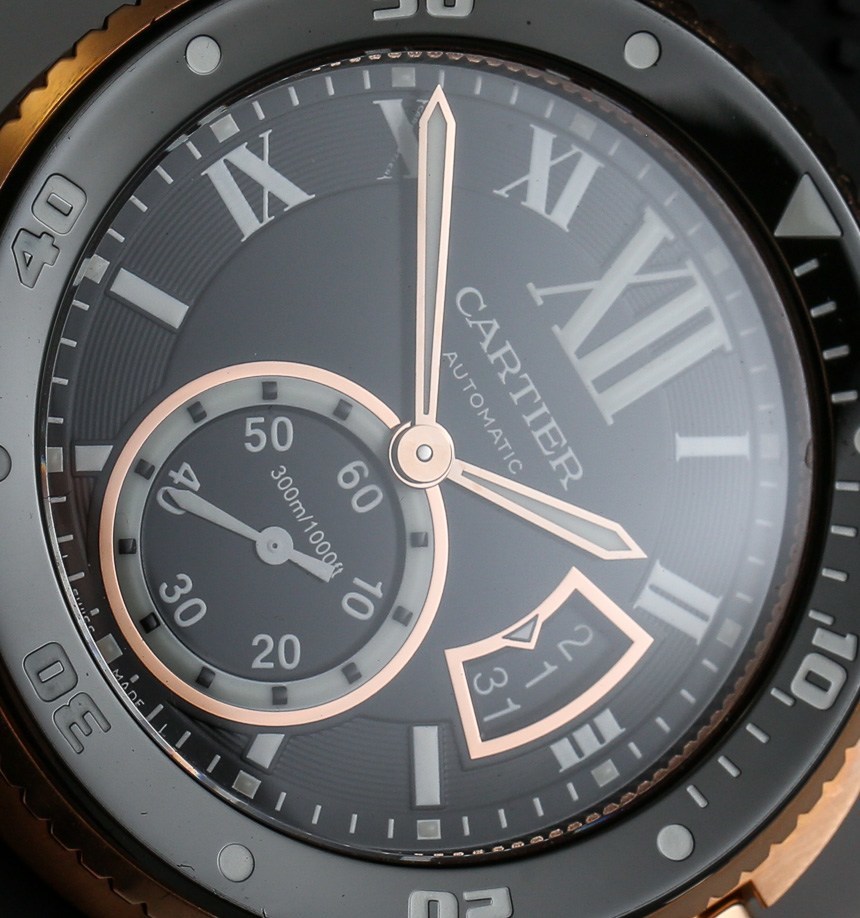 How thin is 11mm for a dive watch?  Very thin actually. Let’s compare a bit. My Rolex Submariner 114060 is about 12.75mm thick, while a modern Omega Seamaster Planet Ocean with an 8500 movement is just under 16mm thick. So as you can see, the Cartier Calibre Diver has them beat by a good margin. Of course, the Omega offers twice the water resistance at 600 meters, but since it is a popular watch, I thought it was useful to compare in order to offer some perspective on how thin the Calibre Diver will be on your wrist. 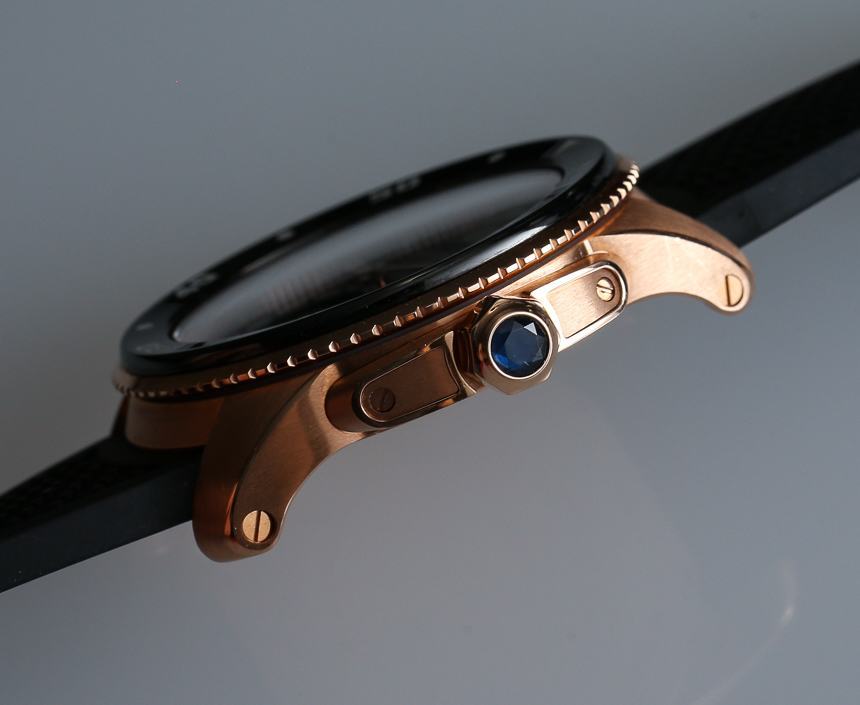 The finishing on the Calibre case has always been impressive and that is no different on the Cartier Calibre Diver. Most of the case is brushed but there are finely beveled edges that greatly add to the overall appeal. On the crown side of the watch, the thin polished lines around the crown guard are lovely, and help frame the typical sapphire crystal cabochon in the crown. It looks black actually, but in the light you can see that the cabochon is in fact deep blue. I think Cartier did this on purpose to help it match the black tones of the watch.

On the dial, you see a few changes compared to the standard Cartier Calibre. At first glance, they look the same, but looking at them side by side, you can see a redesigned minute track, subsidiary seconds dial, and increased amount of lume. It isn’t that one is more attractive than the other, but it is important to be aware of the differences. Each is quite legible and offers that half Roman numerals and half baton hour markers style dial.